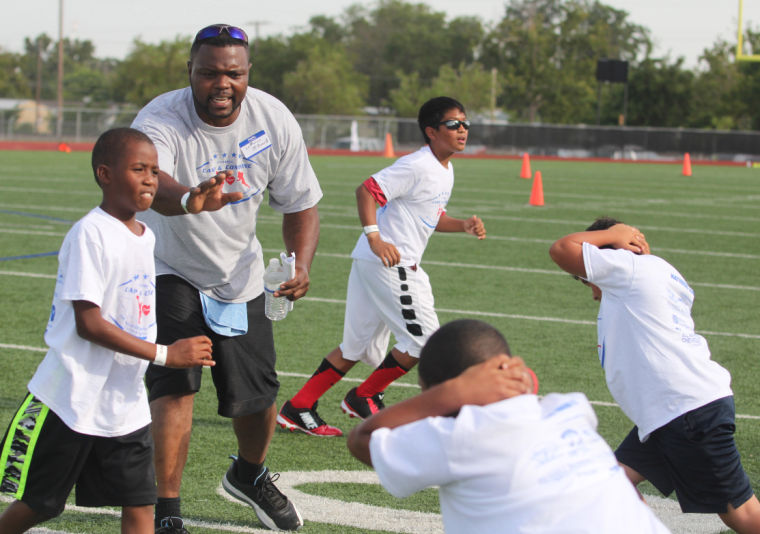 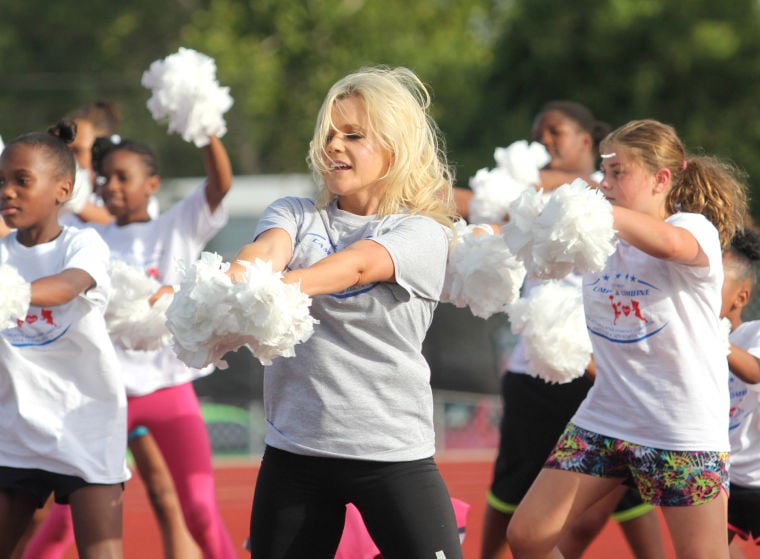 While the sports world was focusing on a return home that was taking place with LeBron James, current and former NFL stars enjoyed their own homecoming on Friday.

Former area standouts Roy Miller, Tommie Harris, Johnny “Lam” Jones, Brandon Joiner and Juaquin Iglesias were among a group of coaches that returned to Killeen to help out at the 5th Annual Cen-Tex Football/Cheer Camp and Combine at Leo Buckley Stadium.

“It’s always exciting just to give back,” Miller said. “You just don’t get it anywhere else. It’s exciting for us because we’re from this area and we just want to give the kids something that we were never able to get growing up.”

The camp kicked off on Friday afternoon and continues this morning. This year’s camp has 300 total football players and 50 total cheerleaders and slots have been taken up for the last month.

Miller has helped out with the camp since its inception and has seen it grow from 40 the first year to more than 300 in 2014.

For him, the credit goes to the community and volunteers.

“It’s all of these people that continue to come out and show support that make this thing happen,” Miller said.

Miller was a two-time all-state and three-time all-district performer at Shoemaker. He went on to play for Texas where he helped the Longhorns win the 2005 BCS National Championship, and earned Fiesta Bowl Defensive MVP honors in his final collegiate game.

Miller is entering his sixth NFL season and second with the Jaguars.

The Cincinnati Bengals open training camp in less than two weeks, but linebacker Brandon Joiner was already out and ready for football.

“I love every moment of it,” Joiner said. “Just to get a chance to come out here and see these kids run around and enjoying football on a nice, hot summer day. Just teaching them little things and plant some seeds that can grow later on in life that they can use. It’s an amazing feeling, I love it.”

Harris, a former Ellison and University of Oklahoma standout, spent eight seasons with the Chicago Bears and one with San Diego. He was a part of the Bears team that won the NFC title and made it to Super Bowl XLI.

Harris announced his retirement last month and for him, giving back to the kids in the community where everything got started was a must.

“When you make it out to the league, it’s your job to come out and be a part of the hometown pros,” Harris said. “You never can retire from giving so that’s one thing you can do.”

Jones was in attendance watching kids and coaches and helping out at the camp.

“It’s always important to give back to the kids and help them along the way,” Jones said. “I’m just enjoying it, these guys are doing all of the work, I just kind of showed up.”

“When we were coming up, they didn’t have these type of camps. You still had people trying to work with you and help you, but it’s a lot more organized now.”

In 1976, he helped the Lampasas 400-meter relay team win the UIL Class 3A state championship and was a part of the U.S. Olympic gold medal team in the same event.

For Iglesias, the camp didn’t just offer a chance to help the kids, but also an opportunity to experience some nostalgia from his time as a Killeen Kangaroo.

But it wasn’t all routes, passes and fake outs at Buckley Stadium. Traci (Curb) Tipping and Chrislyn Herring were showing aspiring cheerleaders some dance moves at the cheerleading portion of the camp.

Herring now resides in Los Angeles, but had fun working with younger kids in her hometown.

“It’s good being back with friends and family,” Herring said. “I love L.A., too, but this is home.”

Tipping is a 1999 graduate of Killeen High and a former Dallas Cowboys cheerleader while Herring is a 2007 Ellison graduate and former Oakland Raiderette.

It is the second year that cheerleading was a part of the camp and for them, coming home and helping was just as gratifying.

“It was a lot of fun to come out and give back to community and to see the girls’ faces light up,” Tipping said about her experience last year.

“They got to actually perform out in the football field and I think they had a really great time.”

Johnny “Lam” Jones is not sure where his services will be needed, but he knows where they will not be required.