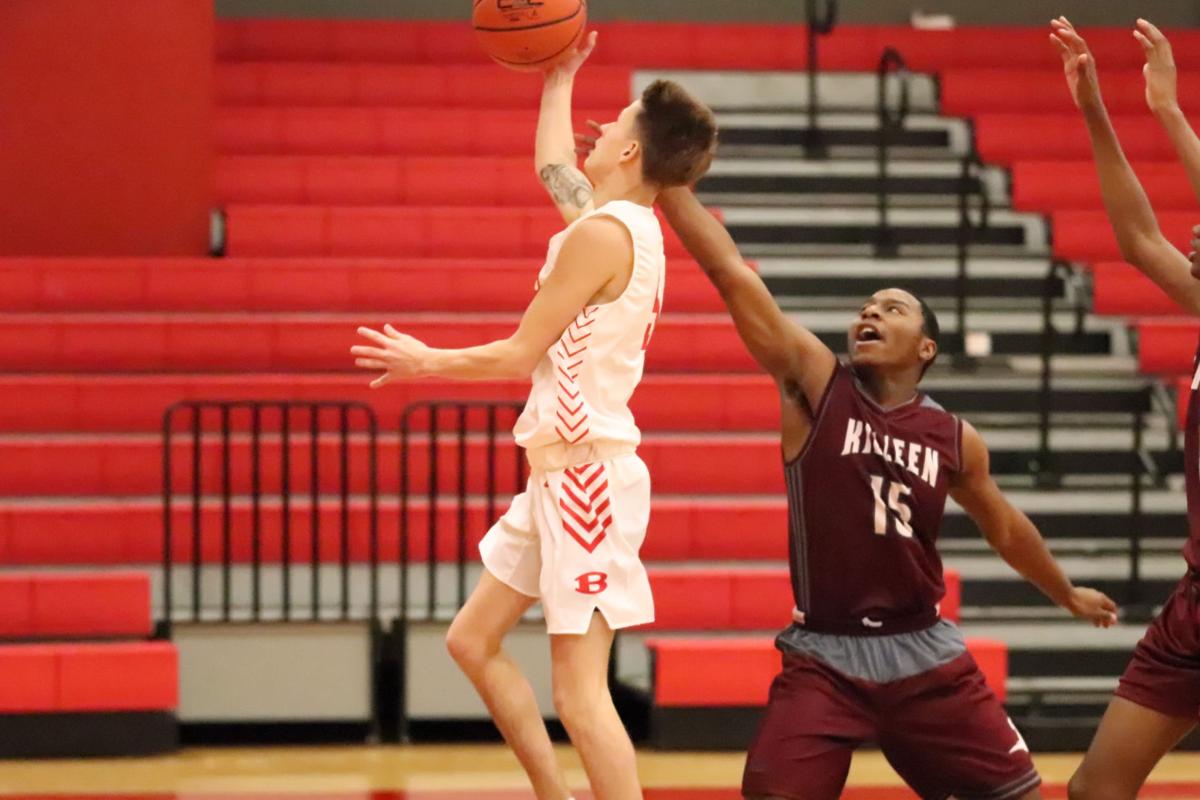 Belton's Austin Aggers shoots a layup while being defended by Killeen's Chase Atkins on Tuesday in Belton. 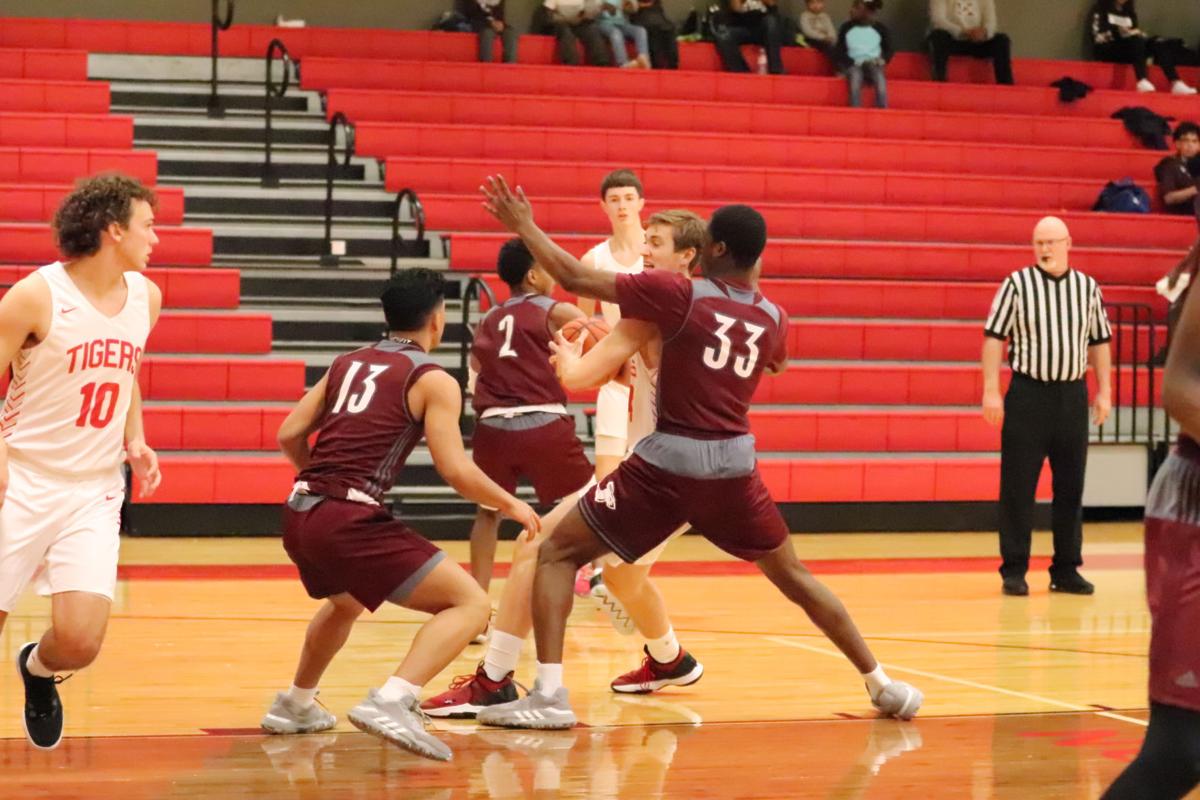 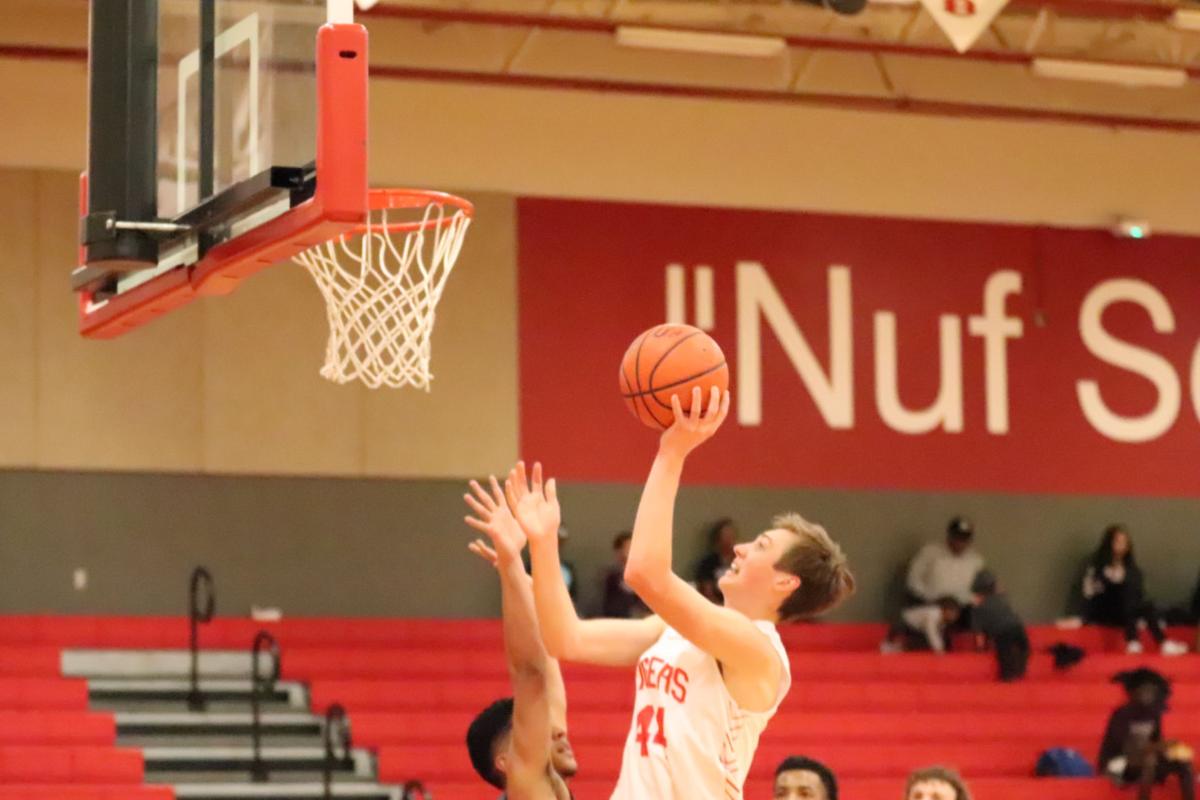 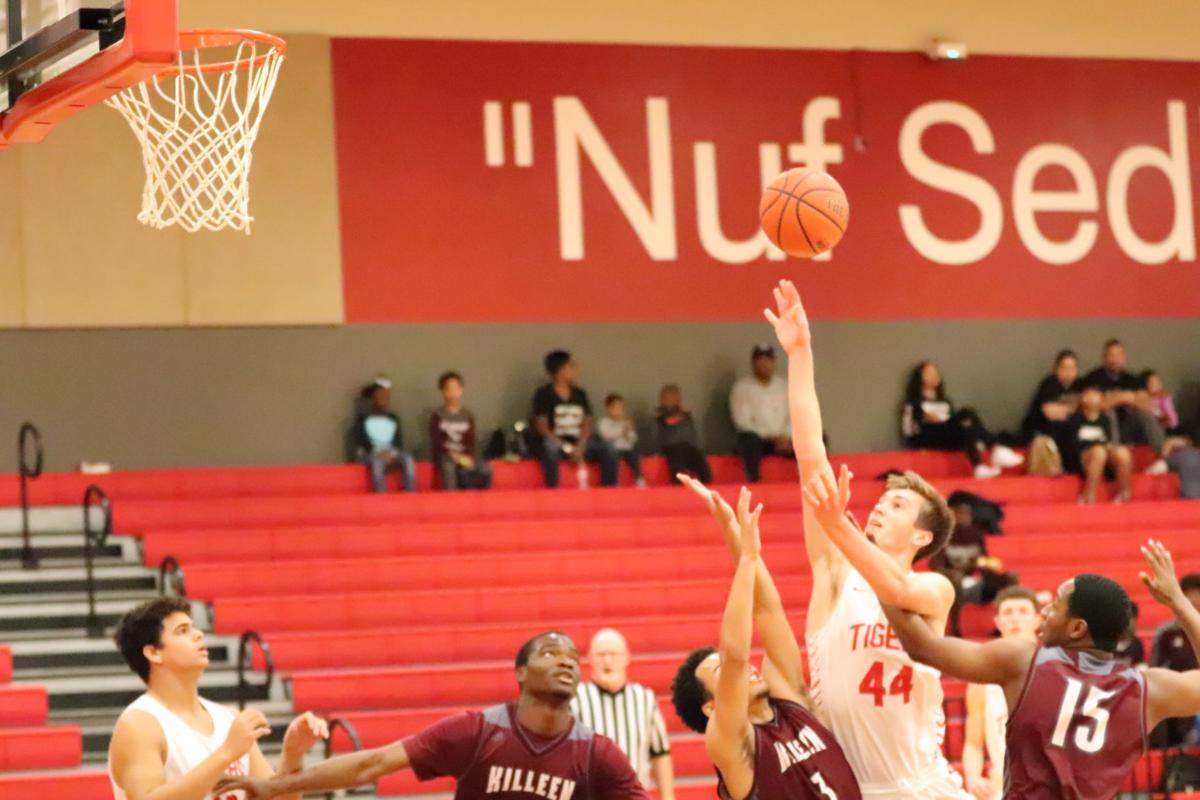 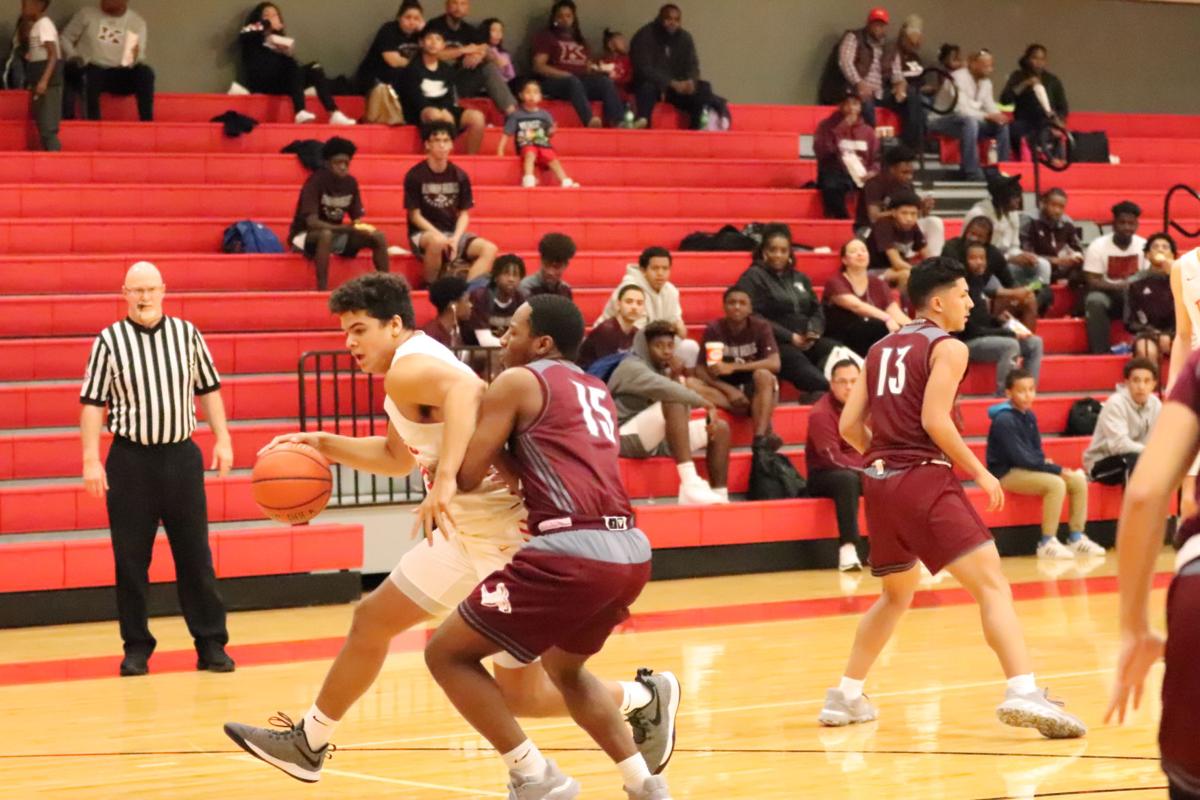 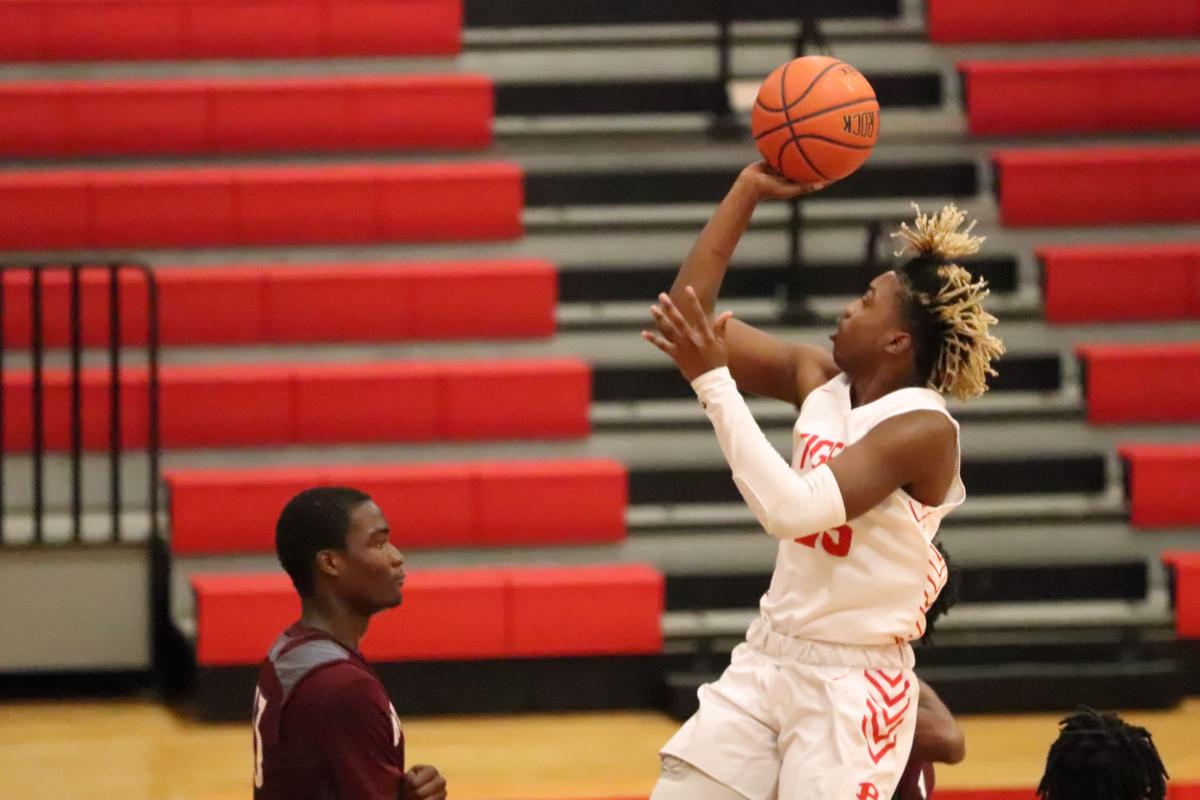 Belton's Mikal Kerley puts up an uncontested shot in the paint against Killeen on Tuesday in Belton. 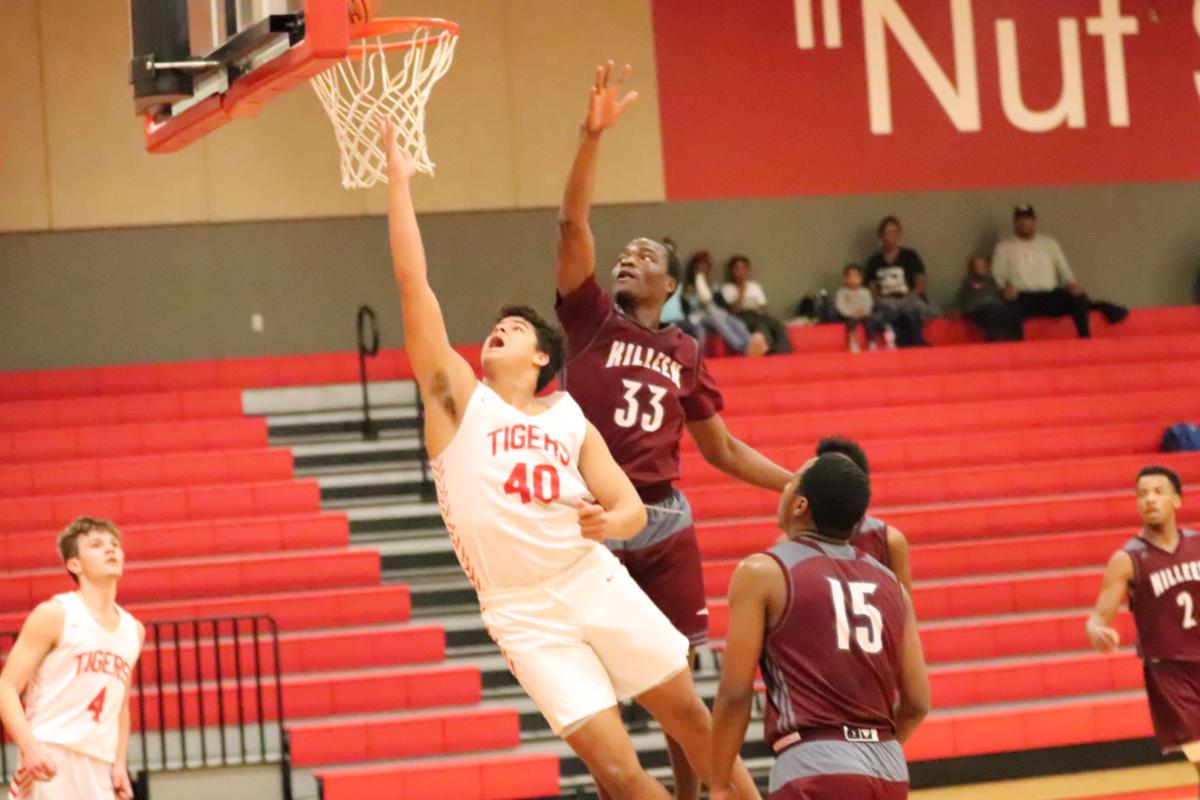 Belton's Eddie Henry (40) shoots a layup while being defended by Killeen's AB Oladipo (33) on Tuesday in Belton. 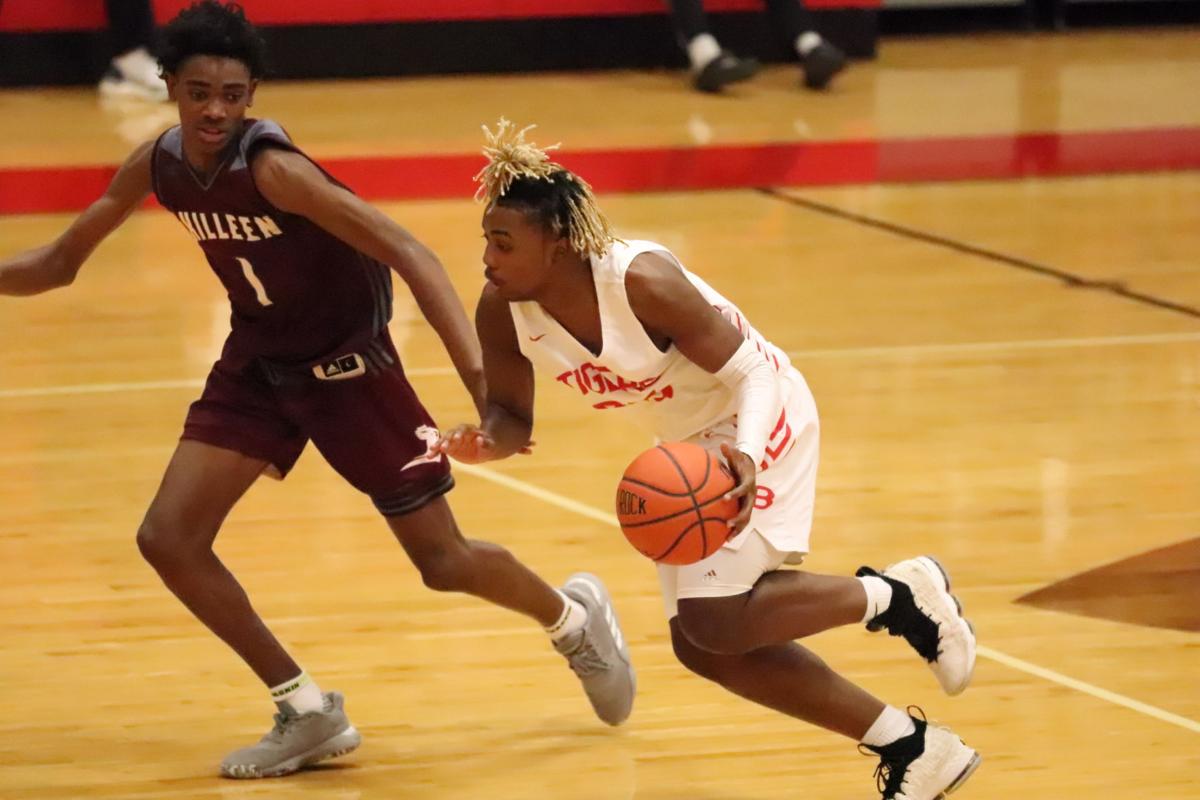 Belton's Austin Aggers shoots a layup while being defended by Killeen's Chase Atkins on Tuesday in Belton.

Belton's Mikal Kerley puts up an uncontested shot in the paint against Killeen on Tuesday in Belton.

Belton's Eddie Henry (40) shoots a layup while being defended by Killeen's AB Oladipo (33) on Tuesday in Belton.

Tyson Pine hit both free technical free throws at the end of the fourth quarter to preserve a bizarre 60-58 win for the Belton Tigers over the Killeen Kangaroos in a District 12-6A contest Tuesday afternoon at Tiger Gym.

“Good things happen when you keep your composure,” Belton coach Jason Fossett said. “The kids kept their composure and did what they needed to do there at the end.”

But the Roos thought they, too, had done what they needed to do at the end.

After Killeen’s Chase Atkins drained a 3 to cut the lead to 58-56 with 10 seconds to play, the Roos quickly fouled TJ Johnson on the inbounds pass. Johnson failed to make the front end of a bonus free throw, giving the Roos the ball back with 8.1 seconds left and a shot for the win.

The Roos got the ball to De’Marco Blas in the left corner for what they thought was a game-winning 3-point shot.

“I immediately saw the corner official signal two,” Fossett said. “The other two gave the 3 signal, but I saw him give the 2 so I knew they were going to at least talk about it. ... Then mass hysteria broke out.”

The “mass hysteria” involved Killeen coach Reggie Huggins being assessed a technical foul during his disagreement with the call.

“I thought it was a 3 in the end,” Huggins said. “They said it was a 2. They gave me a technical and still nobody in the world knows why.”

The technical allowed Pine to hit two free throws and allowed the Tigers (17-6, 1-2) to hold on for the victory.

“I was like ‘A technical for that?’ I asked the other referee ‘are we going to end the game that both teams have earned and warranted overtime on that?’”

The Roos (6-10, 0-4), who led 1-0 thanks to a technical free throw to start the game assessed for a pre-game dunk by Belton, had to fight just to be in that position, trailing 24-7 at the end of the opening quarter, thanks to a barrage of early 3s by the Tigers.

But late in the quarter, Johnson came out of the game with an injury, giving the Roos their chance to come back.

Johnson, who sat out the second and third, knew he could no longer just be a spectator and told his coach he wanted back in.

“I hurt pretty bad,” Johnson said “I obviously didn’t want the coaches or trainer to know. But I knew I had to suck it up help the team get a win. This was a big win.”

Johnson wasn’t as quick or as athletic as he normally is during the fourth, but he was able to draw a charge, bring in some critical rebounds and score six of his 15 points in the quarter.

“Our game plan changed when your best player isn’t on the floor,” Fossett said. “That was the first time this year we had played meaningful basketball with TJ not being in the game. Other guys stepped up and this was a great team win.”

BELTON — No matter how many times the Waco Lions got close to tying the score, T.J. Johnson was there to give the Belton Tigers exactly what t…