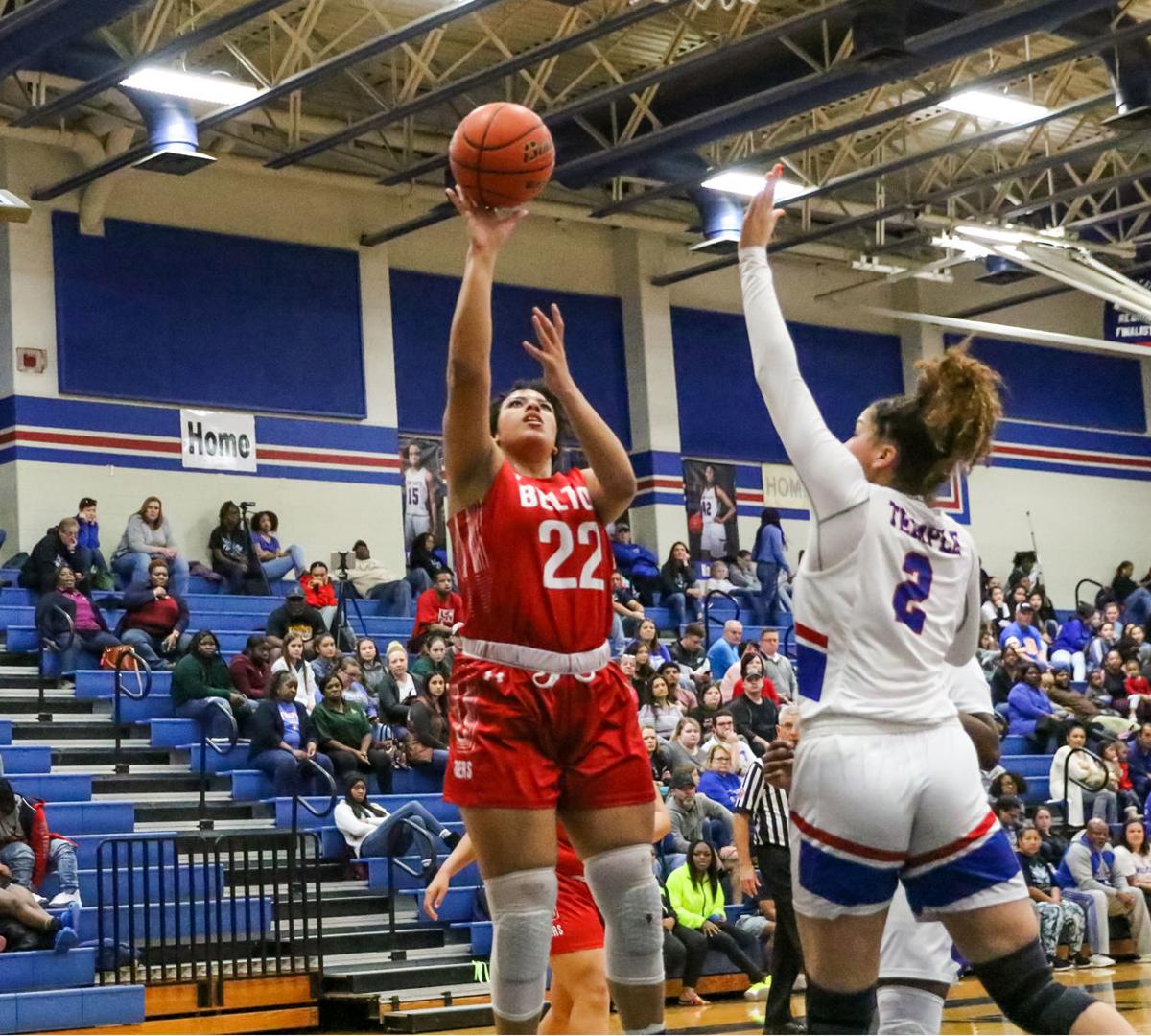 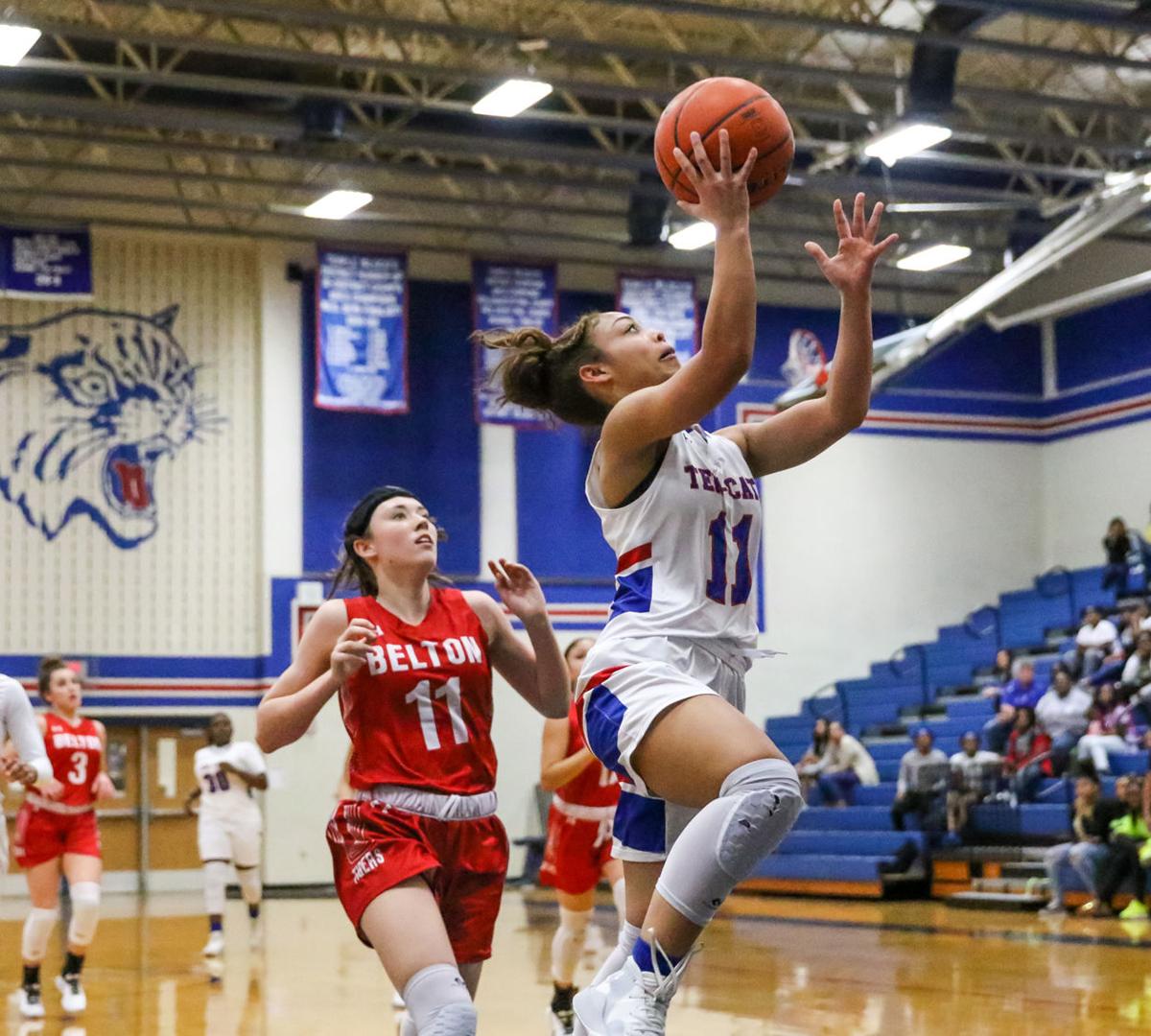 Temple’s Taliyah Johnson (11) finishes a fast break with a layup as Belton’s McKenna Maddux follows the play on Friday in Temple.

Temple’s Taliyah Johnson (11) finishes a fast break with a layup as Belton’s McKenna Maddux follows the play on Friday in Temple.

TEMPLE — While the Temple Tem-Cats had stretches where they didn’t shoot well, they did at critical times to keep a game Belton team from getting a foothold on the lead.

Taliyah Johnson pumped in 10 of her game-high 12 points in the second half to propel the Tem-Cats to a 42-32 victory over the Lady Tigers to complete a series sweep of Belton in District 12-6A plus another in a nondistrict tournament game.

The Tem-Cats, 19-11 overall and 6-5 in district, remain firmly in the thick of the race for a playoff berth with five games remaining. Belton dips to 11-21 overall and 3-9 in district.

“We didn’t shoot very well in the first half,” said Temple coach RaShonta LeBlanc. “We became a lot more patient with the ball and taking the right shots.”

Temple carried a narrow 20-19 lead into halftime and managed to create some cushion between itself and the Lady Tigers in the pivotal third quarter. Aniah Hall and Haleigh Johnson connected on inside buckets to set the early pace in the second half.

Belton’s Karina Fisher connected on a 3-pointer and McKenna Maddux hit a free throw as the Lady Tigers were within two, 25-23, of the Tem-Cats at the 5:15 mark of the quarter. Those would be the only points the Lady Tigers would get the rest of the frame.

In the meantime, Johnson hit two treys from the key in the final three minutes sandwiched around a jumper from the corner from Aaliyah Thomas to give the Tem-Cats a 33-23 advantage going into the fourth quarter.

“It took some confidence to take the shots that Taliyah made,” LeBlanc said. “Those were two good shots.”

Belton surged a bit to start the fourth quarter with Alexis Wade scoring on a putback and Nylah Modeste hitting a jumper to cut the Tem-Cats’ lead to six, 33-27.

The Tem-Cats answered by scoring on four successive possessions as Johnson hit a free throw and a two-point from the corner along with a Wilashia Burleson free throw and Thomas bucket while Belton added a Modeste bucket during that stretch to make it a 10-point game, 39-29 with 3:40 to play.

Belton managed to get the game back within seven behind a layup from Modeste and free throw by Lillian Small with 1:28 left. That would be as close as it would get as Thomas, Burleson, Hall and Johnson combined for four free throws in the last 1:06 to ice the game.

“We stayed within our game plan because we knew they would stay within theirs,” said LeBlanc.

The Tem-Cats enjoyed a productive 16-point first quarter led by a pair of treys from Thomas and six points from Burleson to go up 16-11. Wade did most of the offensive damage early for the Lady Tigers with six points in the first frame.

Belton outscored Temple 8-4 in the second quarter and briefly took the lead. A 3-pointer by Modeste tied the game, 18-18, at the 1:52 mark and Anna Beamsderfer added a free throw for a 19-18 advantage with 19 second left in the half. Hall got inside for a basket just before the buzzer to give the Tem-Cats the one-point halftime lead.

Temple will be on the road to face Killeen on Tuesday before returning home against Ellison on Friday in a push toward a possible playoff berth.

“We still control our own destiny,” LeBlanc said. “We’re getting better every day and that’s all you can.”

For most of their contest Friday night, the Temple Lady Wildcats did not play like a team that had just one win to its name this season. While…