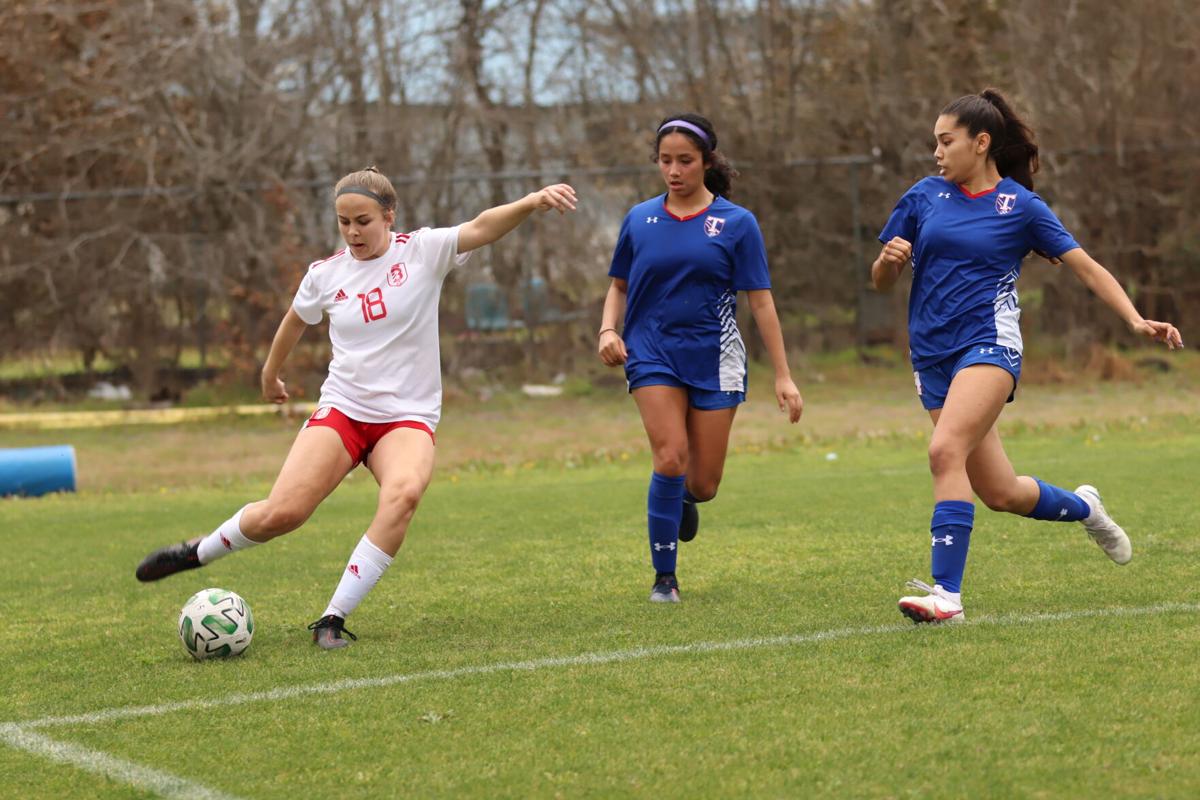 Belton's Makenna Morrow (18) attempts to pass to a teammates while defended by Temple's Citlally Hernandes Castillo (17) and Angelica Deluna on Saurday in Temple. 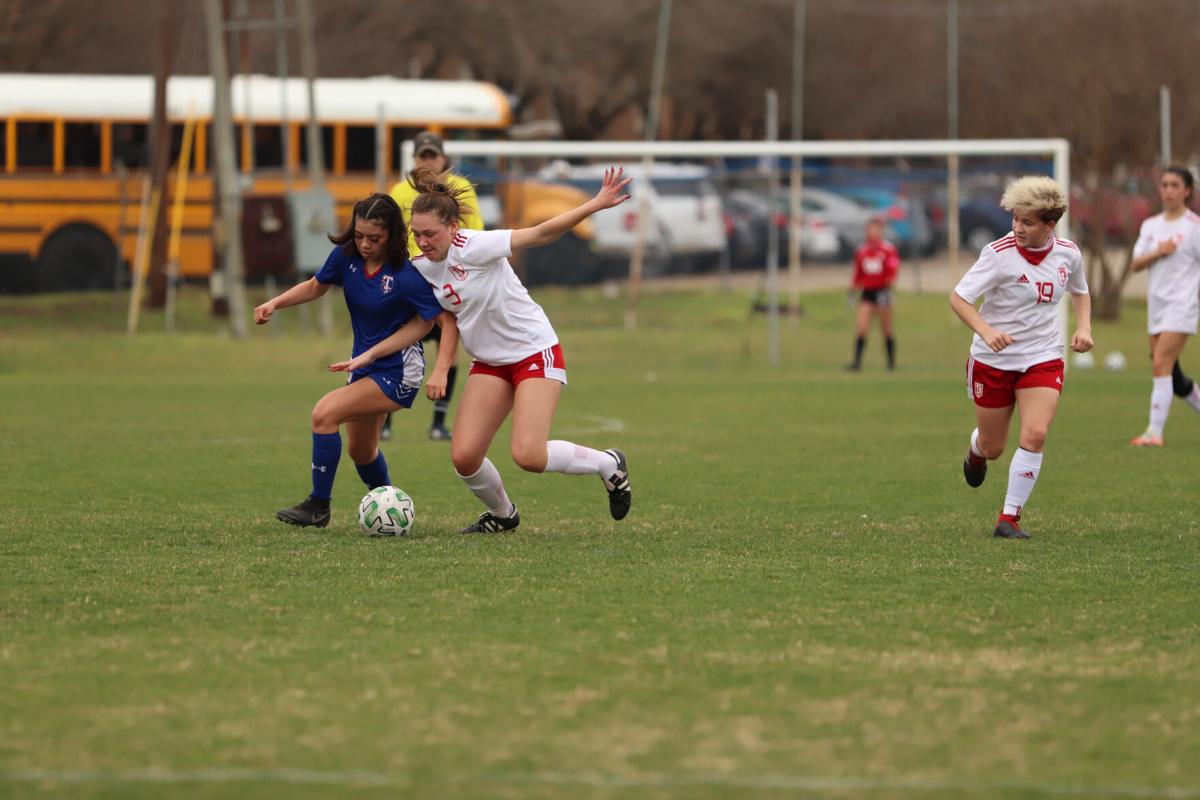 Belton's Kirsten Bush tries to control the ball while being defended by Temple's Nadia Mireles on Saturday in Temple. 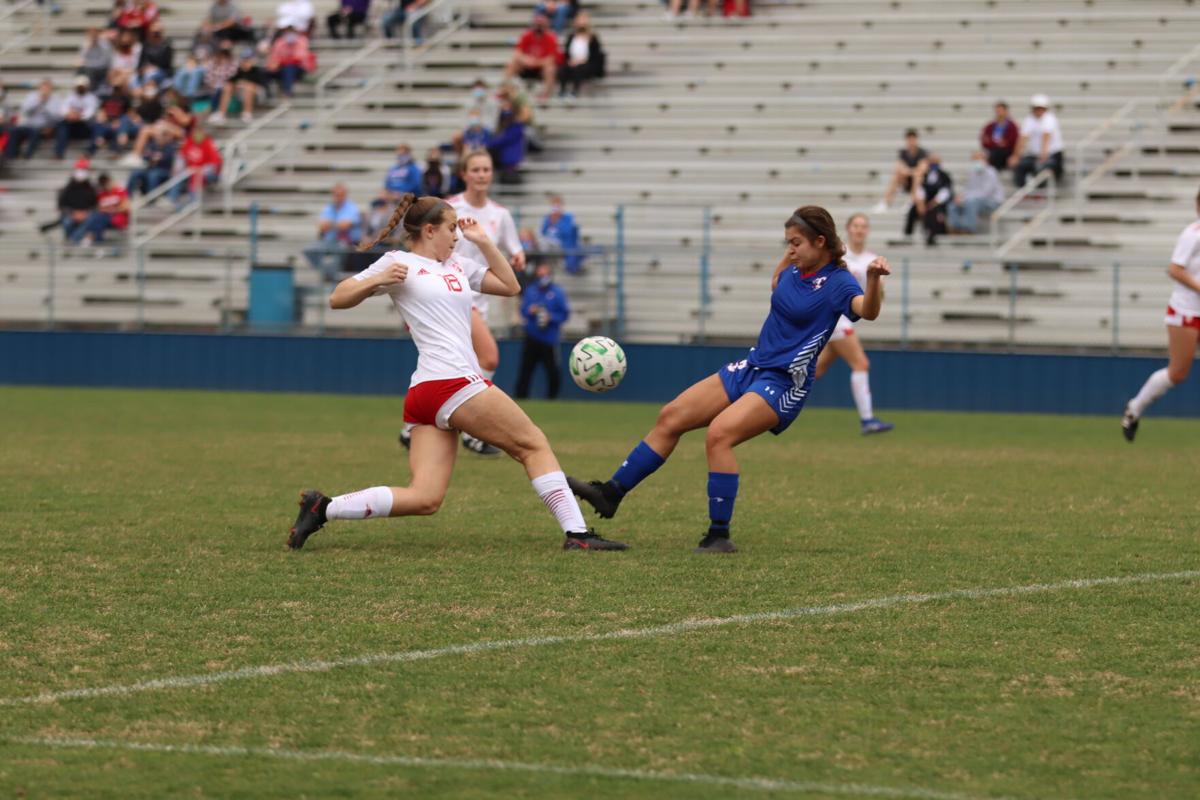 Belton's Makenna Morrow (18) and Temple's Emily Diaz vie for control of the ball Saturday in Temple. 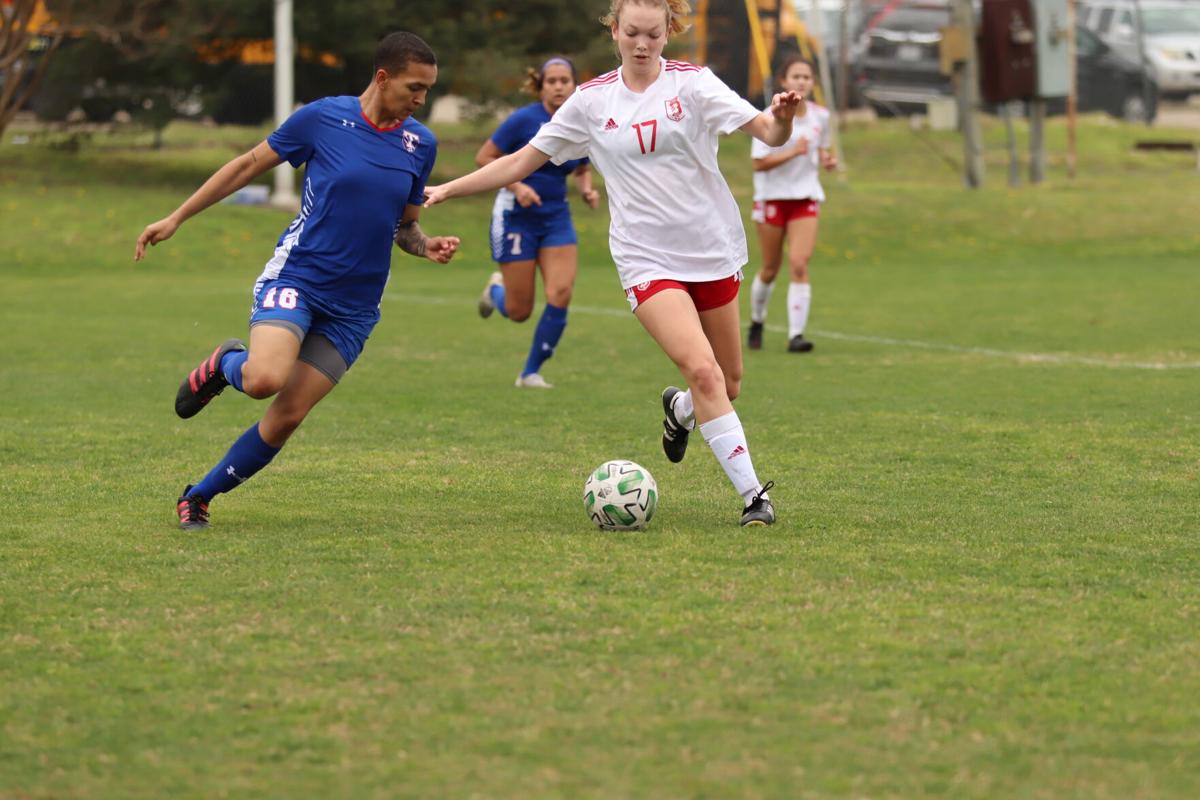 Belton's Allie Angell (17) is defended by Temple's Isabella Mayfield in front of the Temple goal on Saturday in Temple.

Belton's Makenna Morrow (18) attempts to pass to a teammates while defended by Temple's Citlally Hernandes Castillo (17) and Angelica Deluna on Saurday in Temple.

Belton's Kirsten Bush tries to control the ball while being defended by Temple's Nadia Mireles on Saturday in Temple.

Belton's Makenna Morrow (18) and Temple's Emily Diaz vie for control of the ball Saturday in Temple.

Belton's Allie Angell (17) is defended by Temple's Isabella Mayfield in front of the Temple goal on Saturday in Temple.

TEMPLE — Cruising down the home stretch of the regular season and with an inevitable playoff qualification sitting neatly on the horizon, Belton head coach Oscar Bersoza felt his team — which has skillfully run rampant through District 12-6A — needed to experience a bit of on-the-field adversity.

Temple coach Sylvester Jallah, meanwhile, wanted to see the Tem-Cats, who are in the act of trying to solidify a top-four league finish, continue to play to their capabilities.

Kirsten Bush’s volley from close range at the end of Abby Cargile’s cross into the penalty box with 6 minutes remaining in regulation lifted the Lady Tigers to a 2-1 victory over the Tem-Cats, who, despite a lack of possession, pestered and pressured Belton into its narrowest 12-6A result this season.

“Honestly, I hate to say this, but we have to start thinking postseason. So this is a pivot for us. We definitely needed this game. It’s what we needed,” Bersoza said. “We haven’t had to play with a sense of urgency. We haven’t had to claw yet. In the postseason, the teams we’ll play are doing that every Tuesday and Friday. The frustration, the urgency, the anxiety is what we needed.”

The Lady Tigers (14-2-2, 10-0) entered Saturday’s game, which had been postponed from Feb. 19 because of the recent winter storm and was the second in as many days and third this week for both teams, with a 78-1 district goal differential.

The tightest result prior was when Belton hosted Temple on Jan. 26 and won 5-0.

“I told them (after the game), Temple did what they do well. Three of the last four games we’ve had with them, that’s how it’s been,” Bersoza added. “The last one was sort of an anomaly.”

The double goose egg just set the table for a back-and-forth second half.

The two Lady Tigers who manufactured the eventual game-winner linked up for the day’s first goal in the 55th minute when Bush’s offering from the right skipped across the front of Temple’s net to the far post where Cargile waited then finished past Tem-Cats goalkeeper Grace Mungia.

The lead lasted about 8 minutes until Mungia sent a soaring goal kick into the run of Ariana Jones, who beat her defender to the bouncing ball then ripped a right-footed shot by hard-charging Belton goalie Katelyn Chrisman for the 1-all tie in the 63rd.

“I’m just trying to make sure we play to the best of our ability each time because if we do that, the other stuff will come. We try to make sure our girls are 100 percent every time. They did more than that today, after we played yesterday,” said Jallah, whose Tem-Cats (5-6-3, 4-4-2) dropped their third one-goal game in district action. “They worked together, which was very important in all aspects of it. Playing back to back like that, I think our legs were dead tired toward the end. But, Belton also is a really good team. We know what they’re capable of, so we tried to make sure we didn’t leave any holes.”

The Lady Tigers thought they had a second tally about a minute later but Sara Navarro’s goal in traffic was waved off after the assistant referee signaled for offside. The game-winner did arrive 10 minutes later when Cargile’s cross found Bush for 2-1.

“I told them at halftime it was going to take something special from somebody, and (Cargile and Bush) do it quite frequently when one’s assisting and one’s on the receiving end,” Bersoza said. “Abby does what she does well and Kirsten is a predator in the box.”

The Lady Tigers held most of the possession during the first 40 minutes but all the time spent in the Tem-Cats’ defensive half yielded nothing more than six shots on goal and a few others that missed the mark thanks in part to Mungia’s six saves and the defense in front of her.

Mungia finished with eight saves and the assist on Jones’ goal, which almost pushed the proceedings into overtime.

“They did an excellent job today. They did outstanding. I couldn’t be more proud of them,” Mungia said of Temple’s players along the back line and in midfield who seemed to be in the right spot at the right time all afternoon. “They showed out today and gave 110 percent.”

Both squads have four regular-season matches remaining. Temple’s upcoming week includes a visit to Harker Heights and a visit from Killeen while Belton travels to Bryan and hosts Shoemaker.