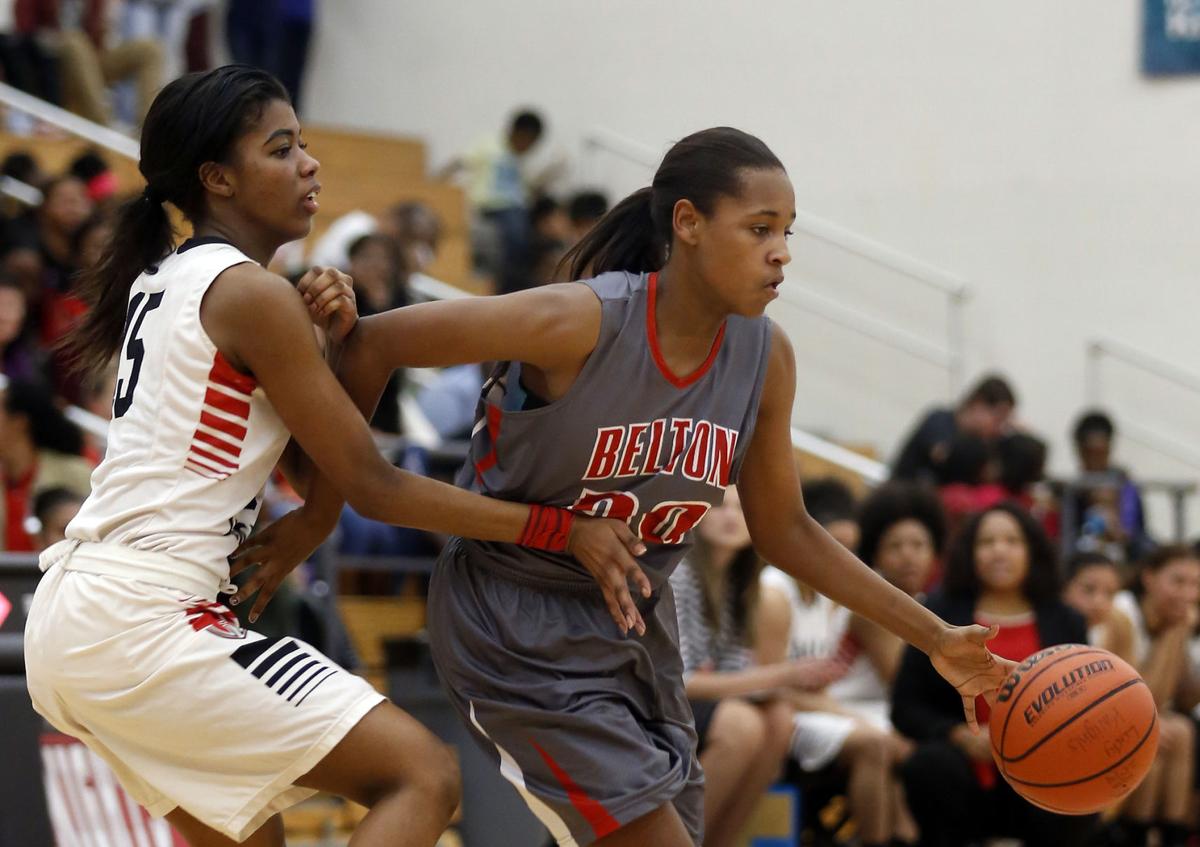 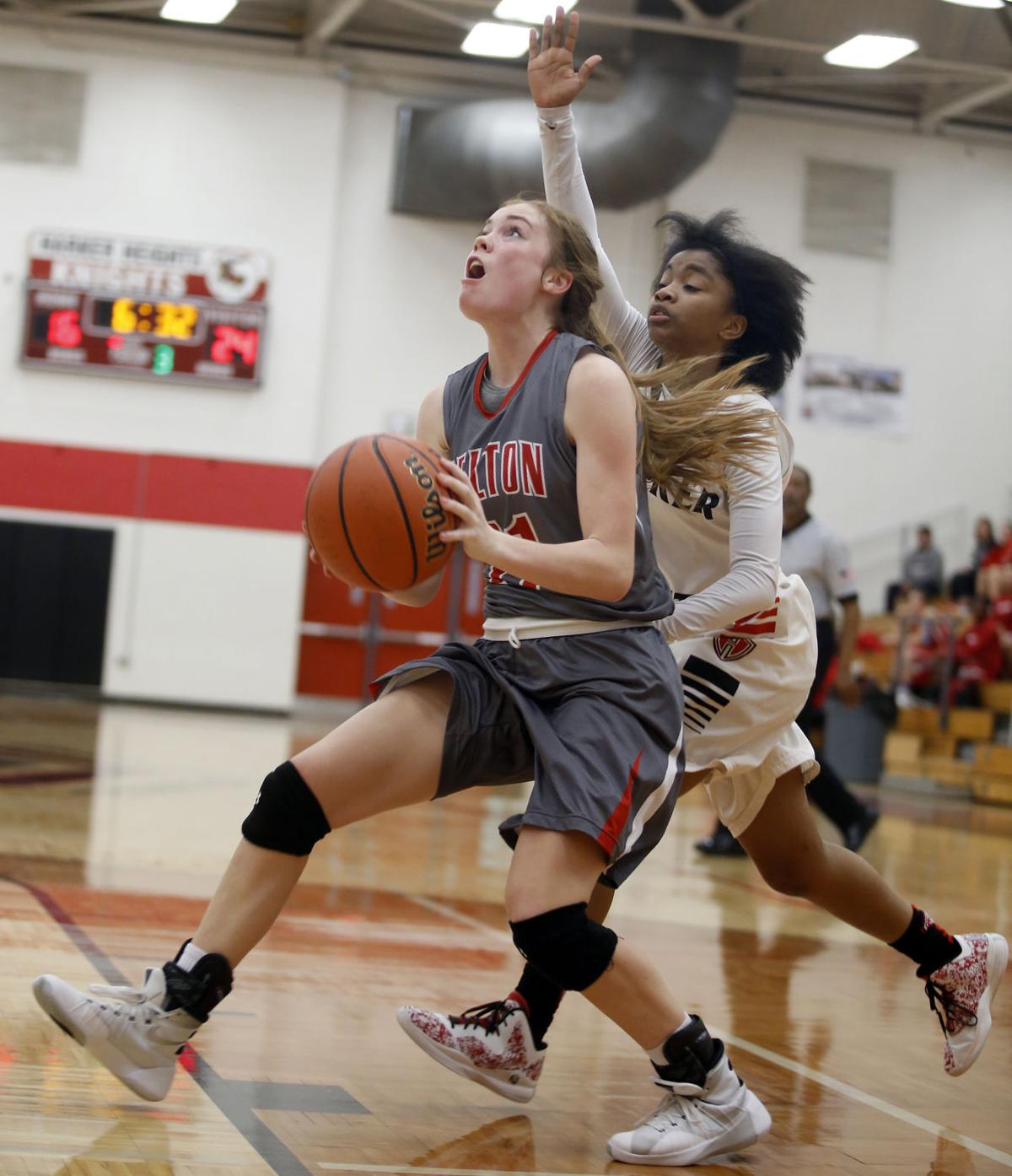 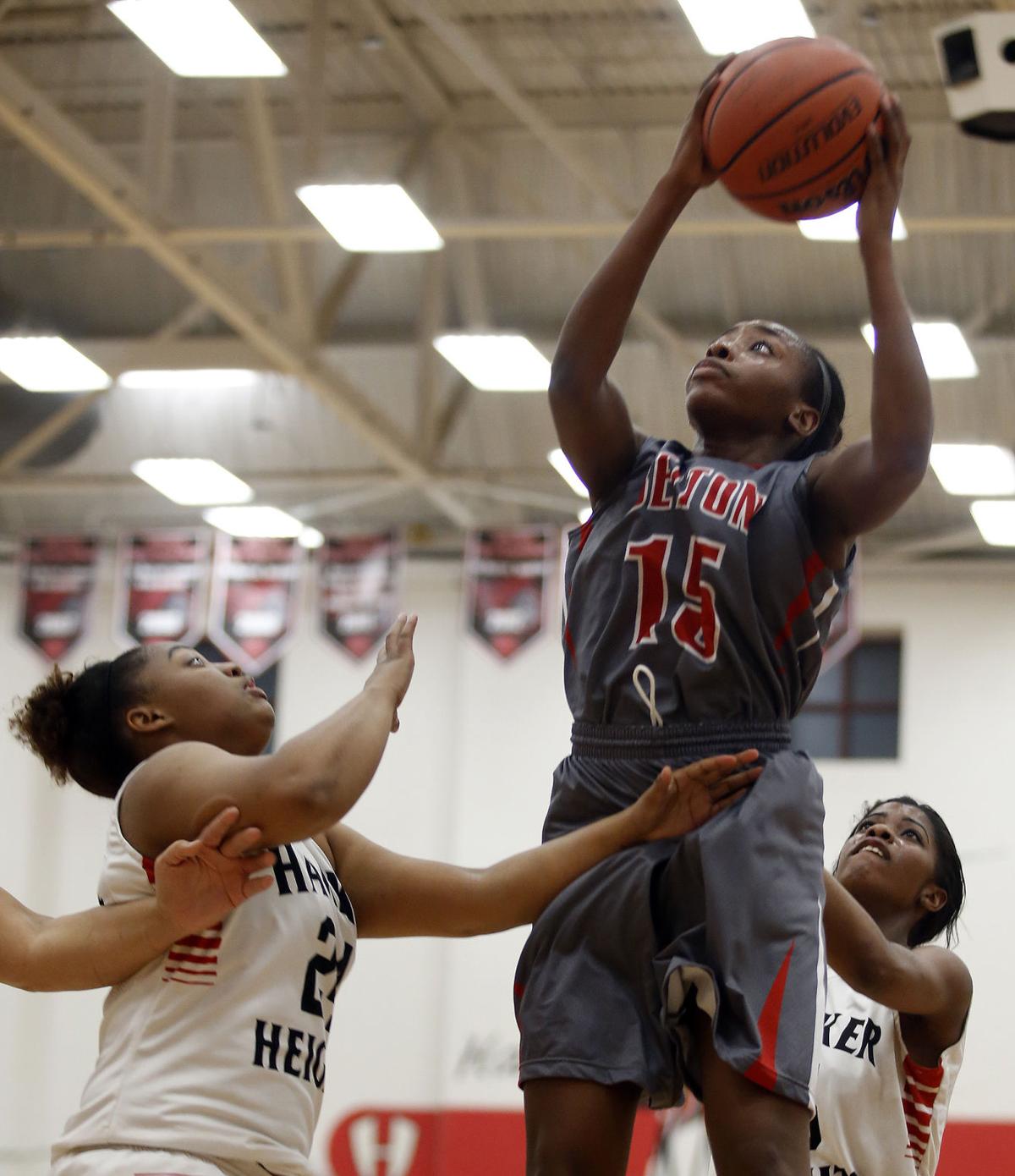 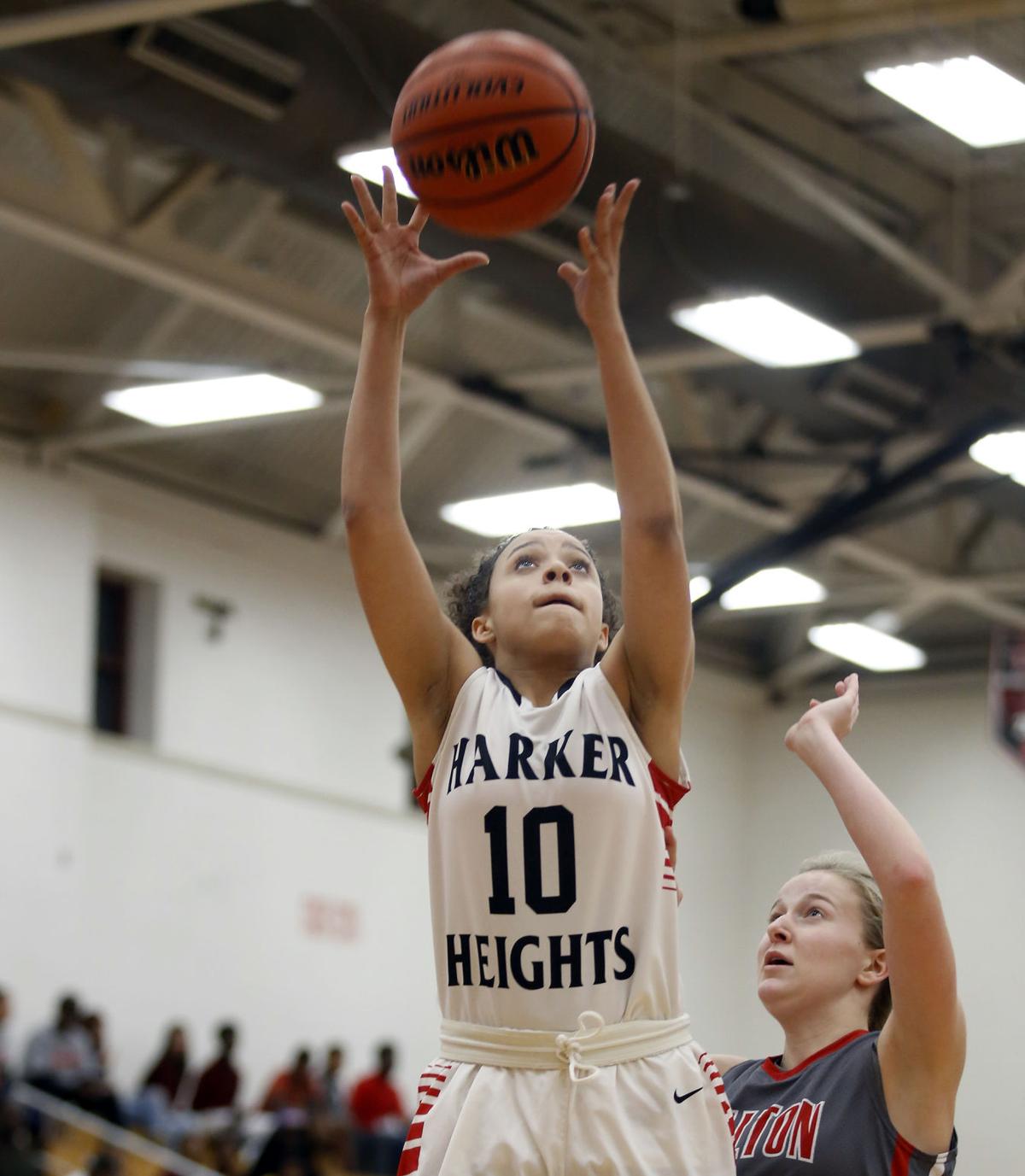 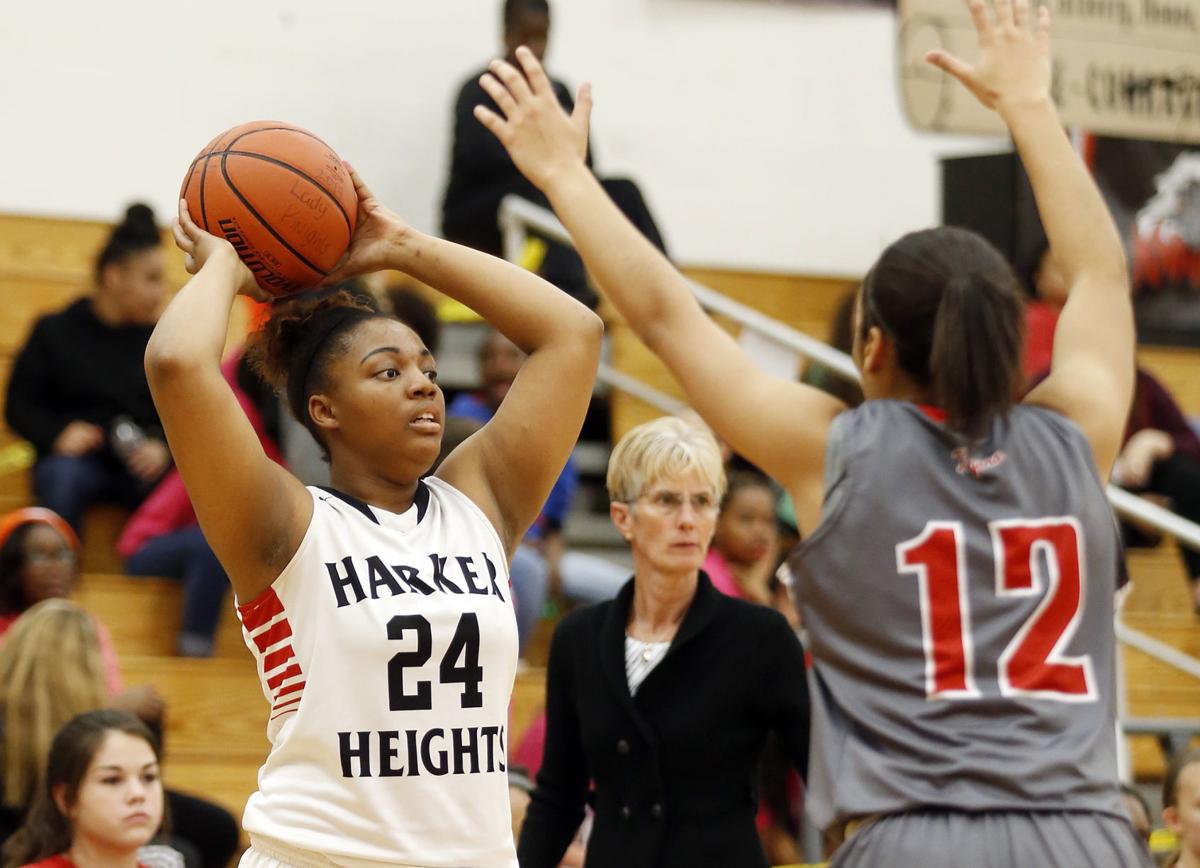 Harker Heights' Jalynn Bonner (24) looks for an open teammate while being guarded by Belton's Blair Gilbert on Friday at Harker Heights.

Harker Heights' Jalynn Bonner (24) looks for an open teammate while being guarded by Belton's Blair Gilbert on Friday at Harker Heights.

But fortunately for Belton, a win is a win in the standings.

Belton defeated Harker Heights 36-32 at Harker Heights High School to end the first half of district play tied with Copperas Cove and Shoemaker for third place in 12-6A.

“You definitely don’t want to go backwards, but I feel like we’re still OK,” Gomez said. “The win is more important than looking real good, but we can always fix that.”

Belton (19-7, 3-3 12-6A) led from start to finish in the contest, but afterward, Gomez felt there was plenty of room for improvement on both ends of the floor.

“We did not look like we were focused at all,” she said. “I thought we played hard, but we weren’t focused.”

But the Lady Tigers were able to pull out the win and enter the second half of league play in position to earn a playoff spot as they own the head to head tiebreaker against Copperas Cove.

Gomez, however, said her team is taking it one game at a time as they try to navigate a tough District 12-6A.

“We’re in charge of our own destiny,” Gomez said, “and if we truly believe in our goal then we’re going to make some adjustments and do some good things.”

NO. 25 WACO MIDWAY 54, ELLISON 45: At Midway, the Ellison Lady Eagles suffered a District 12-6A road loss against the 25th-ranked Pantherettes.

“I thought the girls played a lot harder and wanted to win this ballgame, and they’re working very hard to fix the situation that we’re in,” said Ellison head coach Sherry McKinnon.

GATESVILLE 40, ROBINSON 36: At Robinson, the Hornets rallied from a 17-5 hole in the first quarter to earn their first District 17-4A road win.

Allaria Jones scored a game-high 16 points to go with 10 rebounds for Gatesville, while teammates Rebekah Nolte and Katie Veazey finished with 11 and 10 points, respectively.

NO. 25 LOMETA 67, CHEROKEE 31: At Lometa, Adrian Rivera scored 12 of Lometa’s 19 third-quarter points, while teammate Kyle Molter scored eight of his 12 points in the fourth quarter as the Hornets cruised to a lopsided victory against Cherokee.

NO. 13 LIBERTY HILL 89, SALADO 58: At Liberty Hill, Aedan Welch scored 21 of his game-high 28 points in the first half and the 13th-ranked Panthers beat Salado in their District 25-4A opener.

LAMPASAS WINLESS AT SALADO TOURNAMENT: At Salado, the Lady Badgers, who are battling injuries and sickness, were shut out in all three of their matches at Salado’s tournament. Lampasas opened with a 7-0 loss to Abilene Wylie before being defeated 1-0 by both Liberty Hill and Kingsville.

“This was a tournament where we started jelling together as a team despite the hard losses,” he said. “We stepped up our play as a group and learned some valuable lessons that will hopefully pay dividends when we get into district play.”

Lampasas returns to the pitch Tuesday, traveling to face Killeen.

GATESVILLE SPLITS MATCHES: At Salado, the Hornets opened play at the Salado tournament with an 8-0 loss to Wimberley before rebounding to beat Kingsville 2-1.

Gatesville started slowly, giving up six first-half goals to Wimberley before halftime adjustments helped the Hornets’ slow down their opponents.

Against Kingsville, Gatesville limited the opposition’s offense en route to emerging with the win and improving to 2-5 overall.

Gabriel Colon-Torres scored for the second straight game, and Aurelio Sanchez also found the back of the net for the Knights. Chauncy Jackson had two assists.

ELLISON DROPS 2 AT GOVERNOR’S CUP: At Georgetown, Ellison’s Alex Lee and Ahmad Holt scored in the Eagles’ 3-2 loss to Sherman at the Governor’s Cup. The Eagles also lost 2-0 to San Angelo Central.

Ellison (3-3-1) continues in the tourney tonight at 7 at East View High School to face Lake Travis.

HARKER HEIGHTS — Neither coach was happy with the way her team performed when the final buzzer sounded Tuesday at Harker Heights gymnasium.