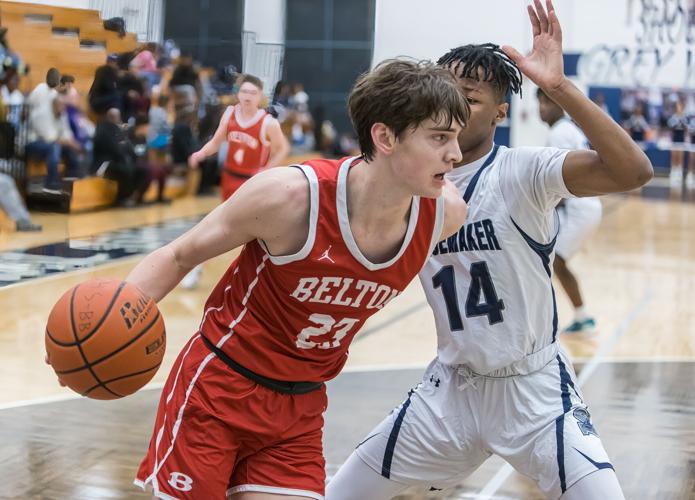 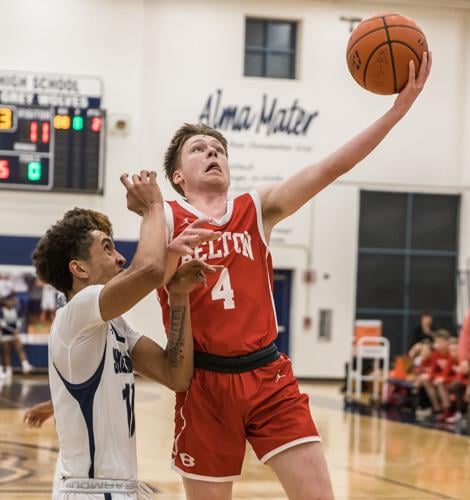 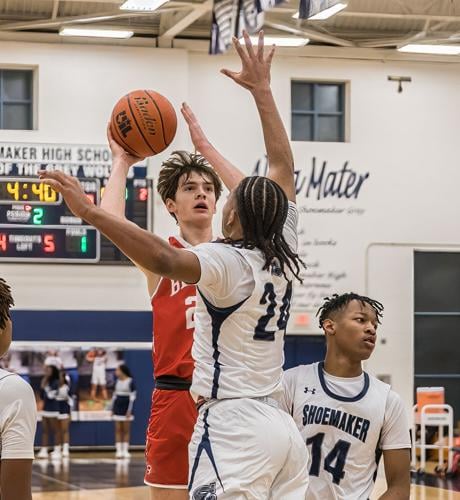 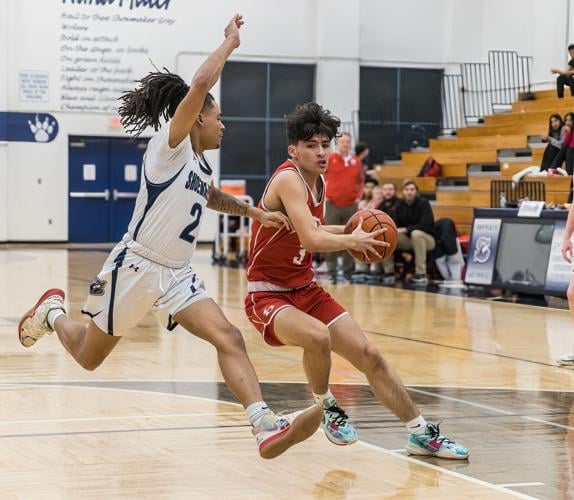 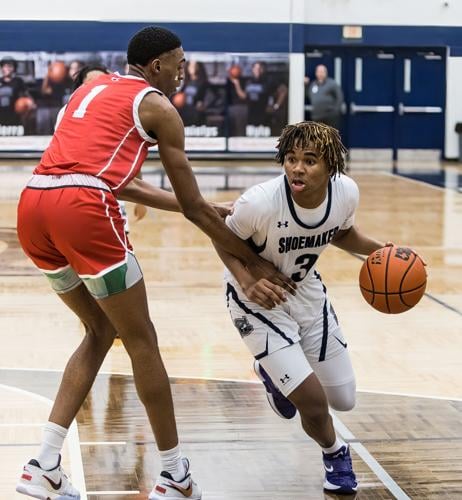 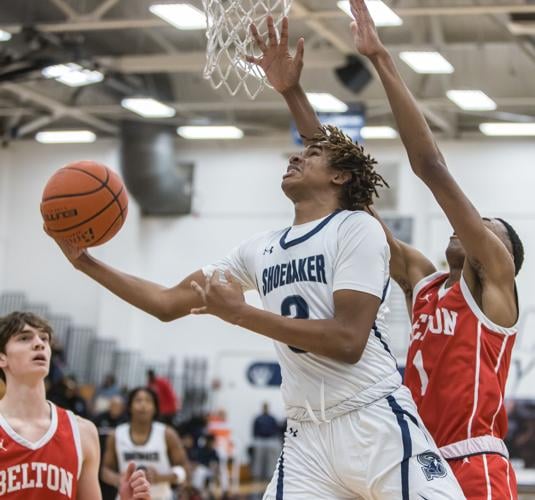 Shoemaker's Nasaun Parker (3) shoots under the basket after working around Belton's Jayden Ford (1) at Shoemaker High School on Friday, Jan. 20, 2023. 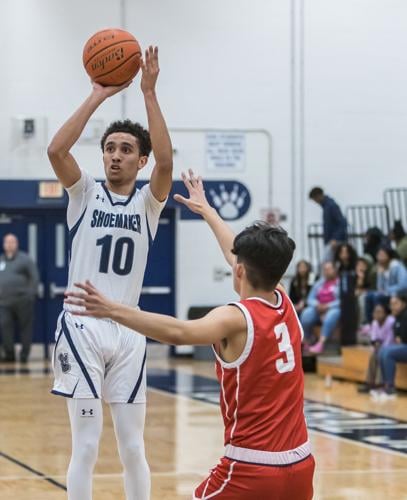 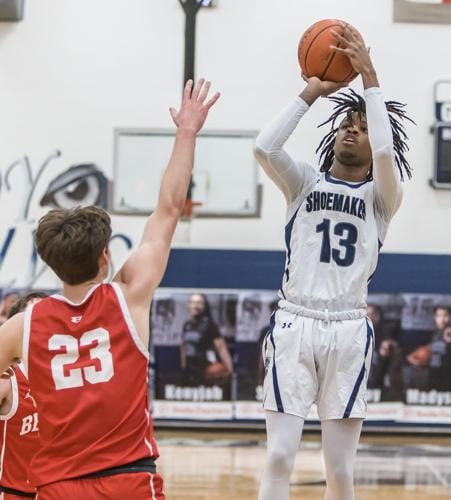 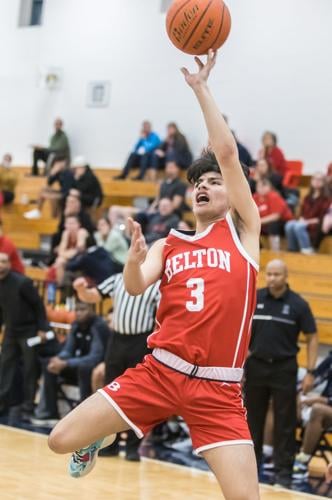 Shoemaker's Nasaun Parker (3) shoots under the basket after working around Belton's Jayden Ford (1) at Shoemaker High School on Friday, Jan. 20, 2023.

Facing Shoemaker on the road Friday, Belton had an opportunity to conclude the first round of the District 22-5A schedule in a tie for second place with a victory, but for a majority of the contest, the outcome was uncertain.

After clinging to an early lead through three quarters, the Tigers’ advantage evaporated as the Grey Wolves tied the score with approximately five minutes remaining in regulation.

Shoemaker could not capture the momentum, though.

Belton closed the contest with a 10-3 outburst to earn a 43-36 victory, but after returning just three players from last year’s team and starting district with two consecutive losses, the Tigers’ head coach was pleased with more than just the outcome.

“The most impressive thing was the guys’ composure,” Fossett said. “They didn’t lose their heads, and this was the first time a lot of these

guys were in a varsity game in an environment like that. This was a big district game, but they didn’t blink.

“There were no nerves. They weren’t scared. They just kept playing.”

Shoemaker sophomore forward Trayvonne Woodley’s basket in the paint tied the game at 33-33, but moments later Belton junior Gian Carlo connected on a 3-pointer to create all the separation the Tigers needed.

Trap Johnson, a forward, extended Belton’s advantage to five points, 38-33, before Grey Wolves guard Jaymes Brown-Peterson responded with a successful 3-pointer, but Shoemaker would not get any closer.

The Tigers recorded the game’s final five points at the free-throw line, including a pair from senior Chris Scott, who created a two-possession game at 40-36 with 55.1 seconds remaining in the fourth quarter.

“That was just a knock-down, drag-out dogfight between two teams that really wanted to win,” Fossett said. “It was very physical on both ends of the floor, and it was cleanly played by both teams, but we were able to hit some free throws down the stretch to seal it.

“The kids just did a great job.”

Shoemaker forward Nasaun Parker opened the scoring with a 3-pointer, but Belton was responsible for the next seven points, as Johnson, who had 14 rebounds, scored five of his game-high 19 points in the period, and the Tigers never trailed again.

Belton led 11-7 following the first quarter and 20-18 at halftime before creating a six-point cushion at 24-18. The Grey Wolves posted six unanswered to tie the score, and they would tie the game twice more but could not take the lead.

“The effort was great,” Shoemaker head coach Karron Taylor said. “Every guy that got in the game had a job to do, especially on defense, and I thought they did a good job of executing, which is why it was a low-scoring game. I was emphasizing defense and definitely trying to not give up those open 3-pointers Belton likes to shoot.

“In the second half, they only had one.”

Parker finished with 15 points and six rebounds to lead the Grey Wolves, who find themselves in a logjam in the district standings.

No. 2 Ellison remains atop the field with an undefeated showing through seven games, while Shoemaker (9-18), Belton (20-7) and Waco University are tied for second place with identical 5-2 records.

For Fossett, it is a good position to be in, but he also understands his players cannot become comfortable with the situation.

“We’ve rattled off five wins in a row,” Fossett said, “and that is the thing I’m proud about. When we were 0-2, our ship could have gone either way, but we found a way to ride it.

“We can only enjoy this for the weekend, though, because Ellison is coming to town Tuesday. That’s our prize for winning this one.”