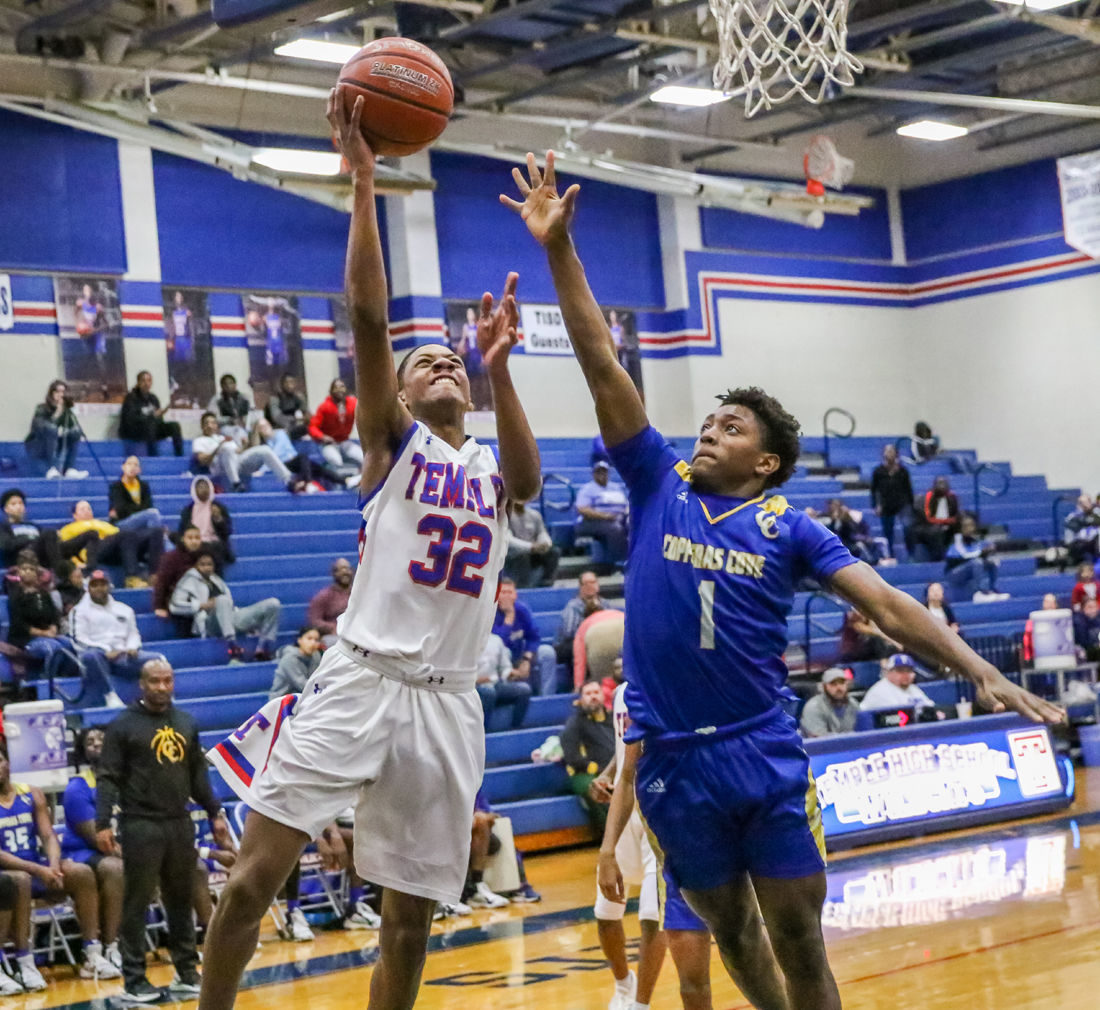 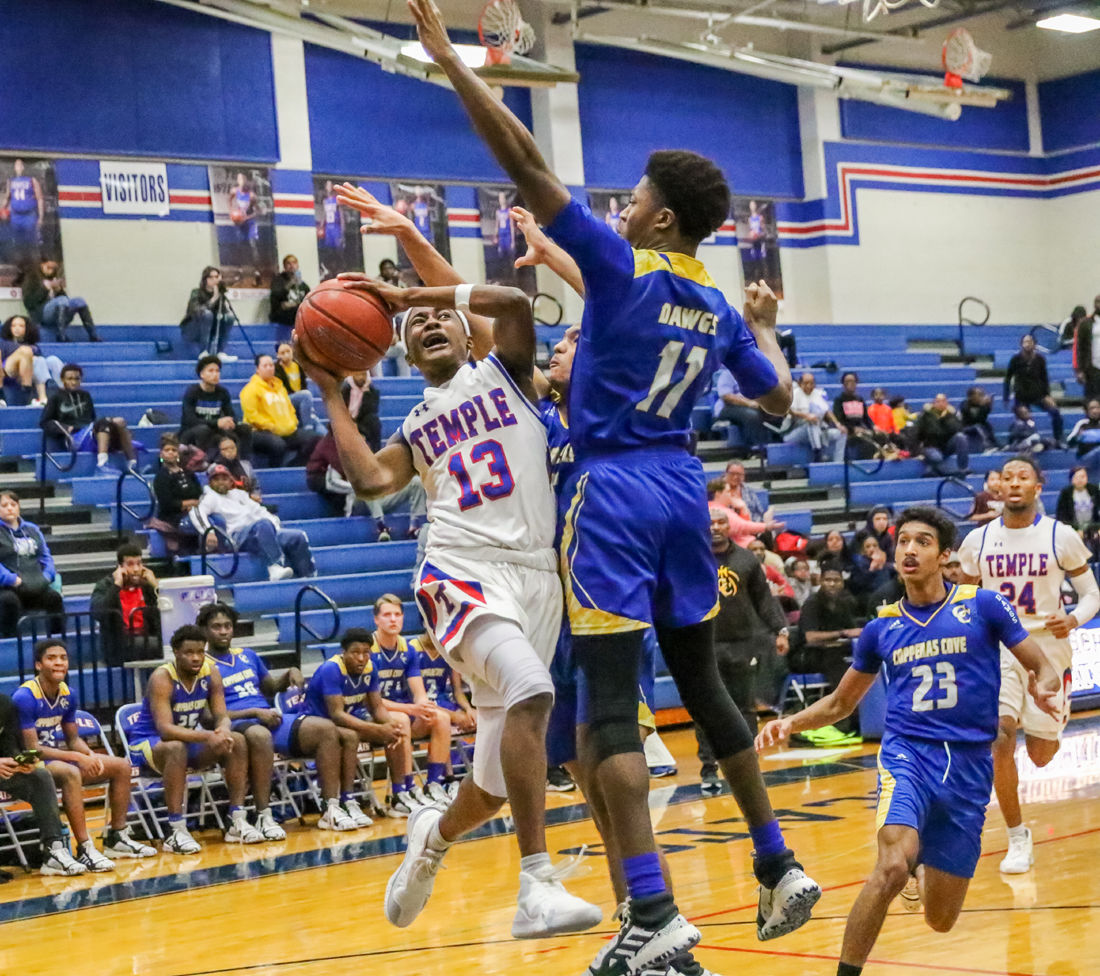 Temple's Aundra Jackson (13) twists for a shot against Copperas Cove defenders Jerome Gaillard (11) and Isaiah Baker on Tuesday in Temple. 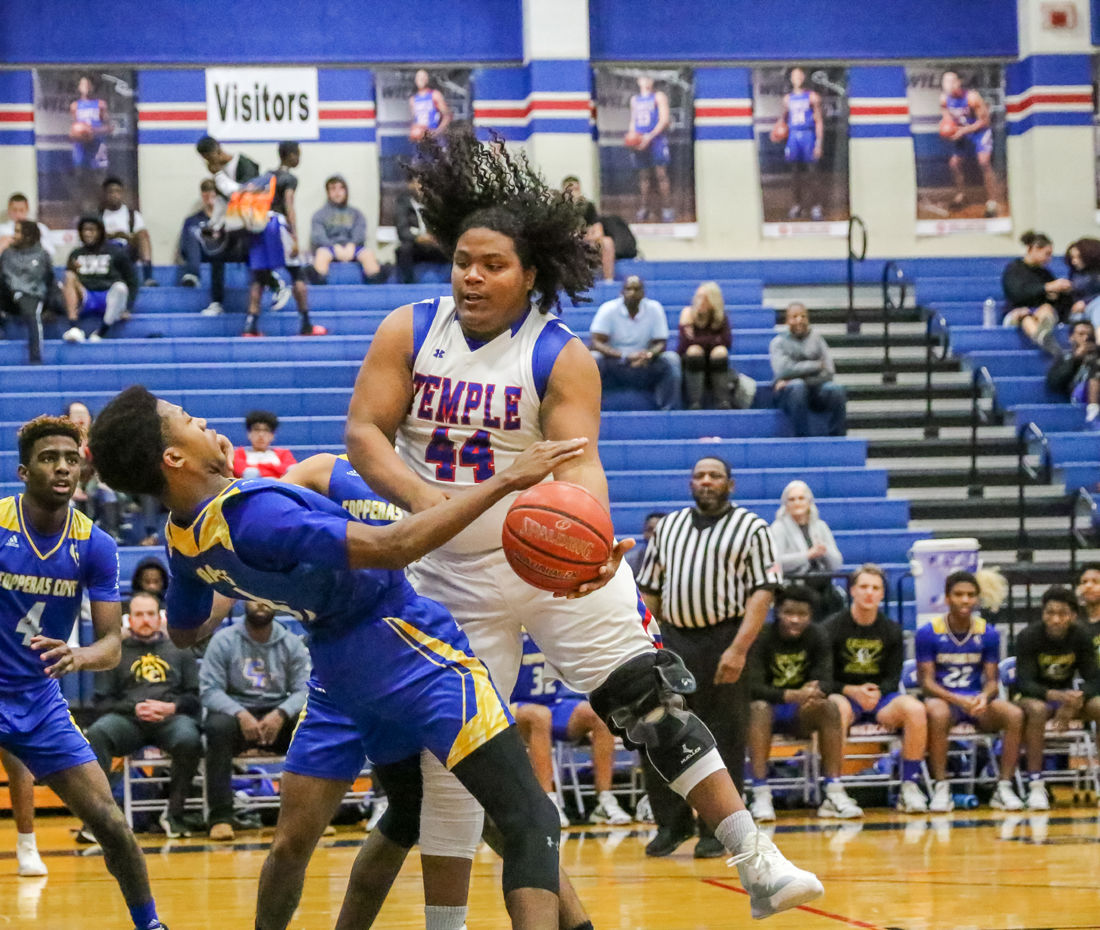 Temple's Markel Carter (44) passes the ball as he runs into Copperas Cove's Jerome Gaillard on Tuesday in Temple.

Temple's Aundra Jackson (13) twists for a shot against Copperas Cove defenders Jerome Gaillard (11) and Isaiah Baker on Tuesday in Temple.

Temple's Markel Carter (44) passes the ball as he runs into Copperas Cove's Jerome Gaillard on Tuesday in Temple.

TEMPLE — Leaned against a wall inside Wildcat Gym about 20 minutes after his team dispatched Copperas Cove 52-47 in workman-like fashion, Temple head coach Michael Thomas looked to one of his assistants who then looked up from his cell phone to deliver the news Thomas wanted to hear to cap an already memorable Tuesday.

By virtue of the Wildcats’ victory on senior night and Shoemaker’s overtime loss to Harker Heights, Temple clinched a playoff spot, the program’s first since the 2015-16 season.

“It’s just a testament to the kids and the coaching staff putting in the work and buying into your vision,” said Thomas, who’s in his second year in charge. “I’m proud of those kids for just believing. I’m happy. I’m excited. I’m happy for my coaching staff, they’re doing whatever they have to do to make the team better. That’s what it’s about, everybody pulling their own weight.”

That about sums up how the Wildcats (22-7, 9-5 District 12-6A) earned the triumph Tuesday, when nine players had at least two points and a 14-0 run during the second quarter turned the tide.

Quentin Johnston posted a team-high 11 points for third-place Temple, which has road games against fourth-place Harker Heights on Friday and Killeen Shoemaker next week to close out the regular season. Jaiden Pate went 5-of-7 from the free throw line in a tightly contested fourth quarter and finished with 10 points, while Elcid Smith and Joseph Stewart posted nine apiece for the Wildcats.

Temple trailed 21-15 at the 6:22 mark of the second quarter when the game-changing surge commenced, spurred by an uptick on defense.

Stewart scored the first three points, Johnston added two and Rico Troup’s three-point play suddenly added to the Wildcats’ first advantage, 23-21 just 2 minutes later. By the end of it, Temple led 29-21 and the Bulldawgs had gone scoreless for 5 minutes.

Markel Carter’s buzzer-beating putback lifted the Wildcats to a 33-25 halftime cushion, and Johnston’s bucket on Temple’s first possession after the break provided the game’s only double-digit lead. Cove responded with eight in a row, including two 3-pointers from Carter, and trailed just 42-37 entering the fourth.

“I was proud of my guys because in the past a run like that would have kind of doomed us for sure. But they did weather the storm a little bit,” Cove coach Travis Boyce said. “But, at the end of the day, Temple’s good. We played a heck of a team.”

The Bulldawgs pulled within one, 44-43, with 1:29 to go in a low-scoring fourth but never overtook Temple, which now has a playoff berth to celebrate.

“We’re blessed man. I told the guys to enjoy it tonight but we have to get back to work because we’re trying to get the third seed,” Thomas said.

One bi-district matchup for 12-6A girls basketball is already set heading into Tuesday's season finale.