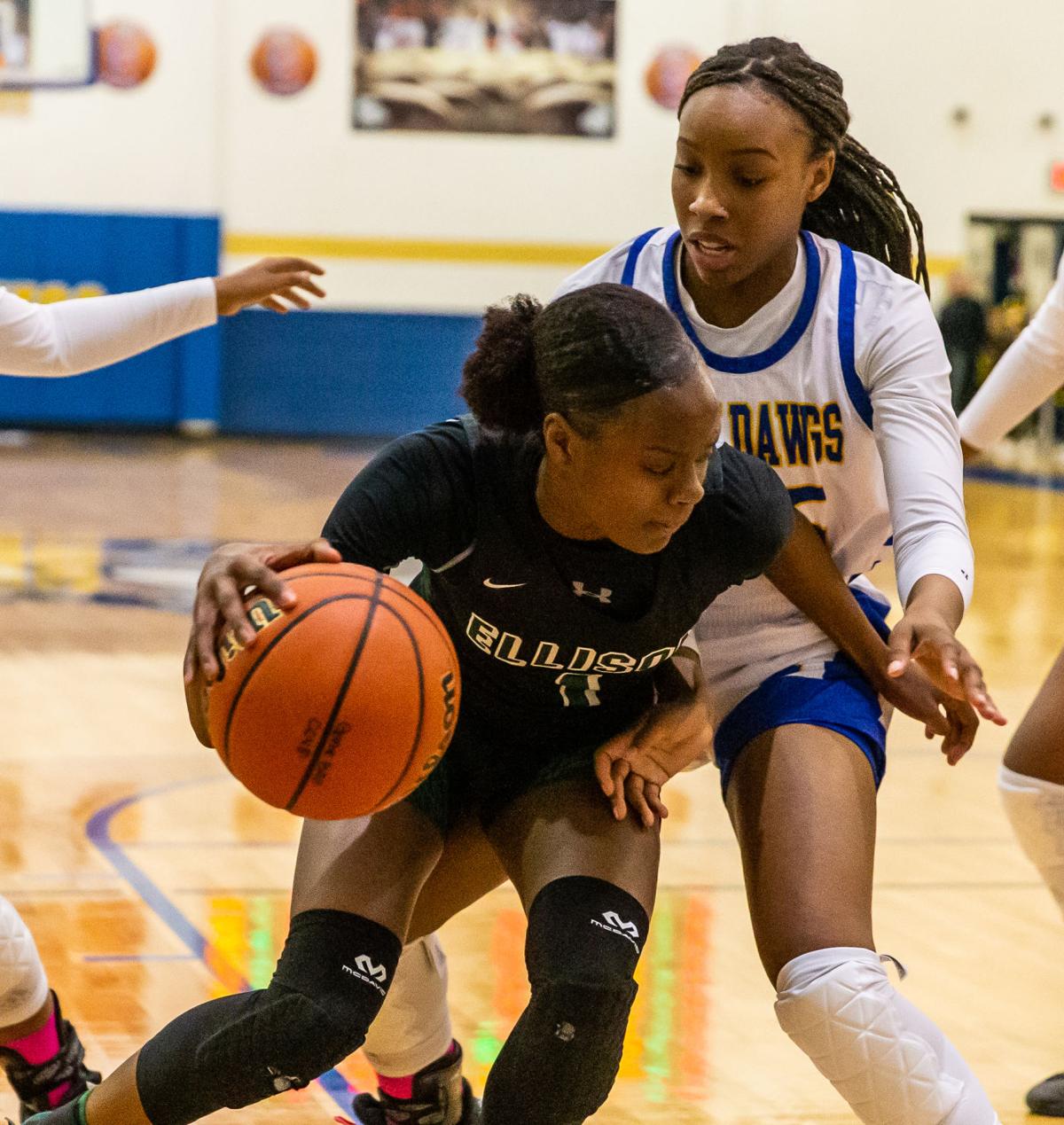 Ellison's Alina Simon (1) gets a rebound in front of Copperas Cove's Leah Powell on Tuesday at Copperas Cove. 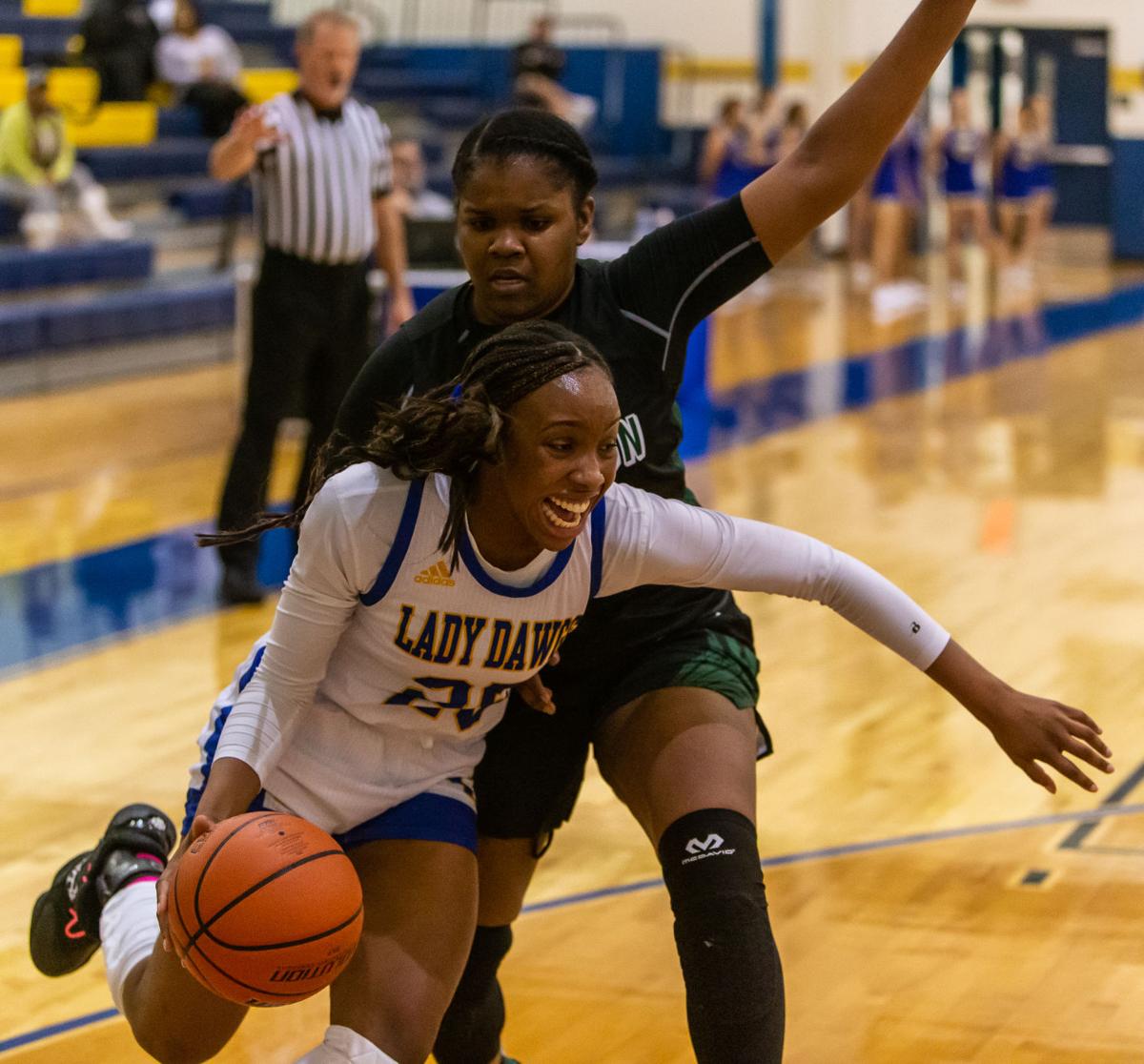 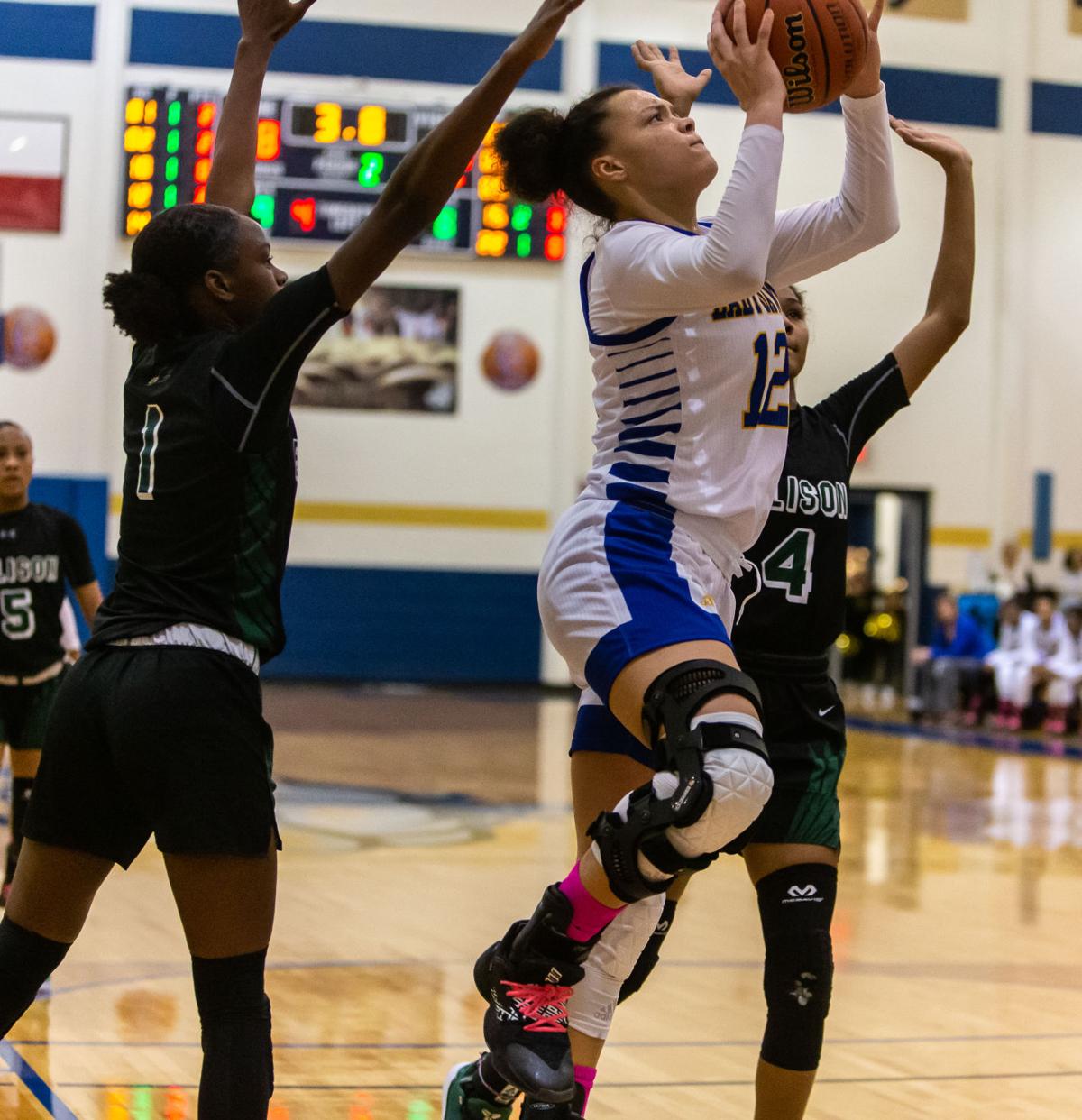 Copperas Cove's A'Zariah Knotts (12) shoots while flanked by Ellison defenders as time in the first half expires at Copperas Cove High School on Tuesday. 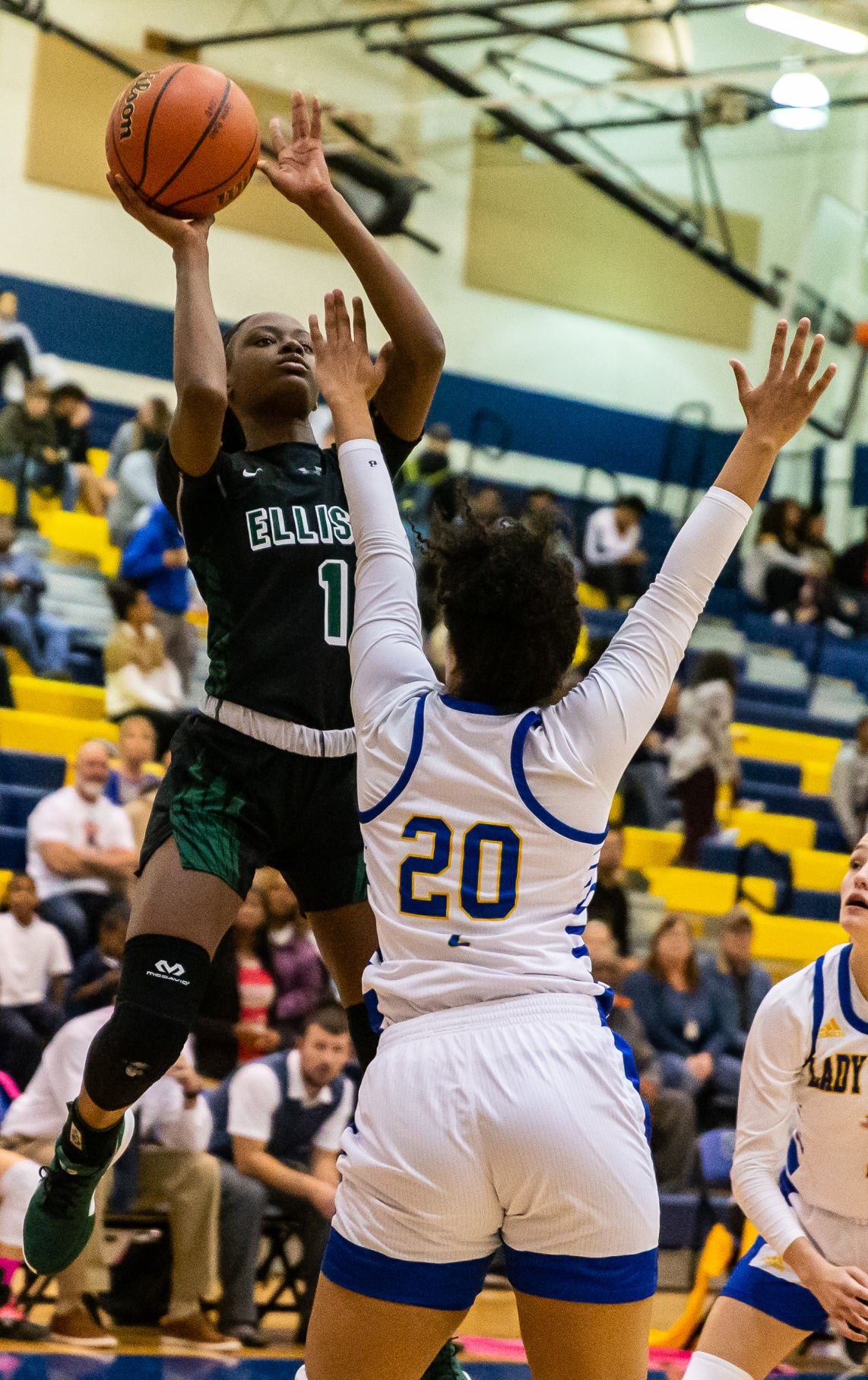 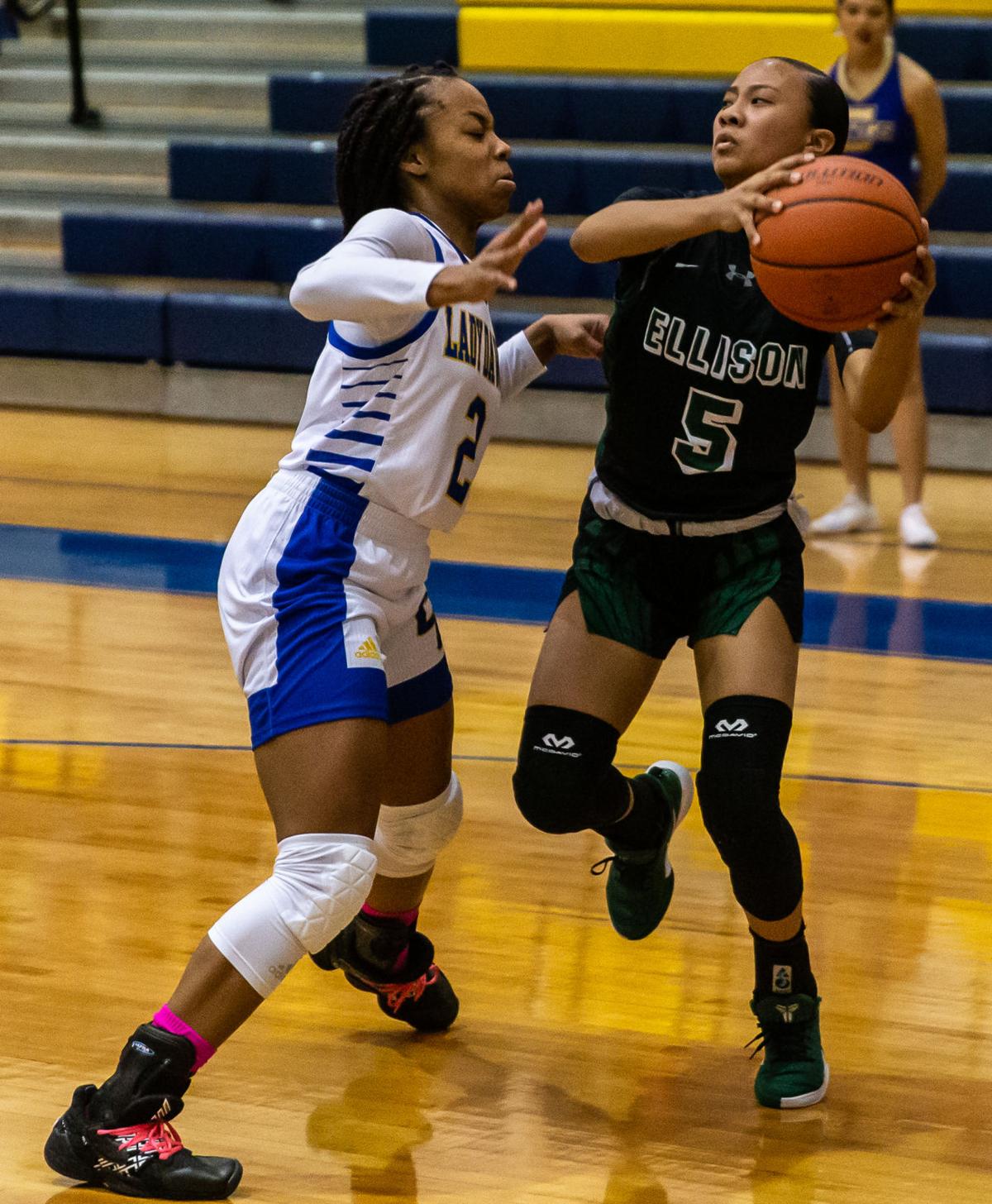 Ellison's Evelyn Lorenzo (5) tries to get around Copperas Cove's LiVonna Wallace on Tuesday at Copperas Cove. 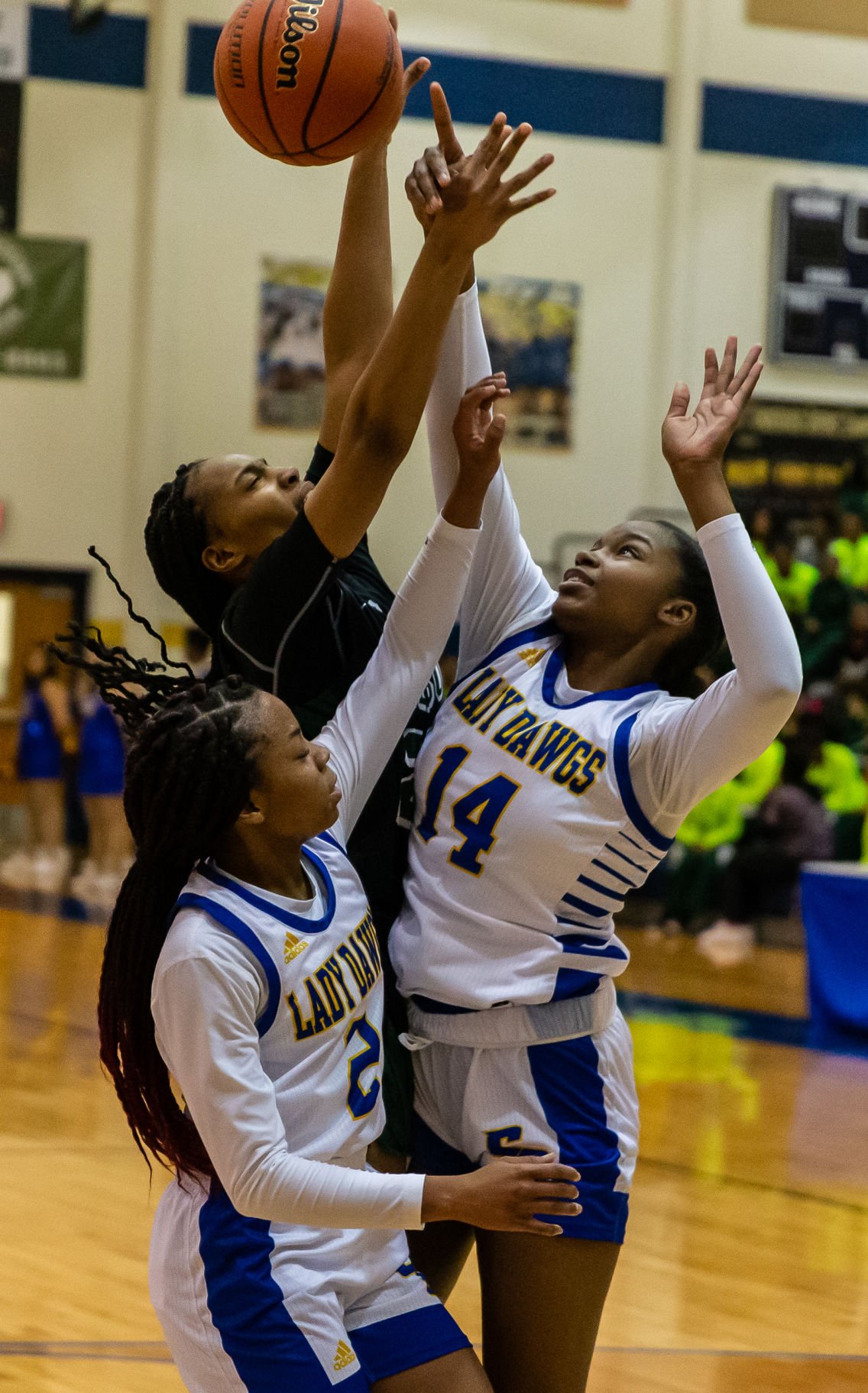 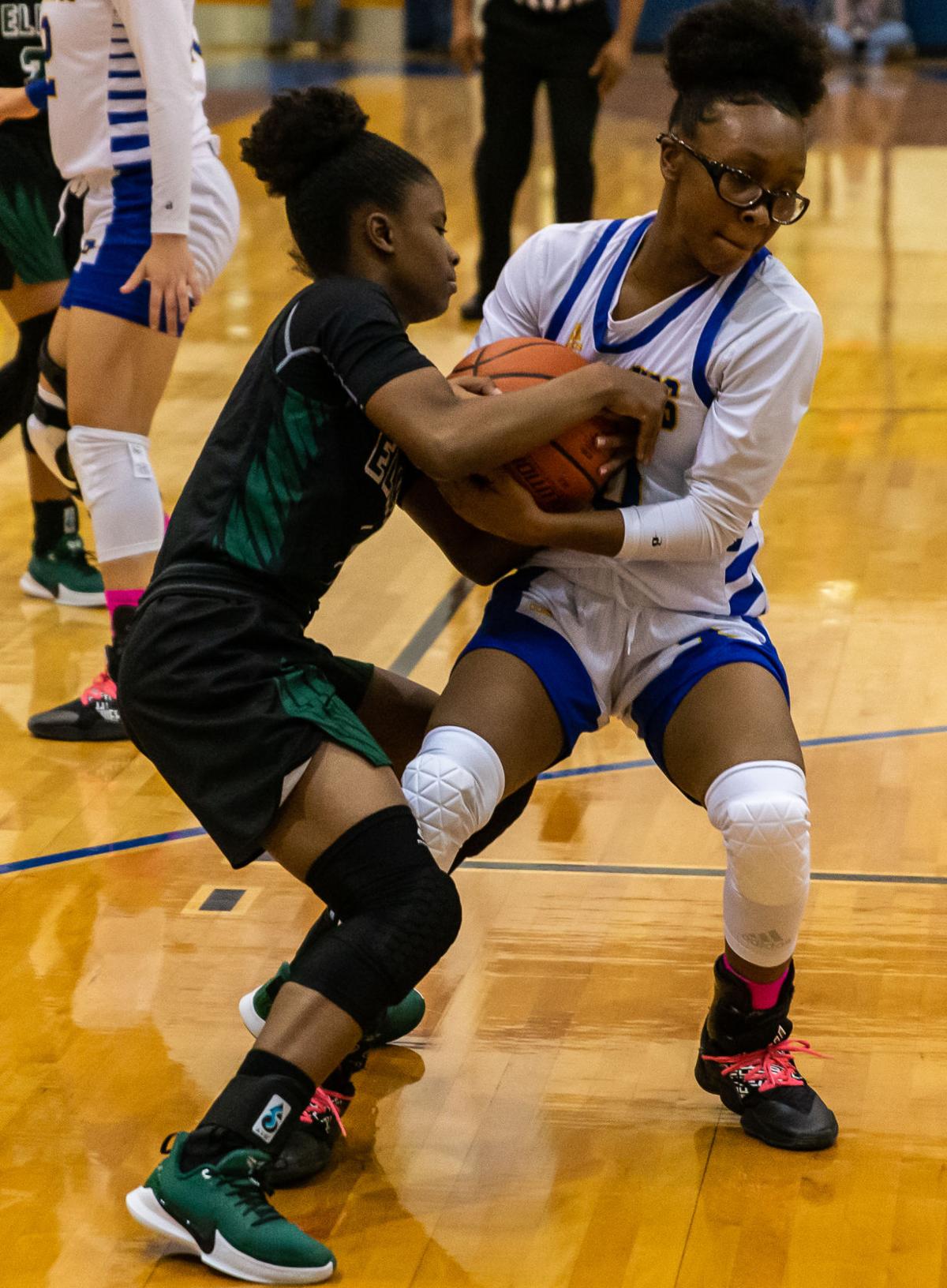 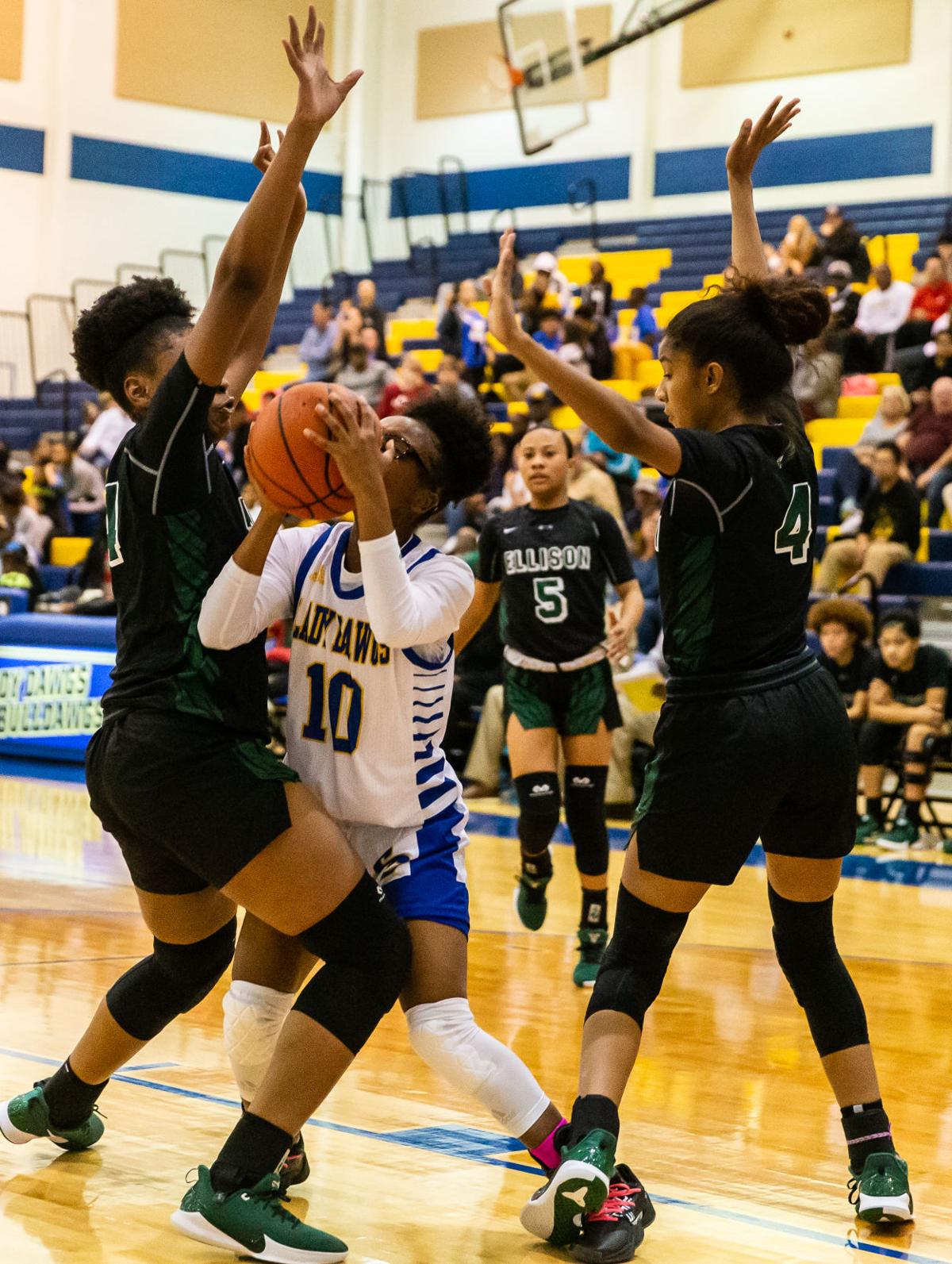 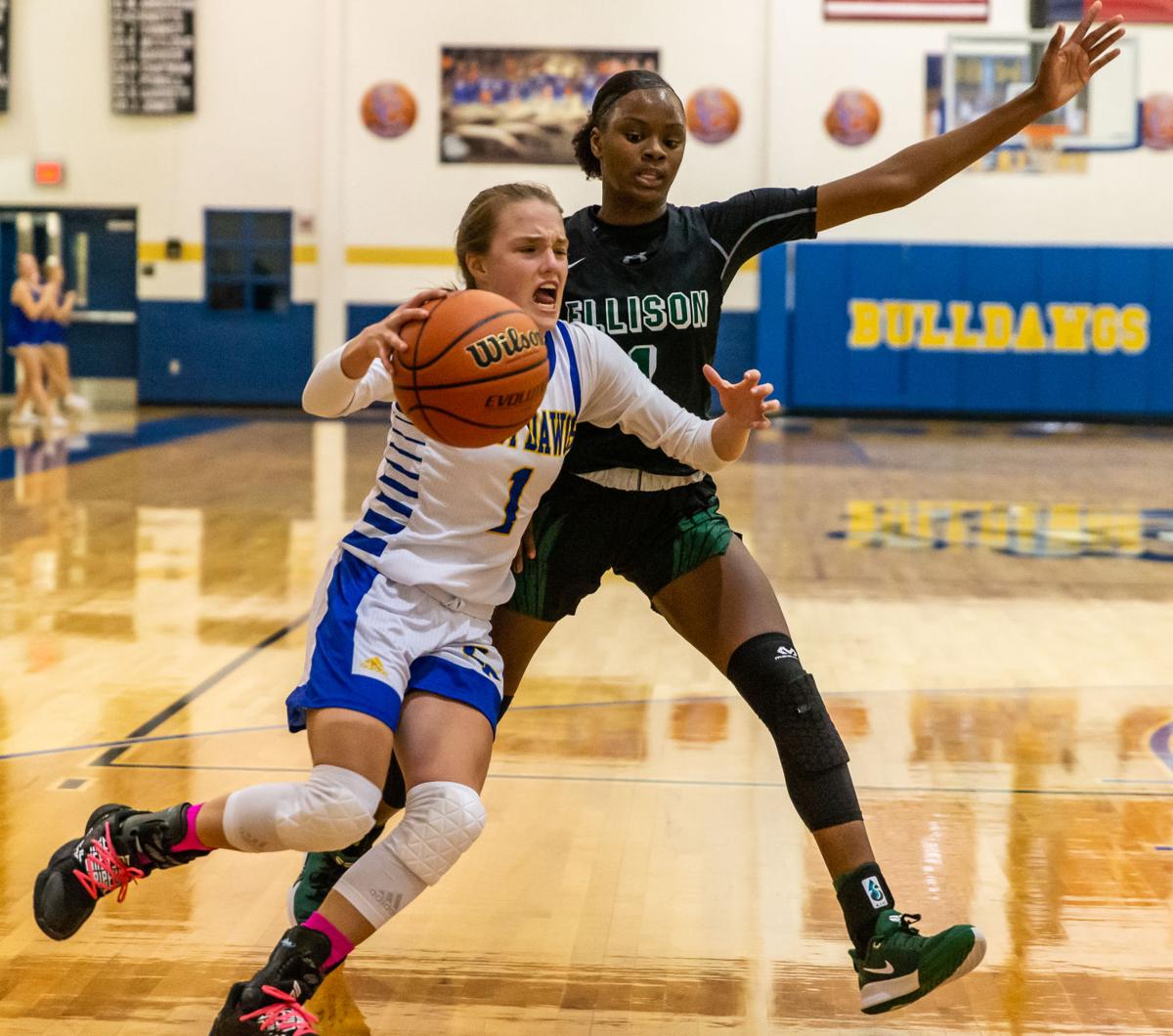 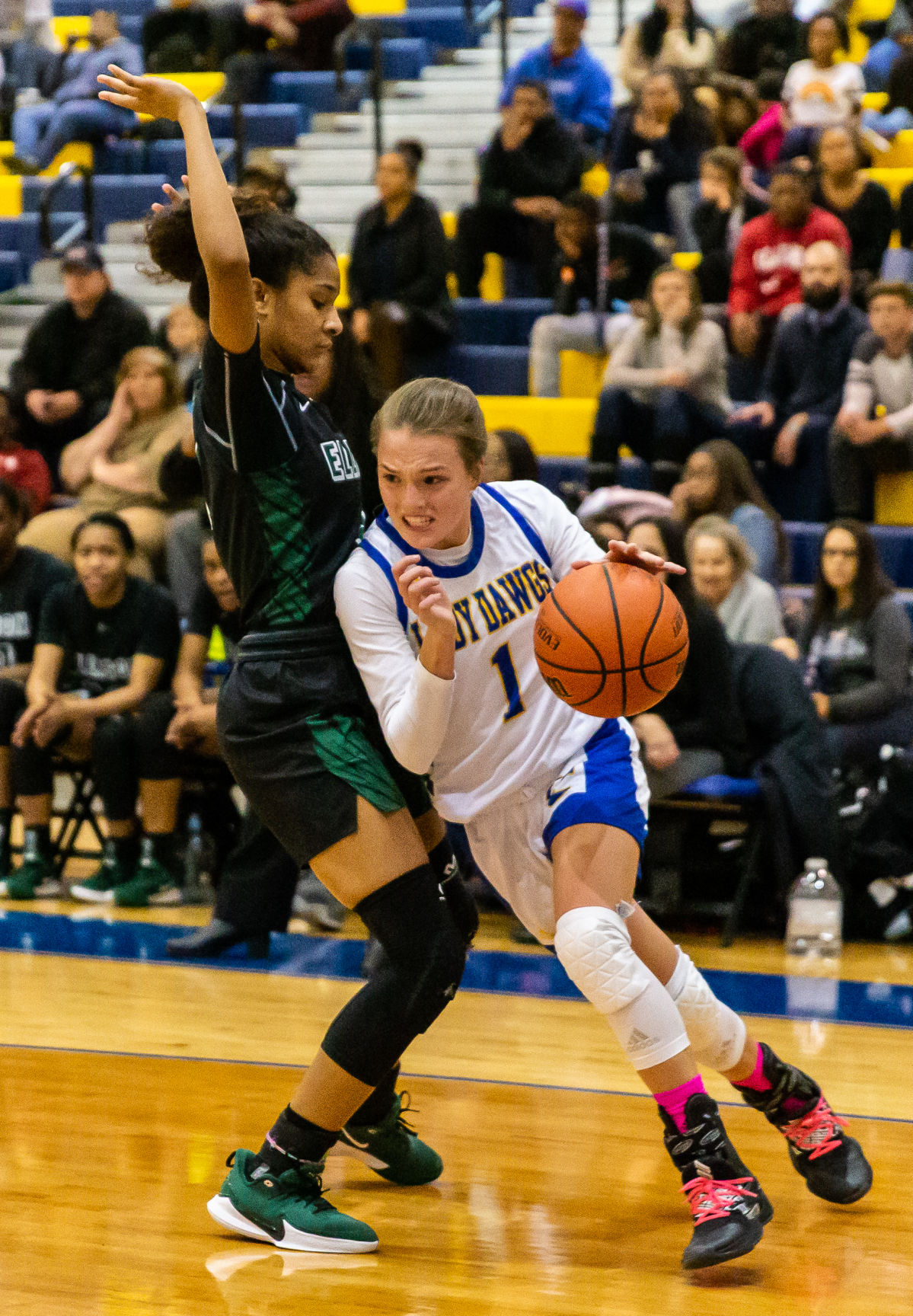 Copperas Cove's Madisen Honea (1) turns the corner on the baseline against Ellison's Arrianna Faulks on Tuesday at Copperas Cove. 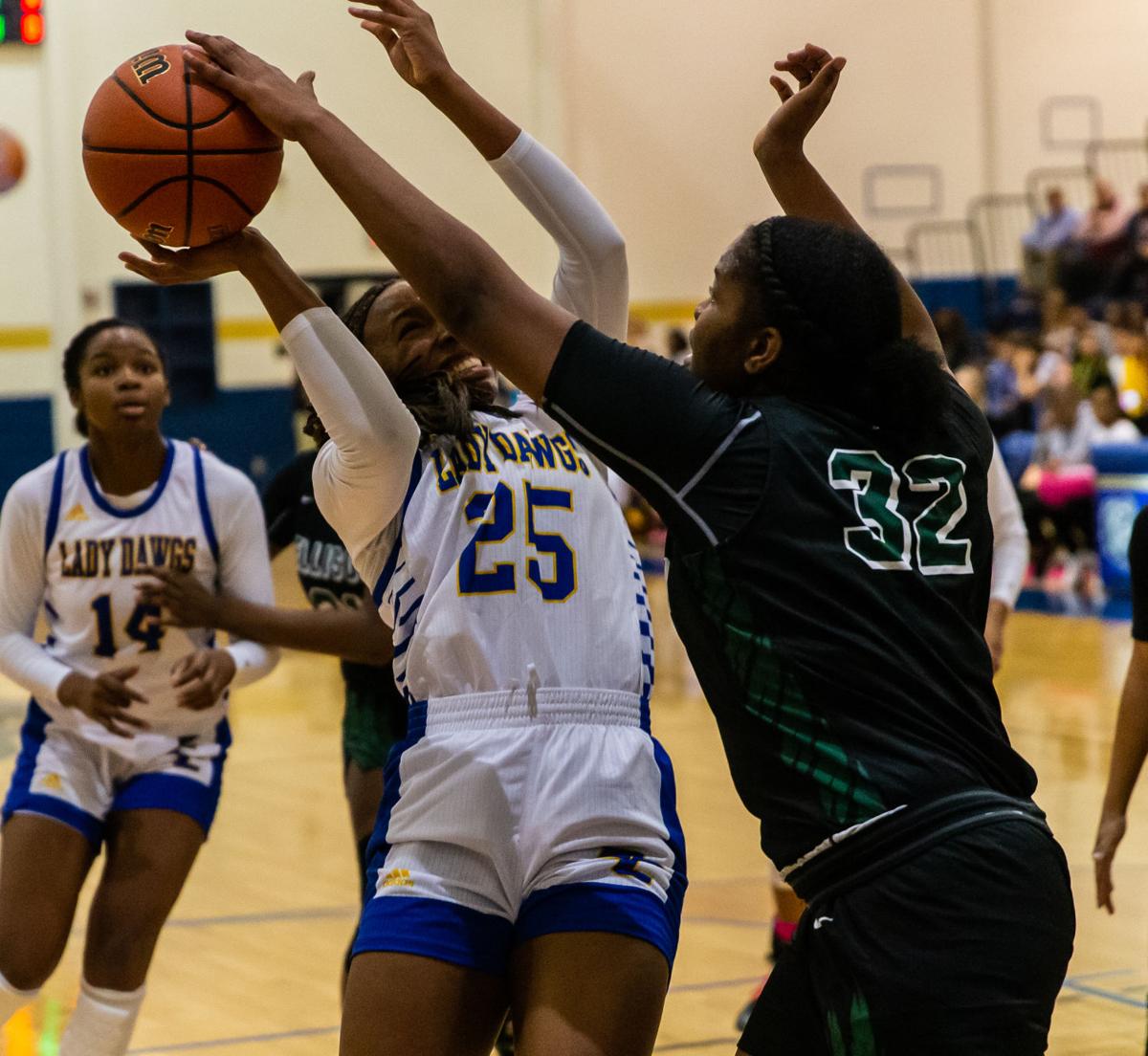 Ellison's Alina Simon (1) gets a rebound in front of Copperas Cove's Leah Powell on Tuesday at Copperas Cove.

Copperas Cove's A'Zariah Knotts (12) shoots while flanked by Ellison defenders as time in the first half expires at Copperas Cove High School on Tuesday.

Ellison's Evelyn Lorenzo (5) tries to get around Copperas Cove's LiVonna Wallace on Tuesday at Copperas Cove.

Copperas Cove's Madisen Honea (1) turns the corner on the baseline against Ellison's Arrianna Faulks on Tuesday at Copperas Cove.

COPPERAS COVE — Sherry McKinnon had a game plan, and her players executed it.

Returning to District 12-6A competition, Ellison traveled to face Copperas Cove — winners of 14 of its first 15 games thanks in part to an offense averaging 52.1 points.

But the Lady Bulldawgs were unable to maintain the trend.

Ellison held Copperas Cove to just a pair of field goals in the first half, and the Lady Eagles never lost control, winning 45-27 to remain unbeaten in district.

After the victory, Ellison’s head coach admitted it was imperative to immediately deliver defensively.

“We had to shut them down early,” McKinnon said. “We knew what we wanted to do, and we really worked hard on what we thought we could do to contain them after watching some film.

“The girls bought in, and they executed.”

The Lady Eagles scored five unanswered points to open the game before the Lady Bulldawgs responded with a 4-0 run punctuated by Madisen Honea’s basket.

Copperas Cove (14-2, 1-1) would see just one more field goal fall before halftime, though.

The Lady Bulldawgs missed 13 of 15 attempts in the half and went 4-of-11 from the free-throw line while committing 11 turnovers, and Ellison capitalized, using a 12-2 run bridging the quarters to take command.

“Defensively,” McKinnon said, “we did an outstanding job, keeping Copperas Cove to eight points in a half.

“The girls fought to the end, and I’m just very proud of the effort they displayed defensively.”

And they needed it.

Ellison (11-5, 2-0) slightly inflated its 19-8 halftime cushion to a dozen points, 24-12, on senior Alina Simon’s successful drive early before the Lady Bulldawgs chopped the deficit in half with an 8-2 outburst.

The Lady Eagles scored the game’s next nine points, however, and Copperas Cove never pulled within single digits again, capping off the contest with a 2-of-11 showing from floor in the fourth quarter to go along with 25 turnovers for the game.

“We were careless with the ball tonight.”

Honea posted a game-high 12 points, including eight in the third quarter, but it was not enough to contend with Ellison’s offense.

Despite making just 31 percent (14 of 45) of their shots, the Lady Eagles finished with a pair of double-digit scorers in Arrianna Faulks and Simon, who each produced 10 points, while teammates Di’Ambria Whyte (7 rebounds) and Evelyn Lorenzo tallied nine and eight points, respectively.

Ellison will attempt to build on the performance Friday at home against No. 10 Waco Midway following the Pantherettes’ 62-32 win against Waco to create a three-way tie with the Lady Eagles and Harker Heights atop the standings.

While it will be a challenge, McKinnon is confident her team is ready.

“This year’s group just has a big heart,” she said. “They want it, but they know it can’t just be words; it has to be through deeds, and they are willing to work for it.

“They’re coachable, and I can get on to them if necessary and know they will respond in a positive manner instead of making it a negative.”

On a warm, muggy December night, the atmosphere inside the Ellison High School gym was tense. The Lady Eagles’ basketball game against No. 10 …