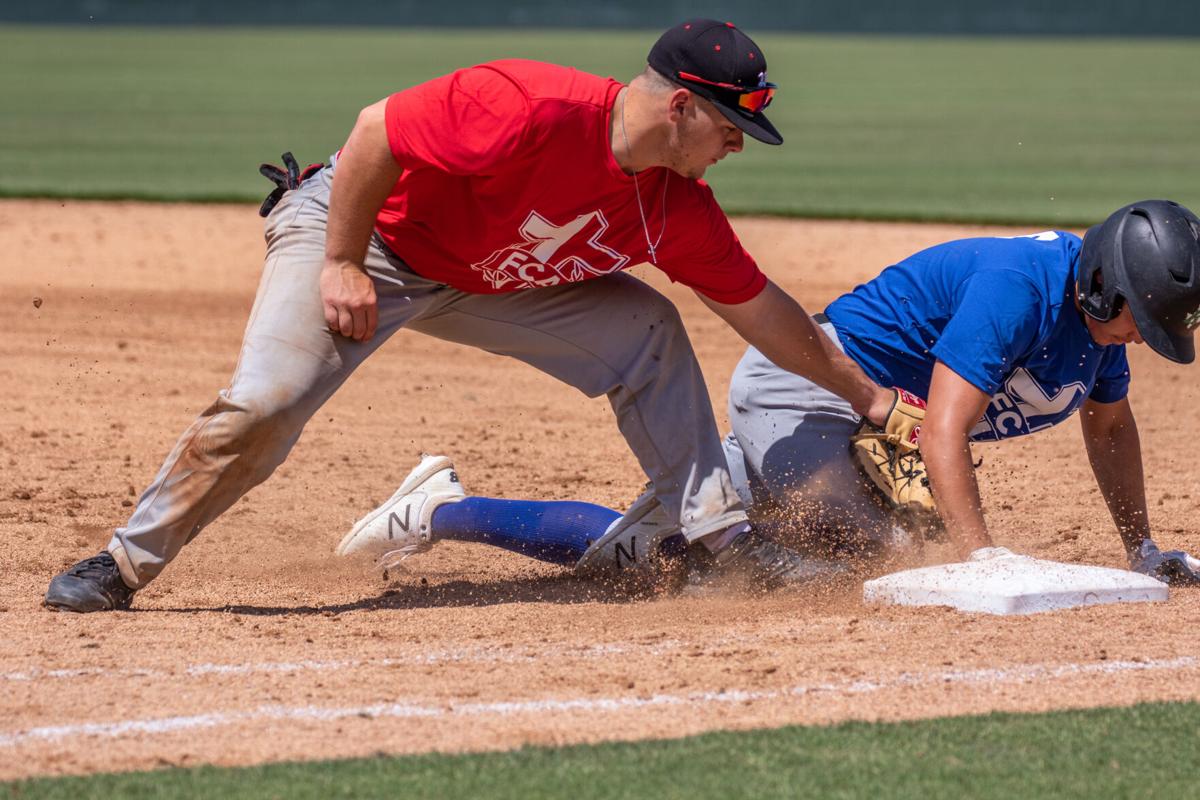 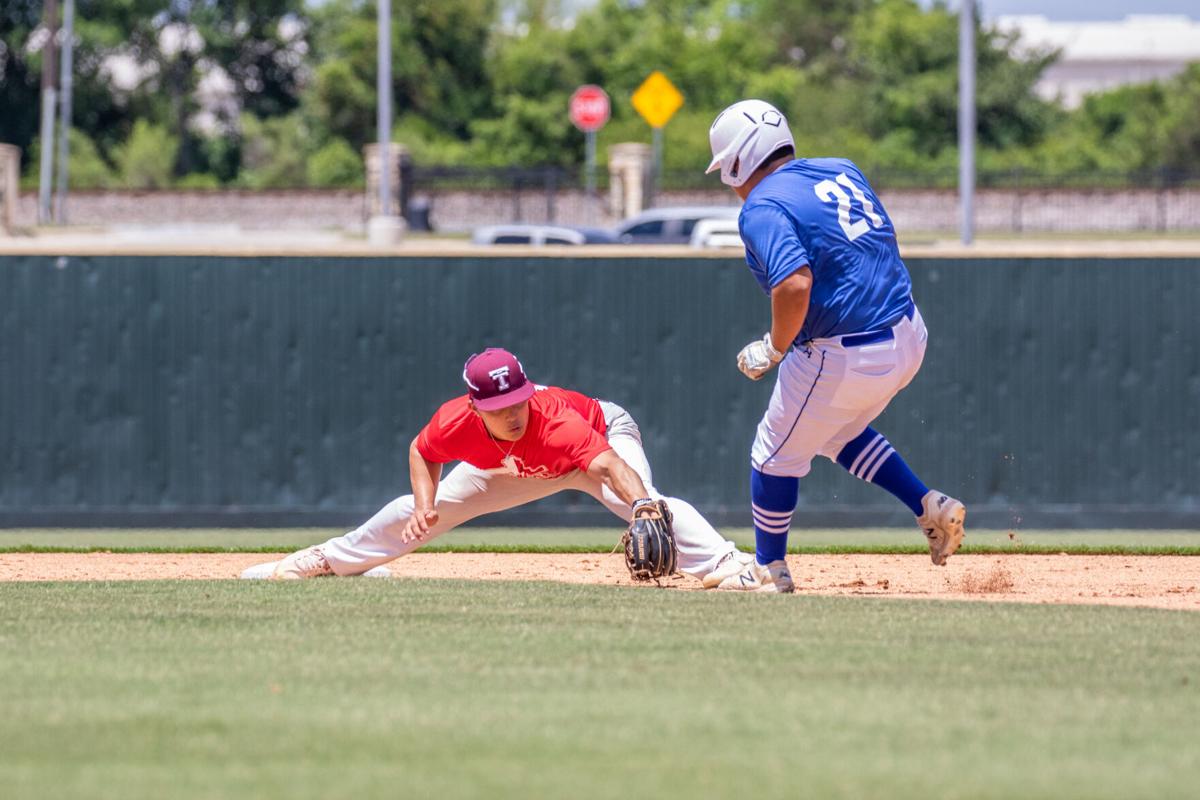 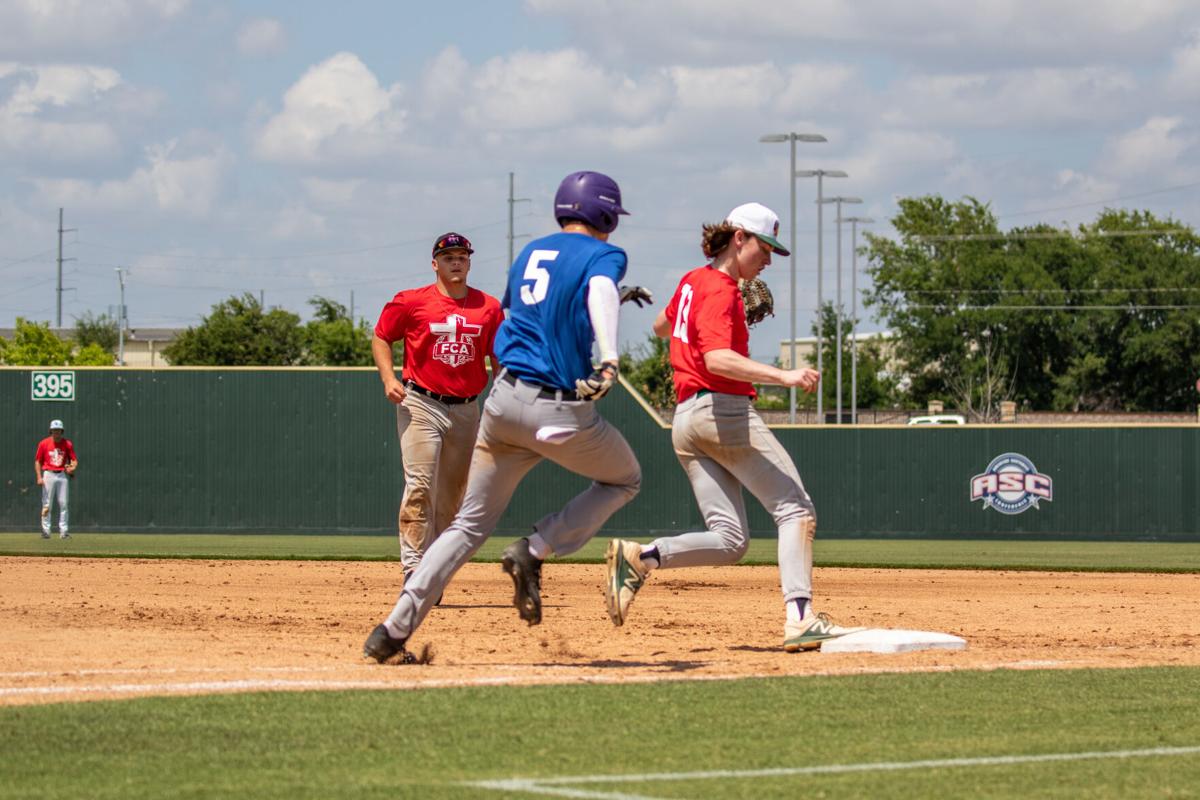 Moody's Cody Stone (1) of the Red team forces out Holland's Zane Spin (5) at first base on Friday during the Victory Bowl at Mary Hardin-Baylor in Belton. Looking on is Red team first baseman Chan Rinehart of Harker Heights.

Moody's Cody Stone (1) of the Red team forces out Holland's Zane Spin (5) at first base on Friday during the Victory Bowl at Mary Hardin-Baylor in Belton. Looking on is Red team first baseman Chan Rinehart of Harker Heights.

BELTON — Three months after they had their senior seasons taken from them by an invisible yet potent force out of their control, Rogers’ Trevor Glaser and Troy’s Kyle Torres were serendipitously reunited on the diamond Friday afternoon.

With Glaser starting on the mound for Blue and Torres digging into the left-handed batter’s box for Red, the District 19-3A foes and longtime pals opened the fifth annual Fellowship of Christian Athletes Heart of Texas Super Centex Victory Bowl baseball game facing off one last time.

The familiar moment wasn’t lost on either, and they couldn’t help but grin.

“We were both smiling the entire time. I just didn’t want to strike out because I wouldn’t have heard the end of it,” Torres said.

By the sound of it, Glaser was absolutely trying to get Torres to whiff.

“I got a little amped up,” Glaser said.

Torres, whose Red squad went ahead to stay in the top of the third inning and triumphed 8-4, avoided that strikeout and legged out an infield single that might’ve cost him, for a few days anyway, a hamstring — one of the few signs sprinkled about that there was some rust among the 26 players who gathered at pristine albeit fan-less Red Murff Field at Mary Hardin-Baylor for a game they weren’t sure three days earlier was going to get played because of the ongoing coronavirus pandemic.

However, one day after Victory Bowl organizers had decided to turn the event into practice only, Texas Gov. Greg Abbott on Wednesday further loosened social gathering restrictions, which allowed for the contest to commence as originally scheduled.

“Some of us, this was the last game we were able to play. And to be able to come out here and enjoy it with friends one last time in the field, it meant a lot,” Torres said. “I certainly had a good time.”

It was the fourth time out of five that the Red team finished victorious. Grandview’s Colby Diduch was named Red’s most valuable player and Lampasas’ Martin Ybarra earned that distinction for Blue, which overcame a 3-0 deficit with a four-run second but couldn’t keep Red at bay.

Other locals who suited up for Red were Christopher Lingo (Copperas Cove), Brennen Mata (Gatesville), Cody Stone (Moody) and Chan Rinehart (Harker Heights). They were led by Gatesville head coach David Truss, who is retiring after 30 years.

Other area athletes for Blue were Zane Spinn (Holland), Ethan Rascoe (Lampasas) and David Proctor (Academy). They were coached by Mexia’s Evan Simpson, who had on his staff Shane Doege of Lampasas and Garrett Vail of Academy.

“It would’ve been fun to do everything with all the volunteering stuff, but we were lucky we got to play,” said Glaser, referring to what transpires during a usual Victory Bowl week — community service and many more social activities that had to be scrapped this year. “We didn’t get a district season or playoffs but at least we got to play with our buds one last time.”

Mata’s RBI single scored Torres in the first to lift Red to an early 1-0 lead, which it expanded in the second to 3-0 via Diduch’s two-run double off the wall in right field.

Blue mounted its charge in the bottom of the second, scoring first through Ybarra’s RBI single. Florence’s Roy Carlson, one of two Blue players needed at various times to catch for Red, also had a run-scoring hit in the frame. Blue also scored on an error and a passed ball for its short-lived 4-3 advantage.

Red’s Mason Brandenberger (Clifton) ripped a two-run triple that pushed his team back in front, and Matthew Pevehouse (Abbott) and Stone padded the cushion with RBI singles to make it 7-4 in the third.

Lingo singled and scored in the fourth for 8-4, where it stood for the remainder of the sweltering afternoon that ended with forearm bumps instead of hive-fives but still served as a deserved send off for the recently graduated bunch.

“I feel sorry for all those guys. They missed out on their senior year. This was just a way to come together one last time and play a game they love, loved since they were kids,” Truss said. “Some of them will play down the road, some this is the end of it. But at least it gave them a chance to come together and play. It’s such a great thing. It’s a wonderful deal.”

Coaches and players prepare for all-star baseball game in Belton

For the first time since mid-March, area baseball players will lace up their cleats and don a uniform, some of them for the final time.