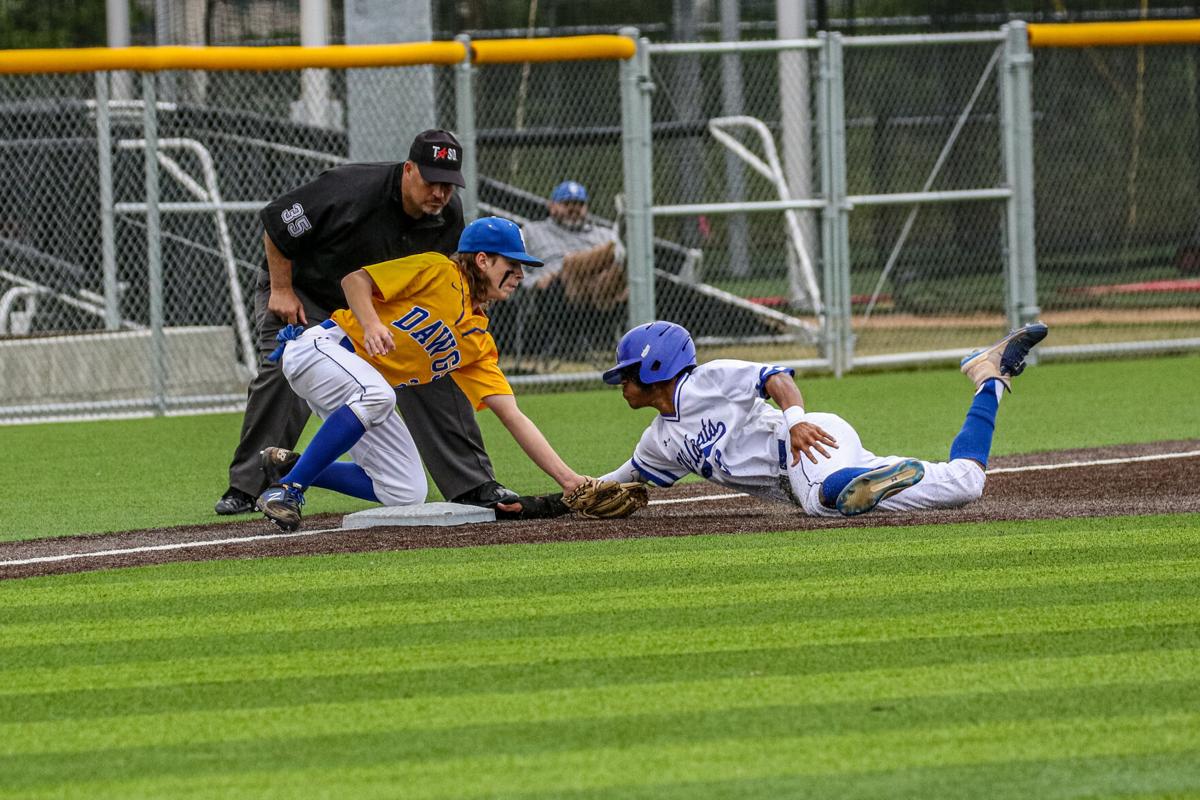 Copperas Cove’s Gannon White, left, tries to tag Temple’s Naeten Mitchell in a close play at third base on Saturday in Salado. Cove rallied from a 4-0 deficit to win 5-4 and clinch the final playoff spot in District 12-6A. 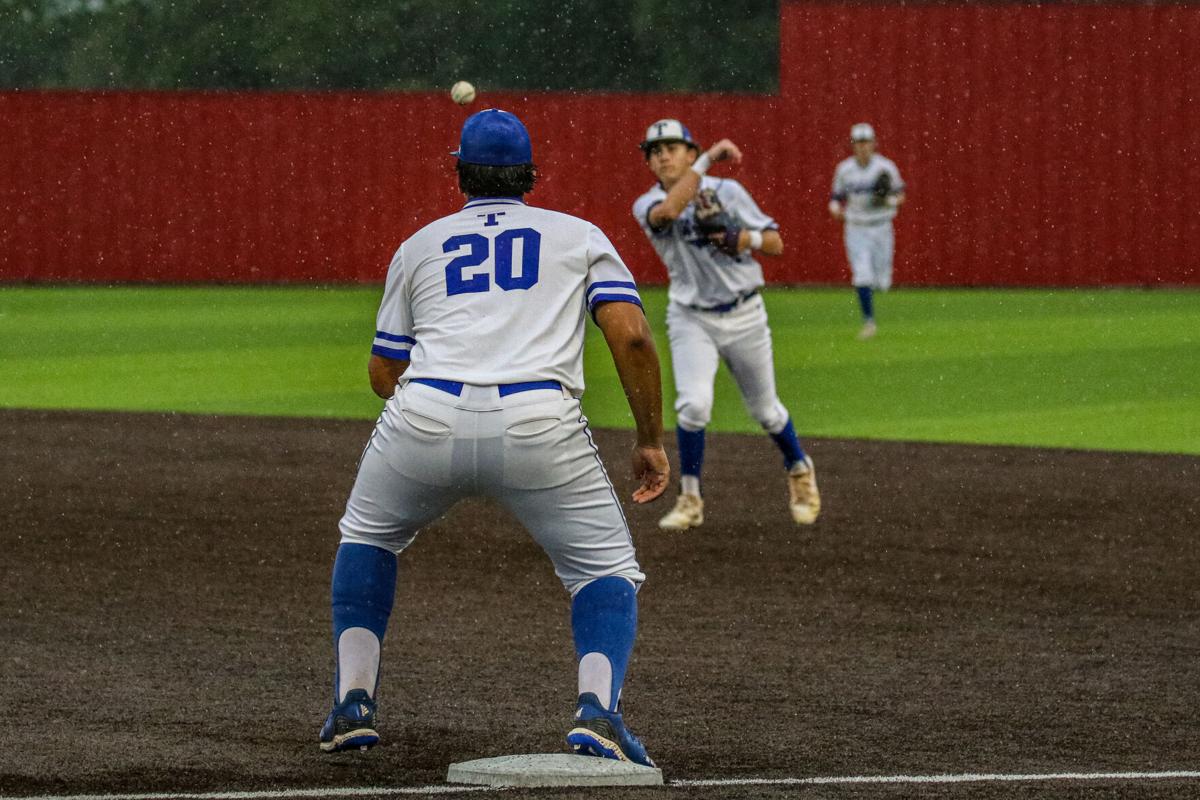 Temple’s Matthew McDonald (2) throws to first baseman Isaiah Fach (20) in the rain against Copperas Cove on Saturday in Salado. 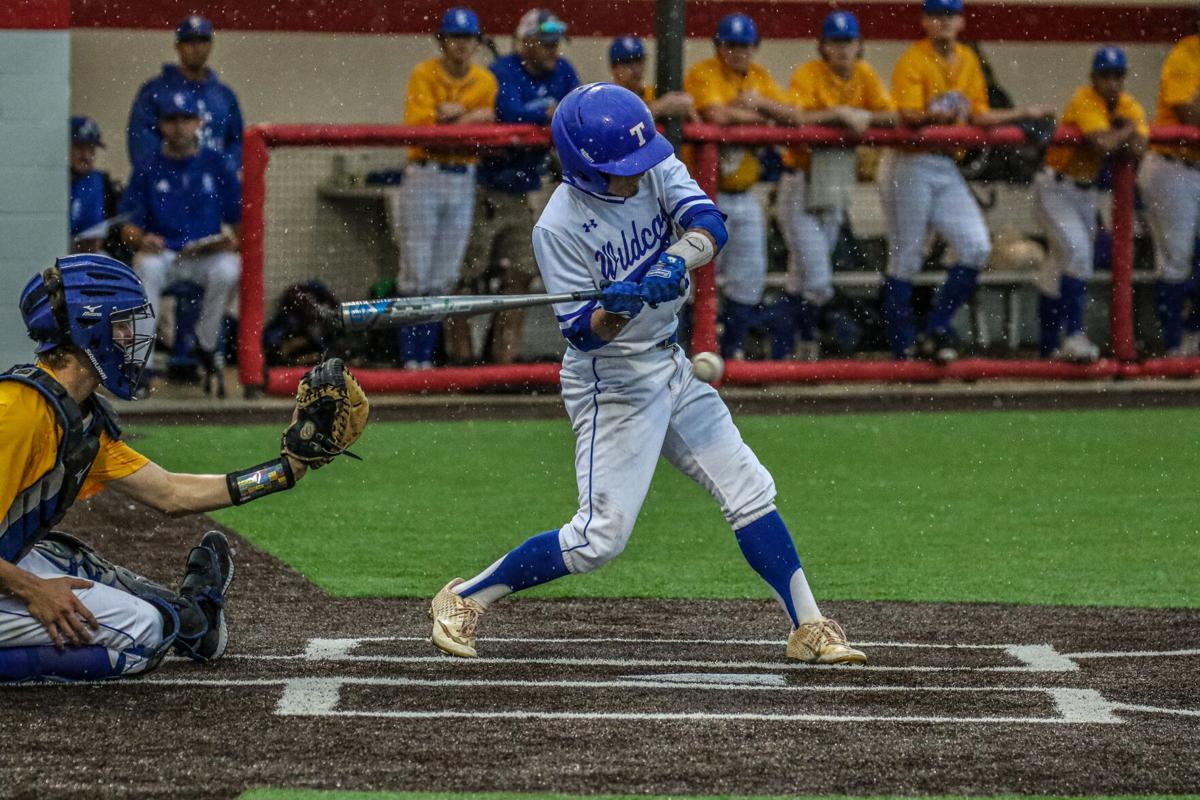 Temple’s Isaac Ramos (19) swings at a pitch with Copperas Cove’s Travis Sanders (3) catching during the rain Saturday in Salado. 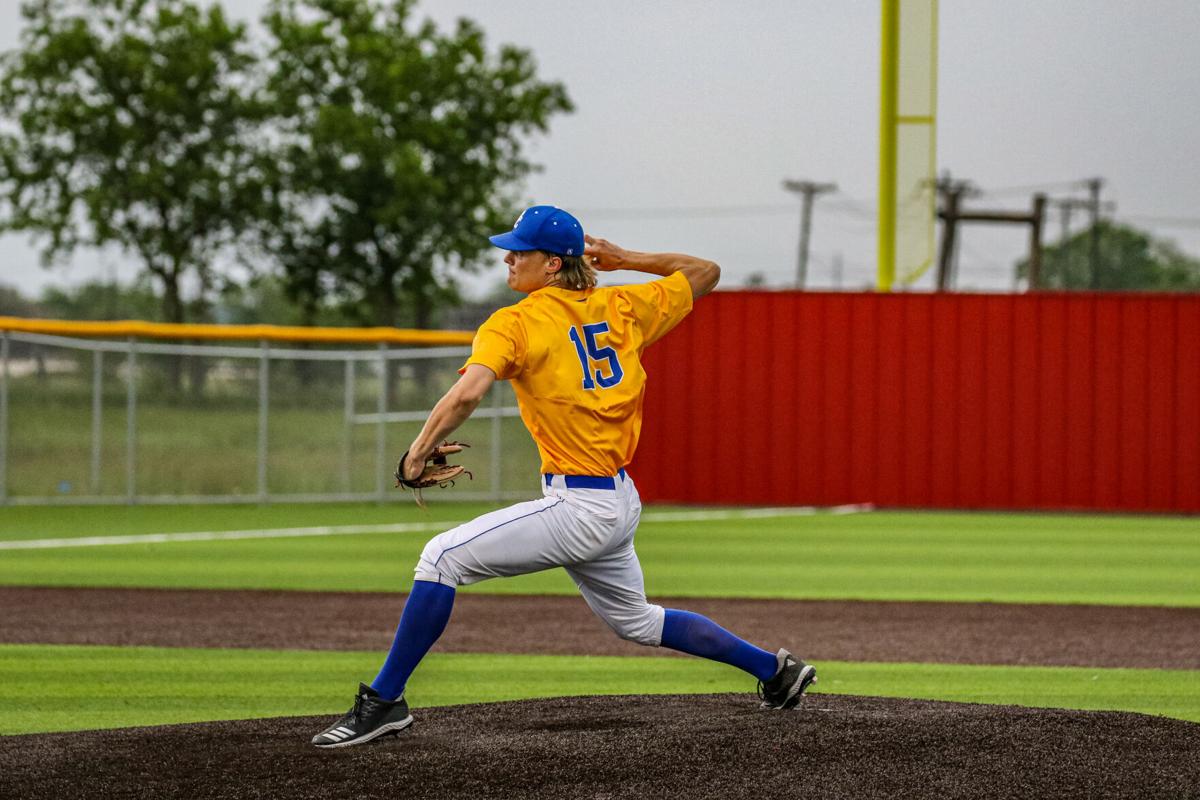 Copperas Cove’s Russel Cochran delivers a pitch against Temple in the first inning Saturday in Salado. 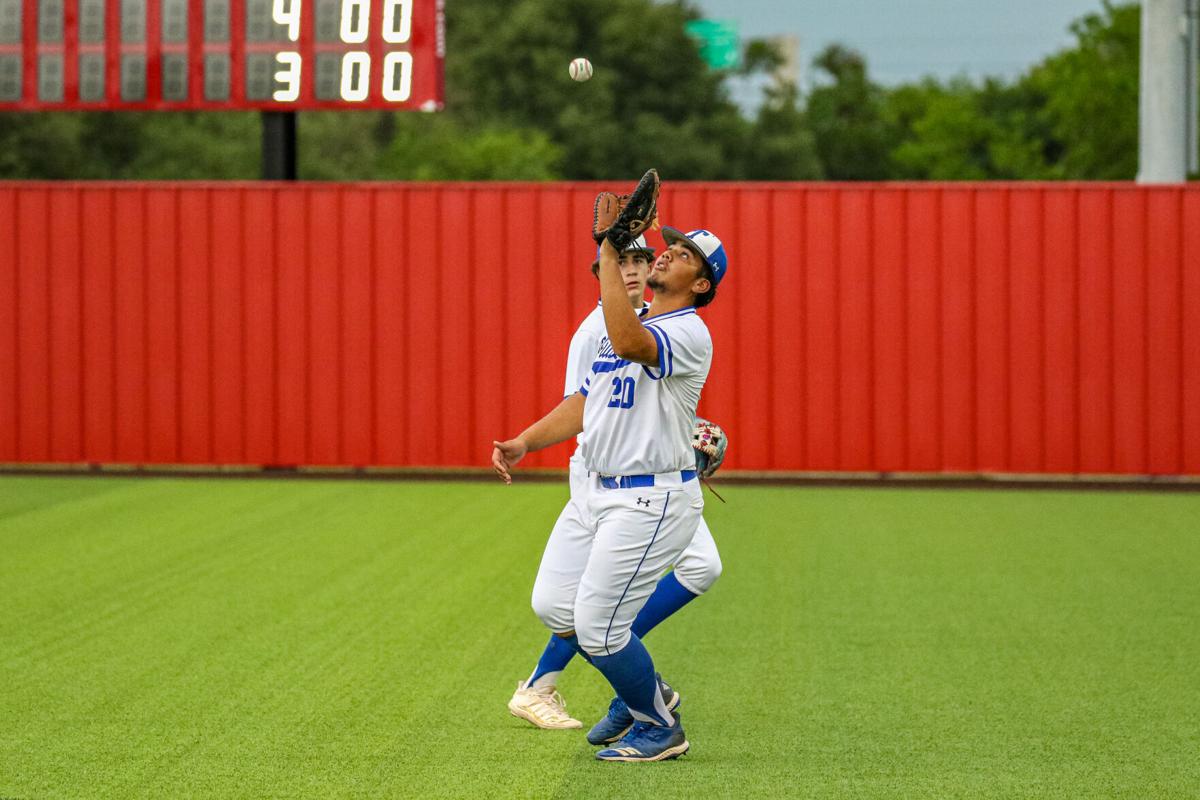 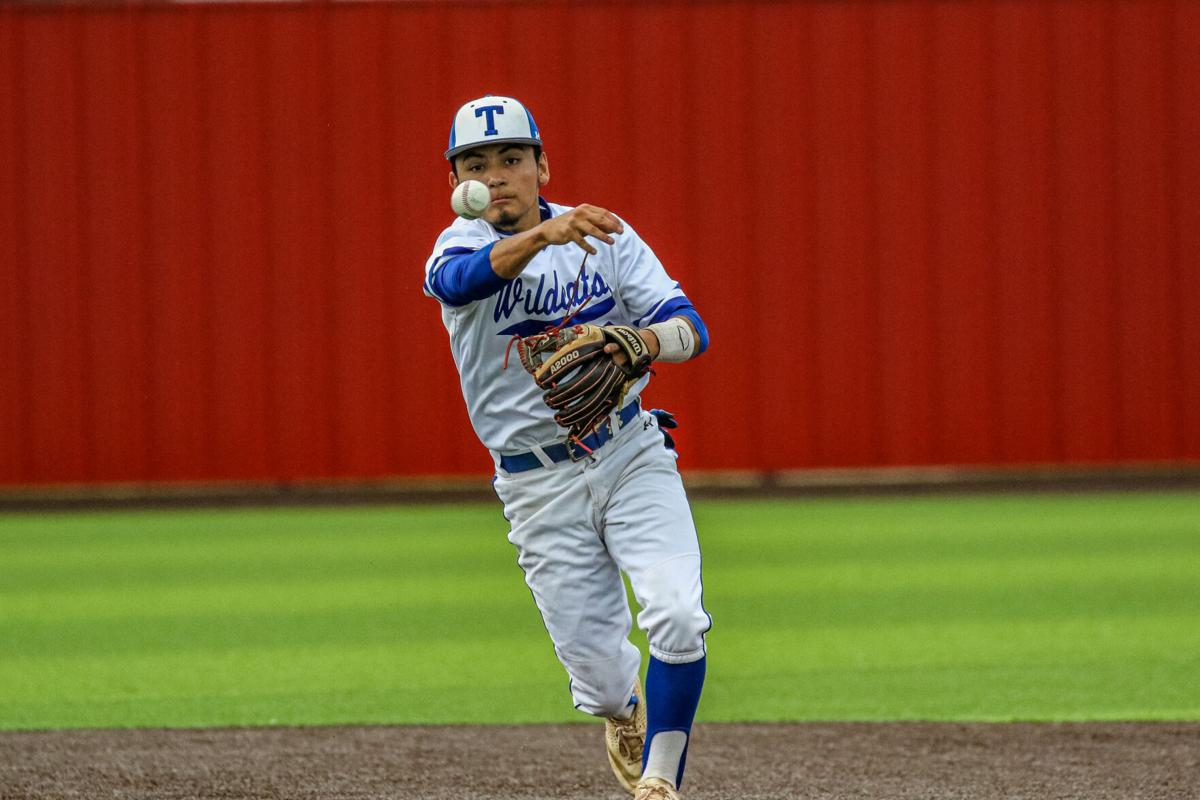 Temple’s Isaac Ramos throws to first base for an out Saturday against Copperas Cove in Salado. 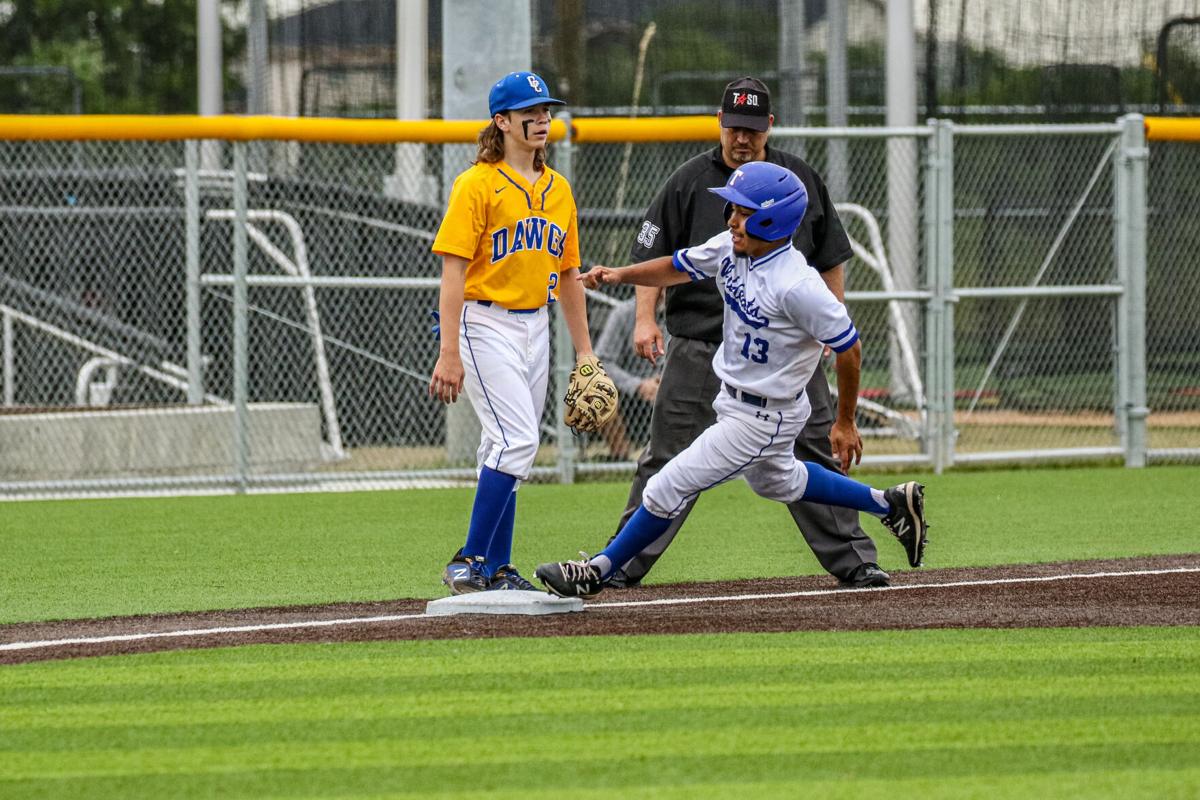 Copperas Cove’s Gannon White, left, tries to tag Temple’s Naeten Mitchell in a close play at third base on Saturday in Salado. Cove rallied from a 4-0 deficit to win 5-4 and clinch the final playoff spot in District 12-6A.

Temple’s Matthew McDonald (2) throws to first baseman Isaiah Fach (20) in the rain against Copperas Cove on Saturday in Salado.

Temple’s Isaac Ramos (19) swings at a pitch with Copperas Cove’s Travis Sanders (3) catching during the rain Saturday in Salado.

Copperas Cove’s Russel Cochran delivers a pitch against Temple in the first inning Saturday in Salado.

Temple’s Isaac Ramos throws to first base for an out Saturday against Copperas Cove in Salado.

SALADO — As the rain turned from shower to downpour, the Copperas Cove Bulldawgs went into a celebratory slide on the slick turf behind third base at Salado’s increasingly soggy sports complex.

Along the other baseline, the Temple Wildcats consoled one another with emotional embraces from one teammate to the next.

Standing outside his team’s dugout with water dripping from the bill of his cap, Temple head coach Dallas Robertson summed up everything using a short, concise, albeit rather thought-provoking, statement.

“The game of baseball, man,” he said.

Very true. This game in particular Saturday afternoon had with it a playoff spot for the survivor of a fourth-place District 12-6A tiebreaker between the Wildcats and Bulldawgs — a contest needed after Temple defeated Cove on Tuesday in the regular-season finale to cap a must-have three-game winning streak to get itself back into postseason contention.

A four-run top of the first had the Wildcats in the driver’s seat early, but the Bulldawgs steadied after their initial stumble and chipped away at the deficit. They eventually tied it in the fifth on a balk and went ahead in the sixth on an error for a 5-4 victory and an extra week of their 2021 season.

“One of the best games I’ve ever coached, just because of the first inning, really. It’s very easy to lay down. But credit to these guys. These guys are tough,” said Cove coach Bryant Lopez, whose squad endured a five-run Temple outburst in the first inning of Tuesday’s encounter and never recovered. “We always break out to ‘F.T.A’ — fast,

tough and alert baseball. Tough baseball is what came in to play today. It was all toughness today.”

Resurrected by the three straight victories after a five-game slide knocked it from first into a tie for fifth with a week and a half left, Temple’s season closed at 18-12.

The one-run margin was the Wildcats’ 12th outing decided by three runs or fewer. They were 2-4 in one-run ball games.

“These guys wanted it. They fought and we’re proud of them,” Robertson said. “We had great senior leadership. We didn’t reach our goal but they fought the whole way.”

With Bryan Williams on the mound for Temple sporting a 4-0 lead before he faced a batter, Cove’s climb had some level of steep to it. The Bulldawgs got one run back when Jace Johnson, who singled to lead off Cove’s half of the opening frame, scored on a wild pitch. And they picked up two more in the second when Dekan Radigan drove in Gabriel Chapman and Antonio Espinoza with a double to make it 4-3.

Meanwhile, Cove starter Russel Cochran, who labored through eight batters during Temple’s first, settled in and allowed just three hits over the course of the second, third, fourth and fifth innings to keep the Wildcats within sight.

Cove caught Temple at 4 with two outs in the fifth. Travis Sanders doubled down the line in left then with a heads-up play moved up to third when the relay throw into the infield went behind him as he rounded second base.

The Texas Tech commit scored when Williams was called for a balk with Cochran in the box down 0-2 in the count. Williams and Robertson didn’t agree with the ruling, though it was the result Sanders said he was essentially trying to create.

“I knew we needed to scratch across another run. Honestly, I’ve done it before. Just run out there a little bit, pitcher sees you out of the corner of his eye and flinches a little bit,” Sanders said. “Sure enough, I got that back knee to move.”

In the sixth, Caden Harris sent a sinking line drive into left that Kobe Smith dived for but couldn’t come up with, and the ball rolled to the wall for a triple. The next batter, Espinoza, popped up a bunt that Williams caught and in trying to double-up Harris at third, sailed a throw through the rain into left, and Harris scored to put Cove ahead 5-4.

“I don’t think the rain was a factor. We definitely caught a break” Lopez said. “I’m just proud of these guys for battling.”

Sanders, who took over for Cochran on the mound, allowed two hits and struck out three over the final two innings for the win. Williams singled with one out in the seventh and stole second. Sanders, however, stranded the potential tying run with a strikeout and pop out to seal the win.

Johnny Donoso was 3-for-4 with three singles for Temple, which finished with eight hits. Sanders went 2-for-3 for Cove, which had seven hits.

The Wildcats scored their four runs before an out in the first. Aaron Wagaman and Naeten Mitchell each had RBI singles, and two other runs scored via errors.

“I’m proud of everybody. The way we pushed through this whole season — pushed as a team,” Williams said. “It’s never been a selfish game for us. We always did something for each other instead of ourselves.”

WHITNEY — Bryan Waller admits it — his team is not ready yet.