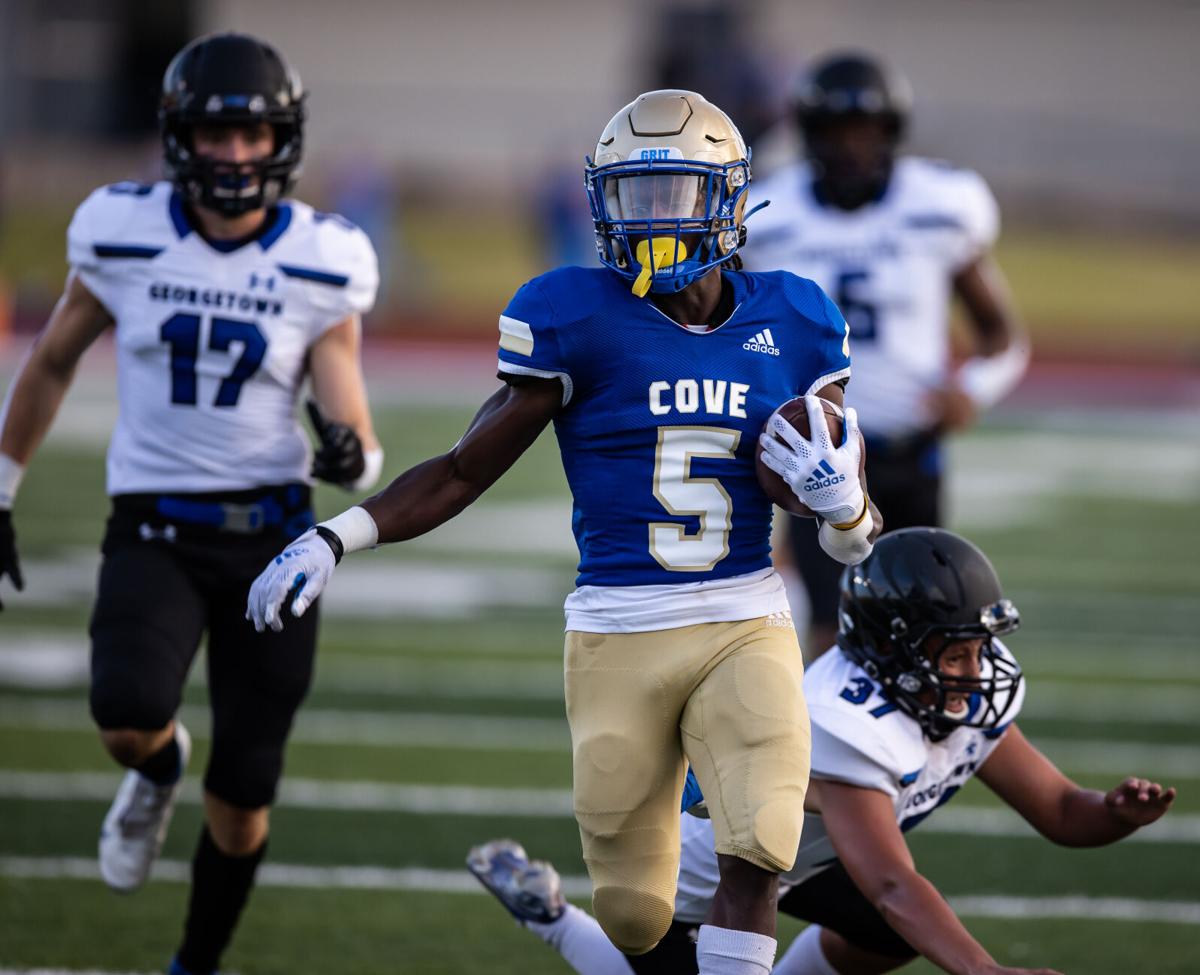 Copperas Cove's Malcom Roberts (5) evades Georgetown's Carson Sauseda (37) and other tacklers and returns a kickoff for a score at Bulldawg Stadium on Friday, Sept. 3, 2021. 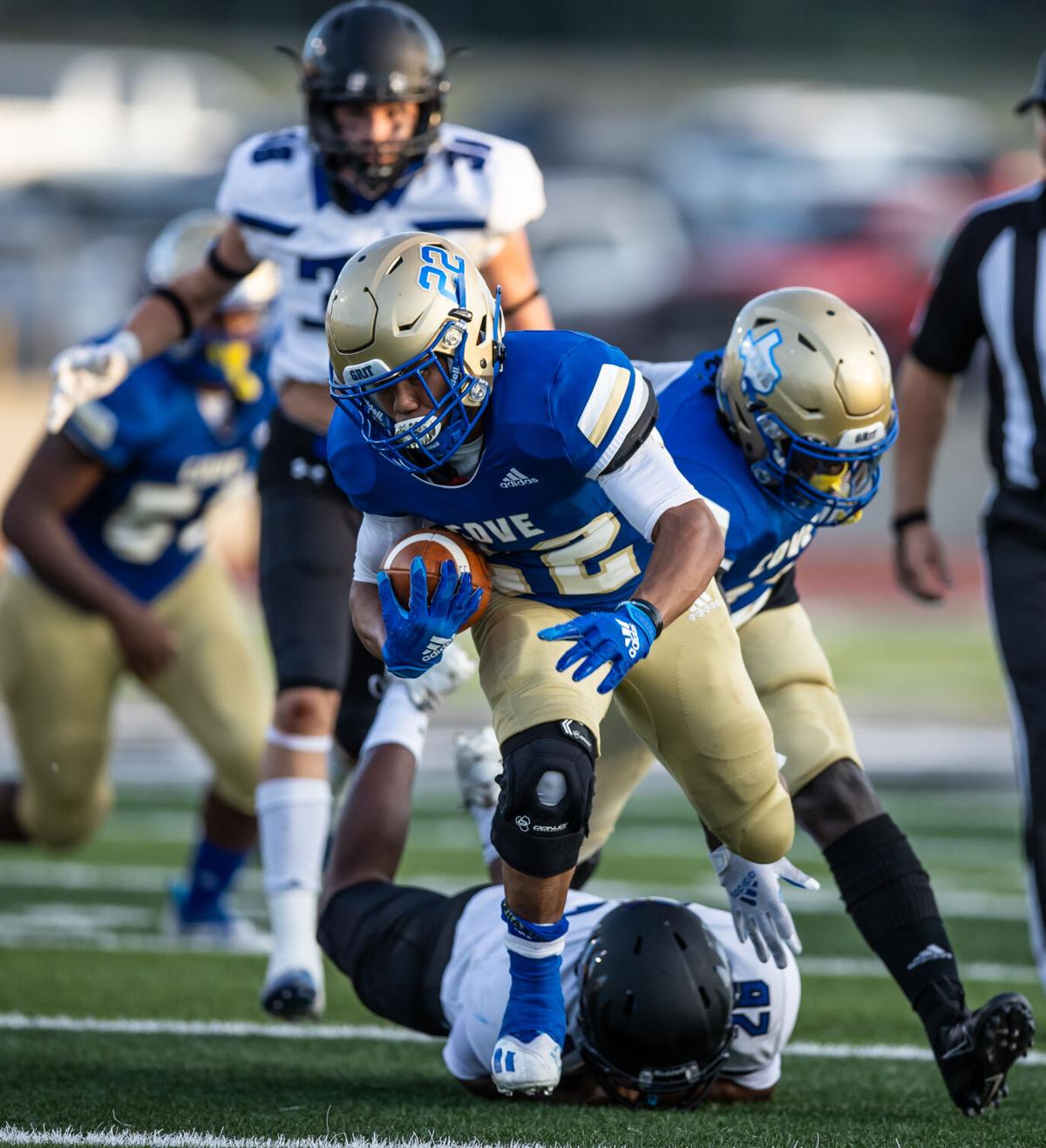 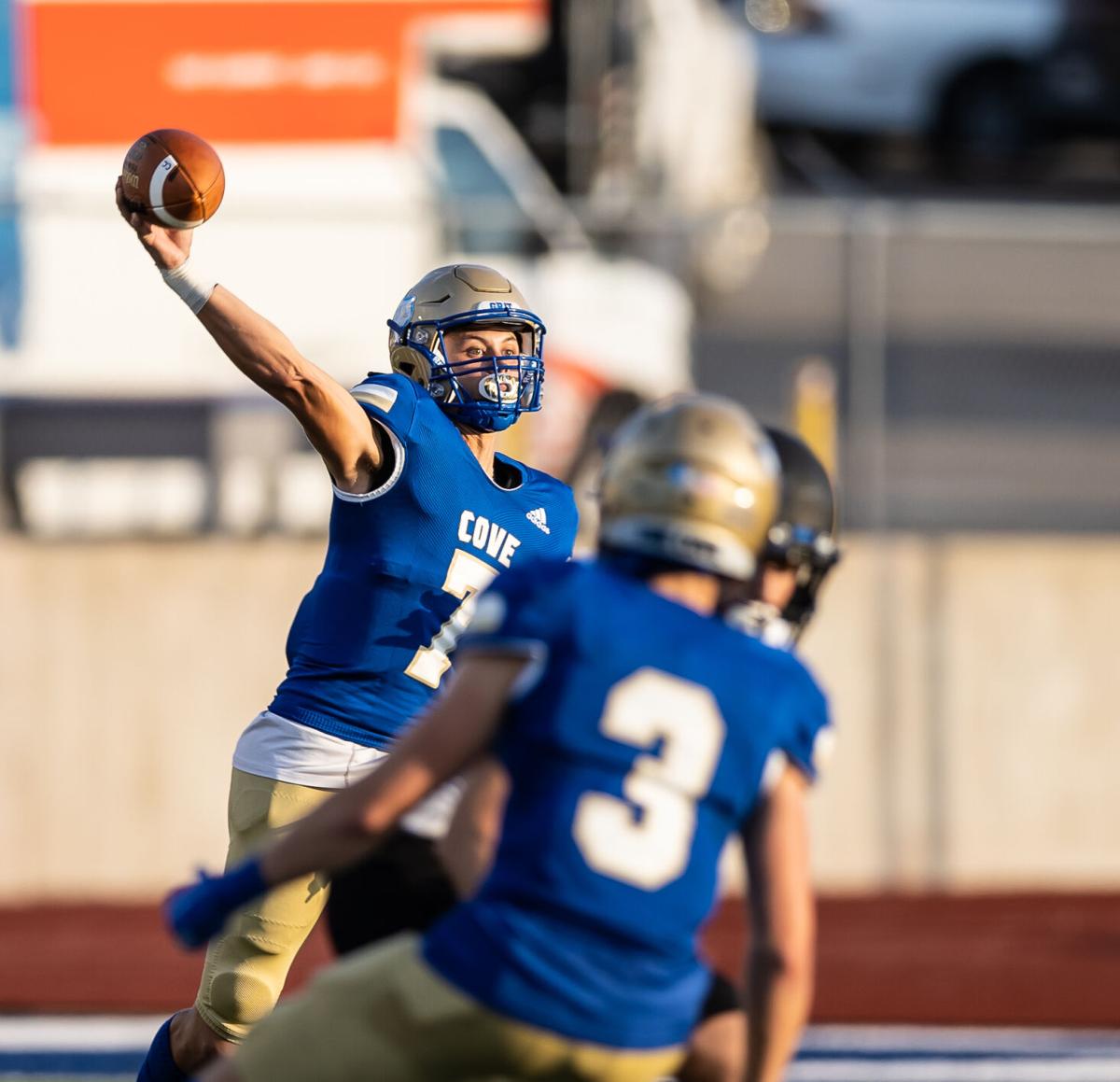 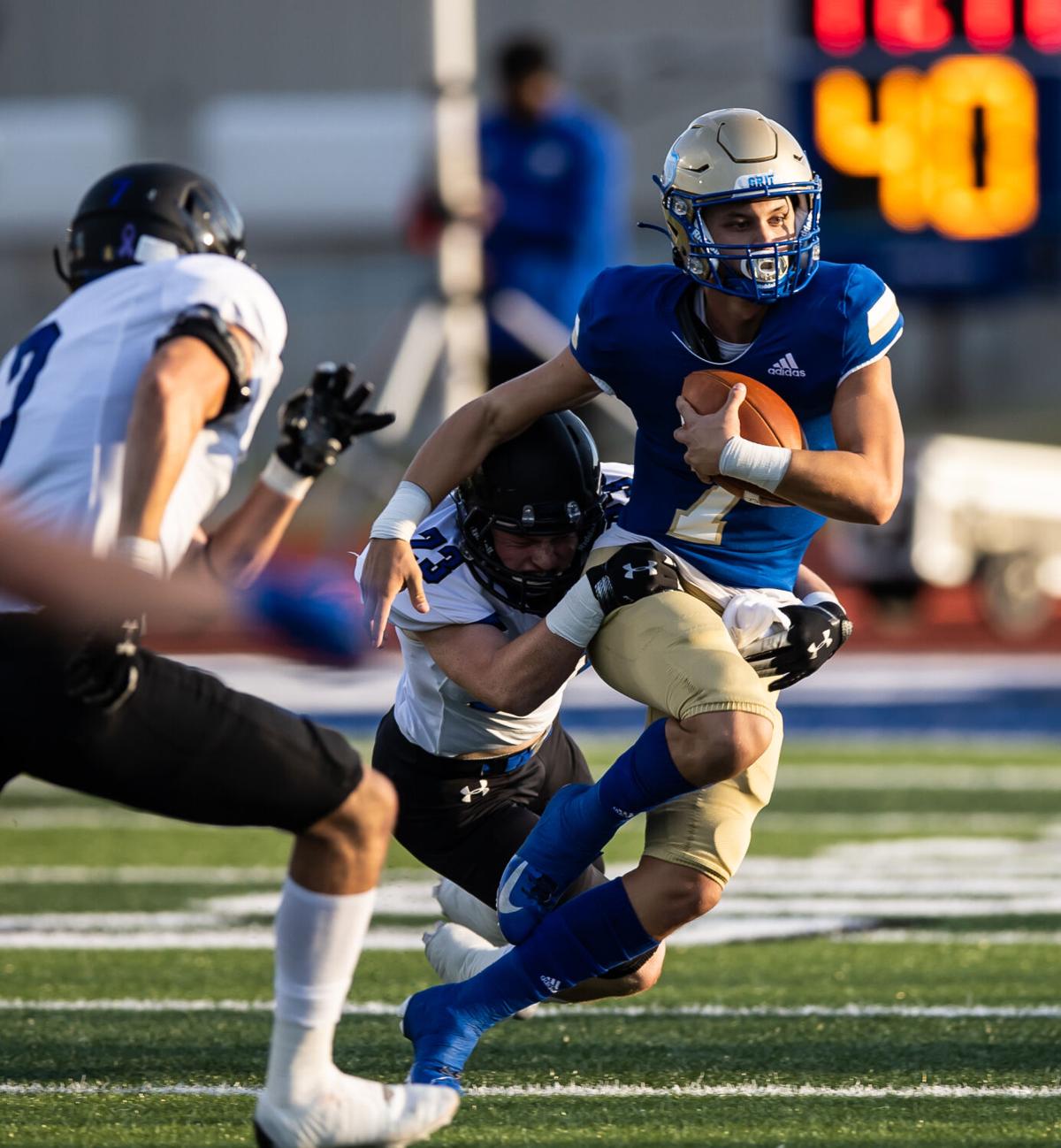 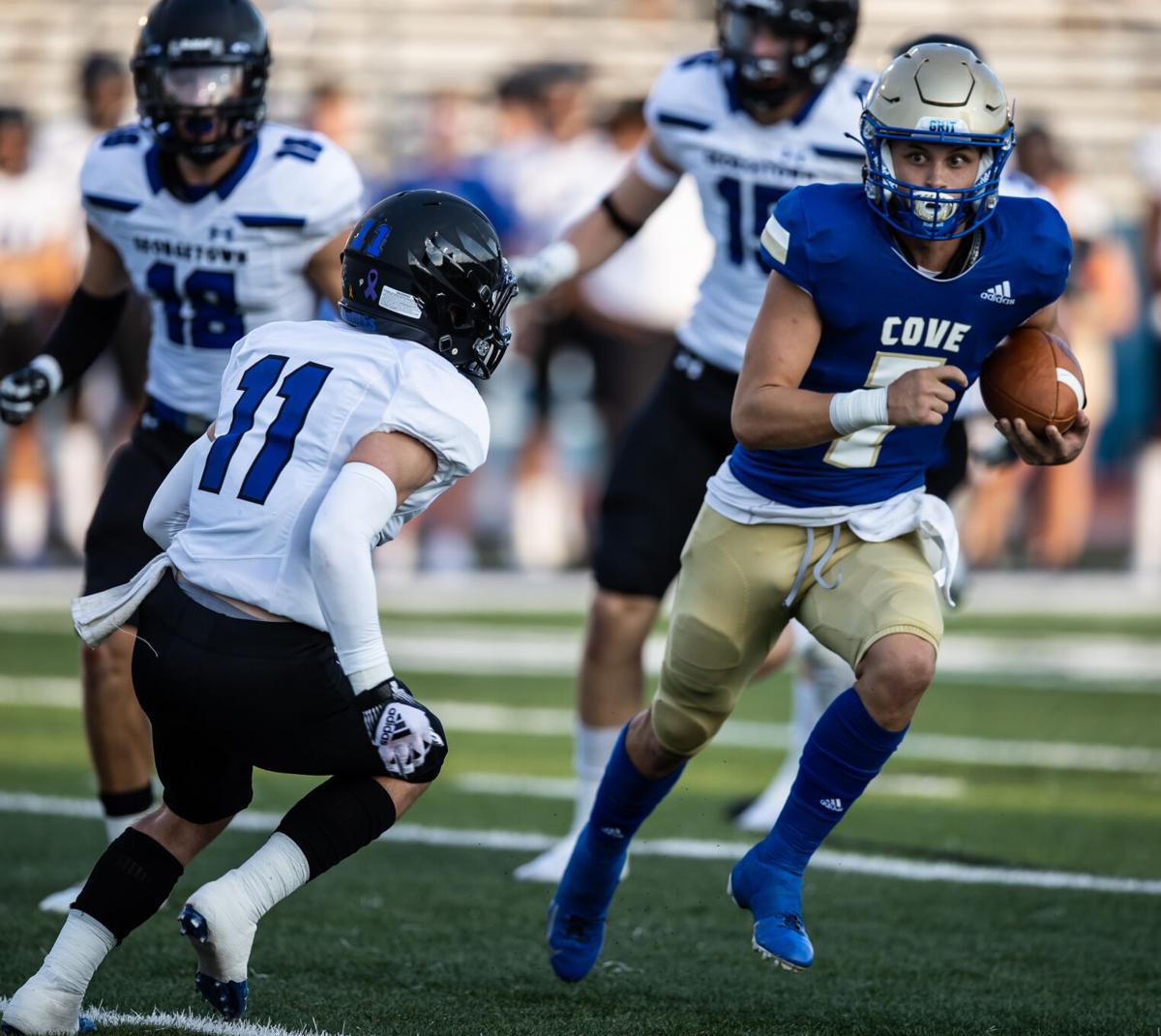 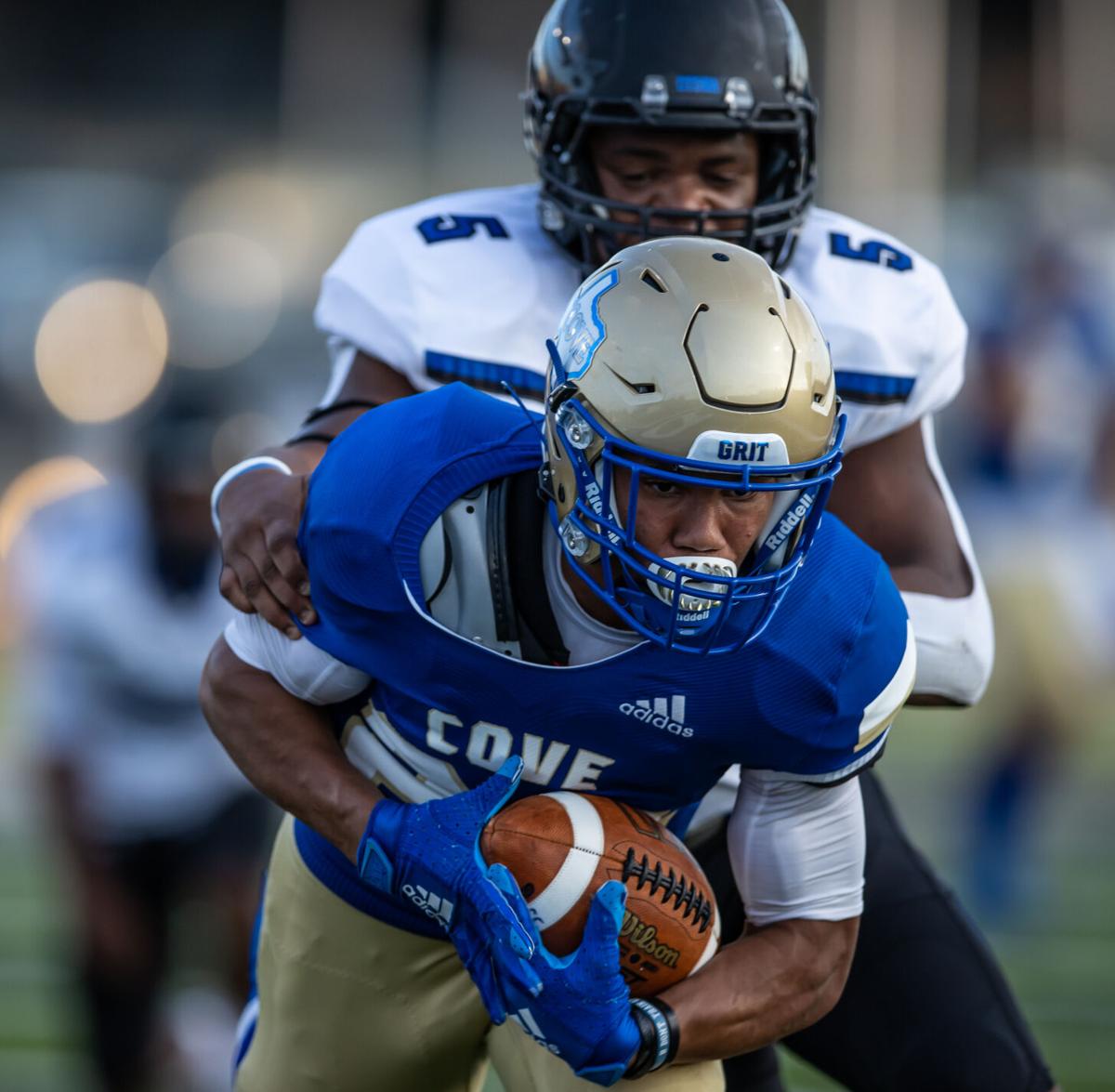 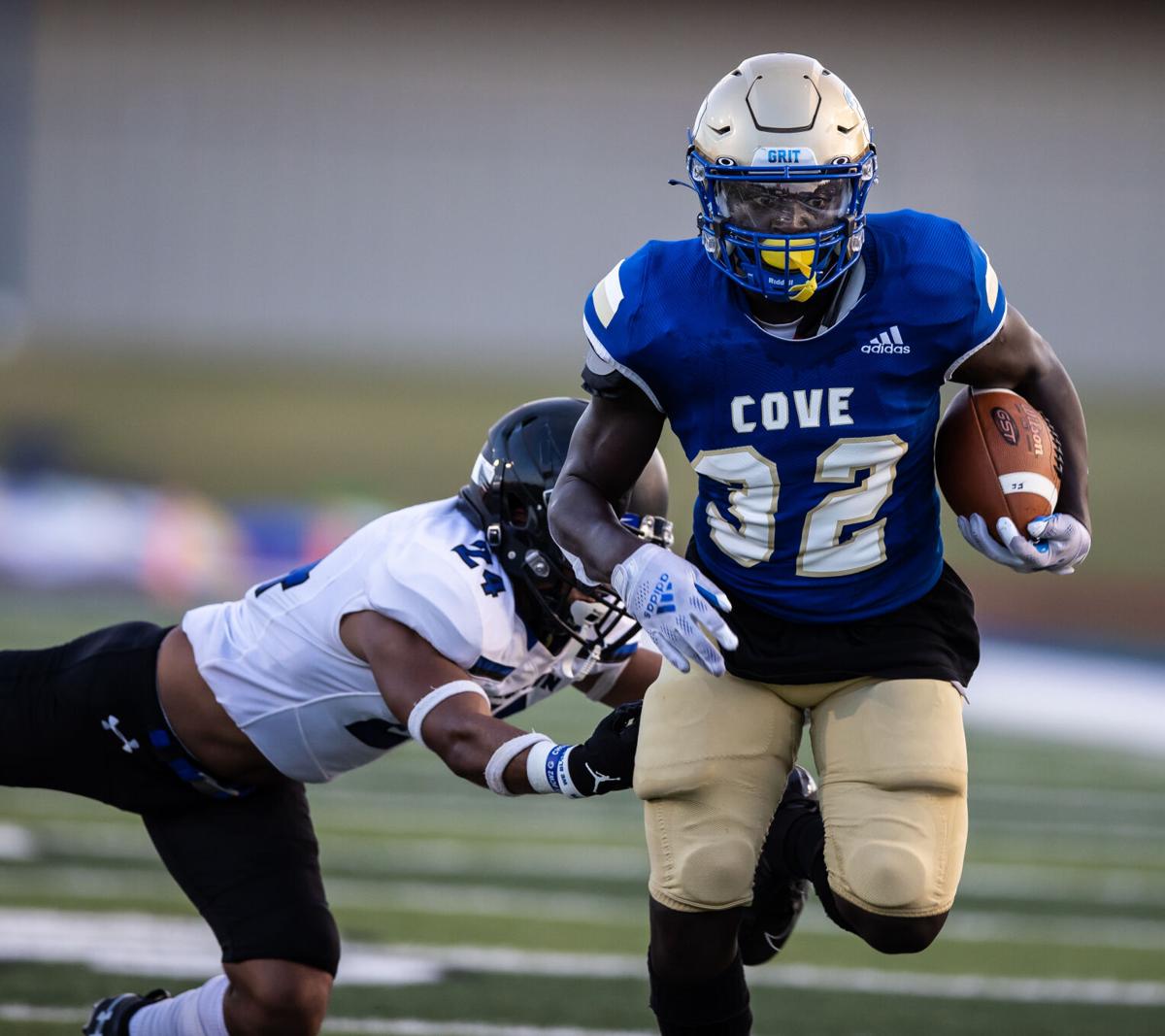 Copperas Cove's Craig Brown (32) escapes a tackle by Georgetown's Gabriel Denova (24) and runs 36 yards for a touchdown at Bulldawg Stadium on Friday, Sept. 3, 2021. 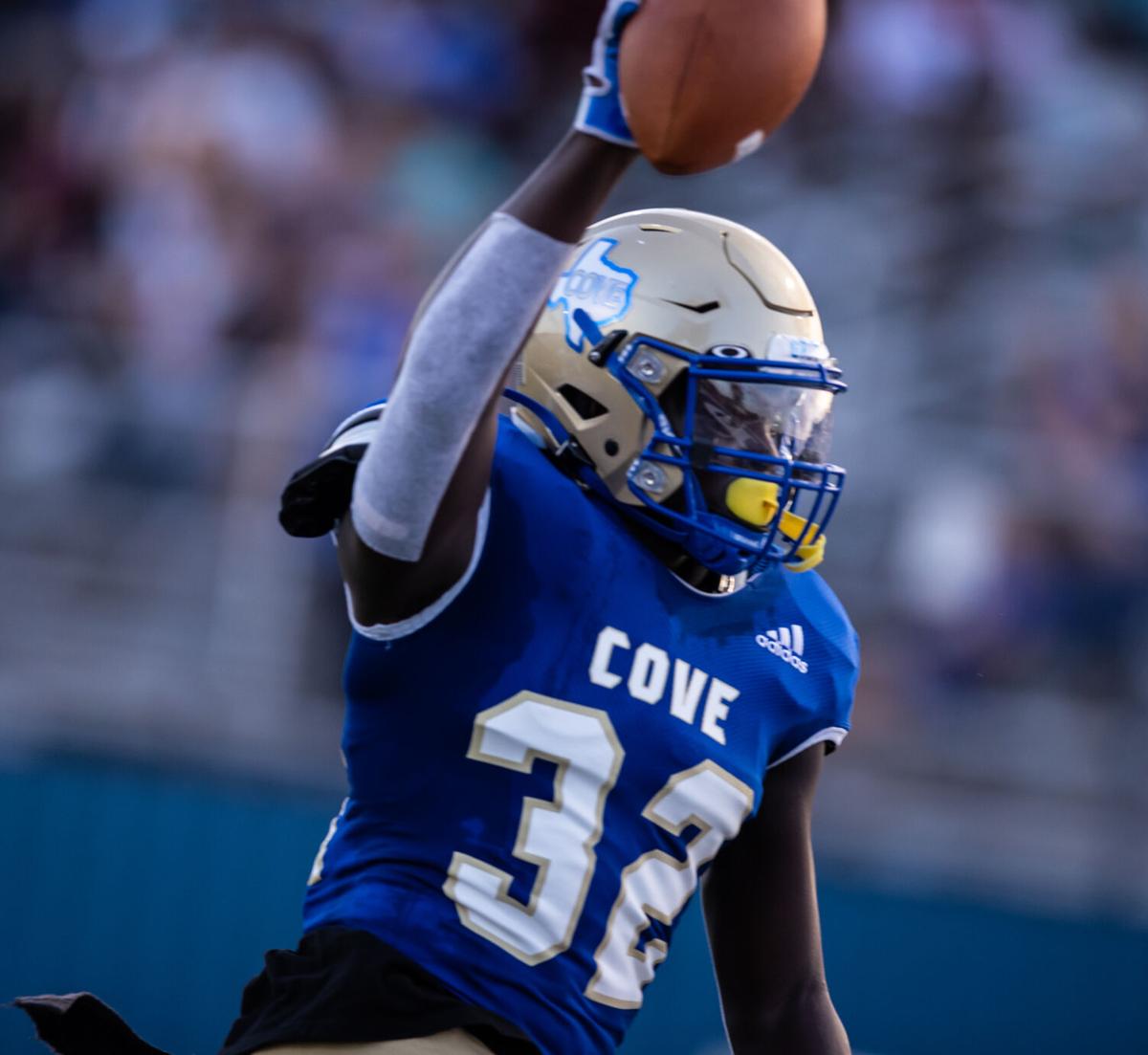 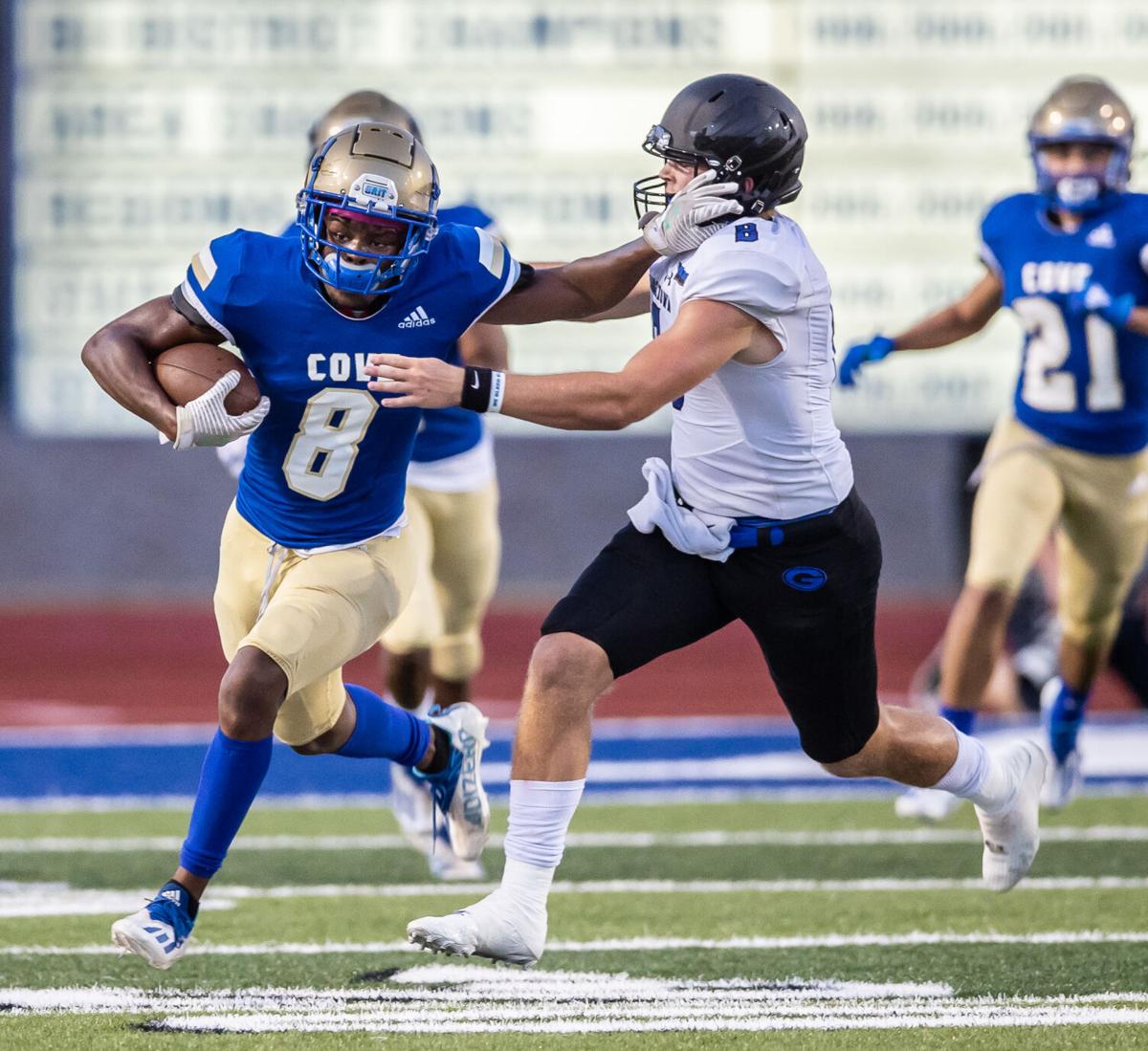 Copperas Cove's Ja'Coby Frazier (8) intercepts a pass from Georgetown's Darson Herman (8) who is attempting to tackle him at Bulldawg Stadium on Friday, Sept. 3, 2021. 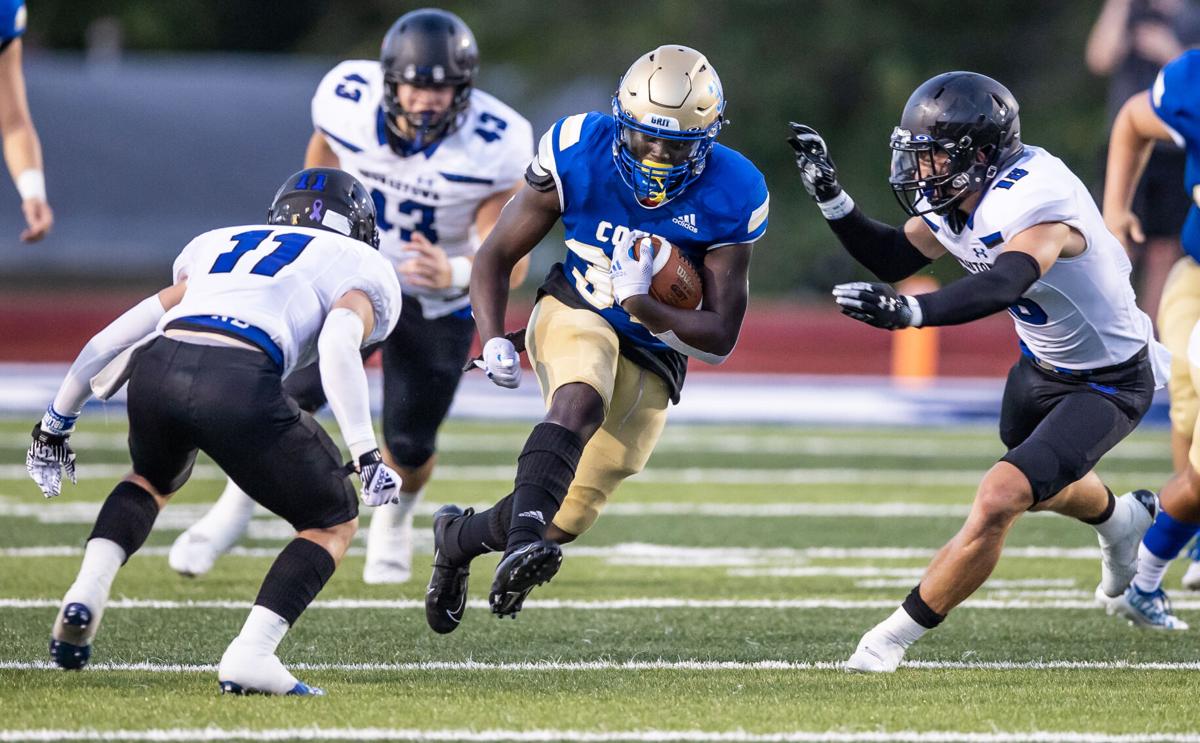 Copperas Cove's Malcom Roberts (5) evades Georgetown's Carson Sauseda (37) and other tacklers and returns a kickoff for a score at Bulldawg Stadium on Friday, Sept. 3, 2021.

Copperas Cove's Craig Brown (32) escapes a tackle by Georgetown's Gabriel Denova (24) and runs 36 yards for a touchdown at Bulldawg Stadium on Friday, Sept. 3, 2021.

Copperas Cove's Ja'Coby Frazier (8) intercepts a pass from Georgetown's Darson Herman (8) who is attempting to tackle him at Bulldawg Stadium on Friday, Sept. 3, 2021.

COPPERAS COVE — The Copperas Cove Bulldawgs showed life in the third quarter Friday evening as they fought hard to chip into a 16-point deficit against the Georgetown Eagles.

Unfortunately, the furious second-half charge ended nearly as abruptly as it started. Georgetown turned a three-point lead late in the game into a blowout 63-39 win.

Head coach Jason Hammett said after the game that, simply put, the team did not make enough plays down the stretch.

He added that throughout the game, all facets of the team had good plays, and they all had bad plays.

Trailing 35-19, the Bulldawgs rode the momentum of a 50-yard screen pass from Shane Richey to Craig Brown to push them inside the Georgetown 10-yard line.

One play later, Malcom Roberts scored from 6 yards out and kept it for the two-point conversion to cut Georgetown's lead to 35-27.

After an onside pooch kick was recovered by the Bulldawgs, they took it 38 yards in six plays. They capitalized on the good field position as Bra'dyn Brooks-Smith ran it in for a 23-yard score. The two-point pass attempt failed, making it 35-33 Georgetown.

A seven-play drive by the Eagles on the ensuing drive extended the lead to nine points as quarterback Darson Herman kept it himself on a 1-yard run. The score extended the Eagle lead to 42-33.

On the next drive, Roberts accounted for more than 50 yards on the ground, ultimately scoring from 11 yards out. A missed extra point attempt kept the Bulldawgs within 3 — 42-39 — and that’s as close as it got.

Offensively for the Bulldawgs, the platoon of Roberts, Brown and Brooks-Smith in the backfield churned out another 200-yard rushing performance, this week putting up 242 yards on the ground. Richey added 35 yards on the ground, bringing the team total to 277.

“They’re competitors,” Hammett said about the three running backs. “They are full-effort guys ... they’re fighting for yards every play.”

As he did against Round Rock Stony Point last week, Brown racked up the most rushing yards, going for 116 on 19 carries. He added a touchdown in the first half.

Brooks-Smith rushed for 72 yards and a pair of touchdowns.

Roberts had 54 rushing yards and two touchdowns on the ground as well as an 83-yard kickoff return for a touchdown.

Hammett said he thought the Bulldawgs played with more emotion and composure than they did in the 69-27 loss to Stony Point last week.

“Last week, we were emotionally up and down way too much,” Hammett said. “Tonight, our kids showed a lot more controlled composure.”

He added that it comes down to individual kids making individual plays.

“Once you’ve coached them and gotten them in the right spot, when it comes to making a tough play, a kid’s gotta make a tough play at some point,” Hammett said. “You know, we’re waiting on a couple situations like that where we’ve got kids we believe in at positions, and they’re getting better, but at some point, you gotta go make a play.”

The first quarter also proved to be a fast-paced back-and-forth affair with a slew of big plays from both teams.

The Eagles got things started quickly Friday evening, driving 93 yards to score. Herman found Marquis Dominguez for 41 yards as he was getting hit. The opening score came with 7:17 left in the first quarter that featured a total of 40 points.

Copperas Cove quickly returned the favor, riding a steady ground attack, capped off with a 32-yard touchdown run by Brooks-Smith.

Brooks-Smith redeemed the drive that had a would-be 56-yard touchdown run by Richey wiped off the board with a holding call.

On the ensuing kickoff, Drayden Dickmann of Georgetown returned the ball 73 yards to the Cove 2-yard line, setting up a one-play scoring drive, with Andrew Petter punching it in.

Roberts answered with a huge kickoff return of his own, taking it 83 yards to the house and a touchdown for the Bulldawgs.

It was the Bulldawgs’ second kickoff return for a touchdown this season, as Brooks-Smith had an 82-yarder last week against the Stony Point Tigers.

A missed extra point made it 14-13 Georgetown.

A few plays later, Eagle running back Devin Ross ran it in from 5 yards out after Herman scrambled for 56 yards to set them up inside the Copperas Cove 10.

On the ensuing drive, the Bulldawgs found the end zone again, this time a 36-yard run by Brown.

In the second quarter, Herman found Dickmann for a pair of scoring plays — one for 50 yards, and the other a 13-yard pass.

Defensively in the first half, Cove junior linebacker Ja’coby Frazier stymied two Georgetown drives. On the final drive of the first quarter, Frazier blitzed and rushed unabated to sack Herman to set the Eagles up with third-and-long.

In the second quarter, Frazier stepped in front of a Herman pass for an interception deep in Cove territory.

Copperas Cove (0-2) goes back on the road to take on Austin Bowie next week.

“As we work this week, we’re going to keep talking about responding,” Hammett said. “And how we respond to this loss goes back to the film room tomorrow and look at the mistakes we’re making and how to fix them.”

It was a stellar start to the season.