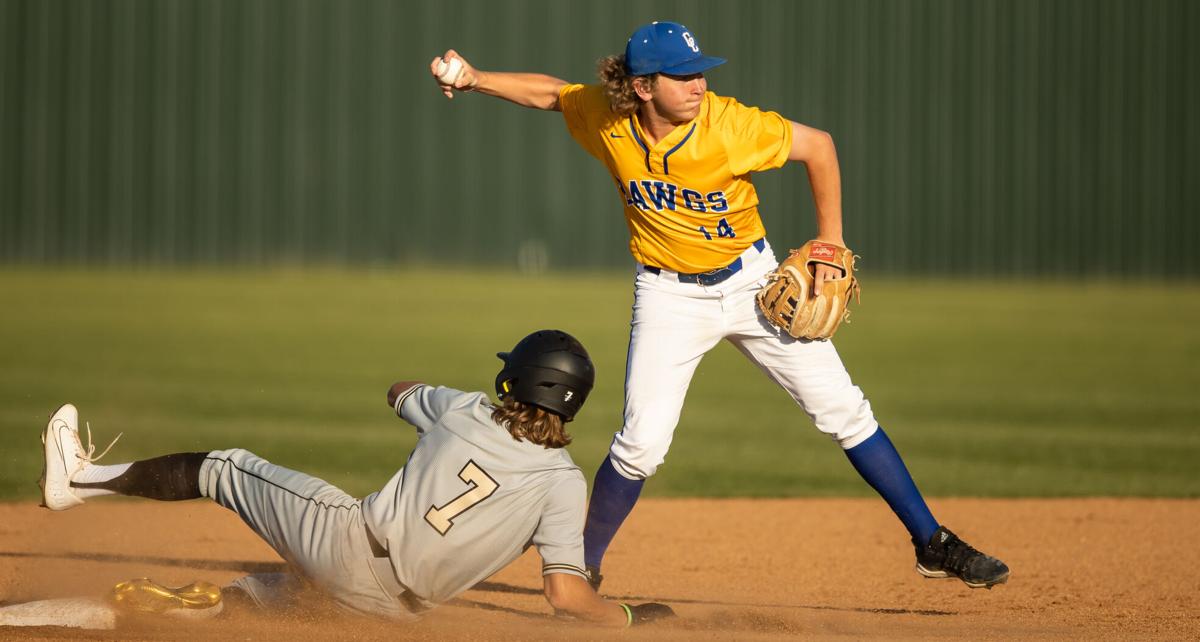 Copperas Cove’s Dekan Radigan (14) throws to first base after getting a forceout of Mansfield’s Reid Rios (7) at second base on Friday in Copperas Cove. 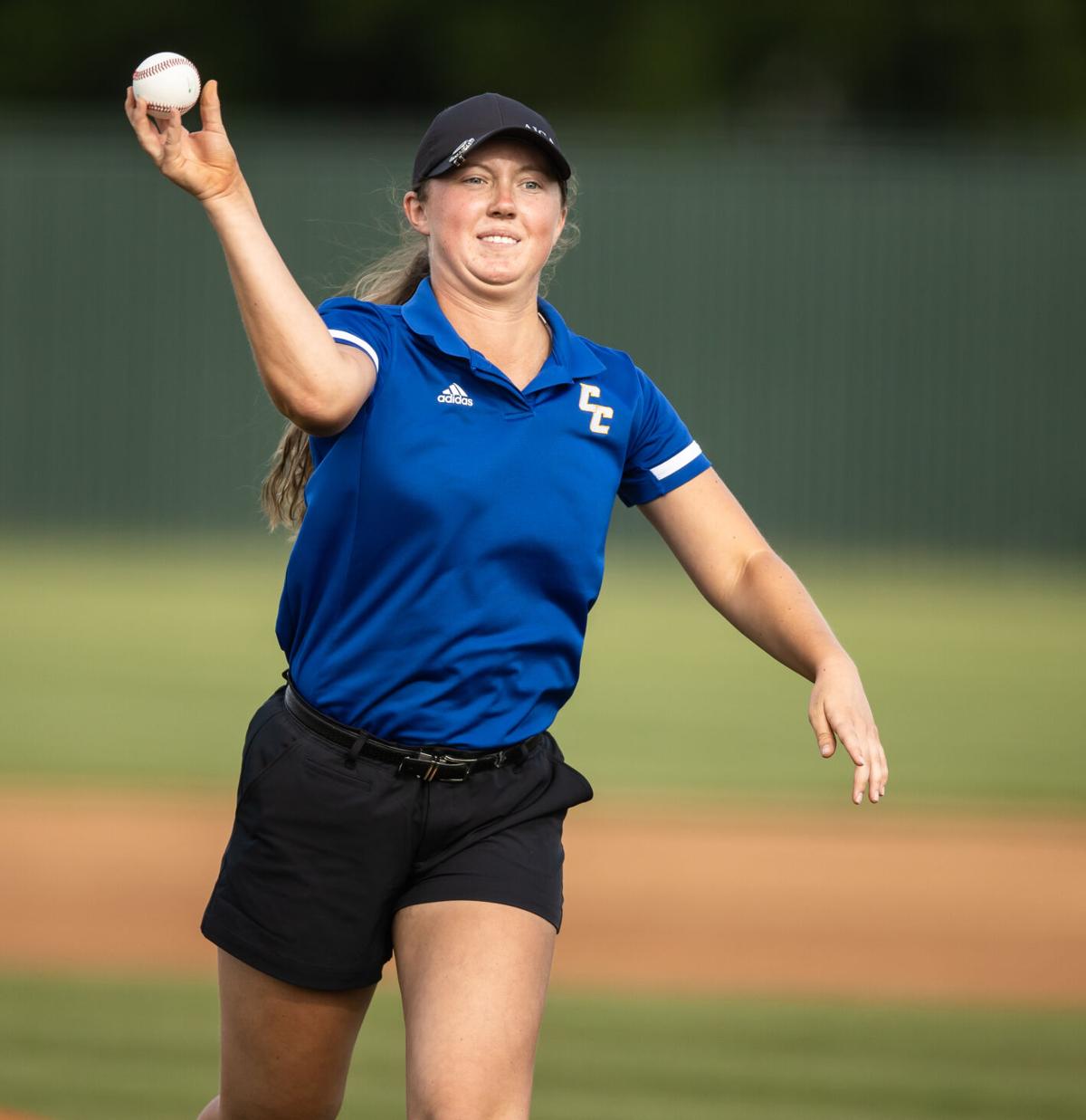 Copperas Cove golfer Elle Fox throws out the first pitch before the Bulldawgs' playoff series opener with Mansfield on Friday in Copperas Cove. Fox will be the first Cove girls golfer to compete in the state tournament on Monday. 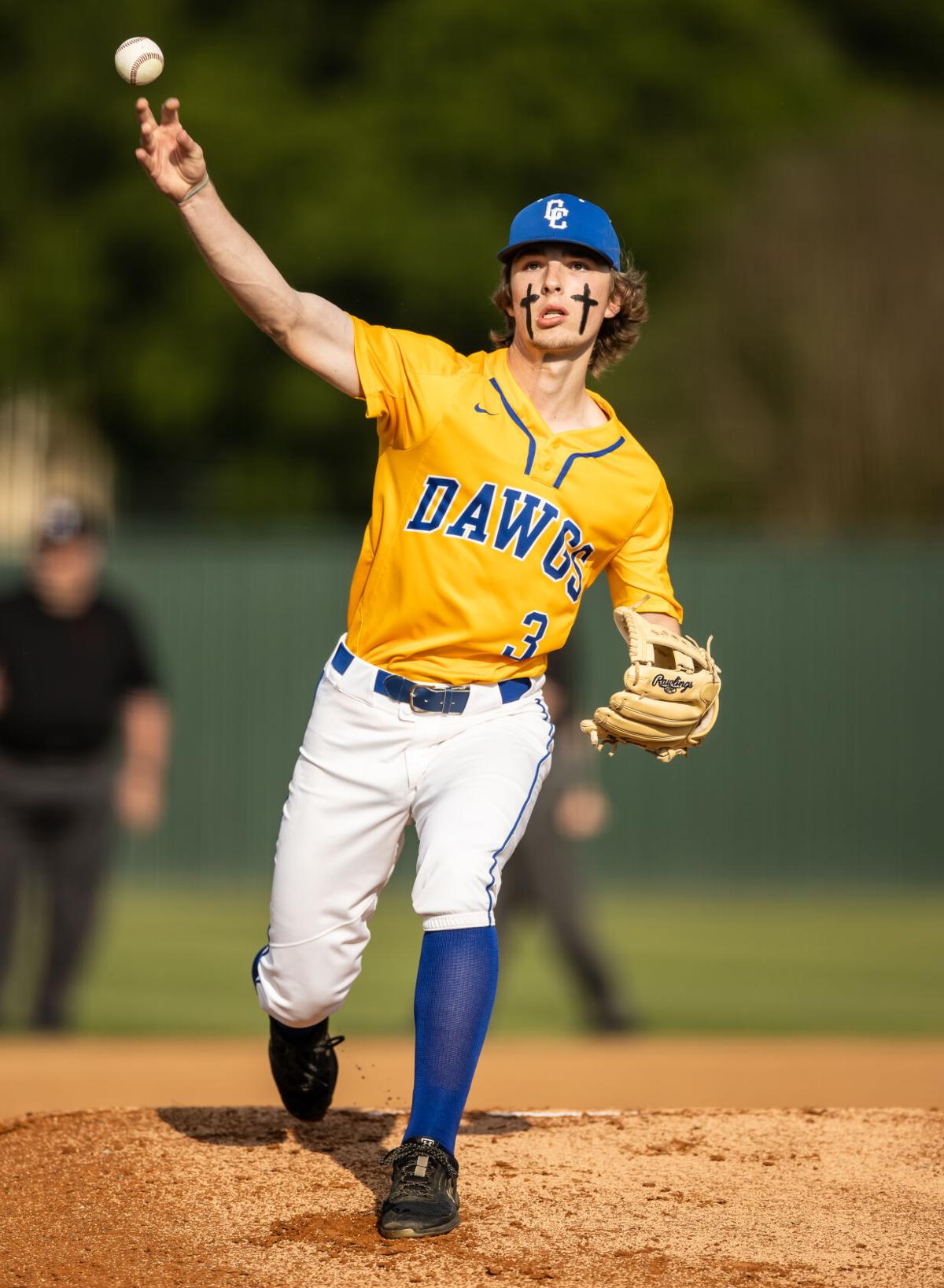 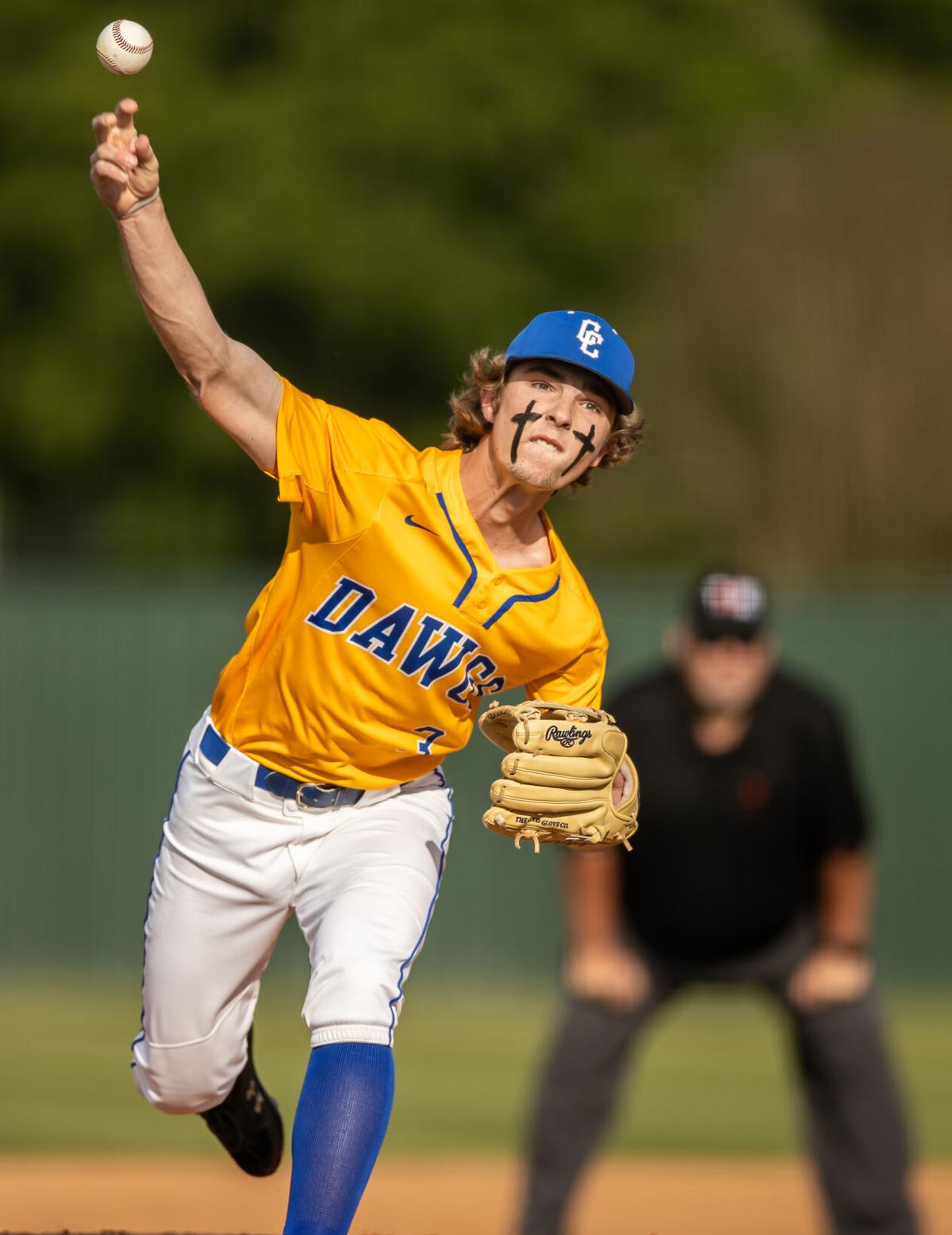 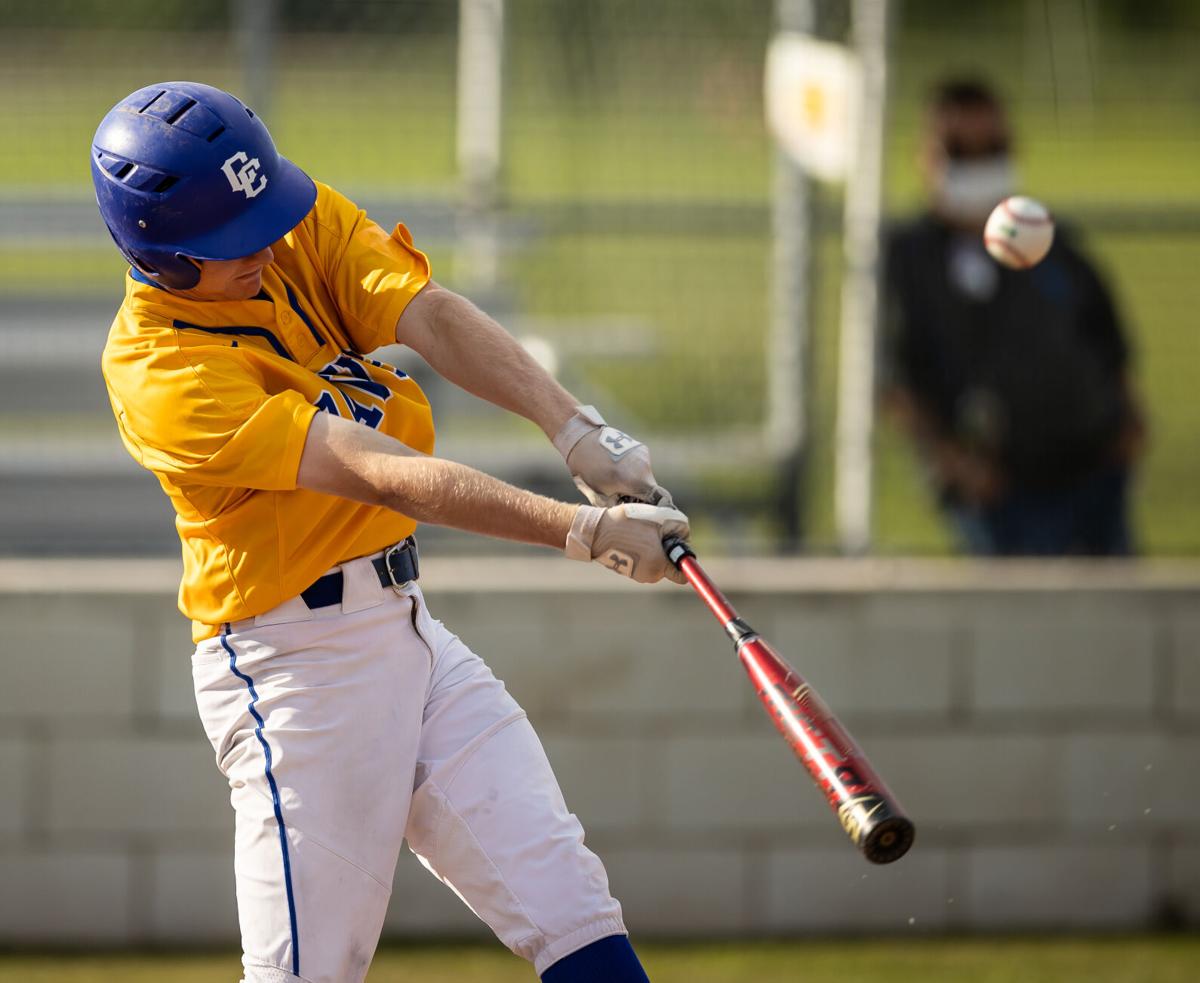 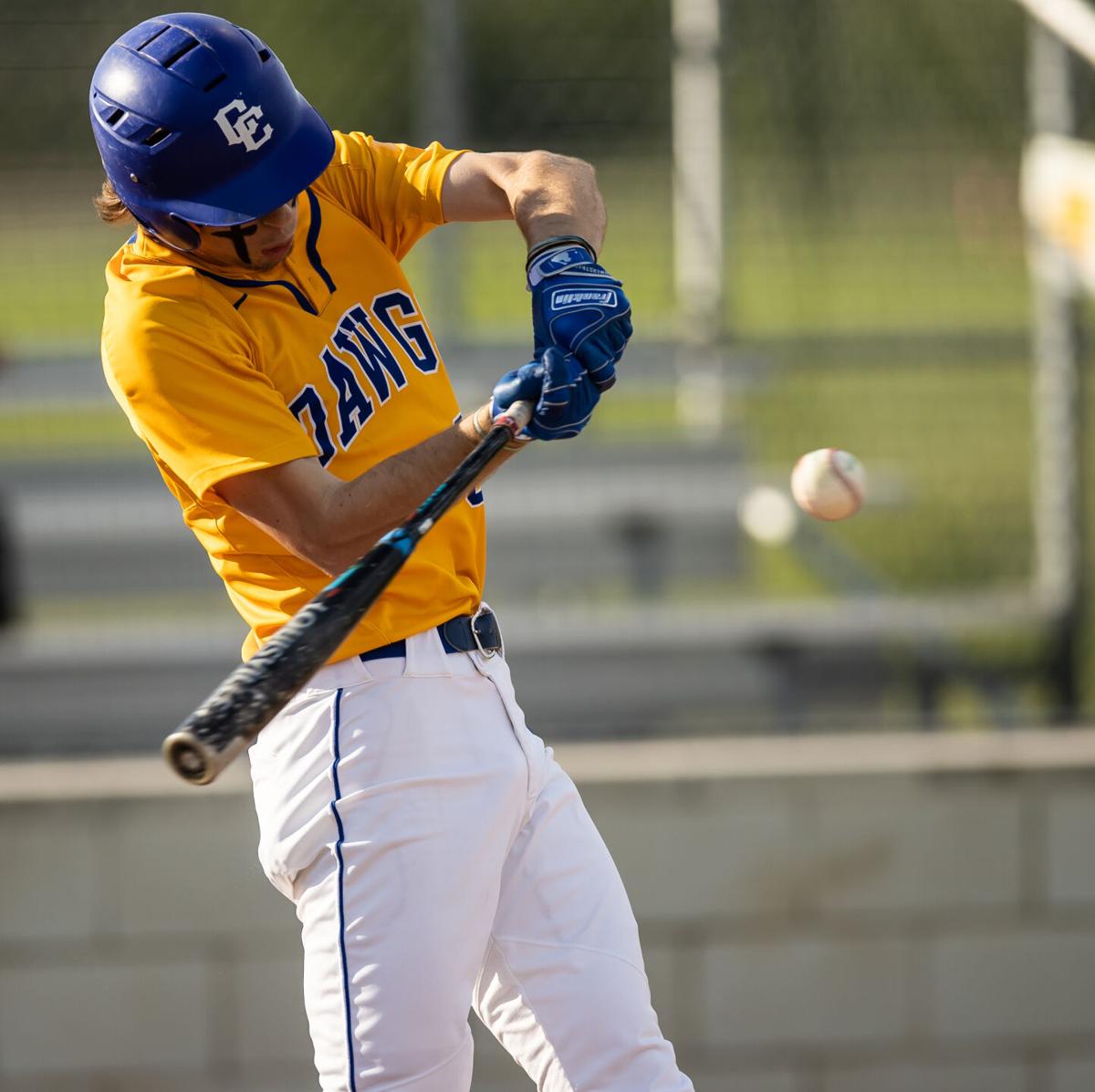 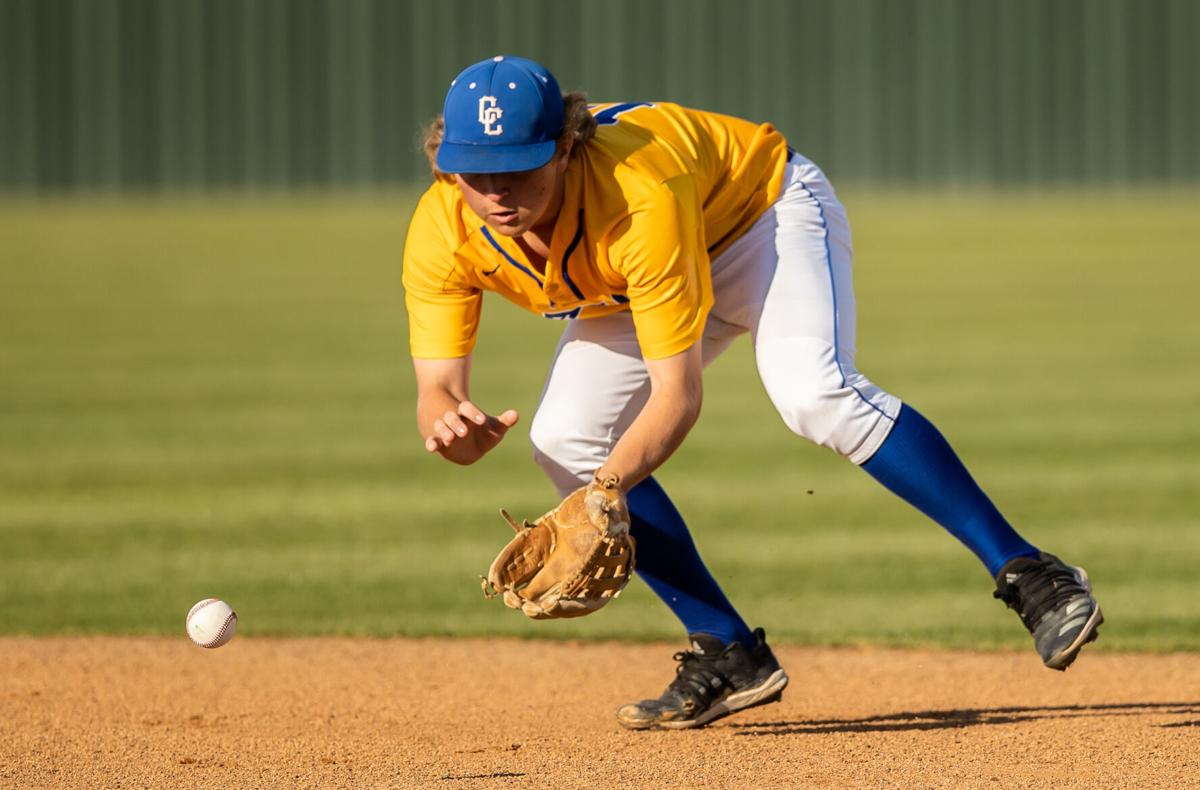 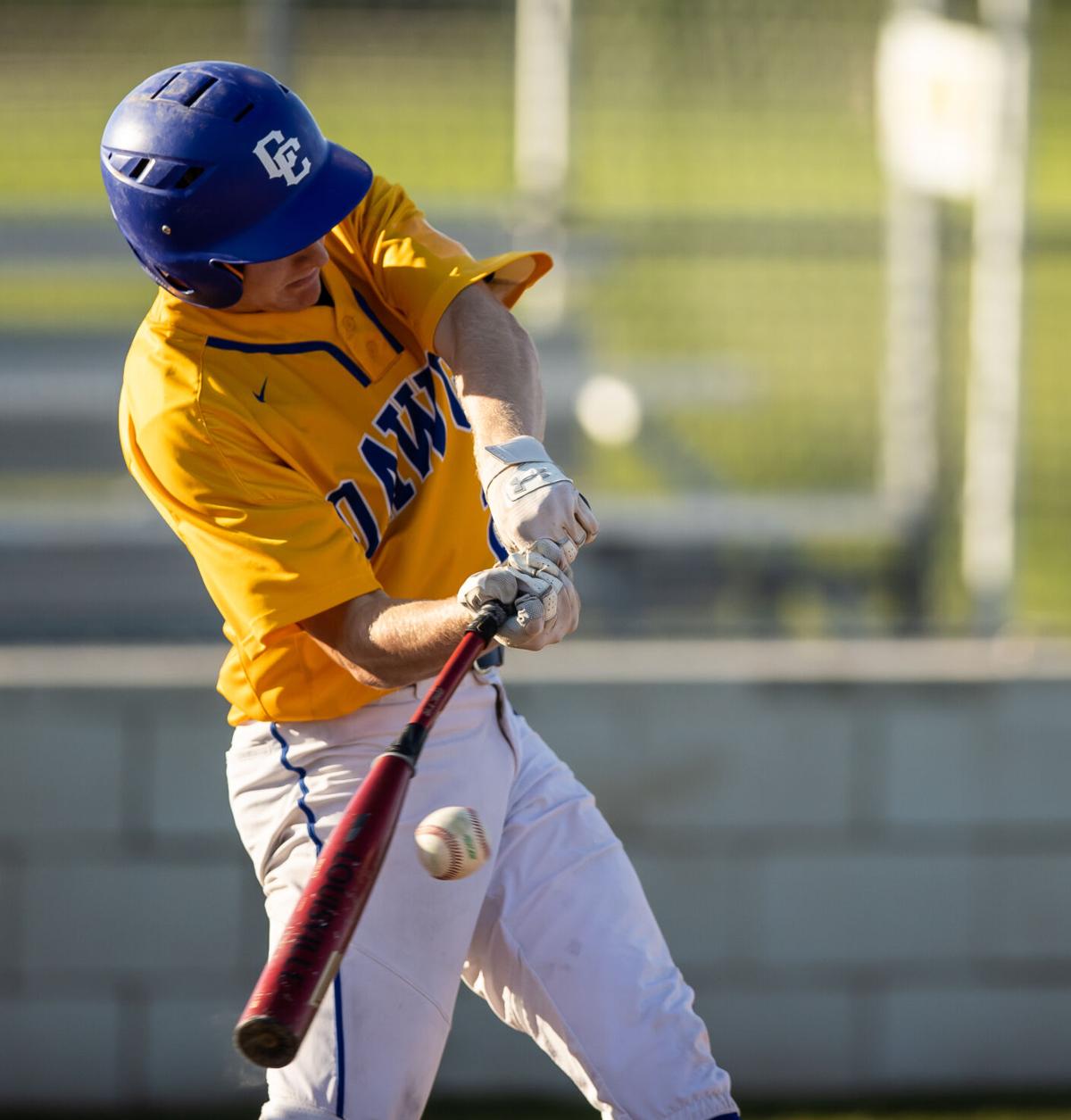 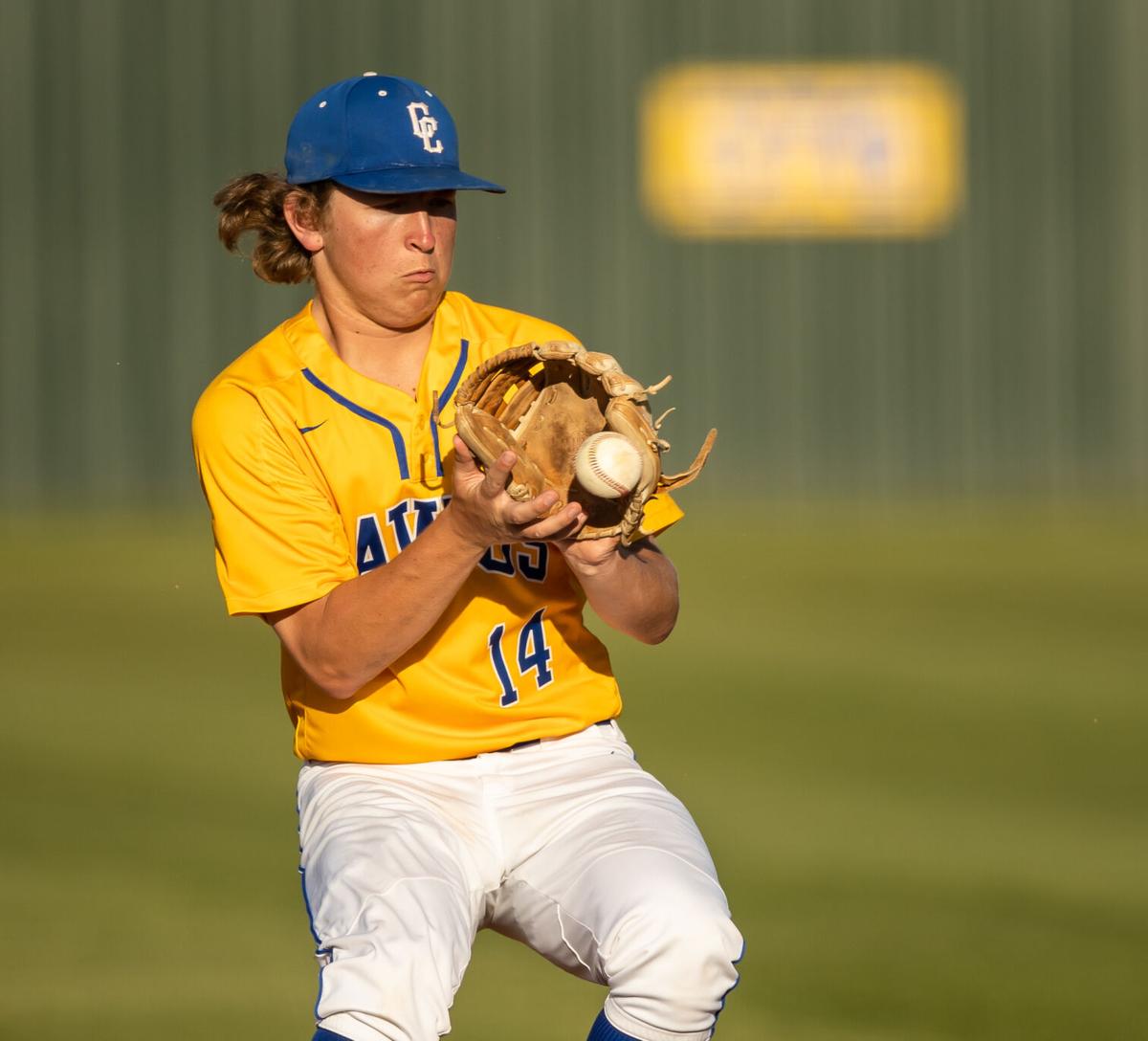 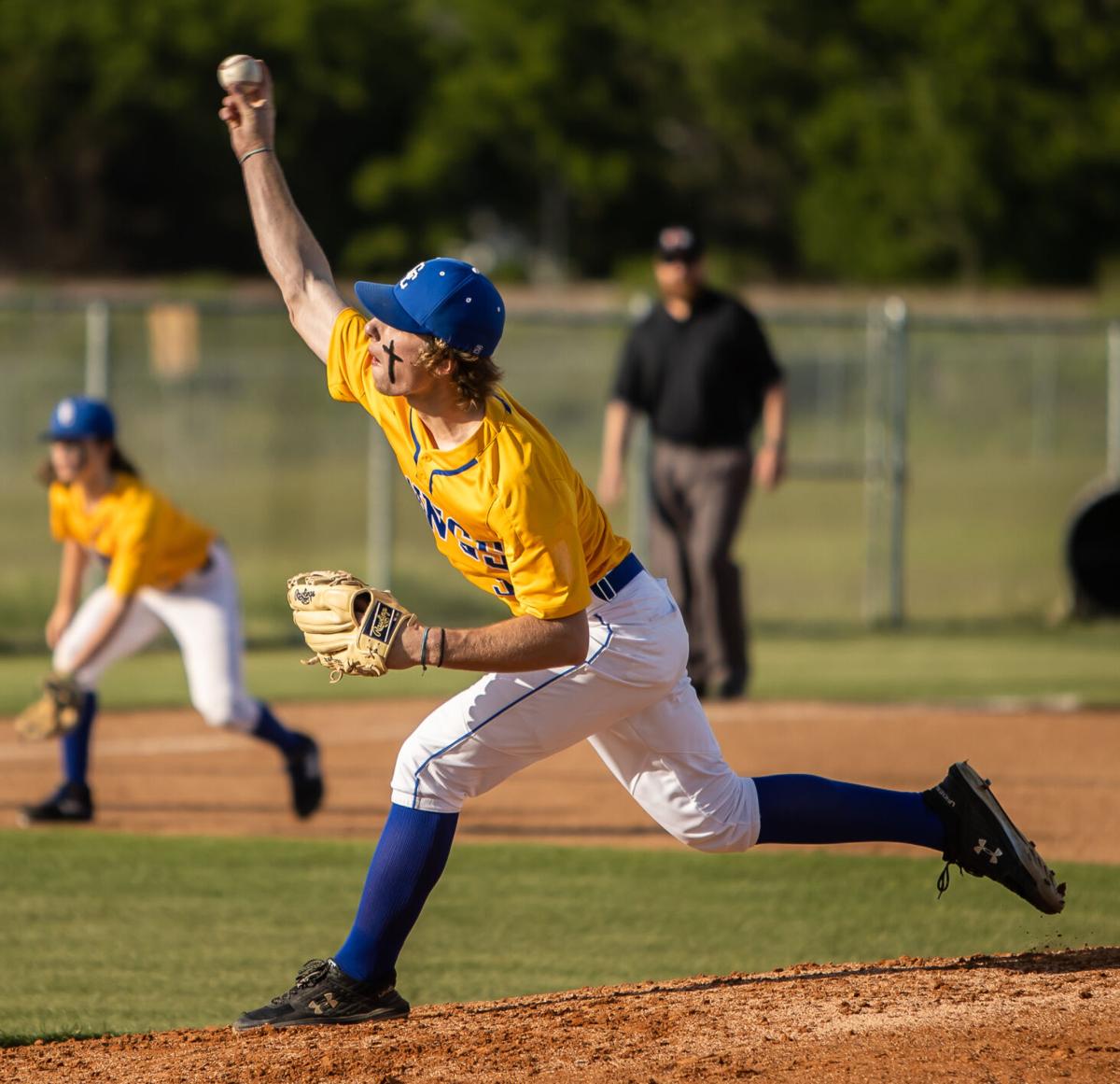 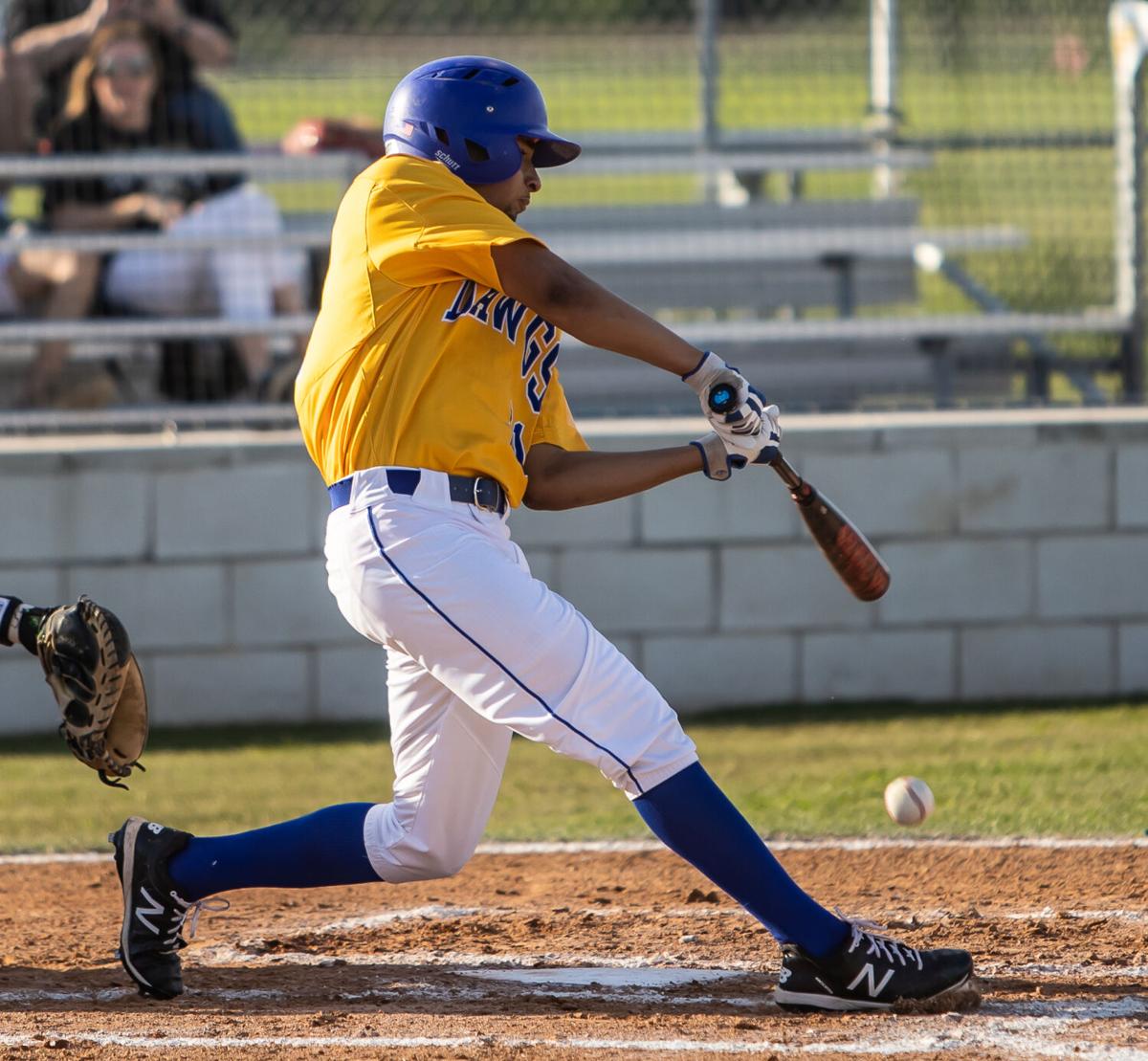 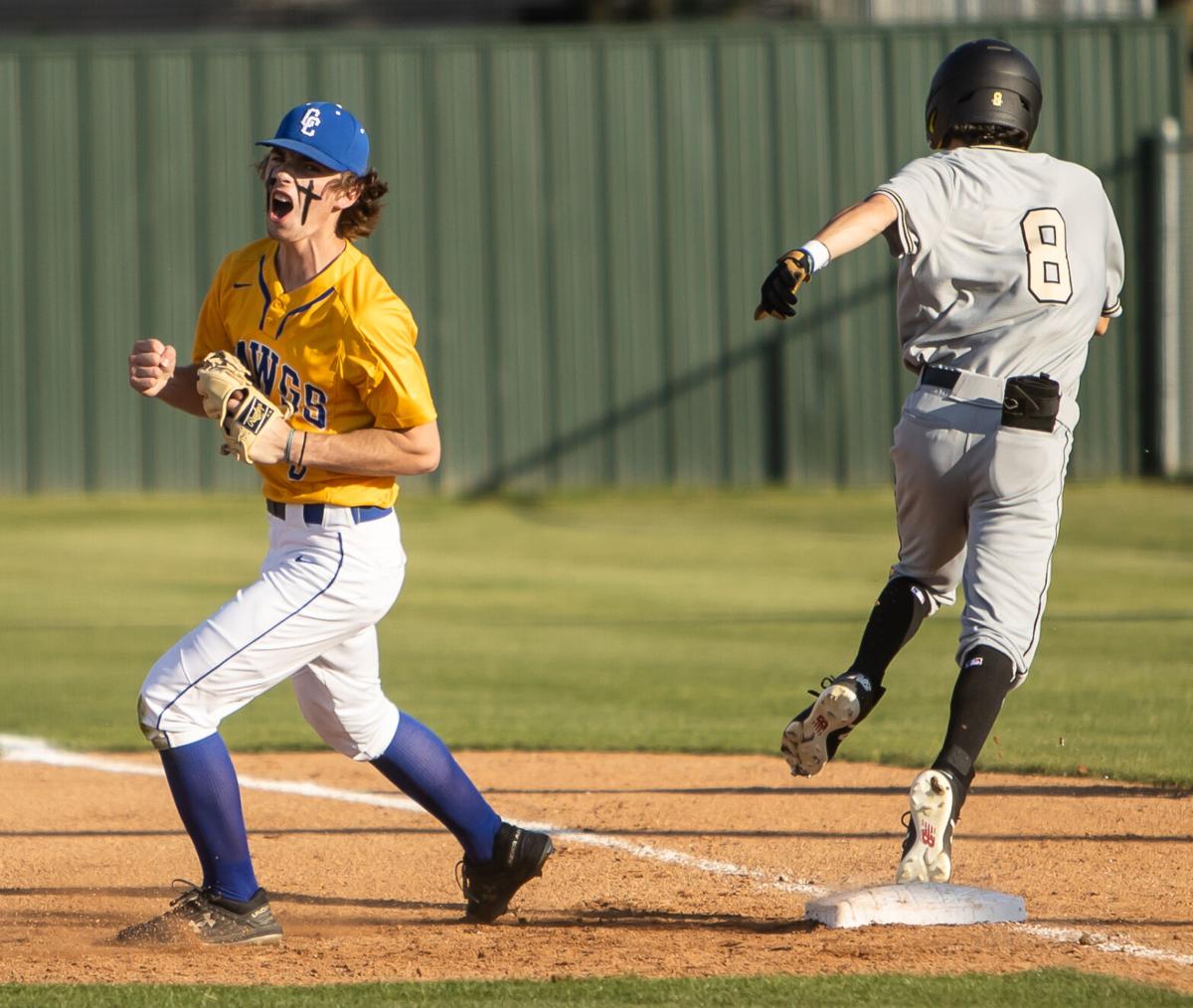 Copperas Cove pitcher Travis Sanders, left, reacts after covering first base and getting Mansfield's AJ Perez (8) out to end the inning in Game 1 of their bi-district playoff series Friday in Copperas Cove.

Copperas Cove’s Dekan Radigan (14) throws to first base after getting a forceout of Mansfield’s Reid Rios (7) at second base on Friday in Copperas Cove.

Copperas Cove golfer Elle Fox throws out the first pitch before the Bulldawgs' playoff series opener with Mansfield on Friday in Copperas Cove. Fox will be the first Cove girls golfer to compete in the state tournament on Monday.

Copperas Cove pitcher Travis Sanders, left, reacts after covering first base and getting Mansfield's AJ Perez (8) out to end the inning in Game 1 of their bi-district playoff series Friday in Copperas Cove.

COPPERAS COVE — Copperas Cove catcher Russel Cochran chucked the ball into center field in celebration prior to embracing pitcher Travis Sanders, who himself pumped his fist and yelled coming off the mound after the final strike clasped into Cochran’s mitt Friday night.

Sanders had just struck out Mansfield’s AJ Perez to seal his complete-game performance in the Bulldawgs’ 5-3 victory in the first game of the first-round playoff series with the Tigers.

“That’s huge for Copperas Cove baseball,” said head coach Bryant Lopez of the win. “... Seeing that ball hit his mitt, I haven’t been that excited in a very, very long time.”

Sanders spoke about his emotion after the final strikeout, his seventh of the game.

Copperas Cove was at or flirting with a .500 record most of the season before winning five of the final seven to finish with an 18-14 record.

As they did a week ago to secure the final playoff spot in District 12-6A, the Bulldawgs overcame an early deficit with timely walks and hits.

Trailing 3-2 in the fifth inning and facing a one-ball, two-strike count with the bases loaded and two outs, designated hitter Gabriel Chapman floated a single over second base that landed in shallow center field.

Chapman’s heroics sent the Bulldawg faithful into a fevered frenzy as John Garcia-Leon and Sanders came across to score the tying and, what proved to be, game-winning runs, respectively.

“Coaches talked to me right before that at-bat,” Chapman said. “The pitcher was struggling; he was going to attack me with fastballs.

“Early in the at-bat, I struggled. He came at me with a curveball (and) sliders, and I had to adjust on the go. I fouled a few off and then finally got my pitch and just poked it into shallow center.”

Lopez said Chapman was a mid-season junior varsity call-up for the Bulldawgs.

“Ever since then, he’s been coming through,” he said. “He had a base hit the other night against Temple and he ended up scoring on that, and then tonight, I mean, that was a great at-bat. He had two strikes, he was fouling stuff off.”

Lopez added that Chapman and the other young players on the team have allowed themselves to be coachable, which has allowed them to scrap and claw for victories throughout the season.

After Chapman’s single, Caden Harris was hit by a pitch, loading the bases yet again.

Cochran scored the insurance run when Mansfield pitcher Zane Reynolds threw a wild pitch that skipped and bounced high off the backstop net.

The inning prior, the Bulldawgs had a good chance to tie the game.

Down 3-0 with the bases loaded and one out in the fourth, Harris drove in a pair with a hit similar to Chapman’s.

Sanders and Cochran came around to score as the Bulldawgs chipped into the deficit.

With runners on first and second, Tiger pitcher Aidan Esquivel got Antonio Espinoza to pop out in foul territory to the catcher and got Dekan Radigan to roll over on a grounder to second base.

The Tigers had drawn first blood in the first inning and rode the strength of five singles in the fourth to increase the lead to 3-0.

Sanders also had to fight through an adversity-filled third inning when he walked the first two batters and at one point missed the strike zone on seven straight pitches.

“I wasn’t on; I mean, I was hitting around the zone but nothing there like I was in the first two innings, three innings, whatever it was,” Sanders said. “It kind of fired me up.”

He said once he threw a strike, it fired him up. Though that batter was one of the ones who walked, Sanders struck out the next two and then got Perez to ground out to first base.

Sanders finished with seven innings pitched, seven strikeouts and three walks. He gave up seven hits and three runs, two of which were earned.

Chapman went 1-for-2 with the single and two RBIs. Chapman also reached on an error.

Jace Johnson finished 0-for-2 with a walk and a sacrifice bunt that put Garcia-Leon in scoring position in the fifth inning.

Harris led the Bulldawgs in hits, going 2-for-2 with two singles, two RBIs and a hit-by-pitch.

Espinoza went 0-for-2 with a walk.

Garcia-Leon went 0-for-2 with a hit-by-pitch, a stolen base and a run scored.

Mansfield’s linescore was three runs, seven hits and one error.

The Bulldawgs (19-14) travel to Mansfield today for a 1 p.m. first pitch in the second game of the best-of-three series.

HARKER HEIGHTS — The Knights needed to rally. Now, they have to.