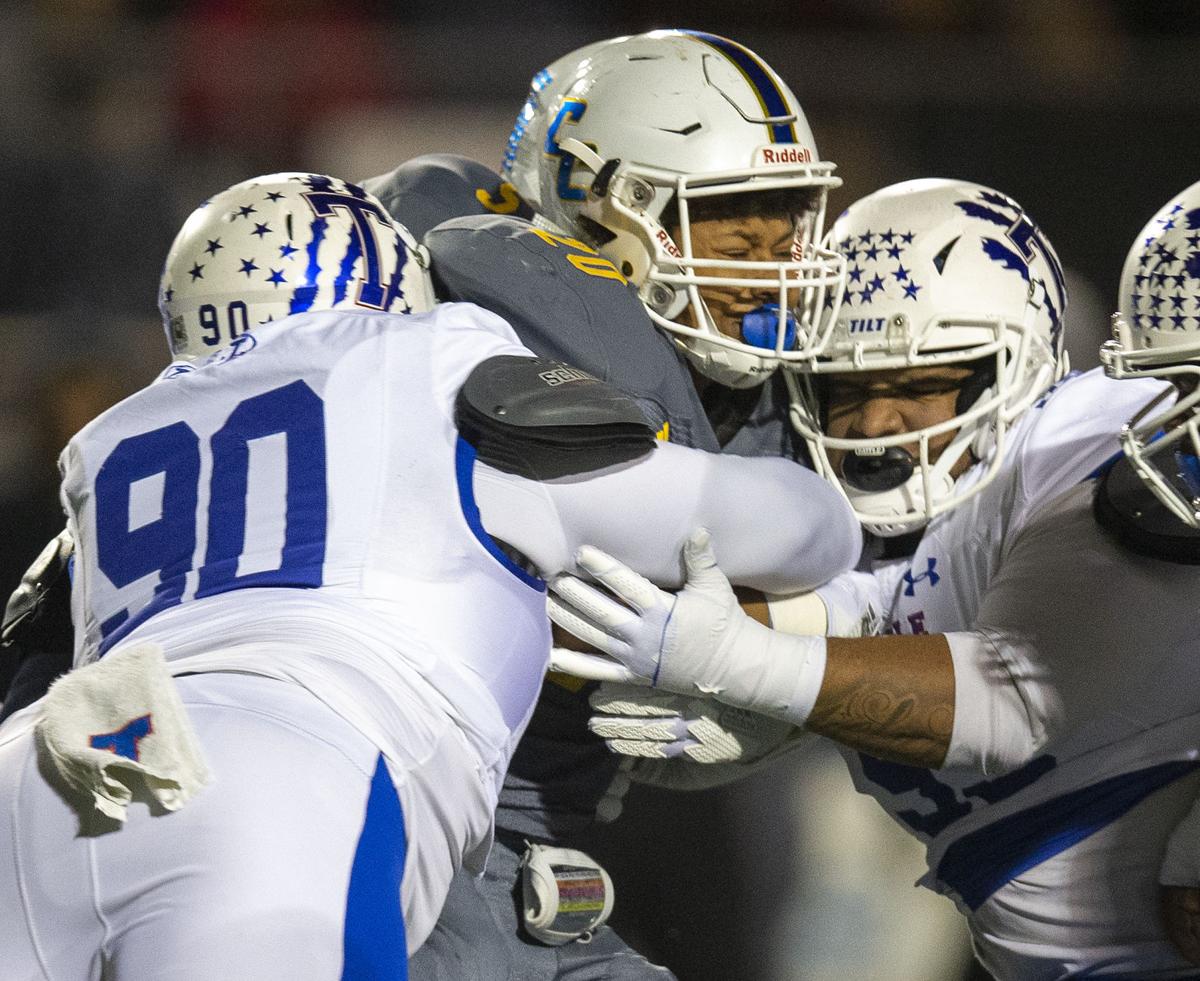 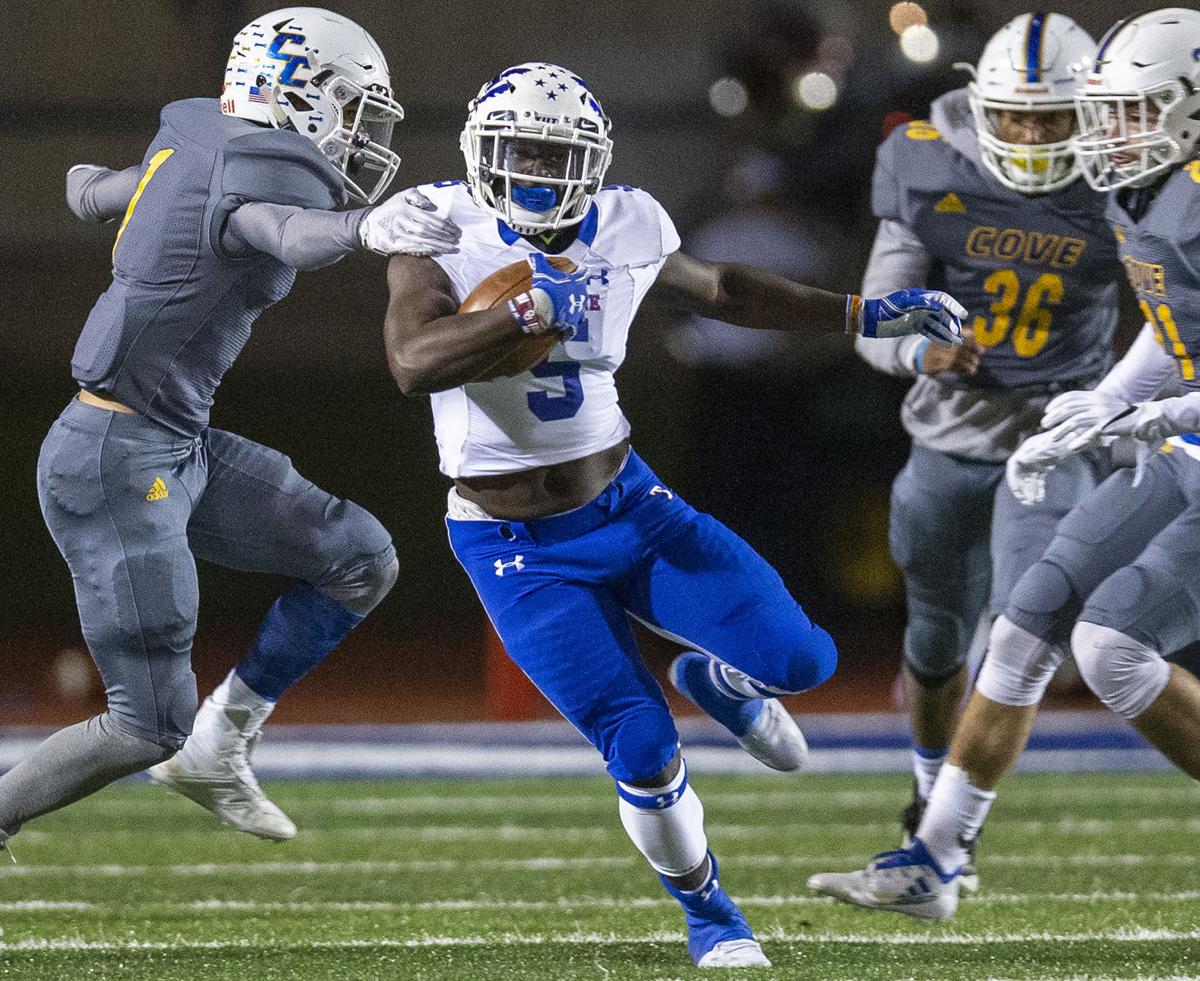 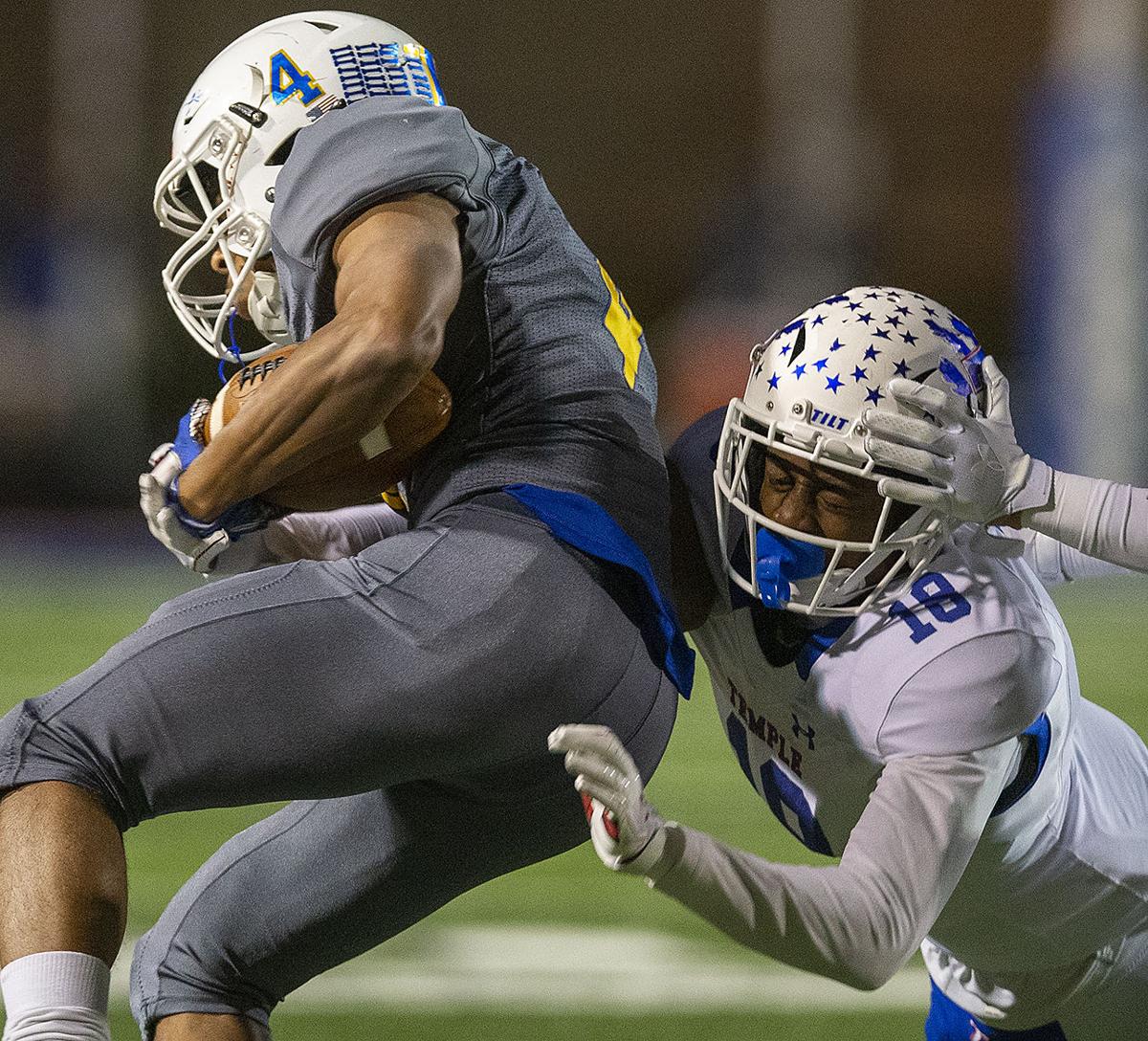 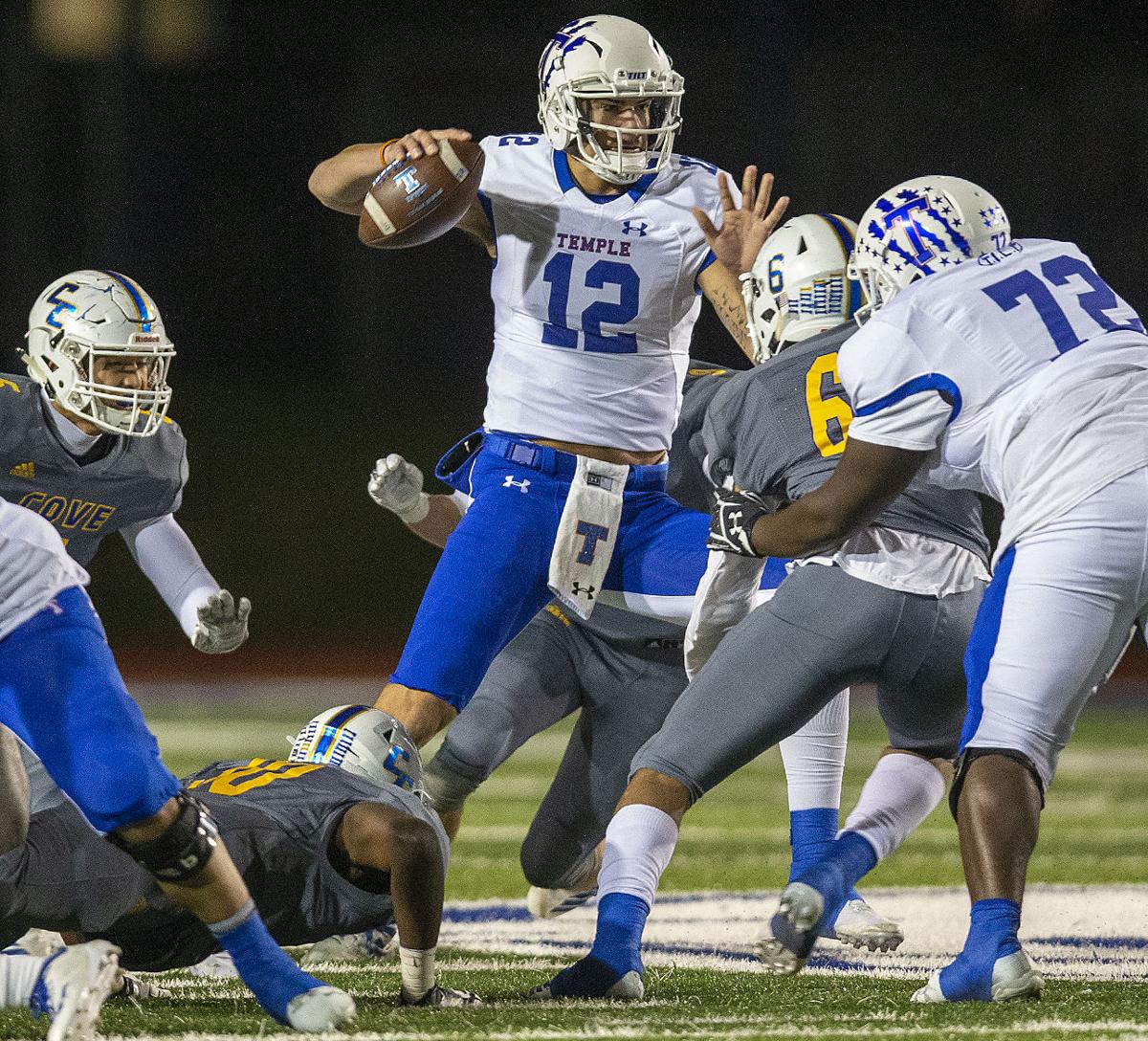 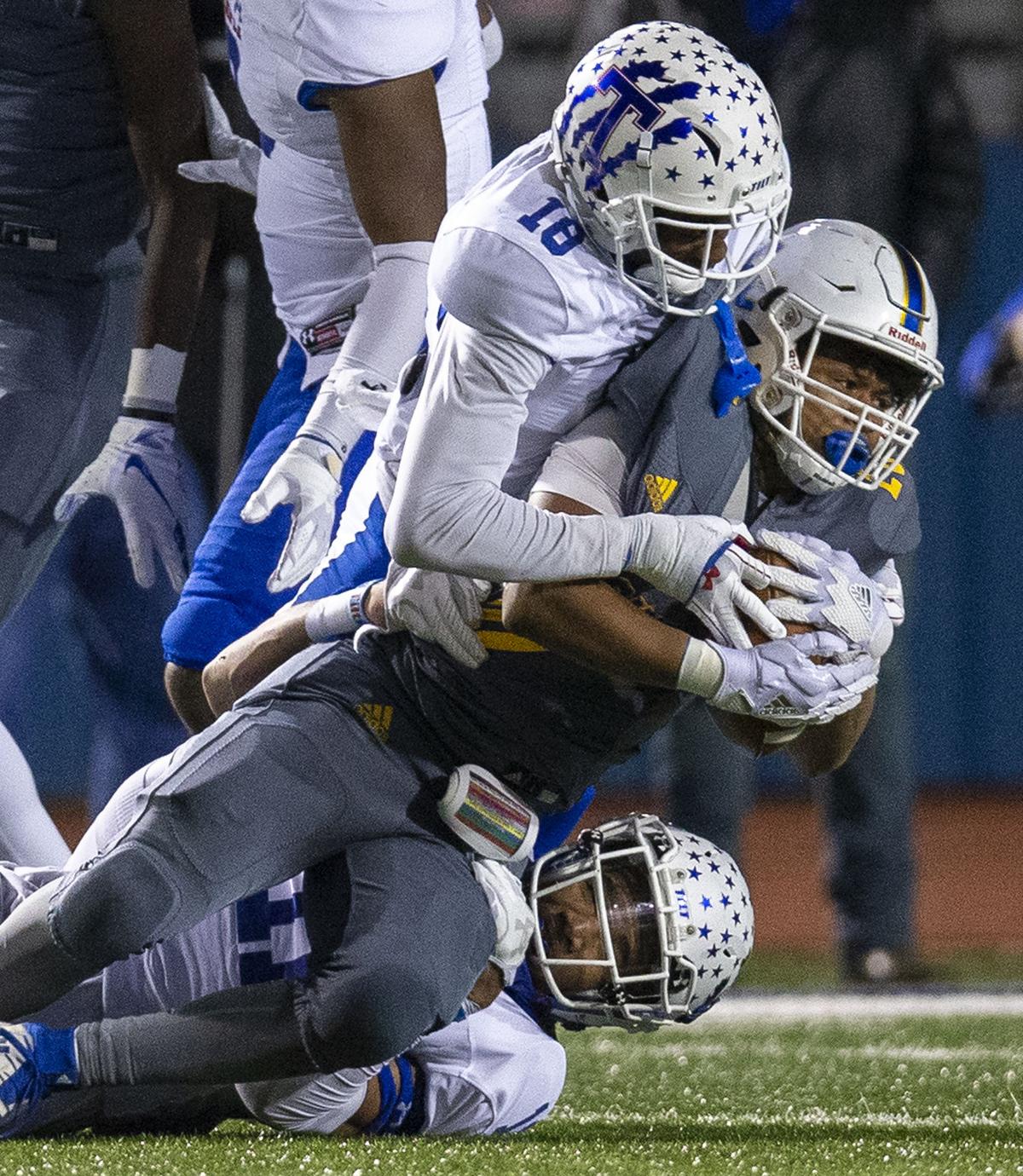 Lose, and host a bi-district playoff game against a 3-7 team — Mesquite Horn, it turns out.

Those scenarios sound simple, but the week leading into Temple’s regular-season finale Friday night at Copperas Cove was anything but for Wildcats third-year head coach Scott Stewart, who called it “one of the hardest weeks of my professional career.”

With numerous strategic options, Stewart insisted his starters would start, everyone on the field would play to win, and that staying as healthy as possible was a top priority.

In a game Copperas Cove had to win to reach the D-II playoffs, Temple led 12-0 at halftime and 18-7 into the fourth quarter at chilly Bulldawg Stadium. After Stewart watched star junior receiver Quentin Johnston and starting cornerbacks Markel Reed and Roman Jackson leave with knee injuries, he decided that health needed to become the Wildcats’ primary focus.

“We came out here to execute. I do care what people think about me, but I have to make decisions for this team and I’m going to stand by those decisions,” Stewart said. “Our objectives were to eliminate mistakes and to stay healthy. After our second kid thought he was going to get put on crutches, I wasn’t interested in seeing more of that. If we lose many more guys, it doesn’t matter who we match up with. It was diminishing returns.

“We did not throw this game. Their 1s were better than our 2s (during the final quarter-plus). Hat’s off to Cove. They executed their plan and got after it.”

“He wanted our starters go out and have fun, try to put points on the scoreboard and let our 2s get some burn,” Colbert said. “I like having another shot to play at home again.”

The Bulldawgs (7-3, 5-3) of first-year coach Jack Alvarez did what they had to do to gain playoff entry. After Simmons rushed for 181 yards, Simpson passed for 188 and Cove limited Temple’s offense to 175 yards, the Bulldawgs’ reward is a trek to 10-0 perennial power Longview.

“I’m really proud of our kids. They’ve worked really hard to be in this position,” said Alvarez, whose team went 5-1 in its last six district games. “I get (Temple’s situation). We took advantage of what we needed to to win.”

The Wildcats got Aaron Wagaman’s 27-yard first-quarter field goal, Colbert’s bull-rush safety and Anthony Jackson’s 5-yard touchdown run 2 minutes before halftime for a 12-0 advantage. Willis answered Cox’s 1-run TD run with a 5-yard scoring rush with 4 minutes left in the third for an 18-7 lead, but Temple’s defensive reserves couldn’t contain Simmons and Cox in the fourth.

Simmons had a 27-yard scoring burst and ensuing 2-point run to pull Cove within 18-15, then Cox pushed the Bulldawgs ahead on his 10-yard TD rush with 3:31 remaining.

WACO — Needing a win over Waco High and a Temple win over Copperas Cove to make the playoffs, Killeen turned to the duo of Blaze Albino and De…