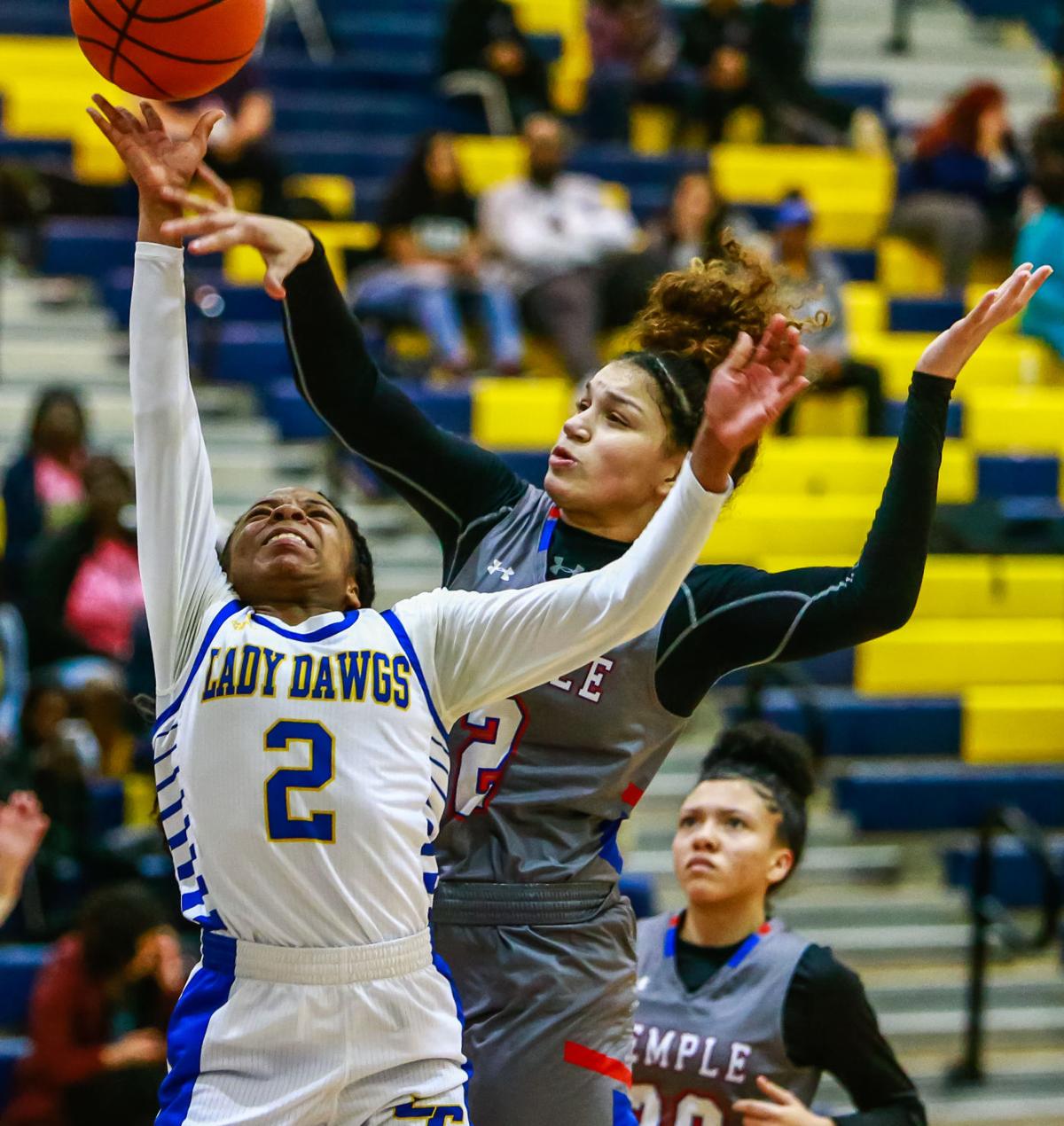 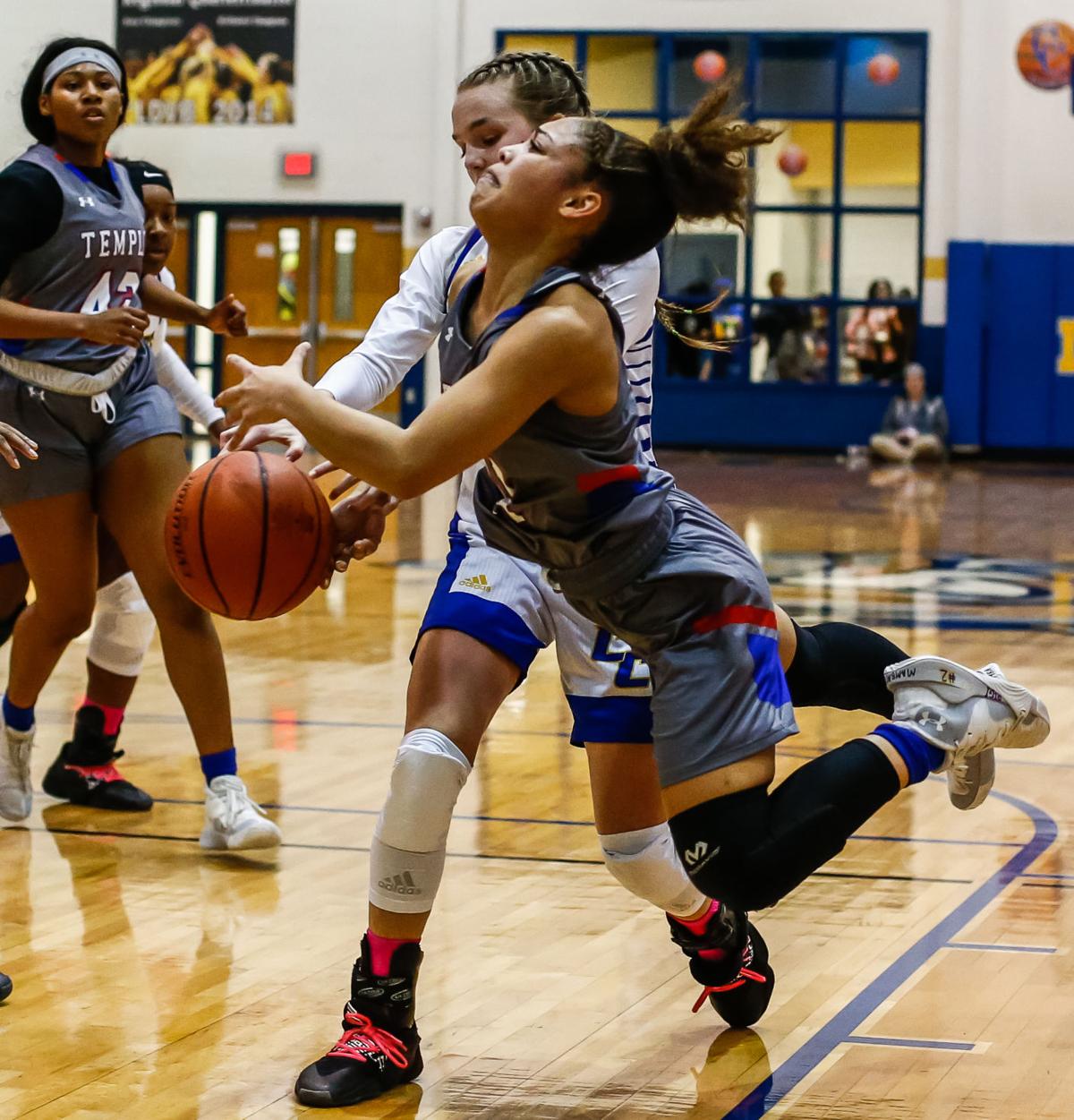 Temple's Taliyah Johnson, front, goes down after being fouled by Copperas Cove's Madisen Honea on Tuesday at Copperas Cove. 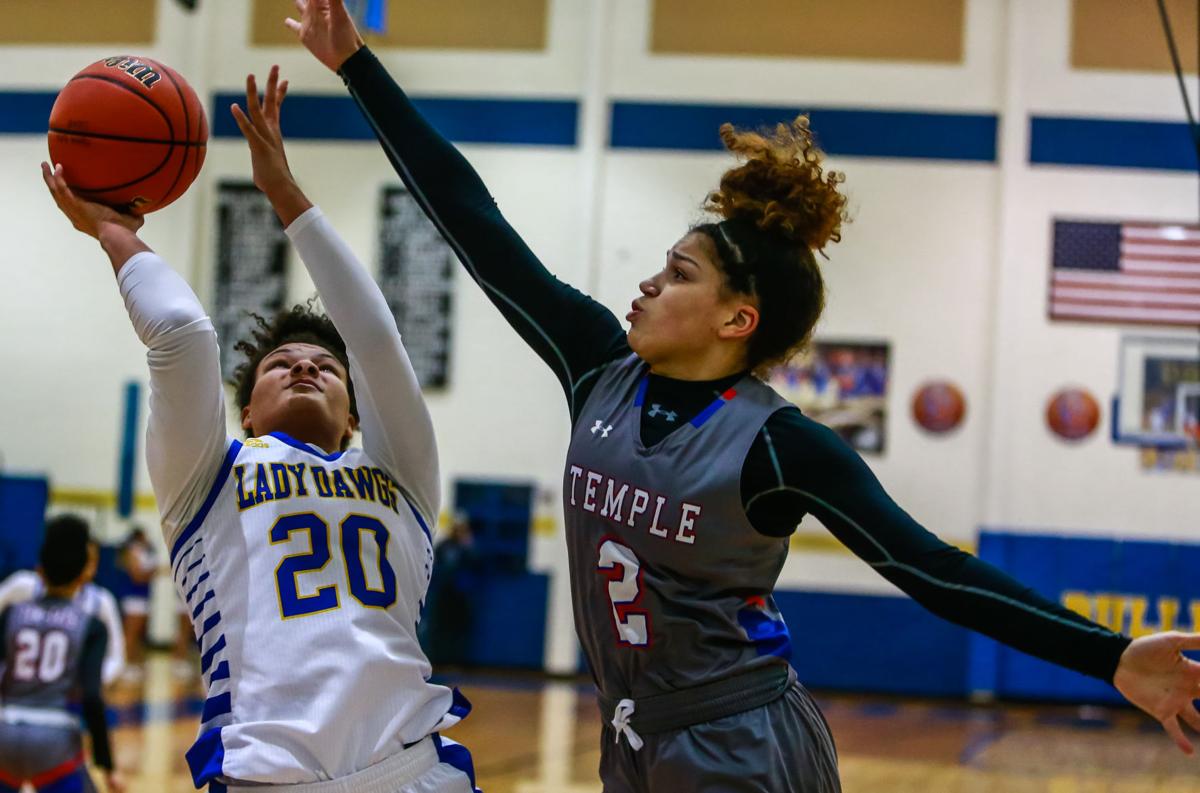 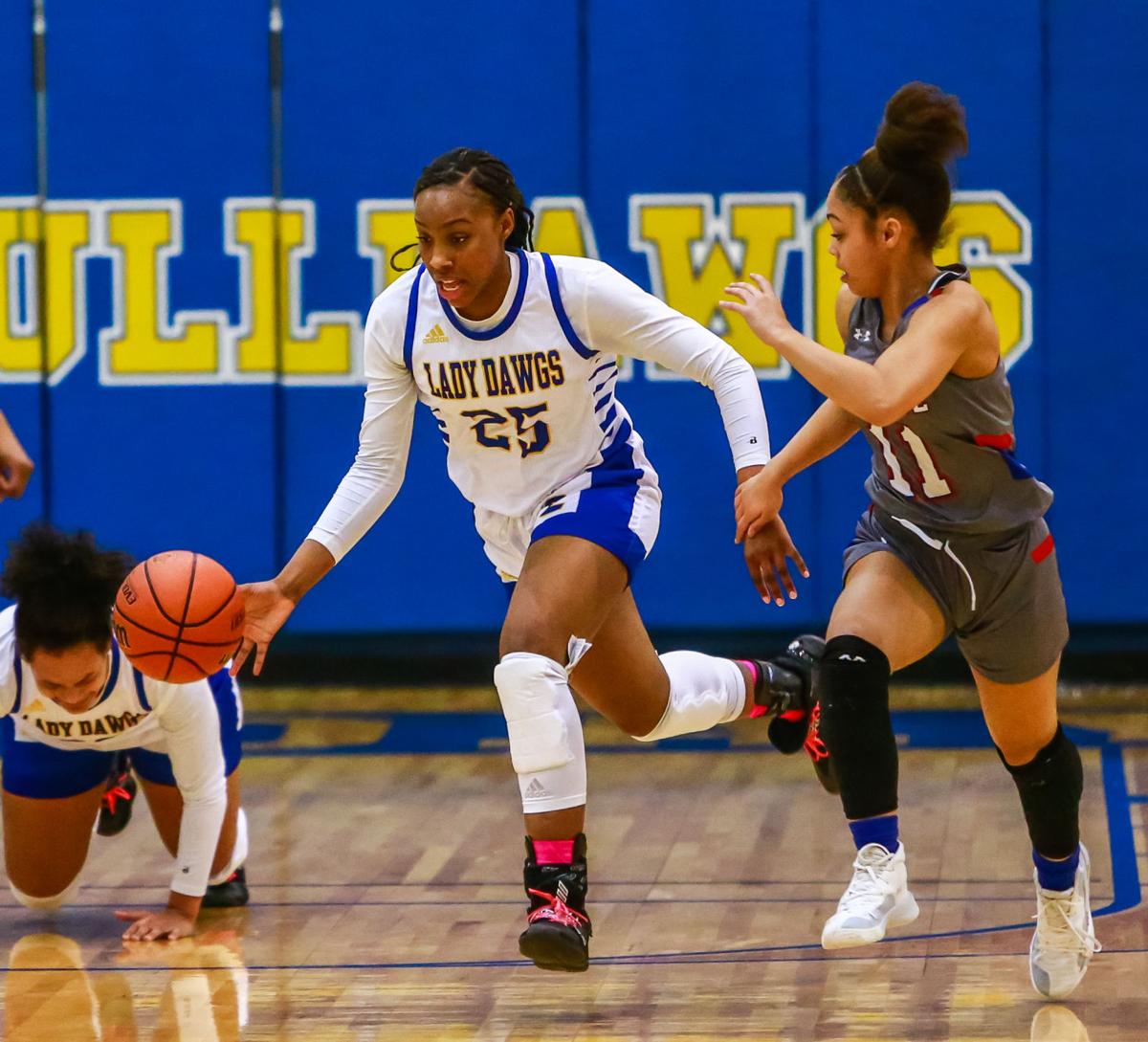 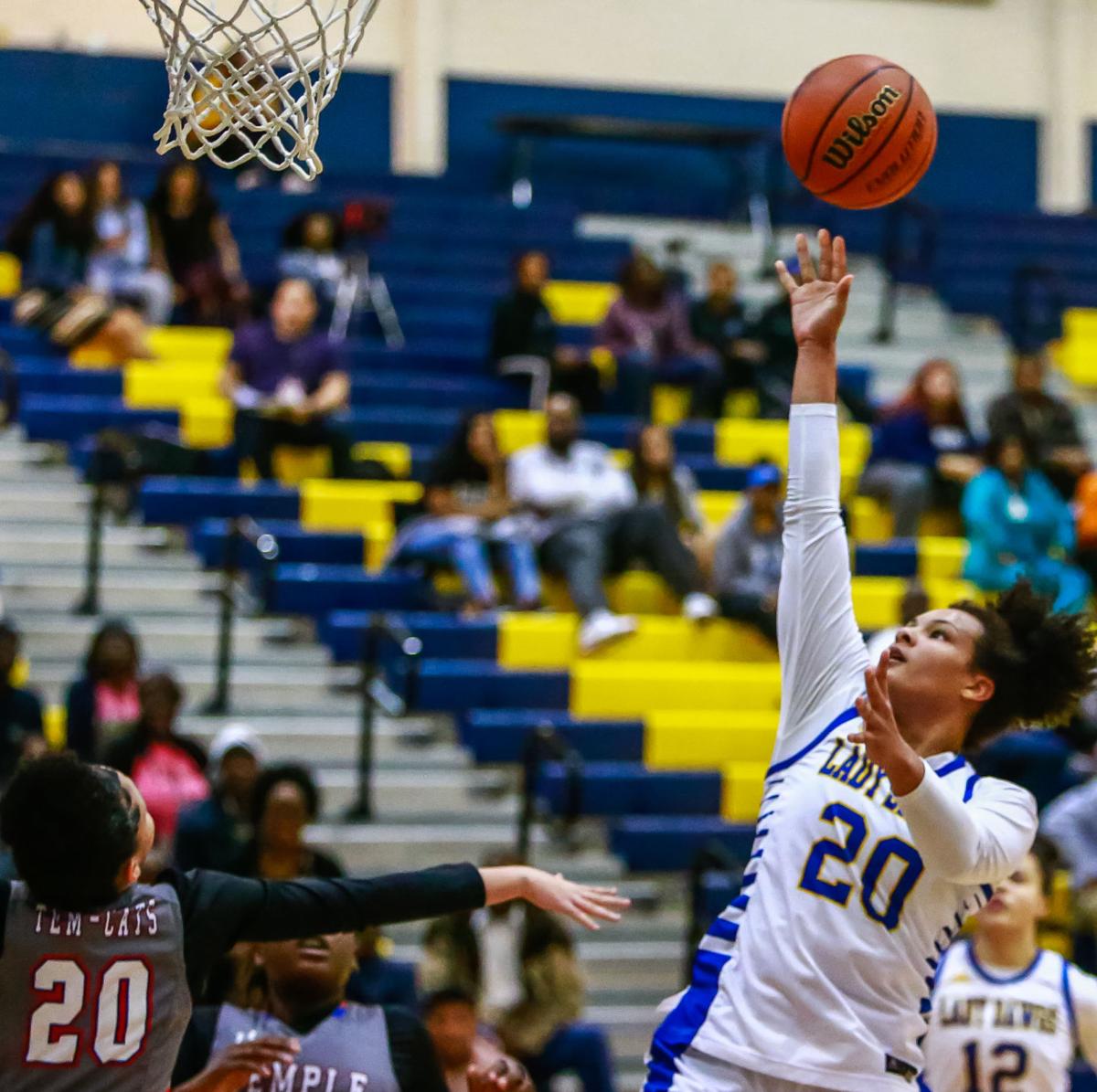 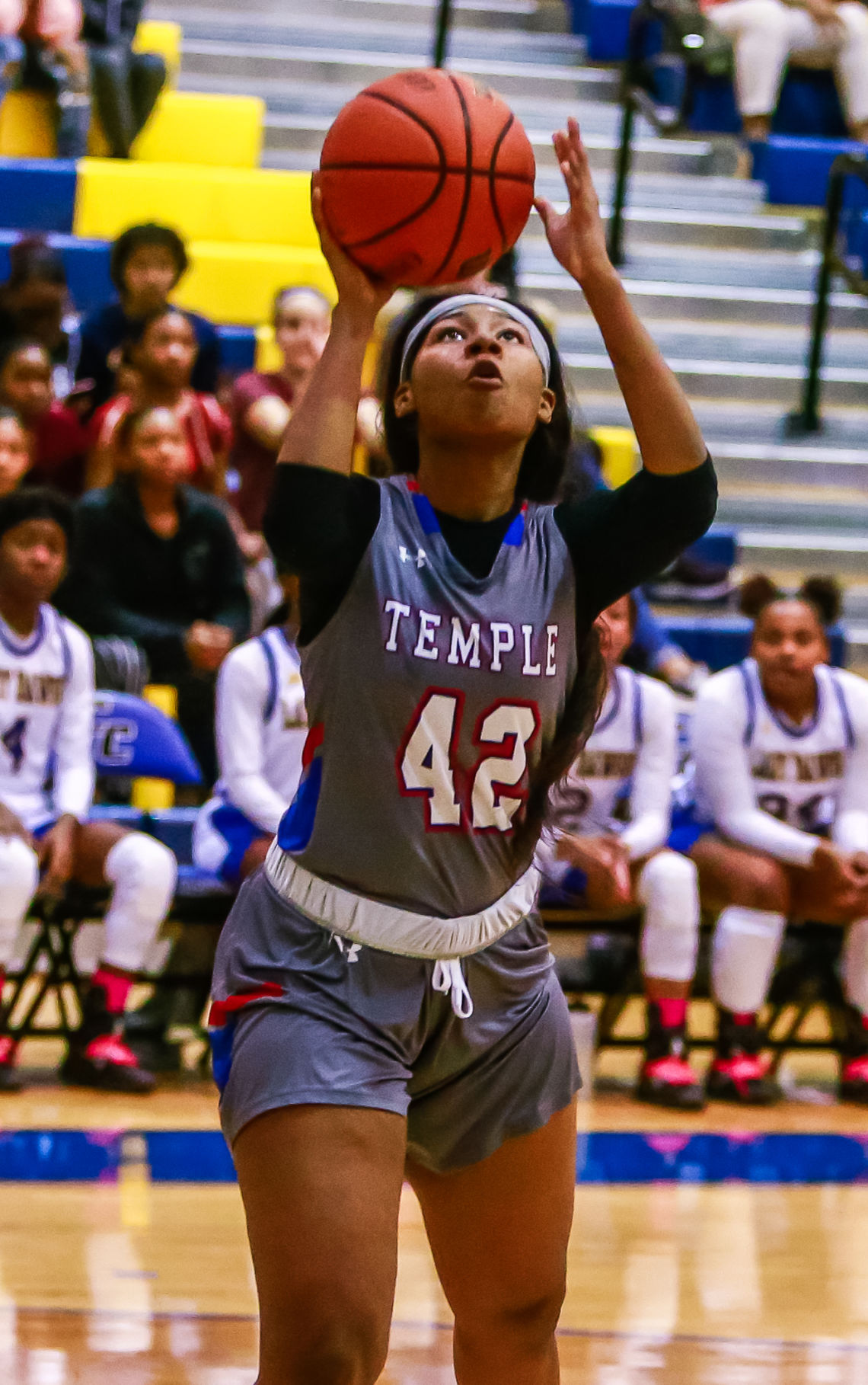 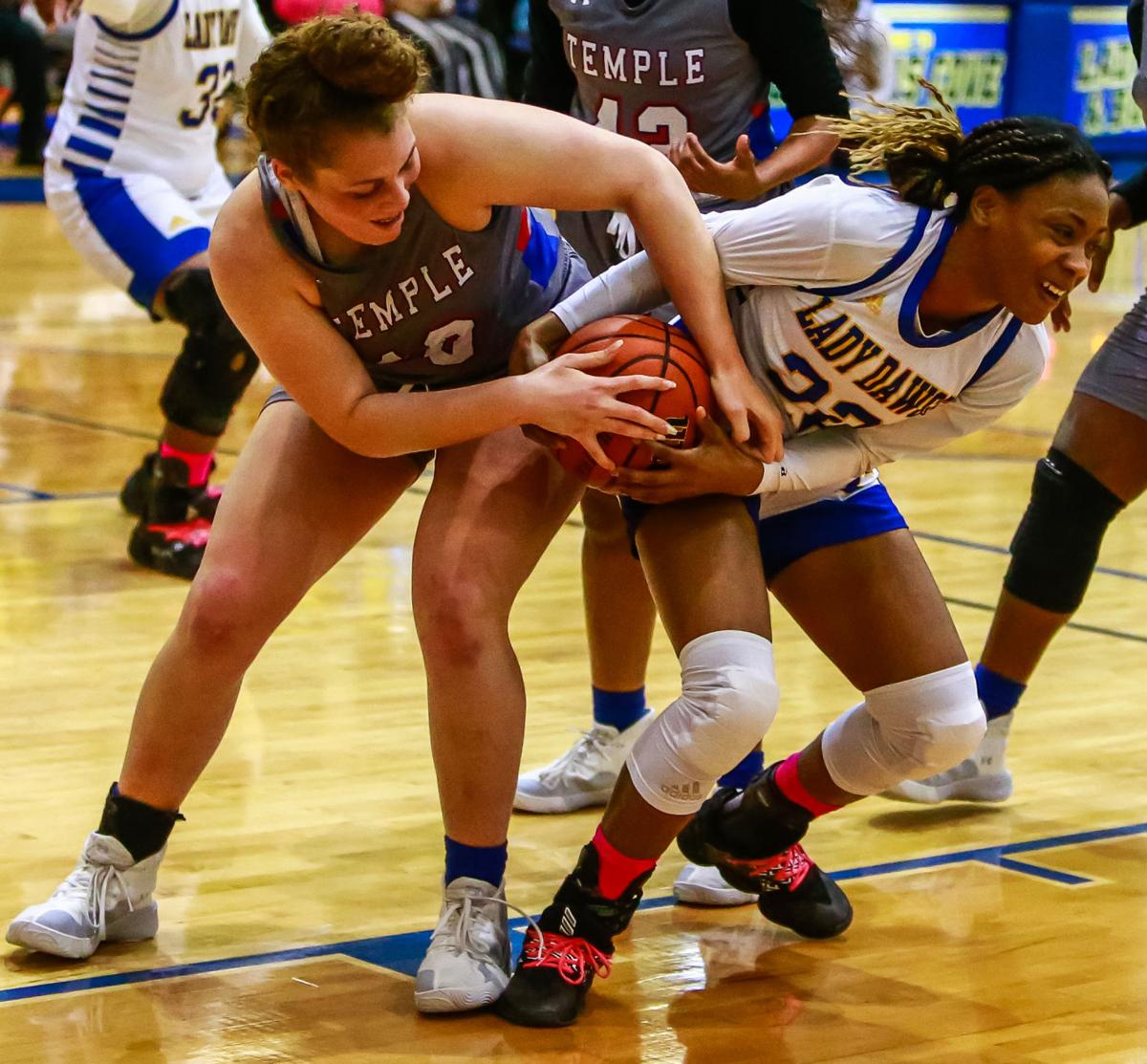 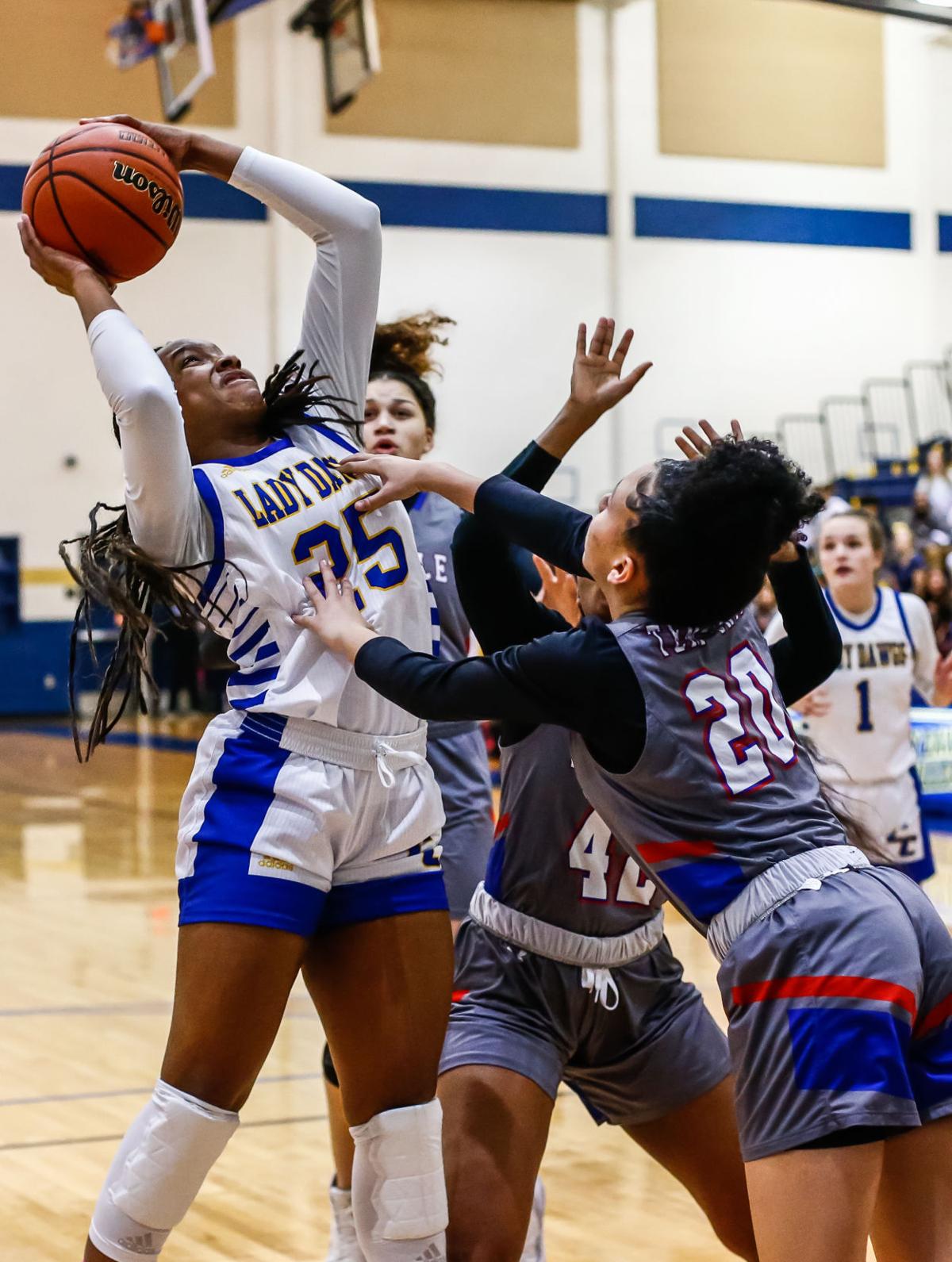 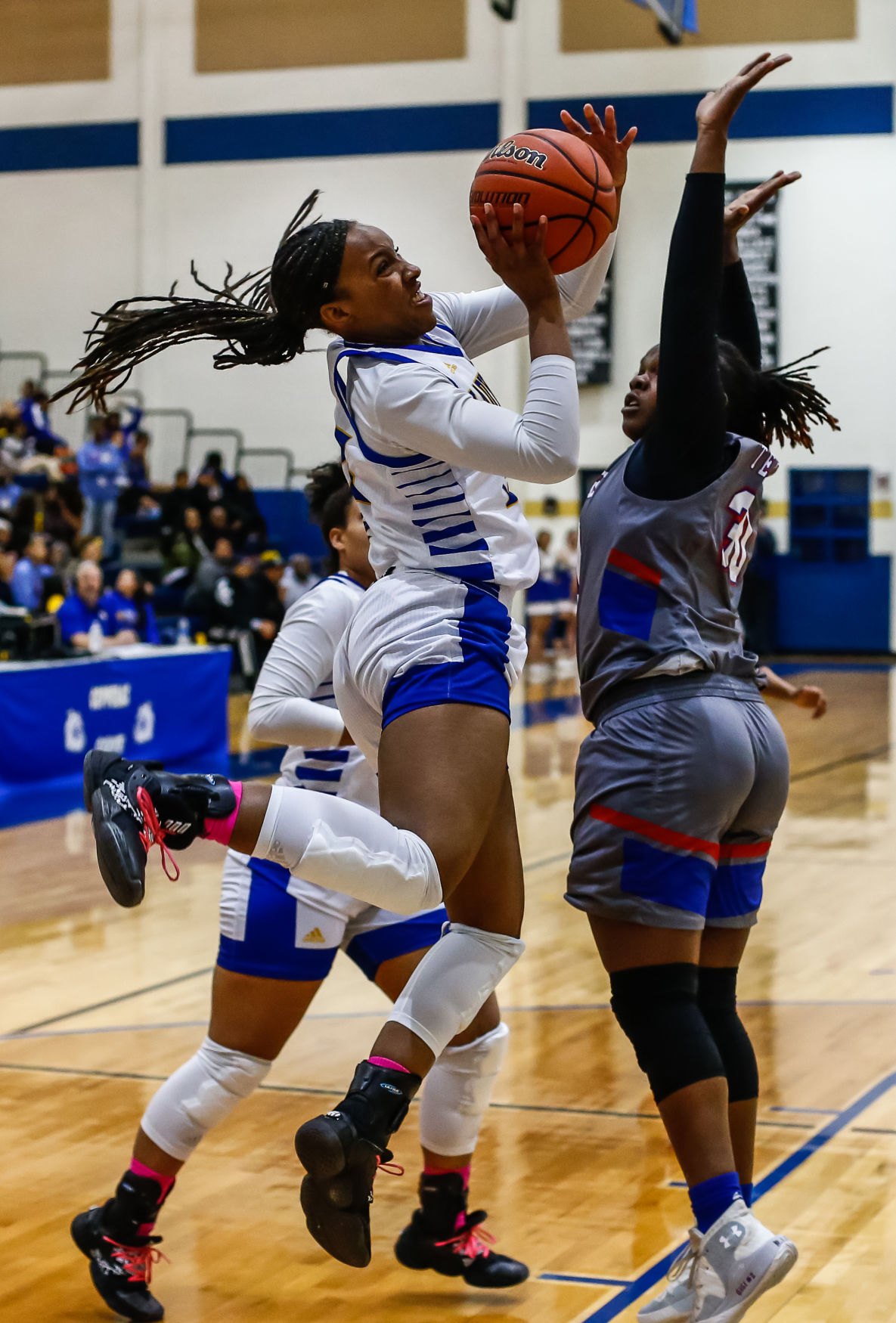 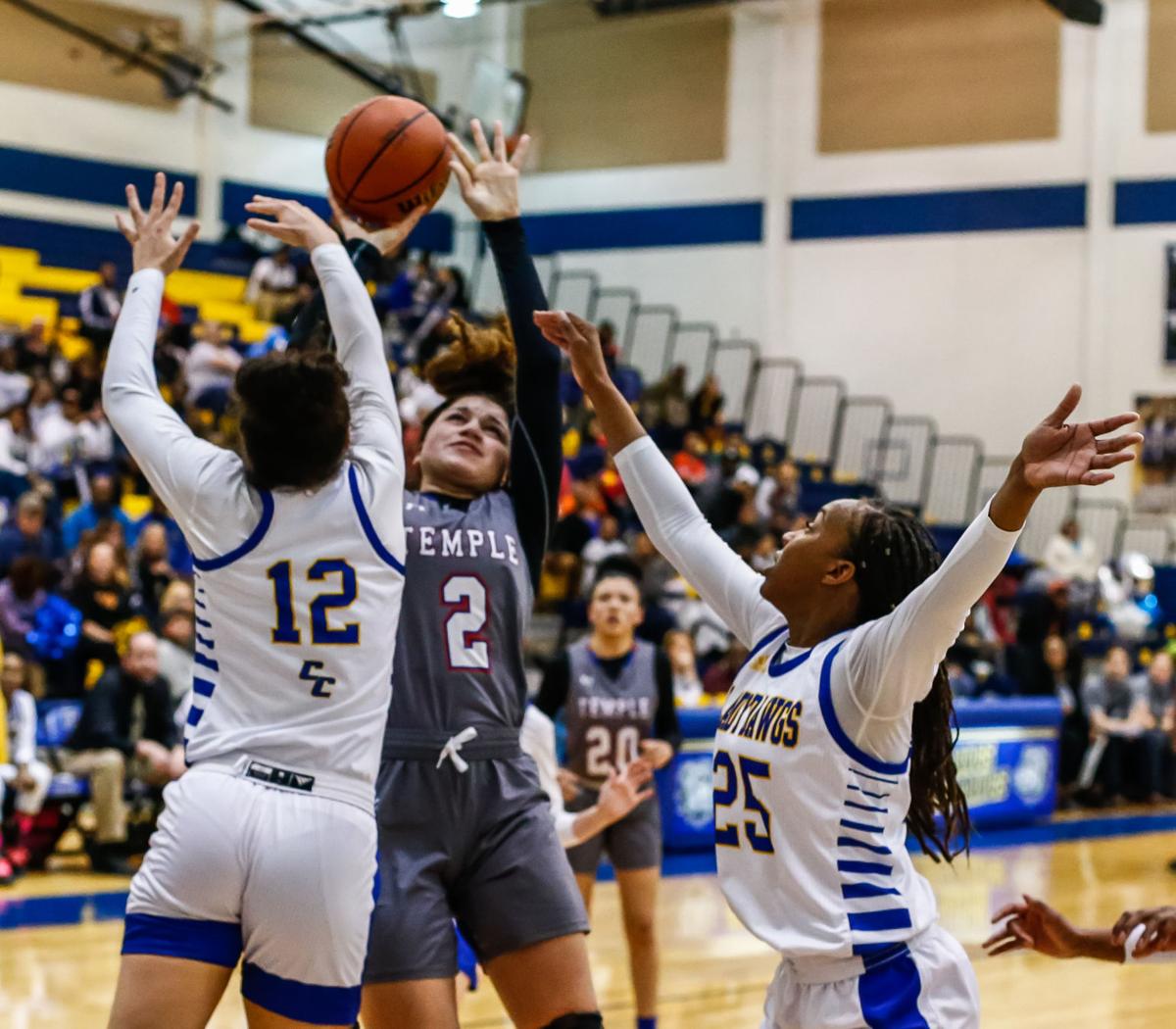 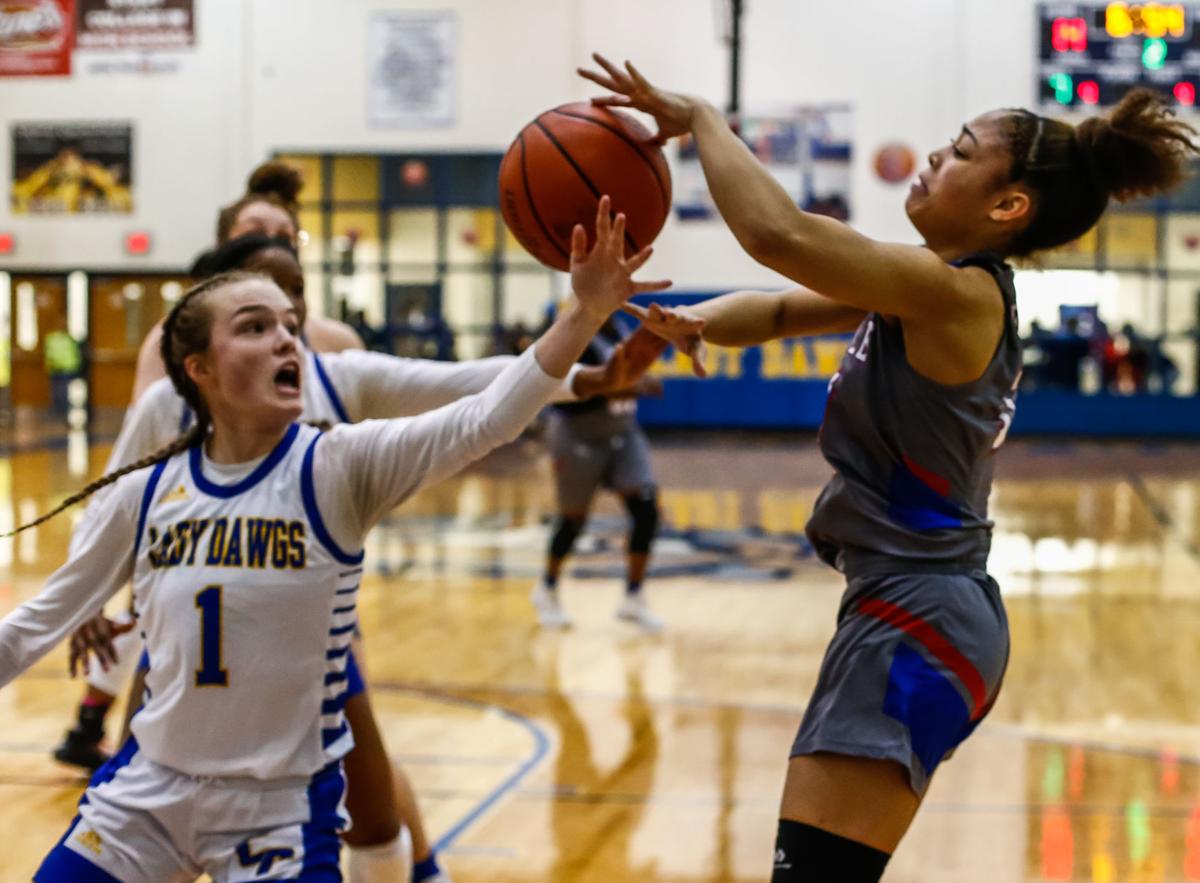 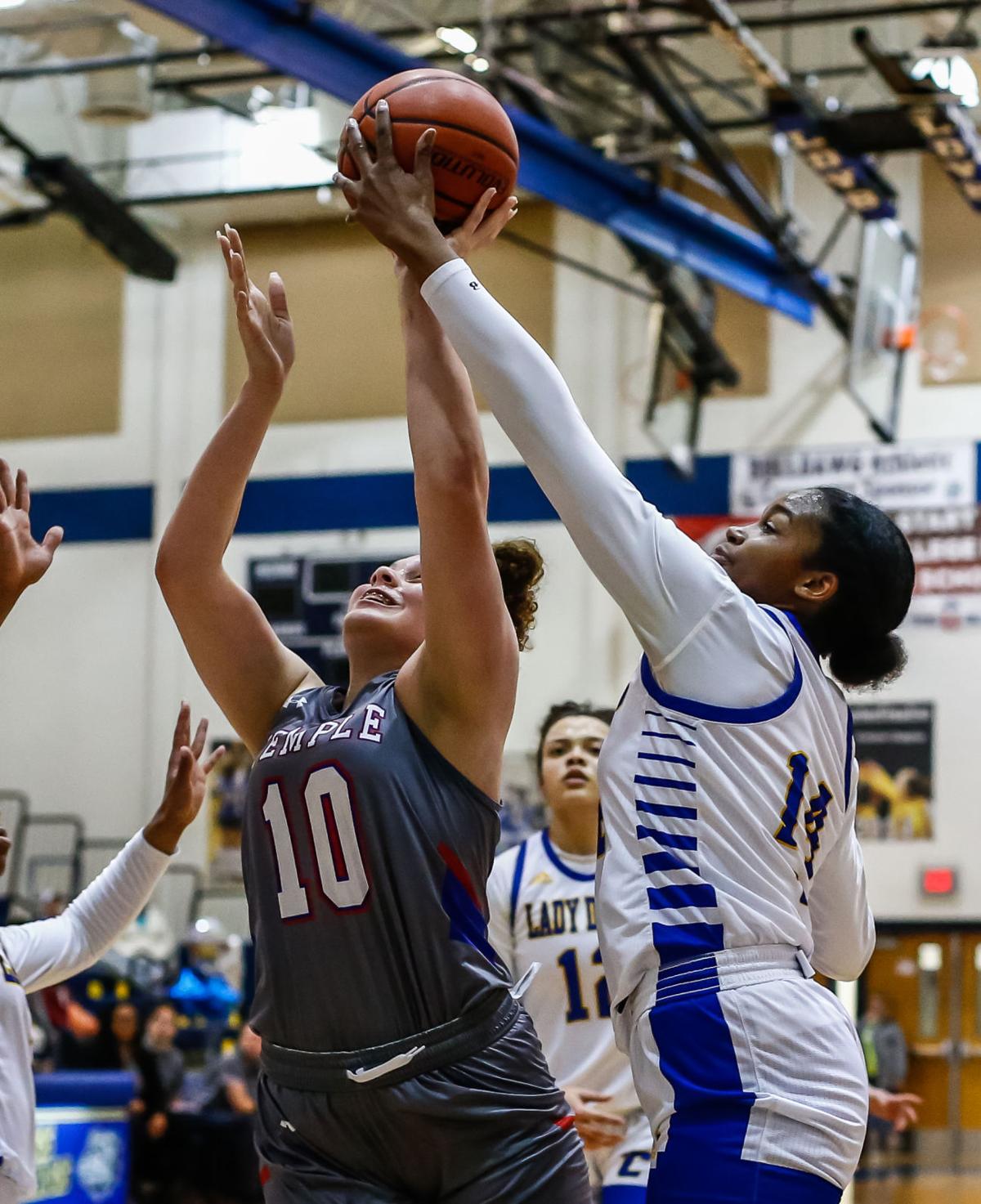 Temple's Taliyah Johnson, front, goes down after being fouled by Copperas Cove's Madisen Honea on Tuesday at Copperas Cove.

COPPERAS COVE — Throughout a back-and-forth affair with Copperas Cove on Tuesday night, Temple found itself down by one with 2.3 seconds remaining in a District 12-6A clash with the winner securing the fourth and final playoff berth.

The Tem-Cats’ Aaliyah Thomas approached the free throw line with her team’s season hanging in the balance.

Taking her first shots from the charity stripe of the game, the sophomore took a deep breath and calmly sank both attempts, sending the Temple faithful into a frenzy and securing the Tem-Cats’ 53-52 win that set up a bi-district matchup with District 11-6A champion Tyler Lee.

Temple joined Harker Heights, Ellison and Waco Midway as playoff representatives from 12-6A.

Wilashia Burleson had a game-high 20 points for Temple (22-13, 9-7) and junior point guard Taliyah Johnson scored 18 points as the two led a charge in the fourth-quarter, which began with the Tem-Cats trailing by four to start.

The playoff berth is the first for Temple under second-year head coach RaShonta LeBlanc and the first trip back to the postseason since the Tem-Cats’ trip to the Class 5A state semifinals during the 2017-18 season. It’s the fourth time in the last five years Temple has secured a postseason berth.

Trailing 37-33, Temple fought back to tie the game at 42 with 4:45 left in the fourth and Johnson’s two free throws tied it at 49 with 1:10 remaining. Knotts split a pair of free throws to give Cove the lead before Burleson’s transition layup made it 51-50 in favor of the Tem-Cats with 18 seconds left. Knotts answered with a layup to make it 52-51 and Thomas drew a foul on a jump shot with 2.3 seconds.

Copperas Cove led 12-11 after the first quarter and Temple took a 22-20 lead thanks to a Burleson steal and assist to Johnson with 3:20 left in the first half. After Micah Anderson made a layup for Cove with 45 seconds left, the squads went into the break tied at 24, setting up an exciting finish.

TEMPLE — Leaned against a wall inside Wildcat Gym about 20 minutes after his team dispatched Copperas Cove 52-47 in workman-like fashion, Temp…