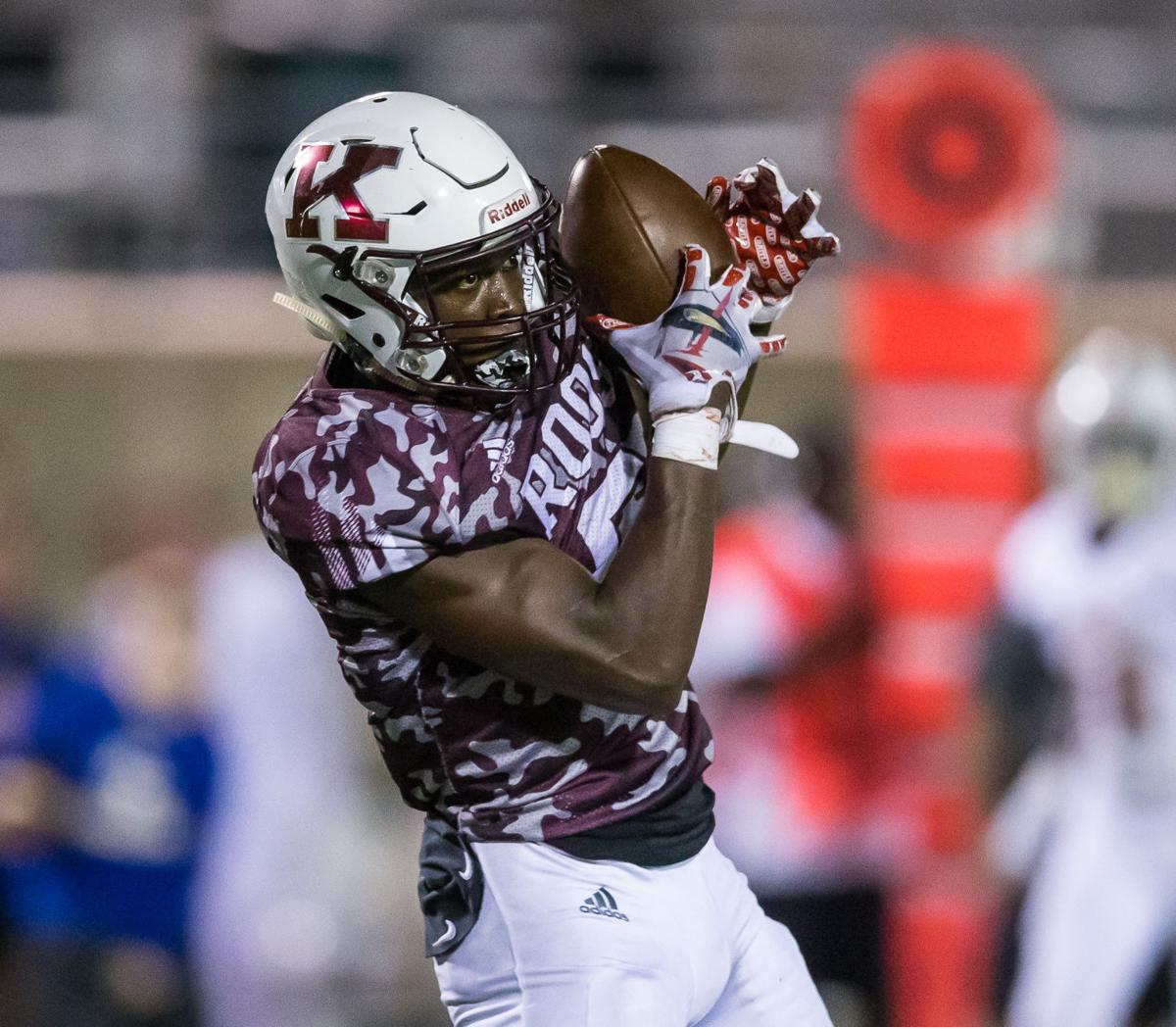 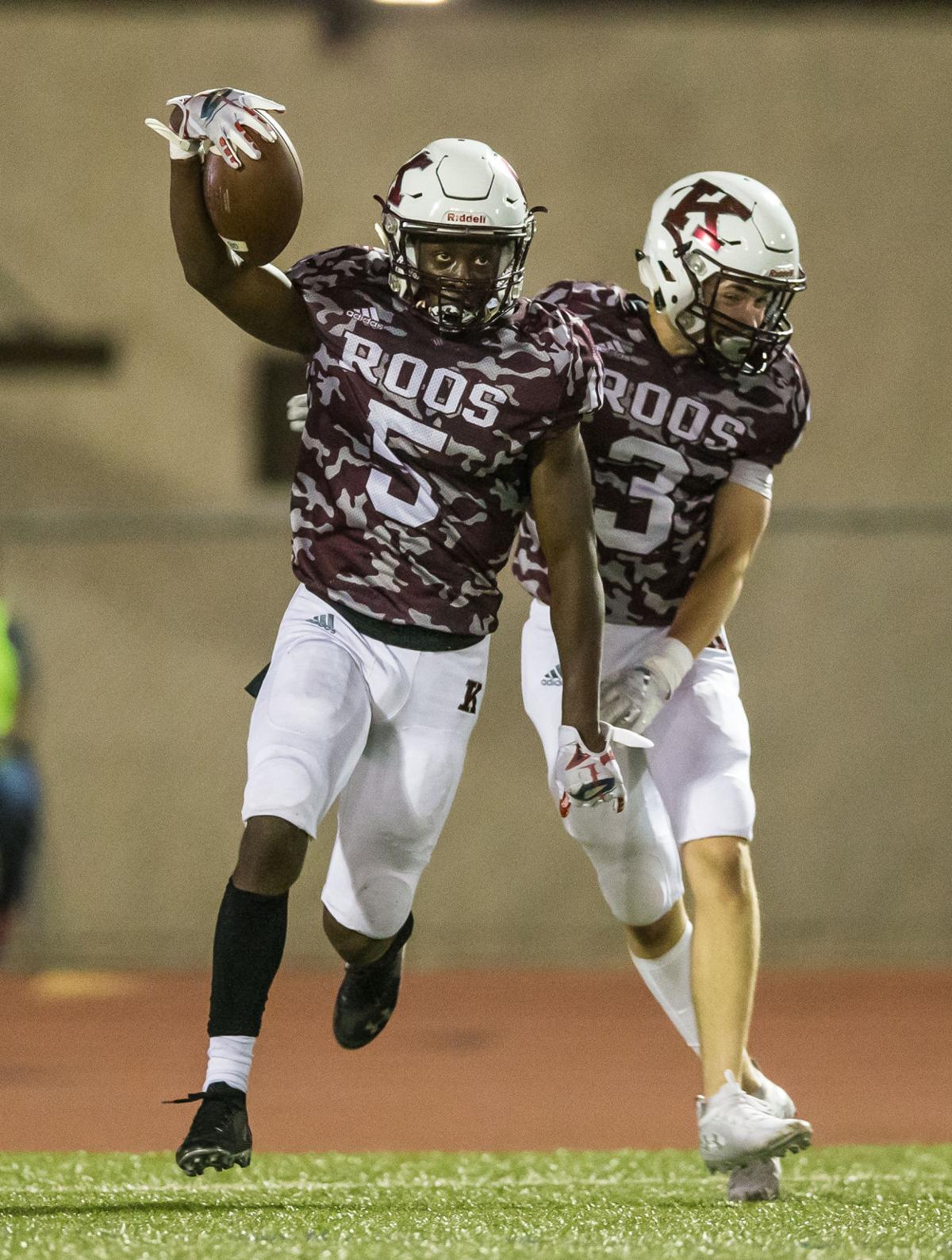 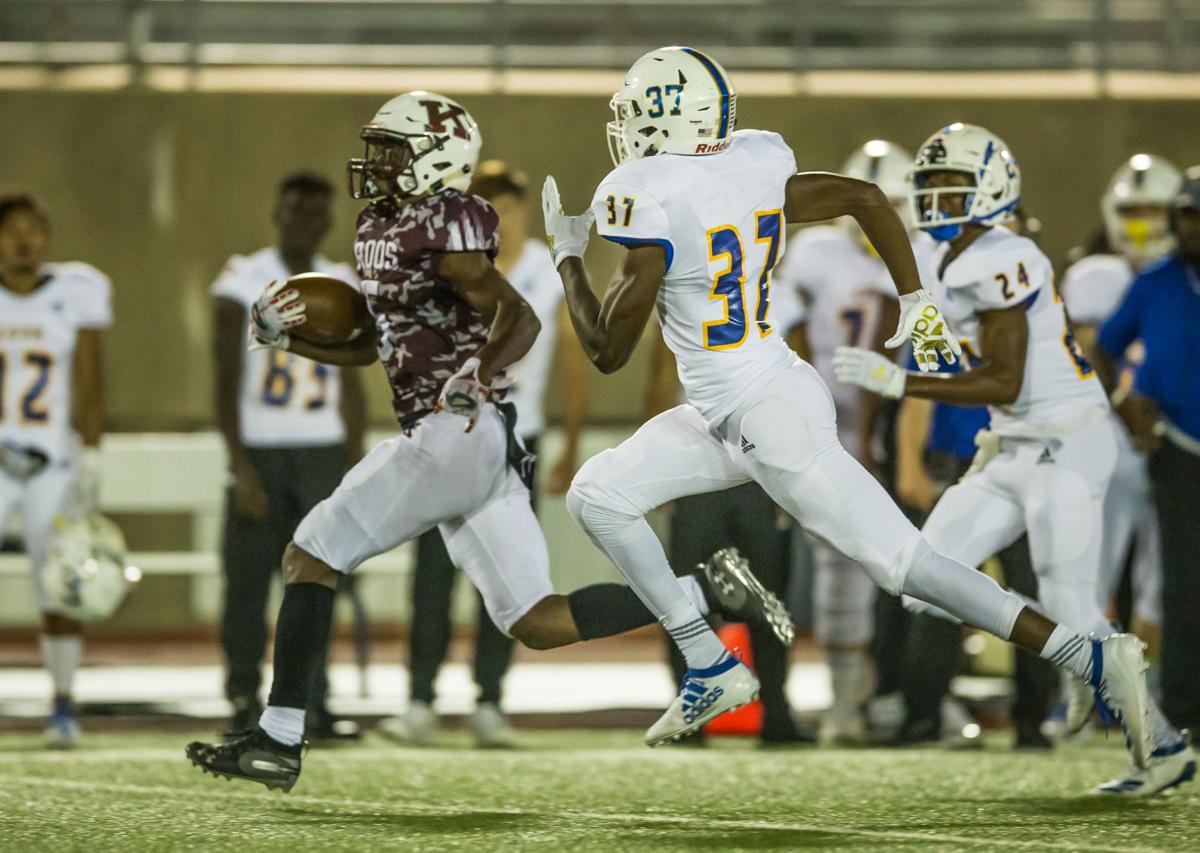 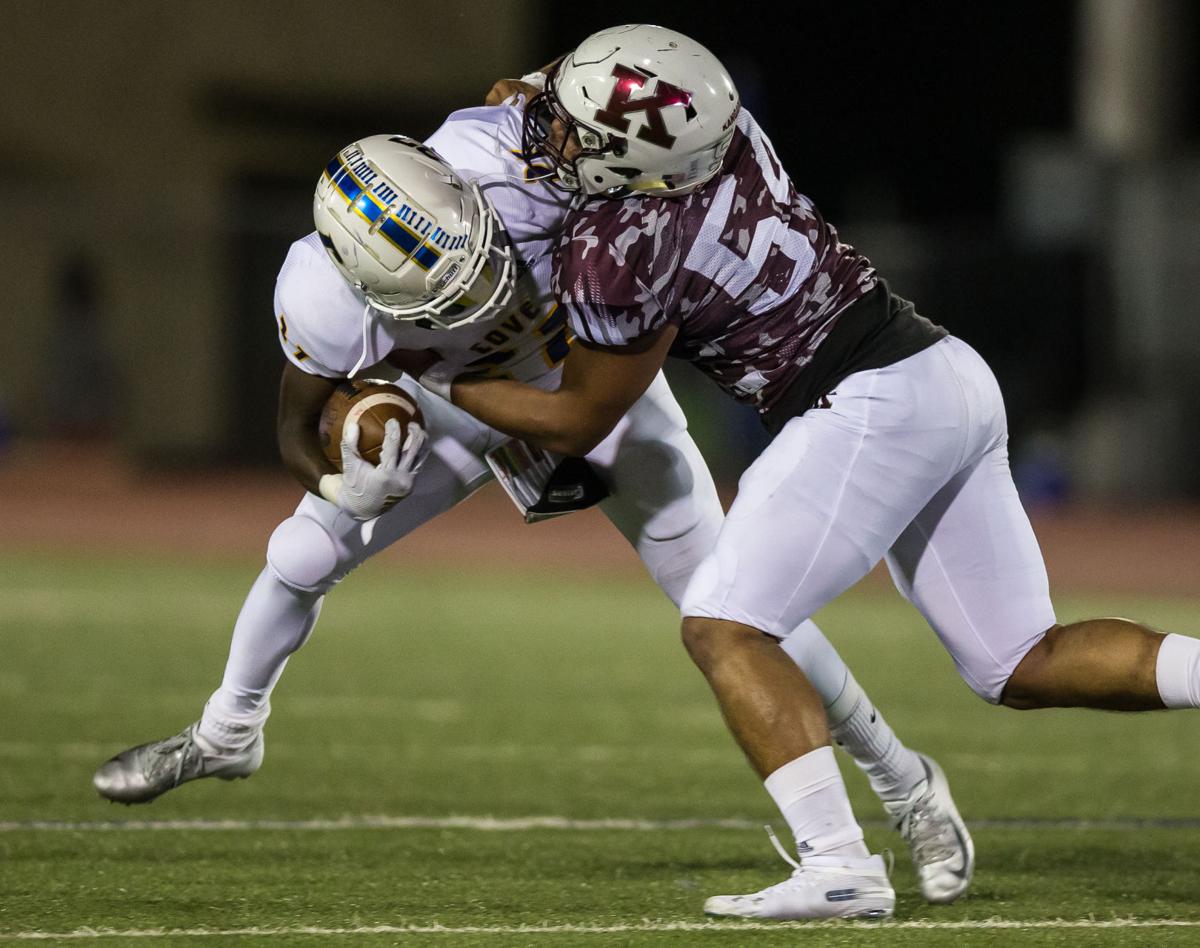 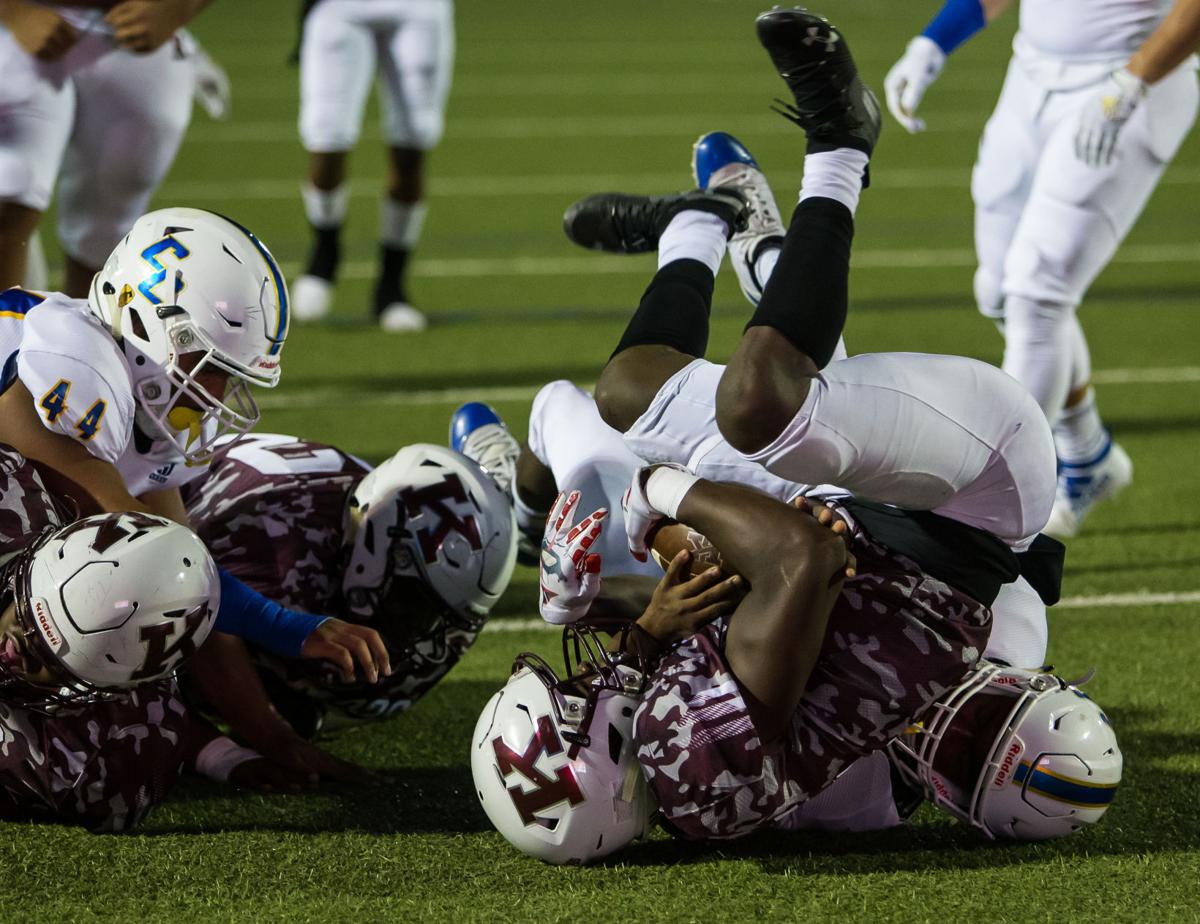 Killeen High's Kadarius Marshall (5) dives in for a touchdown on top of Copperas Cove's Isaiah Chisholm (48) on Friday at Leo Buckley Stadium. 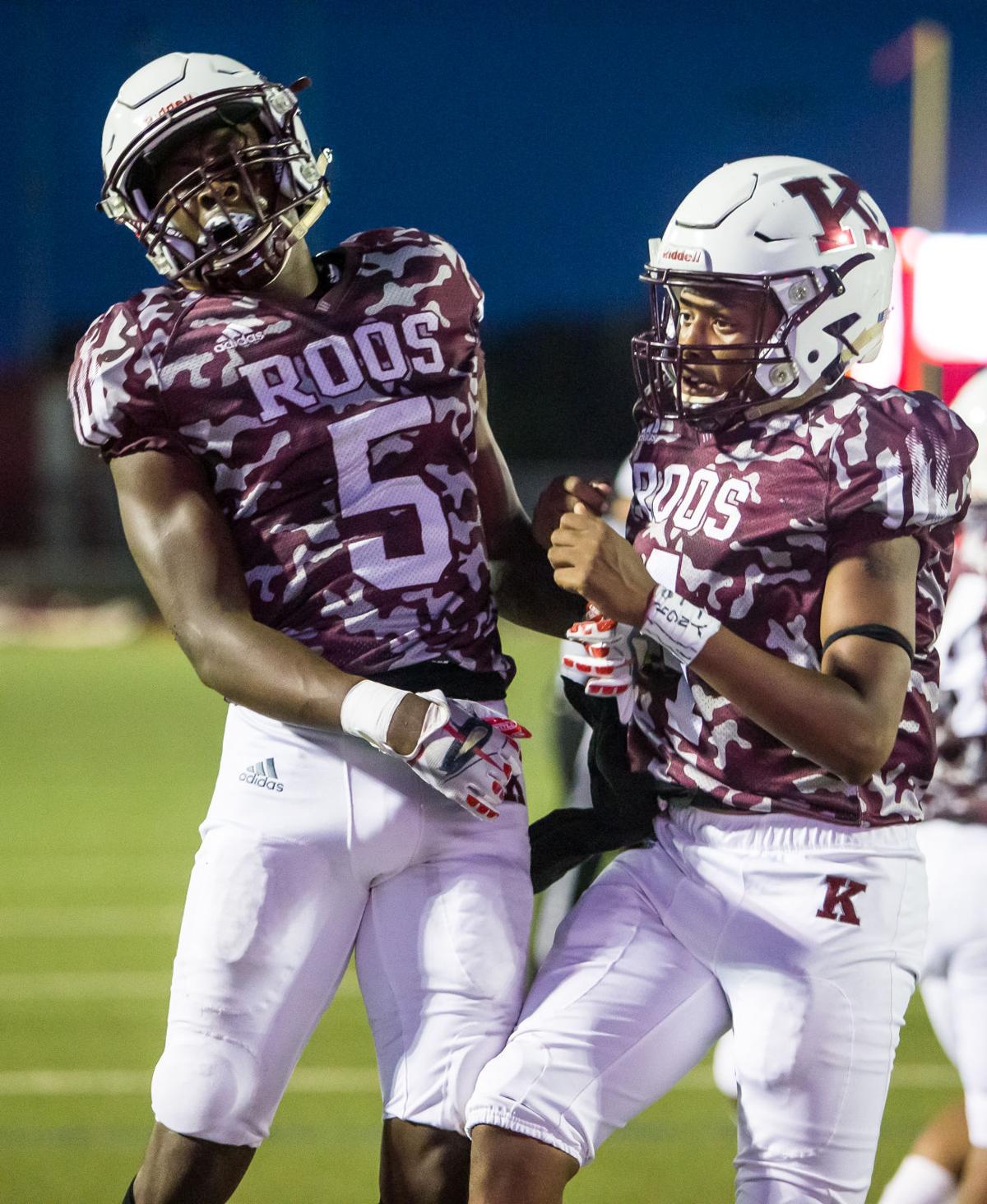 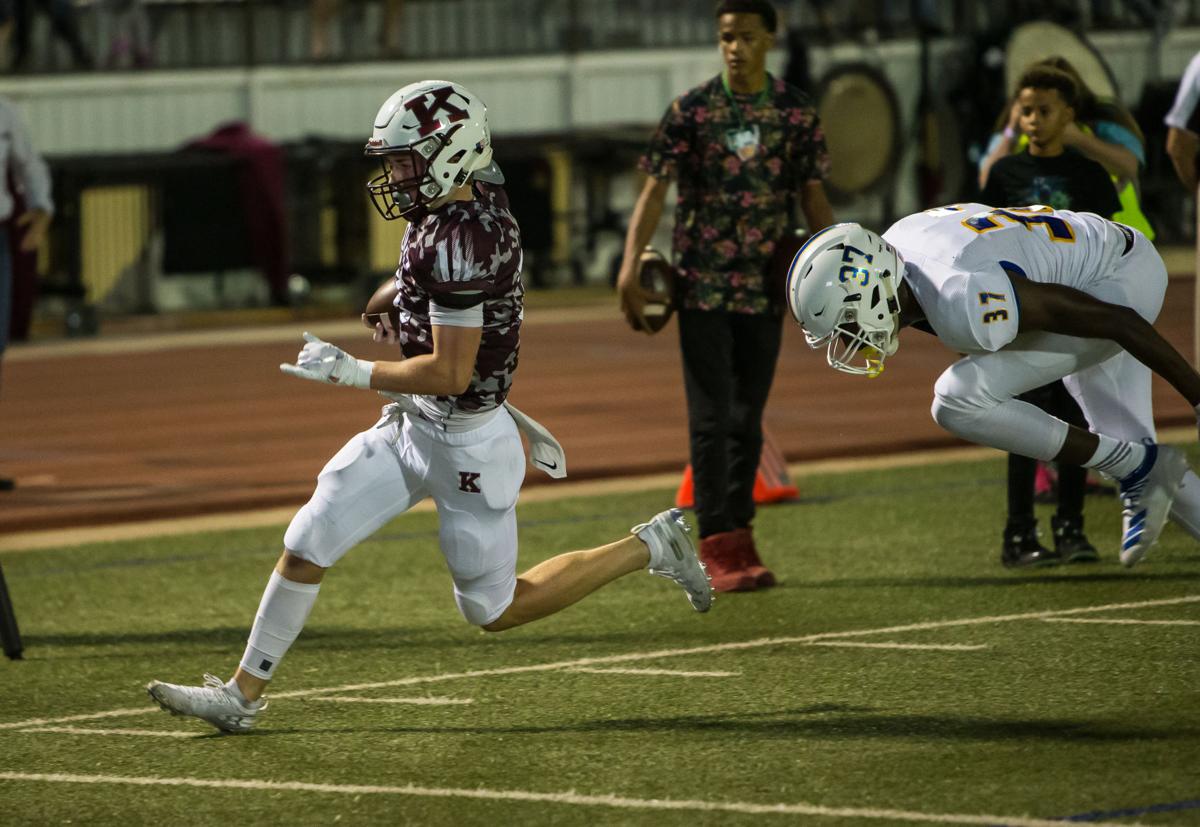 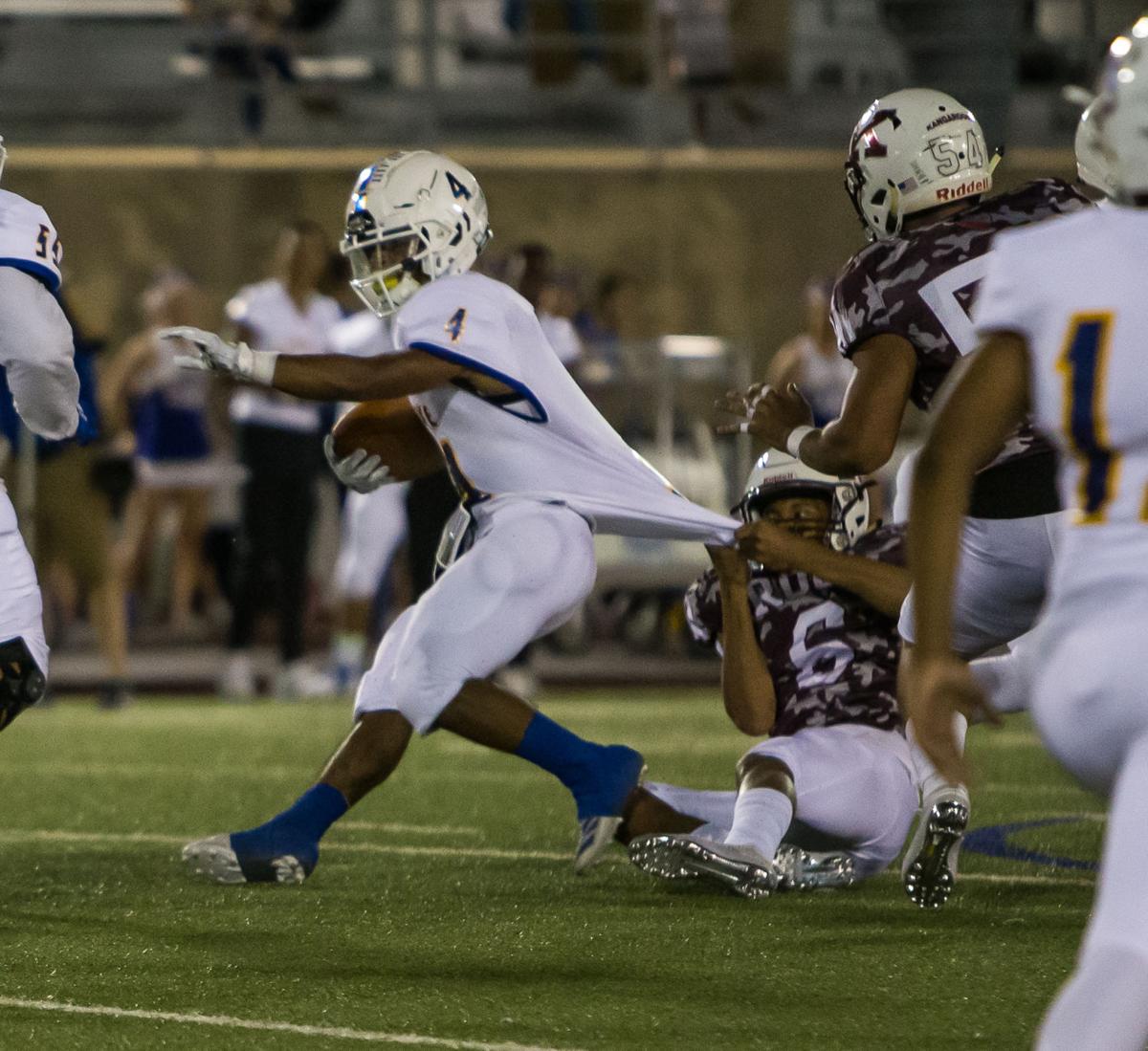 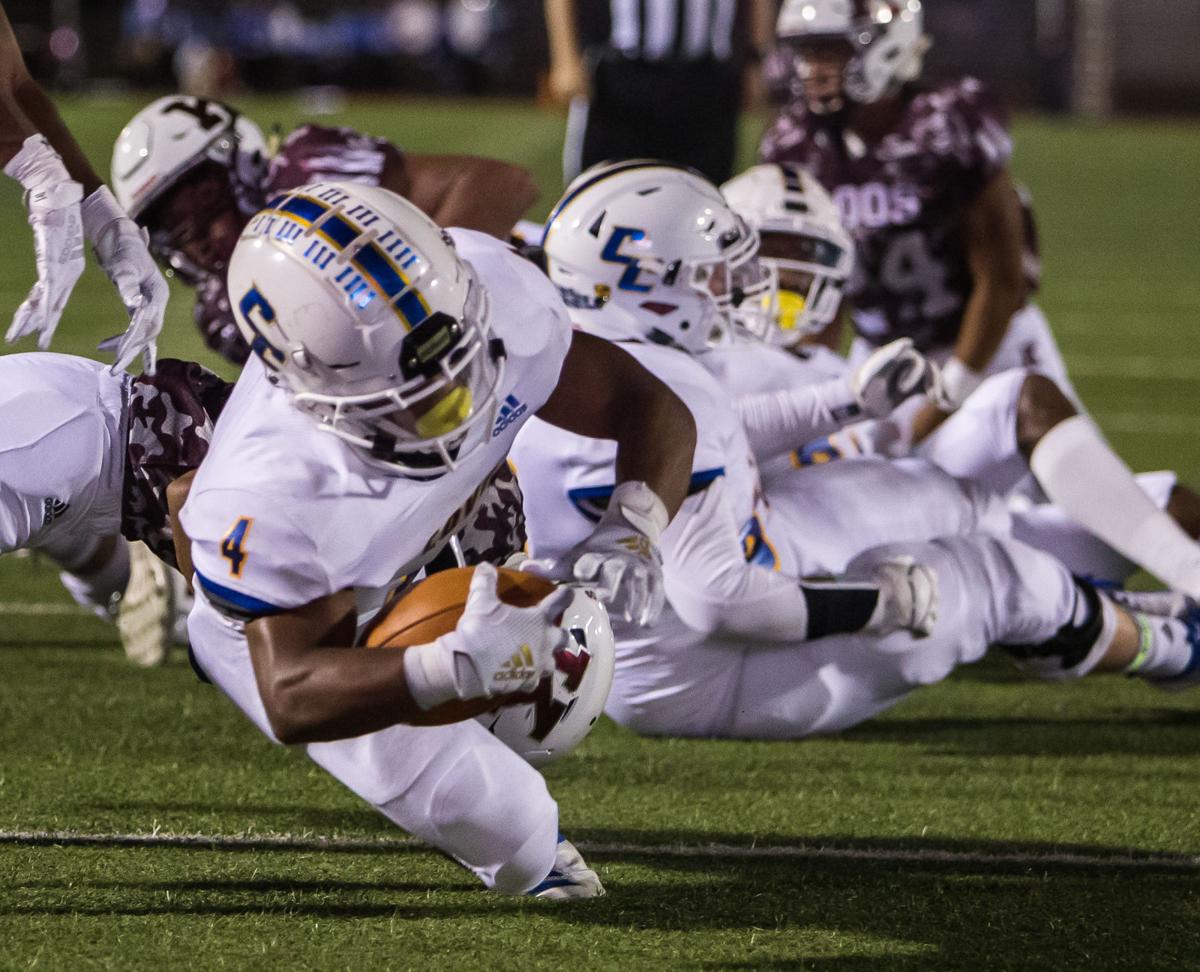 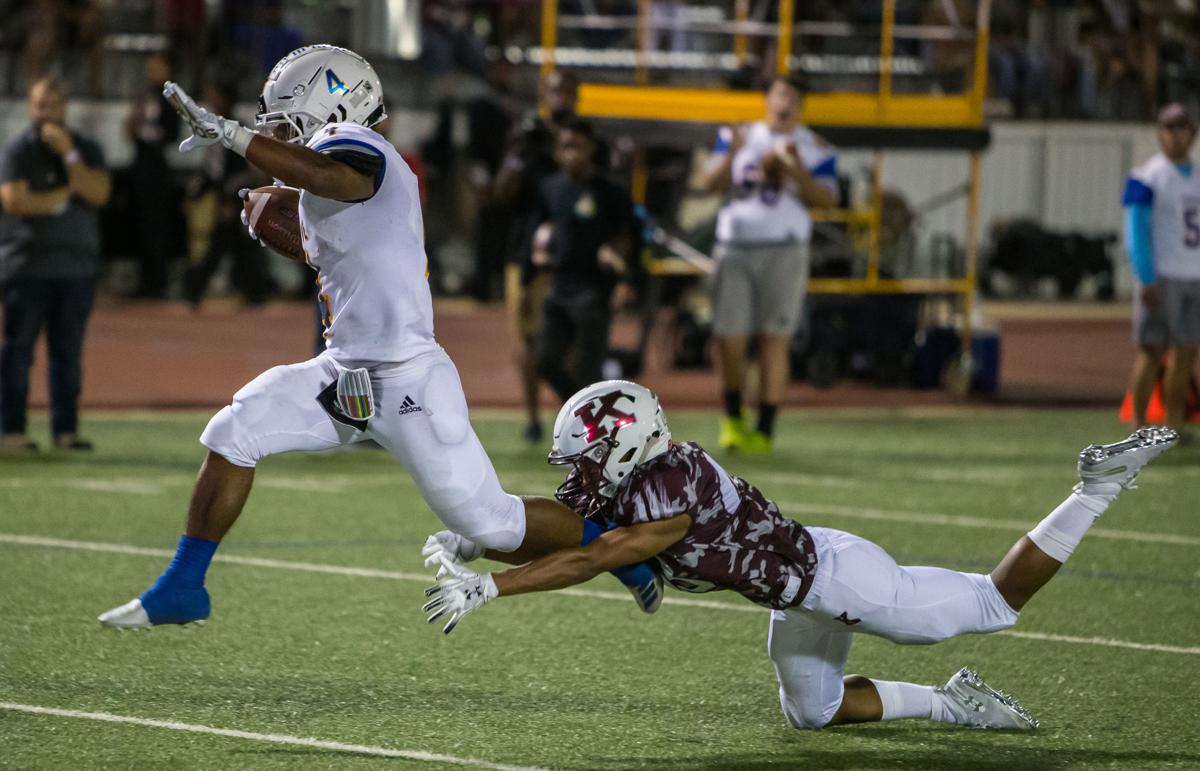 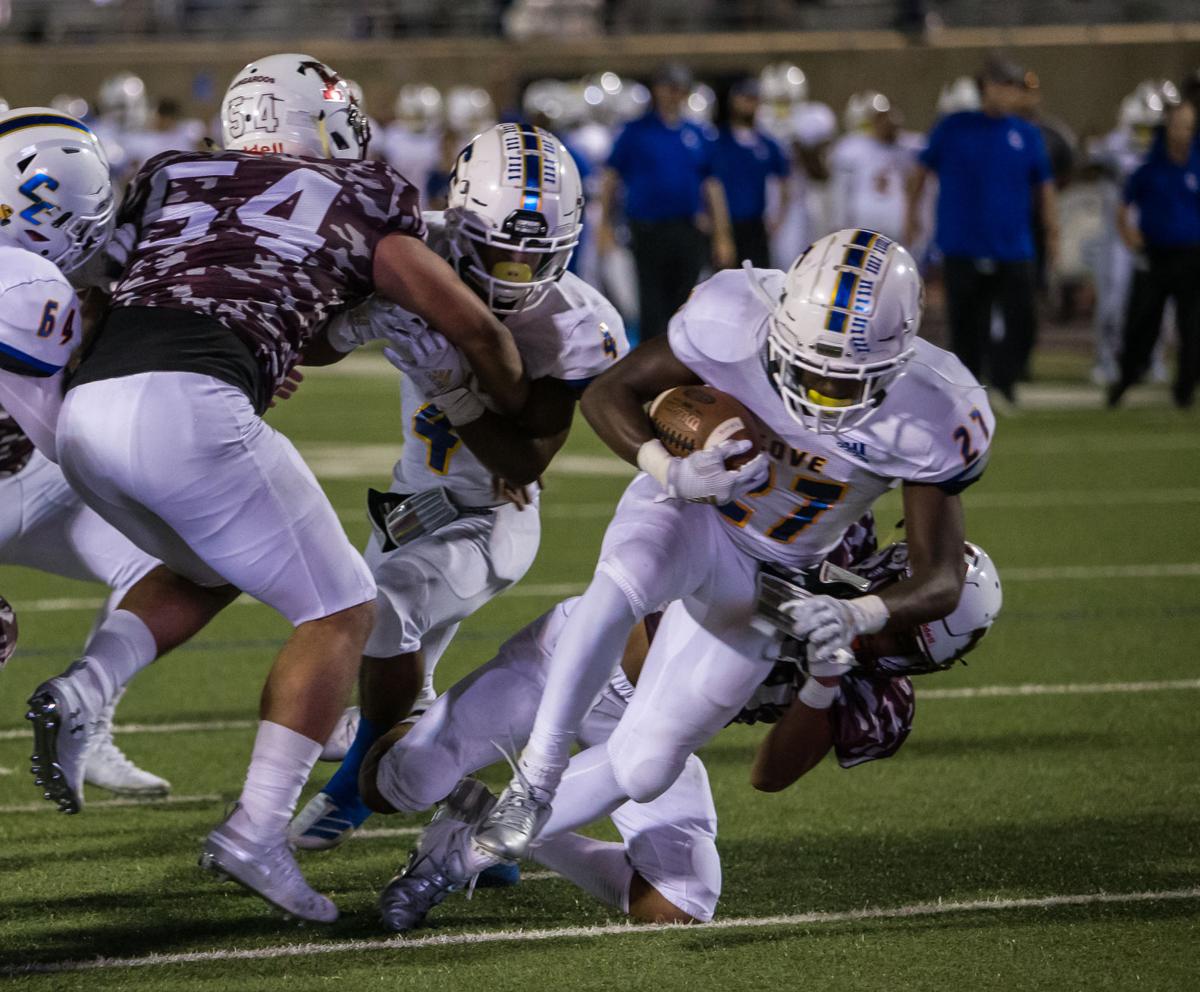 Killeen High's Kadarius Marshall (5) dives in for a touchdown on top of Copperas Cove's Isaiah Chisholm (48) on Friday at Leo Buckley Stadium.

The win snapped the Roos' three-game losing streak to start the season.

Following a rushing touchdown by Elijah Delacruz for the Dawgs (1-3, 0-2) to bring the score to 15-7, the Roos fumbled the kickoff and Cove took possession in Roo territory.

The Roo defense came up with a stop but Killeen quarterback James Terry fumbled on the ensuing possession and Cove recovered again, this time wasting no time as Delacruz scored on the first play of the drive on a 33-yard run.

After a successful two-point conversion the game was tied 15-15. A late receiving touchdown by Marshall gave the Roos a 22-15 lead going into halftime.

The second half continued to be back and forth as Cove came out and scored the first two touchdowns. The first was Delacruz's third rushing TD, from 4 yards out. The second was a 46-yard run by Micah Cox after the Cove defense got a stop.

With the Roos down 27-22, their offense responded. A lengthy drive led to a 6-yard touchdown catch by Marshall to put the Roos back on top 29-27.

The Dawgs wasted no time responding as just a few plays later Cox broke free for a 56-yard run for a touchdown to give Cove the lead again at the end of the third quarter 34-29.

The defenses for both teams fought hard in the fourth quarter but with 4:22 to go, Jayden Hill, normally a defensive back, took a direct snap and ran it in from 3 yards and, after a successful two-point conversion, the Roos had the lead they needed at 37-34.

Hill was an important weapon for the Roo offense in the fourth quarter and Searcy talked about his play.

“He predominantly plays on defense but we’re gonna use him on offense.”

“I was practicing it all week,” Hill said of his direct-snap score. “They told me to be ready, so when it was time for me to go, I was ready.”

Hill also gave a lot of credit to his offensive line and the blocks they provided.

Jack Alvarez, the head coach for the Bulldawgs, was proud of how his team played.

“I’m proud of all the kids,” Alvarez said. “We played a full ballgame tonight. If we play like this, we can win some games and get in the playoffs.”

The Roos will take on the Harker Heights Knights on Friday at Leo Buckley Stadium with a 7:30 kickoff.

The Bulldawgs will head back home and play the Ellison Eagles at Bulldawg Stadium on Friday with a 7:30 p.m. kickoff.

TEMPLE — One year after the Temple Wildcats pummeled Shoemaker 42-6, the up-and-coming Grey Wolves had them on the ropes in Friday night's Dis…