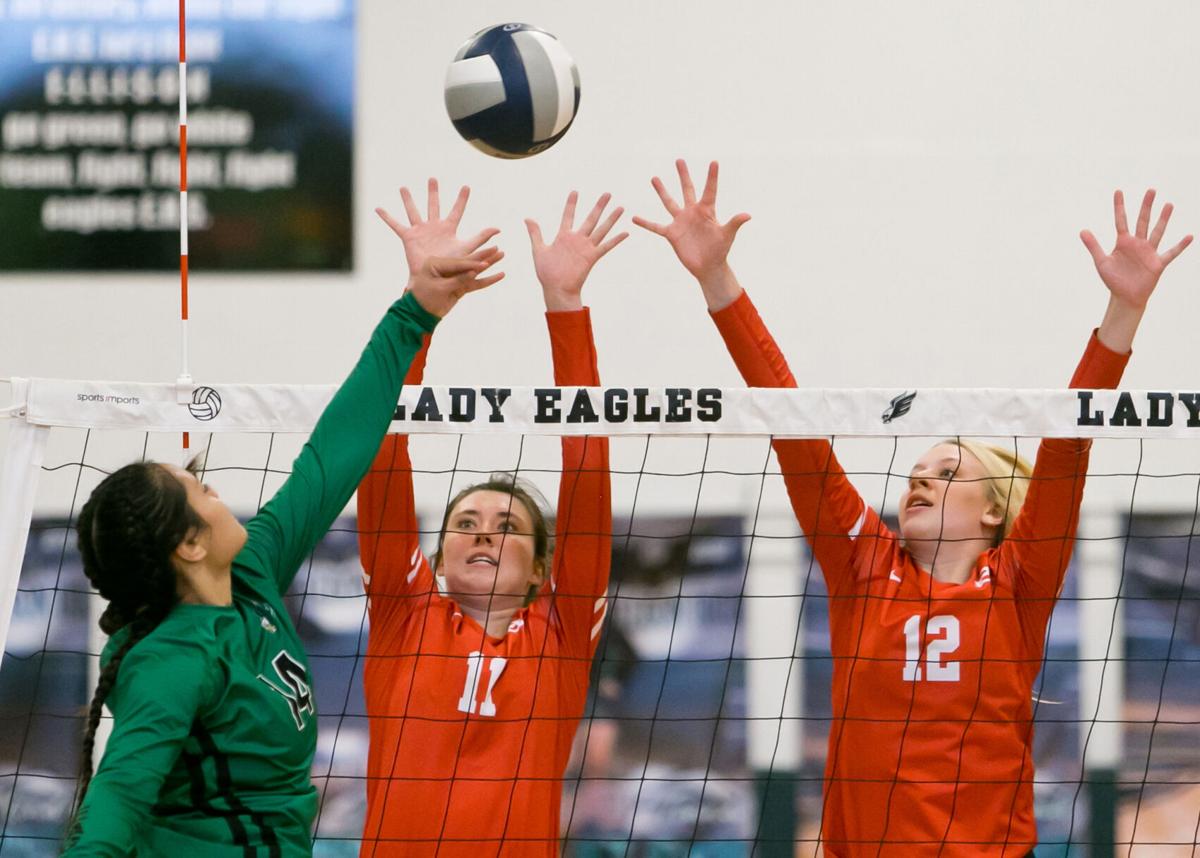 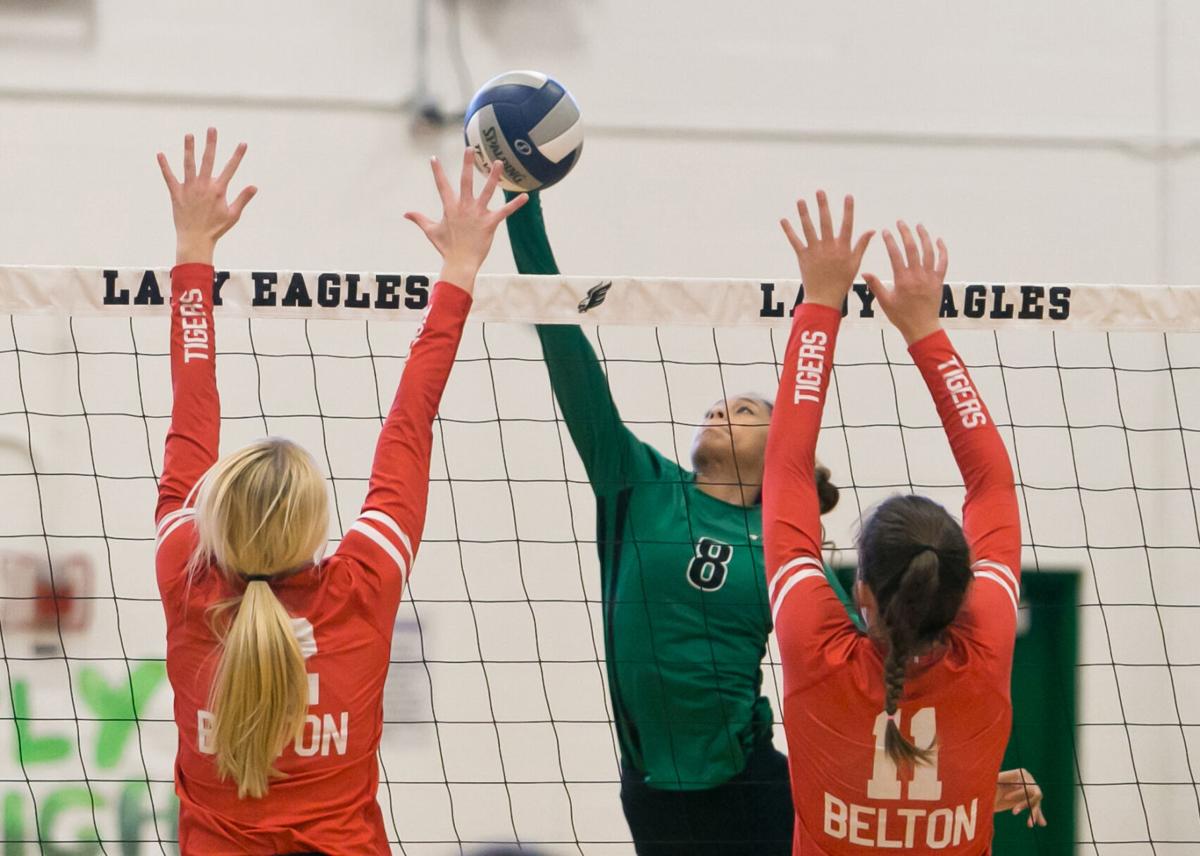 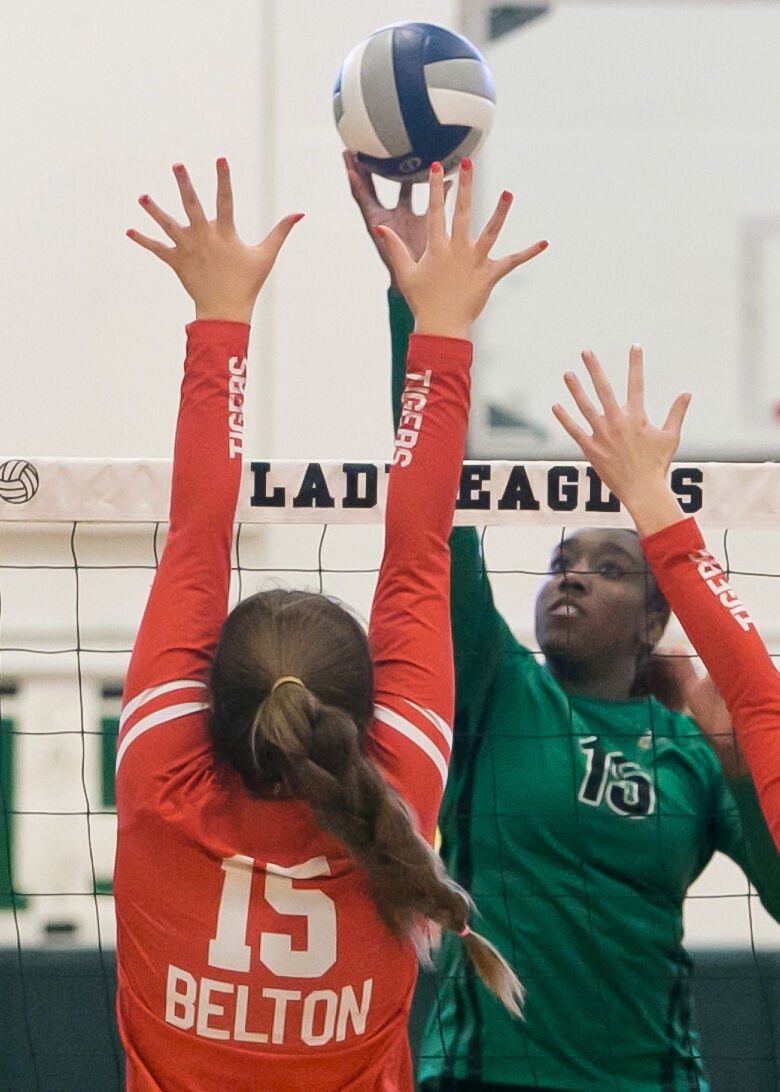 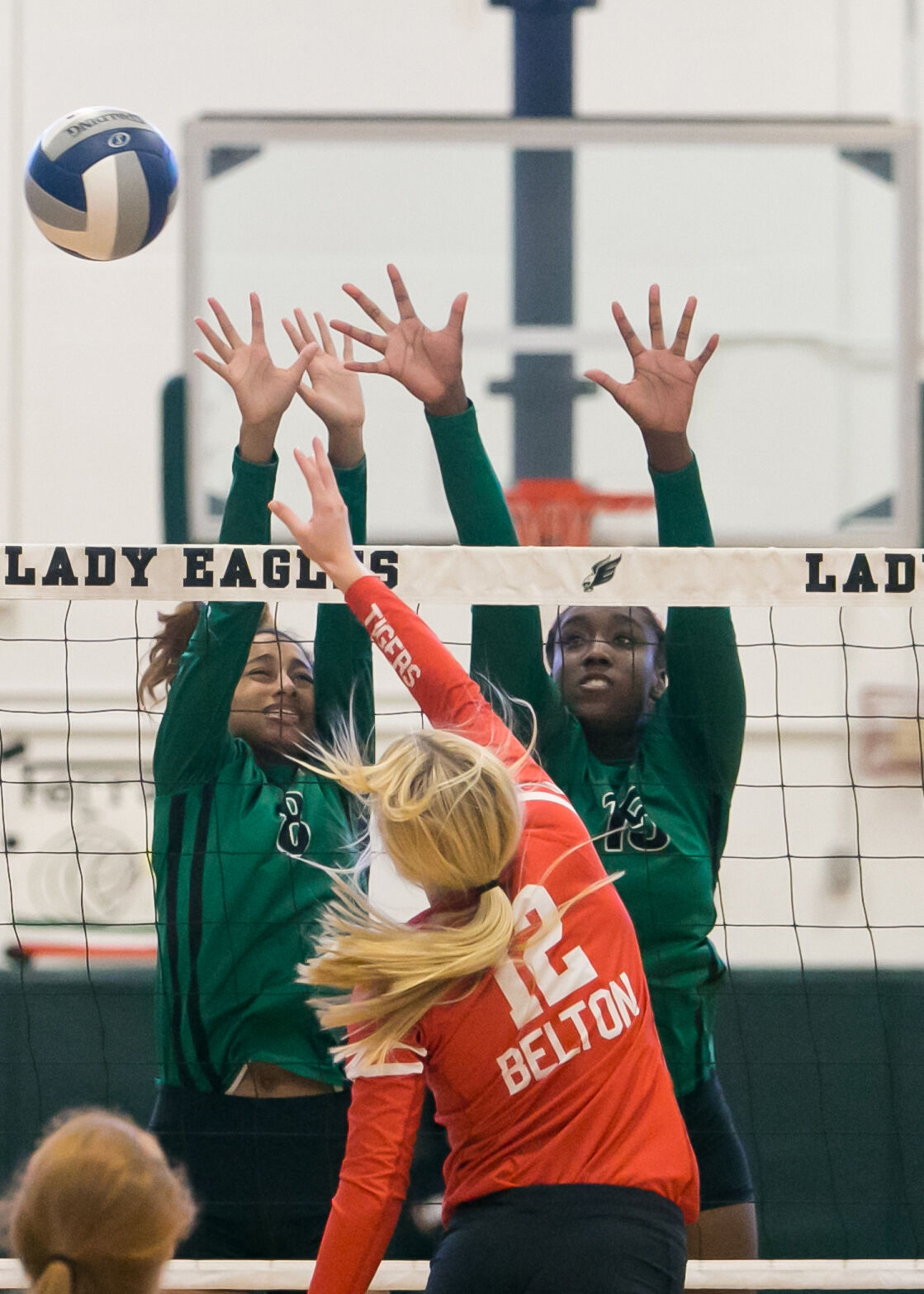 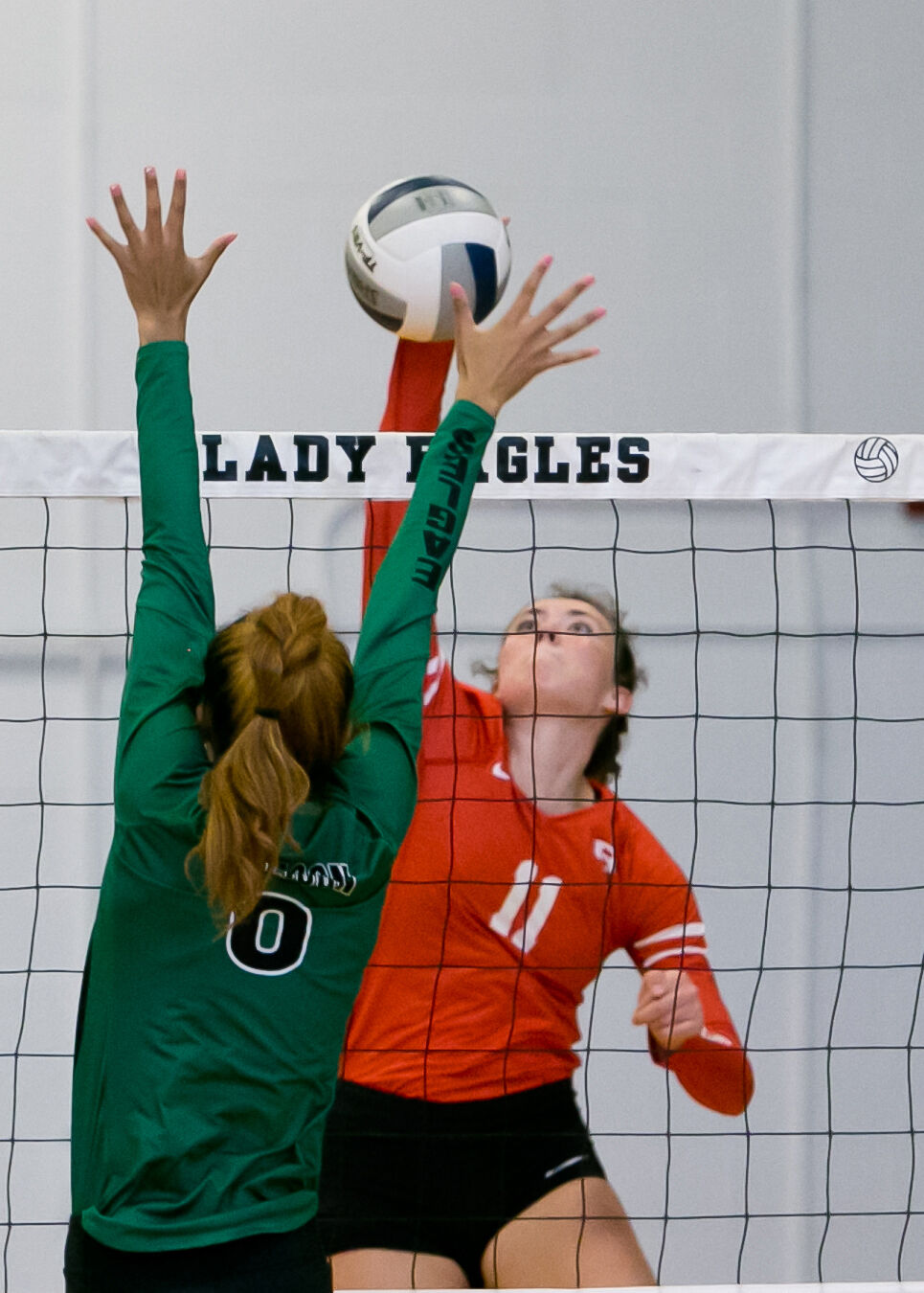 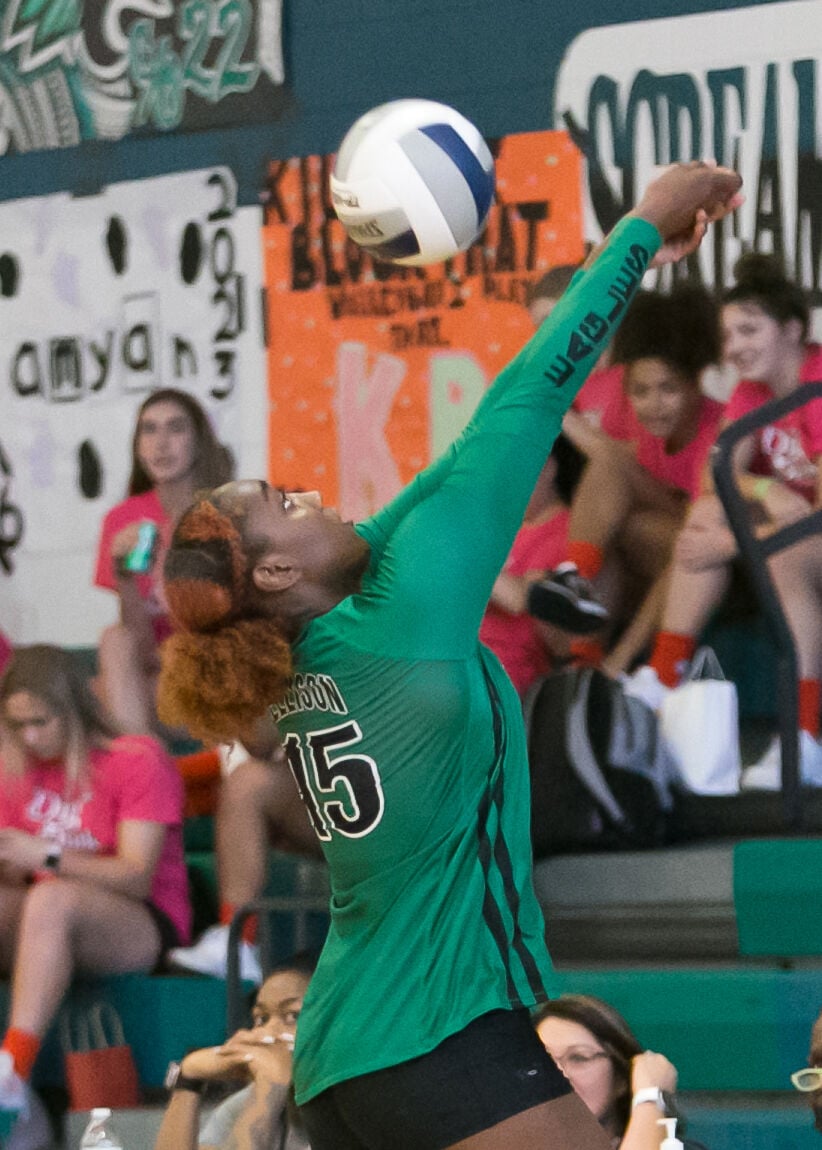 Ellison's Kira Bass (15) makes a save against Belton on Friday at Ellison High School. 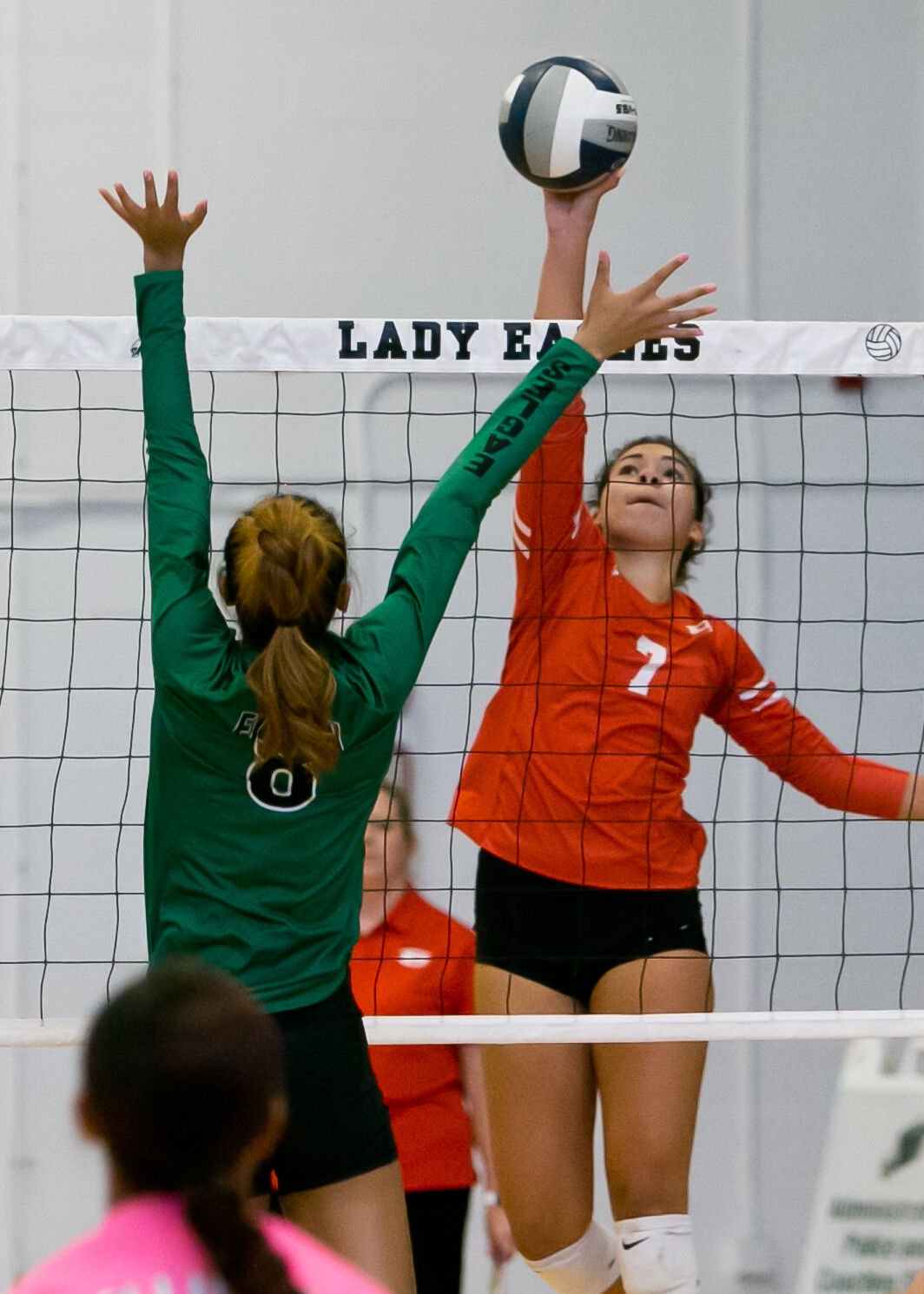 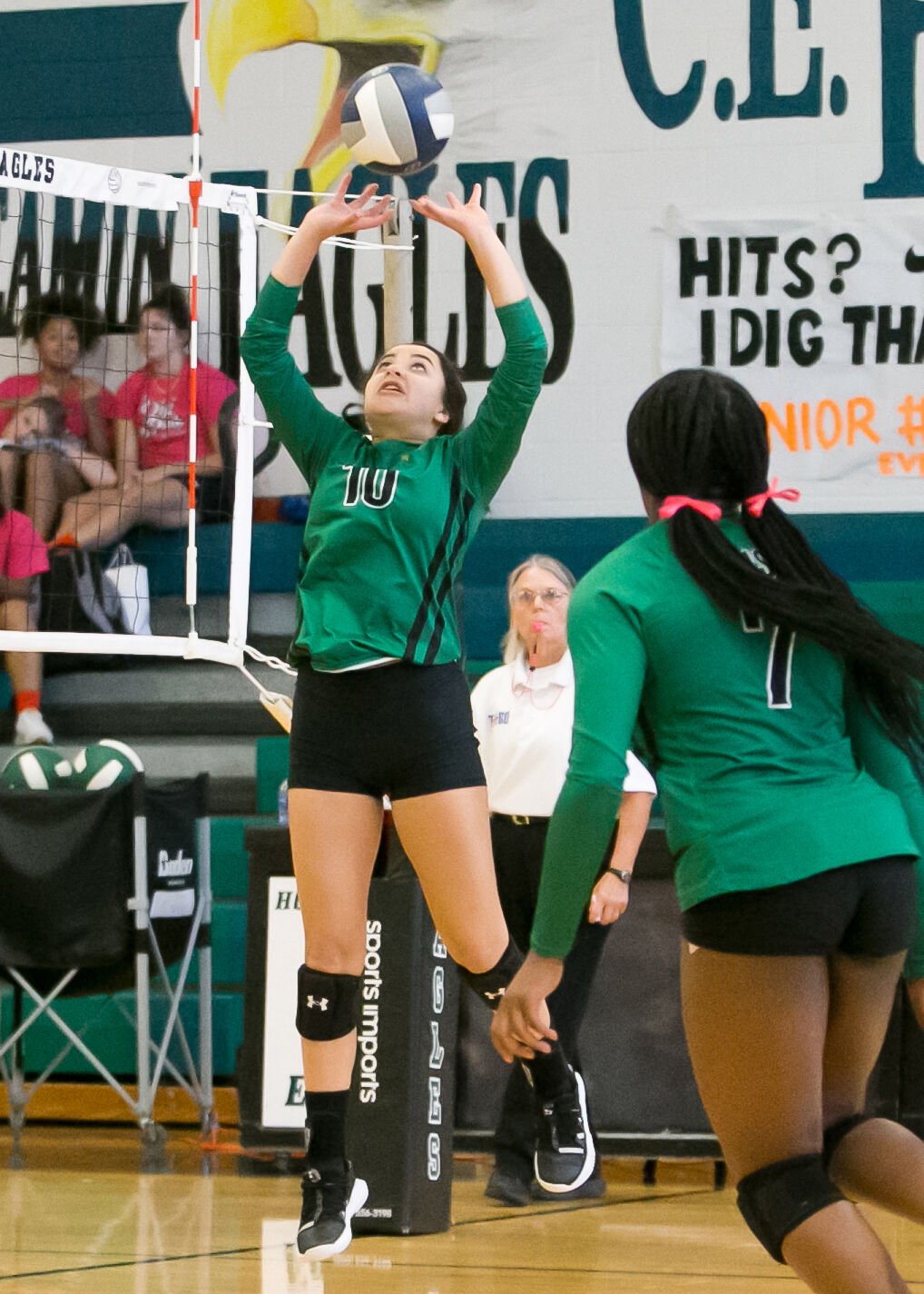 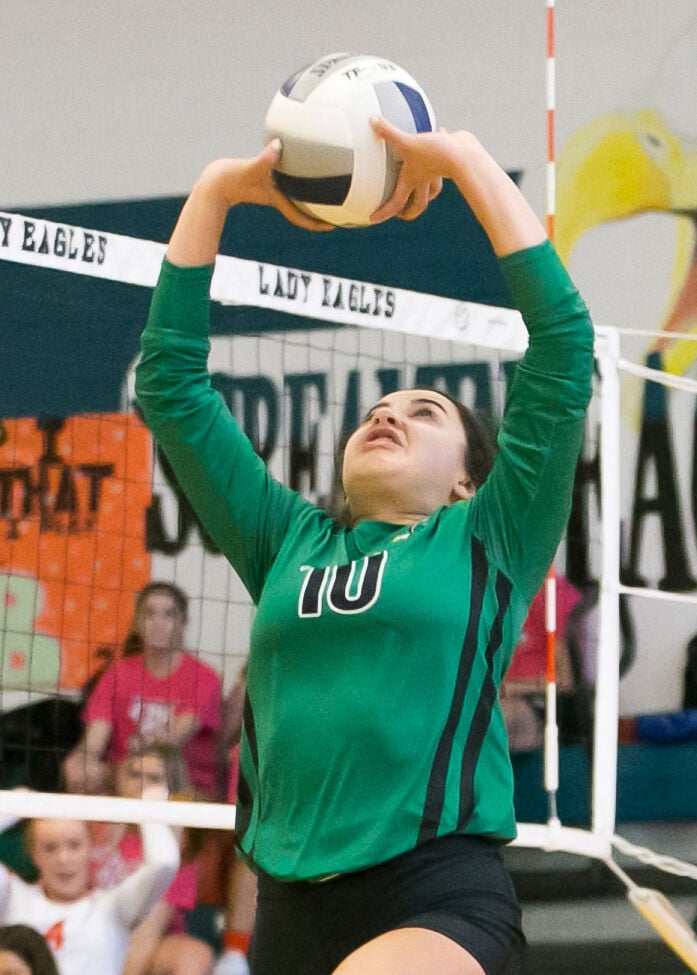 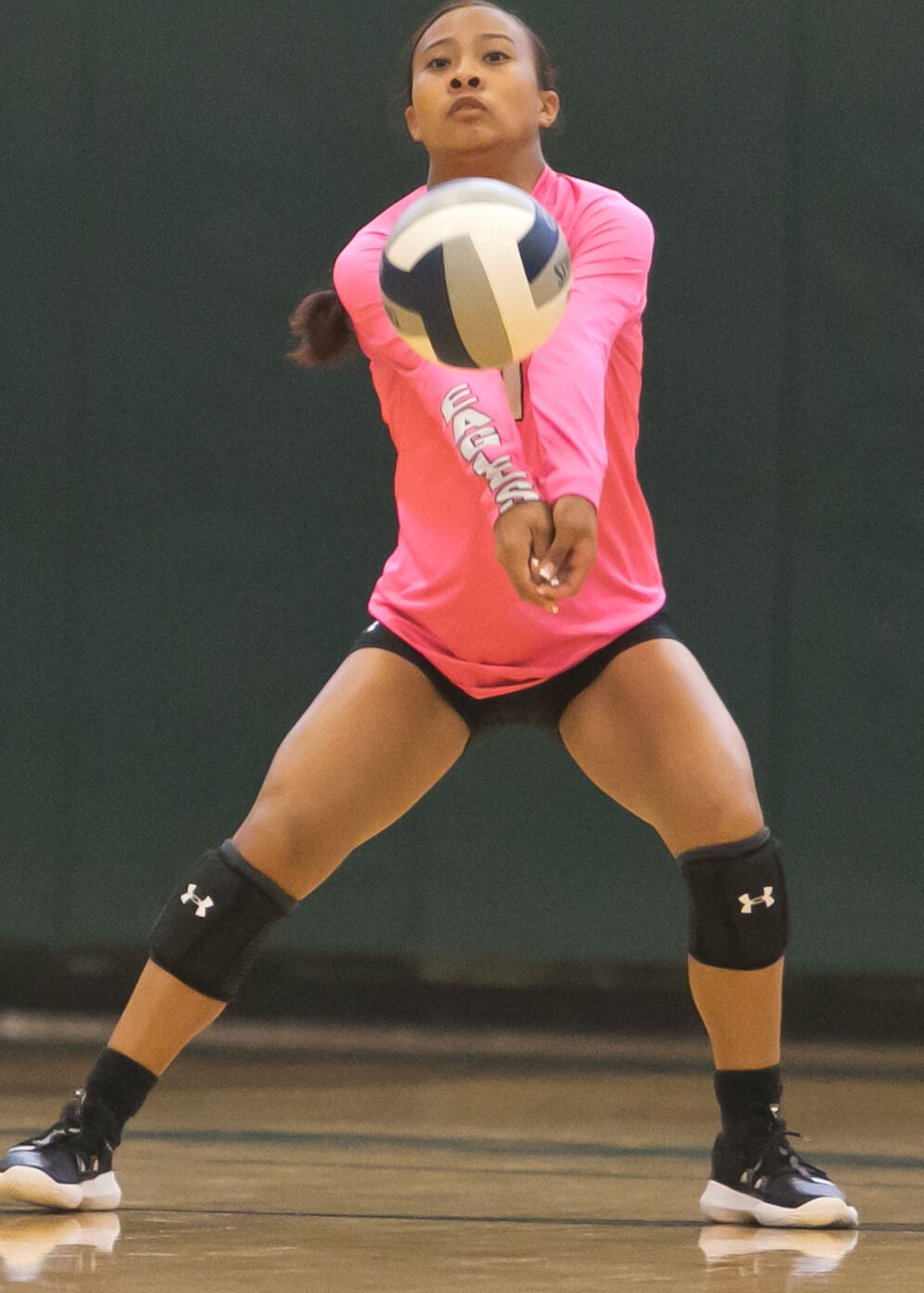 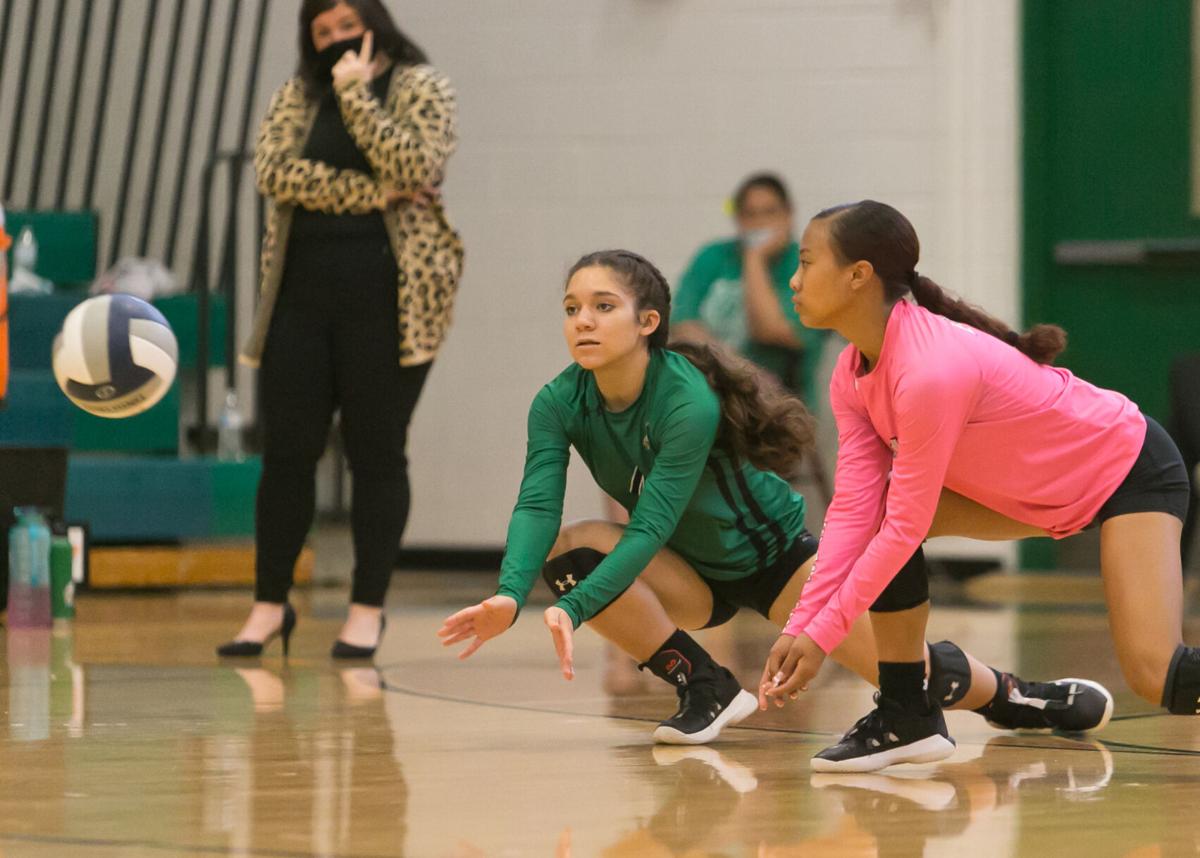 Ellison's Joynis Gonzalez-Rosado (4) and Evelyn Lorenzo (1) attempt to save the ball against Belton on Friday at Ellison High School. 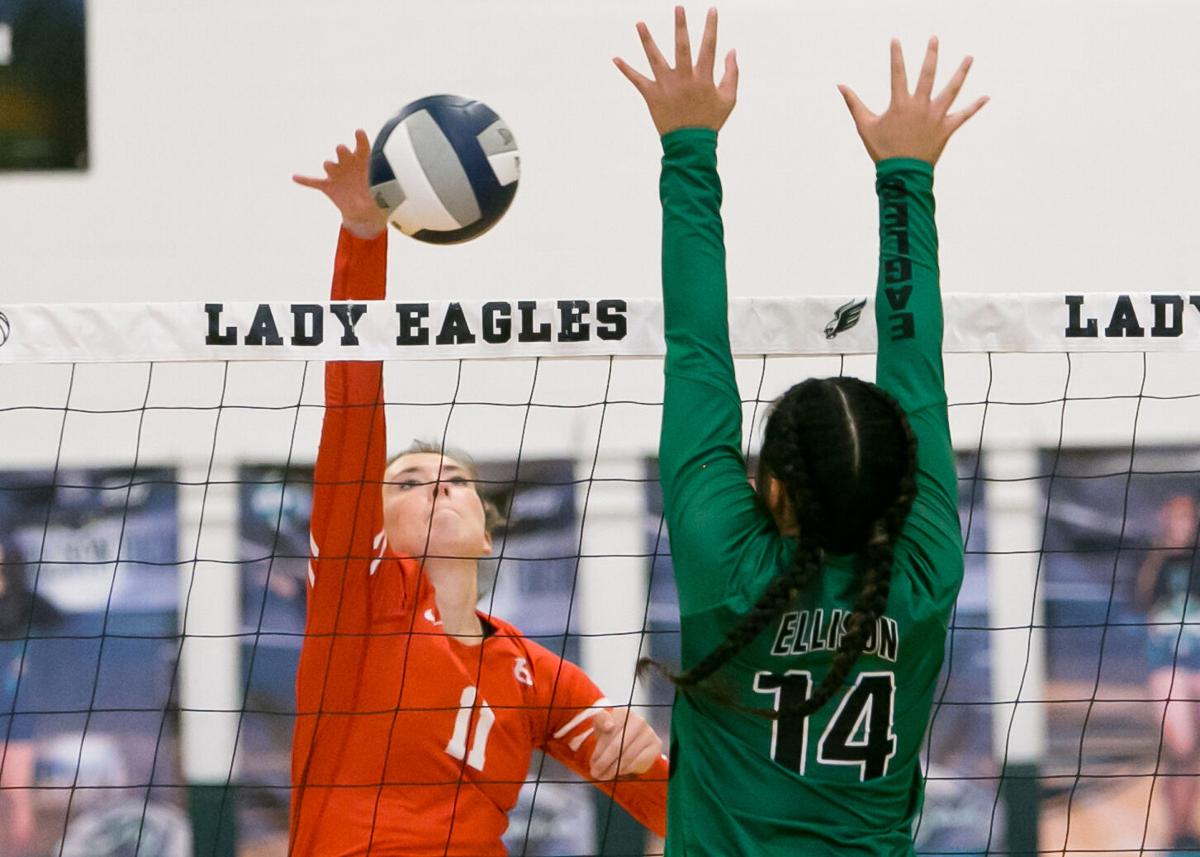 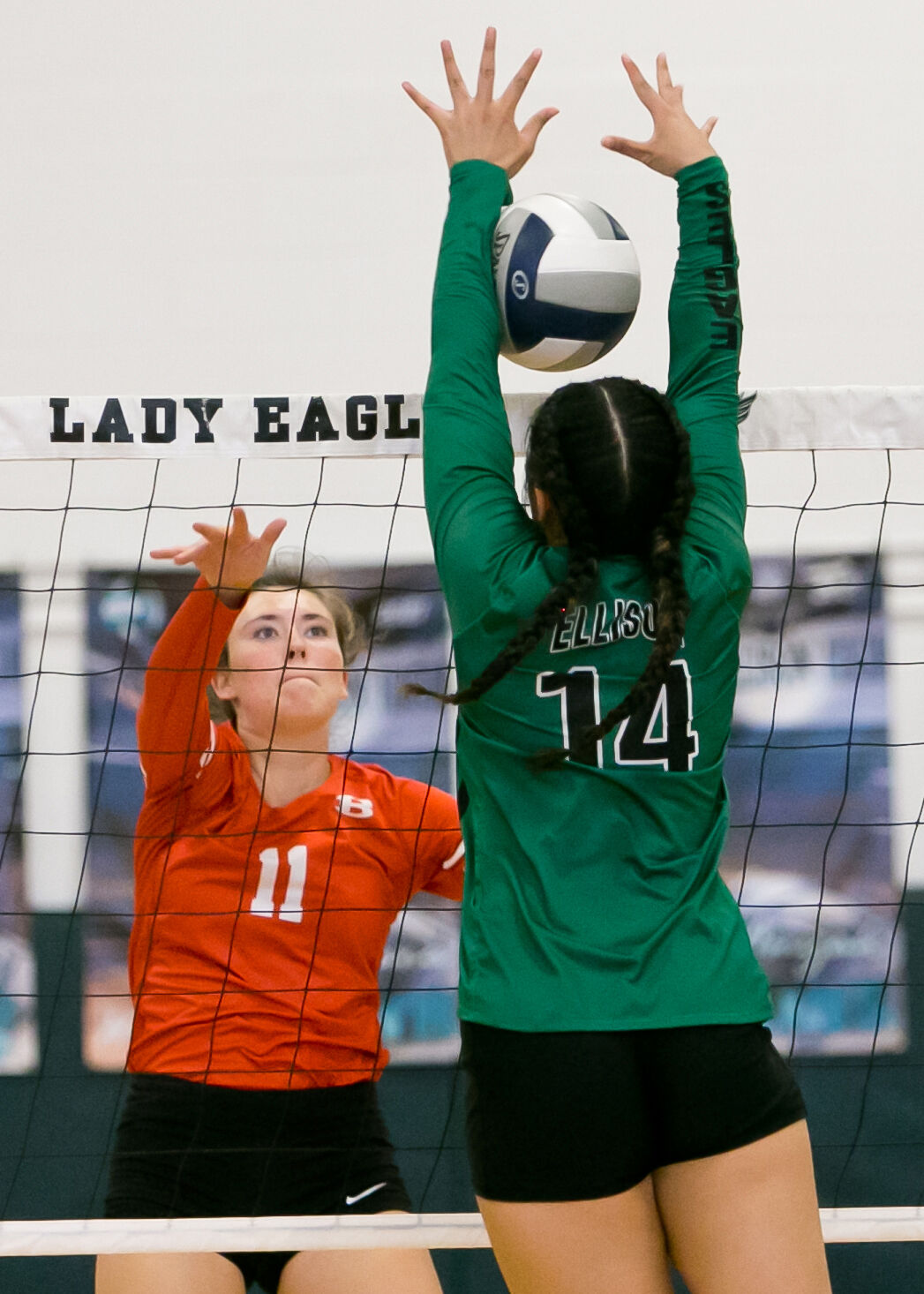 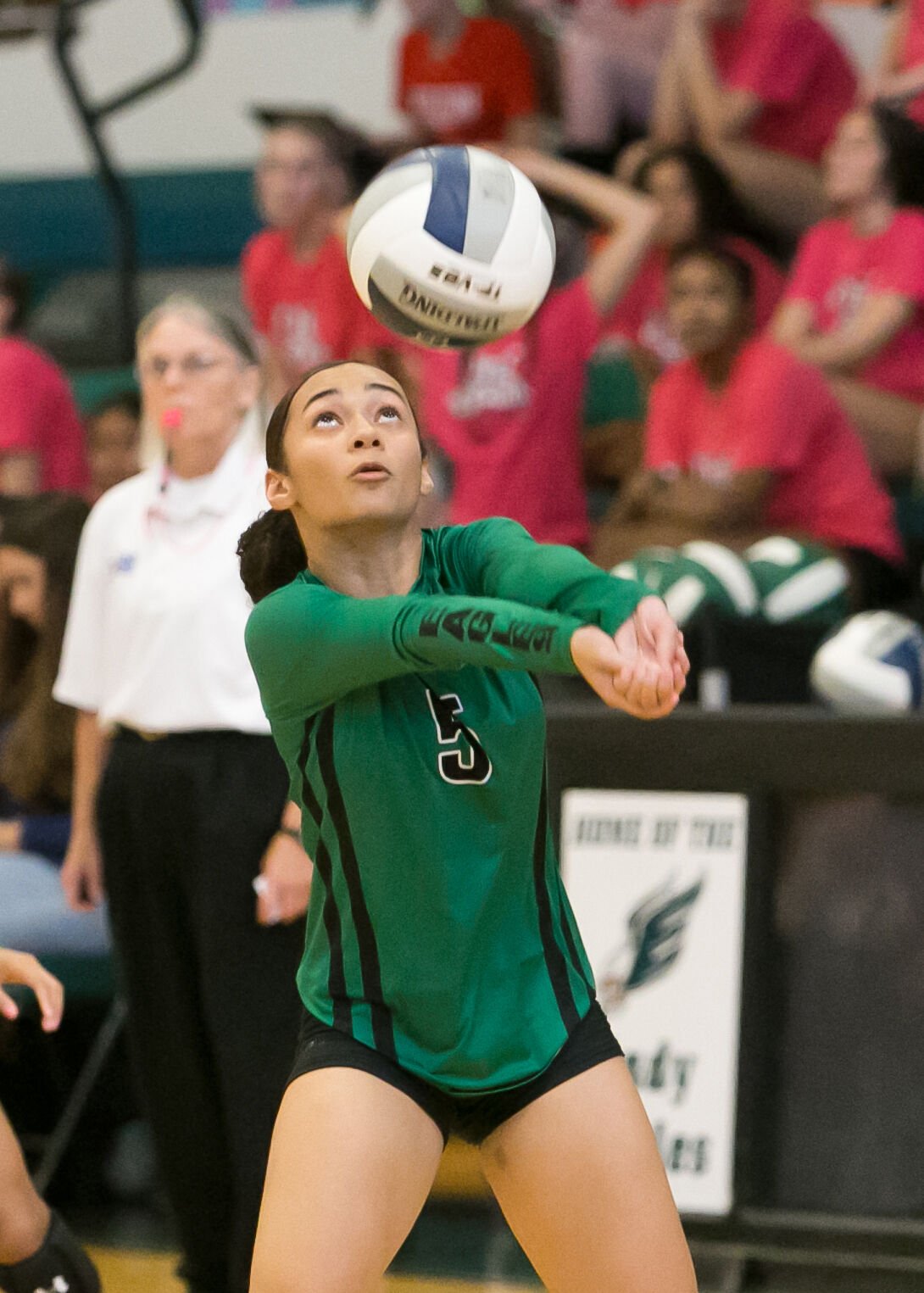 Ellison's Tiana St. Cyr (5) makes a save against Belton on Friday at Ellison High School. 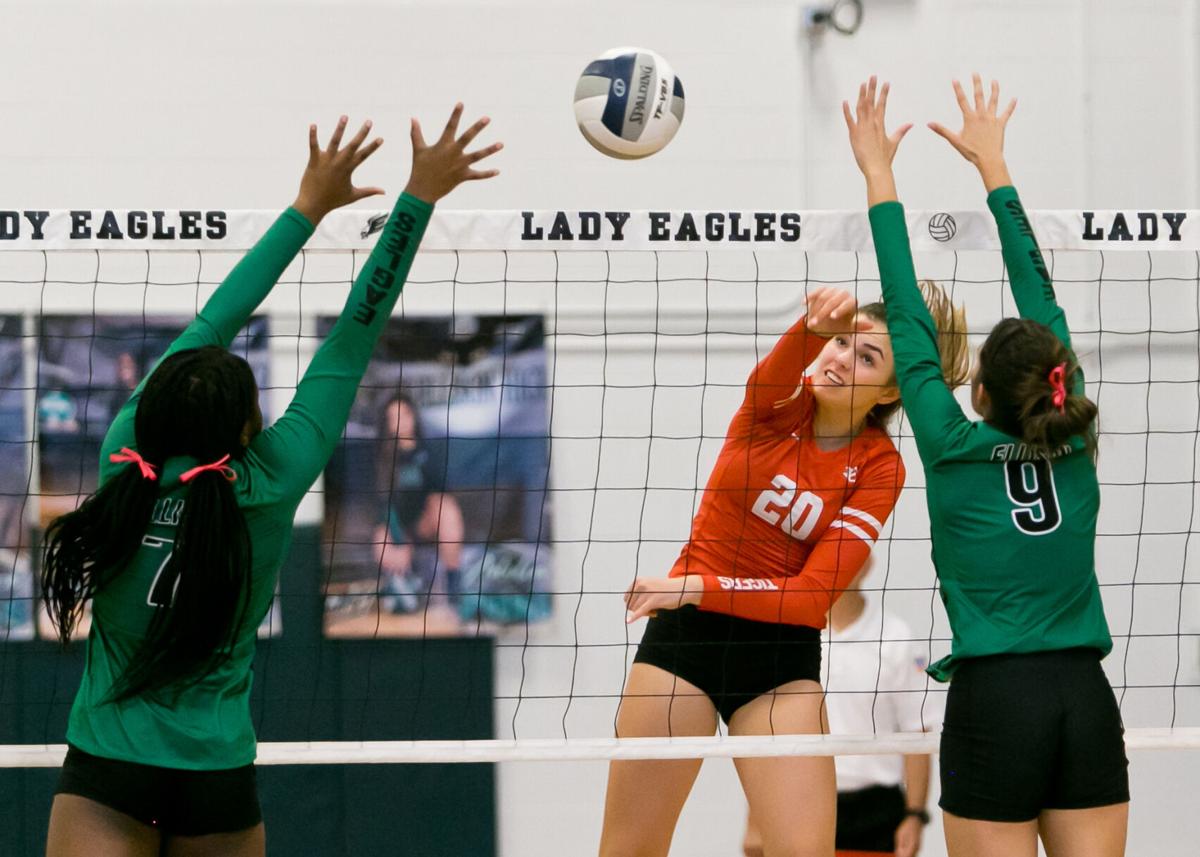 Belton's Carson Thiebaud (20) hits the ball through the blocks of Ellison's Iyahna Hibbler (7) and Ariana Moore (9) on Friday at Ellison High School.

Ellison's Kira Bass (15) makes a save against Belton on Friday at Ellison High School.

Ellison's Joynis Gonzalez-Rosado (4) and Evelyn Lorenzo (1) attempt to save the ball against Belton on Friday at Ellison High School.

Ellison's Tiana St. Cyr (5) makes a save against Belton on Friday at Ellison High School.

Belton's Carson Thiebaud (20) hits the ball through the blocks of Ellison's Iyahna Hibbler (7) and Ariana Moore (9) on Friday at Ellison High School.

Adelia Puni wanted a memory of her final home match, so she created one.

Despite being playoff bound, Ellison’s outside hitter understood she would never get another opportunity to play inside the Eagles’ gymnasium, and midway through the second set, it appeared the night would not be remembered fondly.

After losing the opening set to Belton in one-sided fashion, Ellison faced a 15-5 deficit in the second set, but the Lady Eagles refused to fall.

And for Puni, it provides the memory she desired.

“This was my last home game as a senior,” Puni said, “and it is making me emotional just thinking about it, because I know I’ll never get to come back here again and play. That was it.

“So, I’m just very proud of my teammates for coming back and playing the way they did. I’ll be thinking about this game for a long time.”

Ellison produced the first point of the match before immediately falling into a 13-4 deficit, and it would never recover as Belton setter Kylie Blomquist assisted McKenzie Mansell for the set-clinching kill that punctuated a 4-0 outburst.

The Lady Tigers continued to control the contest by creating a 11-1 advantage in the second set, and they maintained the 10-point cushion at 15-5.

Behind Puni’s serving, the Lady Eagles tallied a dozen consecutive points to claw back into the set, and after Belton reclaimed a 20-17 lead, Ellison closed with a 9-4 run, thwarting a pair of set points in the process.

“We just had to push,” Lady Eagles sophomore middle hitter Iyahna Hibbler said. “(Ellison head coach Sarah Stolley) had already said everything she could say, and we were just losing our motivation.

“So, I decided I needed to get excited and start talking, and as soon as one person on our team is feeling it, then everybody comes along. It just snowballs.”

Ellison (19-15, 9-4) carried the momentum into the third set, reversing the roles on Belton by creating an immediate 9-1 lead. The Lady Tigers pulled within two points at 10-8 but could not get any closer despite a late surge to trim the deficit to 24-21.

The pendulum swung in the other direction, however, in the ensuing set as Belton (22-16, 10-3) cruised to victory following an 11-1 start, setting the stage for the Lady Eagles to rally once again.

The Lady Tigers fell into a 4-1 hole in the tiebreaker before responding with five consecutive points, but the narrow advantage did not hold.

The squads were tied at 7-7, 8-8 and 9-9 before Ellison embarked on its match-winning run.

“Nobody can take confidence from you,” Stolley said. “You give it away, and it was cool to see that kind of play out in tonight’s game.

“The kids understood the importance of this game and that pressure is a privilege.”

Coupled with Bryan’s victory against visiting Copperas Cove on Friday, the outcome clinches the district championship for the Lady Vikings (12-1) and drops Belton into a race with the Lady Bulldawgs (9-4) and Ellison for the second seed in the playoff field.

The Lady Eagles conclude the regular season by facing Killeen on Tuesday, while the Lady Tigers travel to Bryan and Copperas Cove plays Shoemaker.

Regardless of what happens, Puni believes Ellison will be ready.

“Not every team has the chemistry we do,” she said. “What we have is rare.

“It is not just one or two of us leading the way. We all want to achieve the same goals.”

Belton rallies in 2nd half to beat Ellison 22-12

Seth Morgan hauled in two touchdown grabs, and Belton’s defense shut out Ellison in the second half as the Tigers posted a 22-12 comeback win …