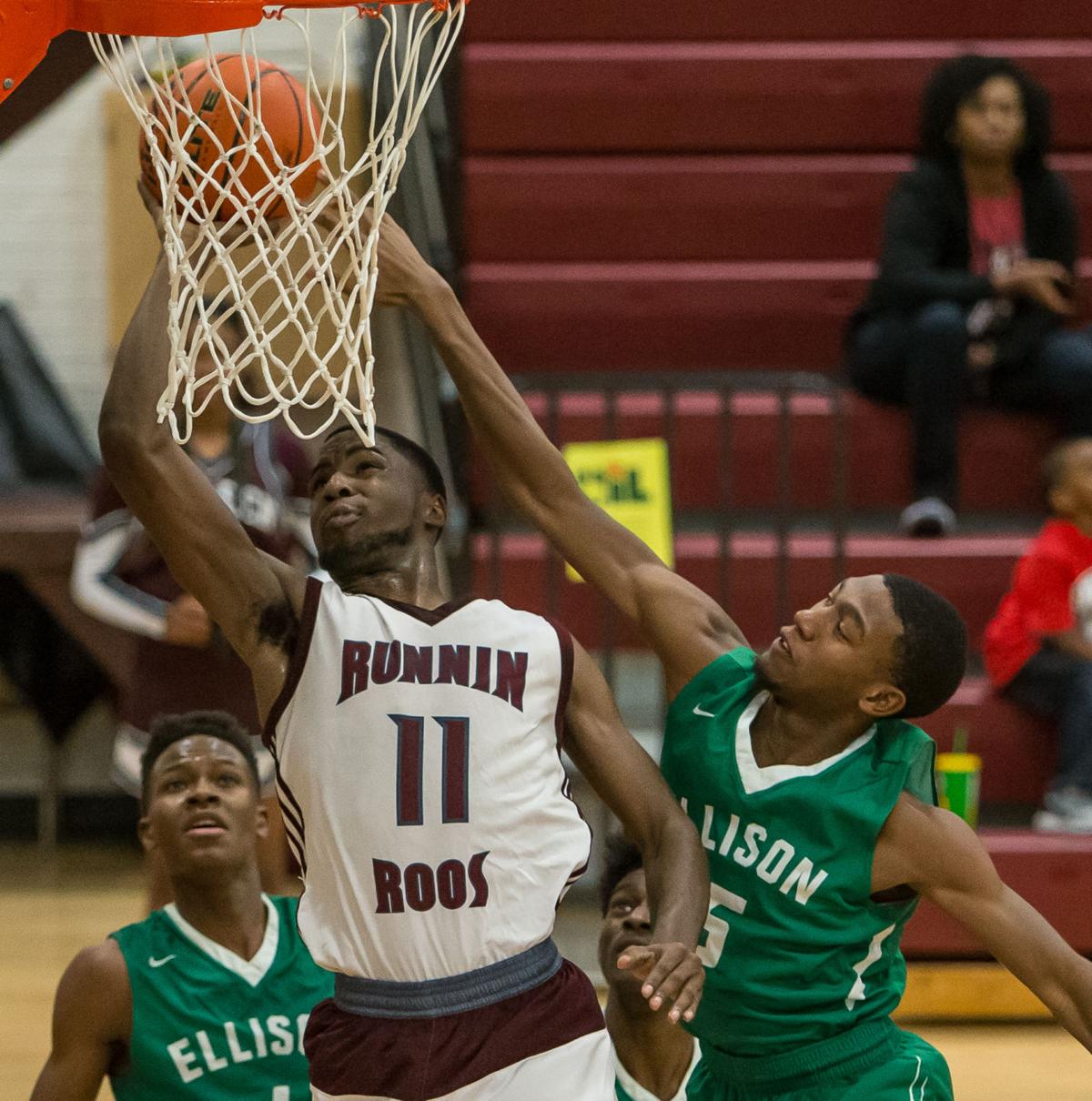 Killeen's Trayvon Todd (11) goes up for a shot as Ellison's Shamon Walker tries to block it Friday at Killeen High. Ellison won 63-52. 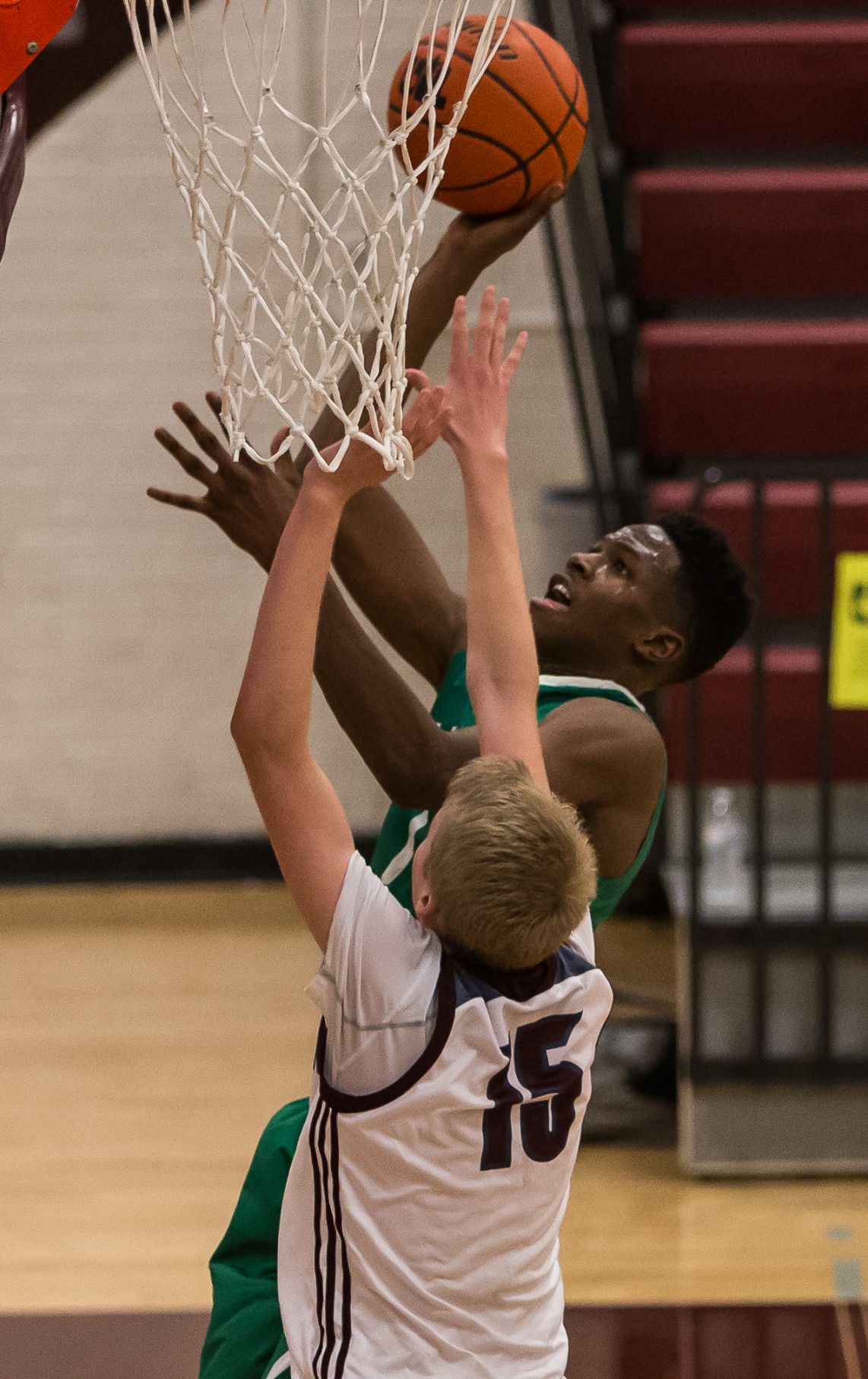 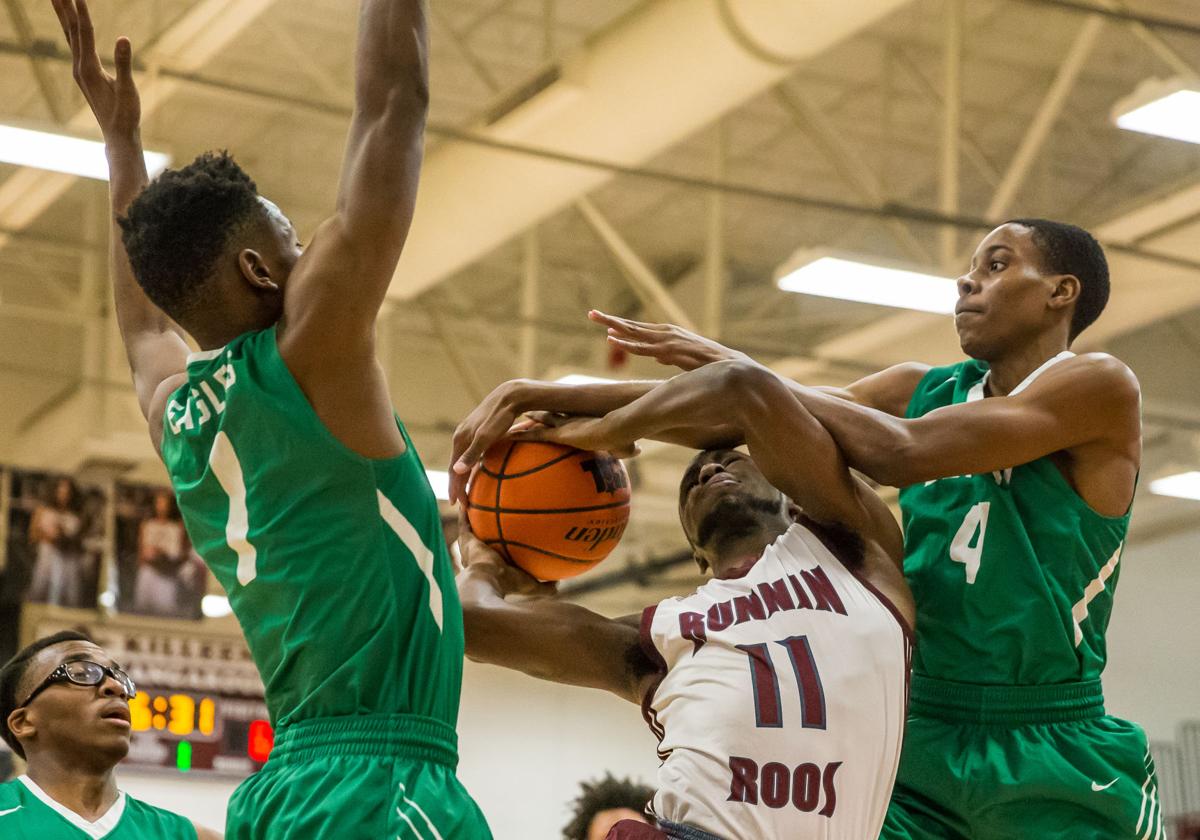 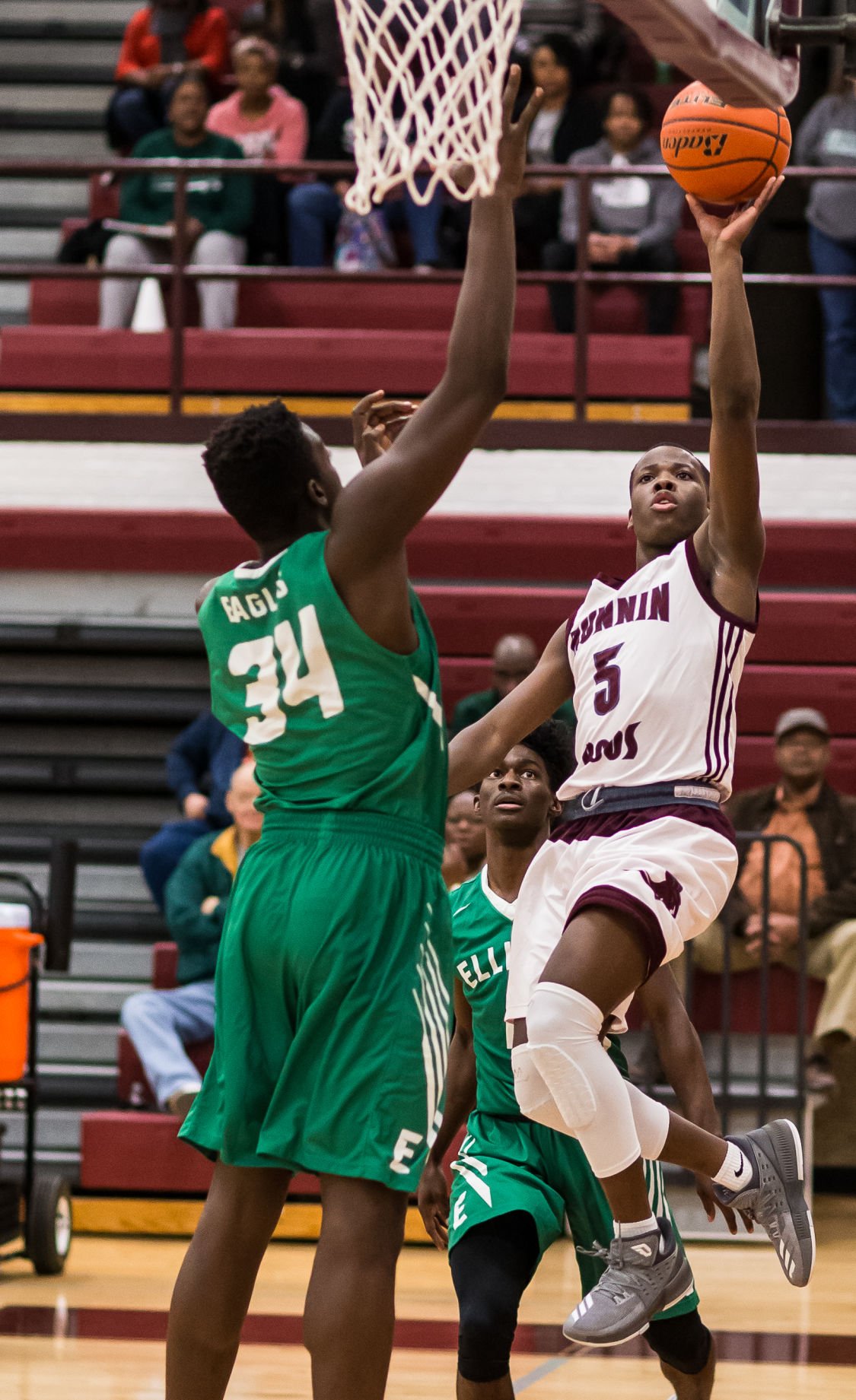 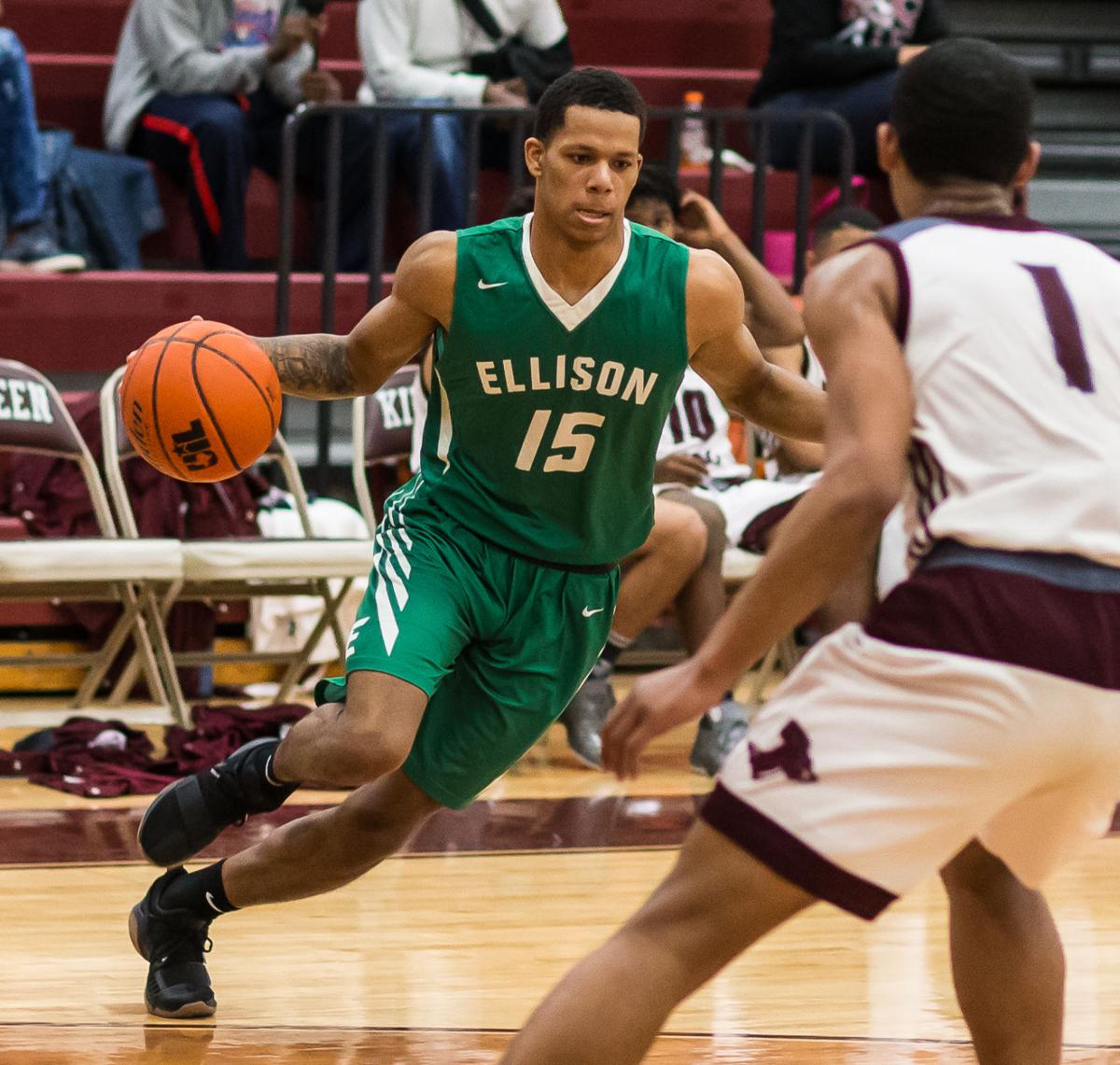 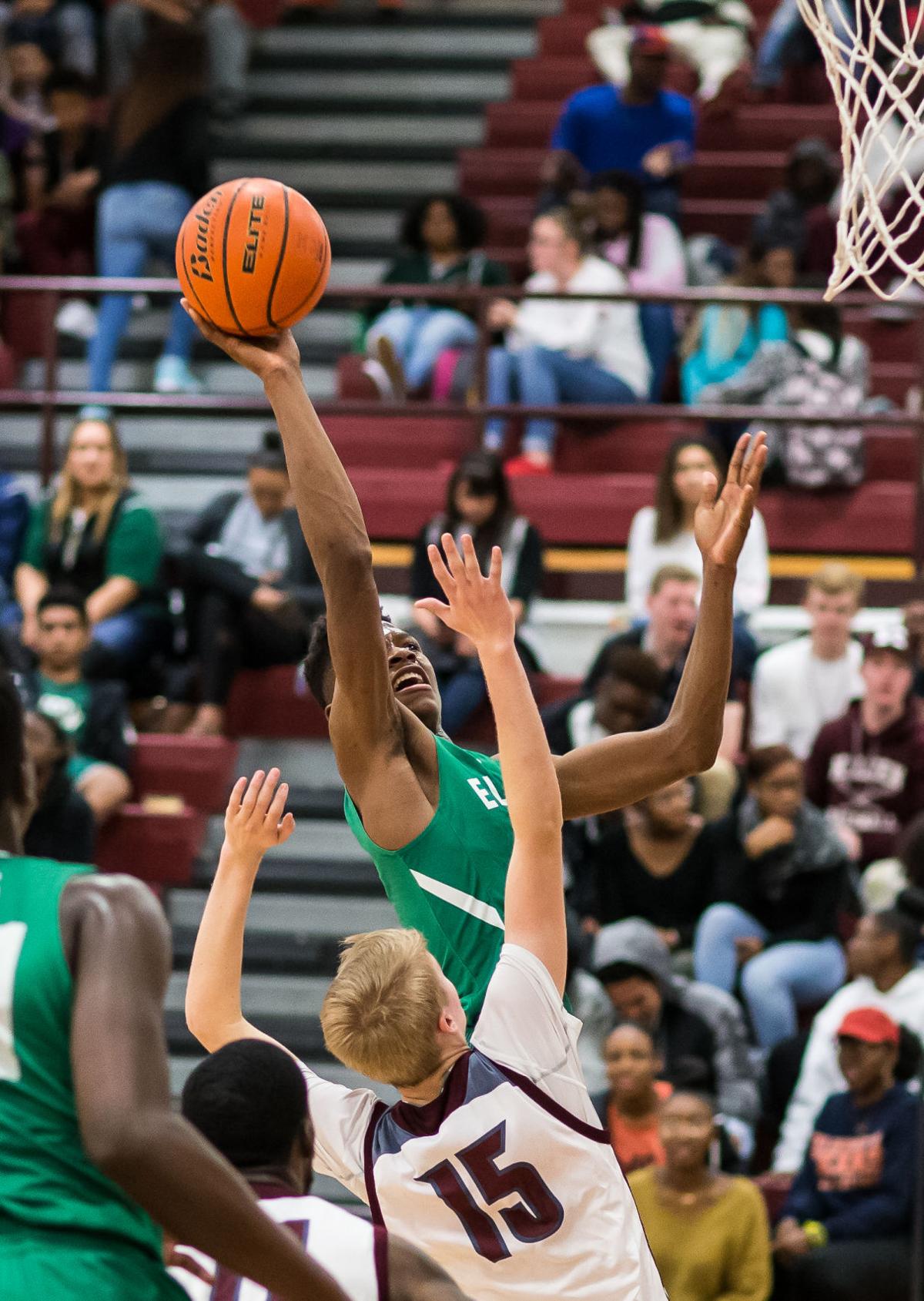 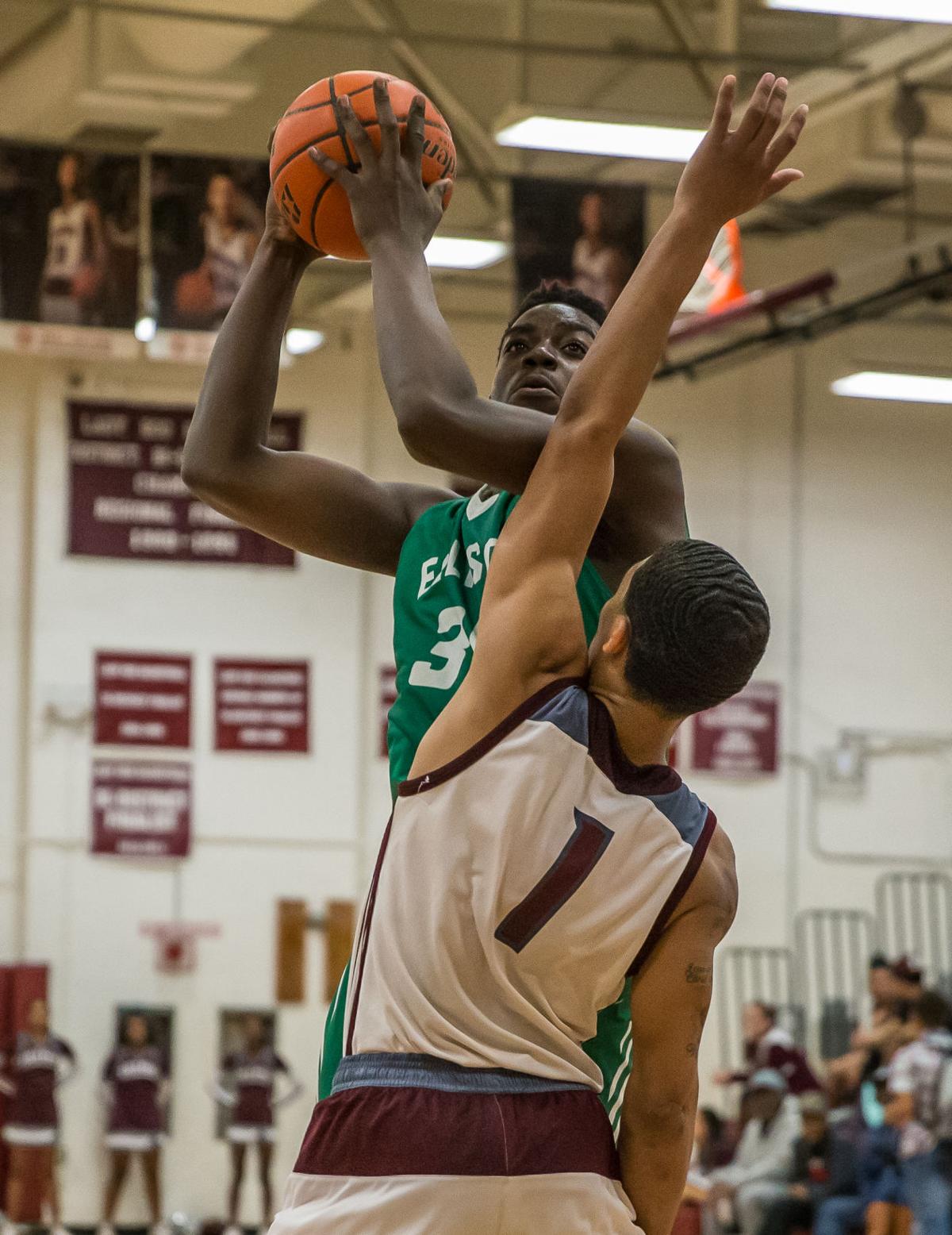 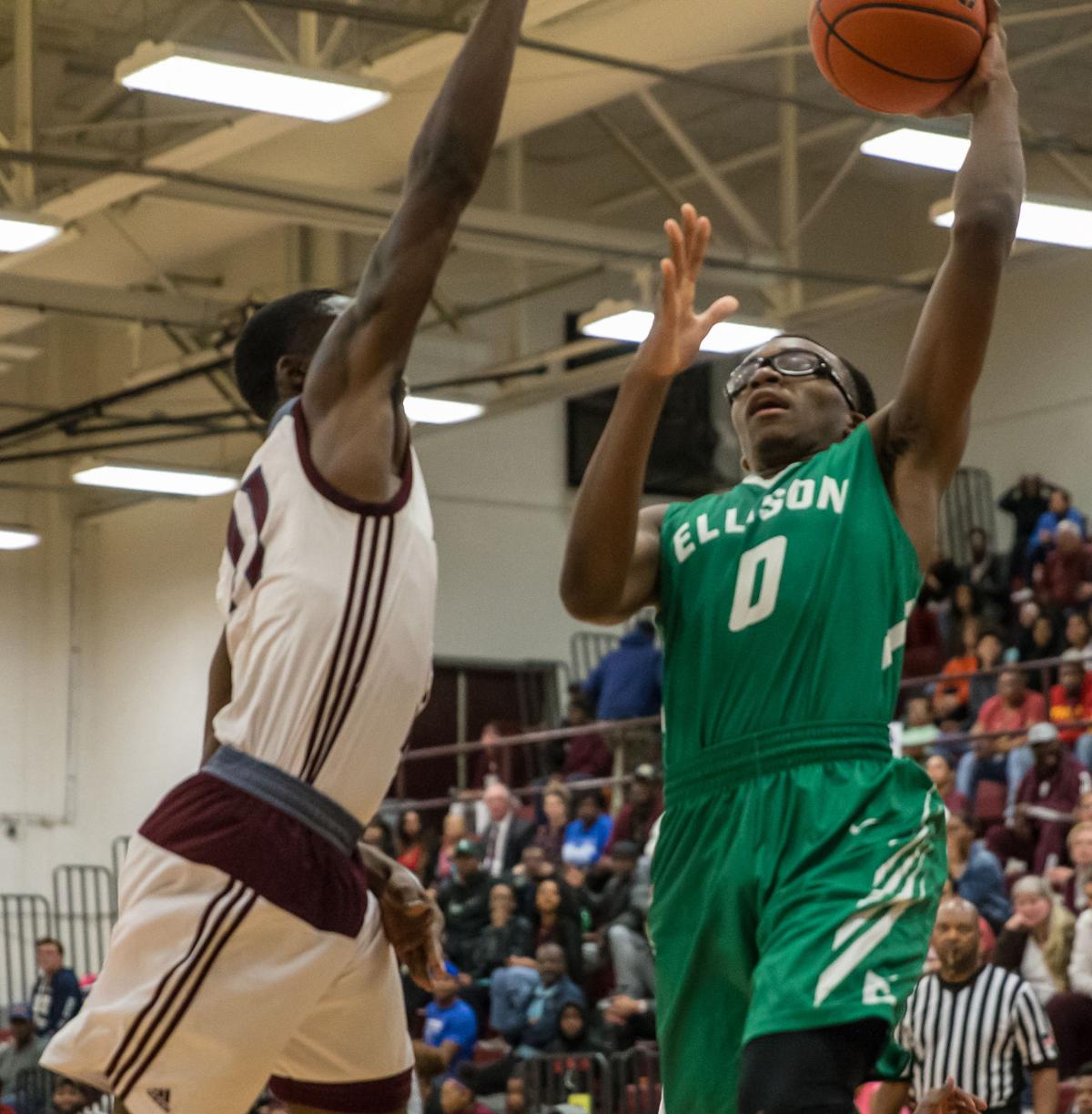 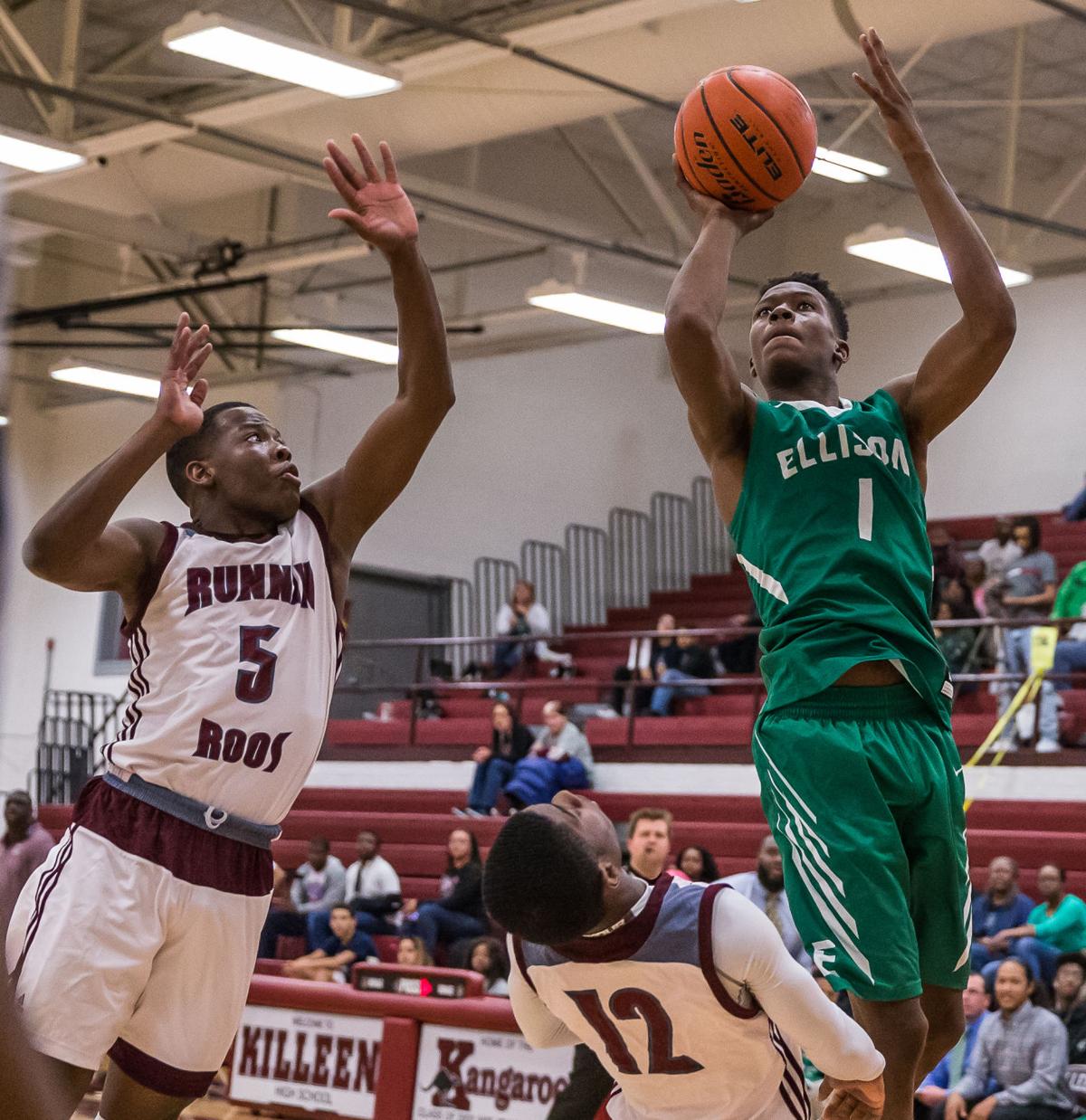 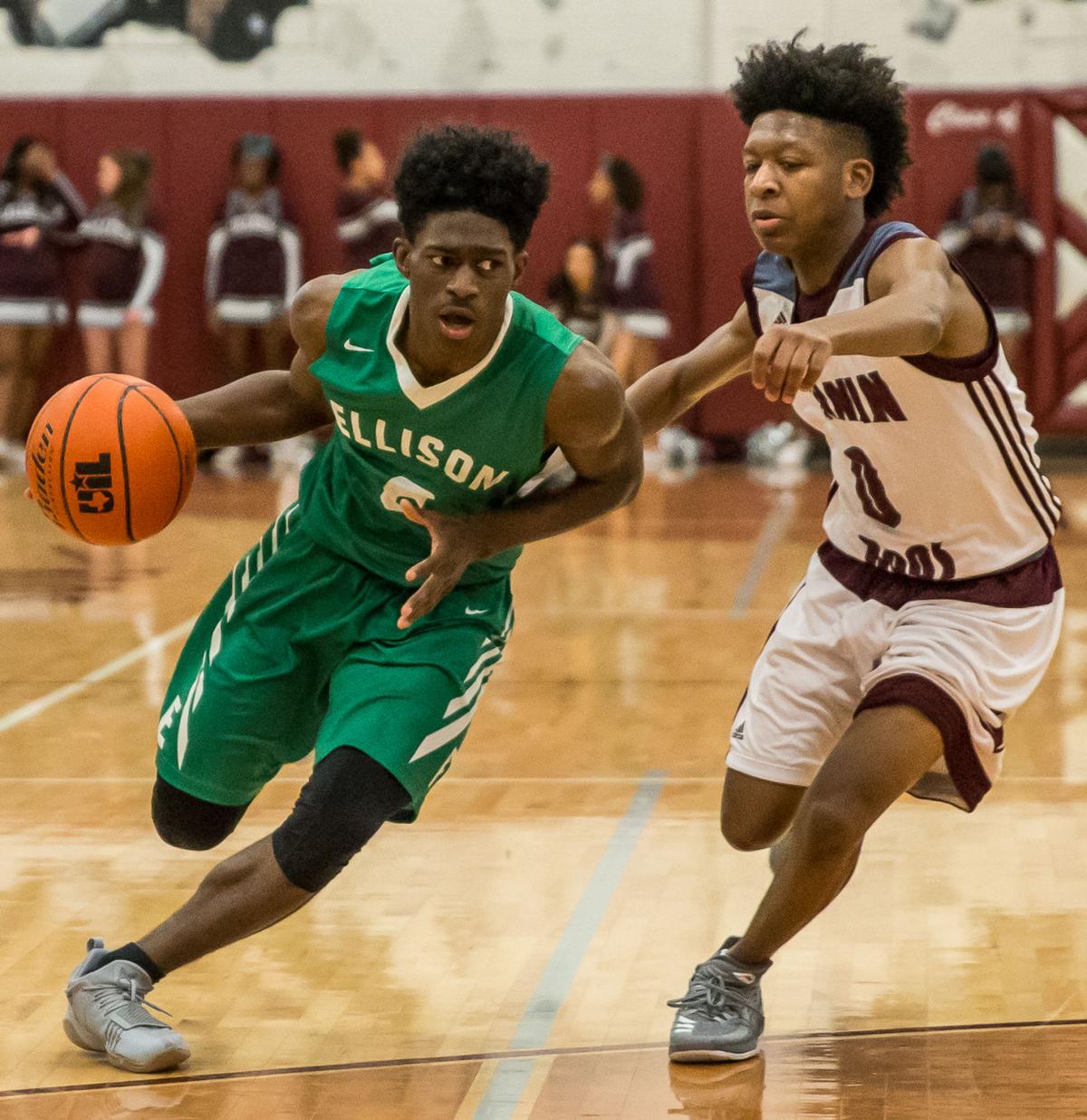 Killeen's Trayvon Todd (11) goes up for a shot as Ellison's Shamon Walker tries to block it Friday at Killeen High. Ellison won 63-52.

Casey Armour scored 13 points and the Ellison Eagles clinched a playoff spot Friday with a 63-52 win over Killeen.

D’marcus Leach added 11 points, and Marvin Caines 10 as the Eagles swept the season series against the Kangaroos.

The Eagles also remained on the heels of league leader Waco Midway for the district championship. Ellison is one game behind with three to play.

The Eagles came out strong with a 10-0 run over Killeen in the first three minutes of the game with eight points coming from senior guard Leach.

Killeen cut Ellison’s lead in half after junior forward Jackson Taylor found junior guard Cortez Ivie waiting on the outside for a deep 3-pointer. The Eagles led 20-10 after the end of the period.

The Roos stayed within 10 points of Ellison throughout the second quarter and held the Eagles to nine points in the period.

Late in the quarter, Taylor collided with three Ellison players and landed on his back, where he stayed for about 30 seconds before getting up. Referees had him checked before re-entering the game.

Only 22 seconds later, a foul was called on Ivie for holding Green, but in the backcourt senior guard Montego Muckelvaney was on the floor grabbing his left ankle.

Muckelvaney was helped off the court and examined by the athletic trainer.

Taylor, who subbed back in for the injured Muckelvaney after being cleared to return, drew a charging foul on Green and brought the Roos within six before trailing 29-21 at the half.

Muckelvaney was examined and had his foot wrapped by the athletic trainer but did not return.

Ellison started the second half with a steal but quickly turned over the ball when senior guard Casey Armour dribbled up the sideline and stepped out of bounds.

Green was sent to the line after being fouled by junior guard Willie McGee. Green missed the first shot but sank the second.

McGee inbound the ball to sophomore guard Michael House, who passed down the court to Travon Todd for a dunk, sending Killeen on a 13-5 run to bring the Roos within two points and causing the Eagles to call timeout.

Ivie attempted to catch up the Roos with a 3-point play but it wasn’t enough as the Eagles led 45-38 going into the fourth quarter.

Bryant continued to push Ellison ahead with a right hook shot but later was called on his second offensive foul of the game.

McGee brought Killeen within four with a right hook off of an assist from Taylor and added another two points before Ellison used another timeout.

Armour sealed Ellison’s playoff clincher with a dunk in the last seconds of the game.

“So, they know that we have three tough games and we’ve got to win all three of them.”

And while every game still counts when you’re chasing the district title, Leach said the team has its eyes set on one team in particular, “I wouldn’t say worried about, but I’d say look out for Midway.”

Killeen (11-14, 5-6) remains in the playoff hunt, but dropped into a fifth-place tie with Harker Heights.

“They’re motivated,” Killeen coach Reggie Huggins said of his players. “They know they can play with anybody, they’ve just got to go out and do it.”

In their post-game ritual of meeting at midcourt, Huggins and the Roos huddled at half court where they let their coach know that they’re not counting themselves out just yet.

“They played hard tonight,” he added. “But we still control our destiny, so it’s up to us, and they said they’re ready to do it.”

Ivie led the Roos with 17 points. Todd and House each had 10.

“All my coaches, we ask them to do things and they do it,” Huggins said. “This is the plan we came up with and unfortunately we didn’t win, but our guys did what we needed them to do and as long as we do that, we’re OK.”

COPPERAS COVE — Eldridge McAdams was not sure what to expect.