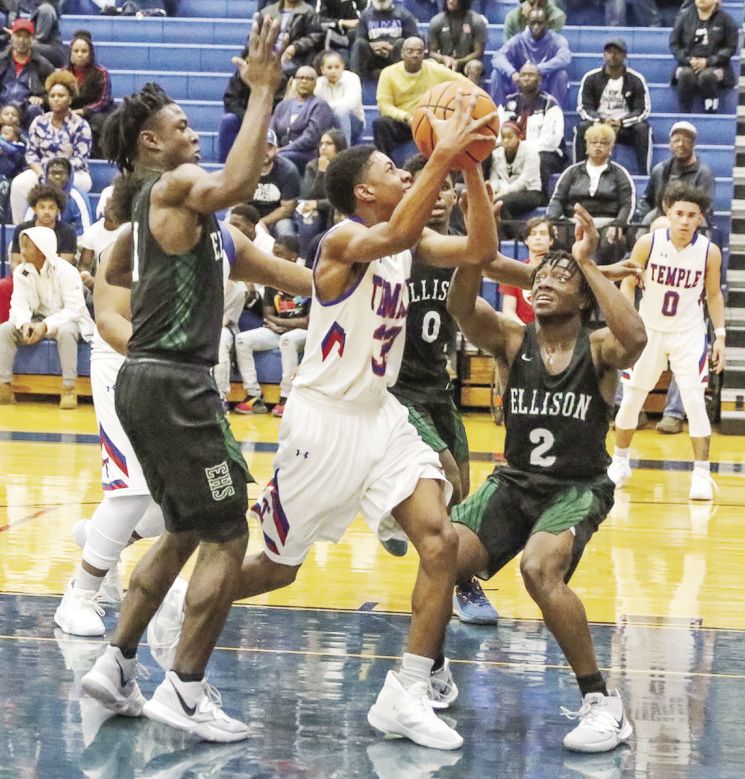 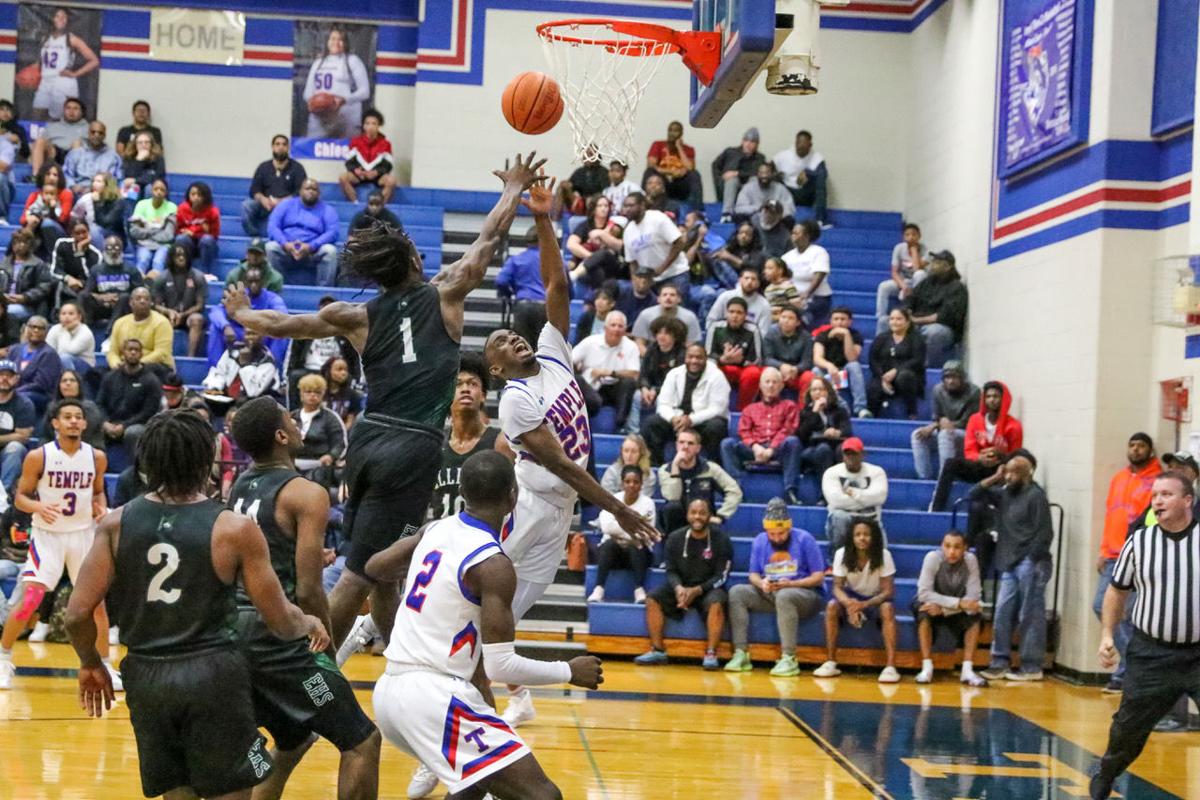 Temple's Elcid Smith (23) drives to the basket past Ellison's Jamyron Keller (1) on Tuesday in Temple. 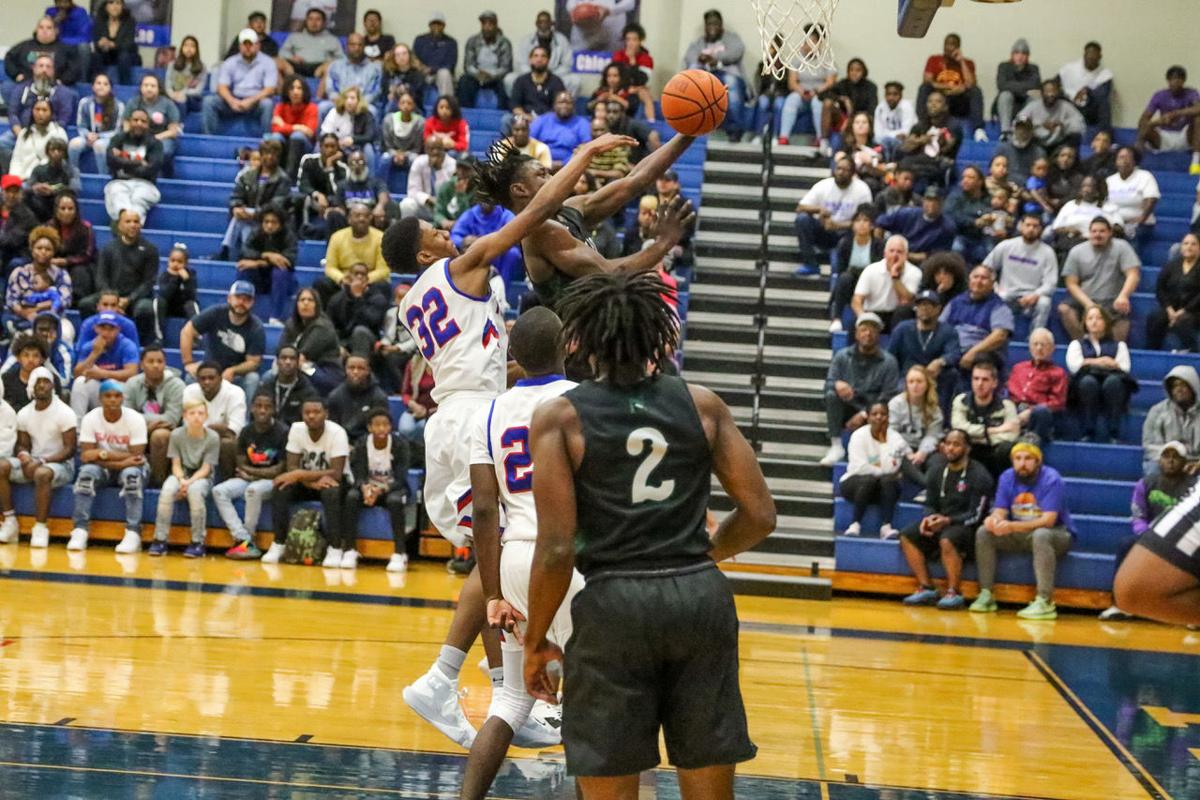 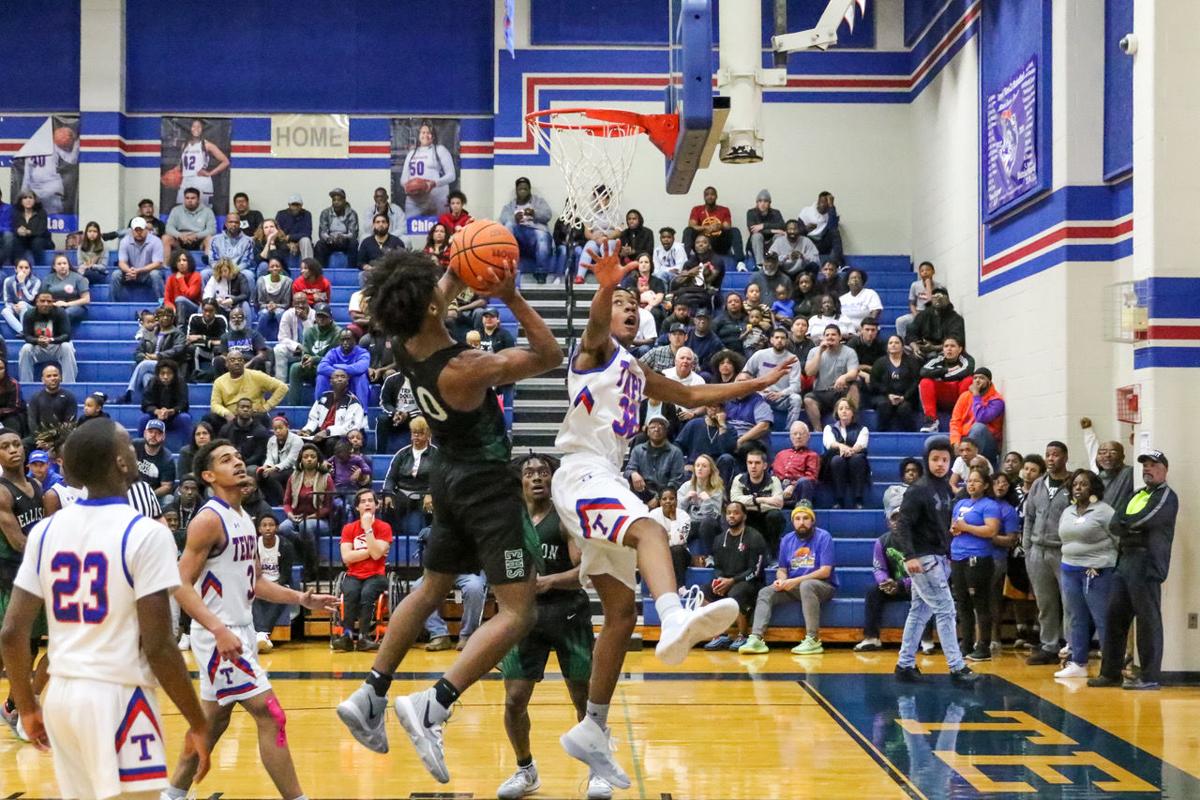 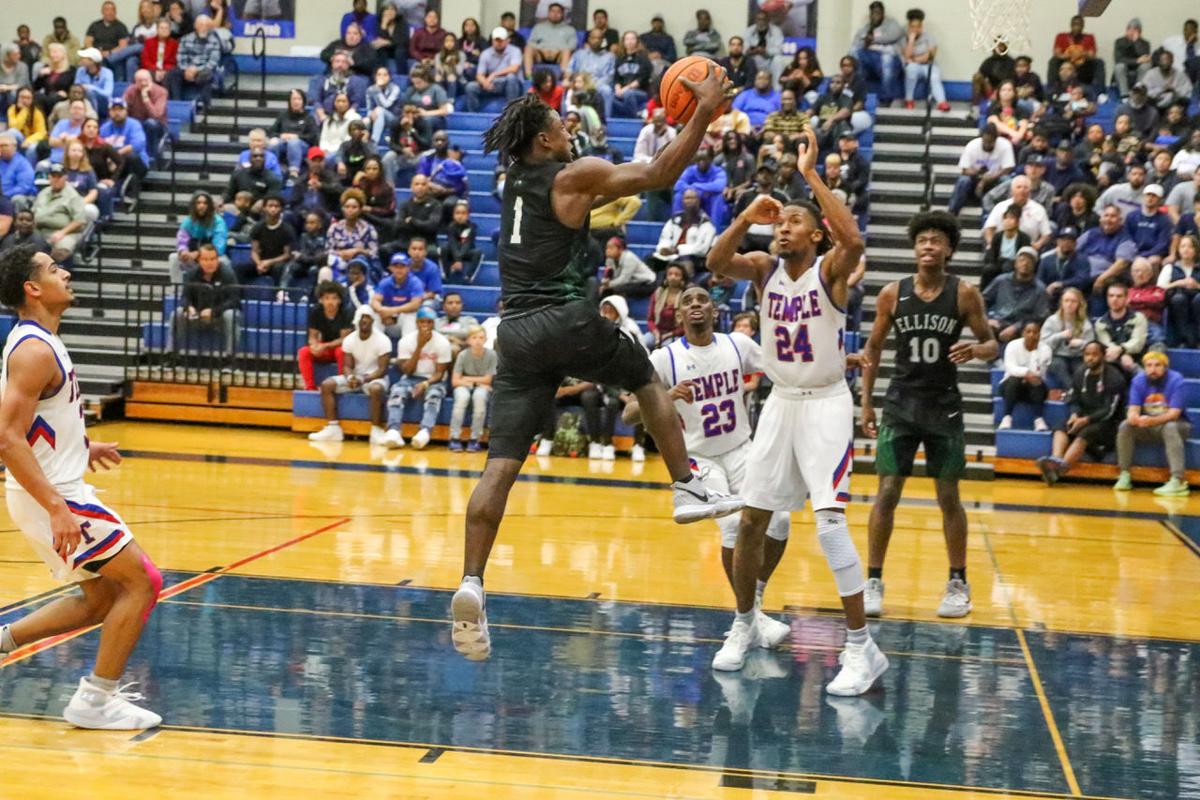 Ellison's Jamyron Keller (1) drives to the basket for a layup as Quentin Johnston defends on Tuesday in Temple. 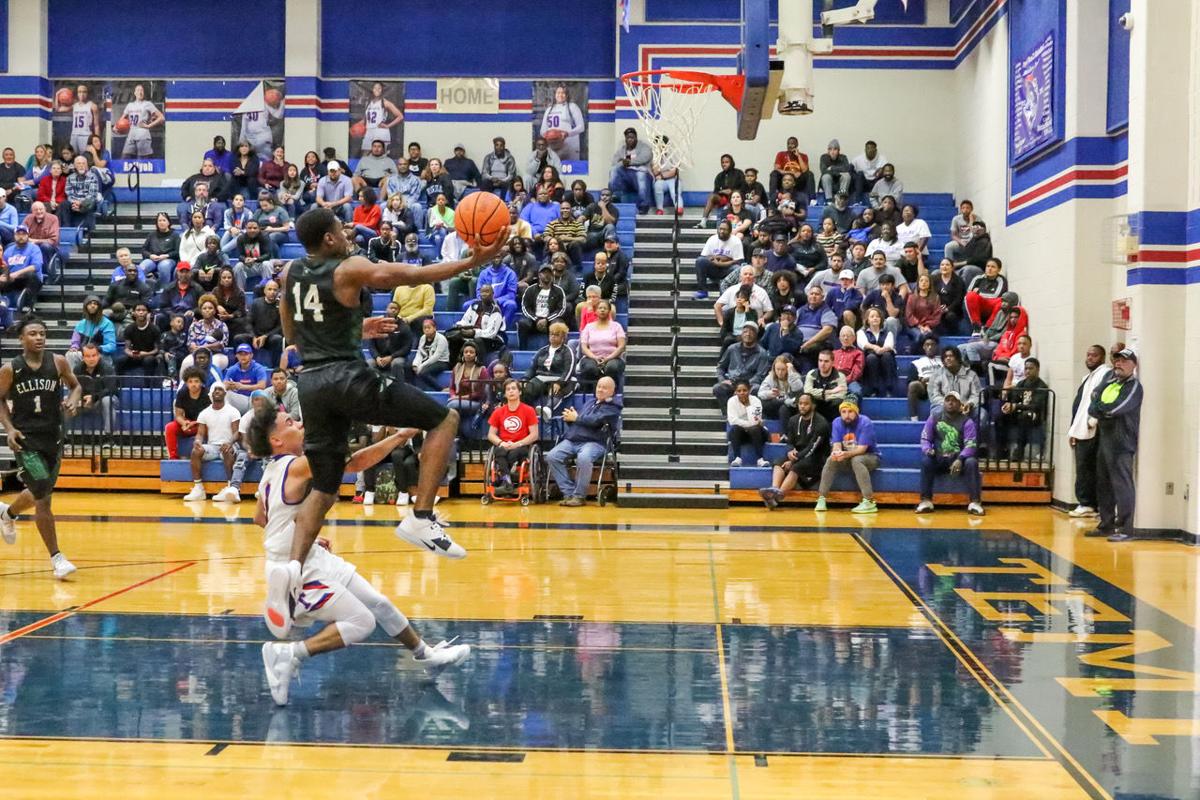 Ellison's Trendon Stewart (14) drives to the basket for a layup over Temple's Jadon Garcia on Tuesday in Temple.

Temple's Elcid Smith (23) drives to the basket past Ellison's Jamyron Keller (1) on Tuesday in Temple.

Ellison's Jamyron Keller (1) drives to the basket for a layup as Quentin Johnston defends on Tuesday in Temple.

Ellison's Trendon Stewart (14) drives to the basket for a layup over Temple's Jadon Garcia on Tuesday in Temple.

TEMPLE — Despite dispatching their first two District 12-6A opponents by an average of 24 points, the Temple Wildcats got a first-hand lesson Tuesday on what it takes to be an upper-echelon program in their league.

They also fully understand the amount of work remaining to reach their year-end goal.

Temple fell behind 14-2 after the first quarter as Ellison combined its up-tempo offense and full-court press effectively from start to finish for a 68-48 win at Wildcat Gym in a New Year’s Eve early afternoon district contest.

The Eagles held Temple to 31 percent (17 of 55) shooting for the game and forced 18 turnovers, 11 of which came before halftime. The 48 points were also the second-lowest scoring output of the season for the Wildcats.

“That’s the team that everybody in our district is chasing, so we got to increase our intensity level,” said second-year Temple head coach Michael Thomas, whose team has lost three of four after starting the season with 14 straight victories. “We showed flashes of being able to play with them. But it’s like I told the guys ‘You can’t go through the motions.’ Sometimes when you’re winning, everybody is feeling good, but sometimes you need these kinds of losses to help bring you back to reality.”

Ellison (19-4, 4-0) wasted no time in giving Temple that strong dose of reality. The Eagles jumped out to an 8-0 lead after a fast break layup by Nehemiah Nuckolls before the Wildcats (15-3, 2-1) scored their first points of the game on a goaltending call with 3 minutes left in the opening frame.

Temple’s offensive production picked up in the second quarter, but so did Ellison’s. J’Don Garcia and Elcid Smith made 3-pointers and Smith followed that with a layup for Temple to make it 18-10 in favor of the visitors with just more than 6 minutes left before the break. Ellison responded with an 11-5 run to end the first half, fueled in part by a Jayce Wright layup, a corner 3-pointer by Matthias Nero and a three-point play by Nero that sent Temple into halftime trailing 31-15.

“I thought we played pretty well defensively the first three quarters,” said Ellison head coach Alberto Jones Jr. “We knew that Temple has a real good team this year. We knew (Quentin Johnston) is extremely athletic and we know about (Jaden Pate) and (Smith). We tried to take away some of the things they like to do, but ultimately, we just had to focus on us and do what we got to do. If this group we have plays like they’re supposed to, we’re going to be hard to beat.”

Johnston — a regular double-digit scorer for Temple — finished with four points and didn’t record his first basket until the midway mark of the fourth quarter. Smith led Temple with 13 points while going 3-for-8 from the 3-point arc. Pate added 12 points, eight of which came over the final 8 minutes. Joseph Stewart chipped in seven points off the bench, while Garcia and Rico Troup tallied six points apiece.

Temple failed to make up any ground in the third quarter as both sides finished with 16 points in the period. Smith made a 3-pointer with 4:55 left in the third to make it 37-20, but the Eagles quickly upped their lead to 20 at 45-25 with 2 minutes remaining after a pair of free throw makes by Nuckolls, who had a game-high 20 points on 7-of-13 shooting.

12-6A play resumes today with some big matchups

The District 12-6A basketball schedules resume today, and now, there will be no interruptions until a champion is crowned.