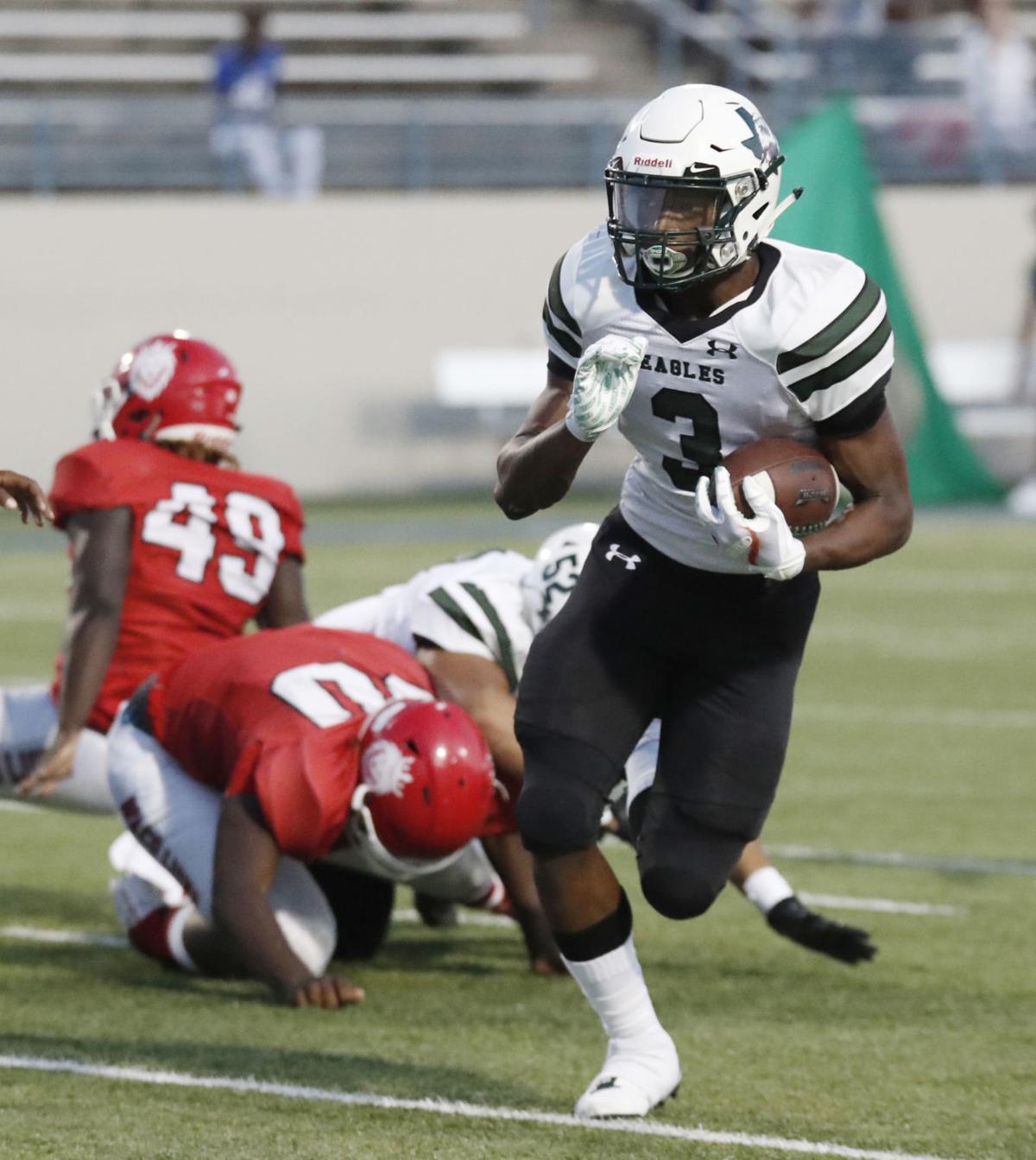 Ellison’s Damashja Harris (3) escapes from the Waco High defense for a big gain in the first half Friday night in Waco. 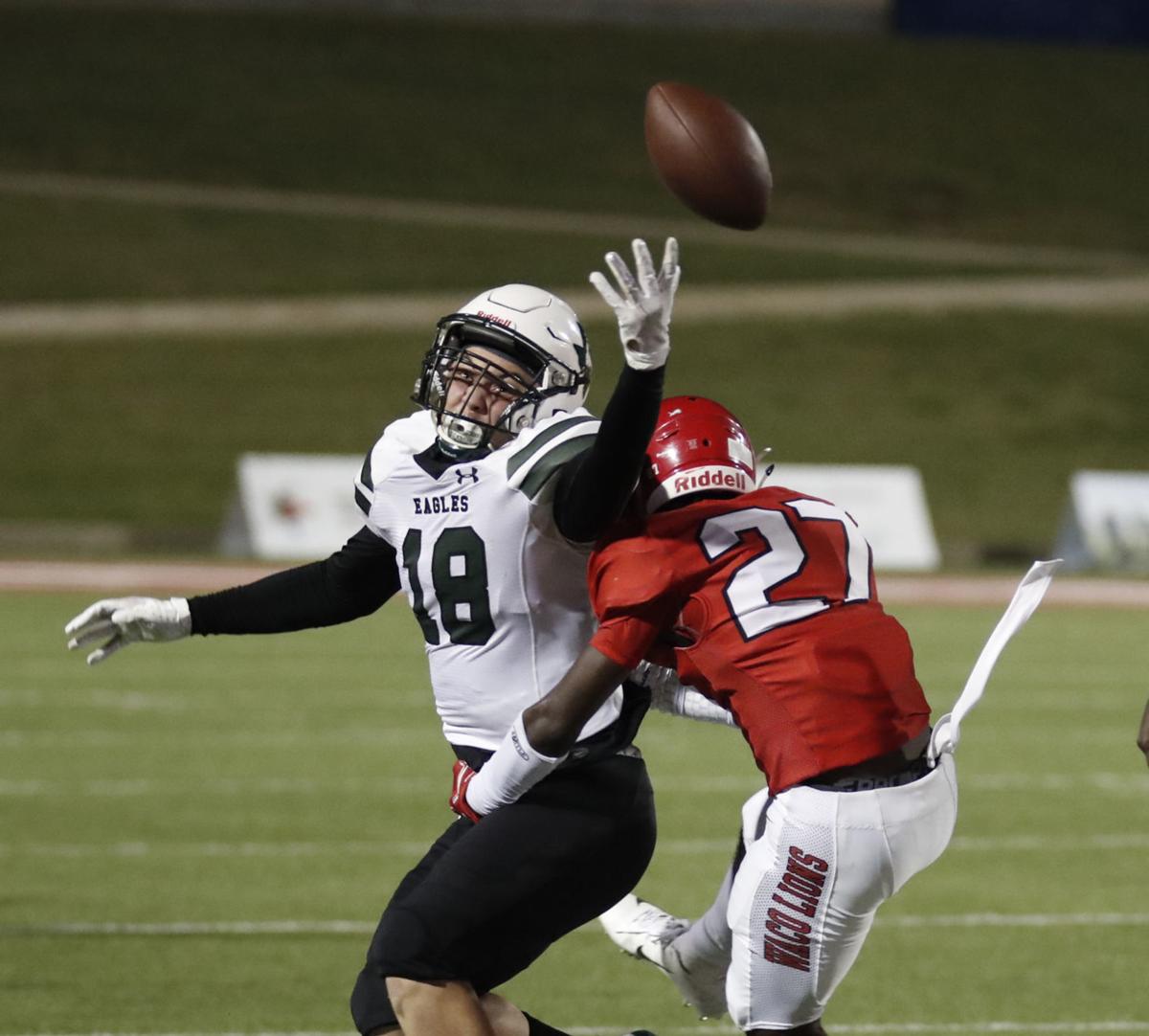 Waco High's James Thompson, right, breaks up a pass, intended for Ellison's Christopher Uresti during the first half Friday at Waco ISD Stadium. 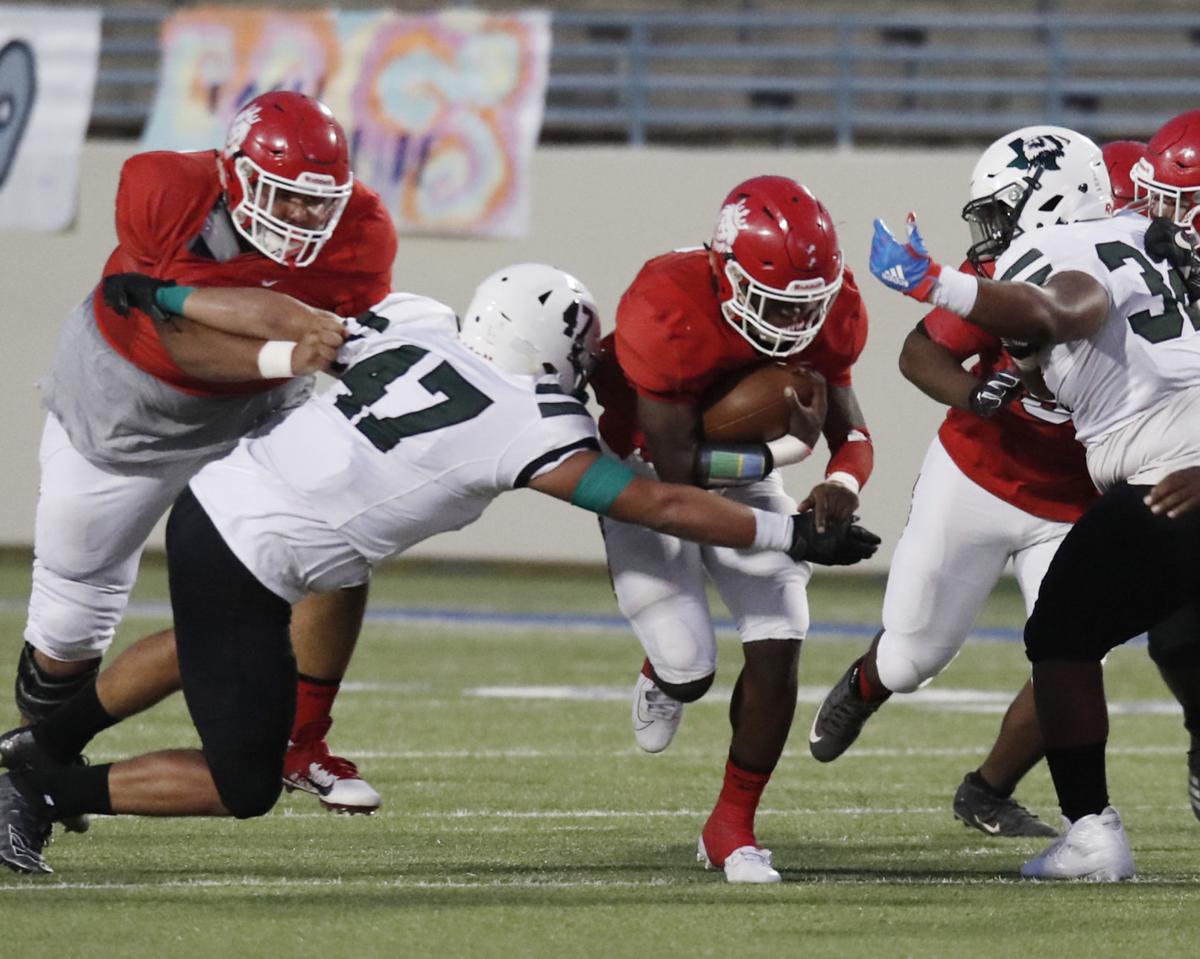 Ellison’s Damashja Harris (3) escapes from the Waco High defense for a big gain in the first half Friday night in Waco.

Waco High's James Thompson, right, breaks up a pass, intended for Ellison's Christopher Uresti during the first half Friday at Waco ISD Stadium.

But Spiller came up big when the Eagles needed him the most.

Spiller broke loose for a 51-yard touchdown run early in the third quarter before throwing a 34-yard scoring pass to Trejon Spiller midway through the fourth quarter that sealed the Eagles’ 16-0 win.

Following last week’s 35-7 loss to Georgetown, the Lions (0-3) had difficulty finding any consistent offense again as they finished with just 143 yards. “My team played hard, but we were just a little anemic on offense, and we’ve got to fix that,” said Waco High coach Kwame Cavil. “We’ve got a bye week to lick our wounds and figure this thing out. Right now there are a whole lot of questions we’ve got to get answered.”

Spiller hit seven of 13 passes for 106 yards and rushed for 71 yards on 11 carries as the Eagles won their first game after opening with two losses. With Ezekiel Sheridan rushing for 98 yards, the Eagles had a lot of success on the ground as they amassed 264 yards. But three turnovers cost them more scoring opportunities and gave the Lions a chance.

“We had some guys down and some guys stepped up,” Cavil said. “Our defense is giving the offense a chance. We’re trying to play complimentary football, and we will. We’ve got to coach them up to get them more consistent and get them in the best position to succeed, and get them in some things they’re comfortable doing.”

After LaCharles Sapp’s first-quarter field goal gave the Eagles a 3-0 lead, Spiller put a charge in Ellison’s offense when he broke up the middle for a 51-yard touchdown on the fourth play of the third quarter.

“He’s a great player and all he needed was a chance,” Cavil said.

Trailing 9-0, the Lions had a chance to cut into Ellison’s lead when Jamez Thompson recovered Santos Lacewell’s fumble at the Eagles’ 20 late in the third quarter. Following Adrian Rodriguez’s 9-yard run, he tried to get a first down on the next play but was buried for a 1-yard loss back to the 12. Omar Espinoza’s 29-yard field goal attempt sailed left.

The Eagles put the game away when Breezion Spiller hit Trejon Spiller with a perfect pass over the middle for a 34-yard touchdown to open up a 16-0 lead with 6:13 remaining. The Lions had a chance to score in the final minutes after Dai’Shawn Fisher recovered Breezion Spiller’s fumble at the Ellison 27.

But after Jerome Ratliff picked up 15 yards for a first down at the 3, the Lions couldn’t punch it across. Ellison’s Daylan Littlejohn nailed Rodriguez for a 1-yard loss on fourth-and-goal at the 2.

The closest either team came to scoring a touchdown in the first half came on Ellison’s first drive as it moved 63 yards to the Lions’ 7. Facing fourth-and-1, Sheridan exploded around the left side for the 7-yard touchdown, but the Eagles were called for holding. Sapp drilled a 33-yard field goal to give the Eagles a 3-0 lead with 6:29 left in the first quarter.

Early in the second quarter, Waco High’s Jaelyn Rhynes intercepted Spiller’s long pass at the Lions’ 30. After the Lions couldn’t move, the Eagles drove to Waco High’s 33. But on third-and-1, Sammy Johnson nailed Spiller for a 2-yard loss. Sheridan drove for 2 yards on fourth down, but couldn’t get the first down as Waco High gained possession with the second quarter clock winding down.