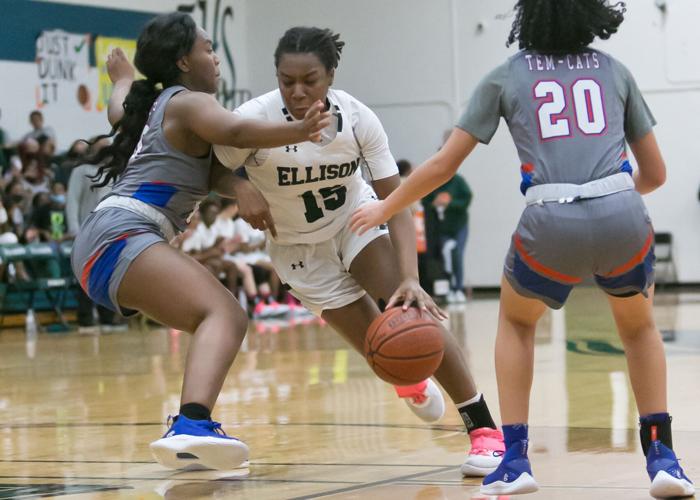 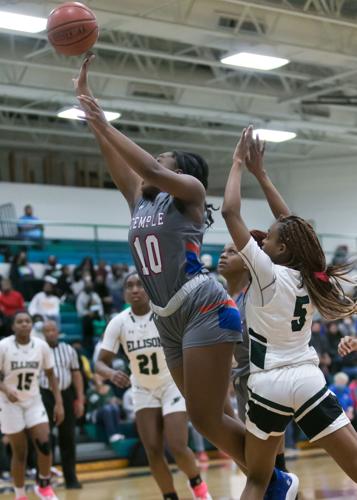 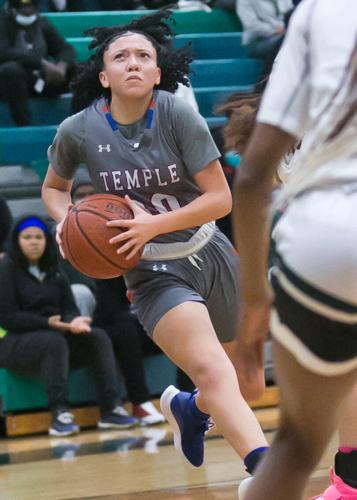 Temple's Aaliyah Thomas (20) dribbles into the paint for a shot against Ellison on Friday at Ellison High School. 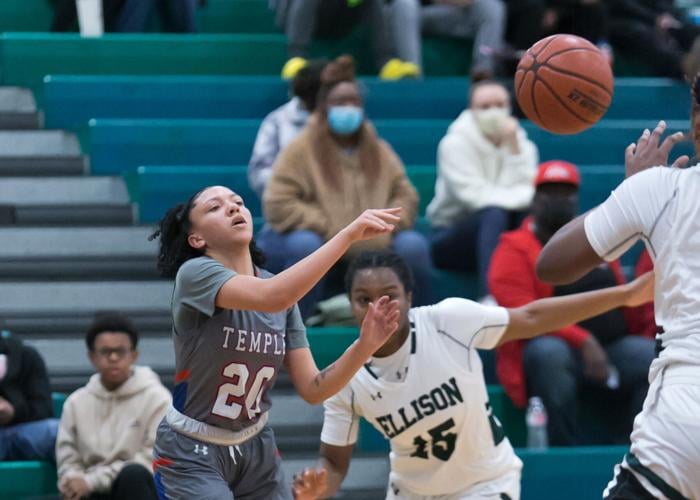 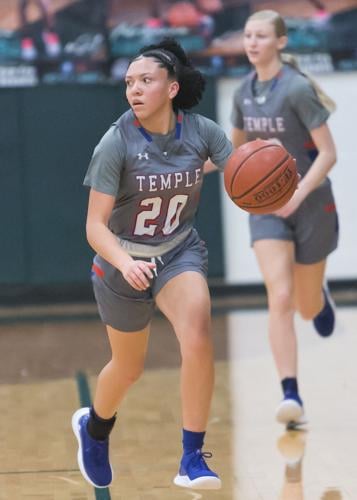 Temple's Aaliyah Thomas (20) dribbles the ball down the court against Ellison on Friday at Ellison High School. 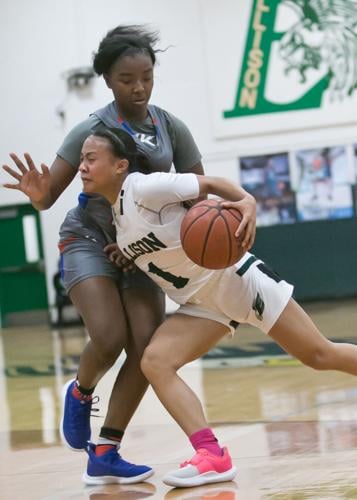 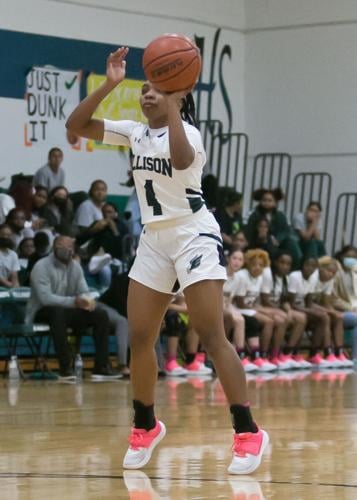 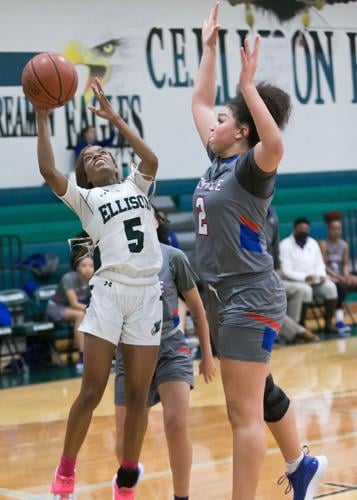 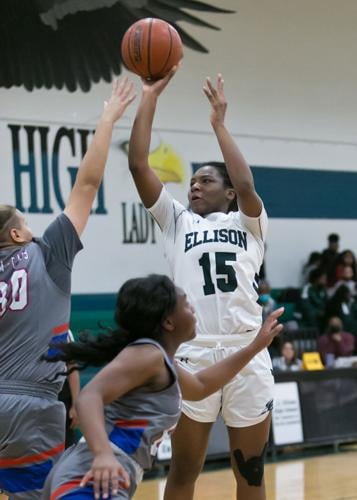 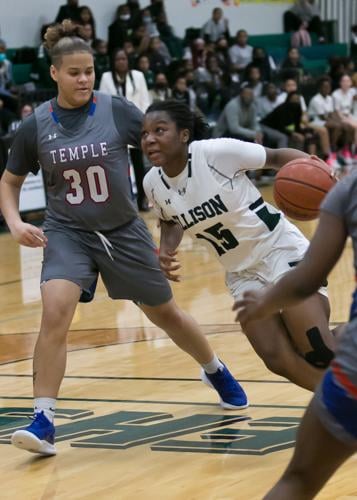 Ellison's Allison Owens (15) drives to the basket and is defended by Temple's Jasmine Calvery (30) on Friday at Ellison High School. 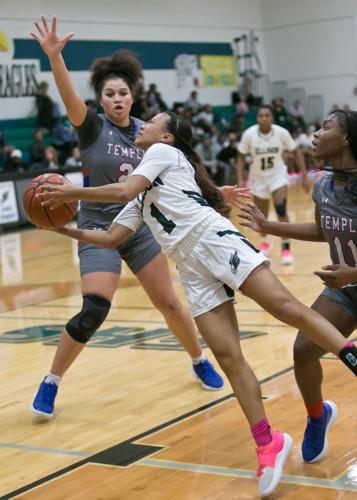 Ellison's Evelyn Lorenzo (1) drives to the basket and is fouled by Temple's Rene'jah Jackson (11) on Friday at Ellison High School.

Temple's Aaliyah Thomas (20) dribbles into the paint for a shot against Ellison on Friday at Ellison High School.

Temple's Aaliyah Thomas (20) dribbles the ball down the court against Ellison on Friday at Ellison High School.

Ellison's Allison Owens (15) drives to the basket and is defended by Temple's Jasmine Calvery (30) on Friday at Ellison High School.

Ellison's Evelyn Lorenzo (1) drives to the basket and is fouled by Temple's Rene'jah Jackson (11) on Friday at Ellison High School.

The Ellison Lady Eagles picked up a crucial win Friday at home against Temple, riding three big quarters and some tough defense to a 43-31 win.

Ellison’s victory did two things. First, it kept the team at 7-2 in District 12-6A, keeping pace with the Harker Heights Lady Knights as the two jockey for the district lead. As such, the teams are tied for the lead.

Second, the Lady Eagles avenged a Dec. 14 loss to the Tem-Cats.

Since the game was crucial to both squads, Ellison head coach Sherry McKinnon said she leaned on her experienced starters of Evelyn Lorenzo, Kaylah Cherry, Kera Harvey, Allison Owens and Kira Bass.

“I just thought the experience of those ladies that I needed them on the court, and they dug deep,” McKinnon said after the game.

McKinnon said she substituted players in the second quarter, but that was it.

The experienced leaders fed off of each other in the fourth quarter, distancing themselves from the Tem-Cats, who were looking to snatch momentum back.

Down 27-17 with a couple seconds left in the third, Temple’s Nyteria Colbert found an open Aaliyah Thomas in the corner for a buzzer-beating 3 to cut the lead to seven.

In the fourth quarter, however, Bass was having none of it. Positioning herself under the basket, she grabbed an Ellison miss and went back up with it. It took a couple tries, but eventually, she got the ball in the hoop to give Ellison a 29-20 lead. It was the last time the Tem-Cats were within single digits.

From there, Lorenzo, who led all scorers with 16, scored six straight points for the Lady Eagles, increasing the lead to 35-21, with just a Colbert free throw in the mix.

Defensively, the Lady Eagles played a tough brand of zone defense for much of the game, forcing several Tem-Cat turnovers.

The post duo of Owens and Bass also produced a handful of blocked shots, one so emphatically that the thud of the ball hitting Bass’ hand could be heard in the top section of the bleachers. Though the Lady Eagles could not capitalize on the first-quarter rejection, it still sent the crowd into a frenzy.

“I thought they played really well and together as a team,” McKinnon said. “It was just the whole team effort.

“... Definitely on the defensive side of the ball; I thought we did a great job of that.”

The game was not free of adversity for the Lady Eagles, however, as the Tem-Cats quickly dissolved an 11-2 deficit in the second quarter.

Thomas found the net twice with 3-pointers, and Aniah Hall put back a Temple miss and converted the and-one midway through the quarter.

Thomas later hit one of two free throws toward the end of the quarter to tie the game 15-15. Lorenzo’s heave from beyond half court fell well short, and the game was tied at the half.

“I don’t know if (it was) our legs or, you know, getting comfortable with the way we played in the first quarter,” McKinnon said of the second-quarter drought that produced only four points and yielded 13.

“Not taking away from Temple, I think they made some adjustments and got some shots there,” McKinnon said.

It was the opening stretch of the third quarter that proved pivotal in the game.

With the score tied at 15, the Lady Eagles went on a 10-0 run, opening a 25-15 lead before a layup from Colbert briefly quelled the fire.

During the 10-0 stretch, the Lady Eagles got points from Owens and Bass, with Owens pacing the run with eight points.

Overall, Owens scored in double figures with 11 points. Bass totaled six points, while Cherry and Harvey each got four. Asia Zachary added a bucket in the second quarter for two points.

The Tem-Cats had five players on the point ledger.

Colbert led the way with 10 points, followed by Thomas with nine points, Hall with five, Khia Kirkwood with four and Allison Vaden with three.

The Lady Eagles head to the road Tuesday night for a 7 p.m. matchup with Shoemaker.

Tonight has the potential to be a changing of the guards.