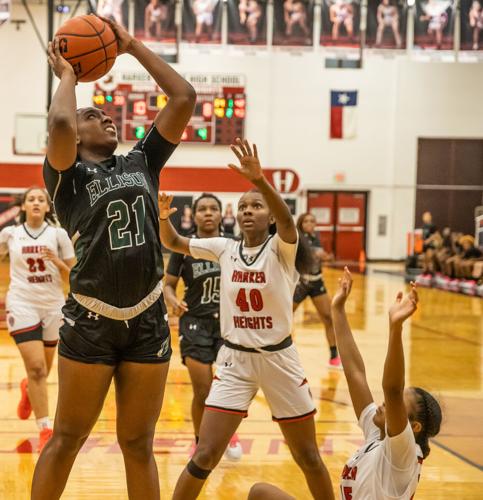 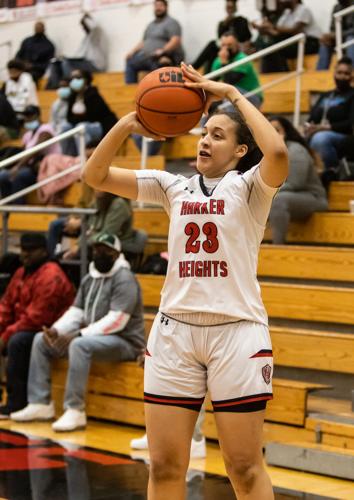 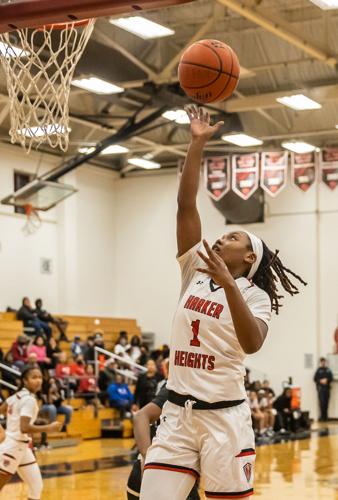 Harker Heights' Angelique Morgan (1) drives into the lane and shoots against Ellison at Harker Heights on Friday, Jan. 7, 2022. Ellison won 56-44. 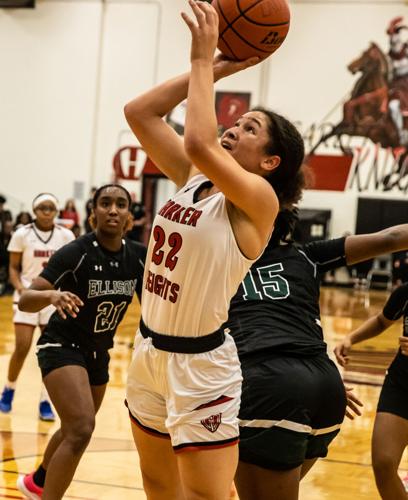 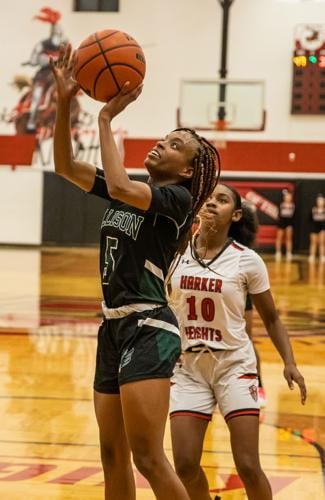 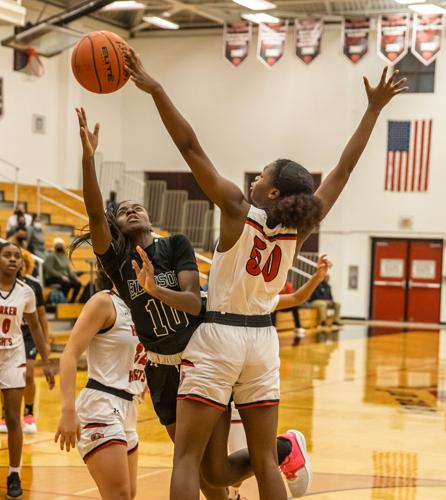 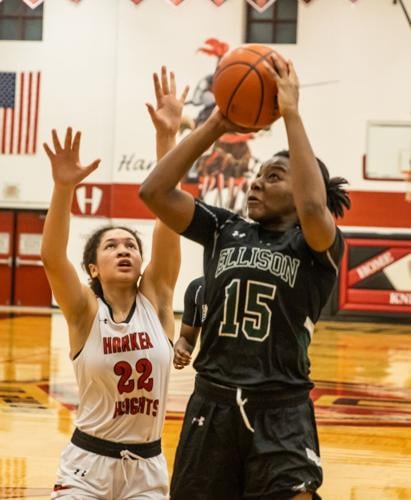 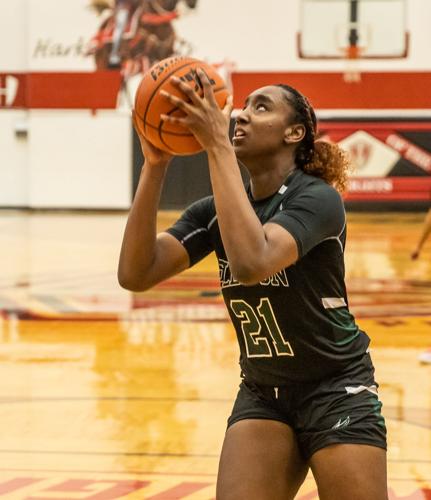 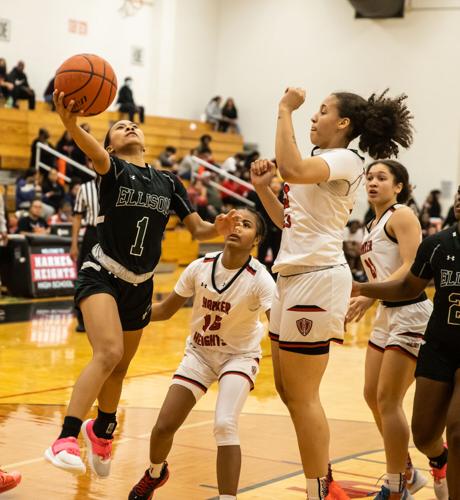 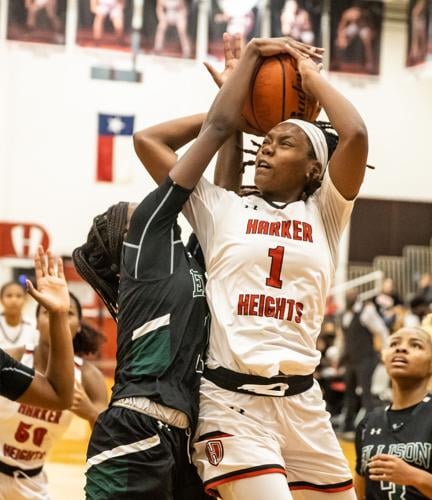 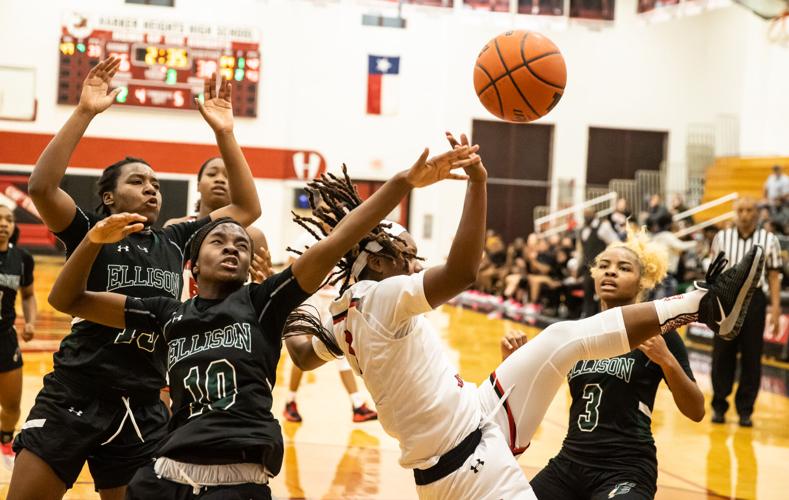 Harker Heights' Angelique Morgan (1) drives into the lane and shoots against Ellison at Harker Heights on Friday, Jan. 7, 2022. Ellison won 56-44.

HARKER HEIGHTS — The Ellison Lady Eagles rode some hot shooting in the second and third quarters Friday evening to snap a long drought against the Harker Heights Lady Knights.

Coach Carl Williams, an assistant coach who was filling in for head coach Sherry McKinnon, said it had been nearly four years — to his recollection — since Ellison had beaten Heights.

Kaylah Cherry’s 3-point bomb from about 24 feet away with just under two minutes to play found nothing but net and effectively iced the game in what ended up being a 56-44 Ellison victory.

With Friday’s victory, Ellison handed Harker Heights its first District 12-6A loss and gave the teams equal 4-1 district records heading into next week’s play. The two teams are tied for first place in the district.

“We have some seniors on our team that really wanted to win,” Williams said. “They’ve been on the team since they were freshmen and they wanted to win tonight. They came out and did that — executed everything that we talked about.”

Williams filled in for McKinnon who was tending to family matters.

Prior to Cherry’s dagger, the Lady Knights had nearly come all the way back in the fourth quarter. Trailing by 13 points going into the fourth, the Lady Knights buckled down on defense, forcing the Lady Eagles into a couple of scoring droughts — the longest being nearly three minutes.

During that stretch, Harker Heights began chipping away at the Ellison lead with buckets by Samiyah Walker, Empress Roberts and Angie Morgan, as well as free throws from Elyana Hatcher and Roberts.

Down the stretch, Kira Bass hit a bucket for Ellison to increase the lead to 10 with about 43 seconds left.

“I mean, it’s been happening all season and we talk about execution toward the end of the games,” Williams said.

Williams added that Ellison has lost a handful of games by not very many points. He said he and the coaches tell the girls to push through.

Leading the team and keeping the players on the floor grounded throughout the scoring droughts was senior point guard Evelyn Lorenzo.

Williams highlighted her leadership as a key factor in the victory.

“It’s something about a team that when a coach doesn’t have to tell or call a lot of things and she gets out there and she leads them and pulls them together and says, ‘This is what we want to do,’ and they do it and they believed in her, that’s a player-led team and those teams are usually championship-type teams,” Williams said.

Fittingly, Lorenzo got the final points of the game from the free-throw line with 27 seconds remaining.

Lorenzo shared leading-scorer accolades with teammate Bass, both of whom scored 14 points. Lorenzo also finished with five assists and had several clutch rebounds and steals toward the end of the game.

Heights’ Roberts had 13, and Morgan and Walker each had 12.

When they weren’t scoring, the trio continued to contribute for Heights, pulling missed baskets off the boards, scrapping for loose balls and dishing assists to teammates.

Also providing key rebound numbers for Harker Heights to keep them in the game were Nia Brown, who came off the bench to pull in four rebounds in the second half, and Tyra Oliver, who grabbed five boards.

Other scorers for the Lady Knights were Hatcher with four points, and Beanka Saleh-Rivera, Oliver and Brown, who had one point apiece.

Also scoring for the victorious Lady Eagles were Allison Owens with seven, Asia Zachary and Cherry with six points apiece, Kania Prichett with five and Kera Harvey with four points.

Both teams head back on the road in their next games.

Despite a valiant effort throughout the entire game by the Shoemaker Lady Grey Wolves, a defensive switch by the Ellison Lady Eagles proved to…

Picture #6 truly shows the referees in the area need frequent re-training, as that is a clean block. They have cost many games. Great picture taking Kdhnews!