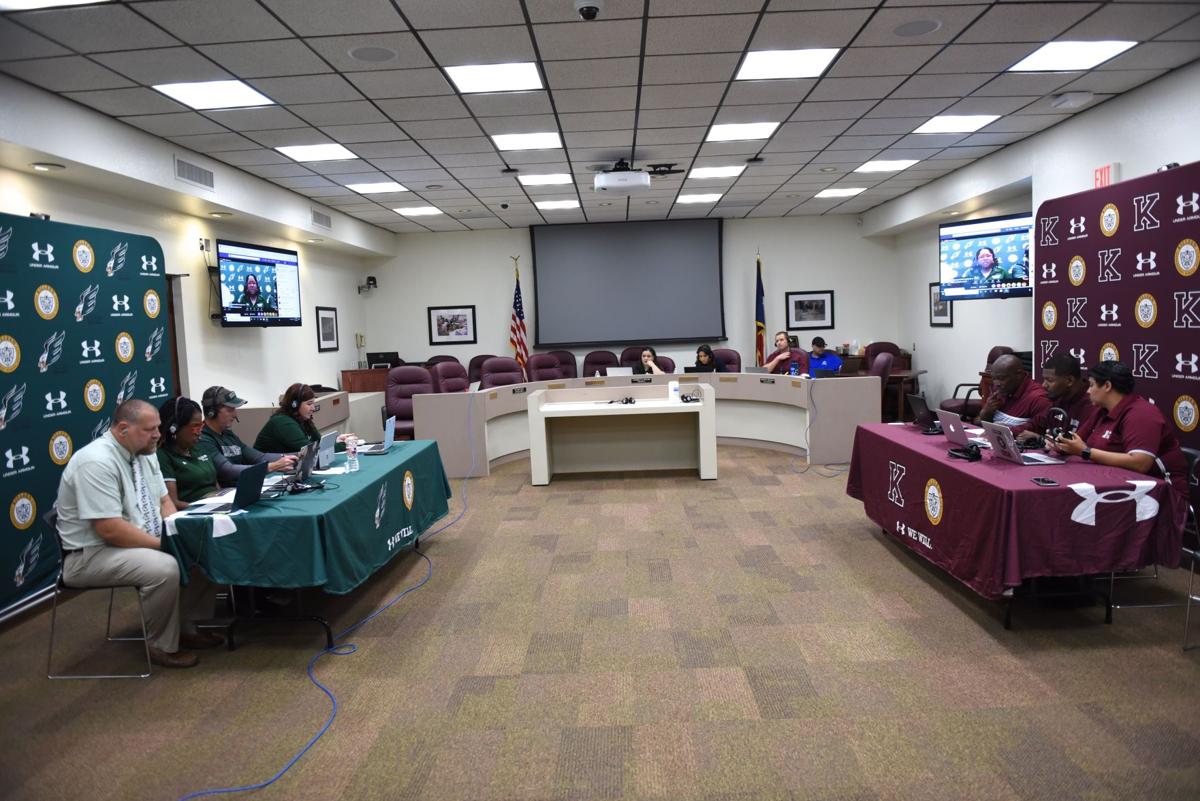 In the Killeen ISD Administration Boardroom on Wednesday, Ellison High School coaches conduct virtual signings as Killeen High School coaches standby for their turn during the district’s first-ever livestreamed athletic signing event. A total of 44 student-athletes from four high schools signed national letters of intent in their own homes while school district and campus athletic officials gave guidance and the public watched through social media. 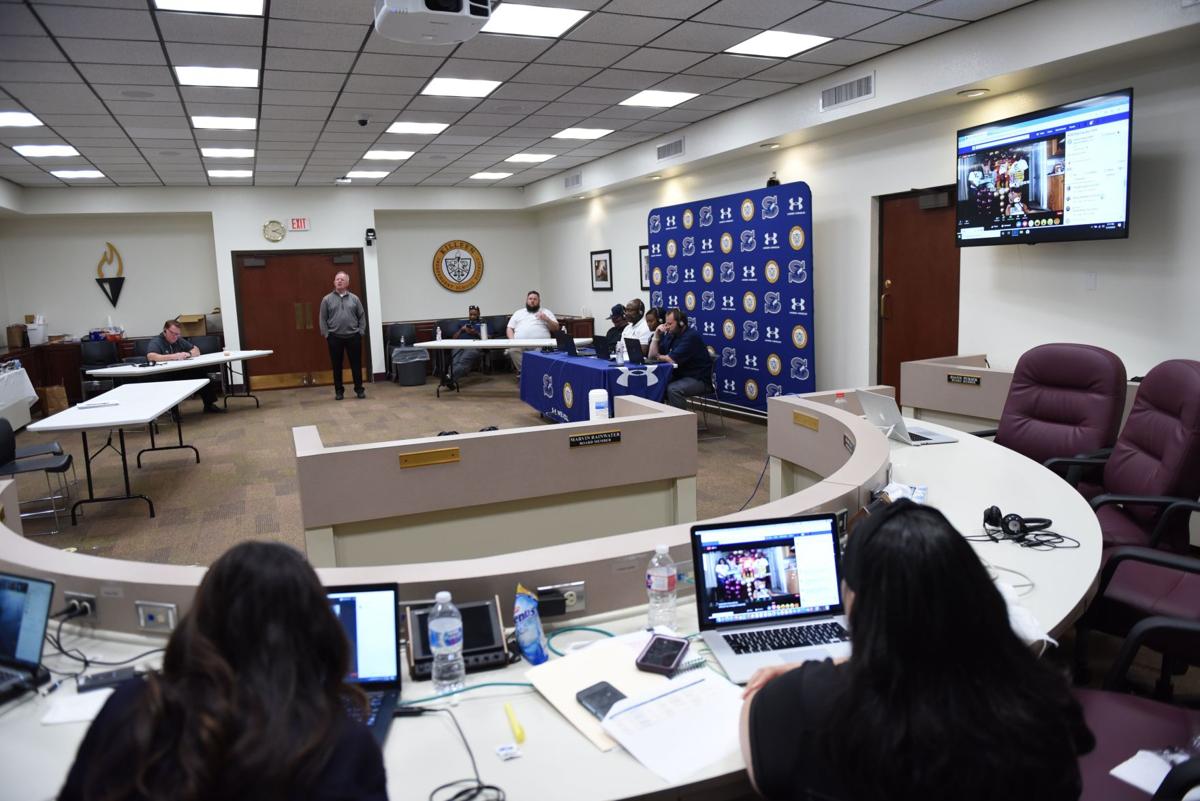 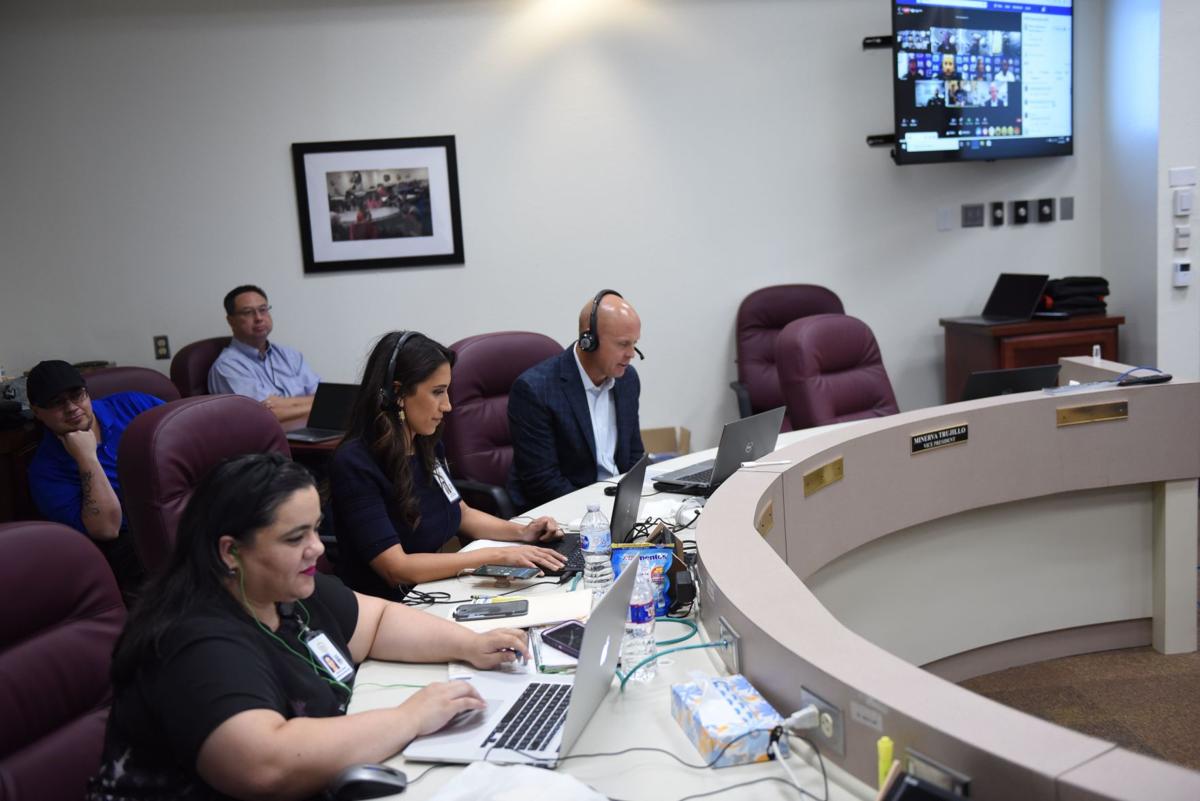 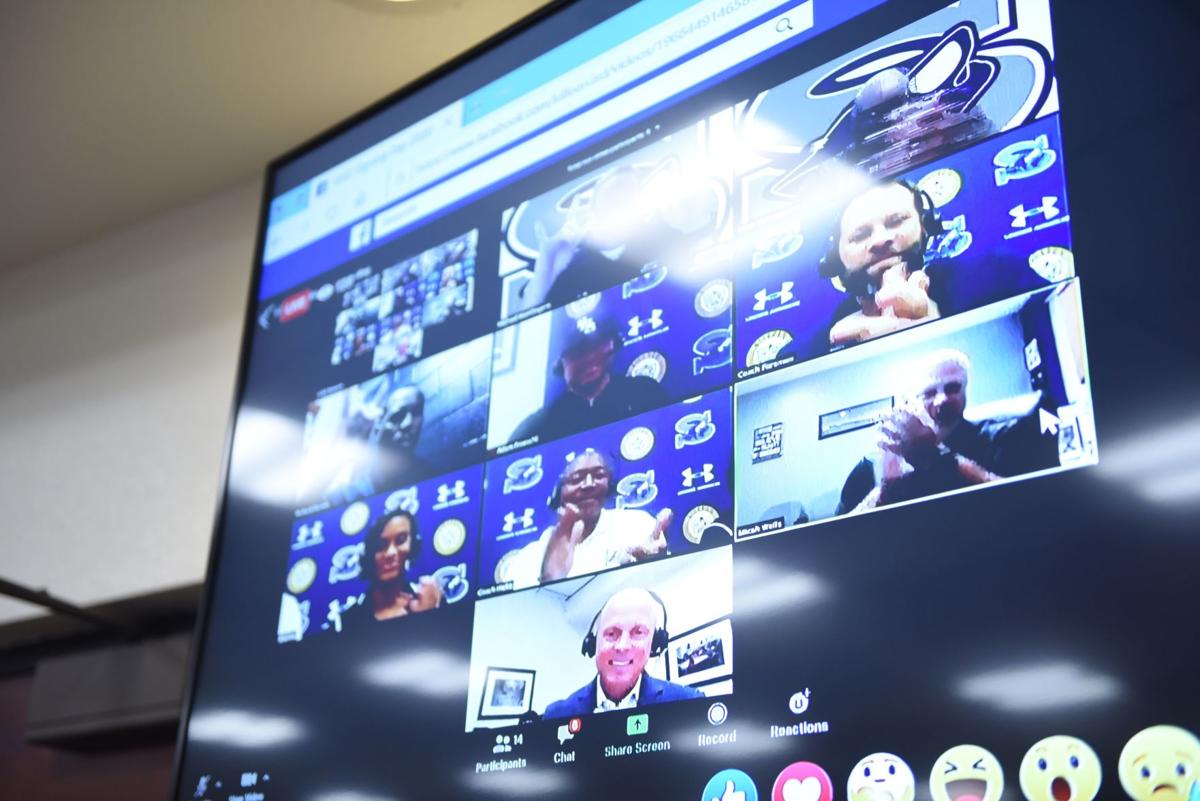 In the Killeen ISD Administration Boardroom on Wednesday, Ellison High School coaches conduct virtual signings as Killeen High School coaches standby for their turn during the district’s first-ever livestreamed athletic signing event. A total of 44 student-athletes from four high schools signed national letters of intent in their own homes while school district and campus athletic officials gave guidance and the public watched through social media.

Killeen Independent School District’s four high schools on Wednesday celebrated the ceremonial signings for 44 seniors scheduled to continue their education and athletics at the college level in an unprecedented livestreamed social media session.

The signings took place virtually, with each campus athletic coordinator speaking at the district’s administration boardroom to introduce individual coaches and students, who signed national letters of intent in their homes, with family members cheering in the background.

At the end, Harker Heights Athletics Coordinator Jerry Edwards and his fellow coaches in the boardroom cheered — for the athletes and successful conclusion of a unique signing process.

“It was a different way to honor and recognize our athletes,” he said. “These students have represented our school and the community. We’re proud of them.”

While the online version was not preferred, Edwards pointed out that he noticed how families decorated their living rooms just as they normally decorate tables for traditional

ceremonies in school gyms and auditoriums.

He also pointed out that athletes learn to adapt to challenges in the competitive arena, in the classroom and even in the midst of a disruptive global virus.

“They have been a part of everything,” he said, noting that one won a state championship, that more than one competed in multiple sports, another participated in band and other activities.

“Talented kids get signed,” he said.

Wright, seated with three other Ellison coaches, smiled and laughed at times as highlight videos aired and students signed.

“You could see the smiles of parents,” he said. “You want them to have that energy. Seeing the families all together and their fancy backdrops is fun to see.”

Six Killeen High School student-athletes signed letters of intent to the praise and applause of their coaches and other guests.

“This is a time when we don’t know what tomorrow will bring, but we do know about the work these athletes have put in,” said Jennifer Graham, KHS girls basketball coach and assistant campus athletic coordinator.

“We don’t forget our kids,” she said, noting that this year’s unusual format actually made the signings available to a larger audience than ever before.

“It was great,” she said, “to see them in good spirits. The parents have always been there and they were there today.”

“These kids sacrificed far more than just during high school,” said Shoemaker Athletic Coordinator Toby Foreman. “You set a goal at a young age and it’s a lot of work. Unfortunately, we couldn’t do it in person. It’s a great attribute to our administration we could get it done in this way.”

Like all the coaches at every school, Foreman and his staff laughed along with students and their family members during the streamed ceremonies. “I thought it was pretty cool we could see our students and parents in their home settings. It’s exciting for the families, for their friends and for all the coaches.”

Superintendent John Craft also praised the student-athletes and their families, noting that the seniors would soon graduate and put into practice the skills they have learned in sports and in working through the unique challenges of the end of their senior year.

“You have learned to deal with adversity,” said Craft. “Don’t let anything slow you down in achieving your highest aspirations in life.”