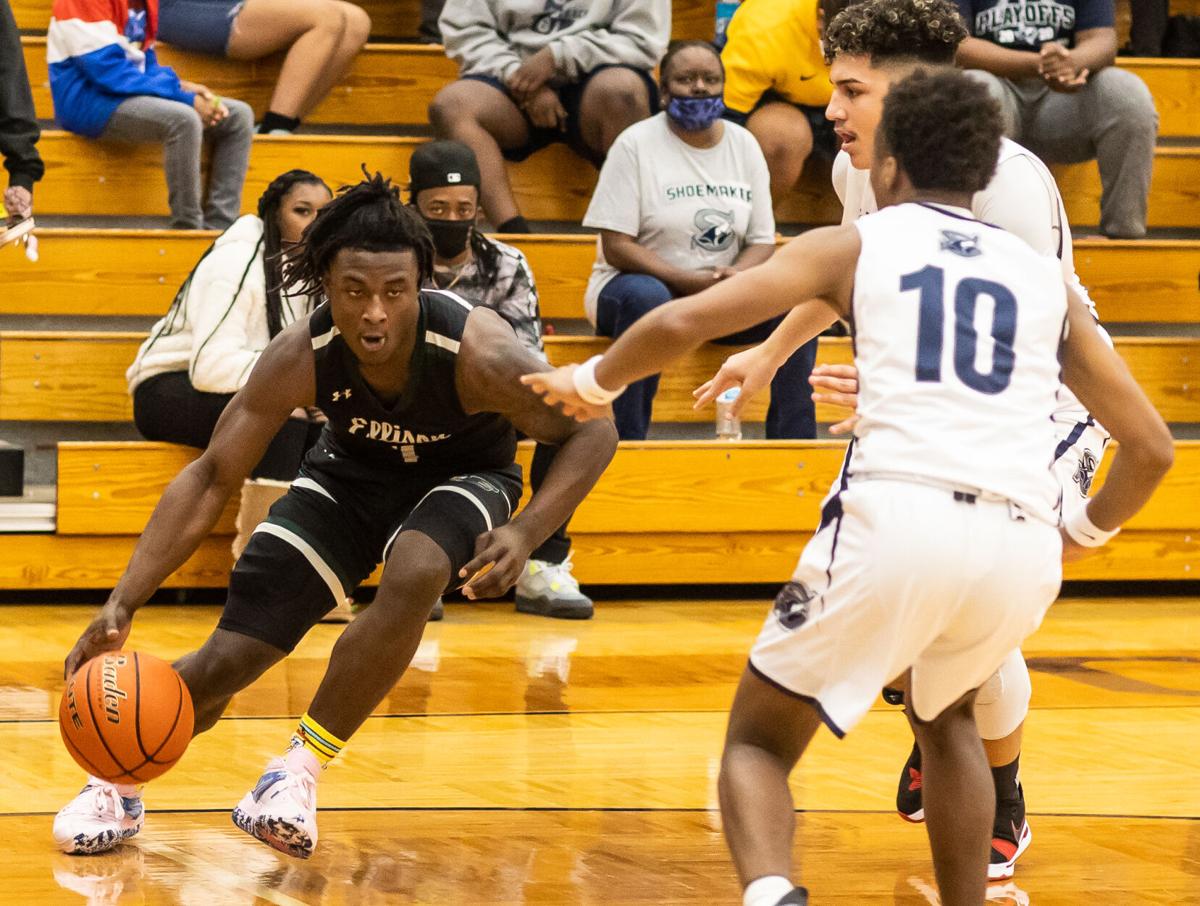 Ellison's Javon Walker shoots and scored to cap an 11-0 run against Shoemaker on Friday at Shoemaker. No. 14 Ellison won 74-50. 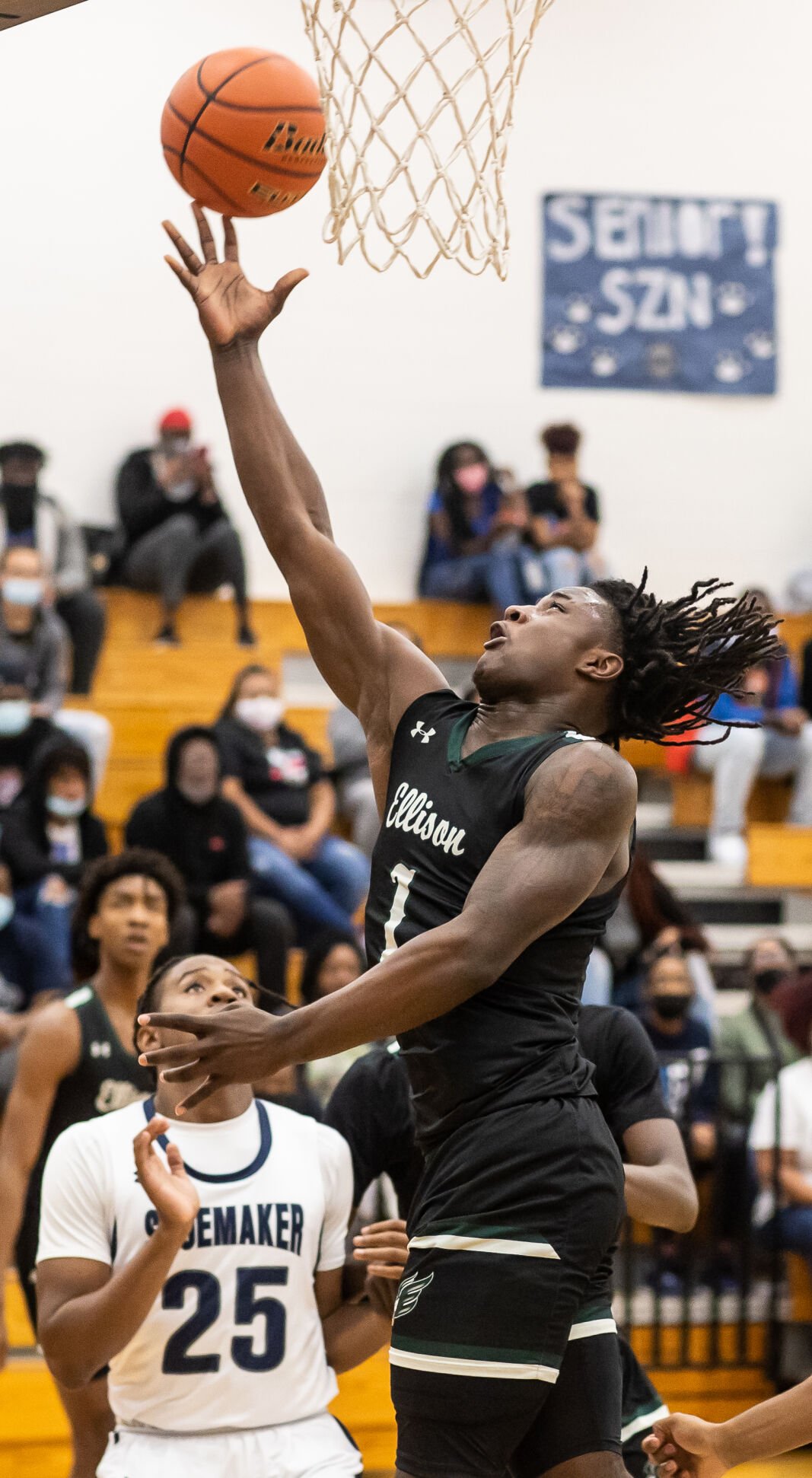 Ellison's Jamyron Keller (1) shoots under the basket as Shoemaker's Kobe Burgess (25) waits for a rebound Friday at Shoemaker. No. 14 Ellison won 74-50. 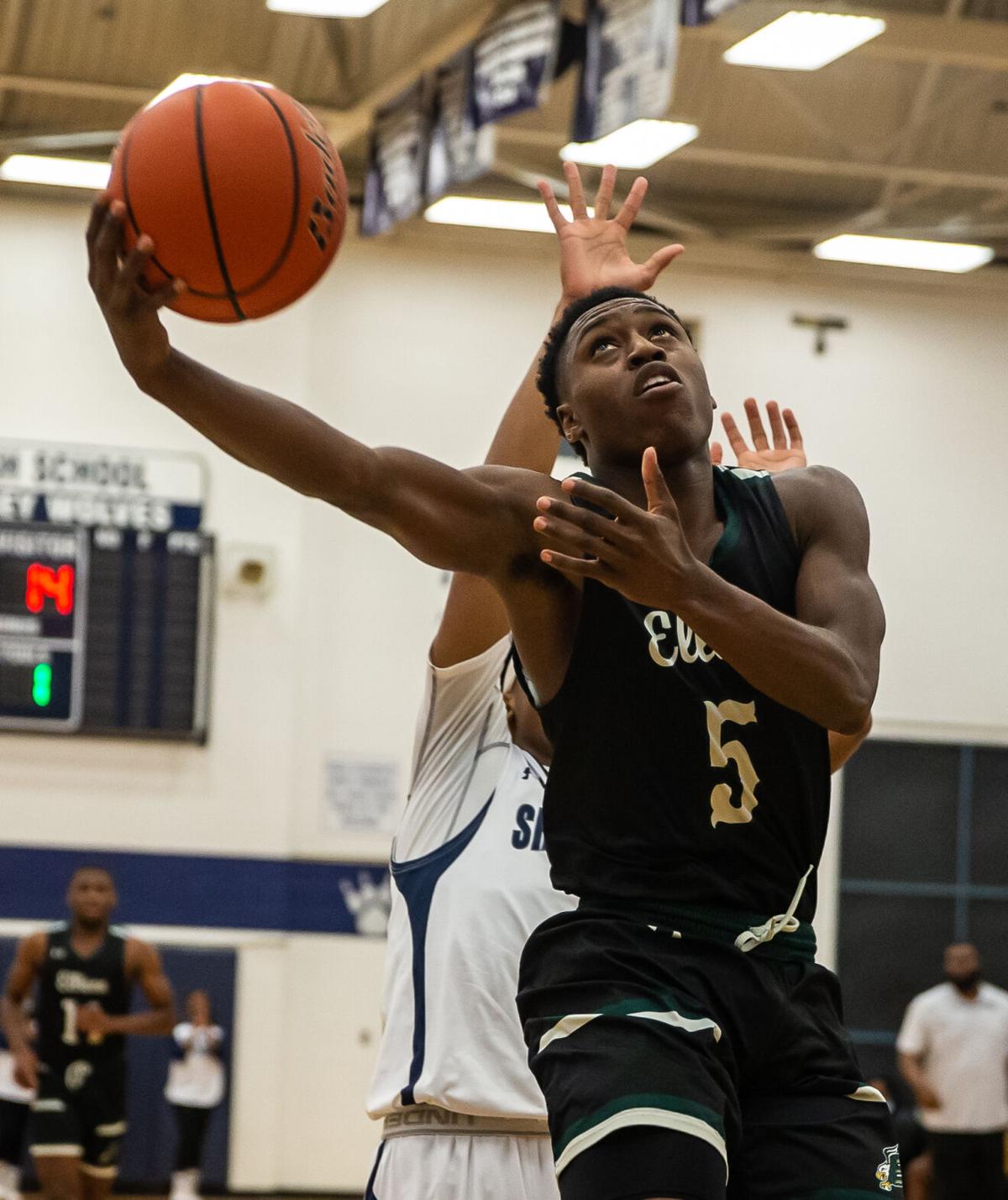 Ellison's Jayce Wright (5) shoots a layup in front of a Shoemaker defender Friday at Shoemaker. No. 14 Ellison won 74-50. 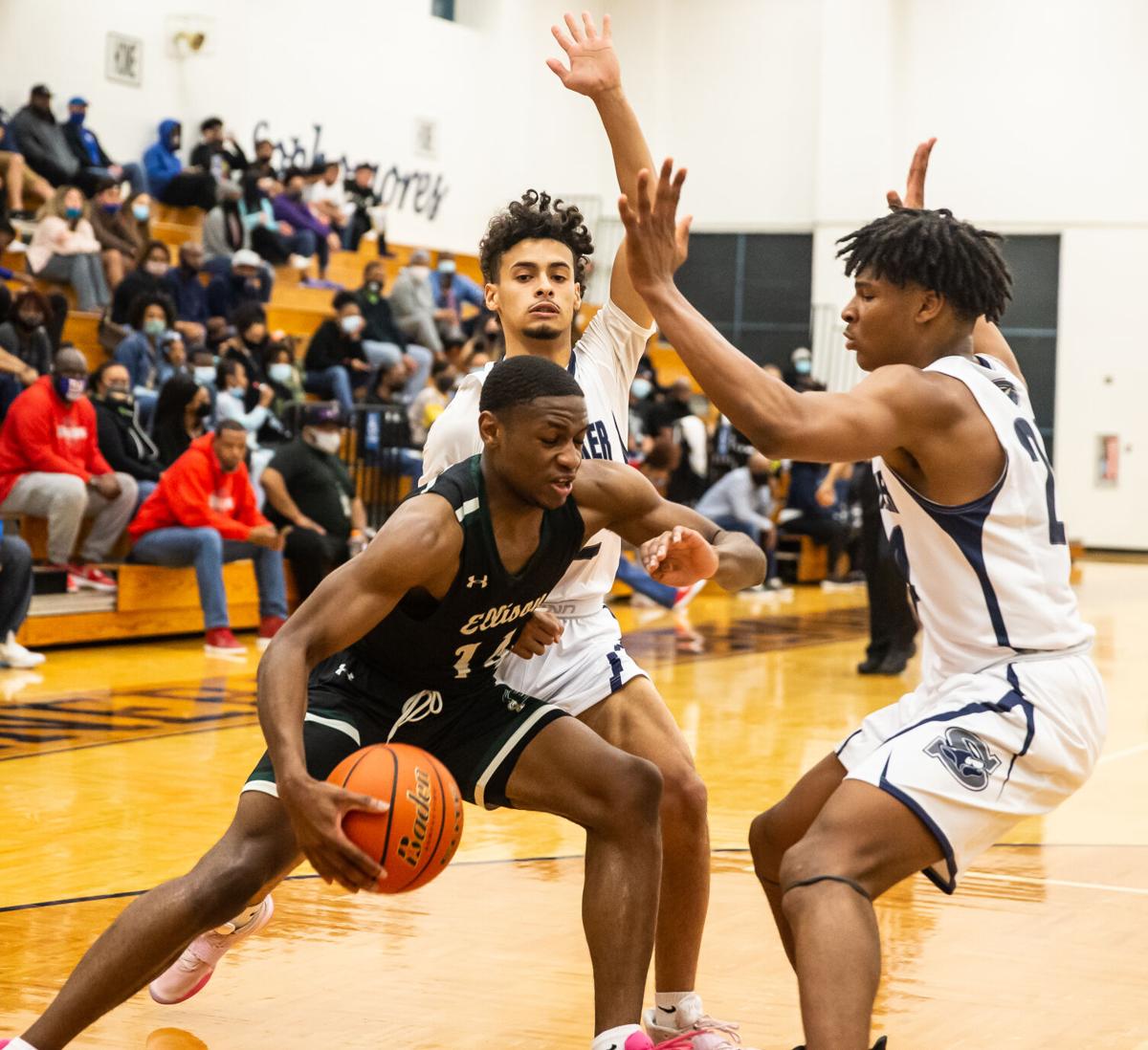 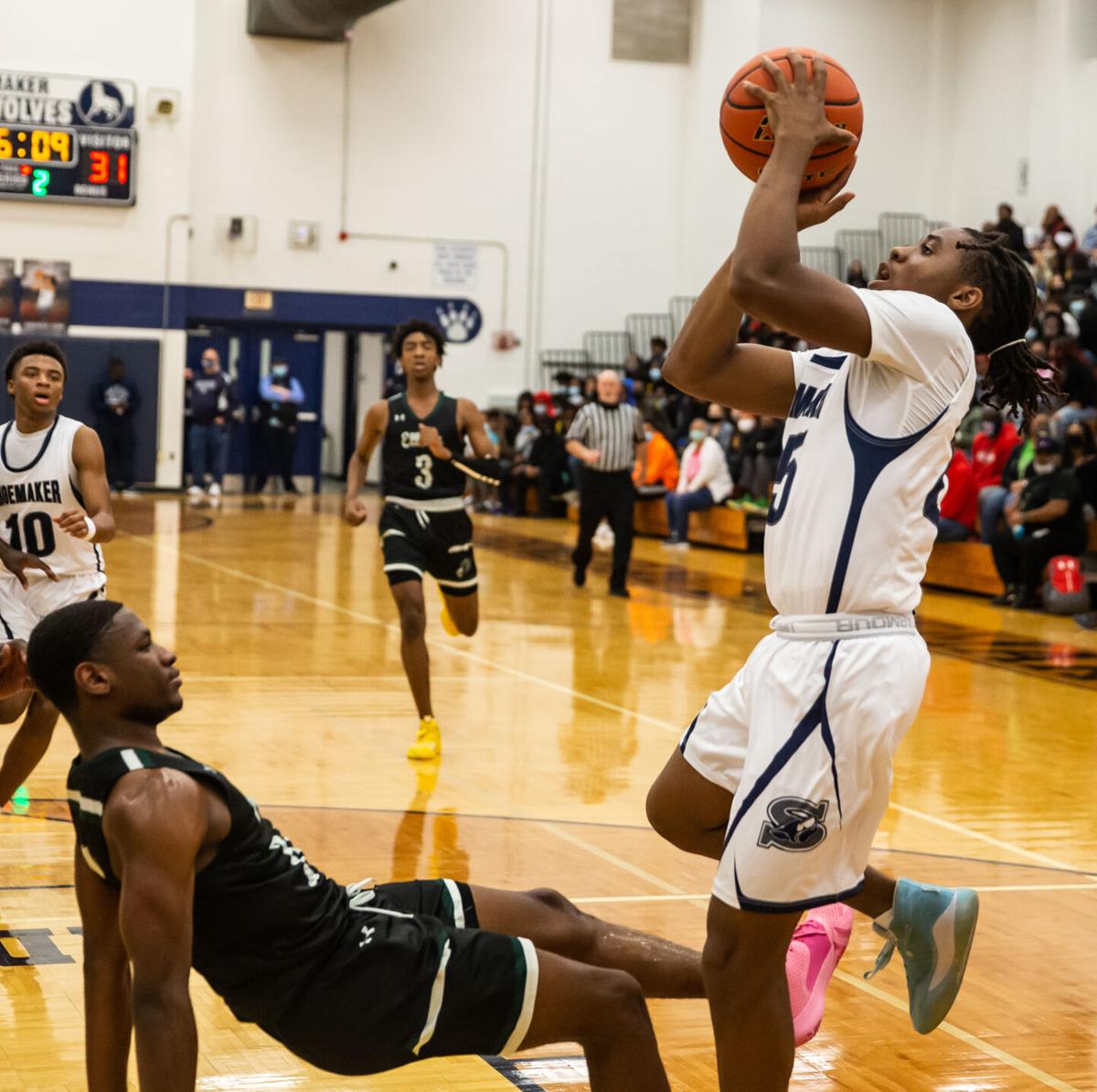 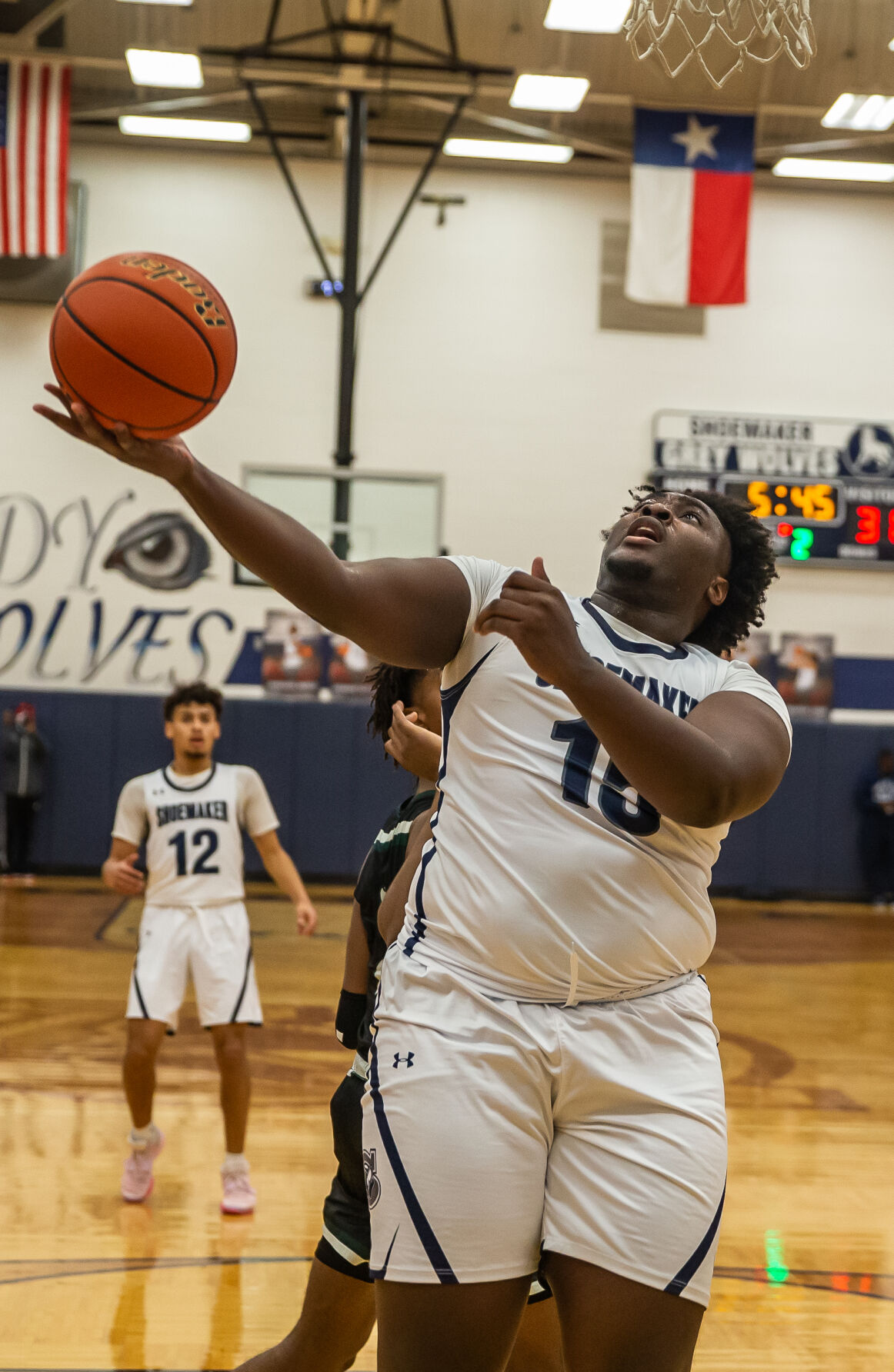 Shoemaker's Lakyi Ellison (15) shoots in front of an Ellison defender Friday at Shoemaker. No. 14 Ellison won 74-50. 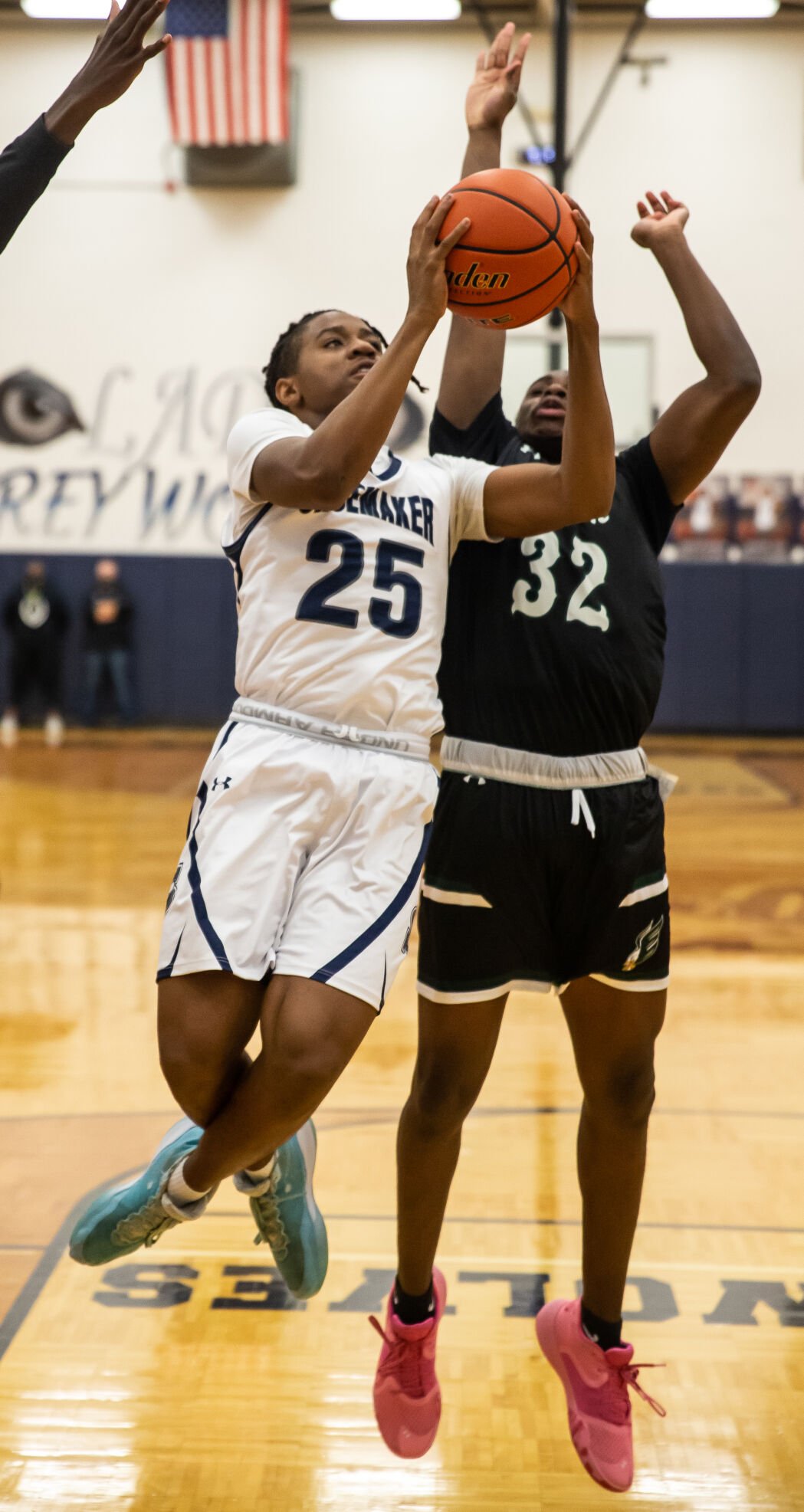 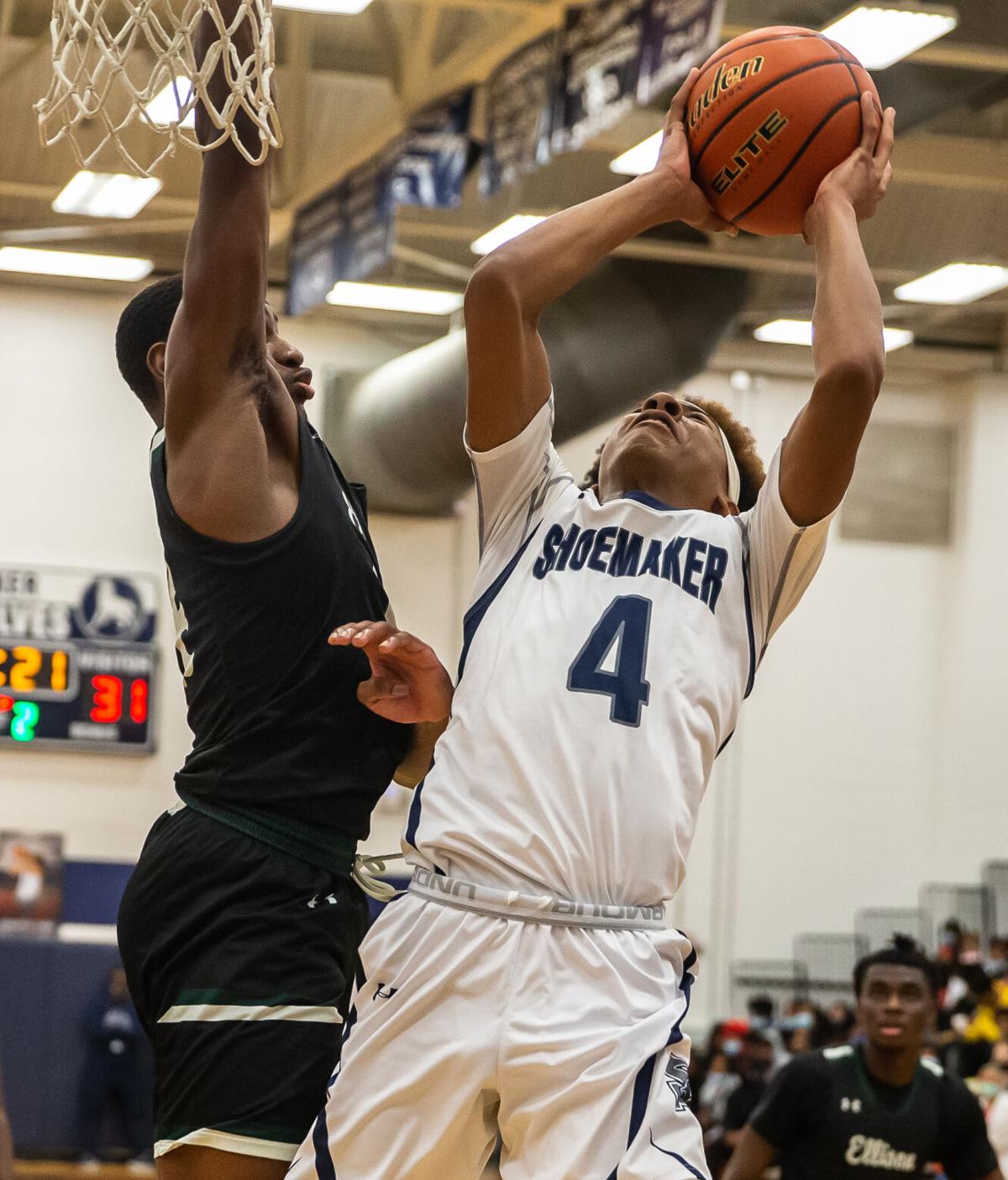 Ellison's Javon Walker shoots and scored to cap an 11-0 run against Shoemaker on Friday at Shoemaker. No. 14 Ellison won 74-50.

Ellison's Jamyron Keller (1) shoots under the basket as Shoemaker's Kobe Burgess (25) waits for a rebound Friday at Shoemaker. No. 14 Ellison won 74-50.

Ellison's Jayce Wright (5) shoots a layup in front of a Shoemaker defender Friday at Shoemaker. No. 14 Ellison won 74-50.

Shoemaker's Lakyi Ellison (15) shoots in front of an Ellison defender Friday at Shoemaker. No. 14 Ellison won 74-50.

Javon Walker scored 28 points and 14th-ranked Ellison completed a season sweep of the Grey Wolves with a 74-50 win at Shoemaker on Friday.

The night got even better for the Eagles when No. 21 Harker Heights lost 59-56 at Bryan, leaving Ellison alone in first place in District 12-6A.

Other scorers for Ellison were Jamyron Keller with 17, and Kesean Garland with seven.

Leading scorers for Shoemaker were Kobe Burgess with 10, Antwone Gonzales with eight, and Ti’ajae Owens with five.

Ellison opened the game with Walker sinking three 3-pointers in a row. By the time Walker scored again, raising the score to 11-0, the Ellison crowd erupted.

“He can really shoot,” Ellison coach Alberto Jones Jr. said. “He does a good job. He tails off once we get a lead. But I think that’s got to do with concentration, like the rest of us. He’s a heck of a player.”

“That was a very slow start,” Shoemaker coach Jeremy Hensley said. “You just can’t start that way. That’s what Ellison looks to do, and they do a good job of it. If you’re not ready to play from the get-go, it’s hard to come back and really get in the game.”

The opening of the second quarter saw Shoemaker continue struggling against Ellison’s defense, with several of their shots blocked. As the quarter went on, Shoemaker ramped up its intensity and claimed six unanswered points to pull within 31-17 with a little over half of the quarter left.

The Grey Wolves continued chipping away and trailed 41-26 at the half.

“I thought we started off with a whole lot of energy,” Jones said. “Then we hit a lead and we relax a lot.”

In the third quarter, the game turned into a back-and-forth shootout, but with half the quarter over Ellison led 49-29.

Walker once again made his presence known, putting up several 3s to give the Eagles plenty of leeway on the scoreboard. The third quarter ended with the Eagles up 59-36.

The fourth quarter started off with a slower tempo than the others, but Ellison quickly picked up the pace and continued showing the relentless offense they displayed earlier.

While Shoemaker started matching Ellison’s output as the final quarter went on, the deficit was too big to close and the Eagles won with a score similar to the 74-54 finale in the teams’ first meeting at Ellison.

Even in victory Jones said he saw changes that needed to be made.

“I thought when we’re locked in, we’re pretty good,” Jones said. “We’ve just got to be able to play when we’re up. We’ve got to fight that human nature to relax when you’re up big.”

Ellison heads to Copperas Cove on Tuesday. Shoemaker travels to Harker Heights on Tuesday looking for another win over the Knights after upsetting them in the first meeting.

No. 11 Ellison boys roll past Shoemaker in 12-6A opener