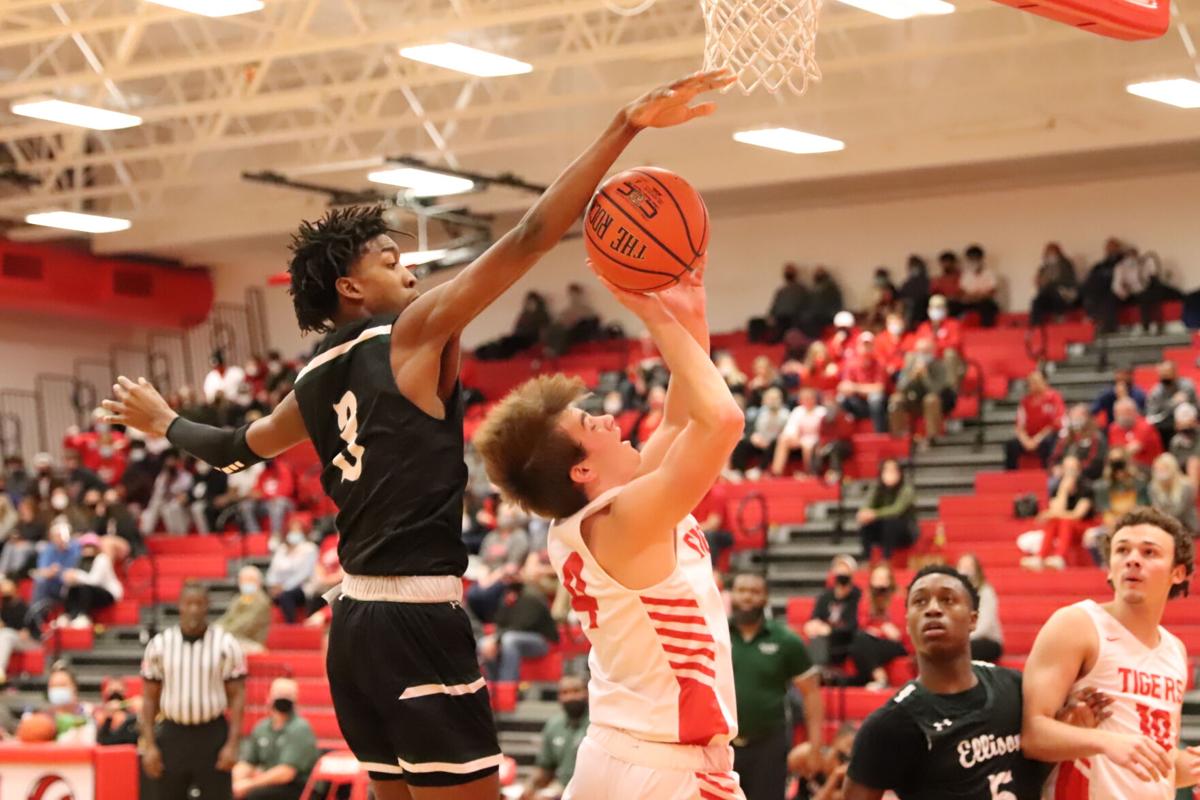 Belton's Luke Bramlett (4) tries to get a shot off against Ellison's Javon Walker on Friday in Belton. 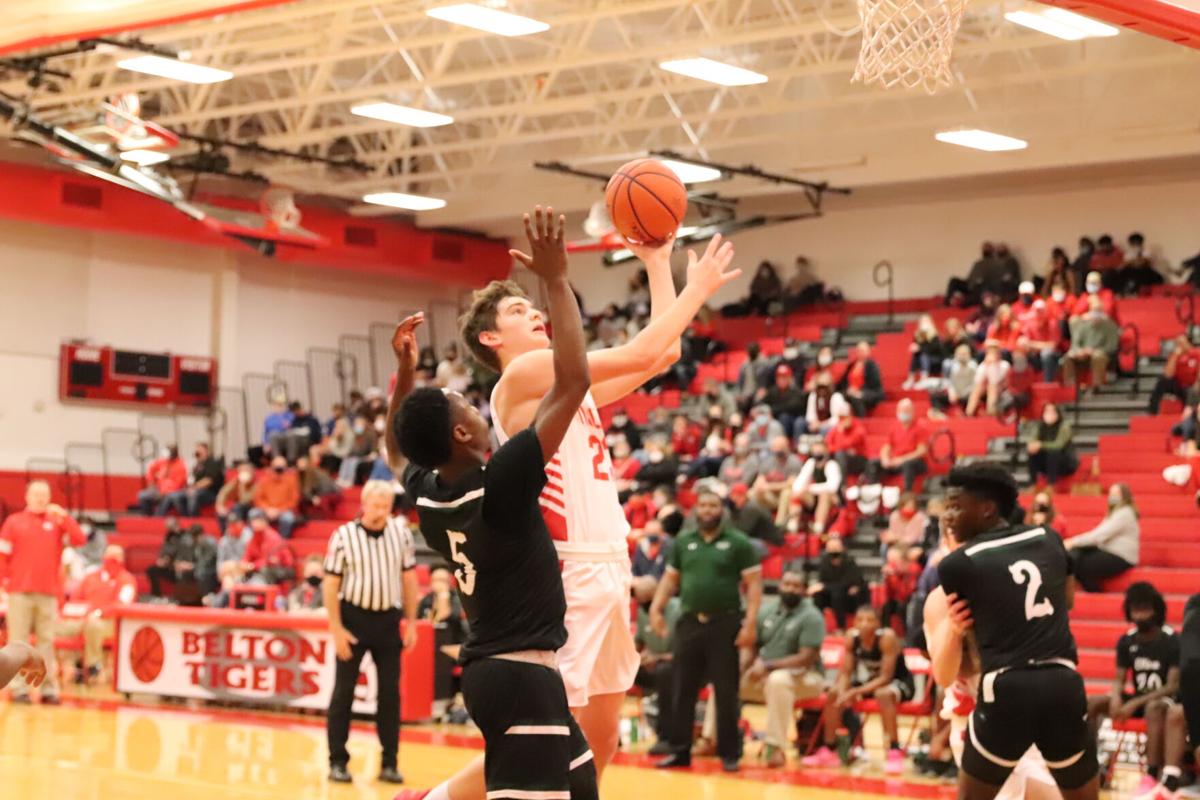 Belton's Trap Johnson (23) puts up a short jumper over Ellison's Jayce Wright (5) on Friday in Belton. 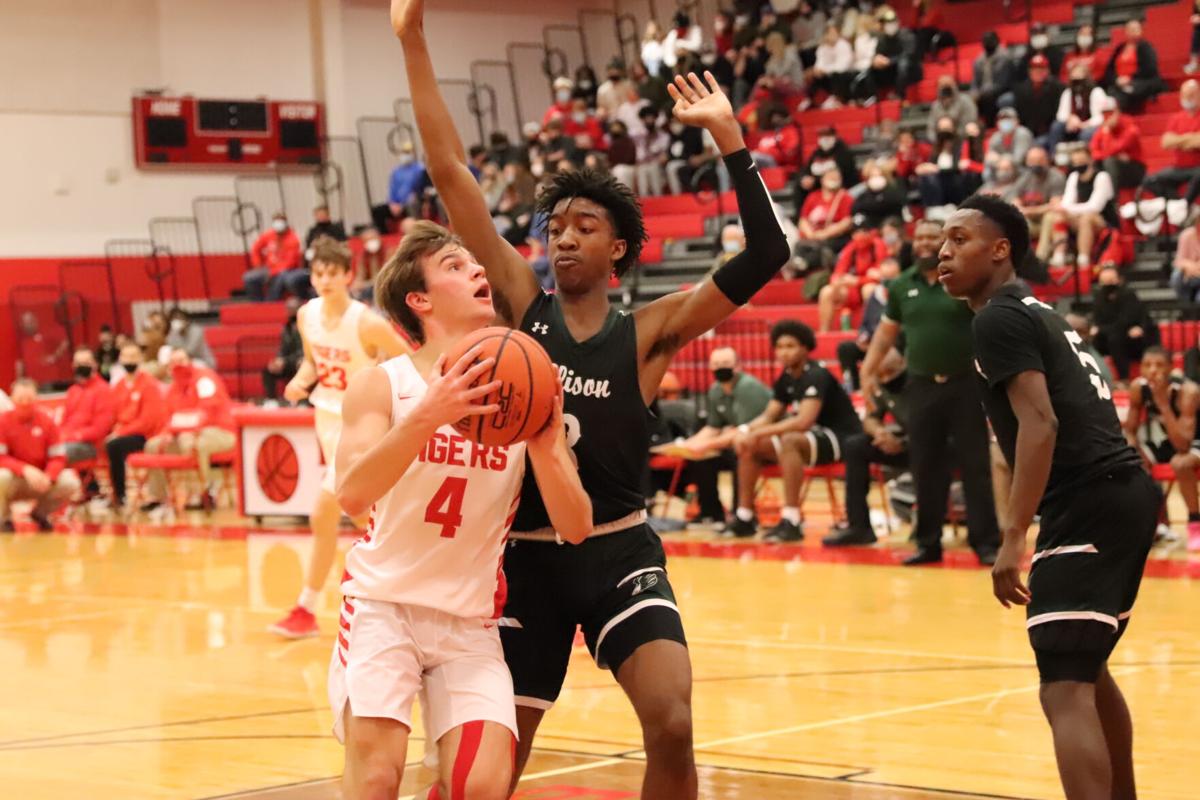 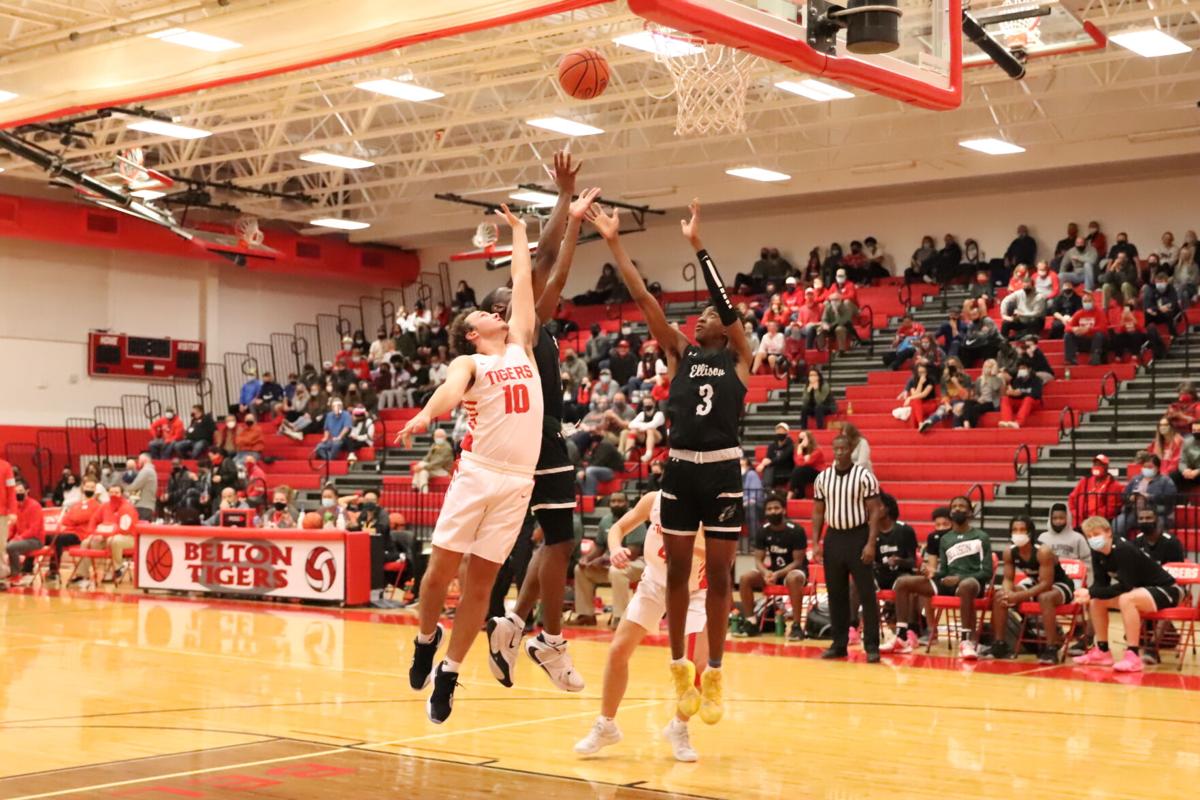 Belton's Ben Jones (10) battles against Ellison's Javon Walker (3) and Trendon Stewart (14) for a rebound on Friday in Belton. 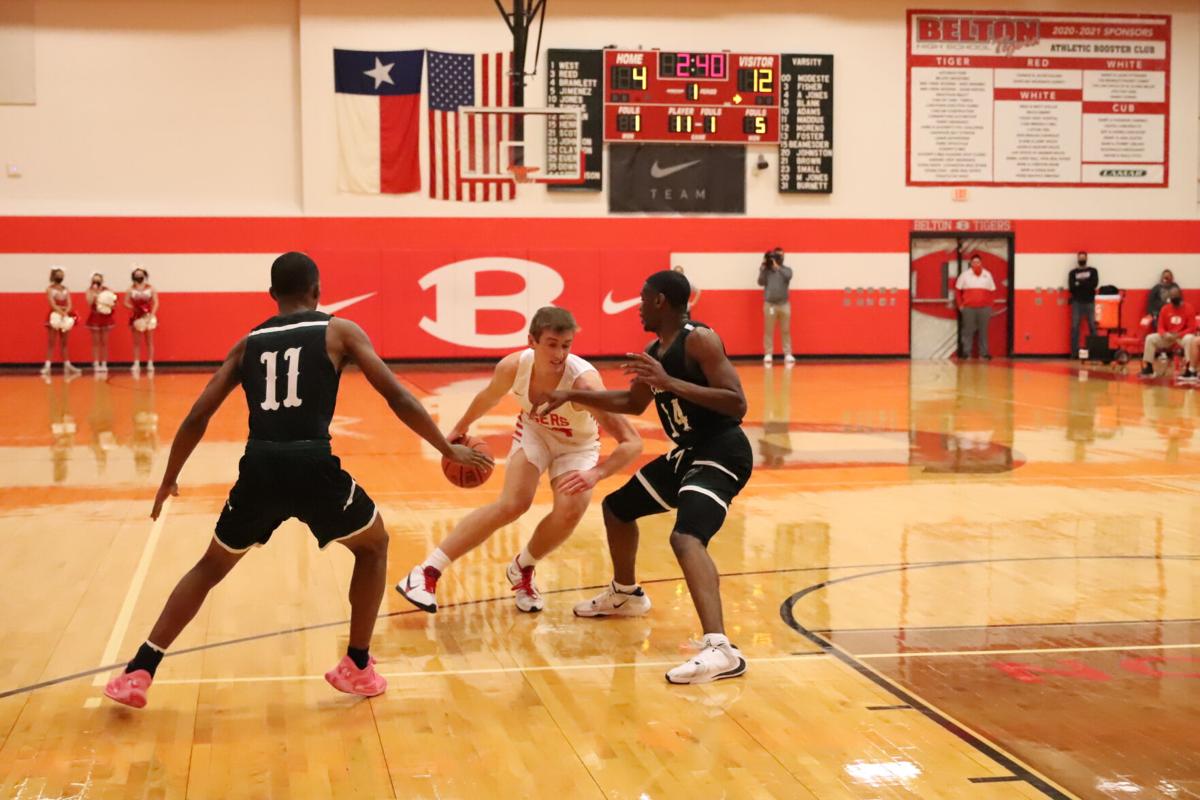 Belton's T.J. Johnson (44) tries to get past Ellison's Deondra Thomas (11) and Trendon Stewart (14) on Friday in Belton. 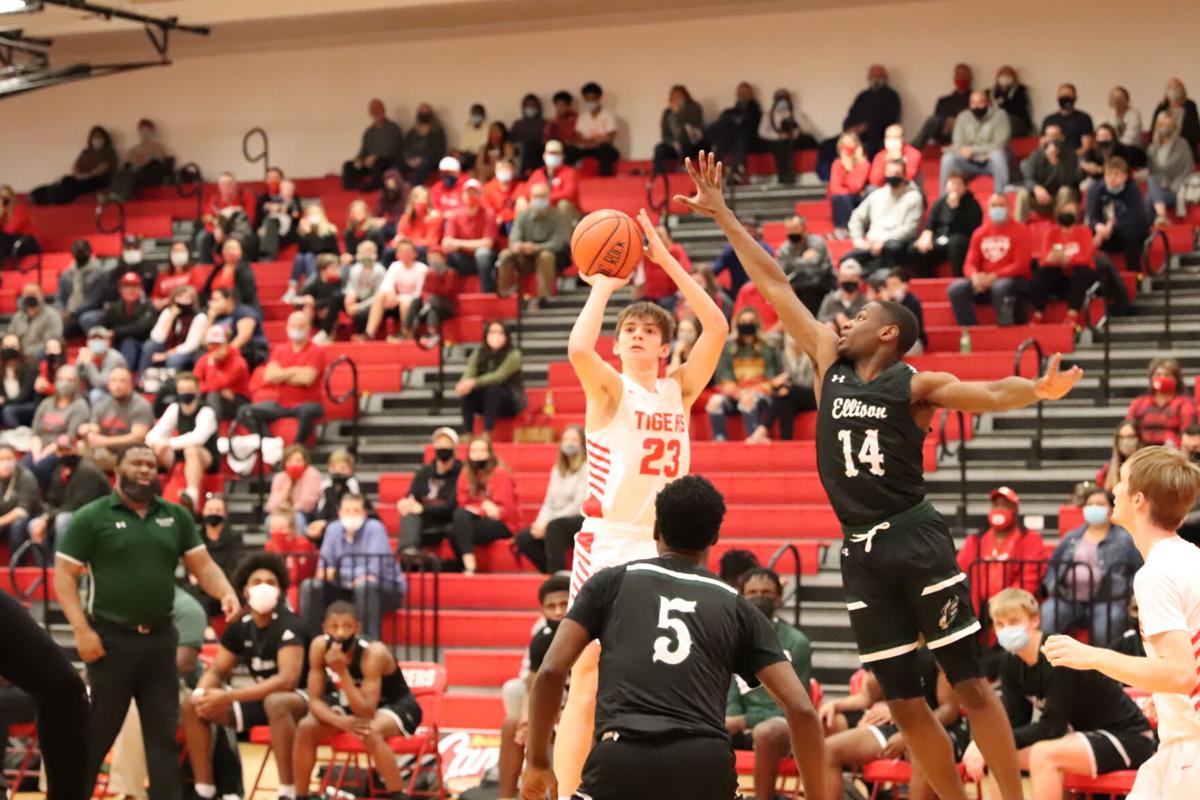 Belton's Luke Bramlett (4) tries to get a shot off against Ellison's Javon Walker on Friday in Belton.

Belton's Trap Johnson (23) puts up a short jumper over Ellison's Jayce Wright (5) on Friday in Belton.

Belton's Ben Jones (10) battles against Ellison's Javon Walker (3) and Trendon Stewart (14) for a rebound on Friday in Belton.

Belton's T.J. Johnson (44) tries to get past Ellison's Deondra Thomas (11) and Trendon Stewart (14) on Friday in Belton.

The only thing to be answered was if they would be alone or in a tie with up to four other teams.

The ninth-ranked Ellison Eagles did their part to make sure it was the latter, as they dominated the Tigers 70-51 at Tiger Gym to move into a tie for the district lead.

Belton’s Trap Johnson hit the first basket of the game 30 seconds in to give the Tigers a 2-0 lead, but after that the Eagles controlled the contest.

Back-to-back steals by Jayce Wright in the first quarter allowed the Eagles to go on a 6-0 run with baskets by Wright, Kesean Garland and Trendon Stewart to turn their early 6-4 lead to a 12-4 lead.

They lead 17-10 after the opening quarter, and the second quarter belonged to Javon Walker, who put on a shooting clinic, scoring 15 of his game-high 25 points in the second, all 3-pointers, to give the Eagles a 39-24 lead at the half.

Stewart, who added 14 points for the Eagles, was the go-to guy in the third, adding eight points, half of which came at the free-throw line, to help the Eagles lead 56-38 after three quarters.

Belton (12-3, 3-1) entered the night as the lone district team without a loss, with Ellison (16-1, 3-1) tied with with Shoemaker, Harker Heights and Bryan all a game back in second. All three of the other teams won as well Friday, producing a massive jumble at the top of the standings with a five-way tie for first.

Ellison played a tight man full-court defense most of the night, with especially tight coverage on Belton’s TJ Johnson, who still finished with 15 points. three less than his younger brother Trap, who had 18, including four 3-pointers. The elder Johnson had an off night from deep, missing all five 3-point attempts.

“We didn’t shoot it good period the whole night,” Belton coach Jason Fossett said. “But I give a lot of credit to Ellison for that. They are really, really good defensively and Coach (Alberto) Jones does a great job on the defensive end over there. I was more disappointed with what we did defensively.”

The Tigers next three games are against the remaining teams tied for first, starting with Bryan at home on Tuesday, followed by Shoemaker.

The Eagles host Killeen on Tuesday.

It never gets any easier.