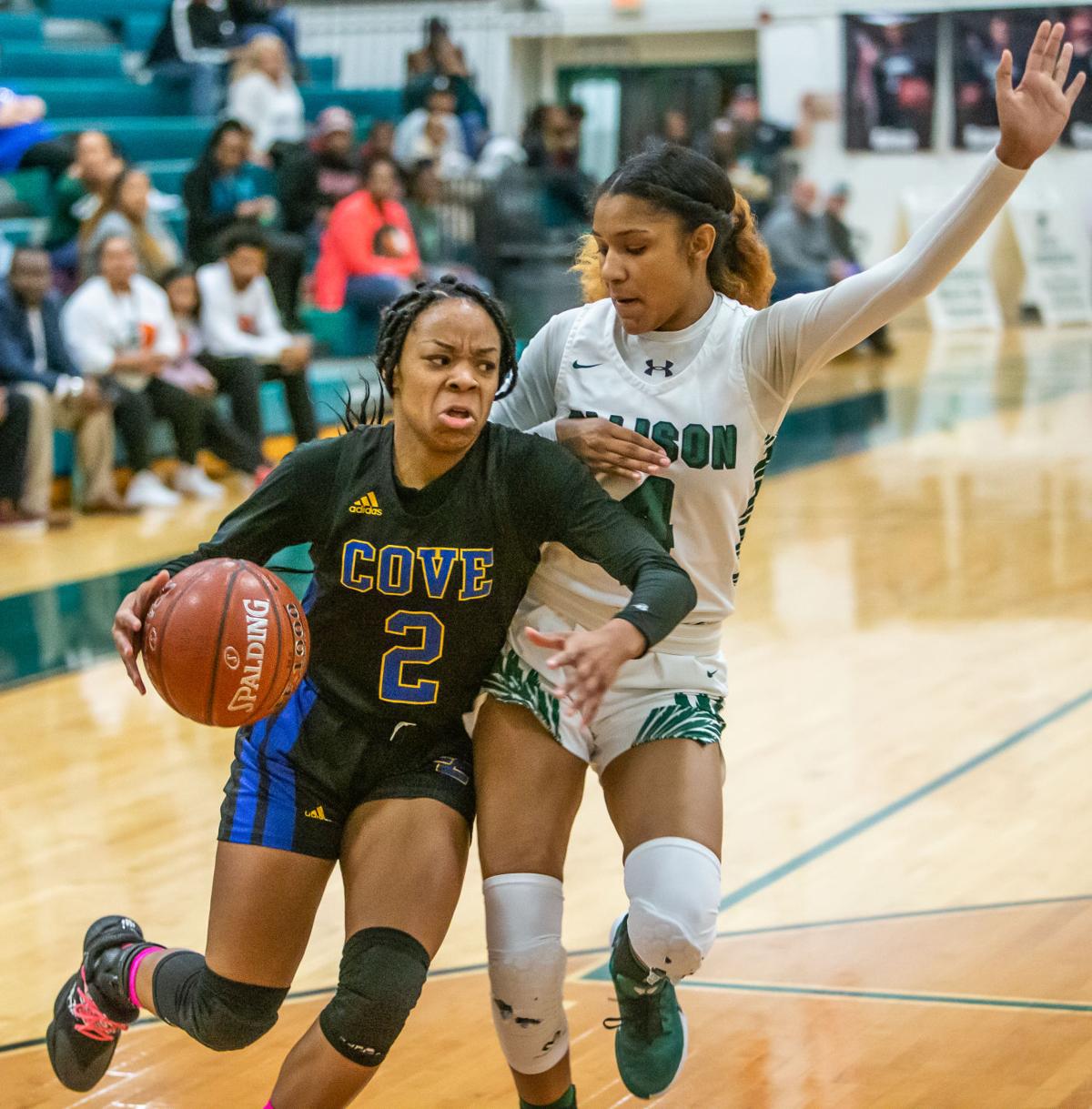 Copperas Cove’s LiVonna Wallace (2) drives against Ellison’s Arrianna Faulks to get to the baseline on Tuesday at Ellison High School. 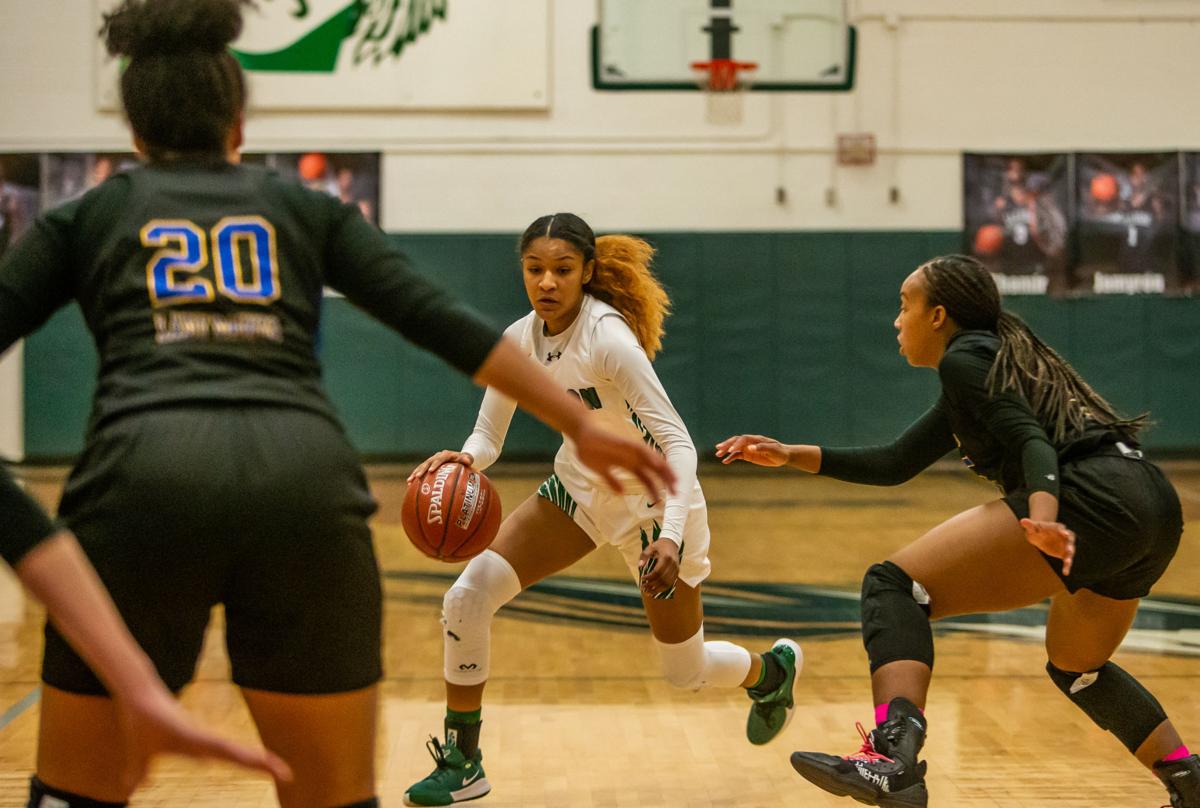 Ellison's Arrianna Faulks (4) looks to drive into the lane as Copperas Cove's Leah Powell (25) and Kaysha McCloud (20) defend on Tuesday at Ellison. 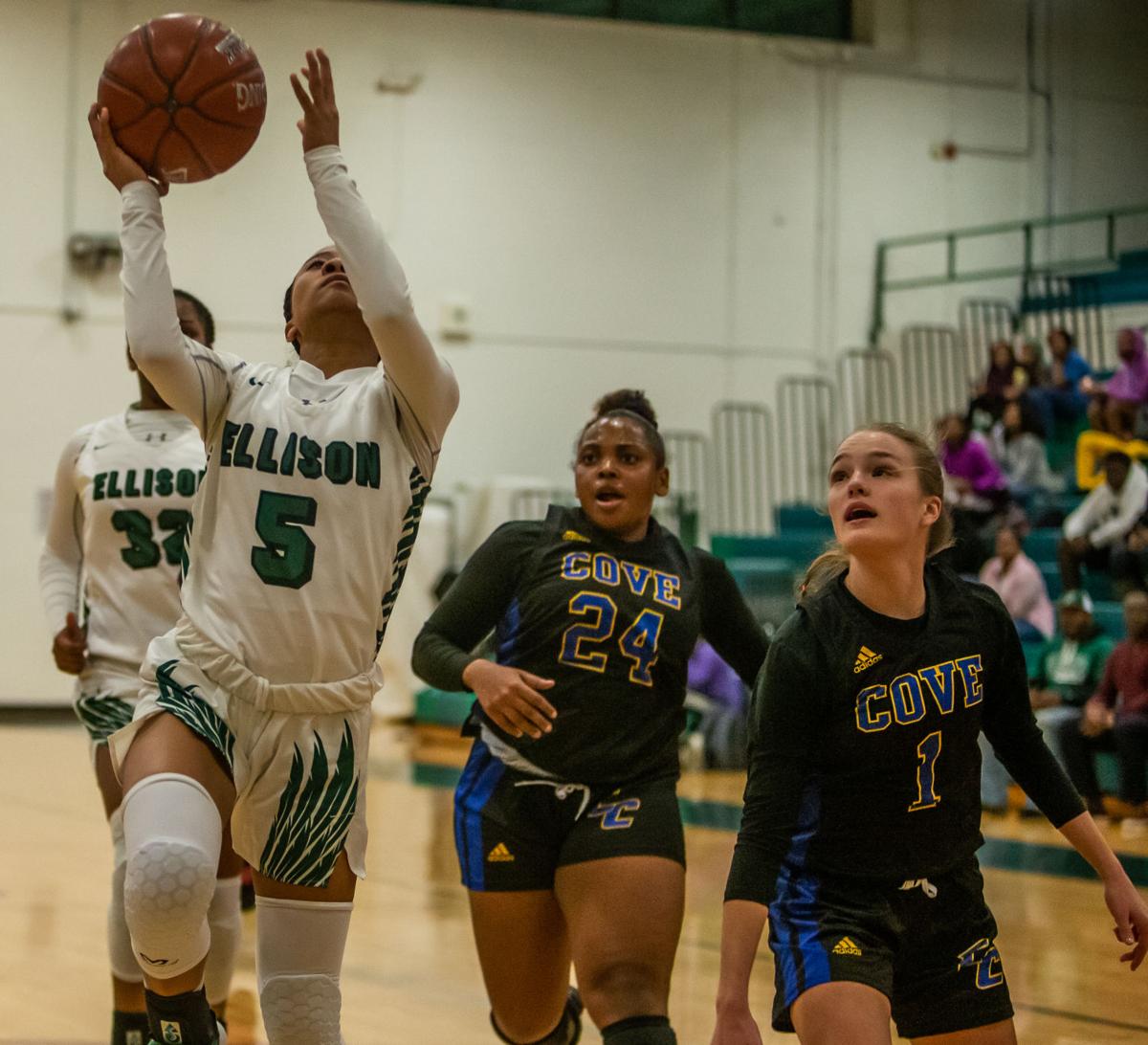 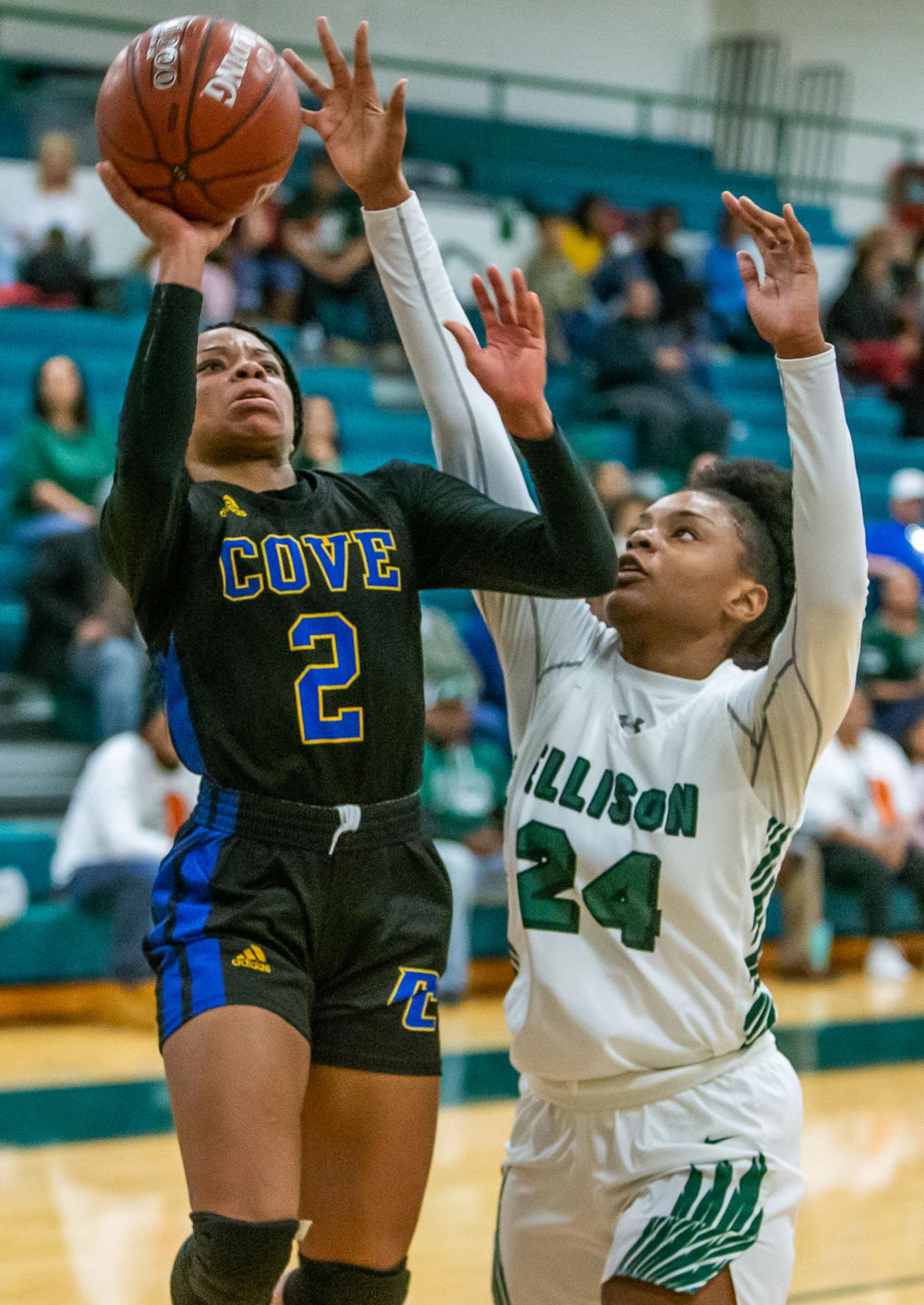 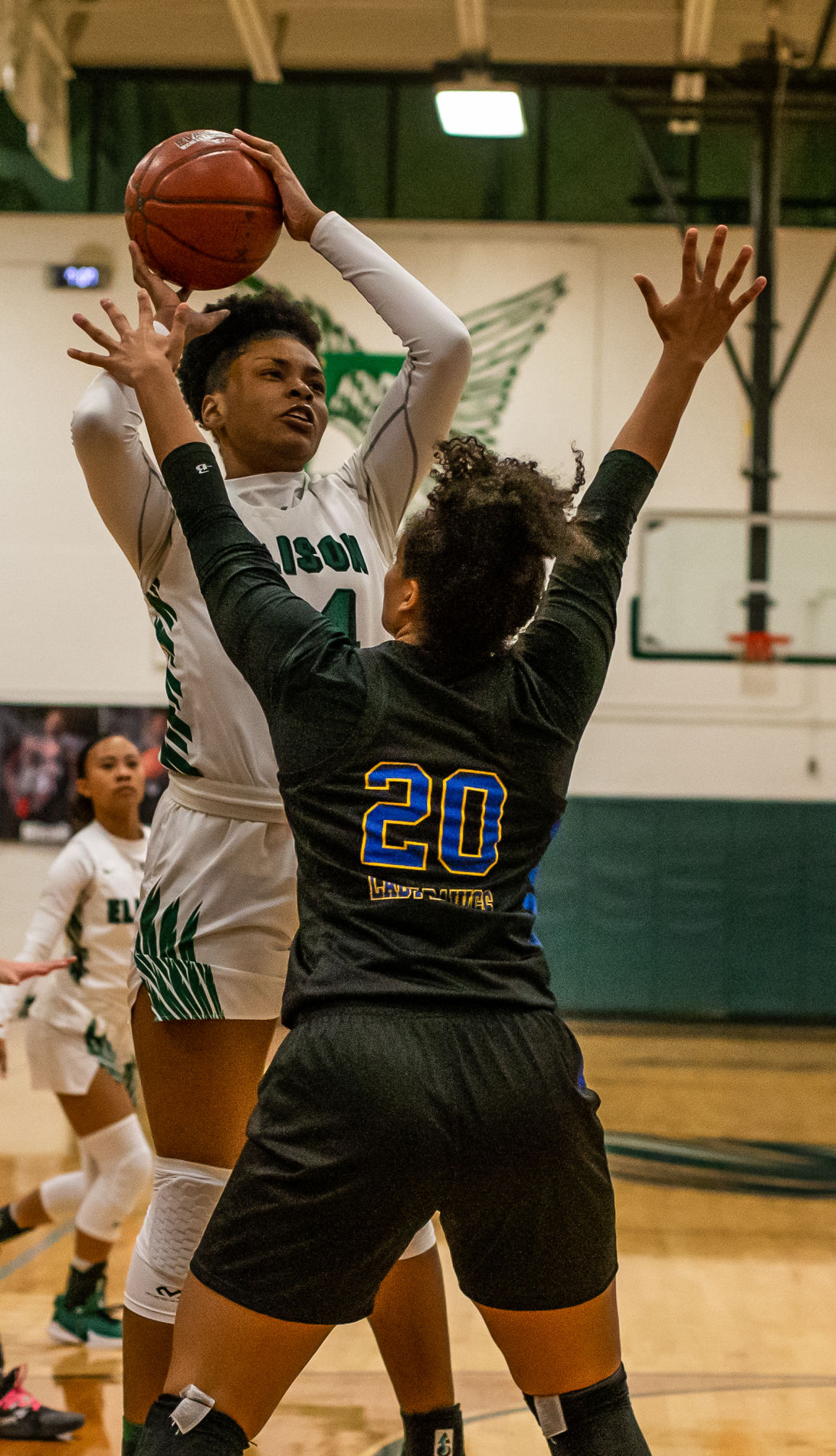 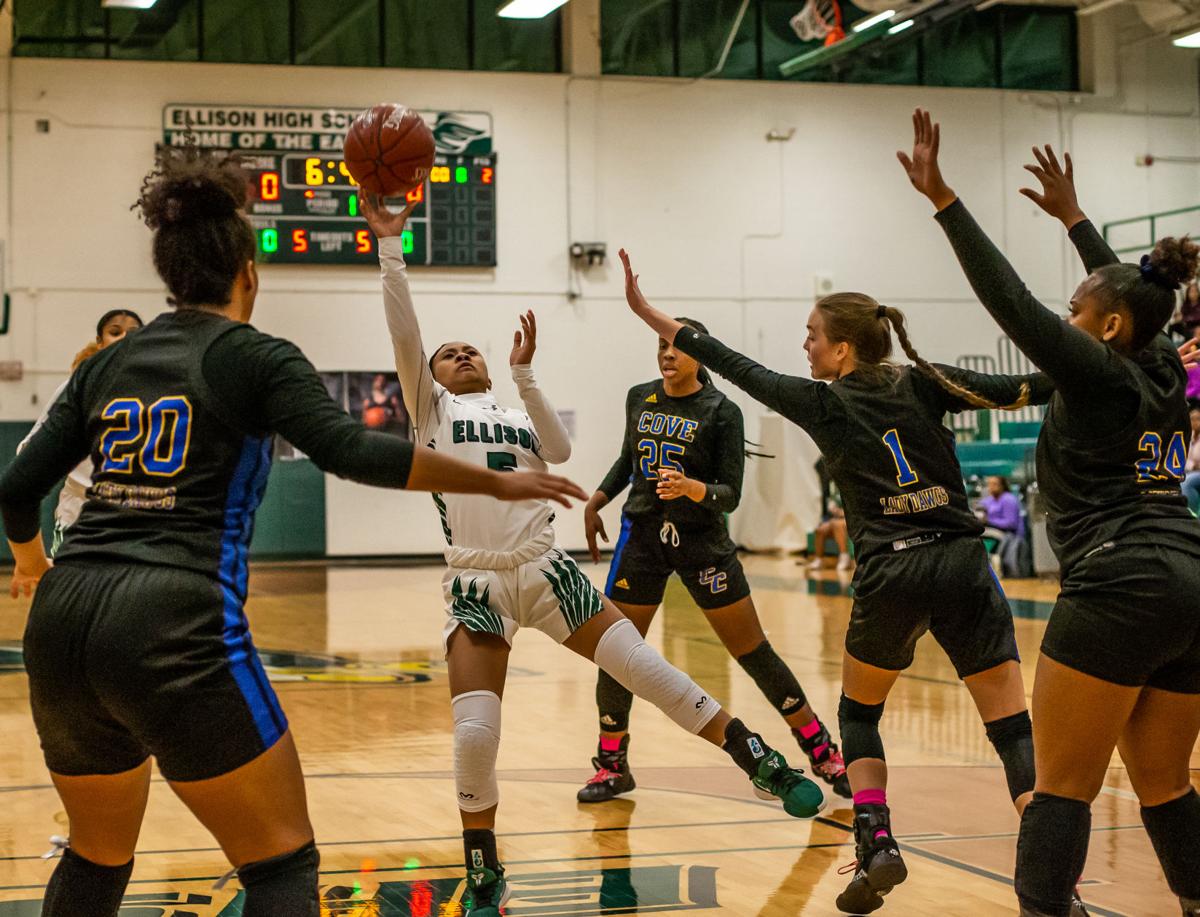 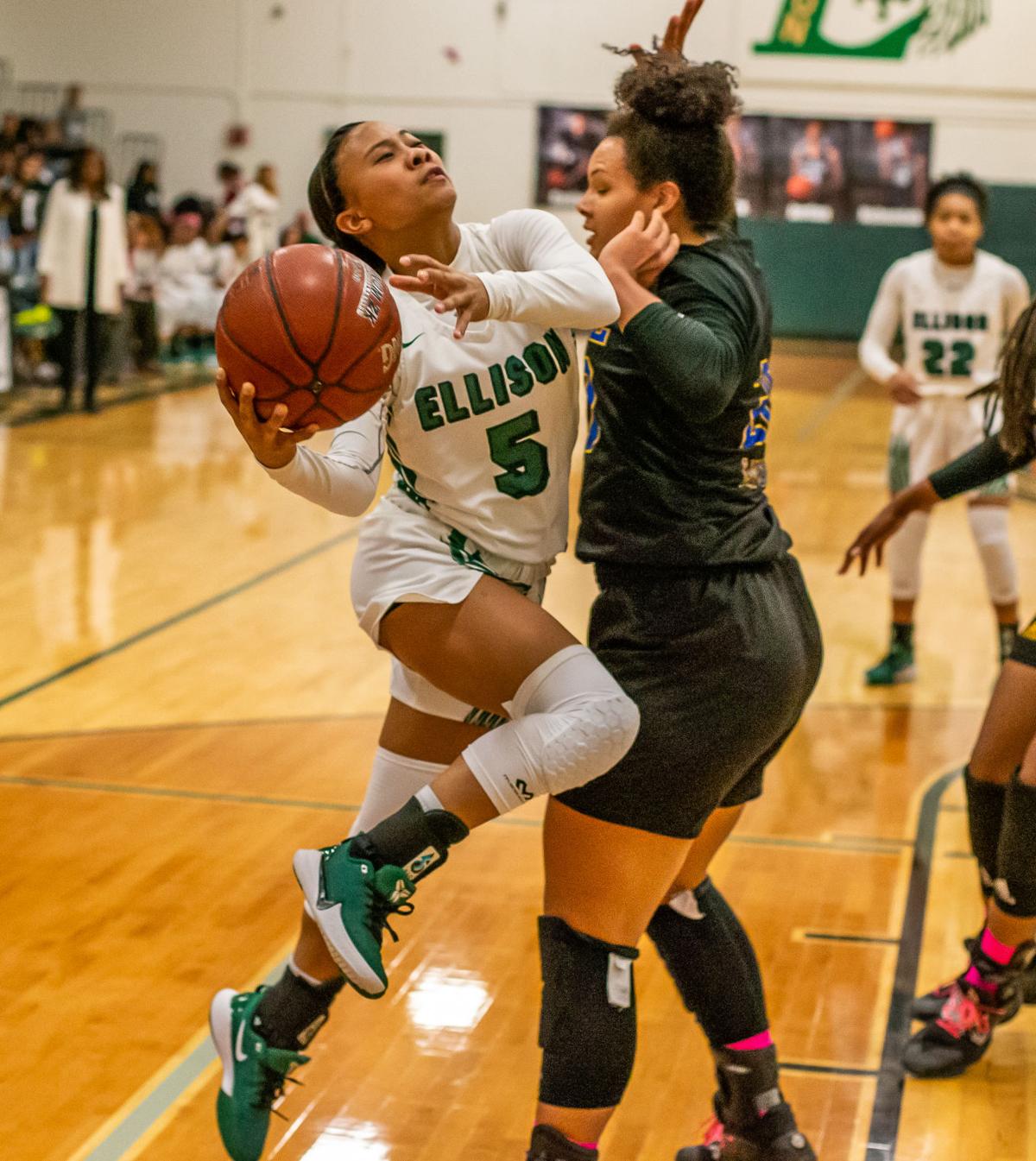 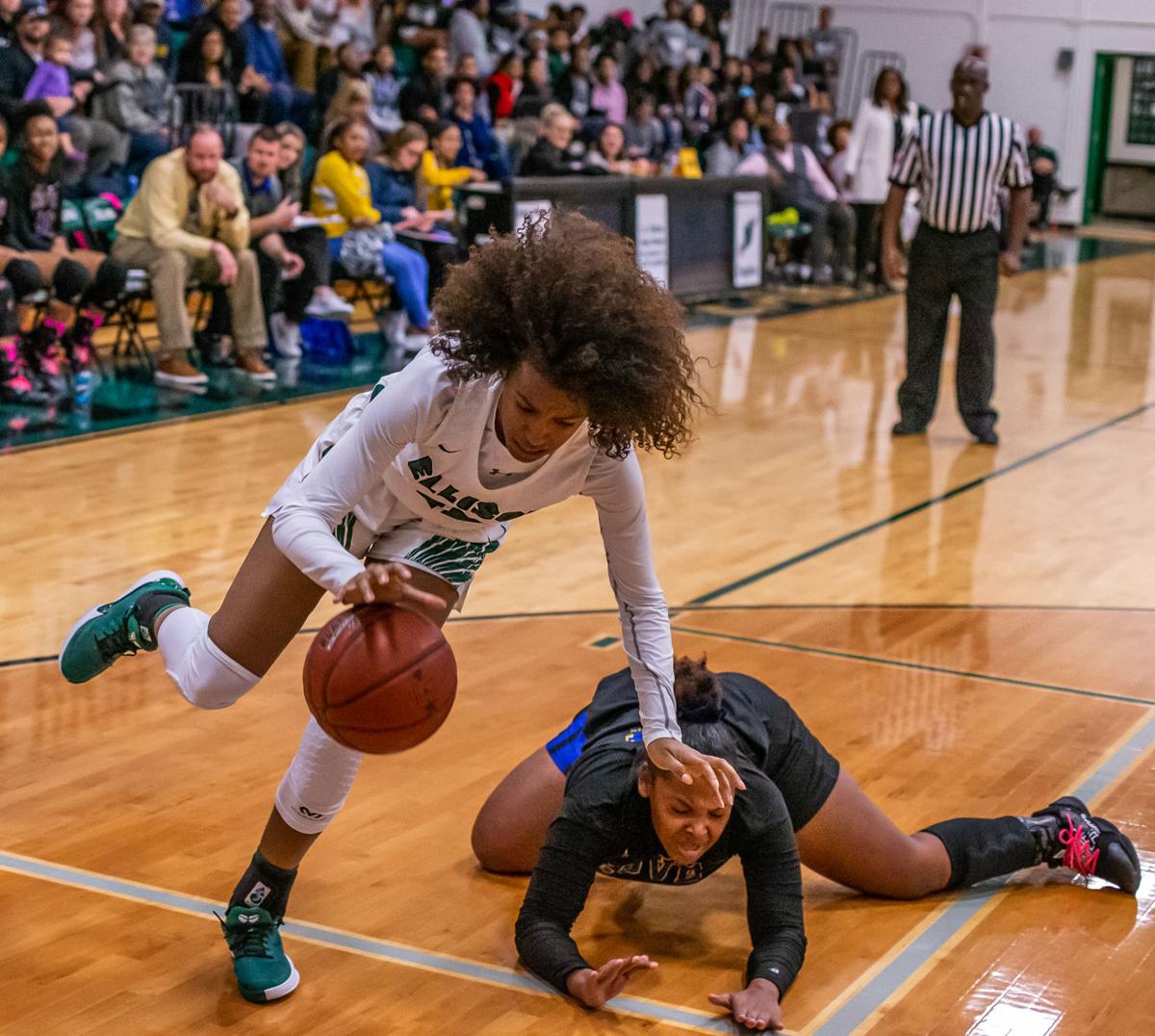 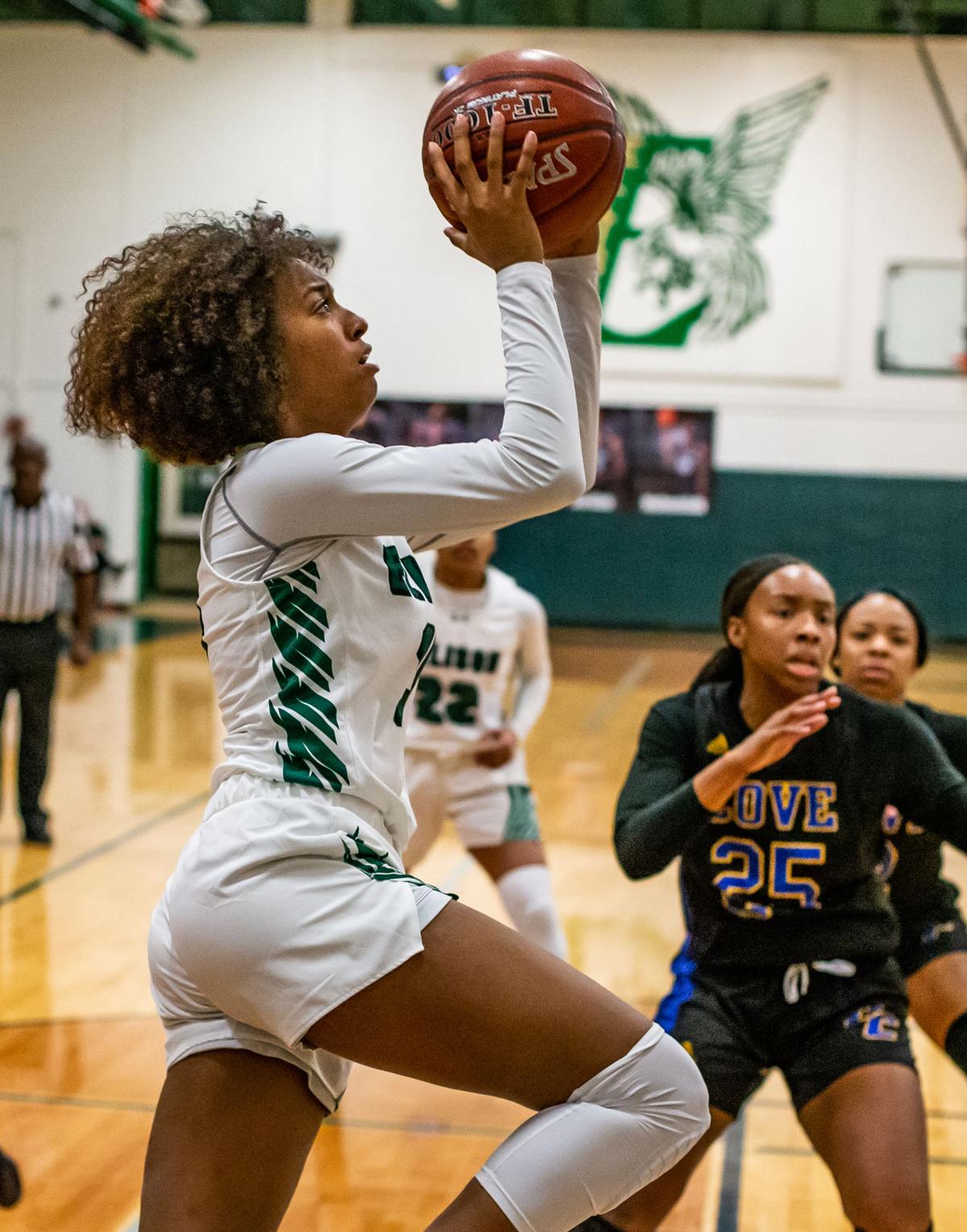 Ellison's Nylia Mobley (15) shoots a putback against Copperas Cove on Tuesday at Ellison. 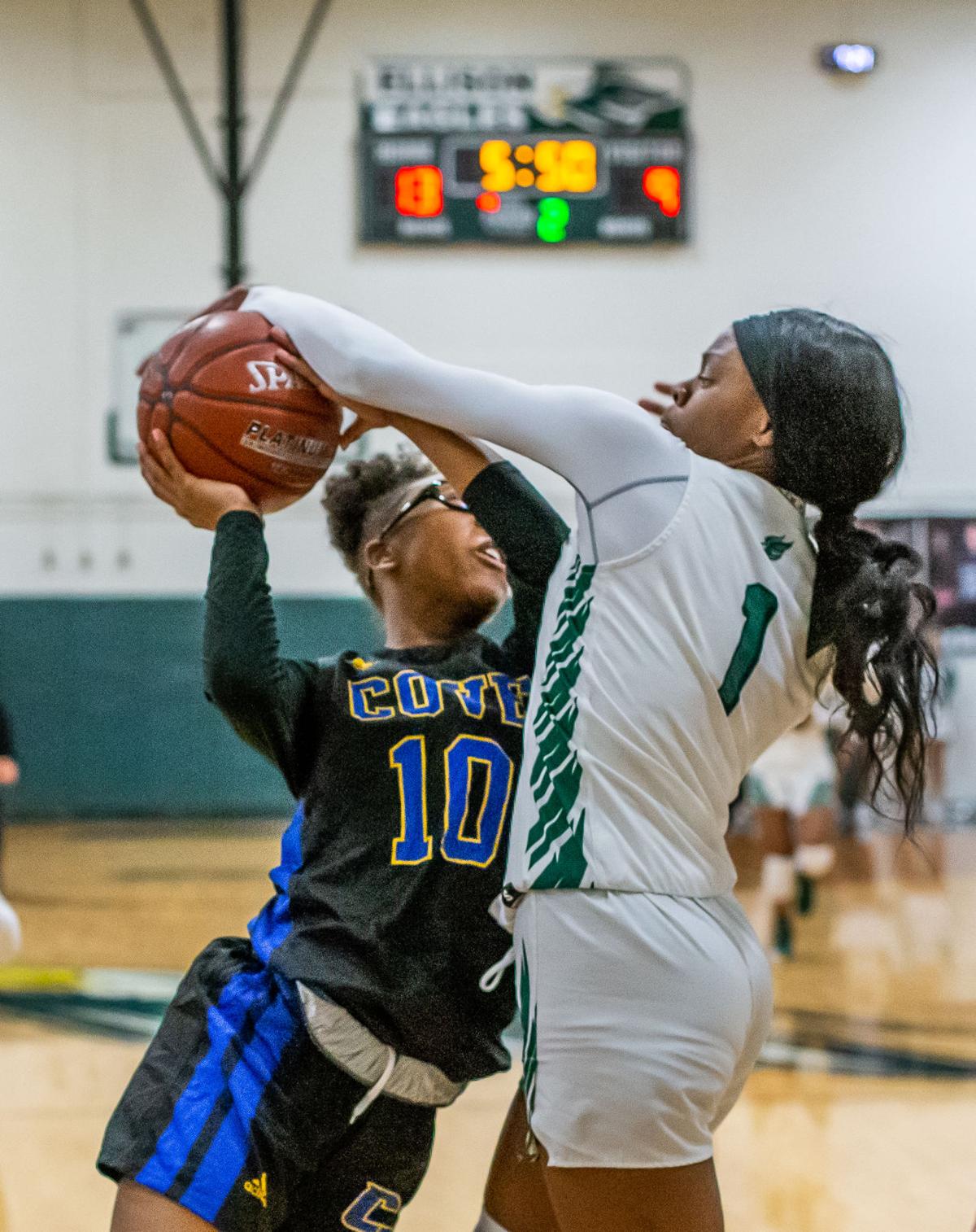 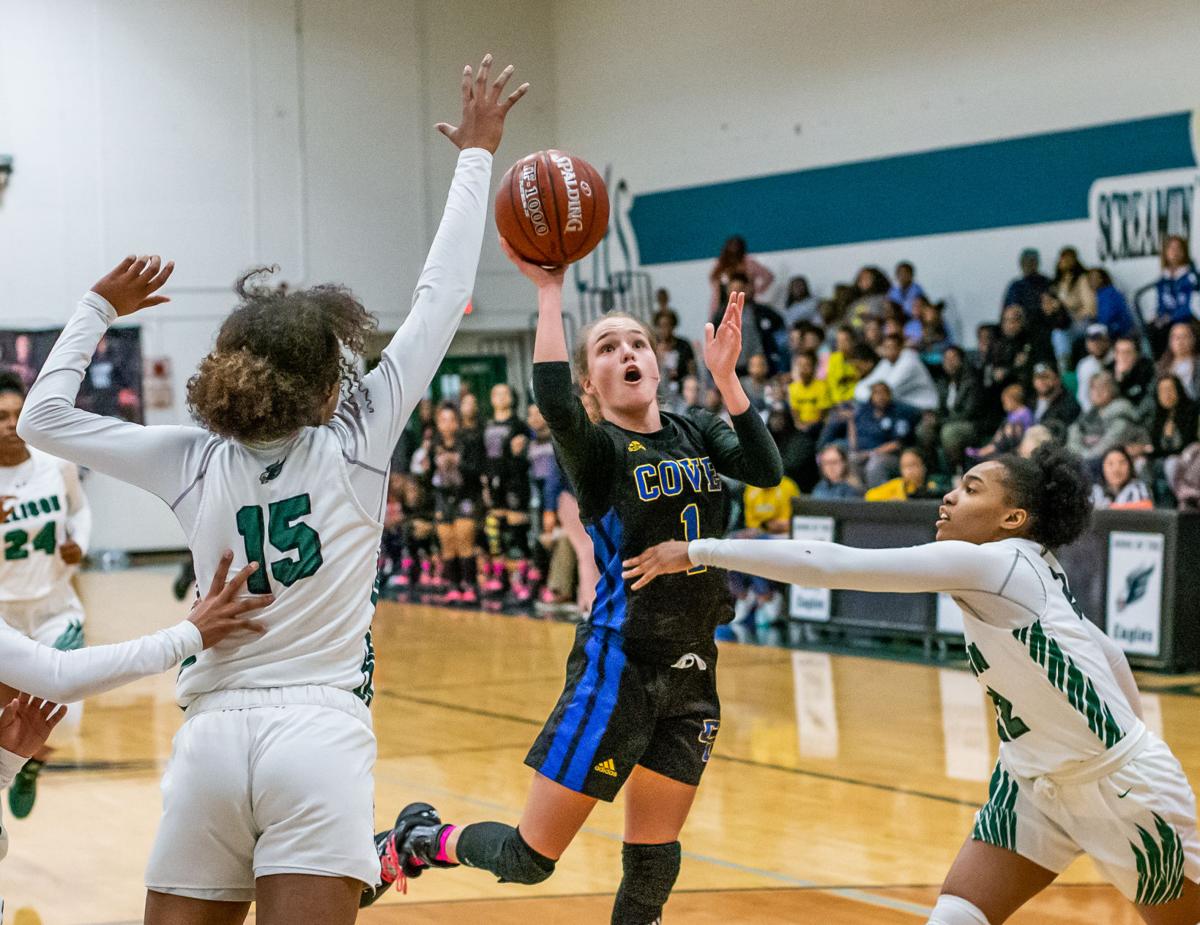 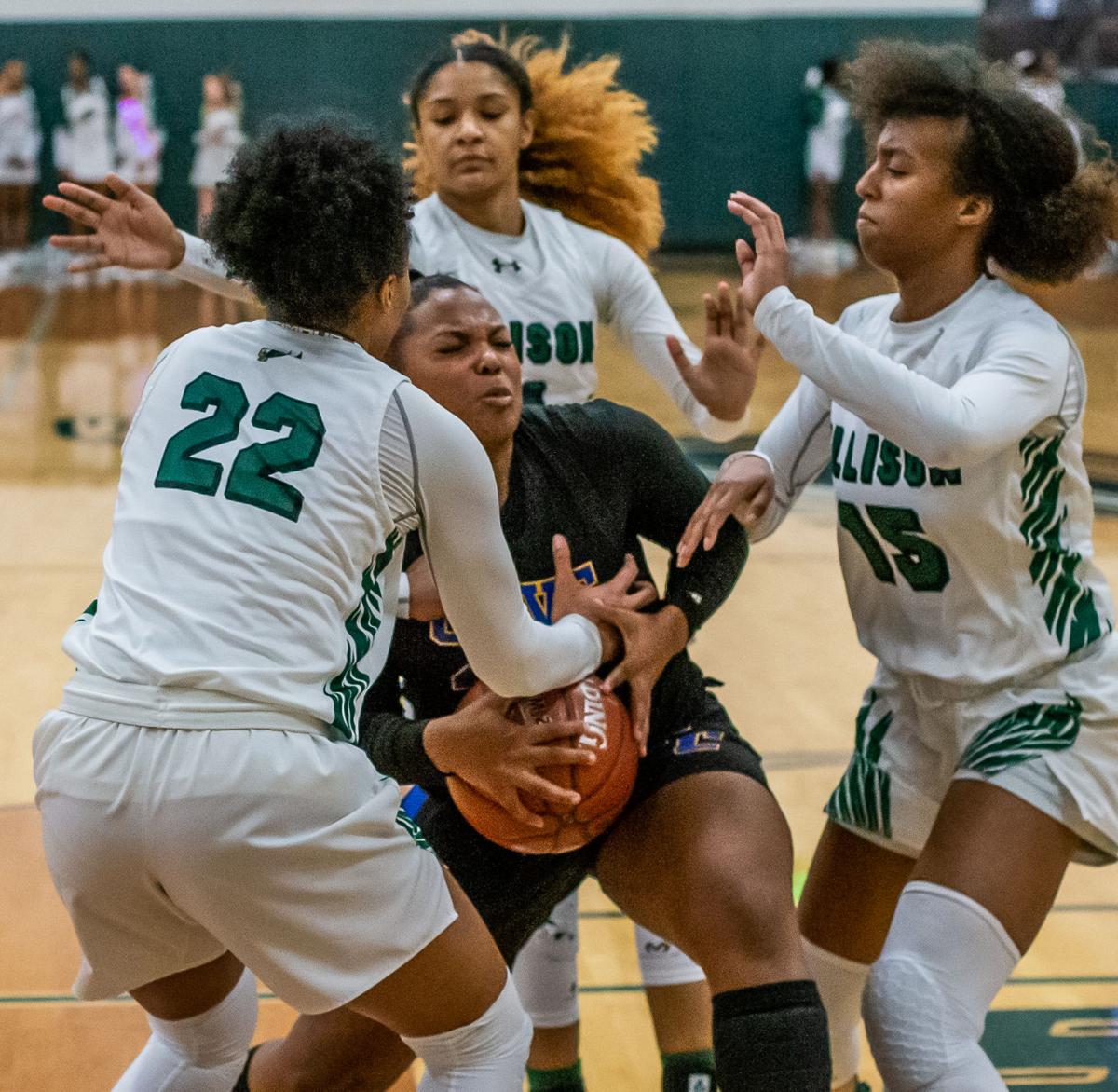 Copperas Cove’s Deja Chapman, middle, is surrounded by Ellison defenders, including Le’ondria Ford (22) and Nylia Mobley (15) on Tuesday at Ellison. 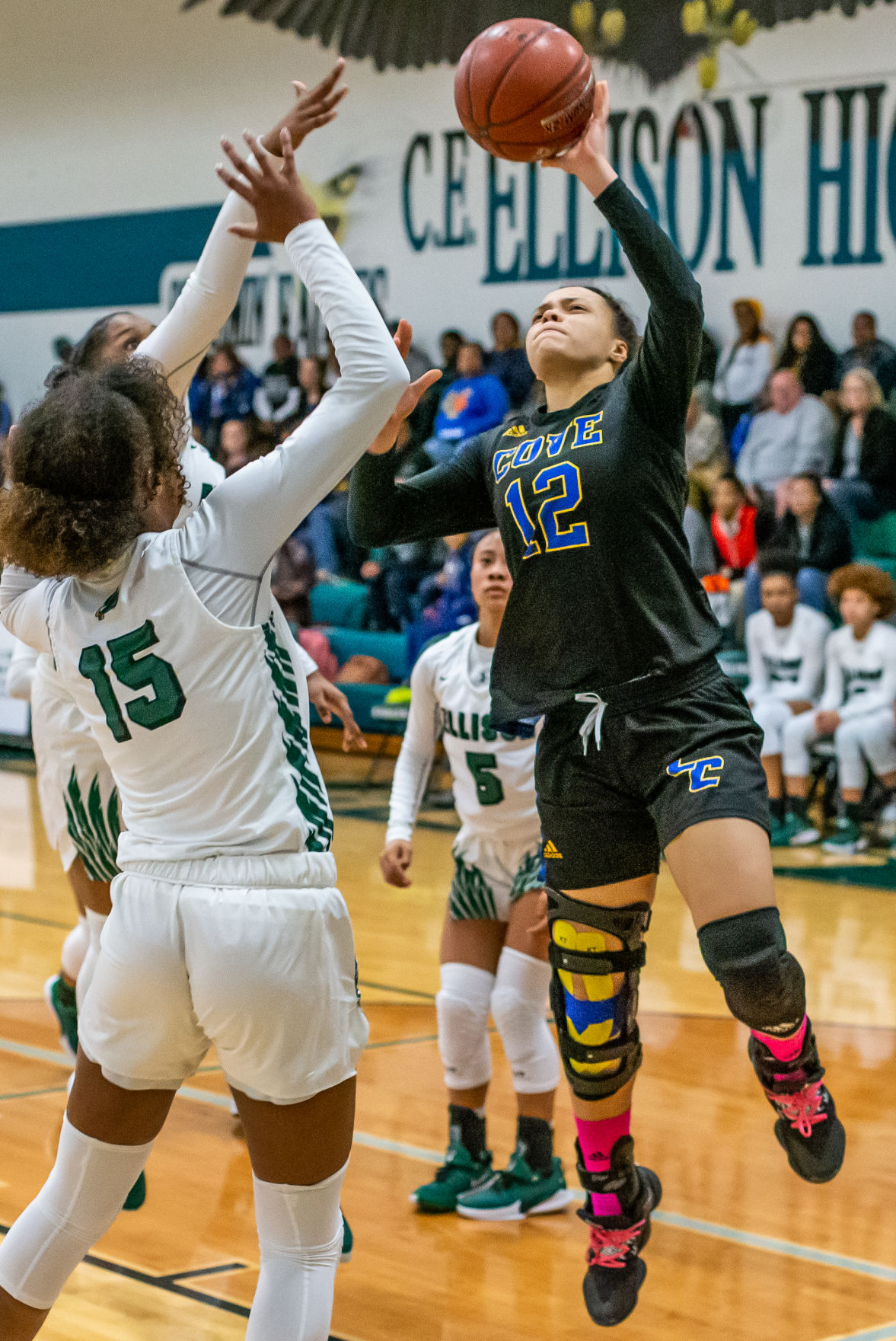 Copperas Cove’s LiVonna Wallace (2) drives against Ellison’s Arrianna Faulks to get to the baseline on Tuesday at Ellison High School.

Ellison's Arrianna Faulks (4) looks to drive into the lane as Copperas Cove's Leah Powell (25) and Kaysha McCloud (20) defend on Tuesday at Ellison.

Ellison's Nylia Mobley (15) shoots a putback against Copperas Cove on Tuesday at Ellison.

Copperas Cove’s Deja Chapman, middle, is surrounded by Ellison defenders, including Le’ondria Ford (22) and Nylia Mobley (15) on Tuesday at Ellison.

Sherry McKinnon feared an offensive letdown, and she was correct.

On the heels of upsetting then-Class 6A No. 16 Waco Midway 52-32 on Friday, Ellison was elevated into the state rankings, landing at No. 23 in Monday’s poll.

The result also set up a potential battle for first place in the District 12-6A race against Harker Heights on Friday, but first, the Lady Eagles needed to carry the momentum through Tuesday’s encounter with Copperas Cove.

It would not be easy, though.

After making five shots in the first quarter, Ellison was limited to just five field goals for the duration of the contest, but the Lady Eagles found other ways to win, connecting on 13 of 16 free throws in the fourth quarter en route to a 37-29 victory.

While the team produced a win, Ellison’s head coach was forced to live out her biggest worry in the process.

“I was concerned,” McKinnon said, “because we played a great game at Midway, and I thought there might be a little hangover, but the girls fought to get this win.

“Now, hopefully we regain our focus.”

Lady Eagles senior Arrianna Faulks made a 3-pointer to open the scoring, but the Lady Bulldawgs responded with nine unanswered points to take control before Ellison rebounded and took an 11-9 advantage into the second quarter.

The teams went into halftime tied 16-16 after combining to make four shots in the period, and despite holding Copperas Cove to just one point in the third quarter, the Lady Eagles could not take advantage, posting a mere six points themselves.

Lady Bulldawgs guard A’Zariah Knotts’ layup pulled Copperas Cove (21-8, 6-5) within three points, 24-21, but the Lady Eagles answered as Deyanna Reed made a baseline layup. It was Ellison’s last field goal of the game.

The Lady Eagles made 11 of 14 free throws during the duration of the period to pull away with Alina Simon (7-8 FT) and Evelyn Lorenzo (4 of 4 FT) combining to account for the remainder of their team’s points.

“It’s pressure,” Lorenzo said, “but I’m doing it for my team. They always have my back, so I want to have theirs as well.

“We just had to take advantage once they were in the bonus.”

The performances helped ruin a strong showing from Copperas Cove post Leah Powell, who recorded seven points, seven rebounds, three steals and two assists, and guard Madisen Honea, who made 3 of 5 3-pointers en route to a team-high 10 points, as the Lady Bulldawgs fell to just half a game ahead of idle Temple for fourth place.

Now, the Lady Eagles turn their attention toward Friday’s battle for the district lead at No. 16 Harker Heights, where it will most likely require a better offensive showing to escape with a win.

“We just have to keep playing no matter if we aren’t getting calls or shots aren’t falling,” Lorenzo said, “because we know we are all there for each other.

“I have confidence, and I know we can pull out the win if we play right.”

12-6A GIRLS SOCCER: Belton dominates early in 10-1 win over Shoemaker

BELTON — If goals were the key ingredients in some sort of secret potion that kept people warm, Belton would’ve made a bunch of bundled-up fan…