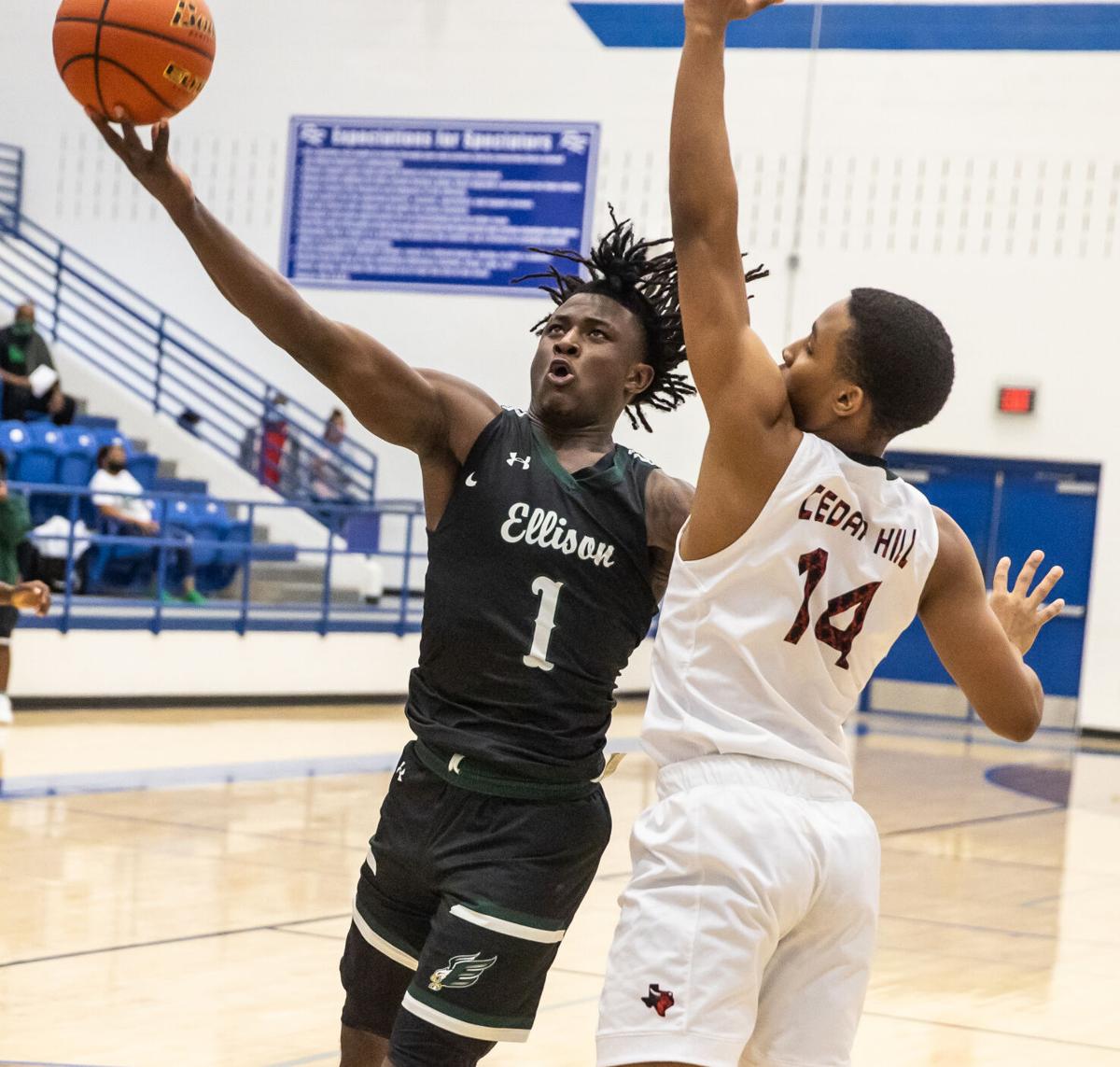 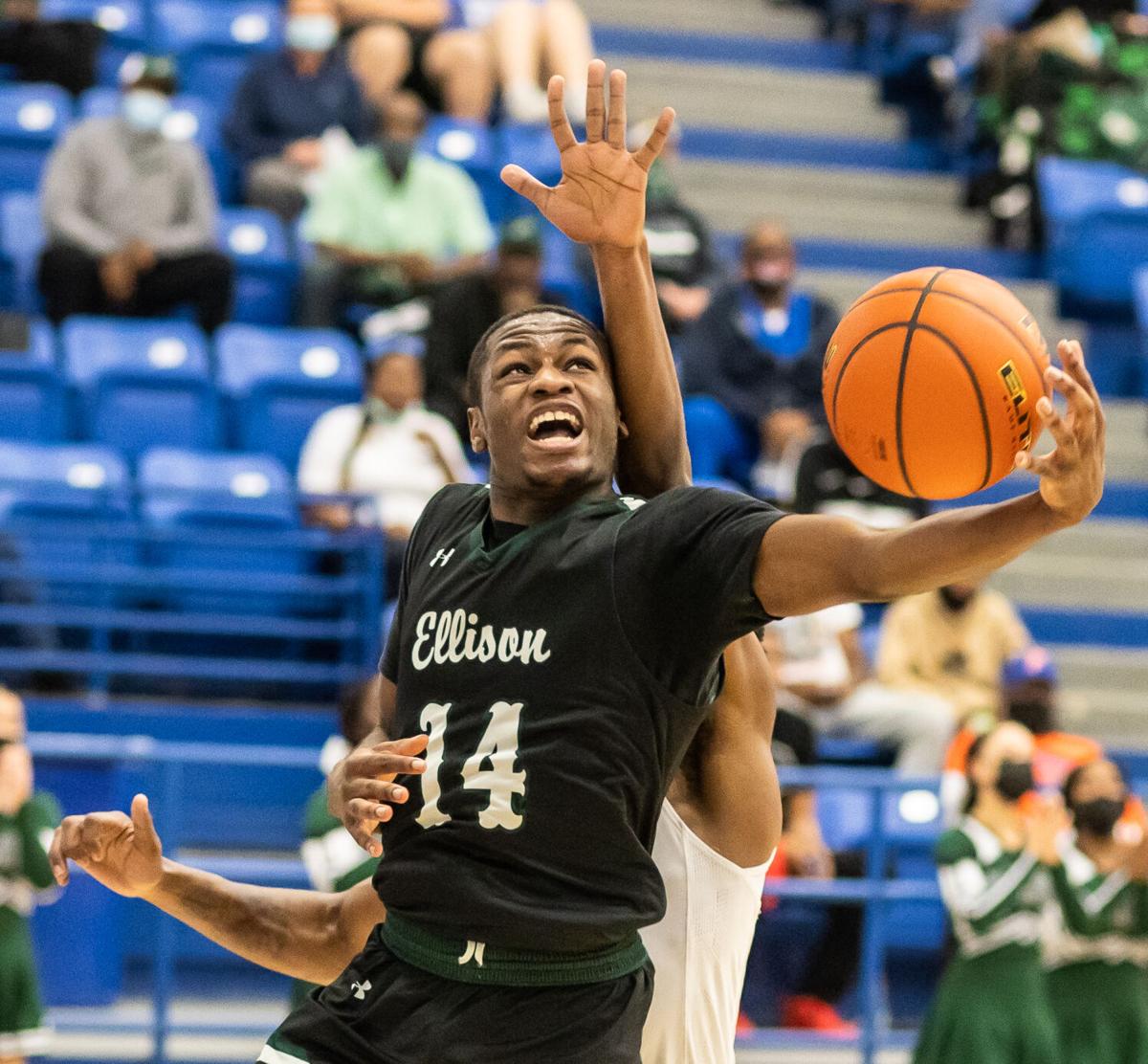 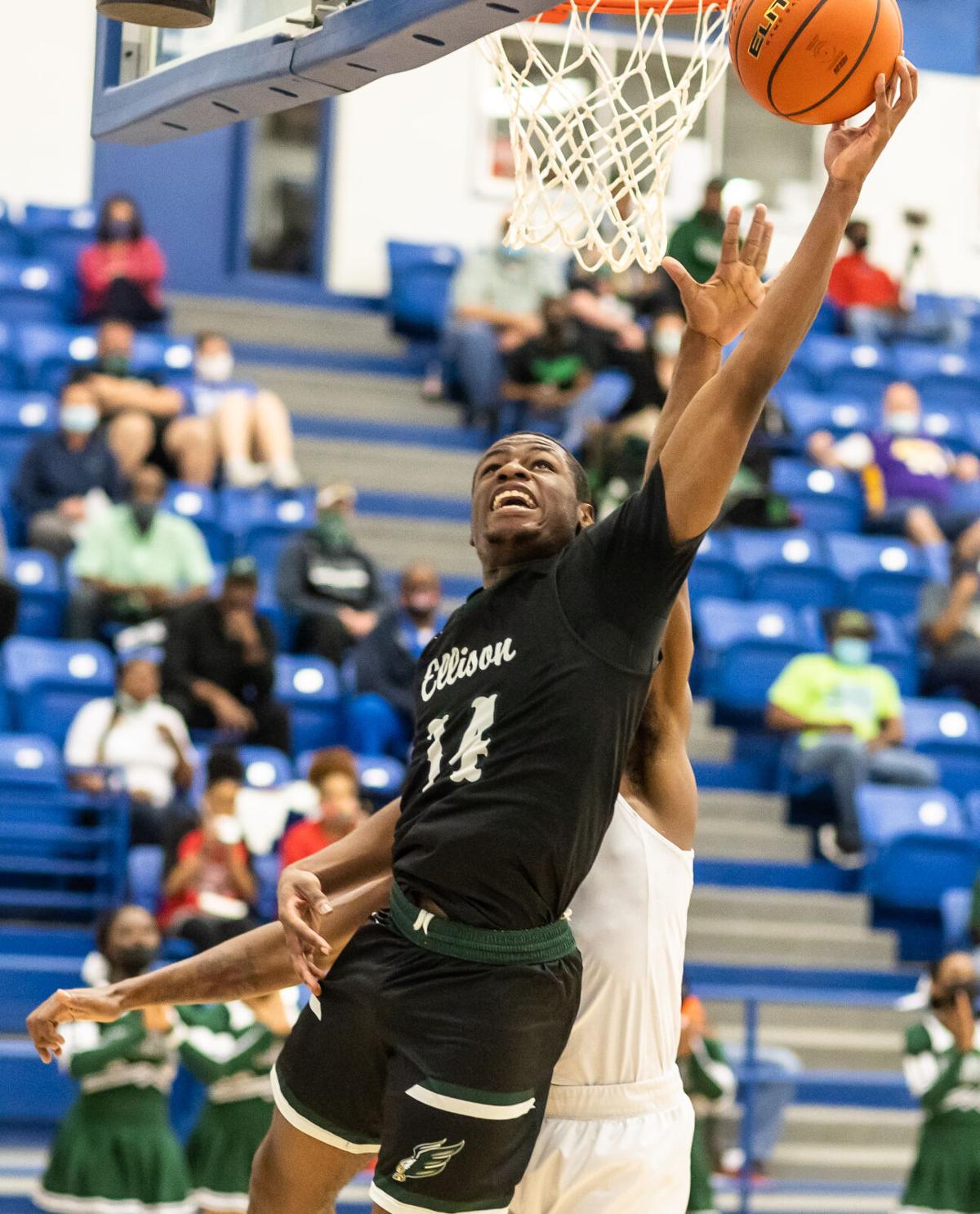 No. 9 Ellison's Trendon Stewart (14) shoots in front of a Cedar Hill defender in their bi-district playoff game at Robinson High School on Tuesday, February 23, 2021. 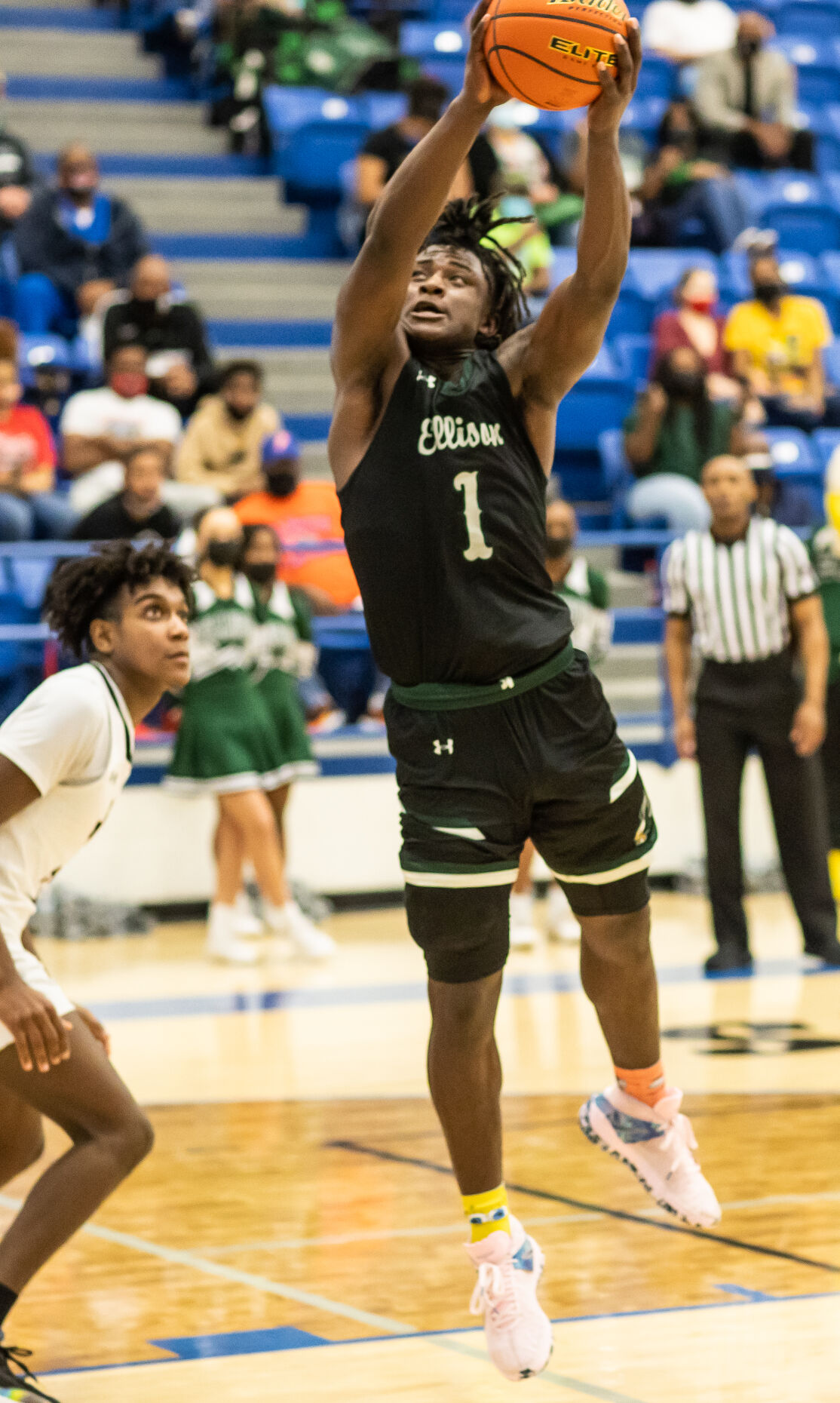 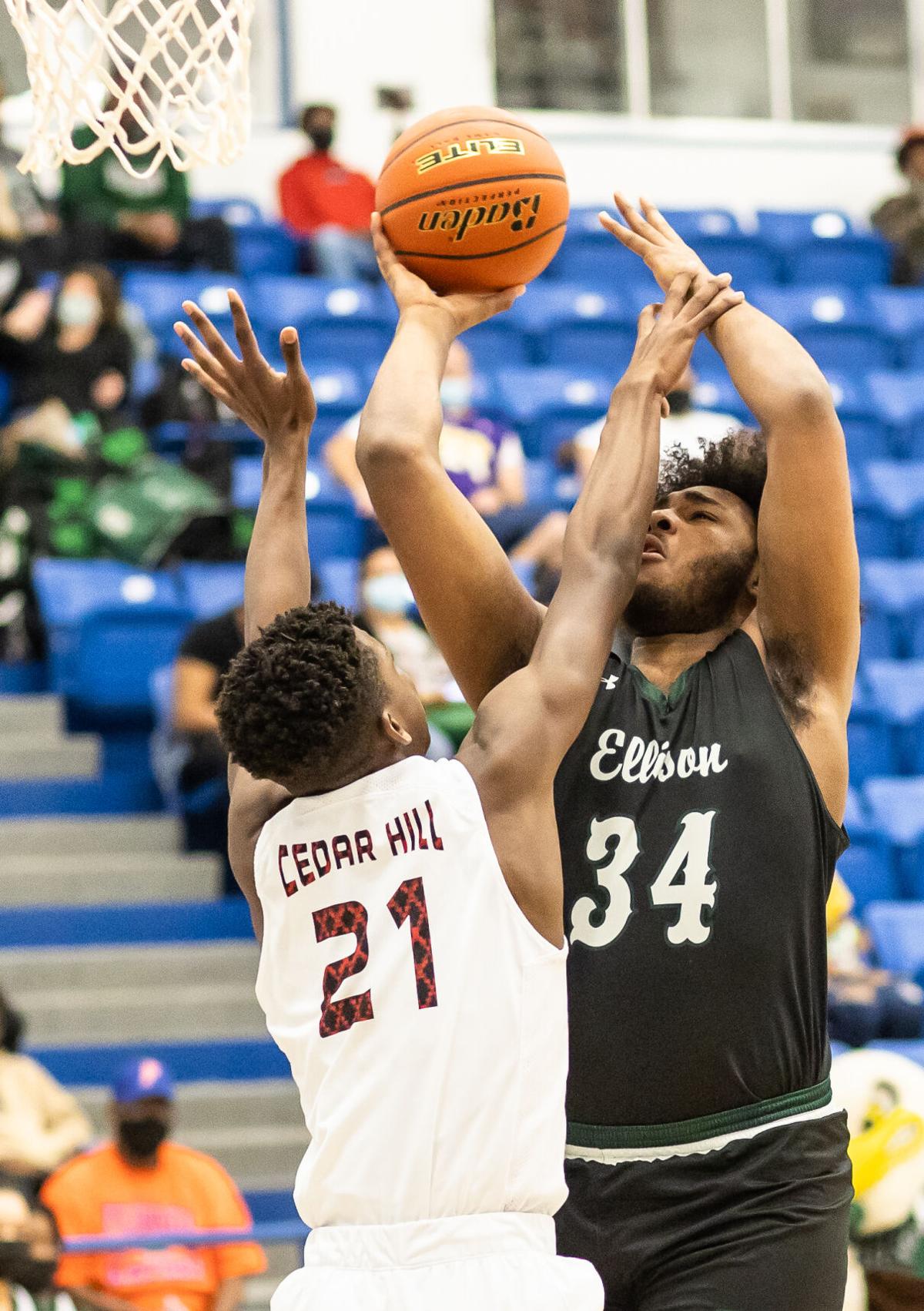 No. 9 Ellison's Dante Tutein (34) is fouled by Cedar Hill's Jeremy Watkins (21) in a bi-district playoff game at Robinson High School on Tuesday, February 23, 2021. 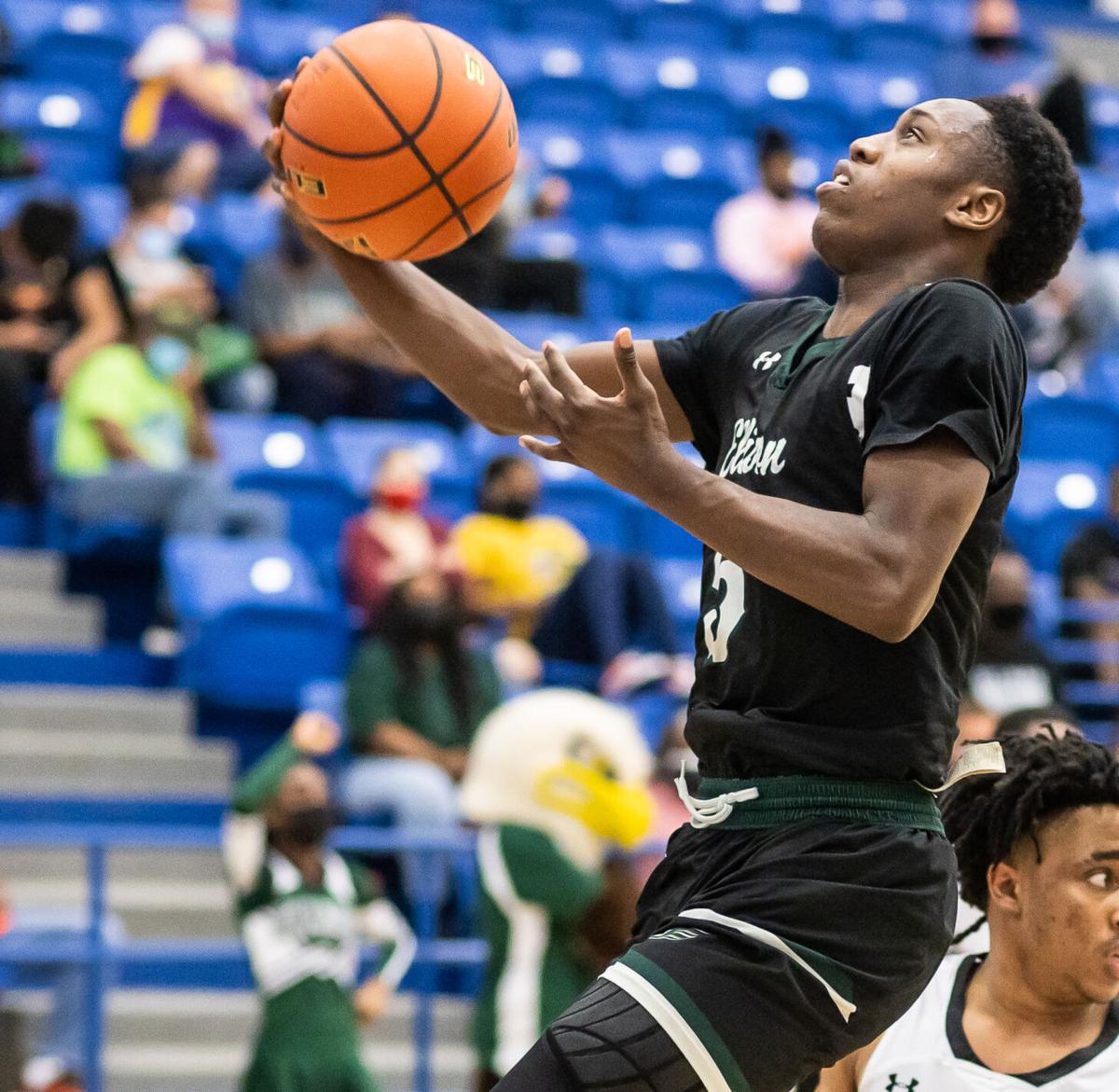 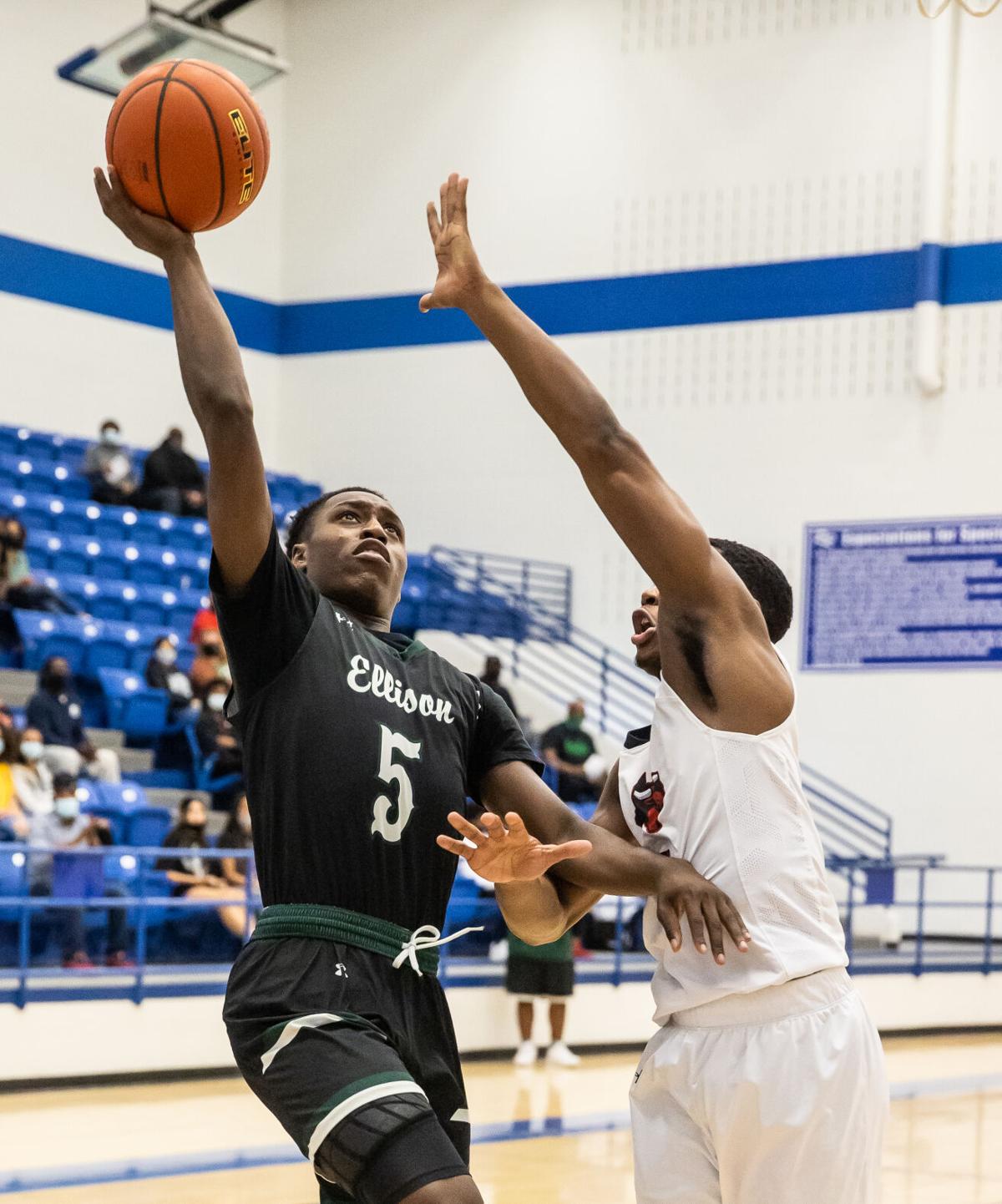 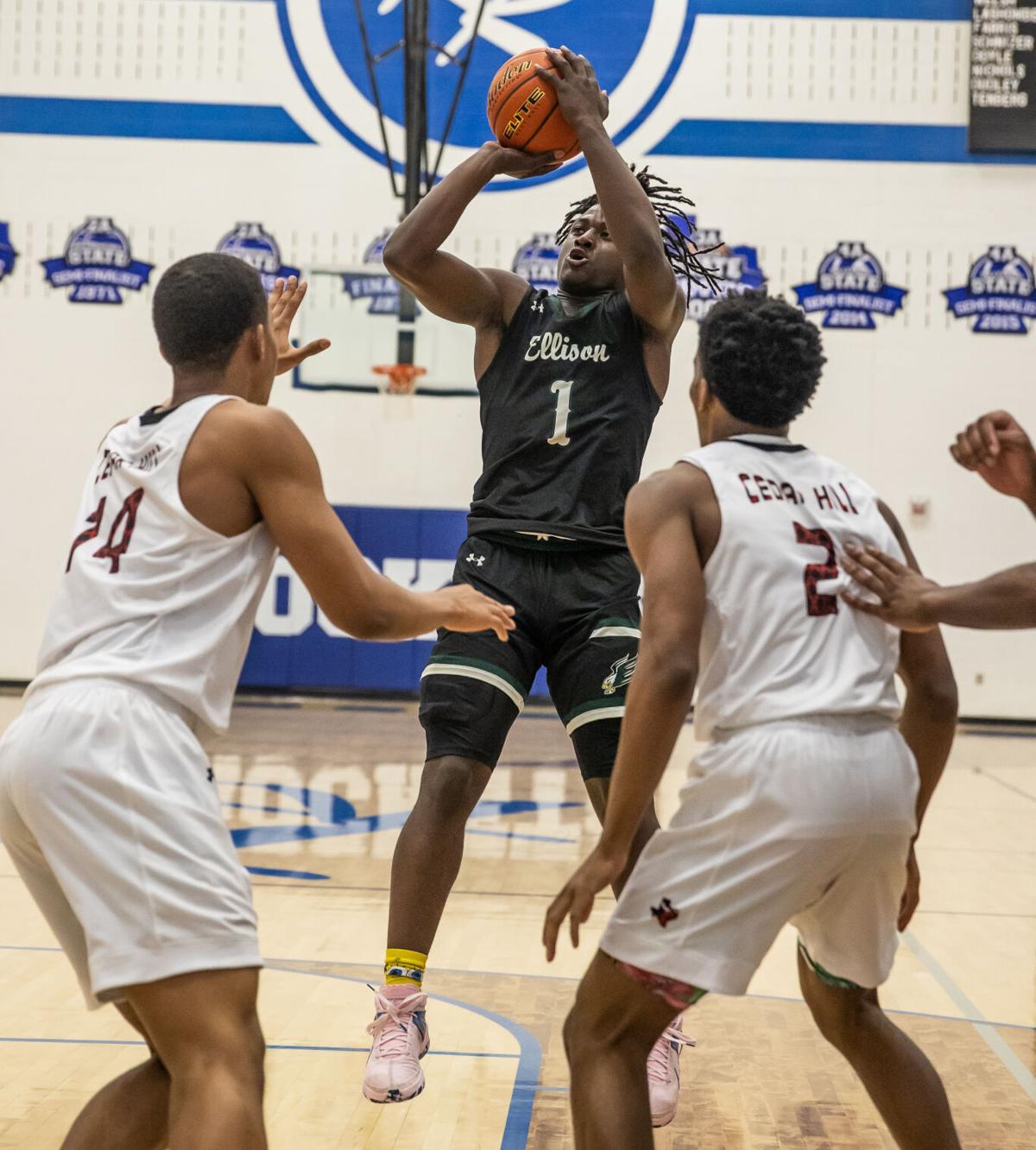 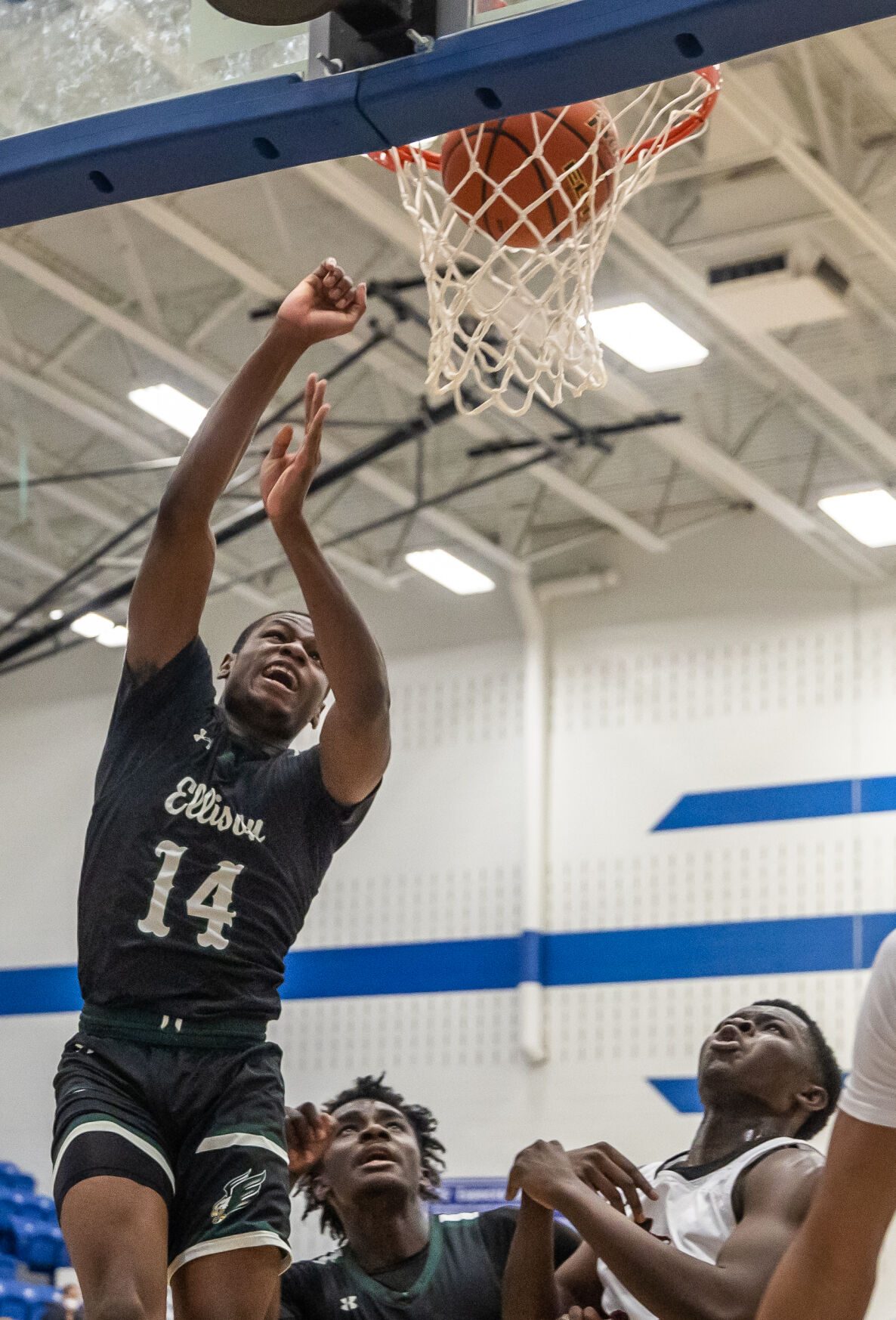 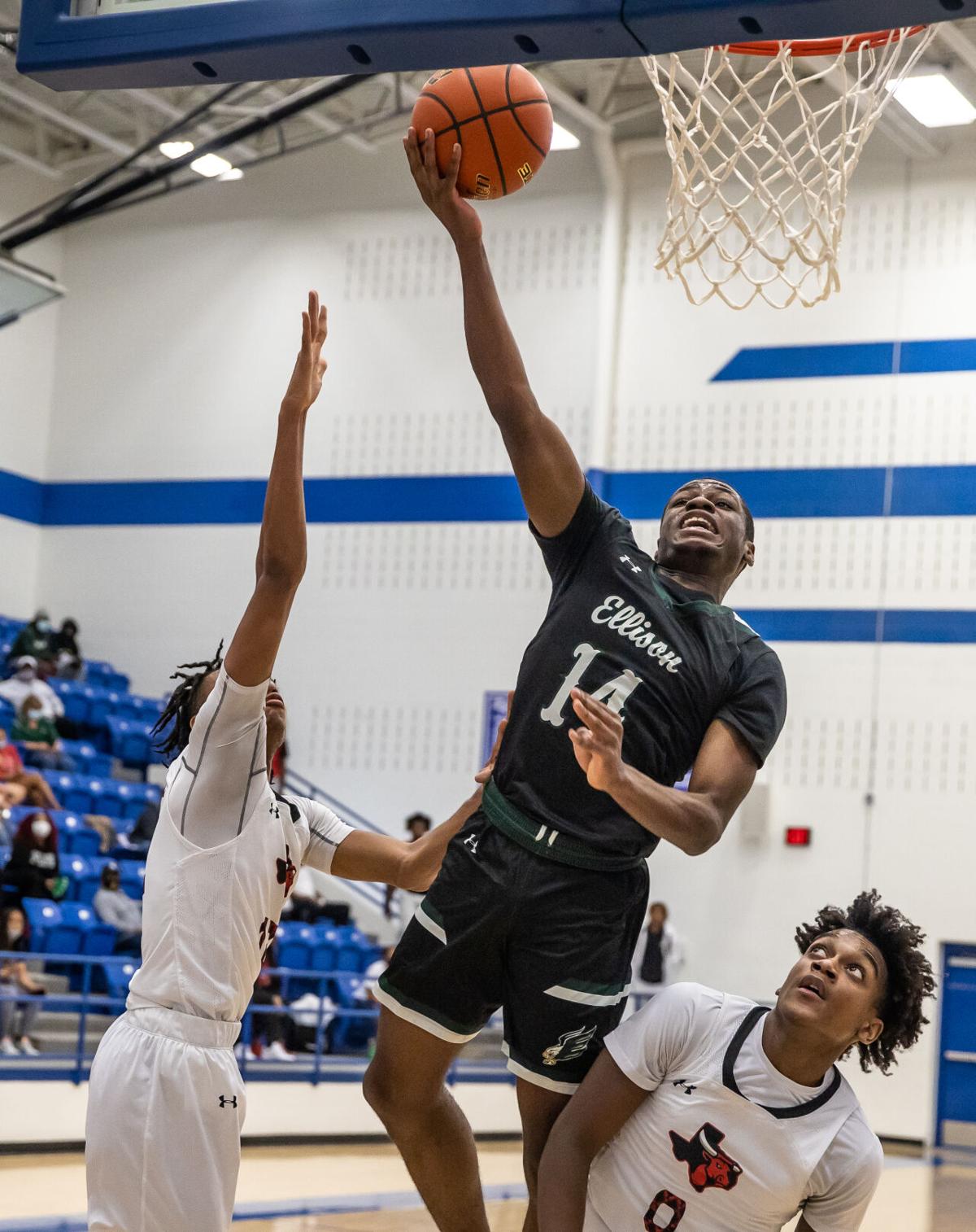 No. 9 Ellison's Trendon Stewart (14) shoots a layup between Cedar Hill defenders in a bi-district playoff game at Robinson High School on Tuesday, February 23, 2021. 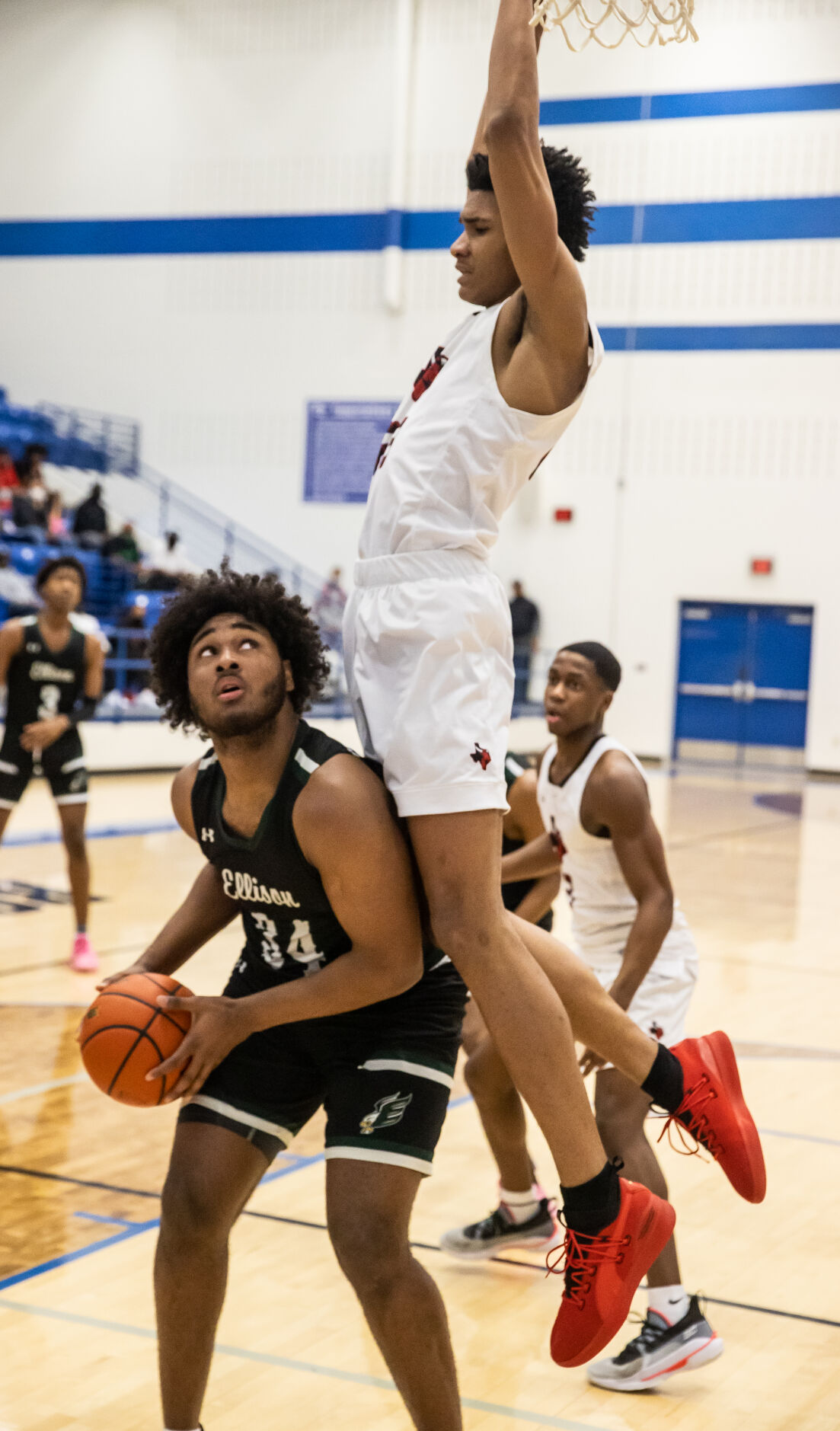 No. 9 Ellison's Trendon Stewart (14) shoots in front of a Cedar Hill defender in their bi-district playoff game at Robinson High School on Tuesday, February 23, 2021.

No. 9 Ellison's Dante Tutein (34) is fouled by Cedar Hill's Jeremy Watkins (21) in a bi-district playoff game at Robinson High School on Tuesday, February 23, 2021.

No. 9 Ellison's Trendon Stewart (14) shoots a layup between Cedar Hill defenders in a bi-district playoff game at Robinson High School on Tuesday, February 23, 2021.

The Class 6A No. 9 Eagles took their first step toward their goal of winning a state title Tuesday, dominating Cedar Hill 79-57 in the bi-district round.

Ellison was on point early, winning the first quarter by nine points, 21-12, and the Eagles never slowed down.

Paced by sophomore guard Jamyron Keller, who posted a game-high 24 points, Ellison widened the gap to 19 points, 42-23, by halftime before outscoring the Longhorns 25-8 in the third period to assume complete control.

Following the victory, Eagles head coach Alberto Jones Jr. admitted his players are on a mission.

“We got so close last year,” he said, “and so, a lot of these guys have been waiting for this moment.

“So, they came out focused and playing hard, and that is always the key. If you play hard, and you are a good player, then that gives you a chance.”

And Ellison showed its potential against Cedar Hill (14-10).

Along with Keller’s offense, guard Jayce Wright finished with 10 points, including six in the first quarter, while teammate Khris Wilkerson, a sophomore, added a dozen points thanks in part to a trio of 3-pointers in the third quarter.

“This is a close-knit group,” Jones said, “and everyone knows what each other can do. Nobody is trying to do too much, and they are all cheering for one another.

Ranked third in Class 6A, Ellison fell one game shy of its intended destination — the state tournament — last season, losing to Wylie by eight points, 50-42, in the Region II championship behind the most successful trio in program history.

Led by seniors Shamir Bogues, Nehemiah Nuckolls and Matthias Nero, the group amassed more victories in a three-year span (94) than any other Eagles’ group.

But the current class is not far off.

One year later, the impressive benchmark sits just out of reach for current senior starters Javon Walker, Wright, Trendon Stewart and Deondra Thomas, who, after beating Cedar Hill, own a combined record of 88-14.

Along with the current season, the group helped produce a 35-5 showing last year and went 27-8 in 2018-19, and should Ellison win the state title, the players would graduate with 93 victories to close their careers.

Sitting in third place are the 2018-19 seniors, including Chandler Sutton, Amir Davis and Keon Smith, who combined to deliver 87 wins.

The opportunity to eclipse the record was hindered by circumstances beyond their control as the Eagles, like the rest of the state, dealt with schedule constraints and alterations due to COVID-19 and, more recently, inclement weather.

It does not diminish the feat, though.

Heading into its area-round contest against Garland Naaman Forest, the current seniors own a winning percentage of .863, slightly higher than the previous class’ .839 average.

Now, Ellison (26-1) turns its attention toward raising the percentage even higher.

The Eagles are set to face the Rangers with a fifth consecutive trip to the regional quarterfinals on the line.

The game is set to be played Thursday at Italy with the winner most likely playing No. 1 Waxahachie. The Indians play Rockwall in the second round after defeating Belton 99-62 to open their playoff run.

“We went to watch Naaman Forest play,” Jones said, “and they’ve got a pretty good team. They’ve got a couple big guys, who are real athletic, and a good point guard.

Jayce Wright knew he would never play on the court again, so he made the most of it.