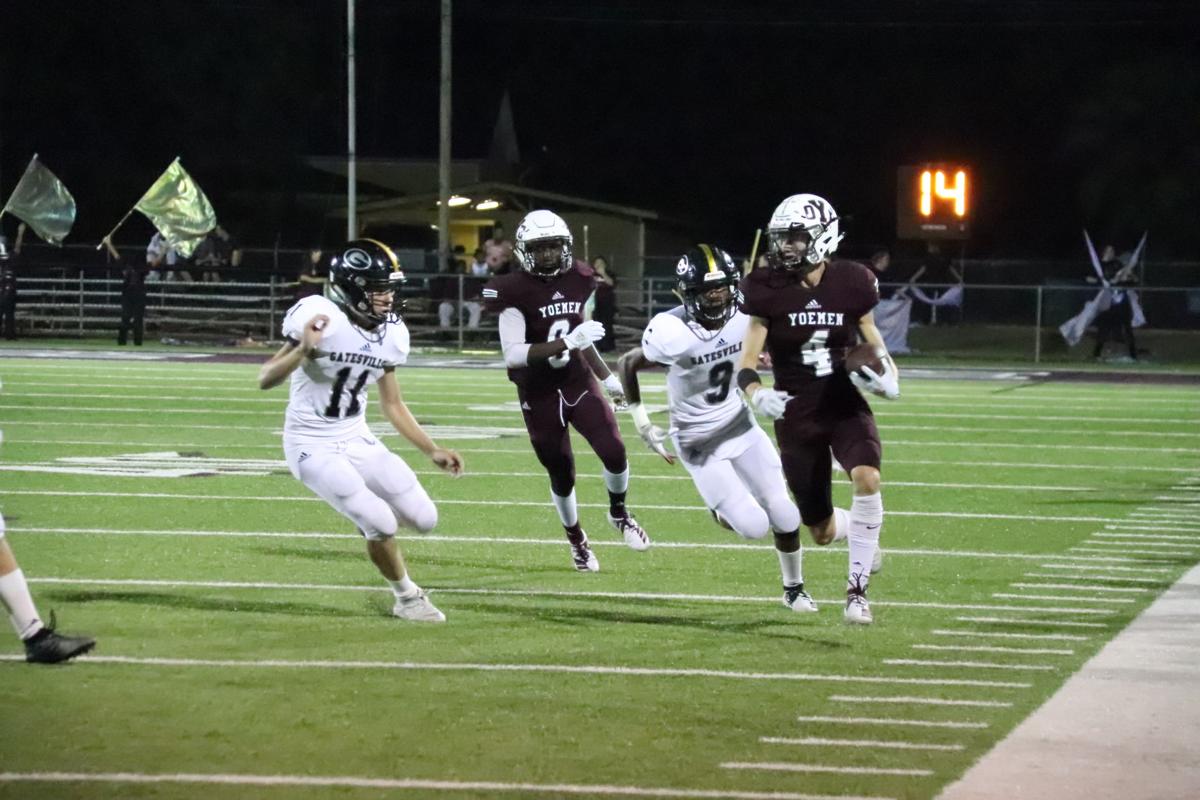 Cameron Yoe's Kobe Young (4) is chased by Gatesville's Jeremiah Fails (9) and Taylor Lee on a punt return Friday at Cameron. 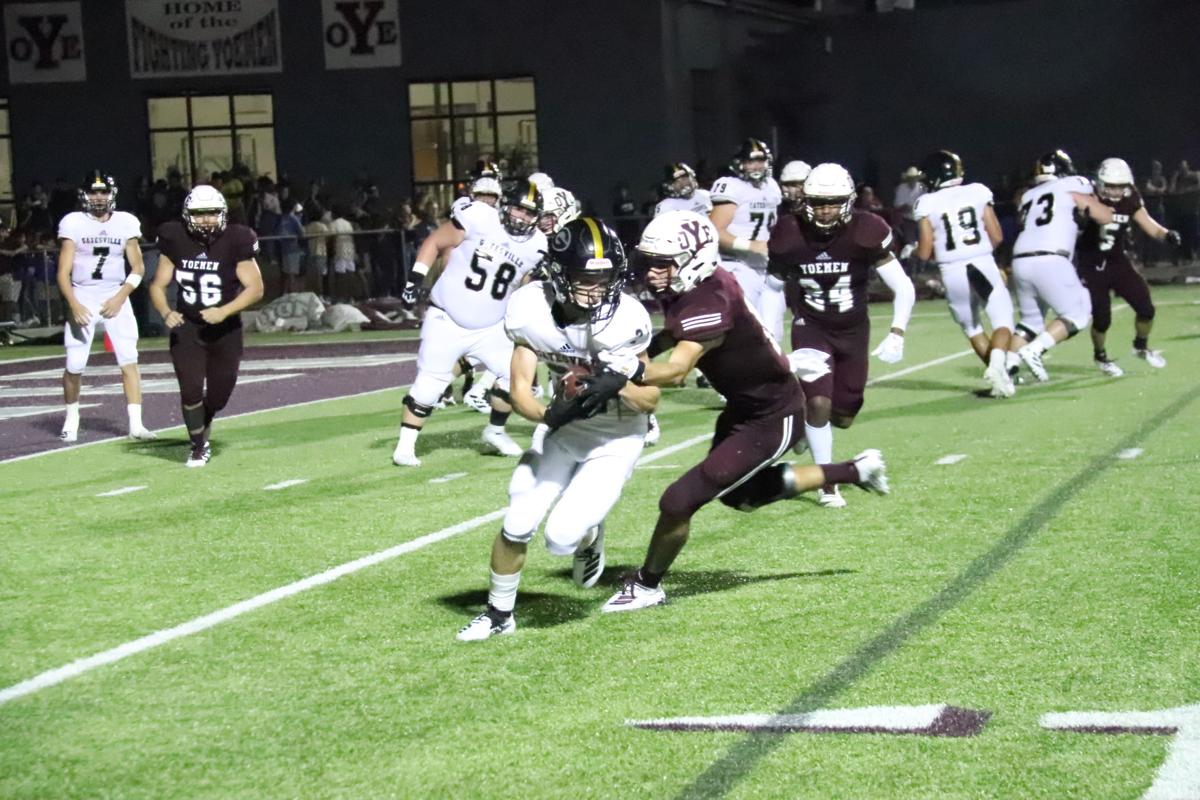 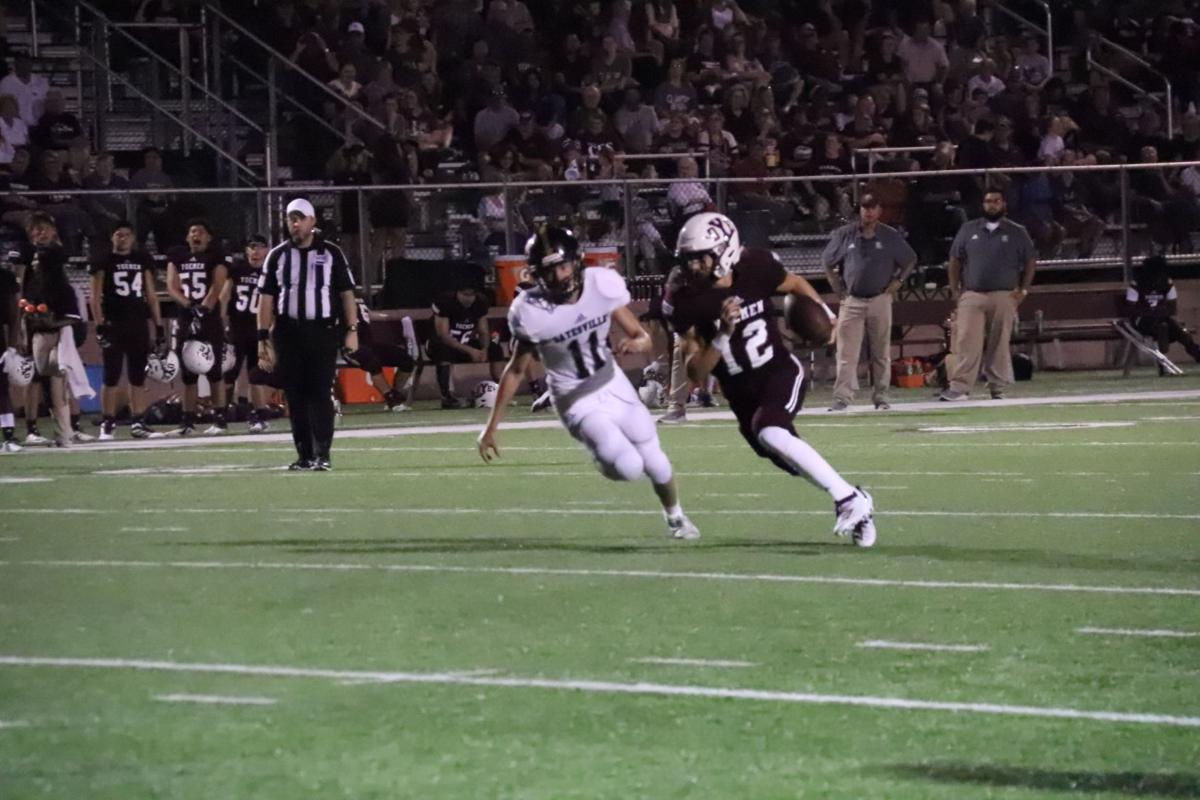 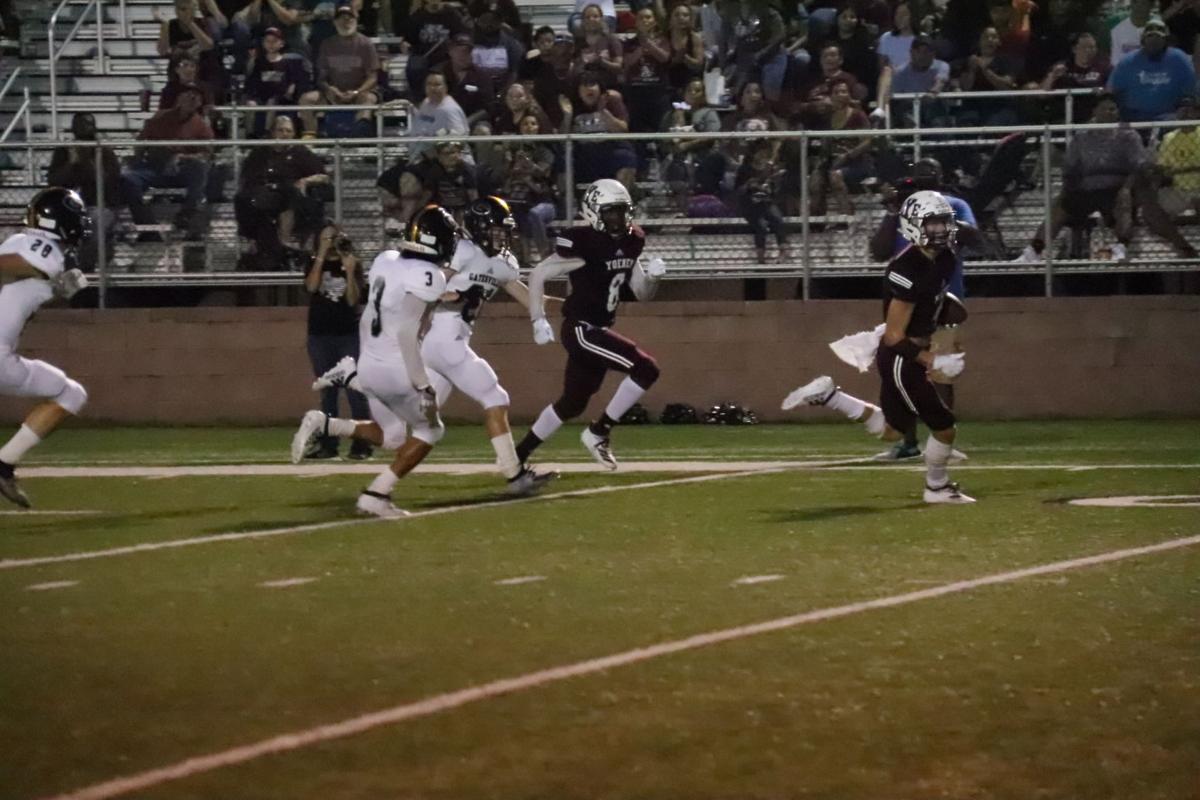 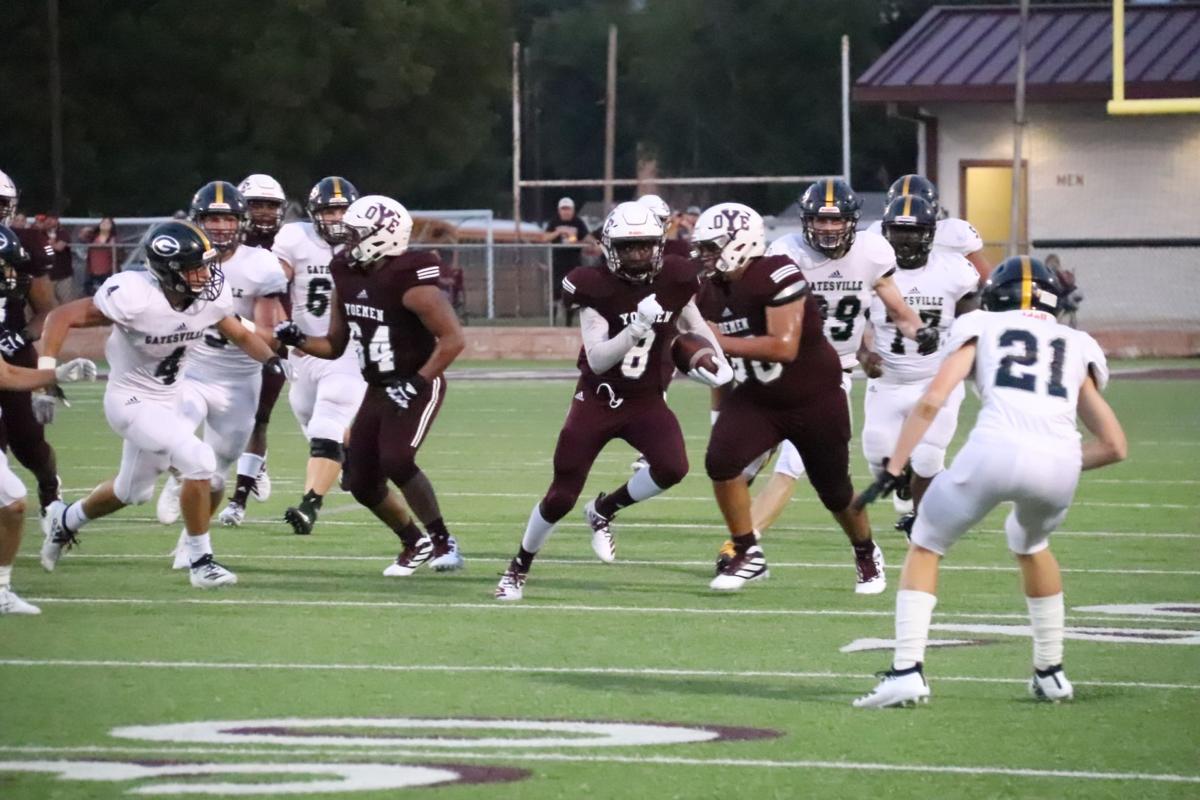 Cameron Yoe's Thomas Melton (8) tries to get past Gatesville's Parker Allman (21) on Friday in Cameron. 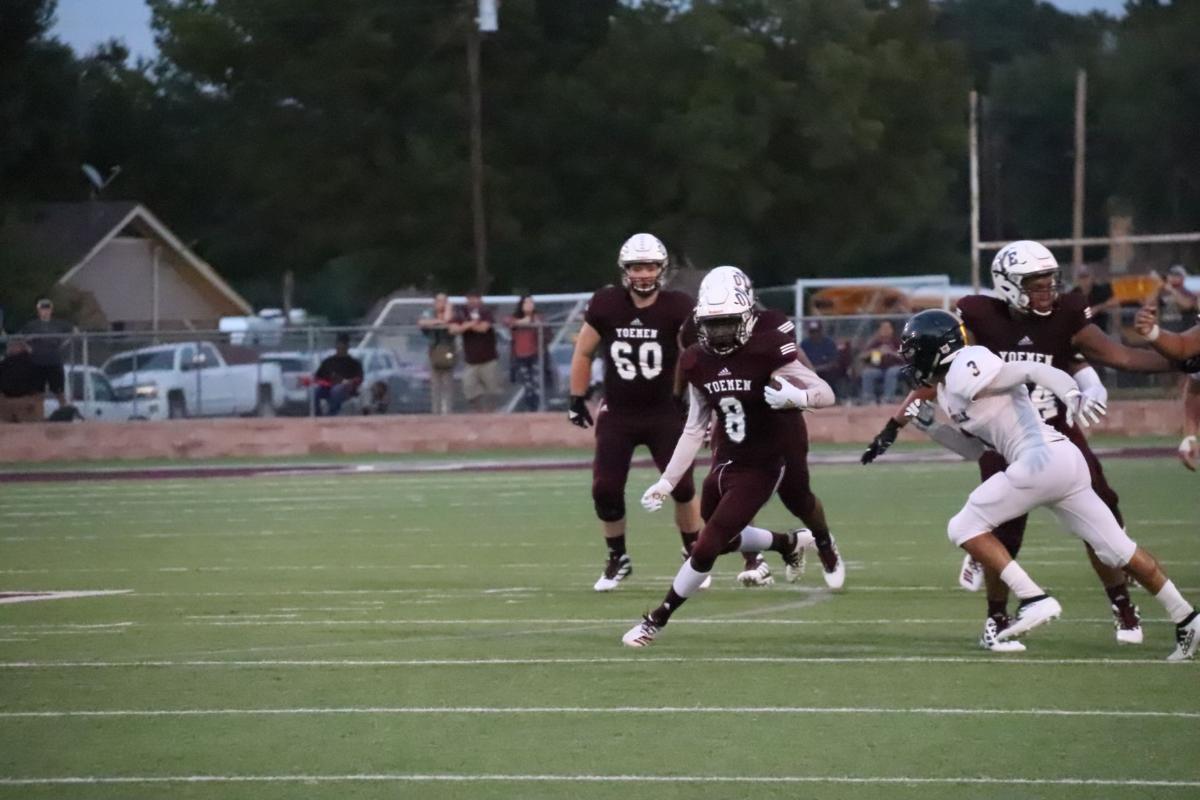 Cameron Yoe's Thomas Melton (8) tries to get past Gatesville's Isaiah Navejas (3) on Friday in Cameron.

Cameron Yoe's Kobe Young (4) is chased by Gatesville's Jeremiah Fails (9) and Taylor Lee on a punt return Friday at Cameron.

Cameron Yoe's Thomas Melton (8) tries to get past Gatesville's Parker Allman (21) on Friday in Cameron.

Cameron Yoe's Thomas Melton (8) tries to get past Gatesville's Isaiah Navejas (3) on Friday in Cameron.

CAMERON — If there were any questions in regards to how Cameron Yoe would start against Gatesville coming off a Week 2 bye, the Yoemen answered them — emphatically.

Cameron Yoe scored 33 first-quarter points and jumped ahead 54-13 at halftime en route to a 68-34 romp over the Hornets on Friday night at Yoe Field. Braden Brashear threw for 211 yards and five touchdowns, all in the first half, and Kobe Young hauled in six catches for 137 yards and three scores to lead the Yoemen.

“I thought we started off pretty well. Having that second-week bye, the thing I worry about the most is our guys not being in game shape,” Cameron Yoe head coach Tommy Brashear said. “That will come though as we go through our schedule. We still made too many mistakes, but I’m pleased overall.”

Yoe (2-0) scored on its first five drives of the game and scored 20 straight points before Gatesville (0-3) provided an answer. Brashear found Young with a 23-yard strike to start the onslaught and later connected with Jaidyn Sanchez for a 33-yard score to lead 13-0. Thomas Melton got in on the action, catching a 25-yard pass from Brashear to make it 20-0 with 6 minutes left in the opening frame.

“It’s obviously tough when you get down to a great team on the road,” Gatesville head coach Luke Howard said. “We had some opportunities there and got some momentum at times, but we had a lot of self-inflected mistakes. We shot ourselves in the foot at times and that just hurt us.”

The Hornets cut into the deficit with a 52-yard pass from Wesley Brown to Carson Brizendine before the Yoemen reeled off another 20 straight points. Brashear connected with Young on touchdown throws of 58 and 1 yards and Billy Collier recorded Yoe’s first of two interception returns for scores, his coming from 42 yards out for a 40-7 tally.

Gatesville found paydirt for the second time of the first half with a 1-yard run by Hayden Mooney with 7:47 to go in the second quarter. Cameron Yoe’s Calvin Stewart pushed the Yoemen’s lead back to 34 with a 75-yard kickoff return. Zan Zeinert — who took over for Braden Brashear at quarterback in the second half — intercepted the Hornets and returned the ball 36 yards with under a minute left in the first half.

“I thought we were aggressive on defense and played well overall,” Tommy Brashear said. “When we stay focused and we do what we need to do, then we’re pretty good. We have weapons on both sides of the ball and seniors who have been playing for a long time.”

Gatesville found success offensively in the second half, but primarily against the Yoemen’s backups. The Hornets outscored Yoe 21-14 after the break. Yoe got a 79-yard TD run from James DuBose (105 yards rushing) on its first drive of the second half and later scored on Zakorien Spikes 11-yard reception from Zeinert.

Jason Delong scored on a 1-yard run with less than a minute left in the third quarter. Chris Nashif also cashed in from a yard out with 8:24 to go in the game and Parker Allman hauled in Brown’s second TD pass of the game with a 30-yard score.

Despite challenging schedule, young Hornets expect to get better

Gatesville has plenty of excuses.