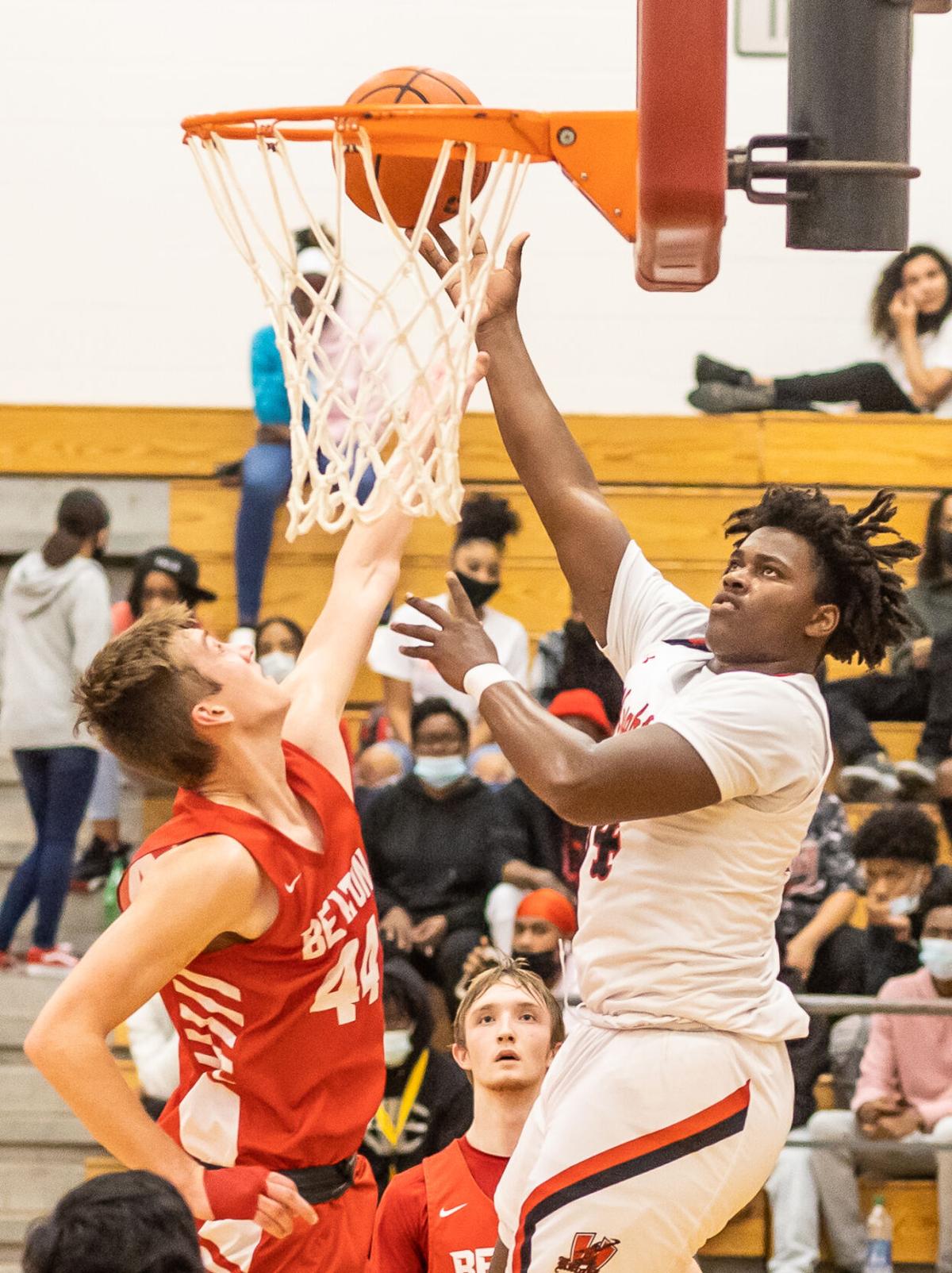 Harker Heights’ Terrance Carter, right, shoots against Belton’s TJ Johnson (44) on Tuesday at Harker Heights. The Knights returned to the rankings at No. 21 this week and beat Belton 69-53. 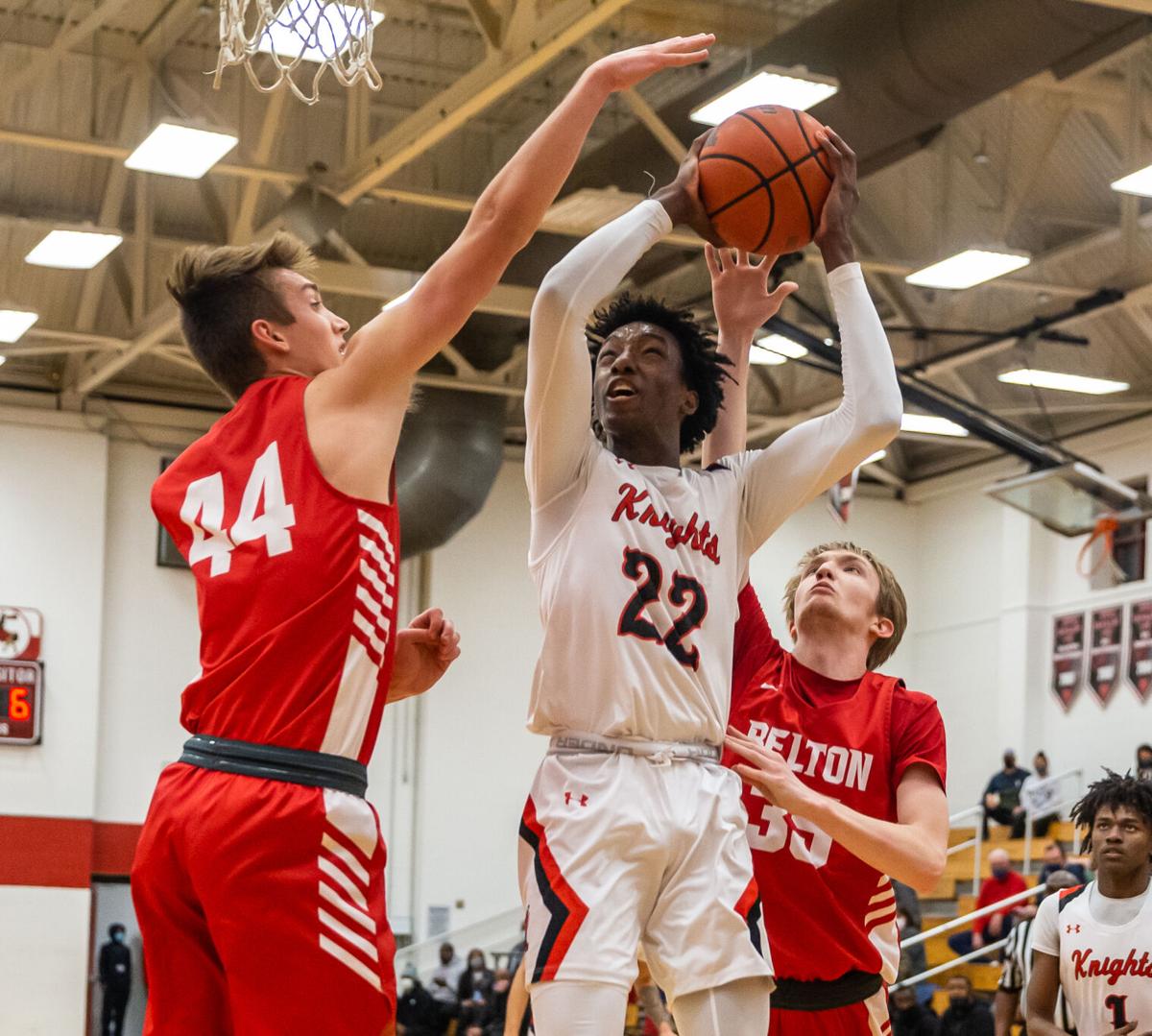 Harker Heights' Antwan Taylor (22) shoots from the side of the basket as Belton's TJ Johnson (44) and Kayden Downs (35) defend on Tuesday in Harker Heights. 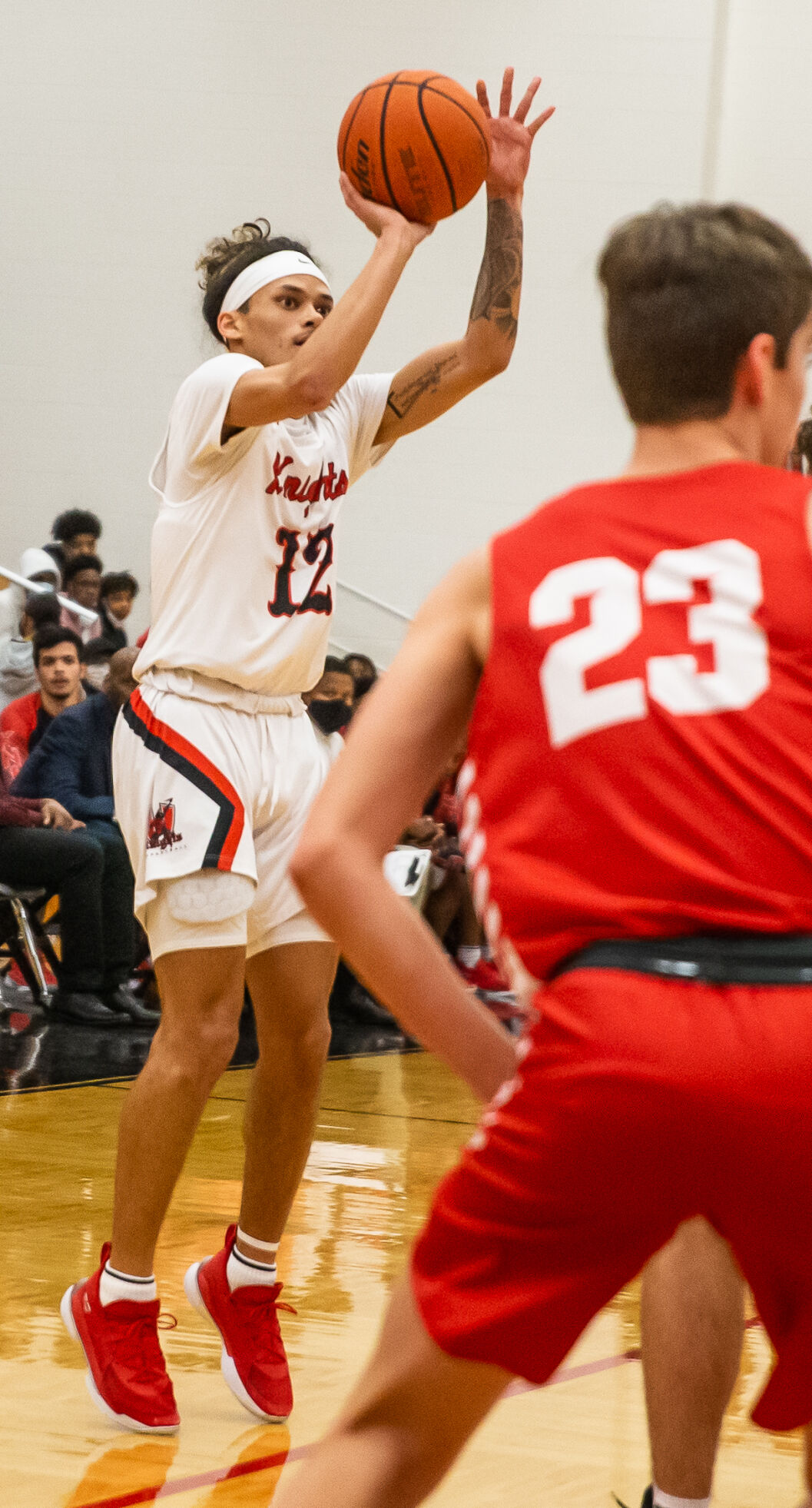 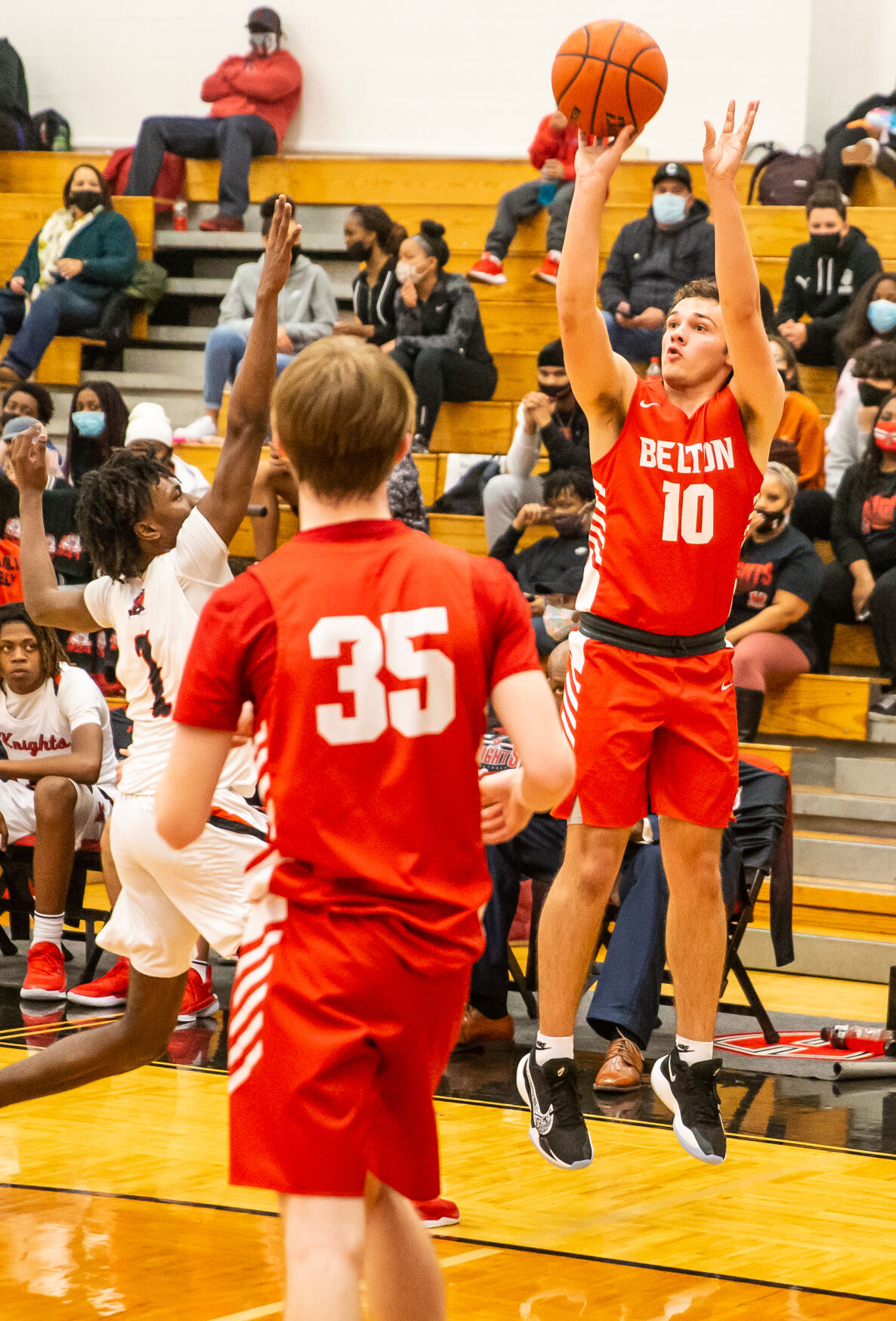 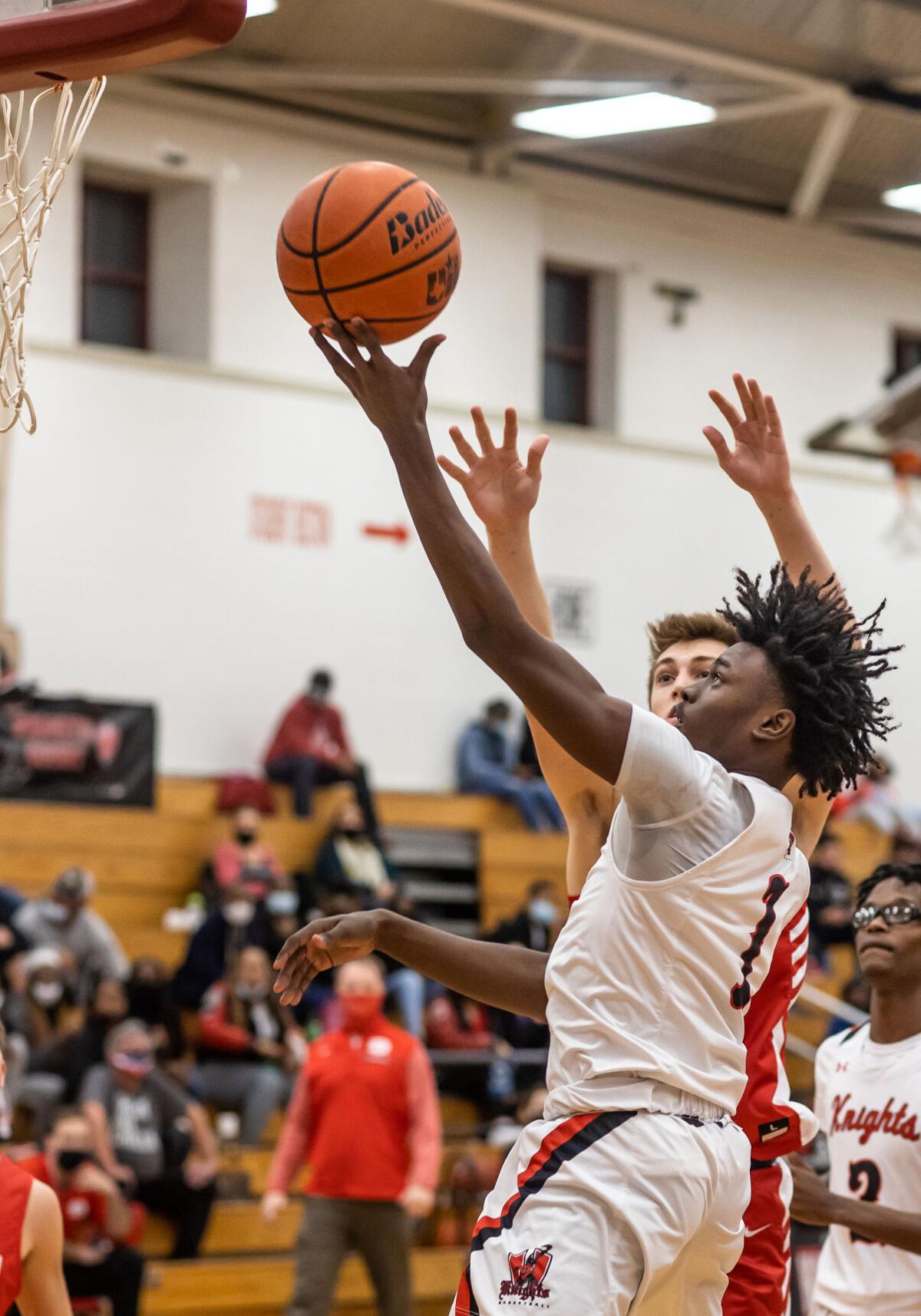 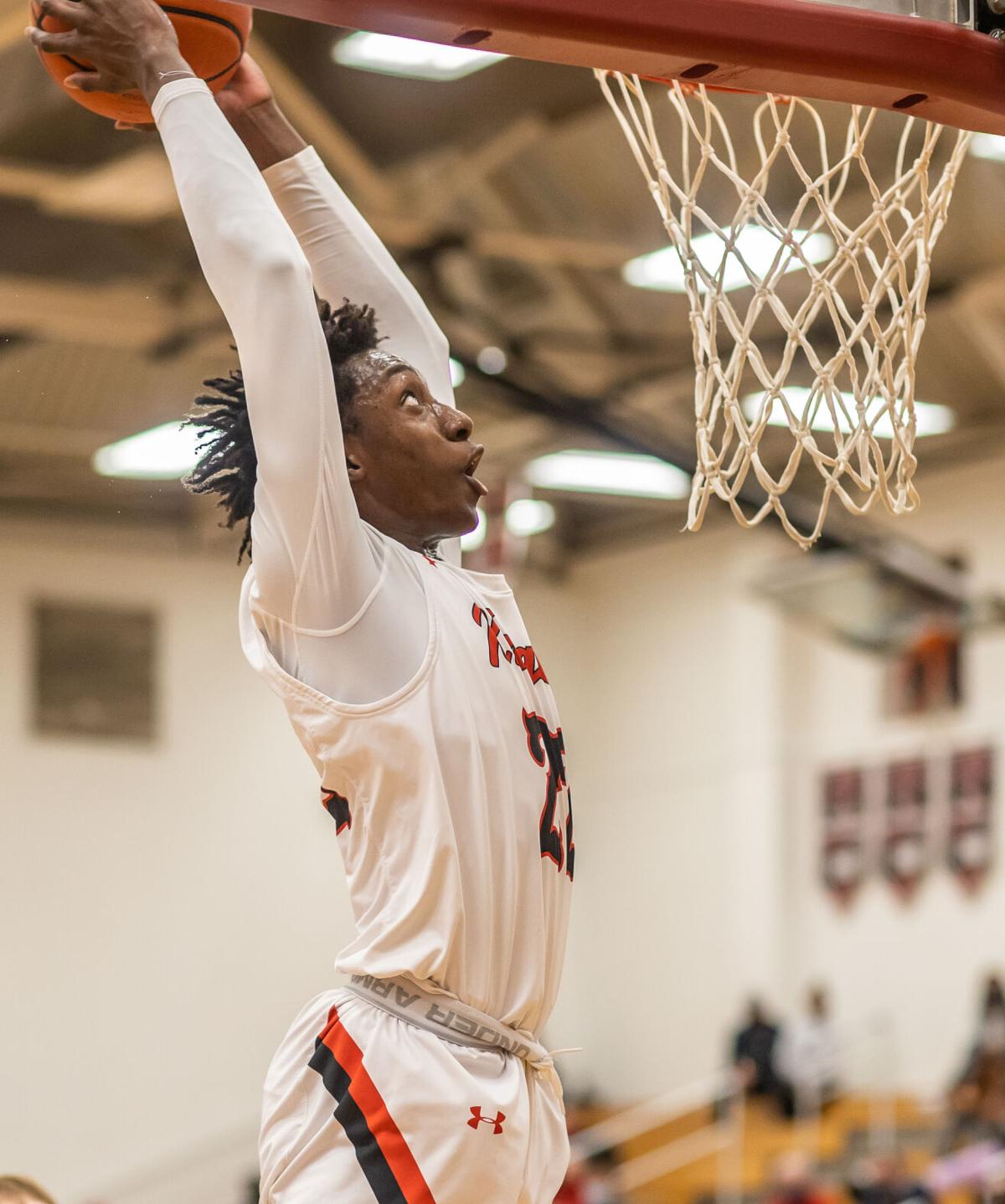 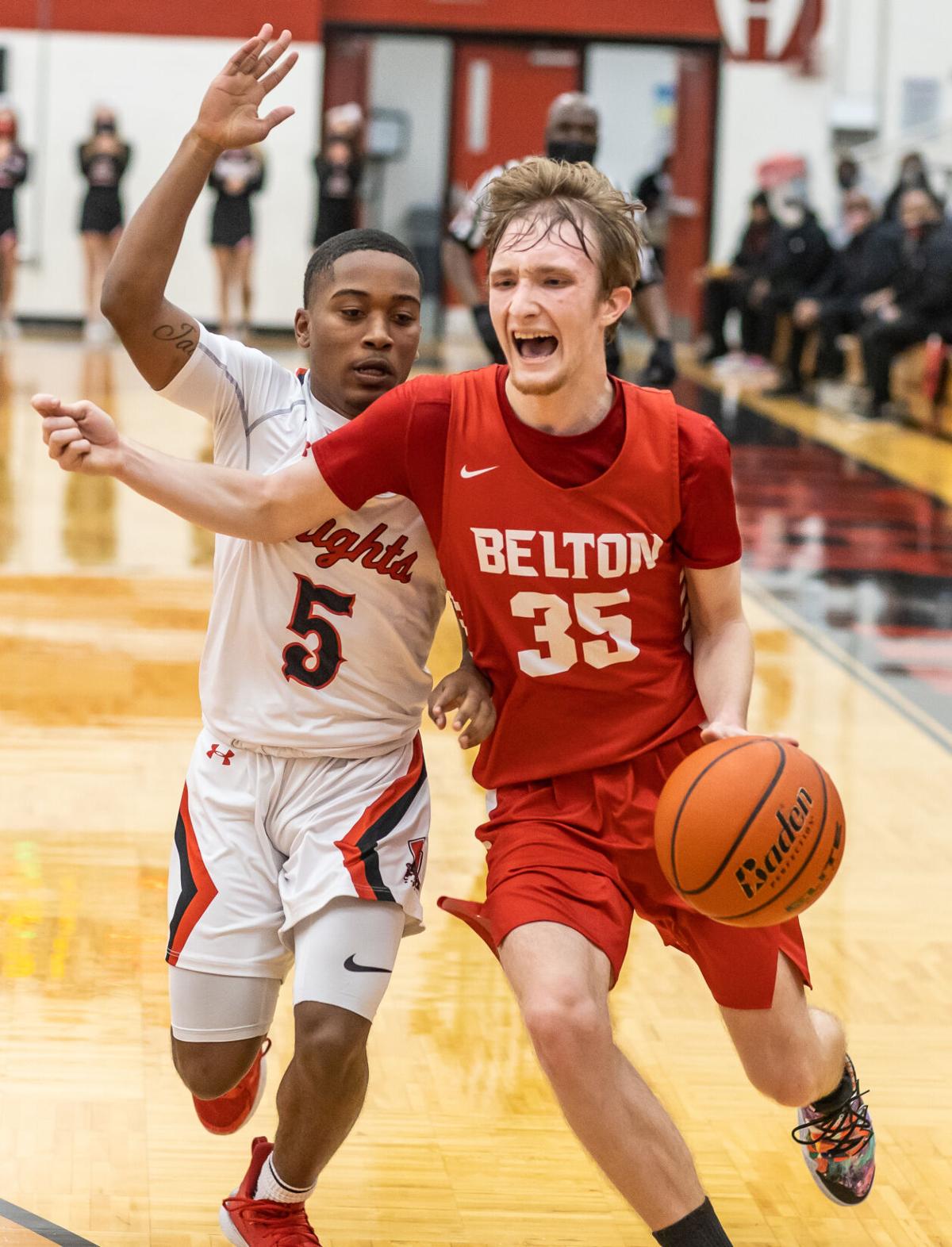 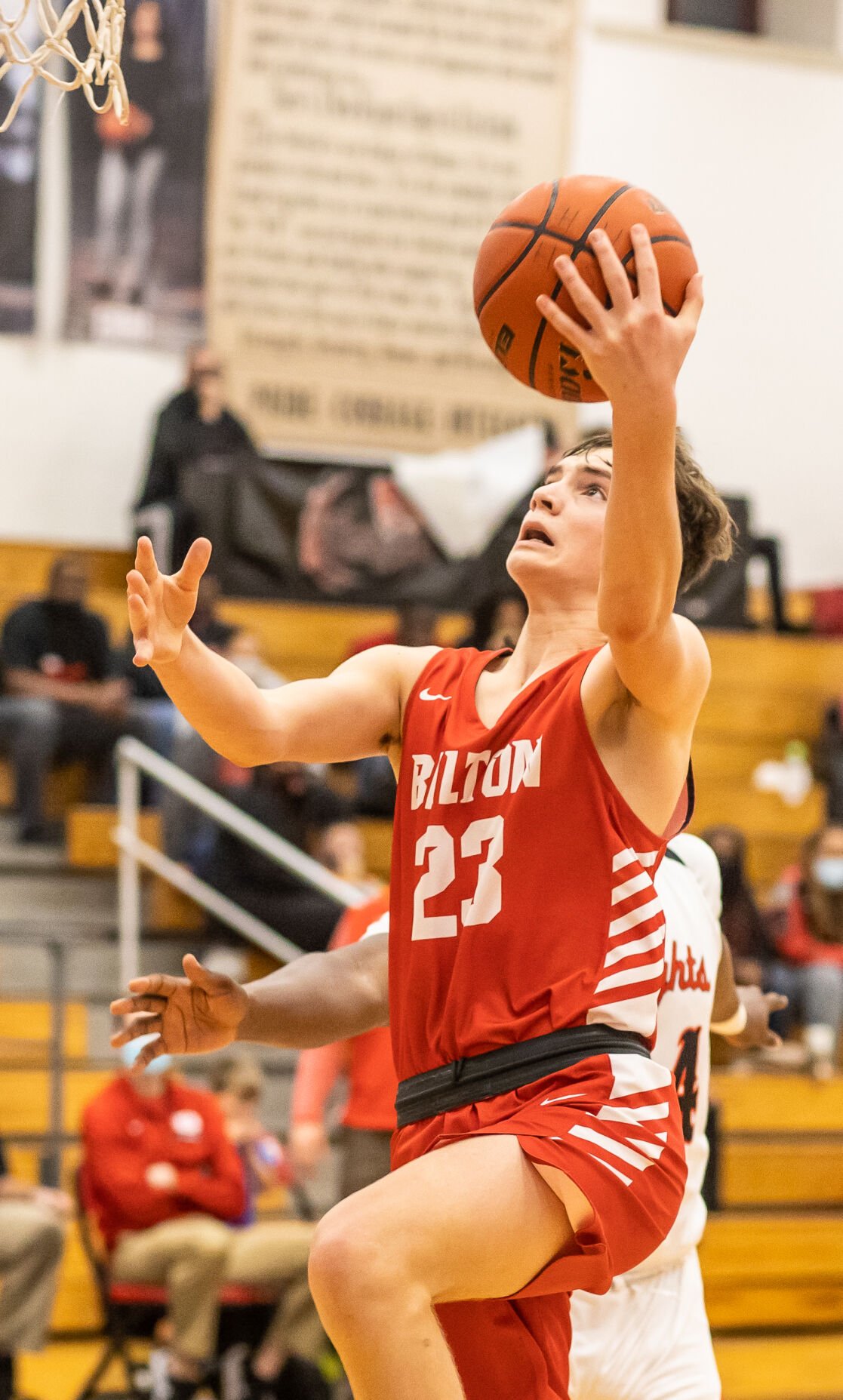 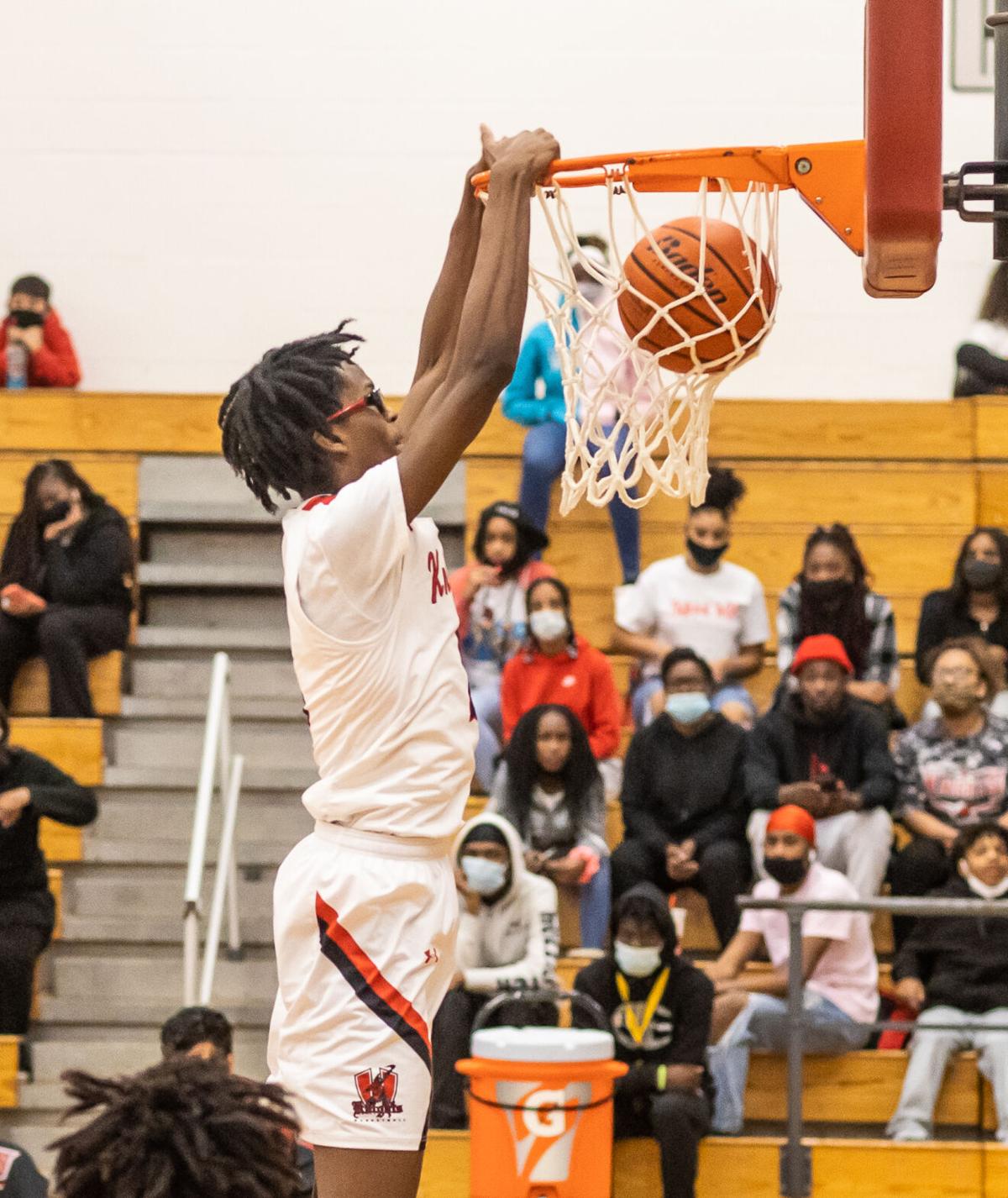 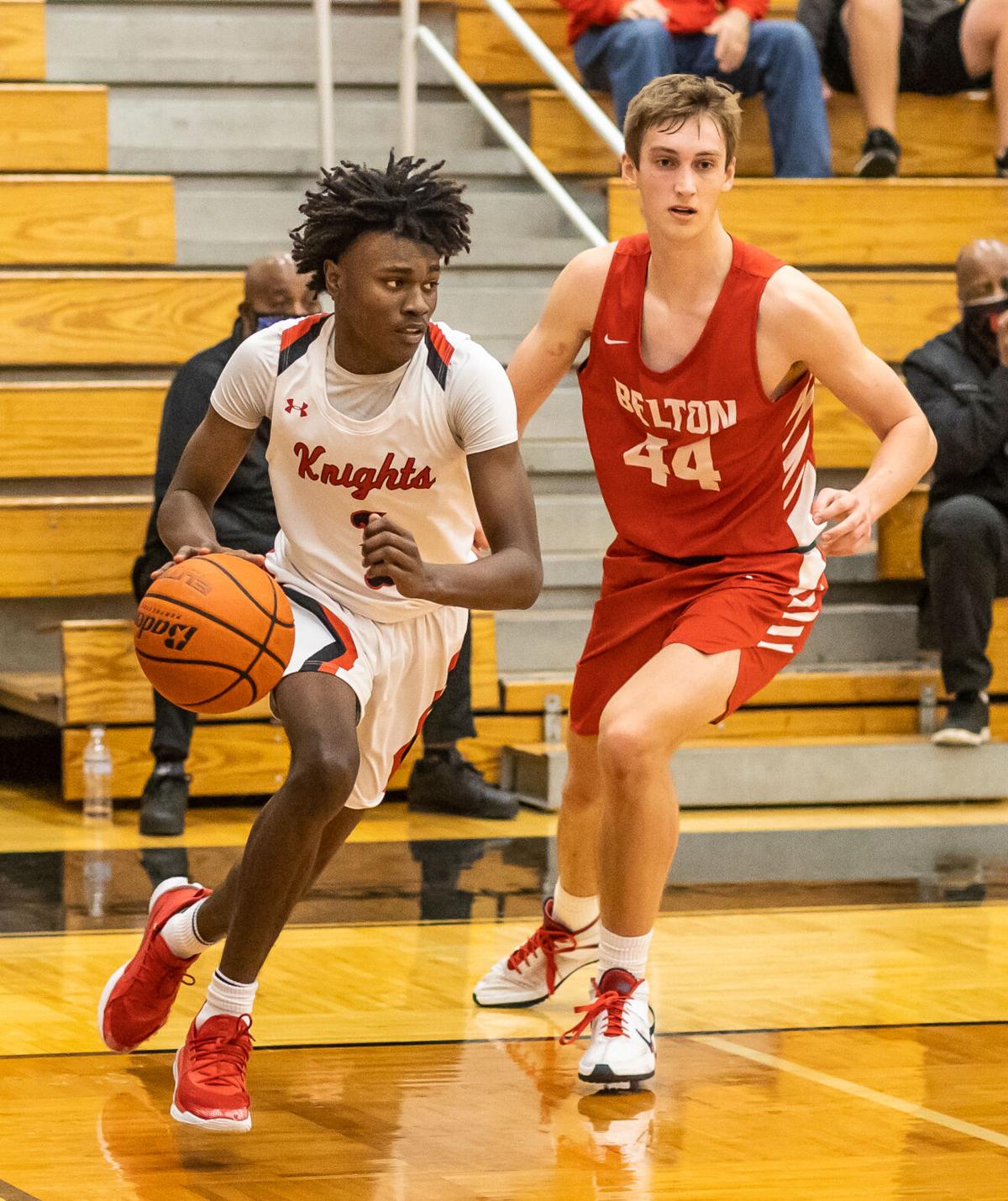 Harker Heights’ Terrance Carter, right, shoots against Belton’s TJ Johnson (44) on Tuesday at Harker Heights. The Knights returned to the rankings at No. 21 this week and beat Belton 69-53.

Harker Heights' Antwan Taylor (22) shoots from the side of the basket as Belton's TJ Johnson (44) and Kayden Downs (35) defend on Tuesday in Harker Heights.

HARKER HEIGHTS — It is the ideal scenario, but Celneque Bobbitt was forced to wait for it.

Over the past few years, Harker Heights has not delivered to the extent anticipated. Following the 2015-16 season, the Knights missed the playoffs three consecutive times before returning a year ago.

Now, however, No. 21 Harker Heights appears destined to create a postseason streak, and the reason why was apparent Tuesday.

The Knights surged past Belton thanks to a 28-11 outburst to close the game, ensuring a 69-53 victory as four Harker Heights players produced double-digit scoring performances.

Following the win, the Knights’ head coach admitted the offense was not as balanced in recent years.

“Having multiple scoring options is the best thing we can do,” Bobbitt said. “I learned a long time ago that if you can get six to

eight points from six to eight players, it is real hard to cover.

“Everyone comes in thinking they have to stop a certain player, but then we have other guys step up and make shots. But it is just experience and maturation, because these are the same guys that lost games in the past.”

Against the Tigers, the Knights took turns handling the scoring load.

Junior forward C.J. Evans scored 16 of his game-high 17 points in the first half, teammate Terrance Carter posted eight of his 14 points in the fourth quarter and several others had their opportunities in between as five players tallied at least eight points.

“It feels really good,” Evans said, “because on any given night, any of us can score the ball. As long as we work together to create opportunities, we will be hard to beat.

“We just have to keep sharing the ball.”

Along with Evans, guard Jalen Brown-Kaderka, who produced eight of his 11 points in the first quarter, including a pair of 3-pointers, helped propel the Knights to 23-16 advantage by the conclusion of the period.

But it would not last.

“Closing the third quarter with a run was huge,” said Evans, who also contributed seven assists, two rebounds, two steals and two blocks. “We just had to stay with the game plan, listen to Coach and continue to do what he told us to do.

“That allowed us to stay in the game.”

Belton, which will try to bounce back Friday at Killeen, was led by Ben Jones, who scored 12 points in the loss, while teammate T.J. Johnson delivered an 11-point, 16-rebound double-double. Additionally, freshman Trap Johnson and Kayden Downs had 11 and 10 points, respectively, in the loss.

The outcome drops the Tigers out of a three-way tie atop the district standings, leaving Harker Heights and No. 14 Ellison deadlocked.

With the second half of the district schedule remaining, beginning Friday with a trip to Bryan, Bobbitt knows a lot can change, but he also knows a lot already has.

“The basketball gods have blessed me,” he said, “because they were really mad at me for a couple years.

“Most of these guys have not been successful like this before, but one year of experience makes a whole world of difference.”

TEMPLE — Aaliyah Thomas generally doesn’t show a lot of emotion on the court. So, it wasn’t necessarily a surprise that Temple’s guard shook o…