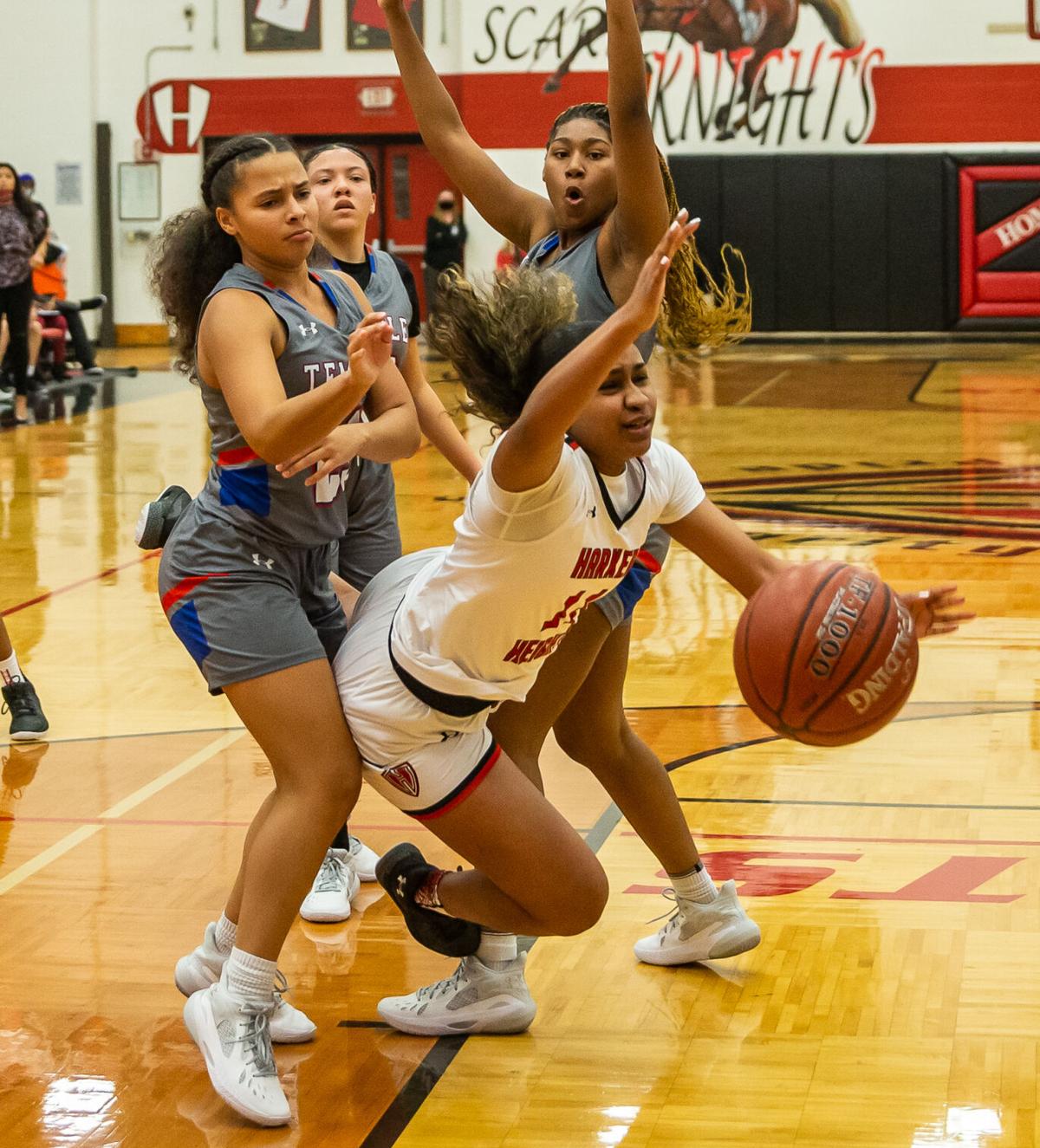 Harker Heights’ Sierra Brooks (11) falls after being fouled by Temple on Tuesday at Harker Heights. The Lady Knights rallied to beat Temple 48-46. 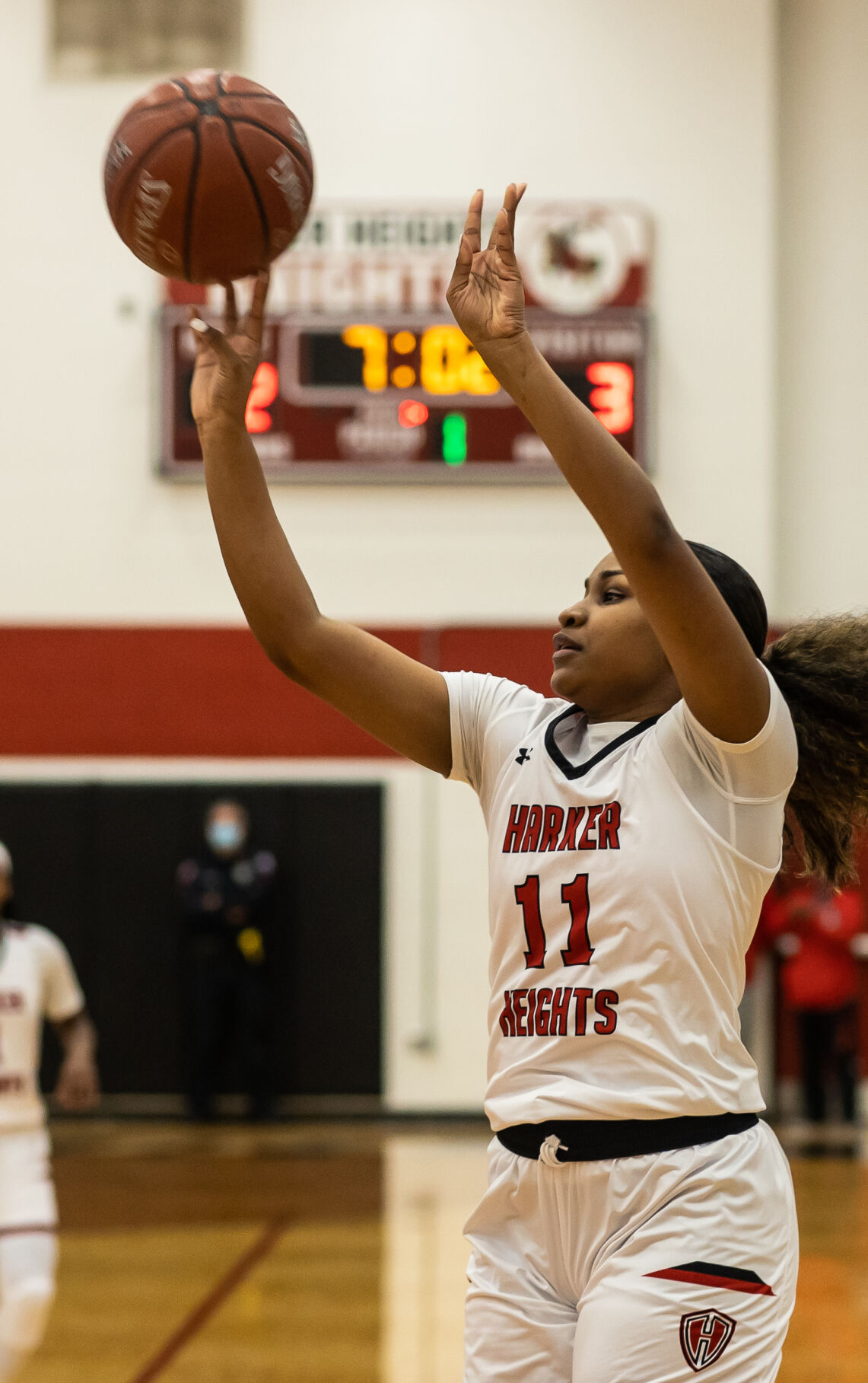 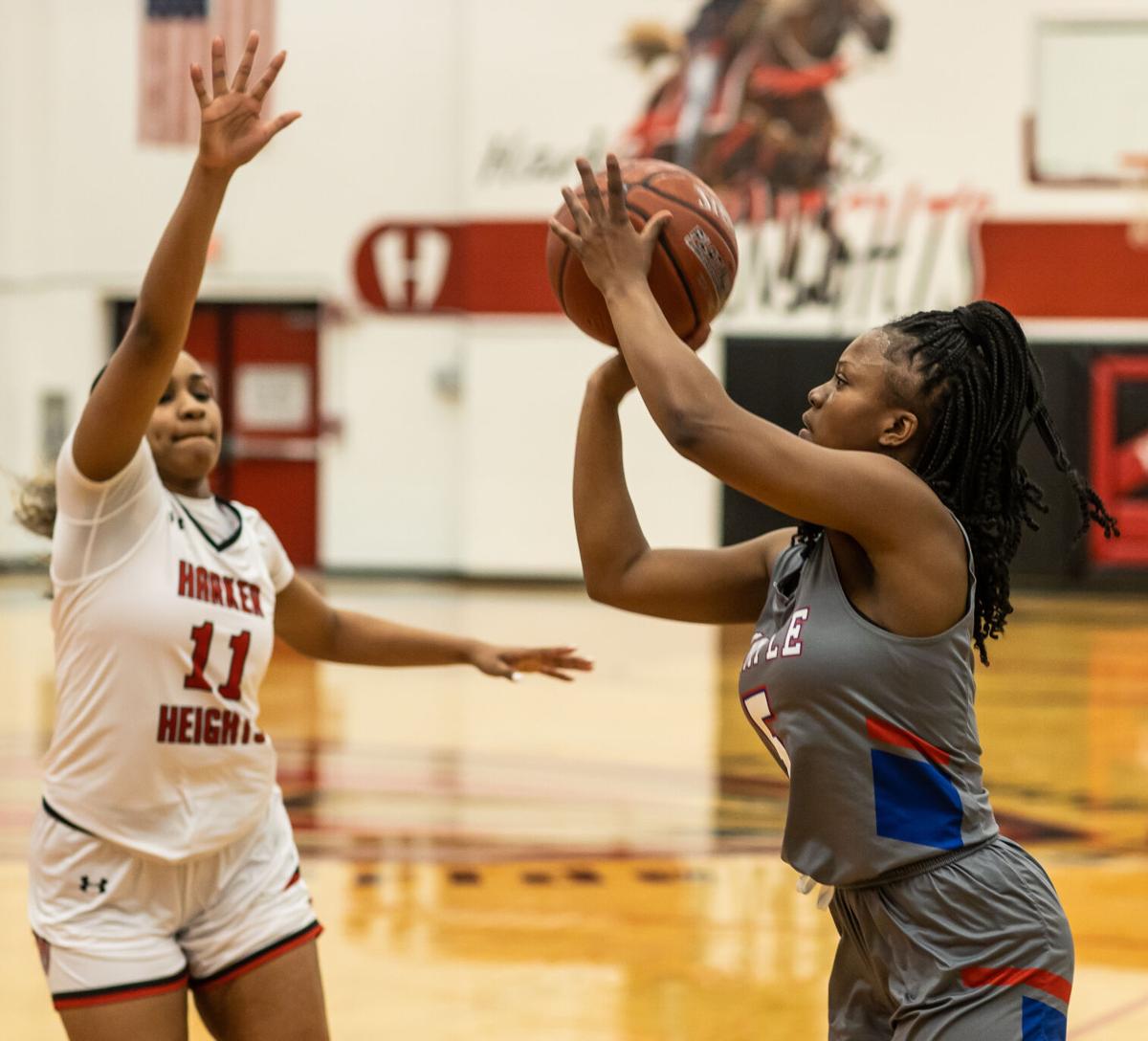 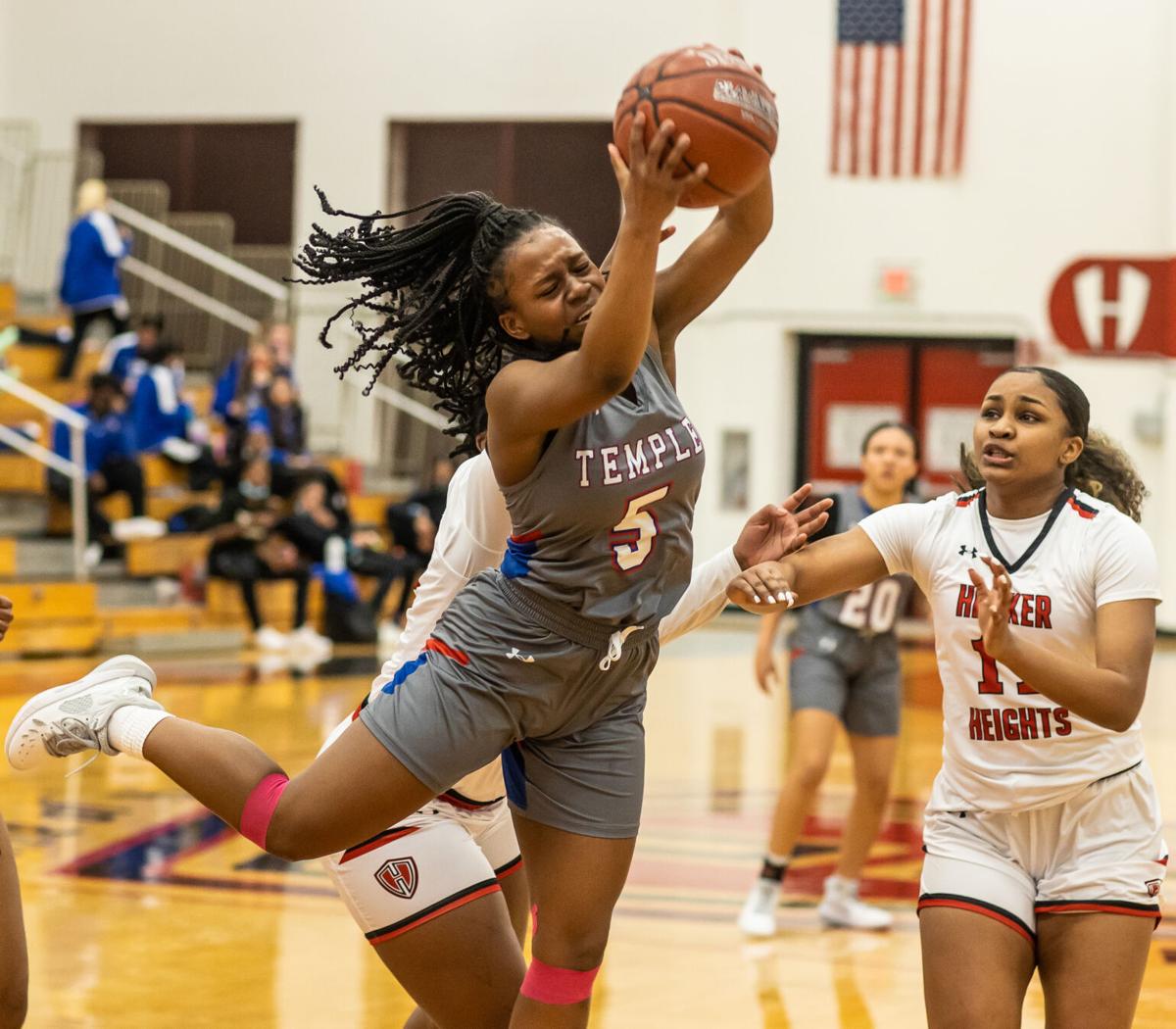 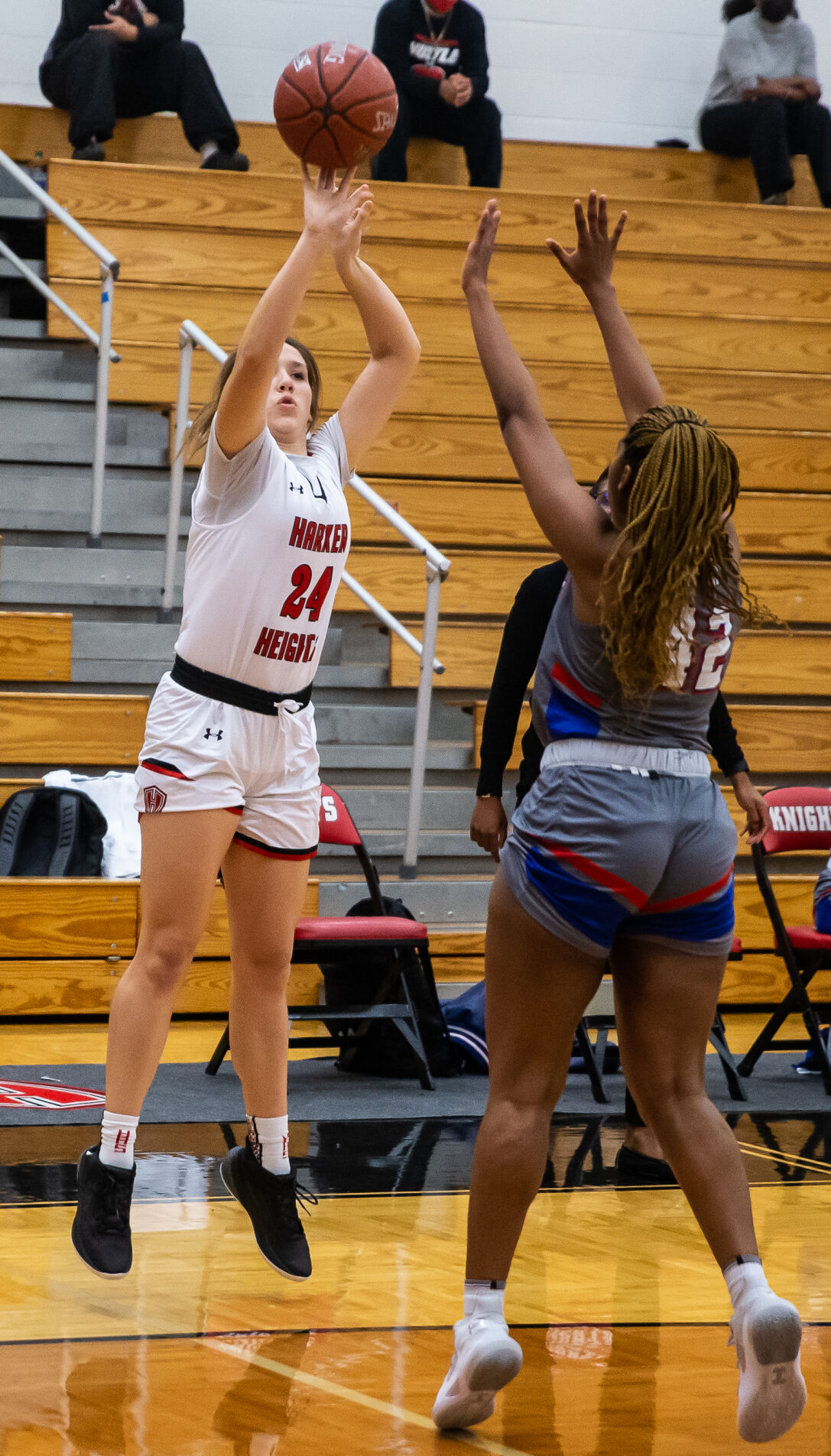 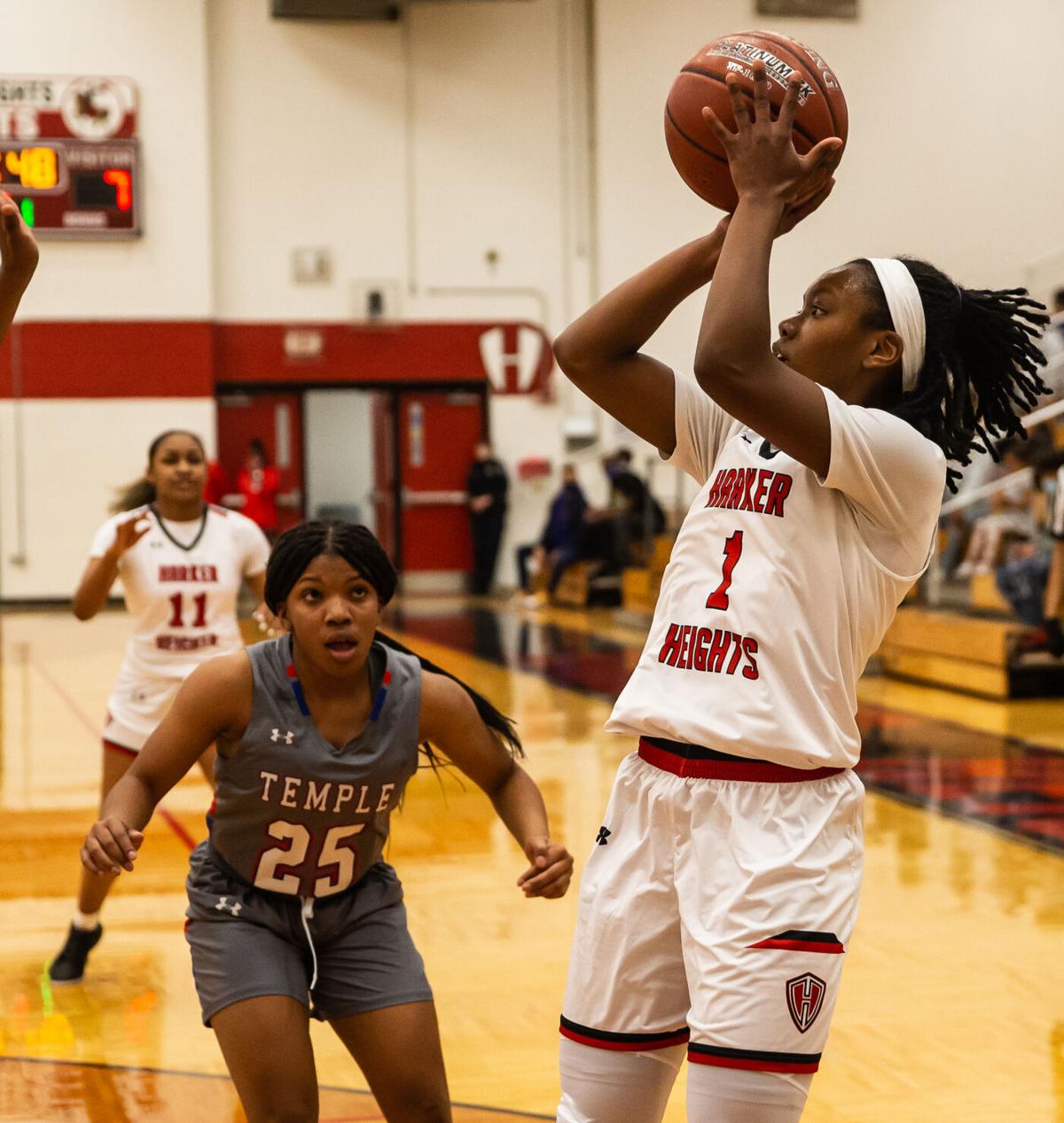 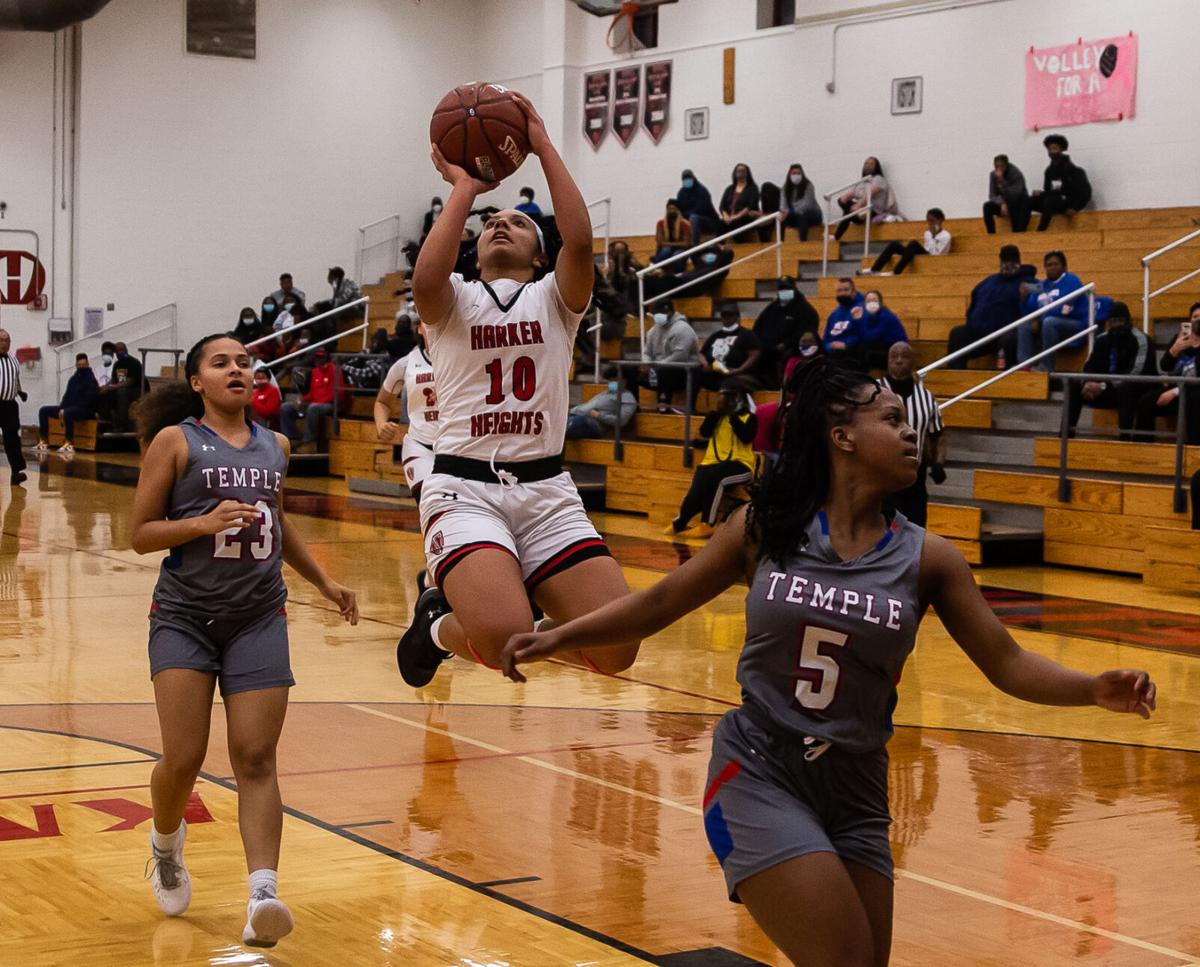 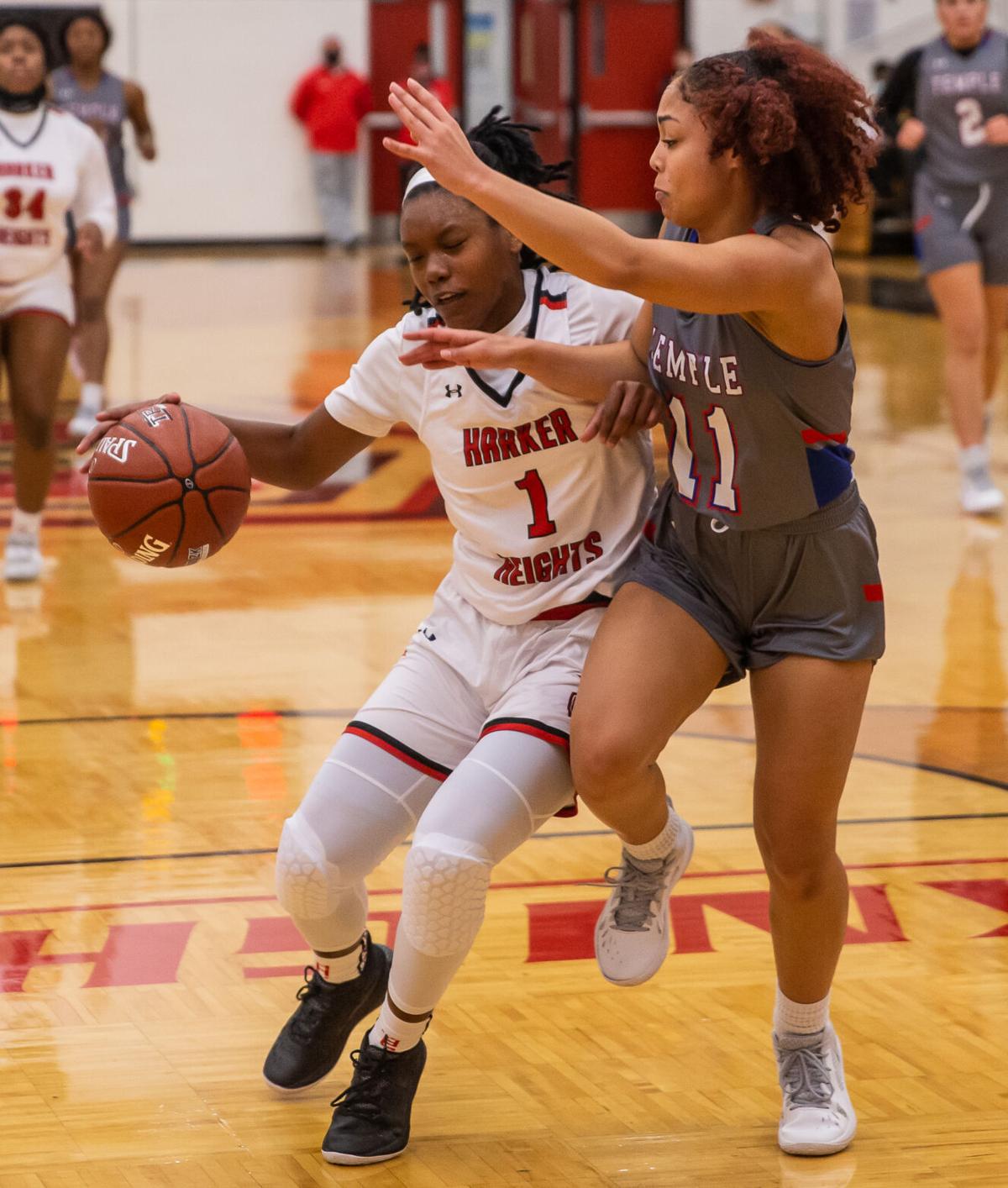 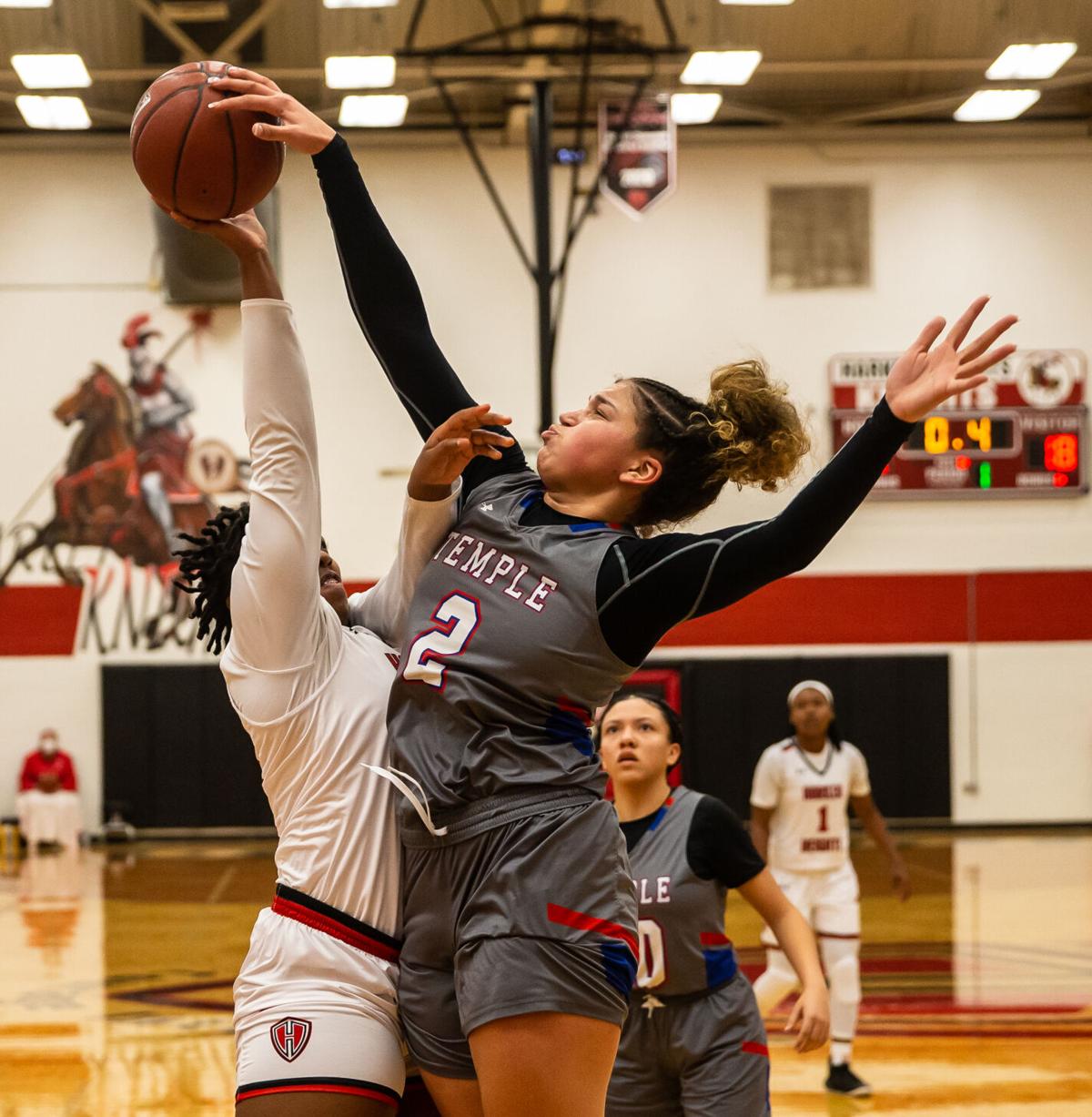 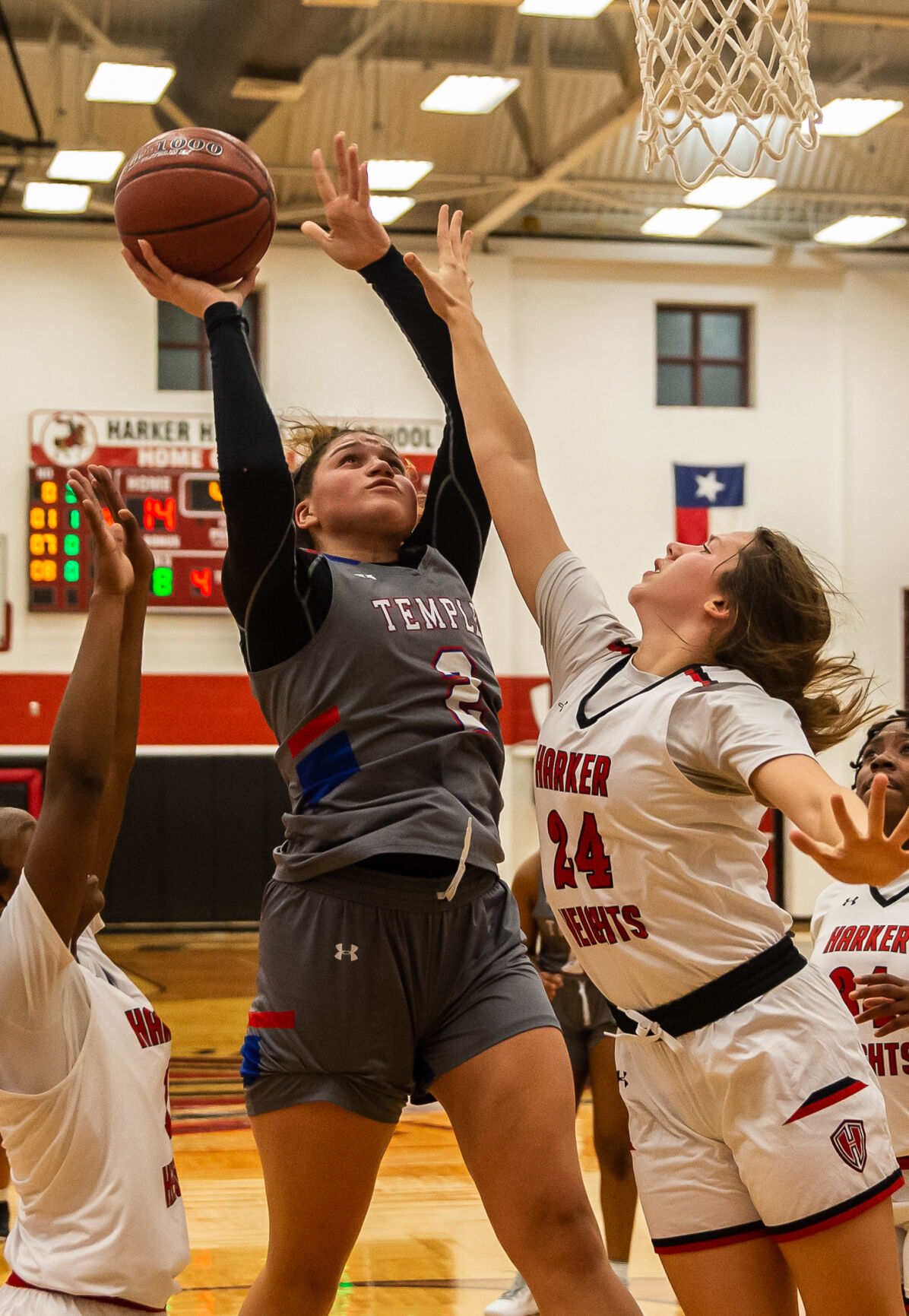 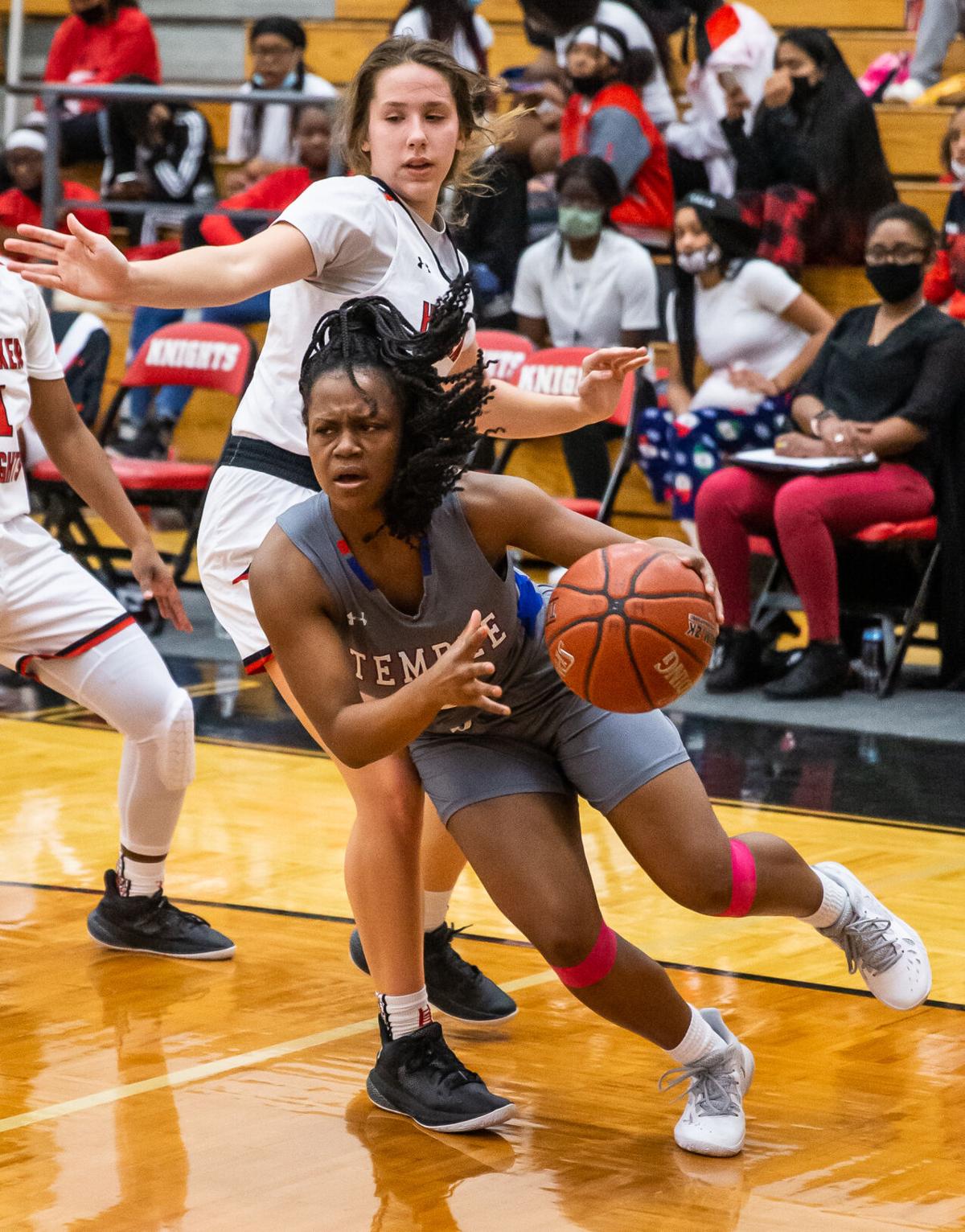 Harker Heights’ Sierra Brooks (11) falls after being fouled by Temple on Tuesday at Harker Heights. The Lady Knights rallied to beat Temple 48-46.

HARKER HEIGHTS — Sierra Brooks did not make her first field goal until 5 minutes remained in the third quarter, and it would not be her last.

Harker Heights’ standout guard and the defending District 12-6A Most Valuable Player could not connect early on against visiting Temple, and the lack of production was costly.

The Tem-Cats claimed a lead in the first quarter and held it for a majority of the game, seeing the advantage swell to 43-41 with 4:59 left in regulation.

Then, Brooks, who missed all eight of her first-half field goals, discovered her rhythm.

The senior scored 11 of her 16 points in the fourth quarter, including a pair of free throws with 0.5 seconds to go, guiding the Lady Knights to a 48-46 victory.

Following the game, Brooks admitted her output late was a result of finding her focus, especially at the foul line.

“I just had to stay calm and shoot my free throws like I did in practice,” she said. “I just needed to have the mentality that I had to make it.

“I just had to keep taking shots even though I wasn’t making them. Anything can change.”

Harker Heights (12-3, 7-0) earned a slim 8-7 lead on guard Emri Lovell’s free throw with 3:38 remaining in the first quarter, but Temple immediately took control of the contest with nine unanswered points. The cushion inflated to 25-14 before the Lady Knights pulled within six points, 29-23, at halftime.

Paced by junior center Aniah Hall’s eight-point third quarter, when she posted all but two of her team’s points, the Tem-Cats’ increased their lead to 39-29 entering the fourth period. Then, Hall’s free throws widened the gap to 43-31.

The advantage would only shrink, though.

Lovell’s floater in the lane capped off a 12-0 outburst, tying the game 43-43, and Brooks’ steal and fastbreak layup moments later gave Harker Heights the lead.

But with 19.1 seconds left, Temple (10-6, 5-2) tied the score 46-46 on Nyteria Colbert’s pair of free throws, setting the stage for Brooks to be fouled just before the final buzzer sounded.

“Our mentality had to change,” Brooks said.

“We’ve been winning, so we couldn’t just let this game slip away.

“We finally started working together, because we were very selfish in the first half.”

Along with Brooks’ heroics, Lovell finished with 18 points and four steals, while Angelique Morgan added 10 points to help spoil Hall’s 21-point, 13-rebound, four-block performance and keep the Lady Knights’ in sole possession of first place in the district standings.

Harker Heights returns to the court Friday, opening the second round of district play at Copperas Cove, and Brooks believes the comeback against Temple will propel the Lady Knights forward.

“This definitely gives us some more momentum,” she said. “Just knowing that we have the capability to beat everyone in the district is a good thing.”