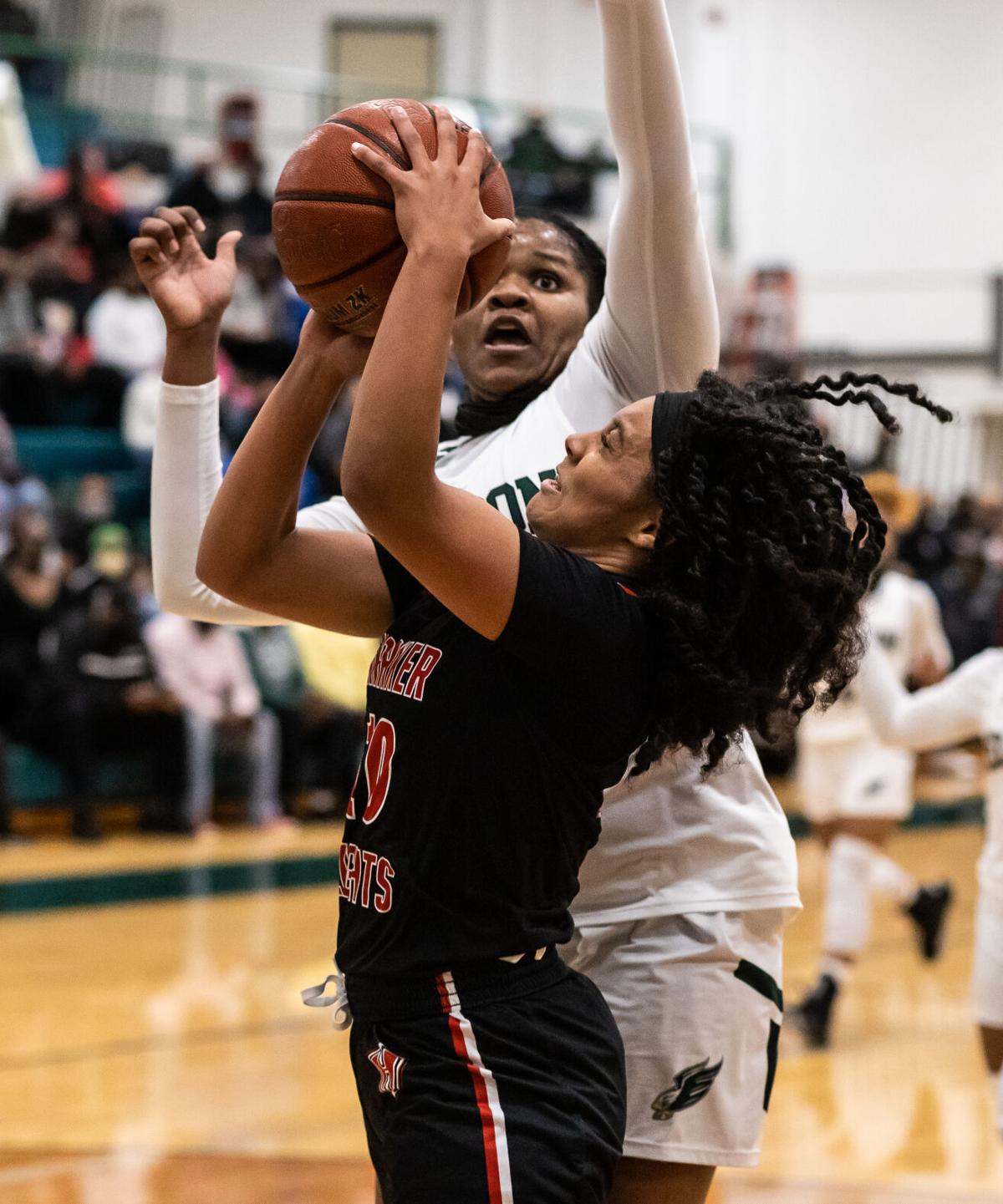 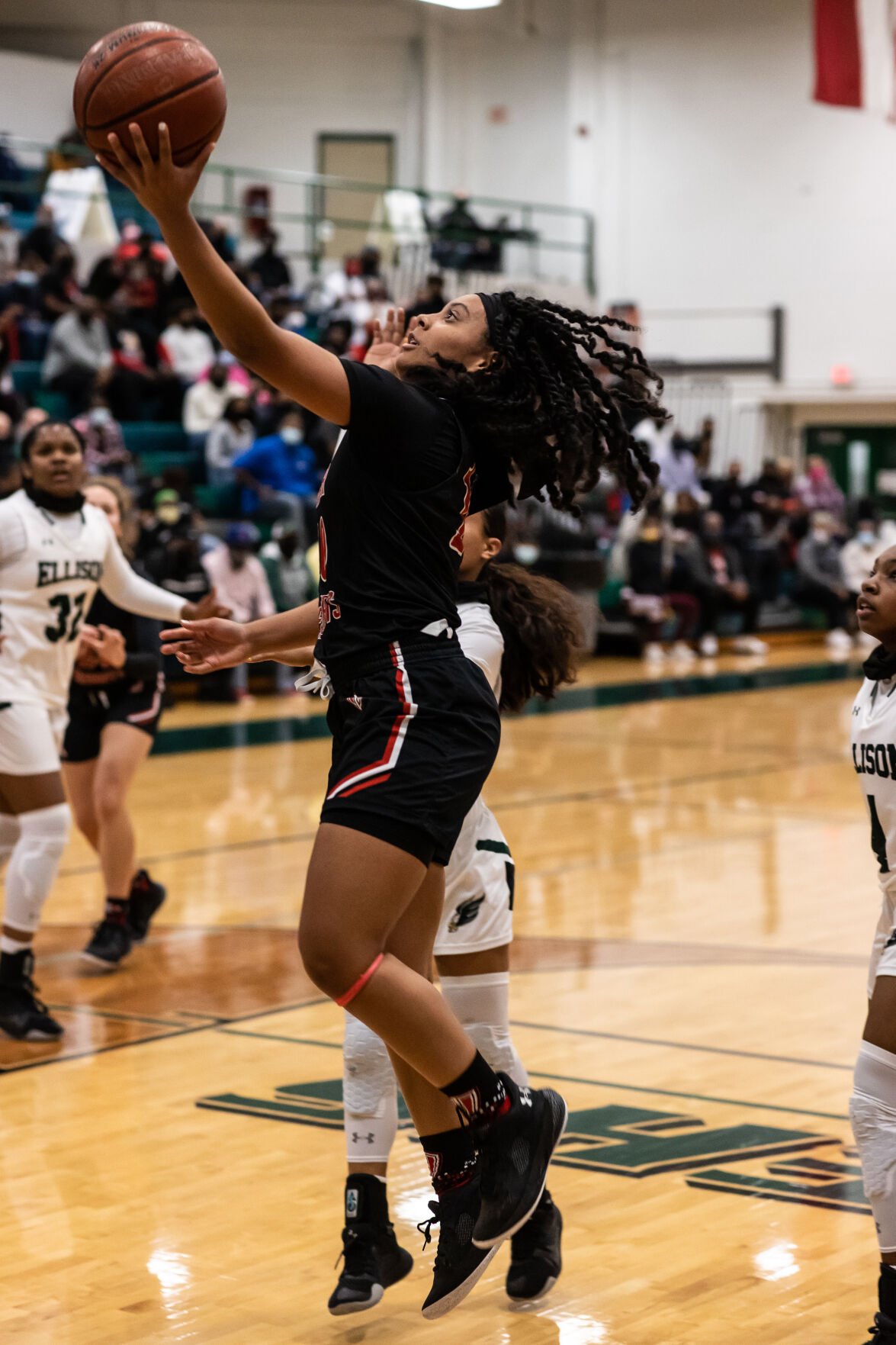 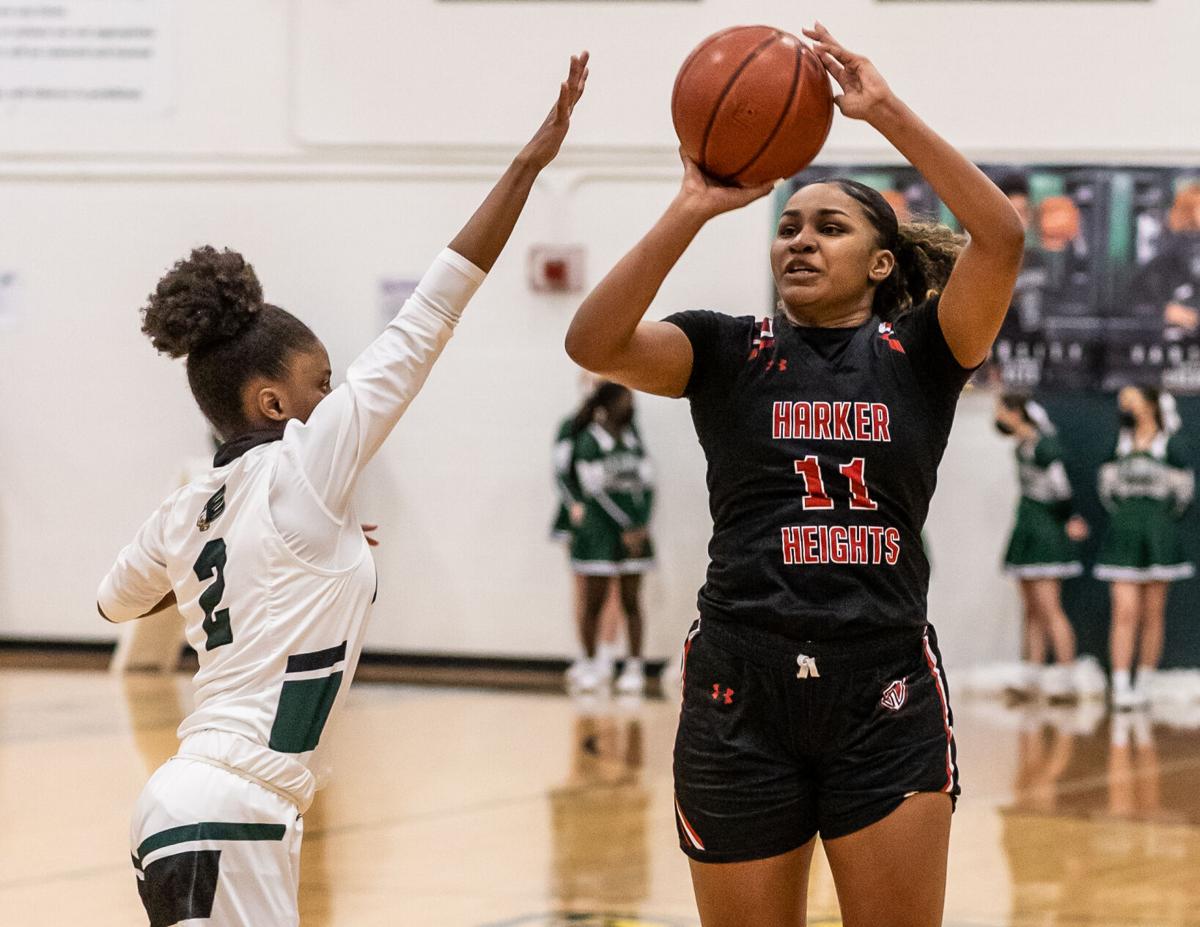 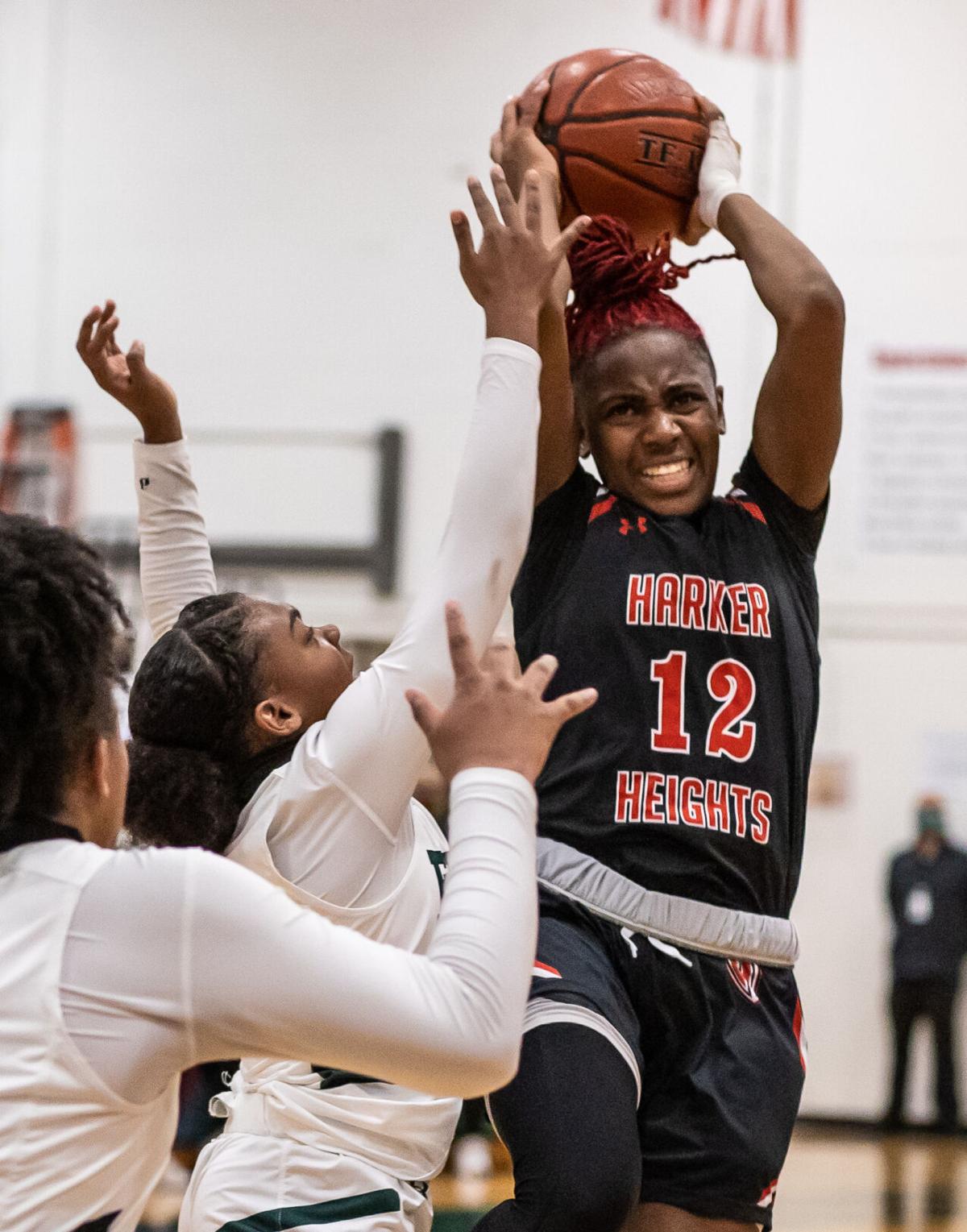 Harker Height’s Empress Roberts (12)  draws a foul on an Ellison defender Tuesday at Ellison. Harker Heights won 60-47 in a battle for sole possession of first place in District 12-6A. 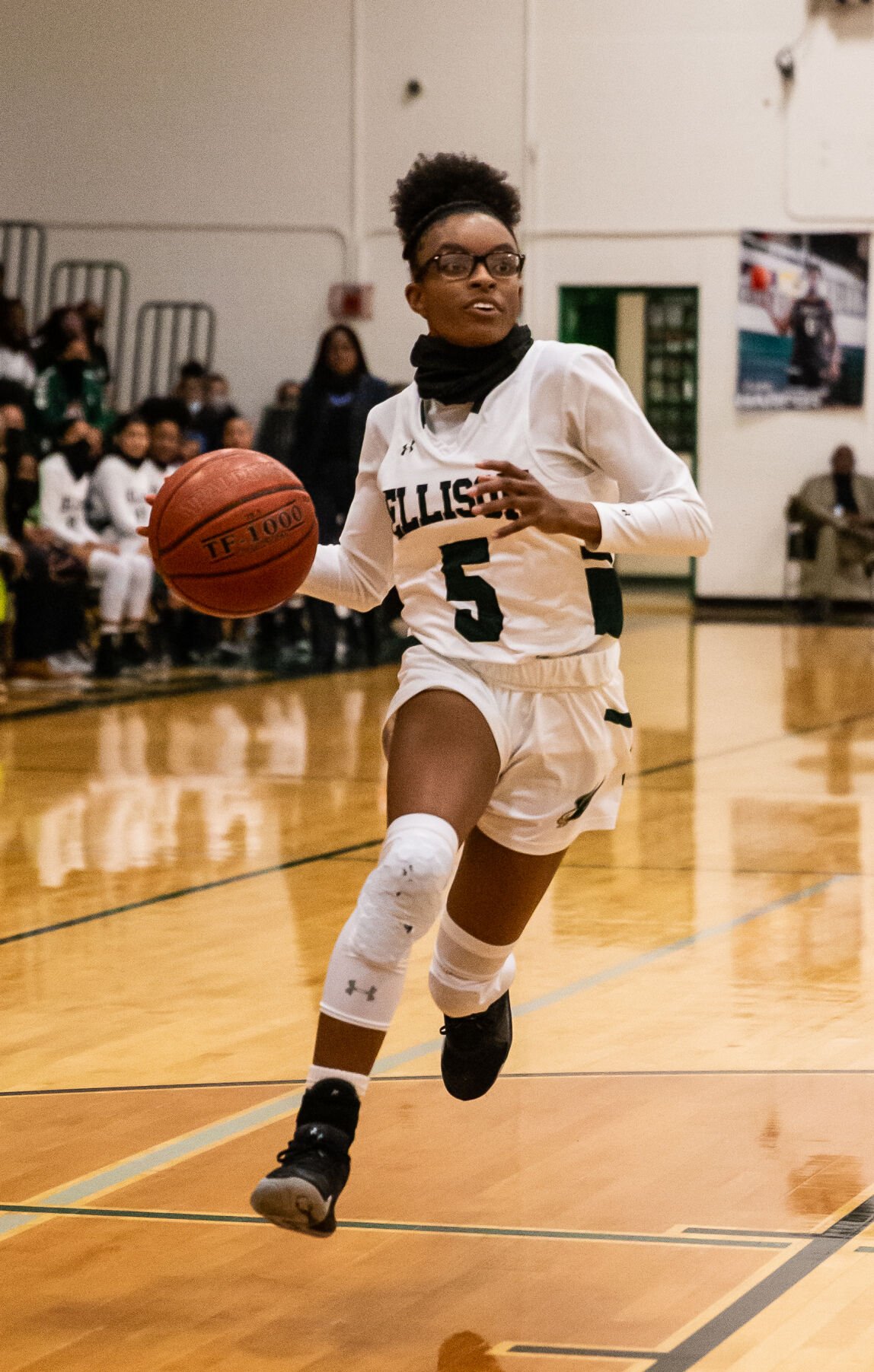 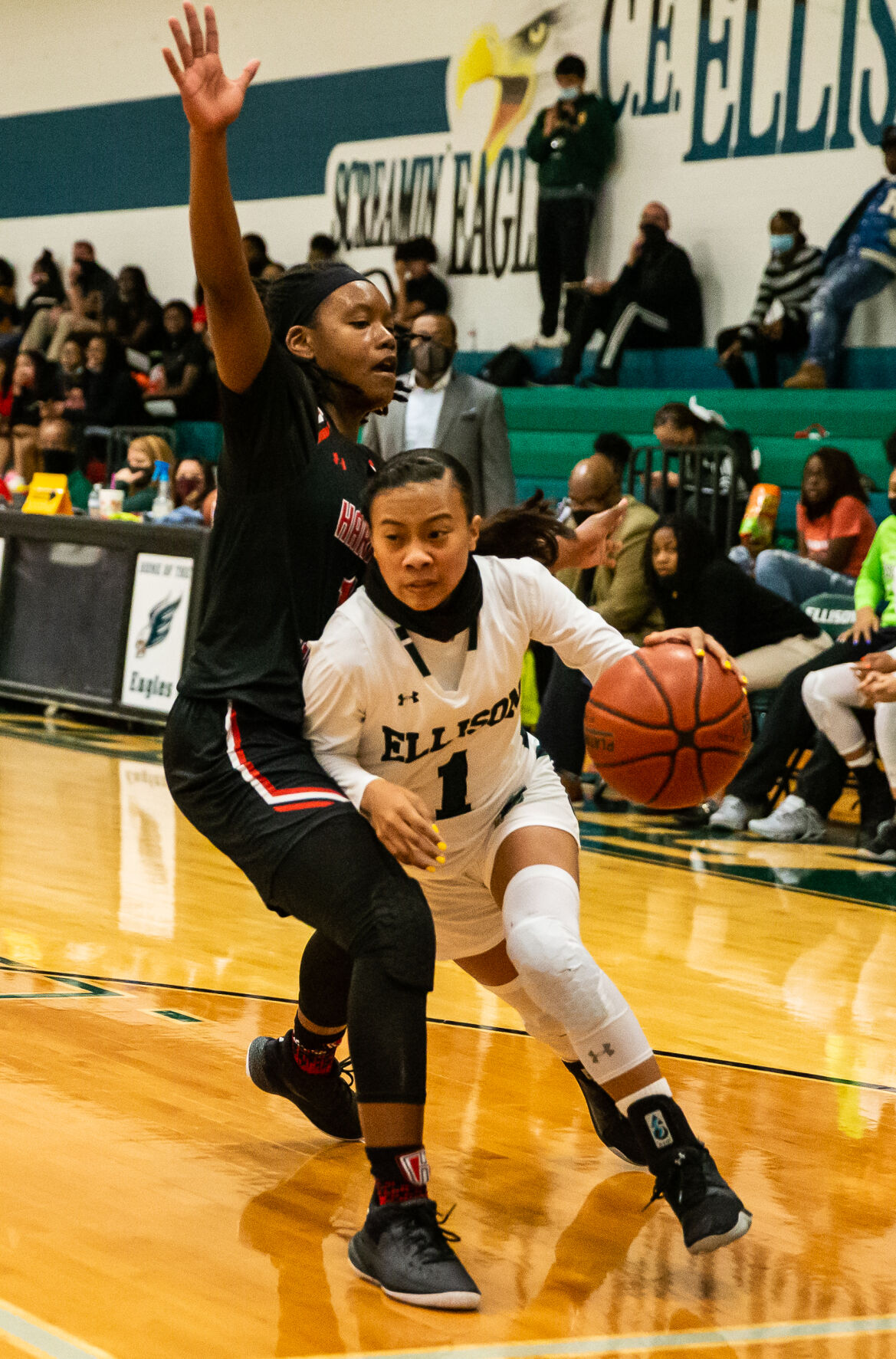 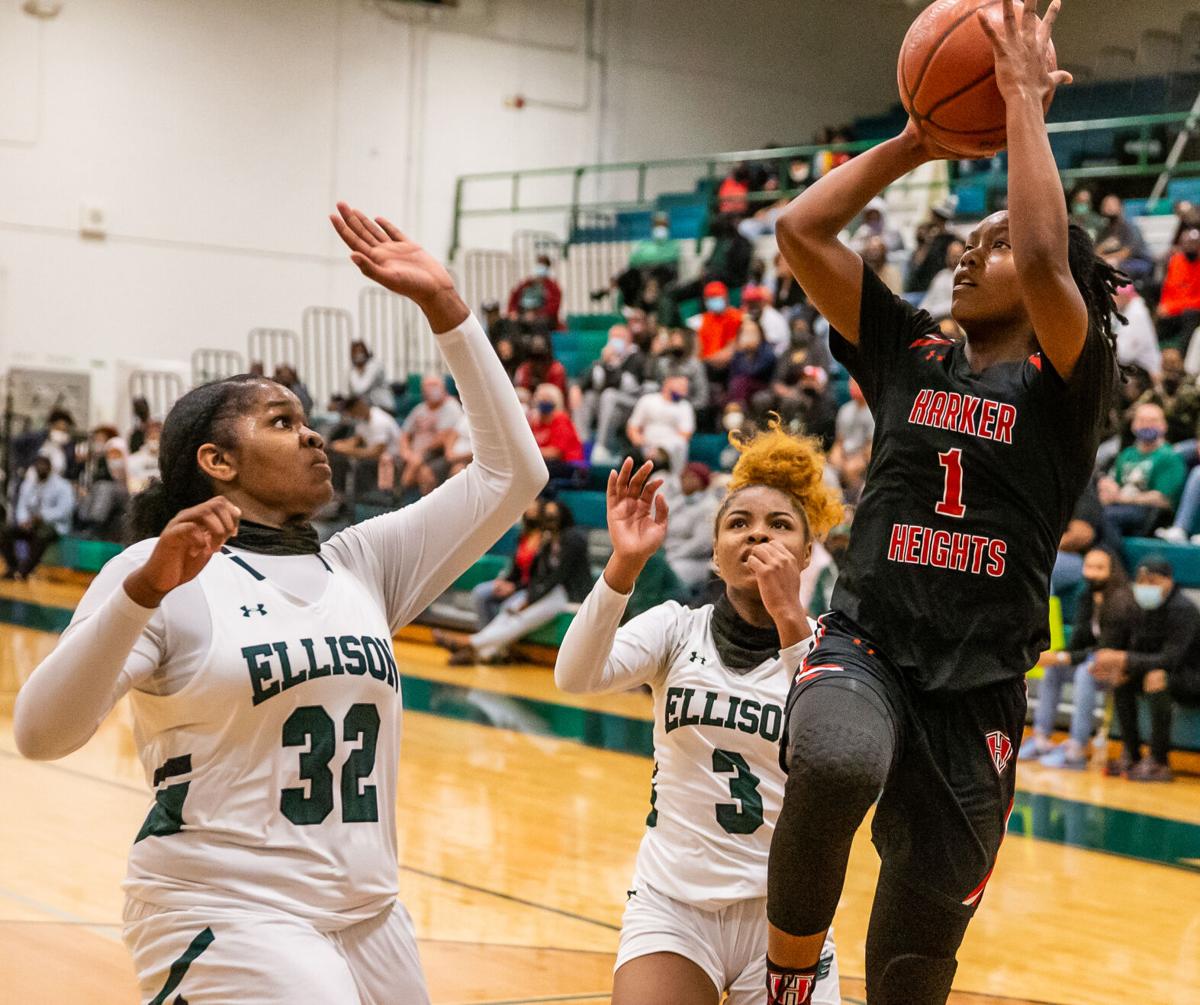 Harker Height’s Empress Roberts (12)  draws a foul on an Ellison defender Tuesday at Ellison. Harker Heights won 60-47 in a battle for sole possession of first place in District 12-6A.

The opportunity to make a statement was there, and in the second half, Harker Heights pounced on it.

Situated in a tie atop the District 12-6A standings, the Lady Knights traveled to Ellison on Tuesday for an encounter with their counterpart in first place, and the contest began as expected.

The squads were never separated by more than seven points in the opening half and were within two points entering the third quarter.

With less than 3 minutes remaining in regulation, however, everything changed.

After the Lady Eagles created a 36-32 advantage, Harker Heights responded with a 28-7 run, propelling it to a 60-47 victory and sole possession of the district lead.

“We had a really great talk at halftime,” she said, “and we got ourselves together. We knew we had to bring a new energy and fight with us.

“We had one more half left, and we needed to give it our all.”

Harker Heights held the lead for a majority of the contest, inflating a 22-20 halftime cushion to seven points, 31-24, but it would not last. Paced by junior guard Evelyn Lorenzo, who recorded nine of her game-high 24 points in the third quarter, Ellison used a 12-1 outburst to move ahead 36-32.

Then, the Lady Knights rallied, closing the quarter with 11 unanswered points before seeing the gap widen to 48-39 on Sierra Brooks’ 3-pointer. It was one of seven shots Harker Heights (9-3, 5-0) hit from behind the arc in the second half after missing all six of its first-half attempts.

“We just ran our plays,” Lady Knights head coach Shirretha Nelson said, “and they all require open players, ball movement and rotation. We always talk about possessing the ball a little bit longer, making the defense collapse and reading the weaknesses.

“We started doing all of that better in the second half.

“We were making good, offensive decisions.”

Lovell was perfect from the floor after halftime, making all six of her field-goal attempts, including three 3-pointers, en route to a team-high 19 points, while Brooks finished with 11 points and game-high six assists.

“I believe in every one of those kids that I put on the floor,” Nelson said. “There is not one that I wouldn’t trust to take a big shot.

“It doesn’t matter who it is, and I think that’s what hurt us in the first half – we tried to force things that weren’t there. … Once we started to play as a team, we played much better, because this group is a great team.”

Now, the Lady Knights will attempt to carry the momentum forward as they prepare to host Killeen on Friday, while the Lady Eagles, who had not lost since Nov. 20, will look to rebound at home against Belton.

“We just want to defend our title from last year,” Lovell said. “We had to play hard.

“Now, this should make us want to work even harder. We cannot take any competition lightly.”

Regardless of what happens moving forward, Nelson knows her team made a statement.

“This is a big deal,” she said, “because it is always hard to play Ellison at its home. It is always a competitive game anytime we meet.

“They have such a tradition of confidence and discipline, so it is always nice to get a win here, because it just means a little bit more.”