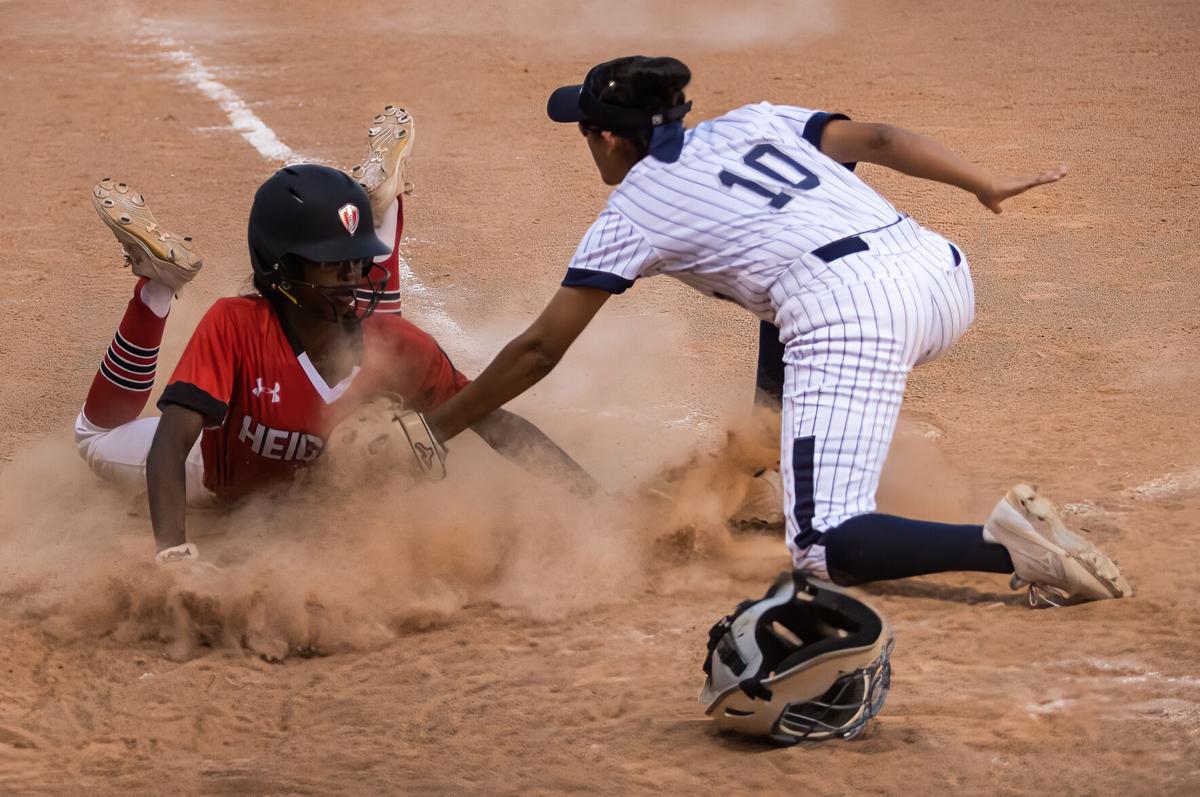 Harker Heights’ Kadazjah Trimble, left, is tagged out at home plate by Shoemaker’s Madelyn Morua (10) on Tuesday at Shoemaker. 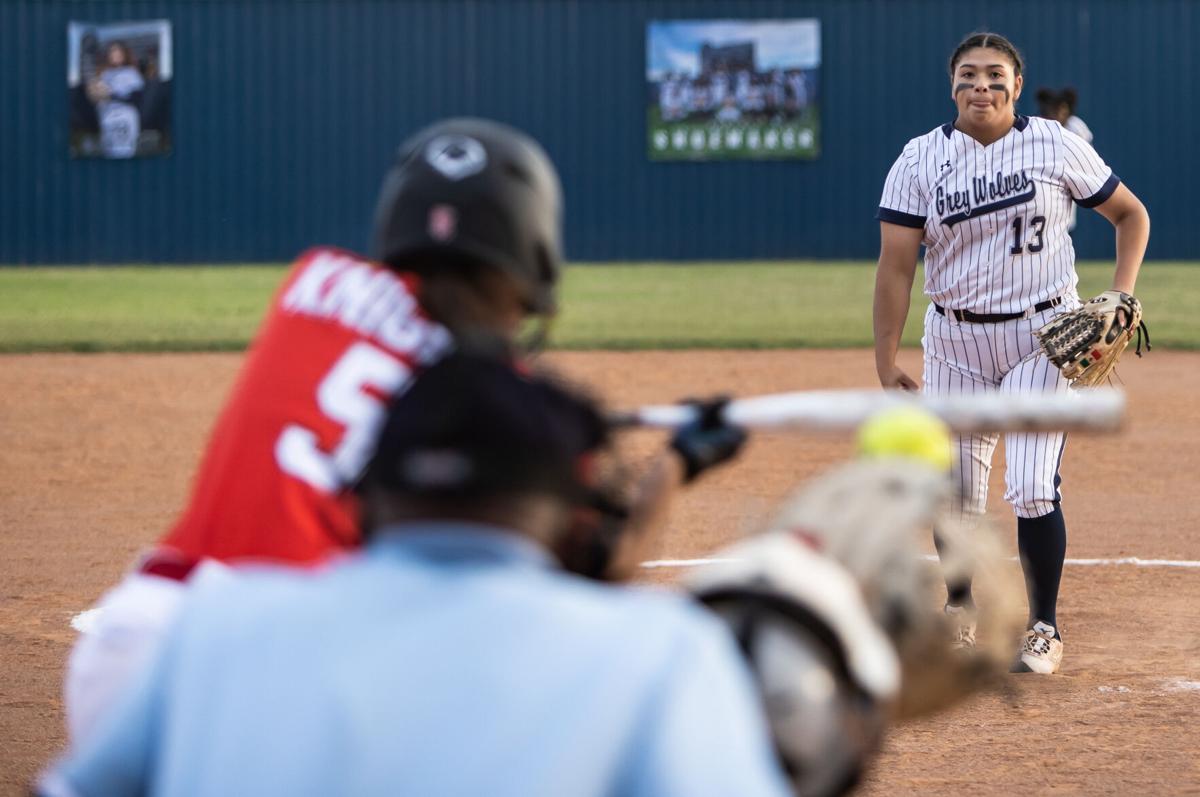 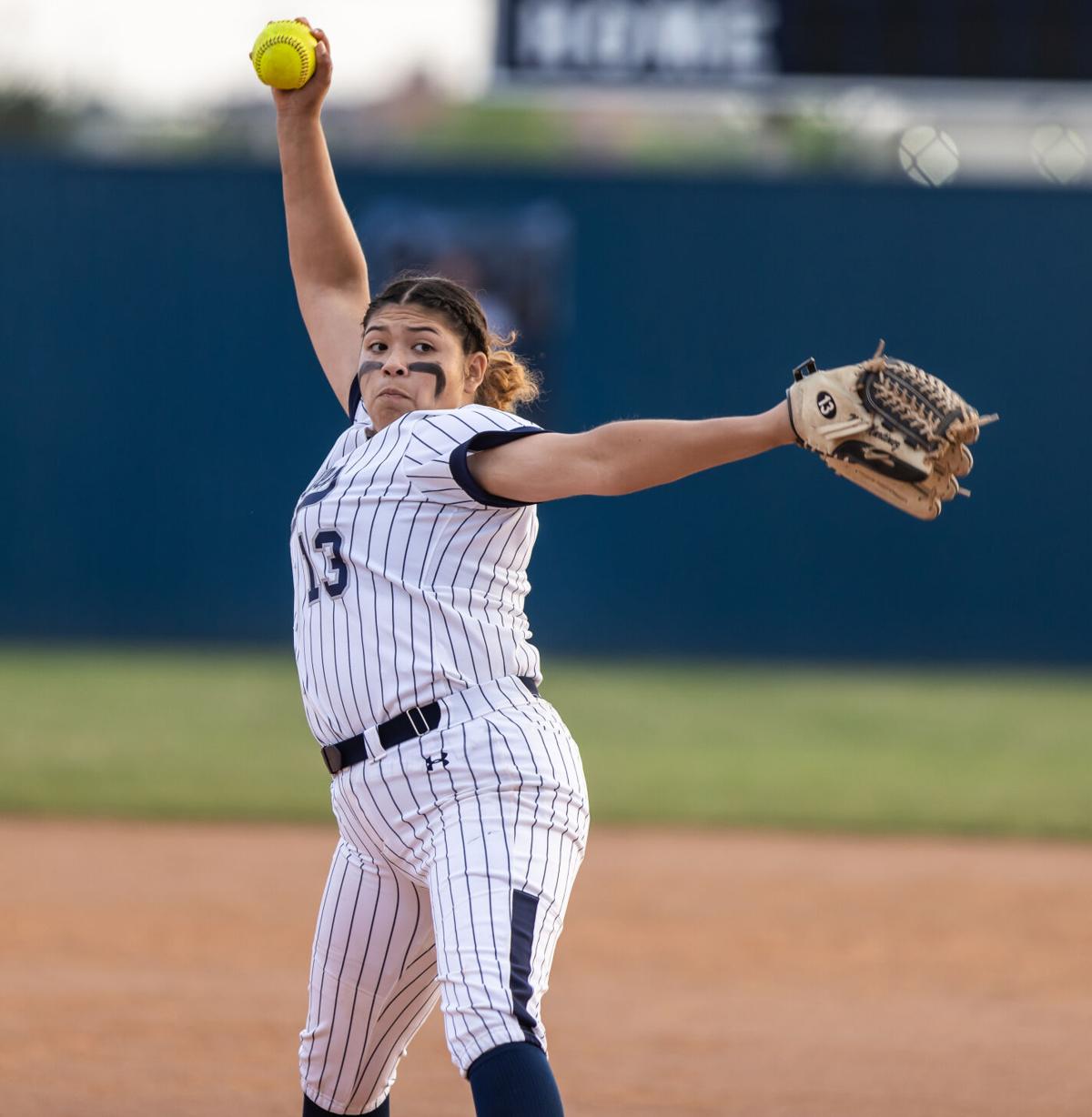 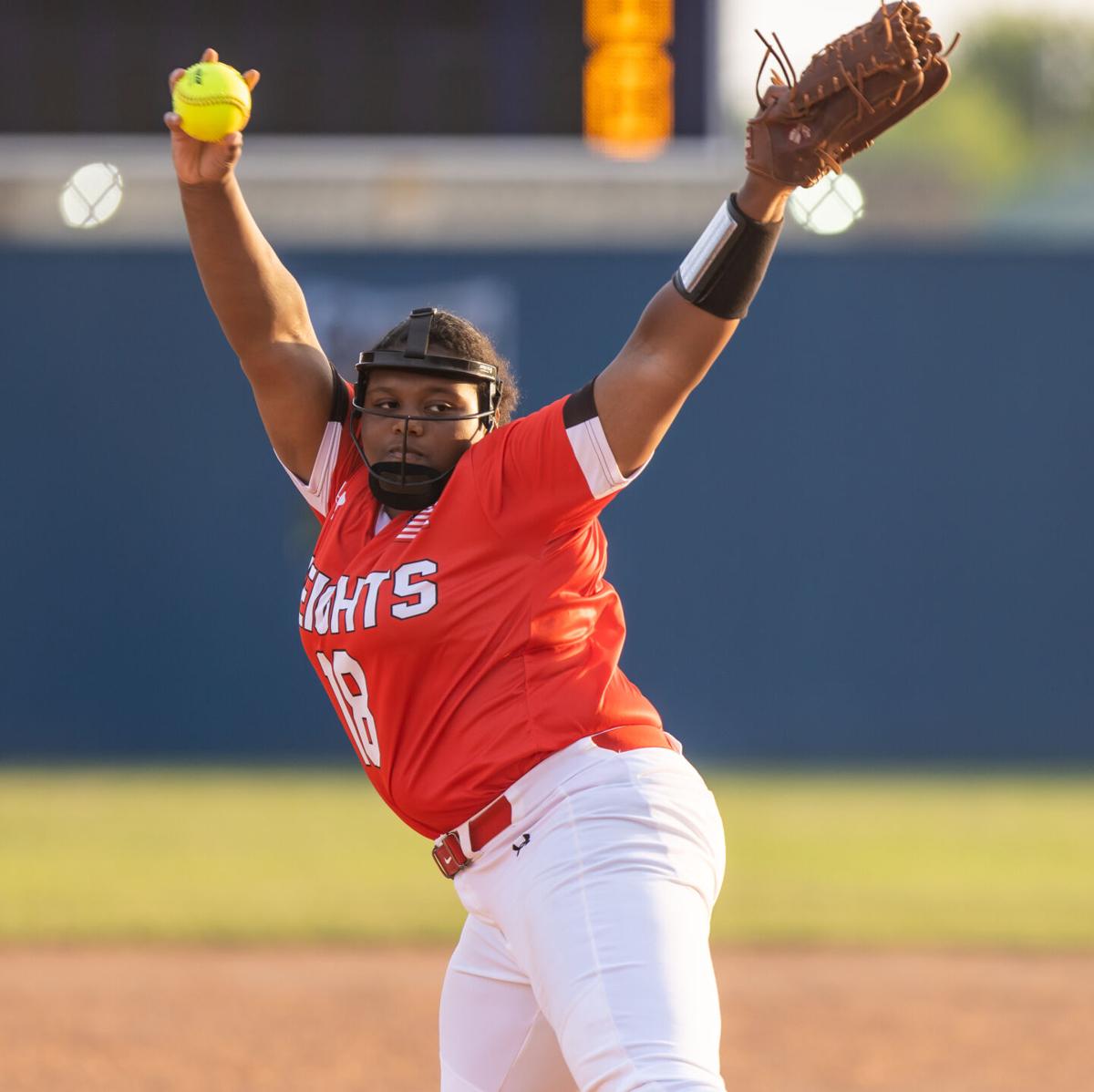 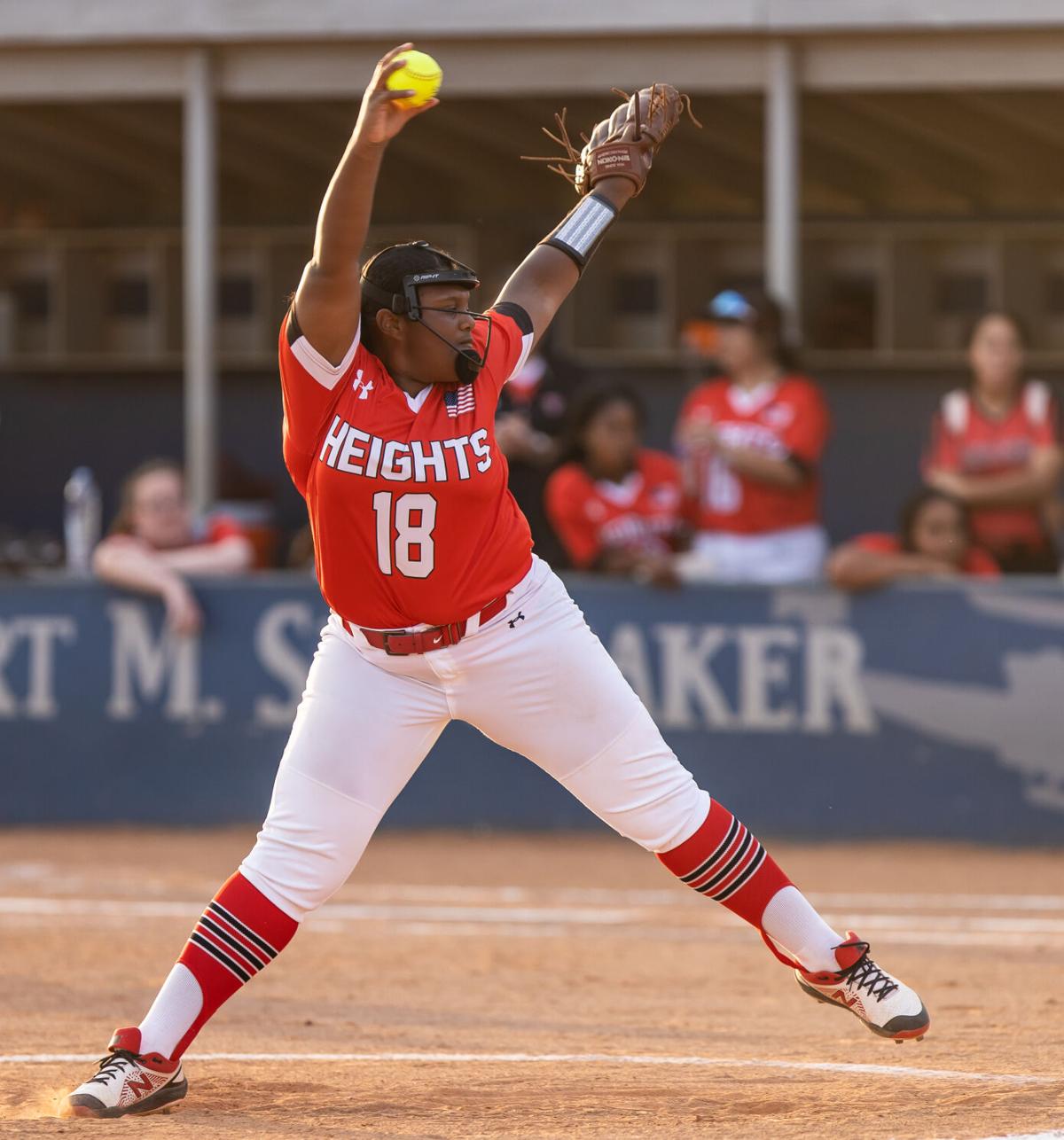 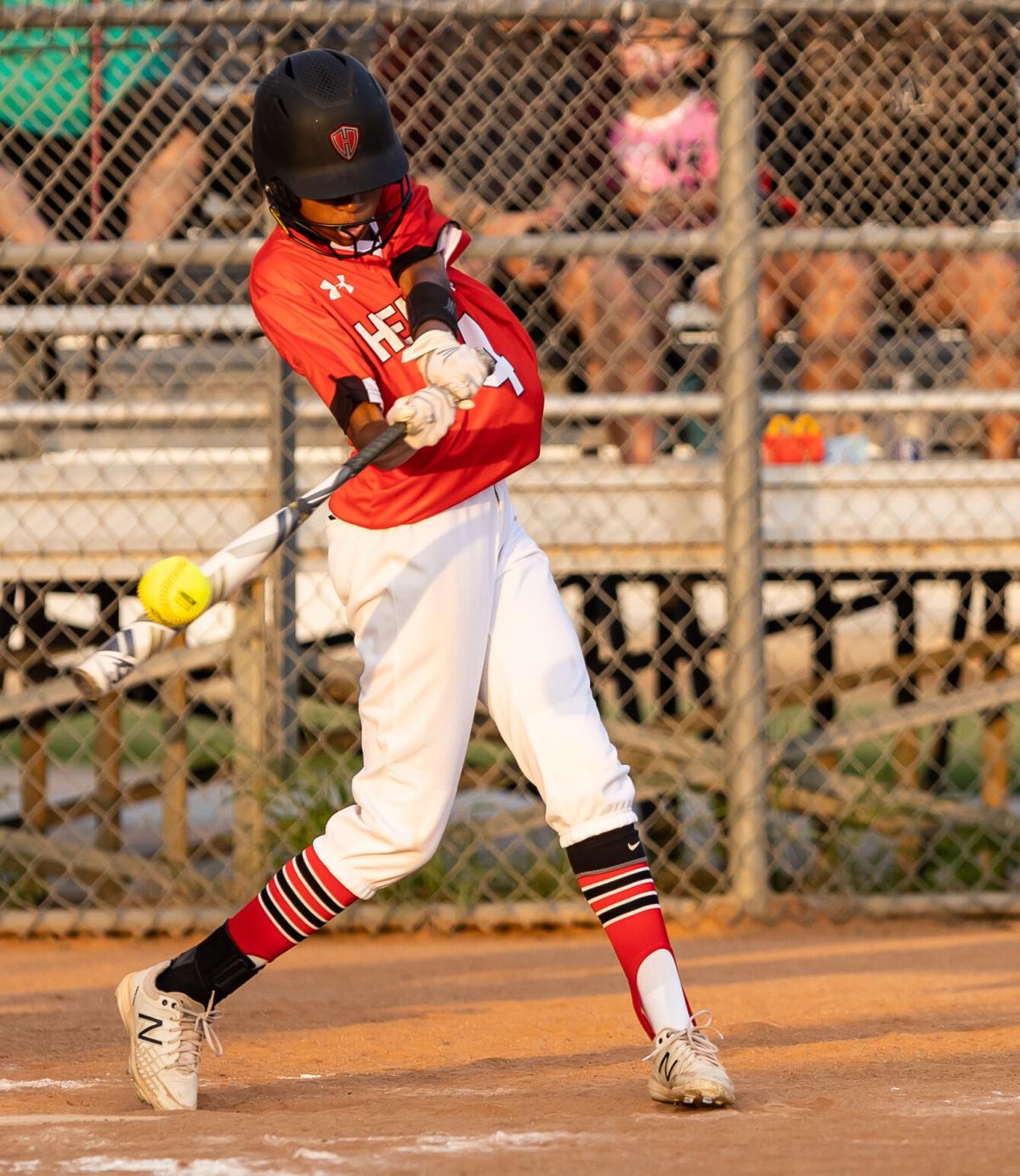 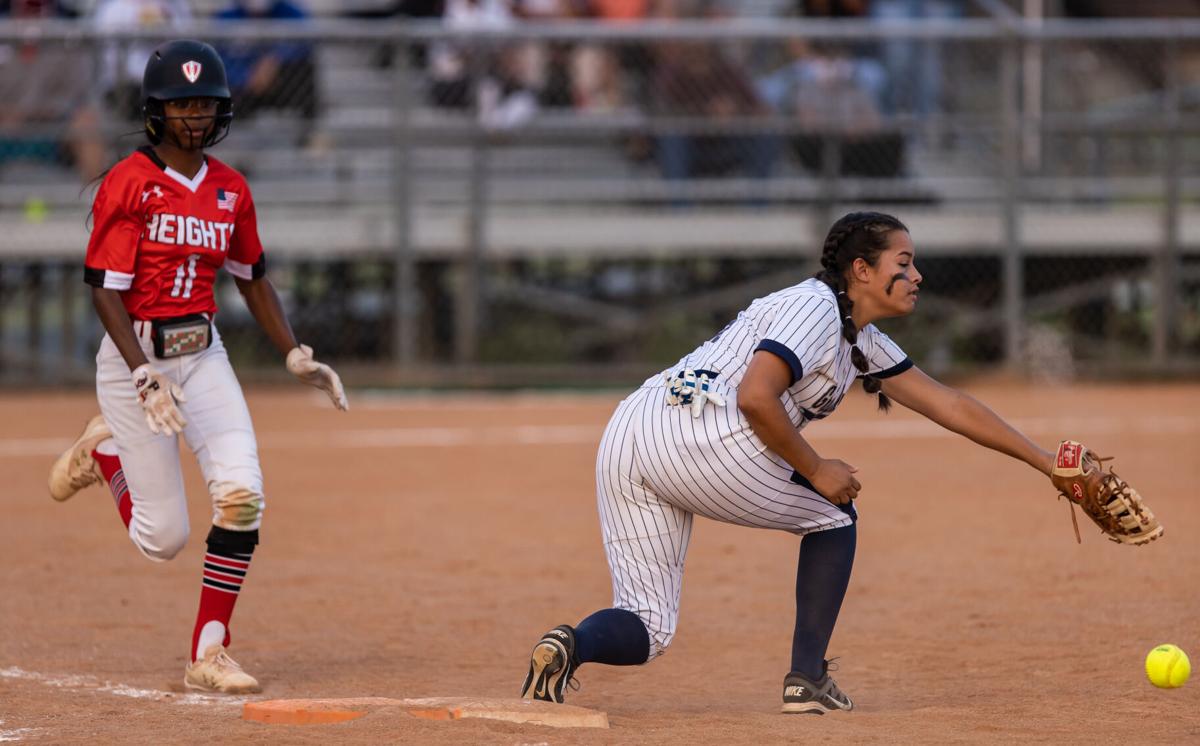 Harker Heights' Kadazjah Trimble (11) is safe at first base as the throw to Shoemaker's Thatiana Gonzalez is off target at Shoemaker High on Tuesday, April 13, 2021. 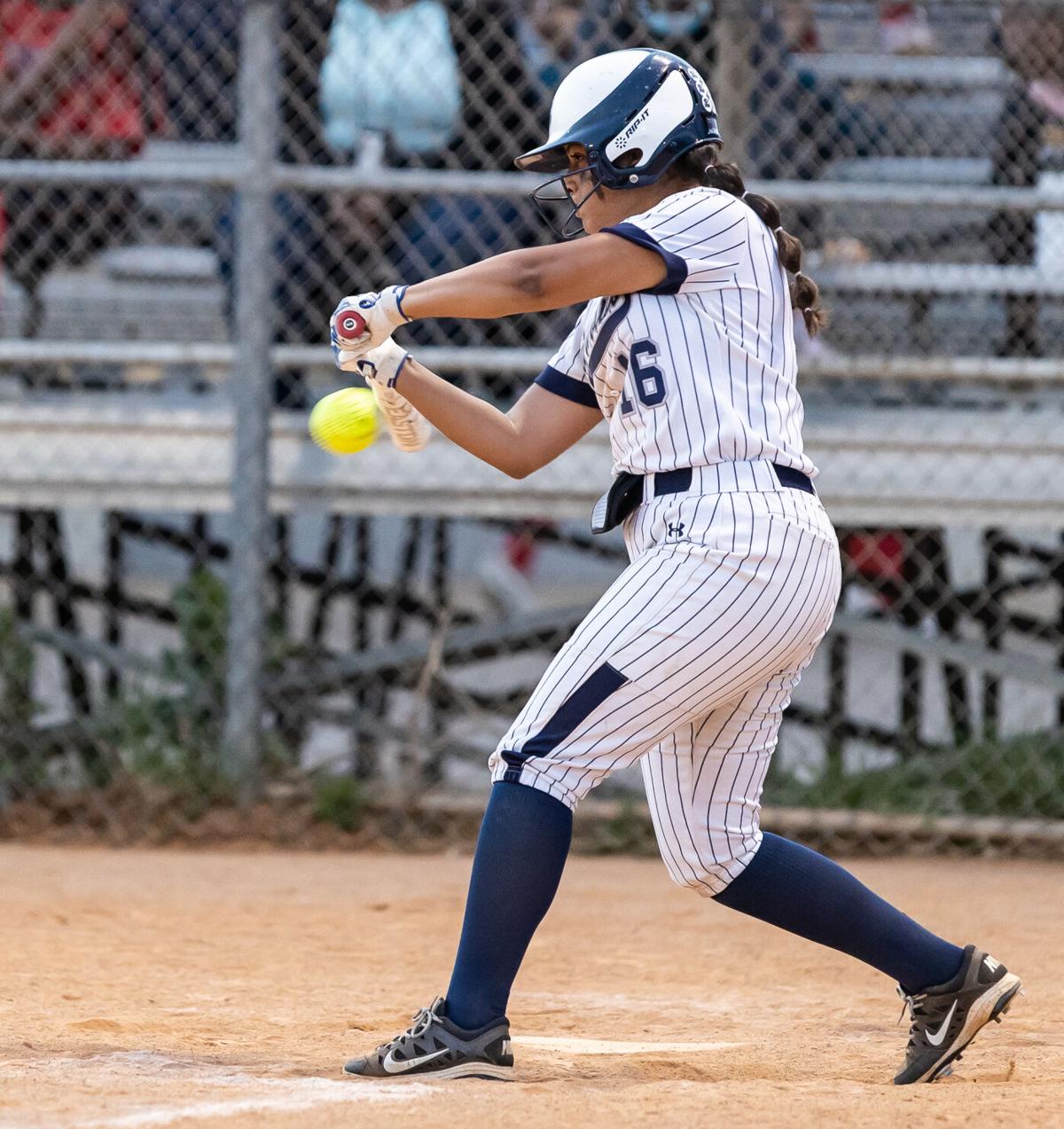 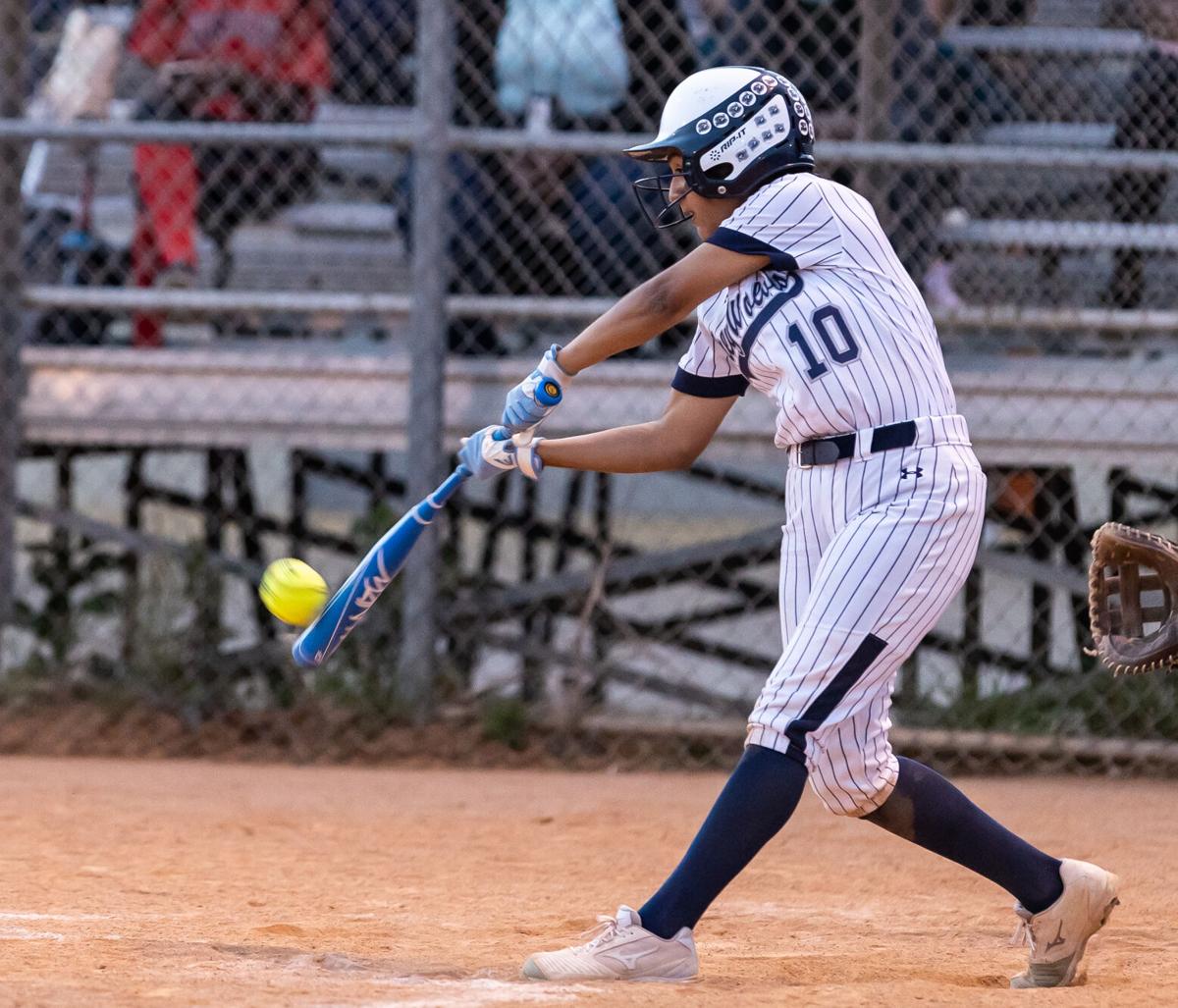 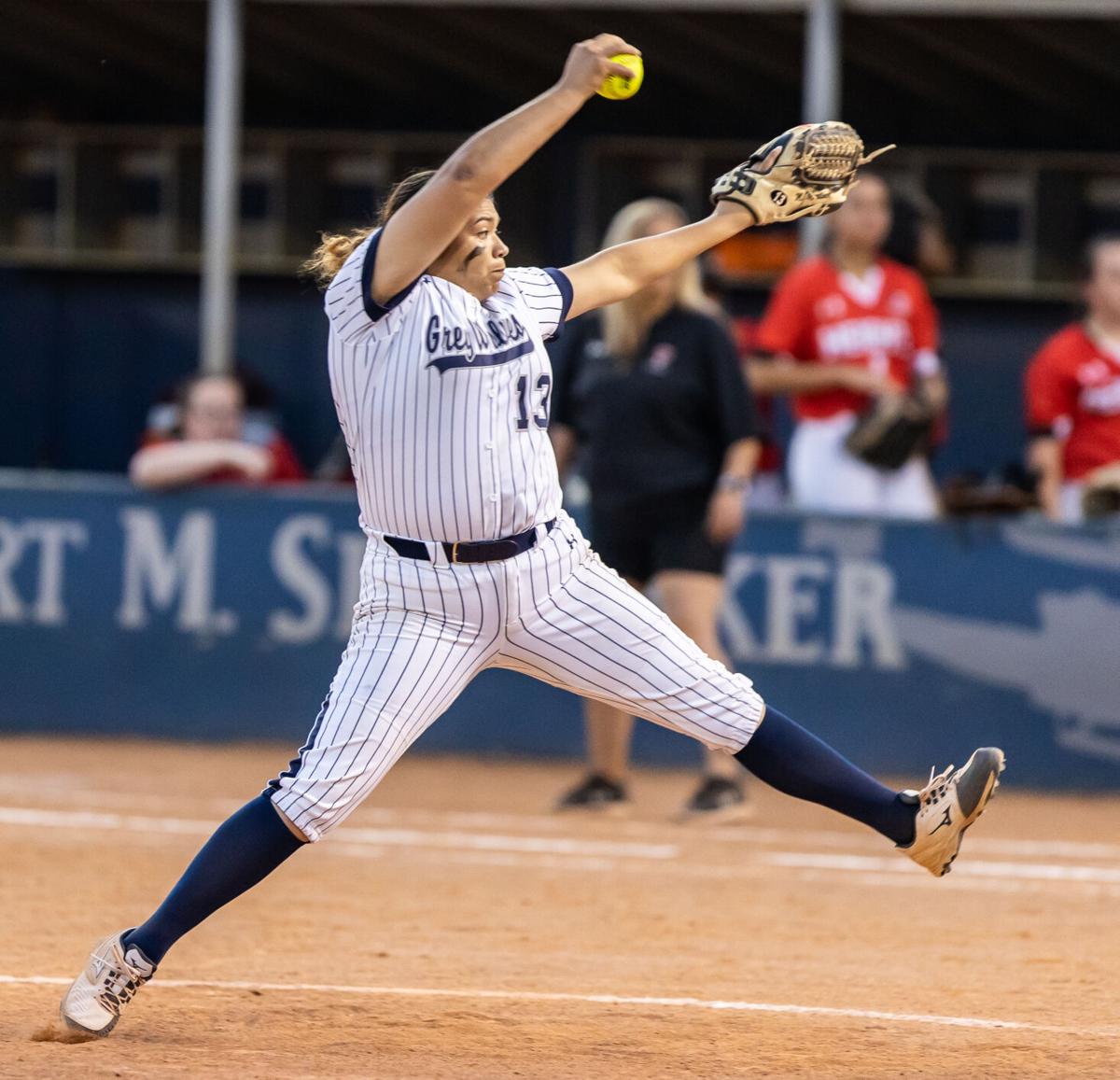 Shoemaker's Madalyne Martinez pitches against Harker Heights at Shoemaker High on Tuesday, April 13, 2021. She is one of 38 athletes from KISD signing a letter of intent to compete in college on May 19. 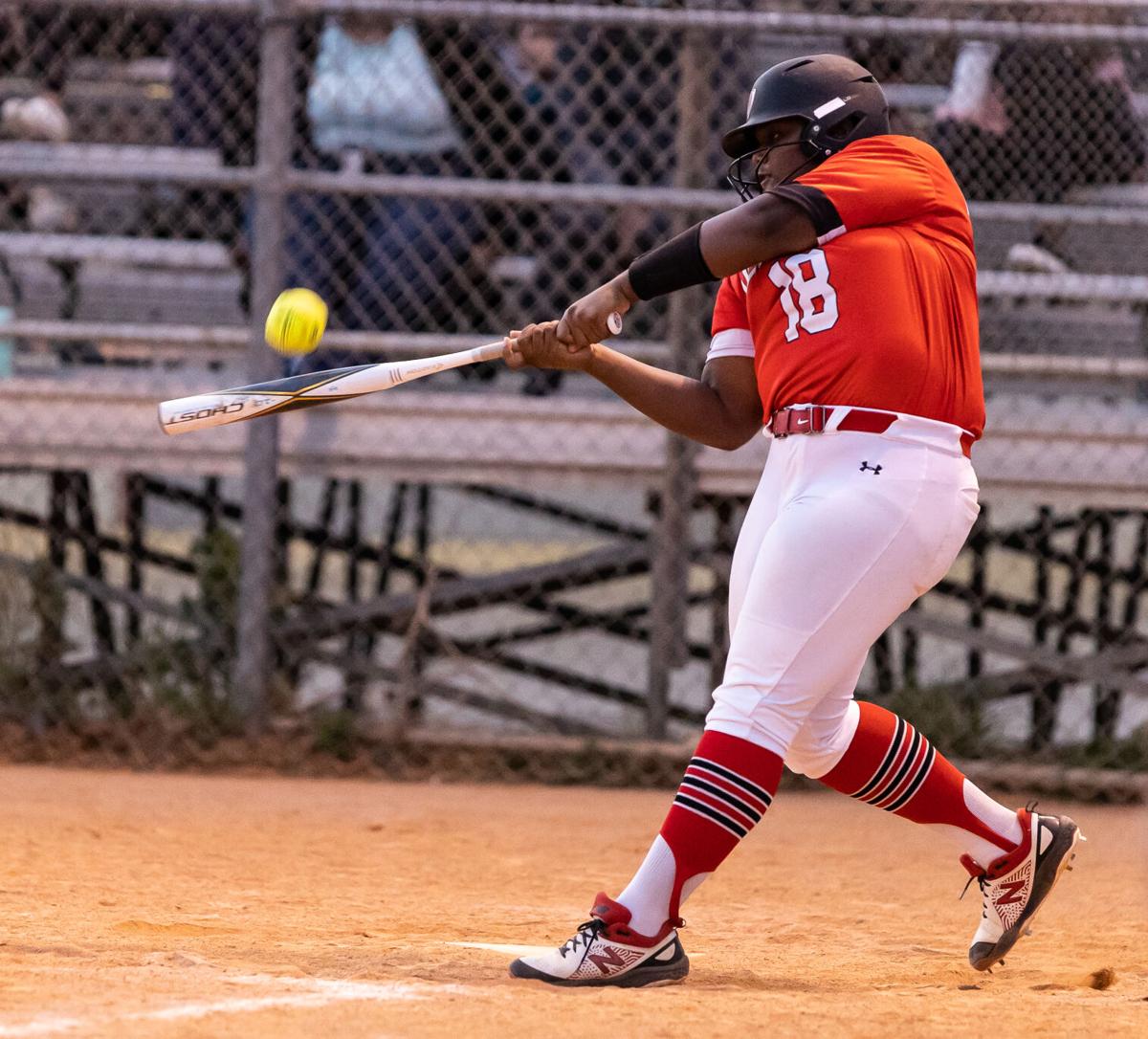 Harker Heights’ Kadazjah Trimble, left, is tagged out at home plate by Shoemaker’s Madelyn Morua (10) on Tuesday at Shoemaker.

Harker Heights' Kadazjah Trimble (11) is safe at first base as the throw to Shoemaker's Thatiana Gonzalez is off target at Shoemaker High on Tuesday, April 13, 2021.

Shoemaker's Madalyne Martinez pitches against Harker Heights at Shoemaker High on Tuesday, April 13, 2021. She is one of 38 athletes from KISD signing a letter of intent to compete in college on May 19.

Evan Fuller was at a loss.

Competing in a contest filled with playoff implications, Harker Heights struggled offensively against Shoemaker. Going into the eighth inning of a scoreless tie, the Lady Knights delivered just four hits, with center fielder Fuller striking out in each of her three at-bats.

So, when she returned to the plate with one out and a runner on second base, Fuller knew somehow she had to produce.

The junior sent a pitch over the center field wall, propelling Harker Heights to a 2-0 victory, and following the win, Fuller admitted she was searching for a solution in her final at-bat.

“I really had to hunker down,” Fuller said, “because I had struck out three times. I just had to shake that off, come back up and do something.

“I didn’t expect that, but it happened, and it was successful. That really helped us a lot.”

The Lady Knights secured the outcome with a three-up, three-down bottom of the eighth inning highlighted by a pair of strikeouts from pitcher Nevaeh Brown, who missed the previous two and a half weeks of competition due to an injury.

She showed little rust, though.

Brown finished with 14 strikeouts and allowed just a single hit in the complete-game victory.

“It felt good to be back on the field,” the freshman said. “I was a little anxious, but I knew I had to pull through for my team.

“I just had to trust my mechanics and trust that my defense would have my back.”

Shoemaker pitcher Madalyne Martinez, who recorded 14 strikeouts in the loss, was responsible for the Lady Grey Wolves’ lone hit, connecting for a single in the team’s opening at-bat. Shoemaker players reached base just five other times with only one rounding second base.

While Harker Heights (14-9, 6-5 District 12-6A) kept the Lady Grey Wolves in check at the plate, the Lady Knights also failed to deliver on multiple occasions.

In the third and fifth innings, Harker Heights managed to load the bases only to produce no result, and Lady Knights head coach Kye Robertson understood the importance of such mistakes.

“We knew it was going to take a lot of small ball to be successful,” he said. “We needed to bunt, moverunners over and get into situations where we just needed that one hit.

“It didn’t happen until the eighth inning, but the girls stayed together, stayed poised and knew they were ready to bust out.”

The win virtually locks up a playoff spot for the Lady Knights, who sit in fourth place and hold a two-game advantage over Ellison and Shoemaker (12-15, 4-7) with three game remaining in the regular season.

The Lady Knights host Killeen (0-11) on Friday with an opportunity to take one step closer to returning to the playoffs for the first time since 2004, making Tuesday’s win even more important, according to Robertson.

“This was a critical game,” he said. “We knew coming in that if we were to drop this one that it would open the door for other teams to get in the playoffs and put us in a bad spot.

“We knew what was at stake, and I’m most proud of the fact that my girls knew what this game meant regardless of if we won or lost, and they stuck together. They just wanted it.”

12-6A SOFTBALL: Owens delivers big hit for playoff-bound Belton in win at Ellison

There was no doubt in her mind.