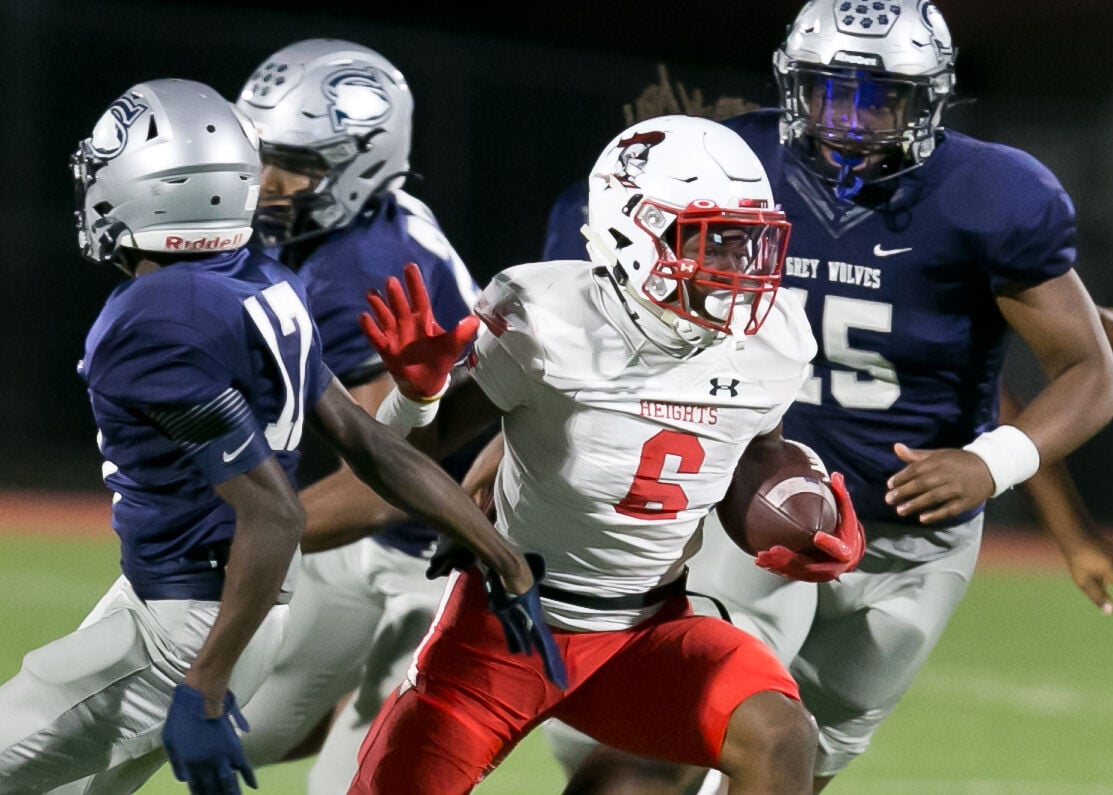 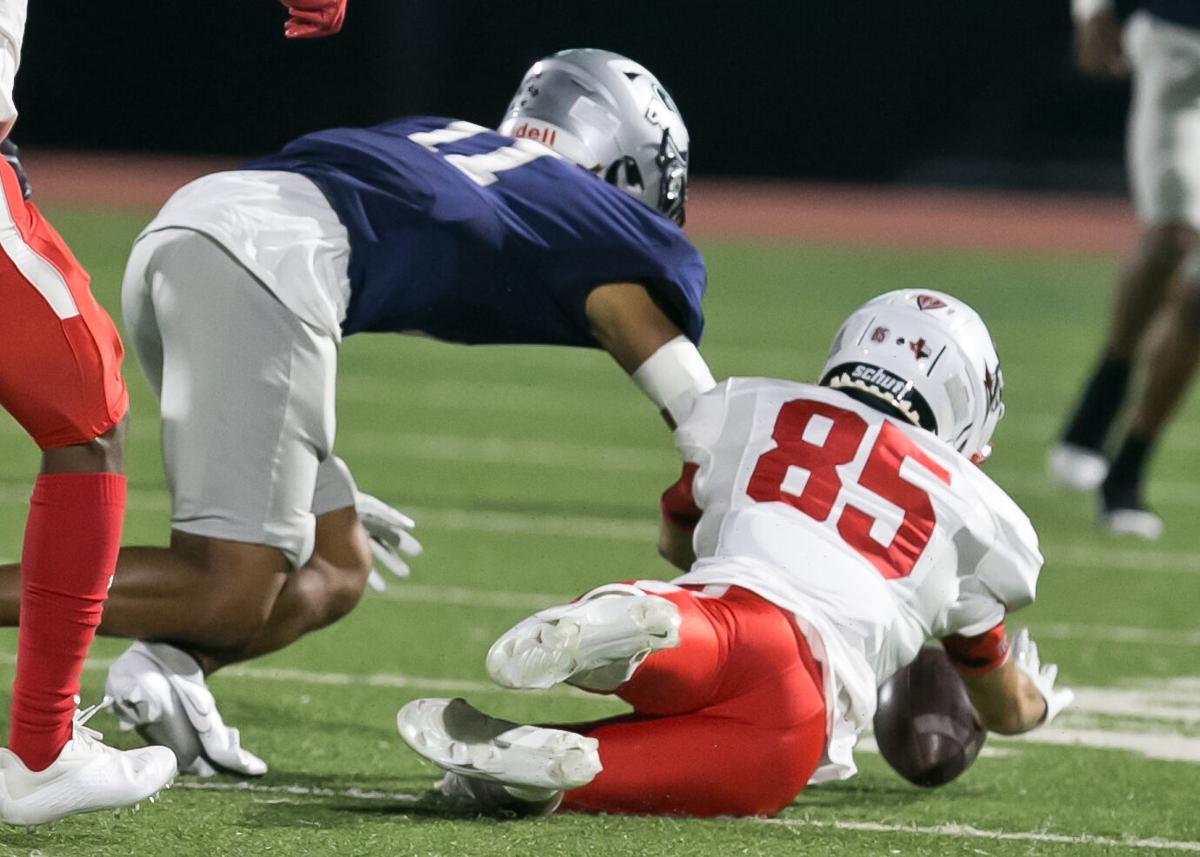 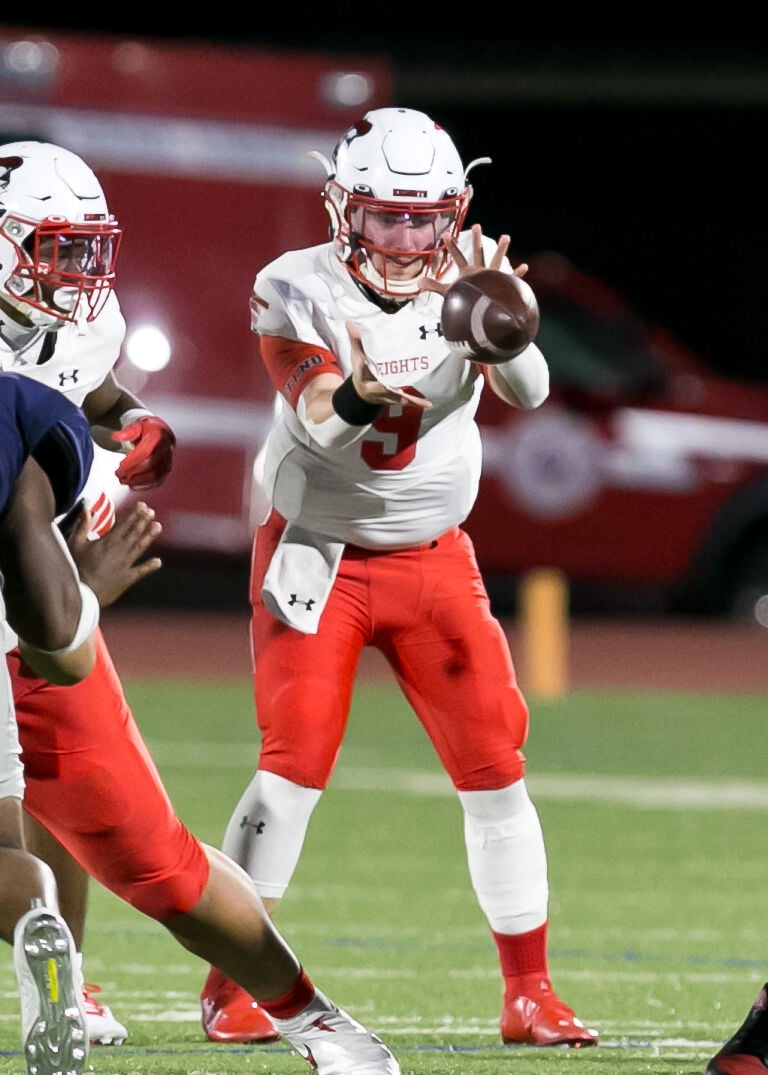 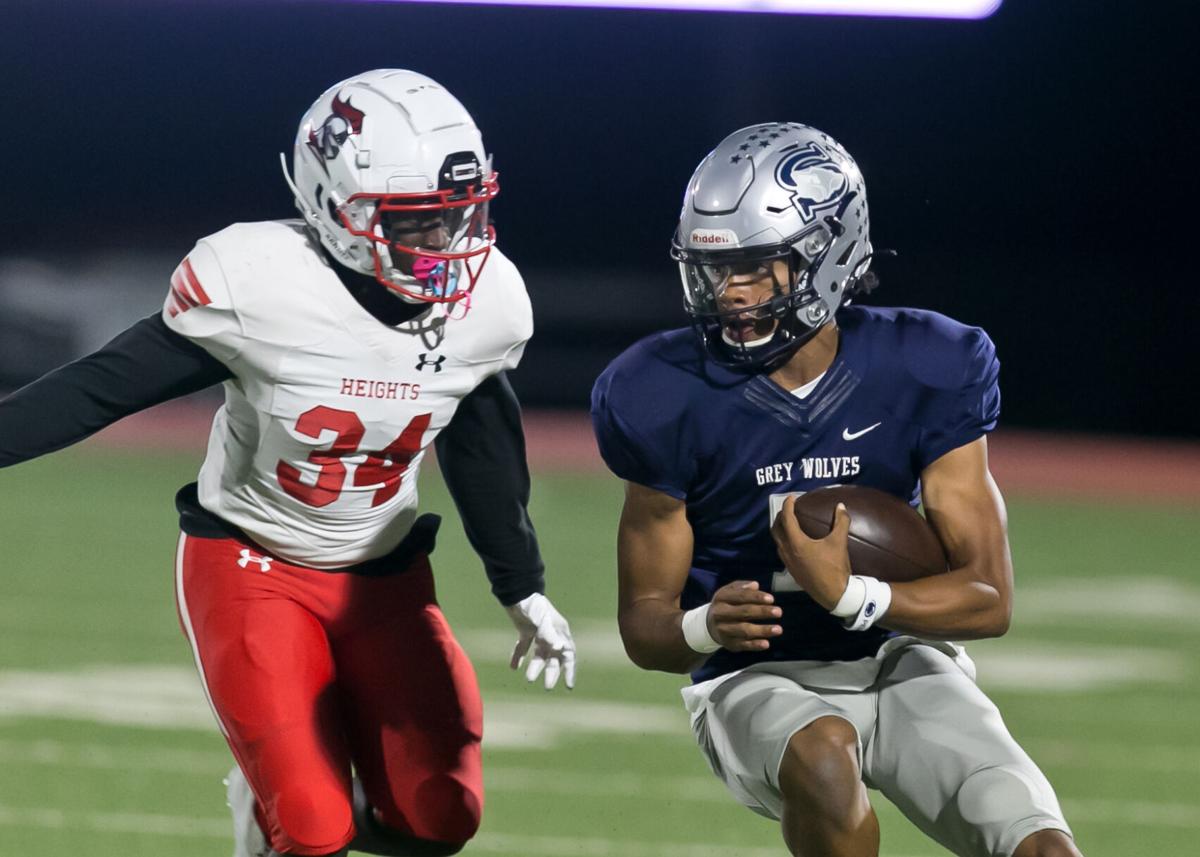 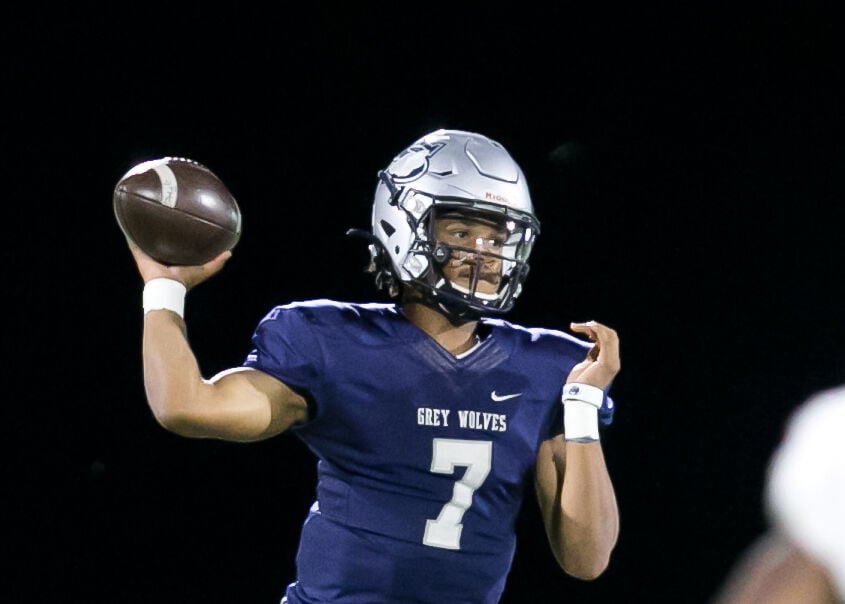 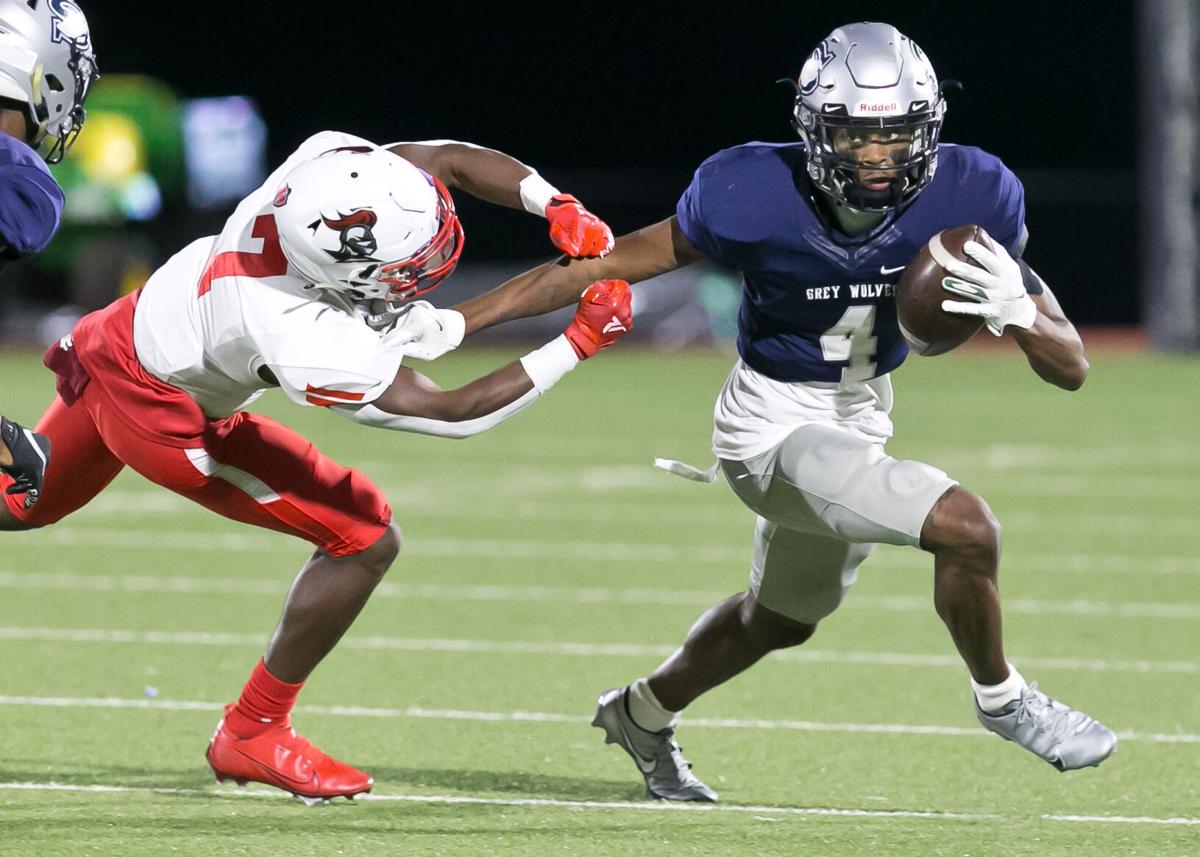 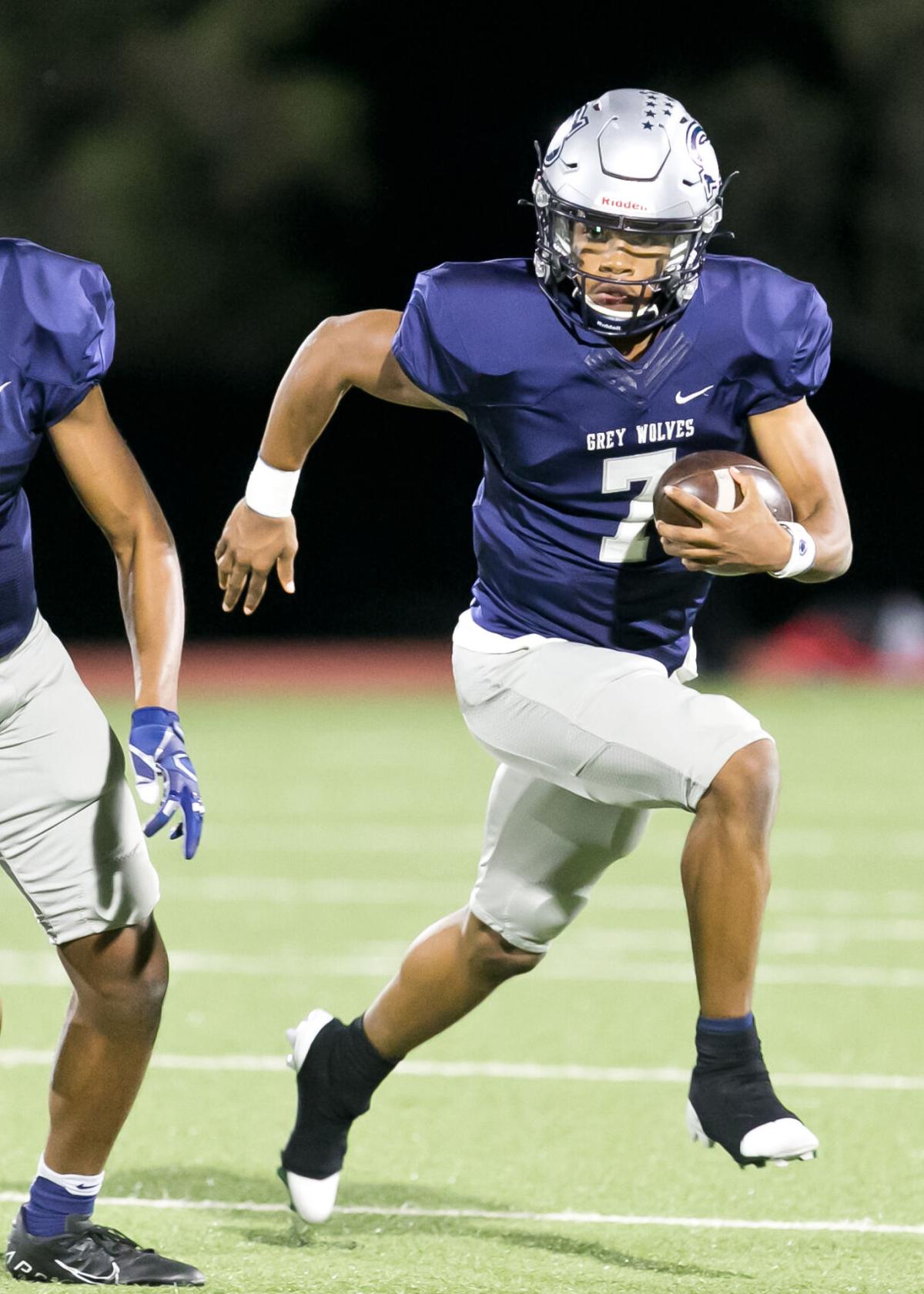 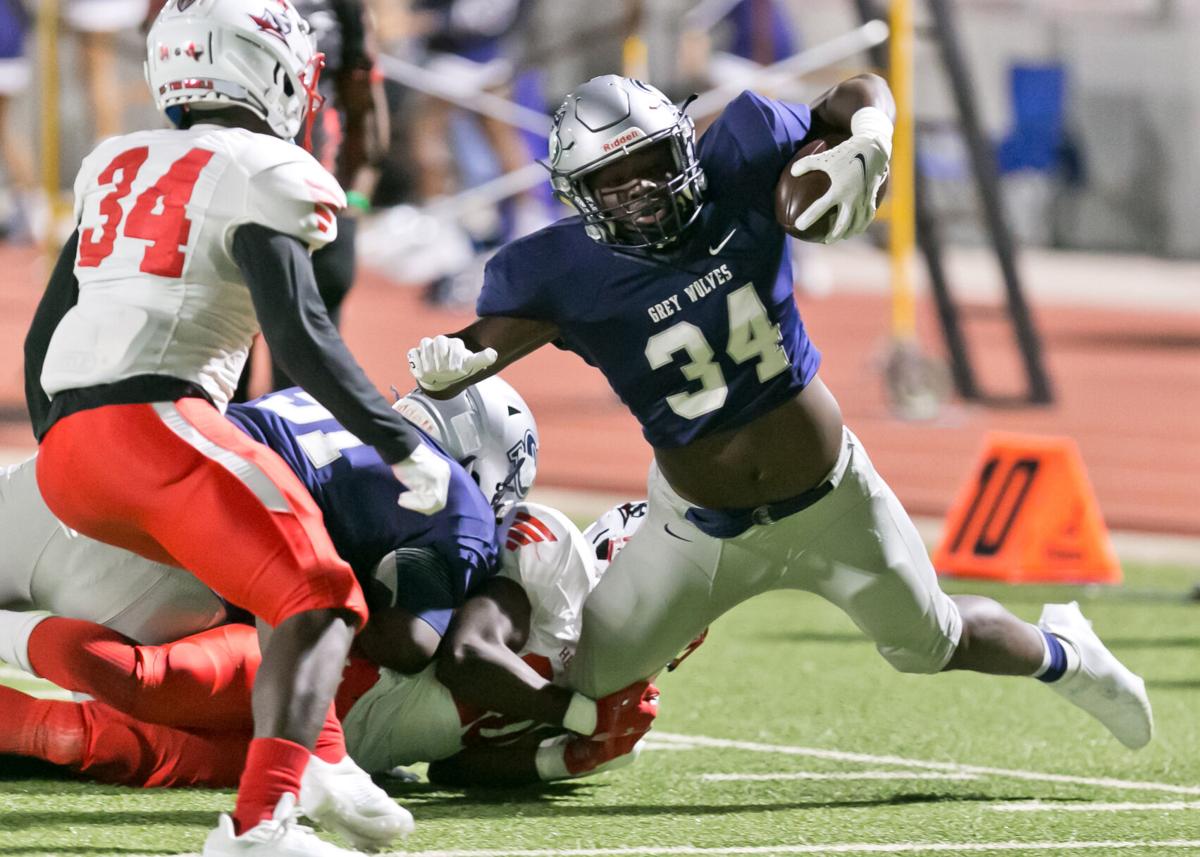 Shoemaker's Peydon Horace (34) stretches for the goal line for a touchdown against Harker Heights on Friday at Leo Buckley Stadium. 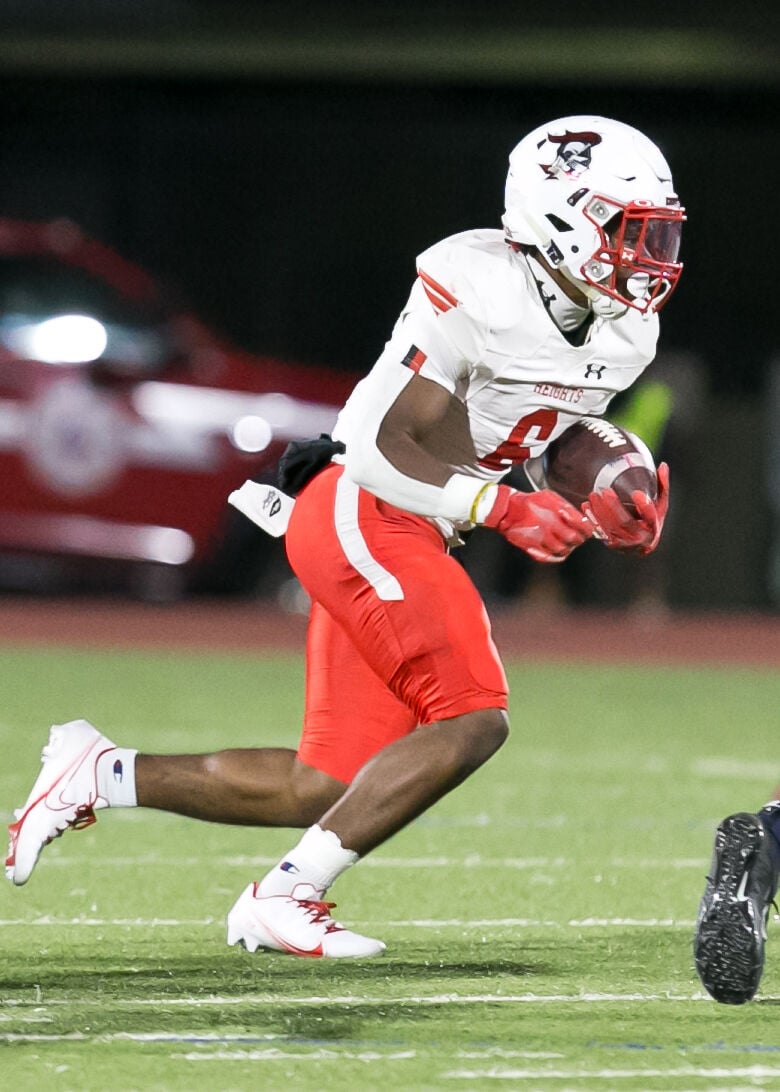 Harker Heights' Re'Shaun Sanford (6) runs out of the backfield against Shoemaker on Friday at Leo Buckley Stadium. 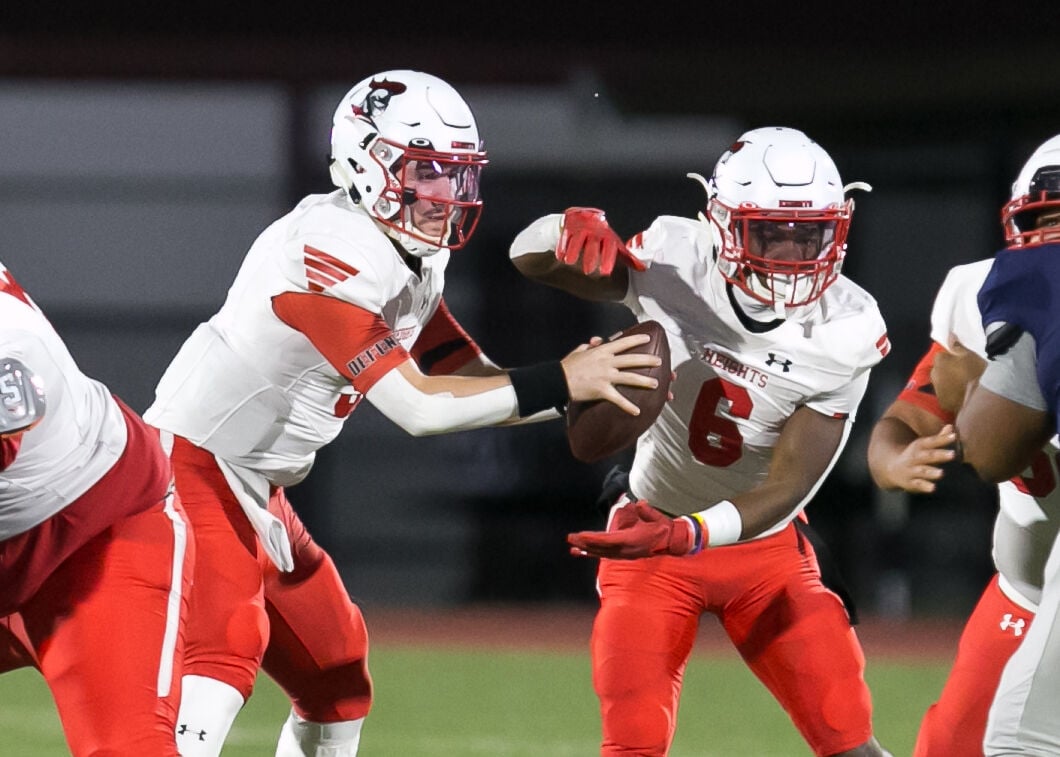 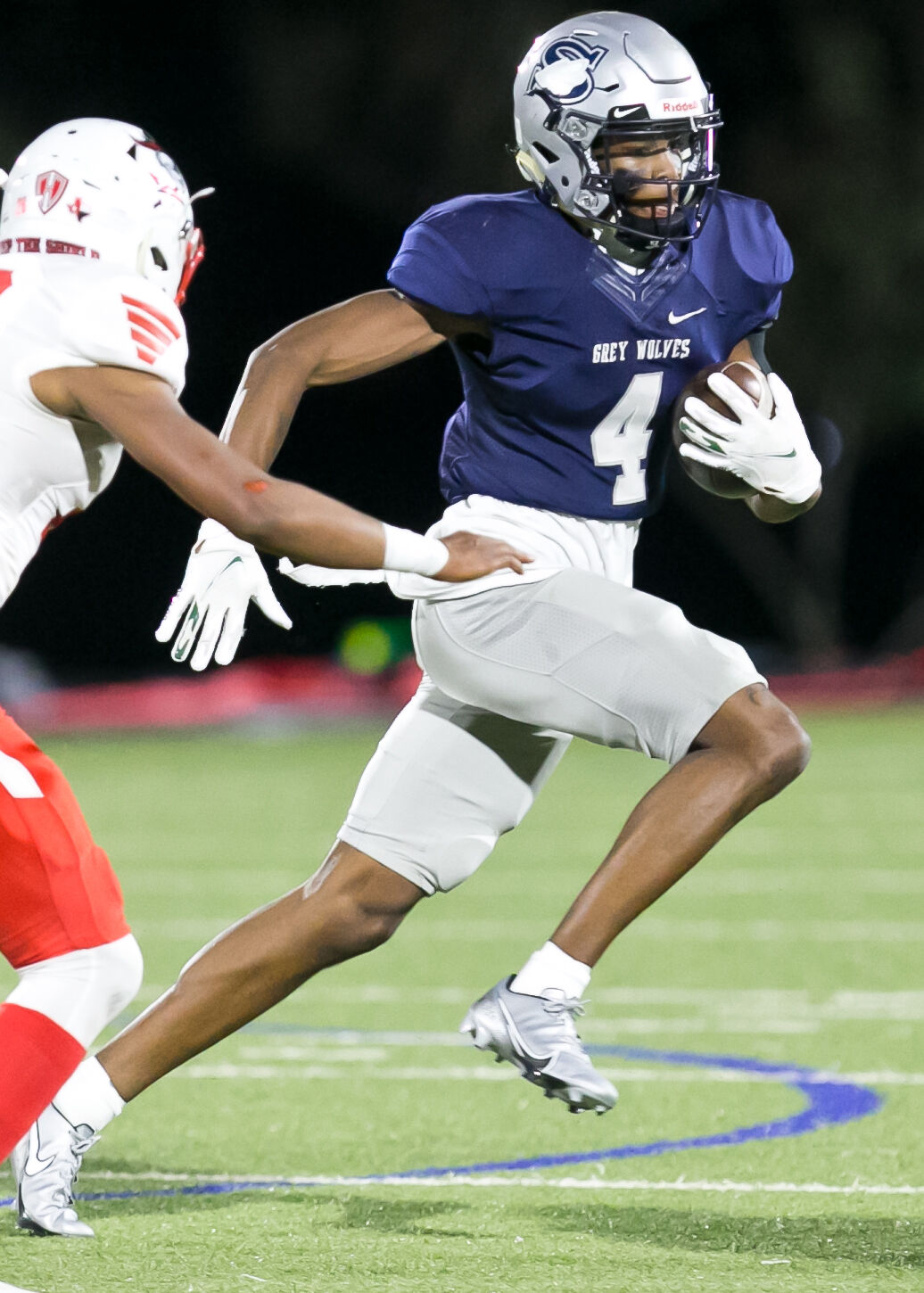 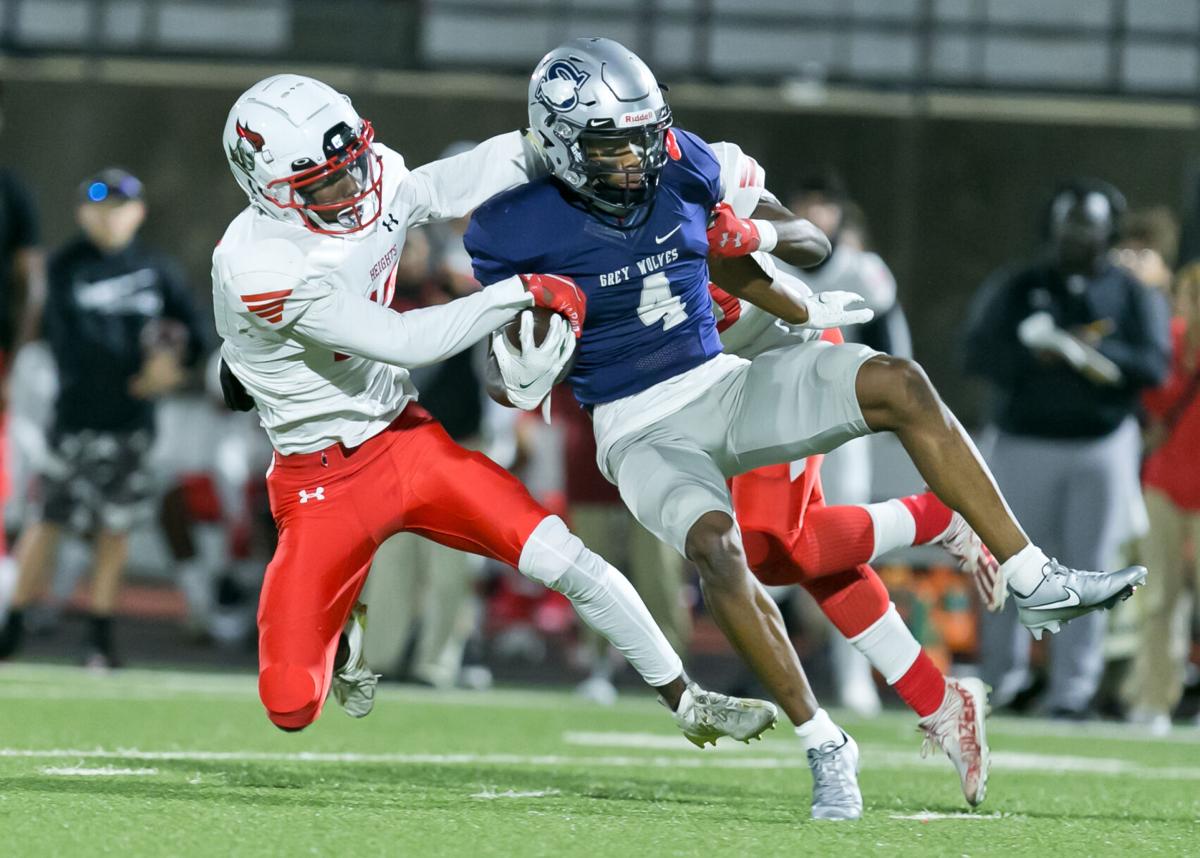 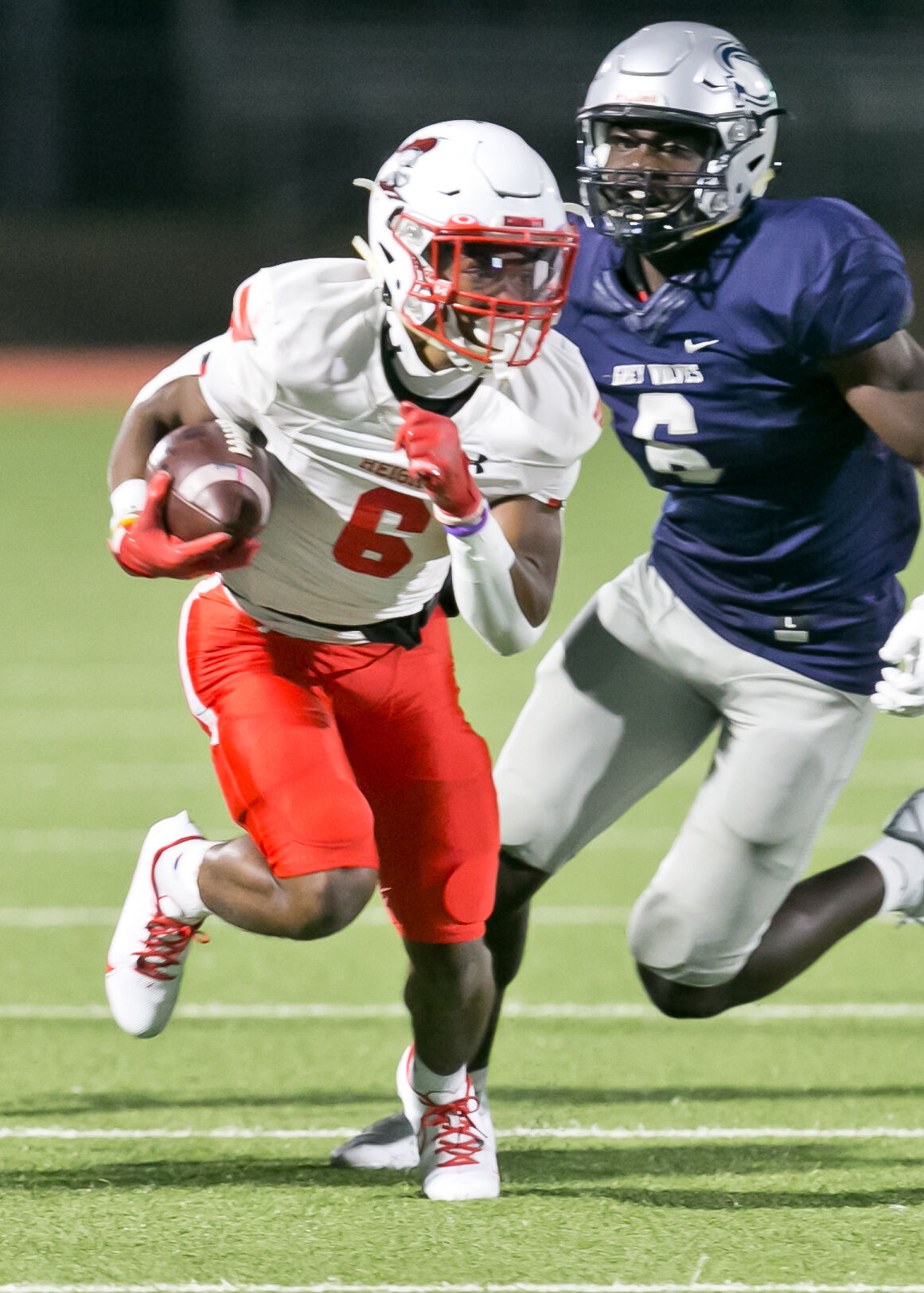 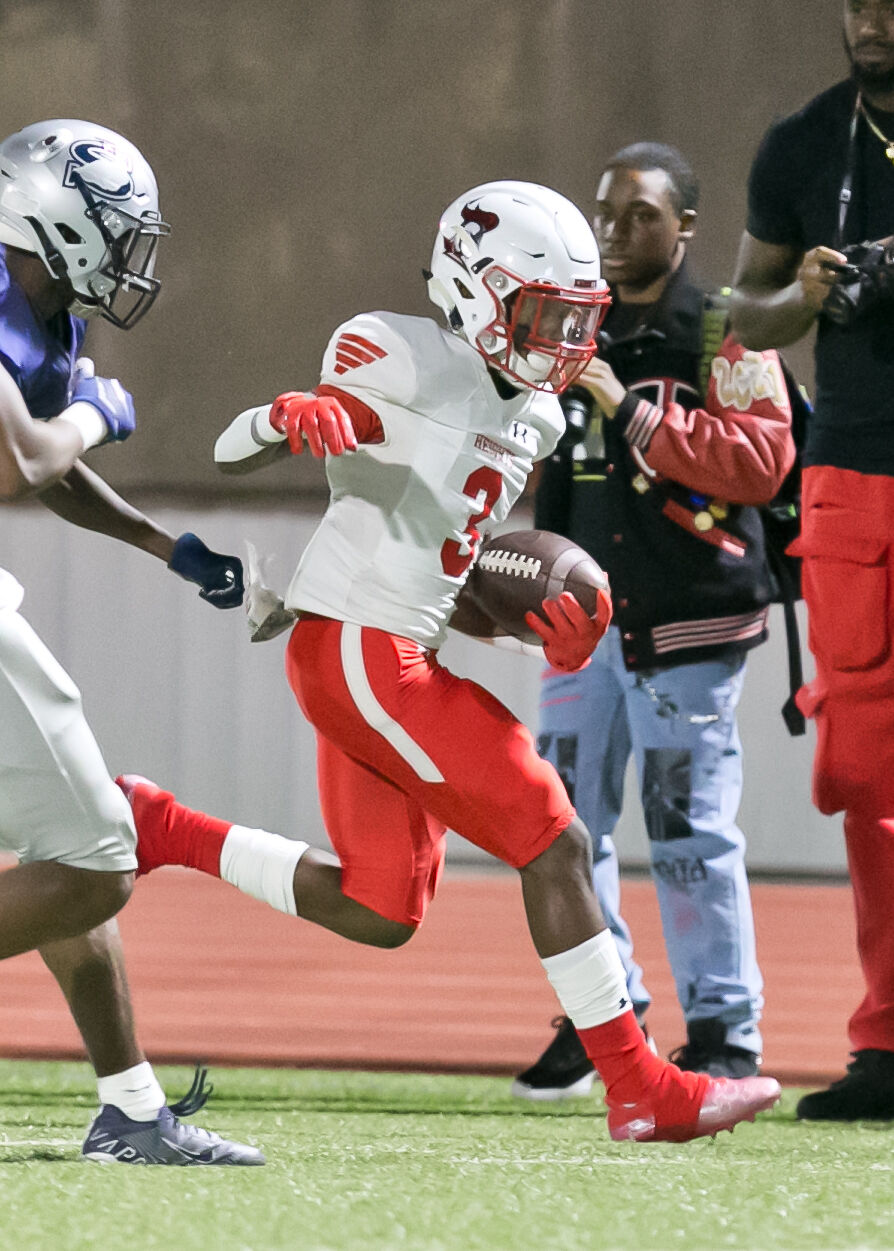 Harker Heights' Marcus Maple (3) runs down the sideline for a touchdown against Shoemaker on Friday at Leo Buckley Stadium.

Shoemaker's Peydon Horace (34) stretches for the goal line for a touchdown against Harker Heights on Friday at Leo Buckley Stadium.

Harker Heights' Re'Shaun Sanford (6) runs out of the backfield against Shoemaker on Friday at Leo Buckley Stadium.

Harker Heights' Marcus Maple (3) runs down the sideline for a touchdown against Shoemaker on Friday at Leo Buckley Stadium.

Harker Heights and Shoemaker took Leo Buckley Stadium patrons on a 3-hour thrill ride Friday that finally ended when Terrance Carter ran in for a two-point conversion in overtime to send the Knights to a 57-56 victory.

The Grey Wolves (3-3, 2-2 District 12-6A) scored 14 points in the final 71 seconds to tie the game at 49. Amazingly, after getting an interception, Shoemaker had enough time to drive for a game-winning 21-yard field goal try on the final play. But the Knights (6-1, 3-1) blocked it and the game went into overtime for the third straight season.

Shoemaker quarterback Omari Evans opened the overtime scoring with a 14-yard run. Antonio Butler tacked on the extra point and the Wolves led for just the second time in the game, 56-49.

On the Knights possession, running back Re’Shaun Sanford got Heights to the Shoemaker 4. On third-and-goal, the 6-3, 240-pound Carter drew a pass interference penalty in the end zone.

With a fresh set of downs at the 2, Carter, the former Knights starting QB,  jumped in behind center and scored standing up.

The decision to go for the win turned out to be easy.

“I asked the kids,” Heights coach Jerry Edwards said. “I said, 'Do you want to kick the PAT or do you want to win it?'

Carter crashed in easily over the left side to end the game.

“They deserved to win the game and so did we,” Shoemaker coach Toby Foreman said. “It’s one of those games where I think we could have played till midnight and it wouldn’t have been that much of a difference.”

The game featured a plethora of stars, and they all delivered.

Sanford broke his own school record with 366 rushing yards. He ran for three TDs and caught a 6-yard scoring pass.

Heights quarterback Dylan Plake, 12-6A’s leading passer, tossed four touchdown passes in the first half. He finished the night 13 of 21 for 163 yards.

Shoemaker quarterback and Penn State pledge Omari Evans ran for 206 yards and four TDs, including an 86-yarder on the Wolves’ first play of the second half. He also completed seven of 10 passes for 125 yards and two TDs.

Khamari Terrell ended the first half with his third kickoff return TD of the season, a 75-yarder. He also recovered an onside kick that led to his game-tying 47-yard touchdown catch with 58 seconds remaining.

Evans hobbled off the field late in the third quarter after a 7-yard run, a big blow for a team that was already without top rusher Jarrod Hicks.

Evans missed five straight plays as backup Kmare’ Balfour led the Wolves to third-and-goal at the Heights 3. Evans finished the drive from there with a TD run.

Early in the fourth quarter, Plake was chased out of the pocket and fumbled. Shoemaker’s Dominick McCarty recovered.

The Wolves drove 37 yards in 13 plays, converting two fourth downs along the way, and took their first lead, 35-34, after Evans’ 1 yard run and Butler’s PAT.

It was the first of five touchdowns in the final 4:43.

Sanford put Heights back in front 42-35 with an 11-yard run and two-point conversion. The Knights then surprised Shoemaker with a quick onside kick and Sanford scored again on the next play, from the Shoemaker 45.

The Knights appeared to be on their way to a three-touchdown lead at halftime when they scored with eight seconds remaining after stopping Evans inches short of the goal line on fourth-and-goal from the 3.

Heights drove 99 yards in less than 3 minutes and scored on a 6-yard pass from Plake to Sanford.

The stunning turnaround gave the Knights a 27-7 lead.

But Terrell returned the ensuing pooched kickoff 75 yards for a touchdown on the final play of the half.

Both offenses benefited from short fields all night as neither team was interested in kicking deep.

Plake tossed TD passes of 21 and 11 yards to Maple, and a 33-yard strike to Eric Jackson. Sanford had 127 yards on 15 carries in the opening half, including a 20-yard run from the goal line that shifted the Knights to attack mode following the goal-line stand.

Heights scored on their first drive after Shoemaker muffed the opening pooched kickoff at its 33. Jared Black recovered for the Knights.

The Wolves answered, tying the game at 7 on Peydon Horace’s 11-yard run.

Maple caught another TD pass on the Knights’ next drive. The Knights missed on the two-point conversion but led for the rest of the half.

Friday was Shoemaker’s first true home game that was completed at Buckley Stadium. The Wolves’ first one was canceled before the season started. The Sept. 10 game against Kerrville Tivy was moved to Kerrville after a water main broke at Buckley. Shoemaker’s Thursday night, Sept. 30, game against Copperas Cove was postponed by lightning after a couple of minutes of game action. It was completed the next night in Cove.

Ellison routs Cove 55-7, controls own fate in 12-6A playoff race