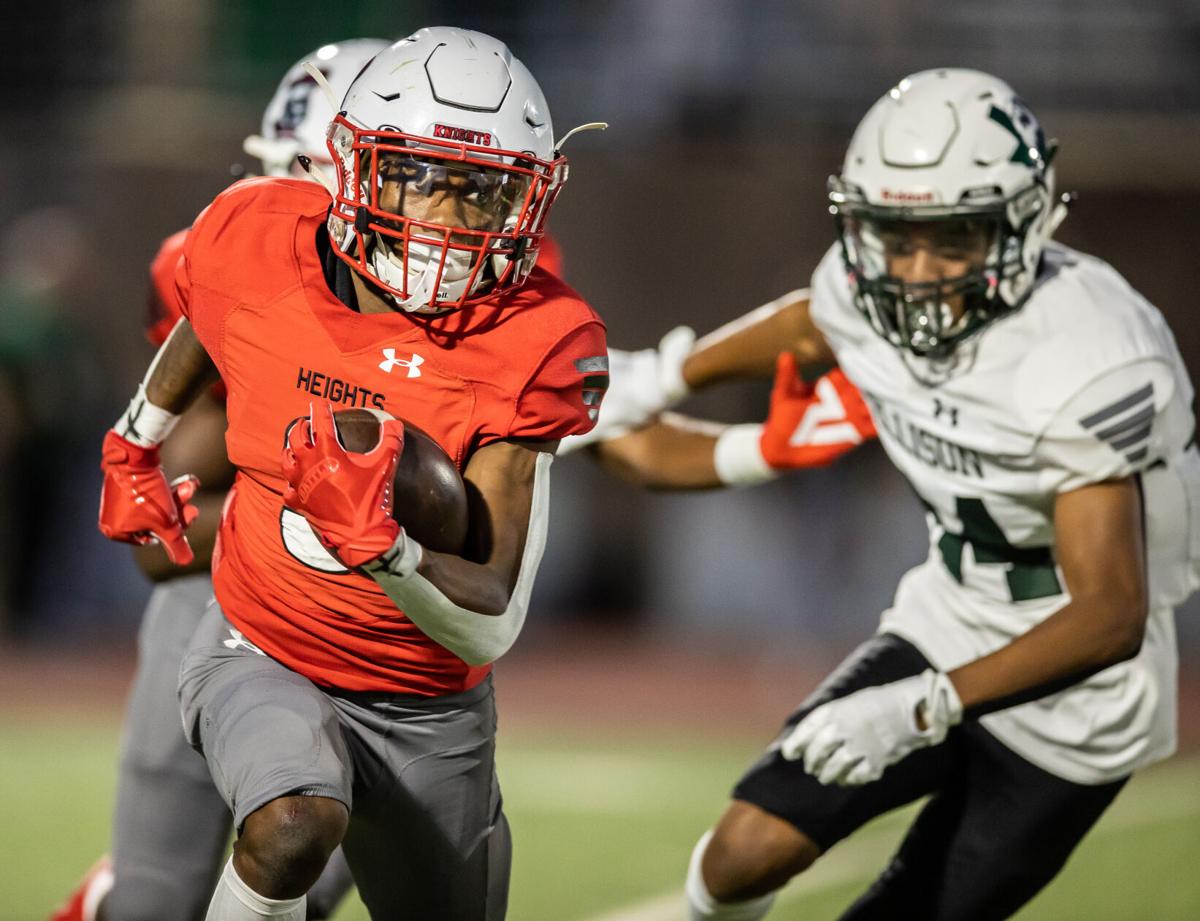 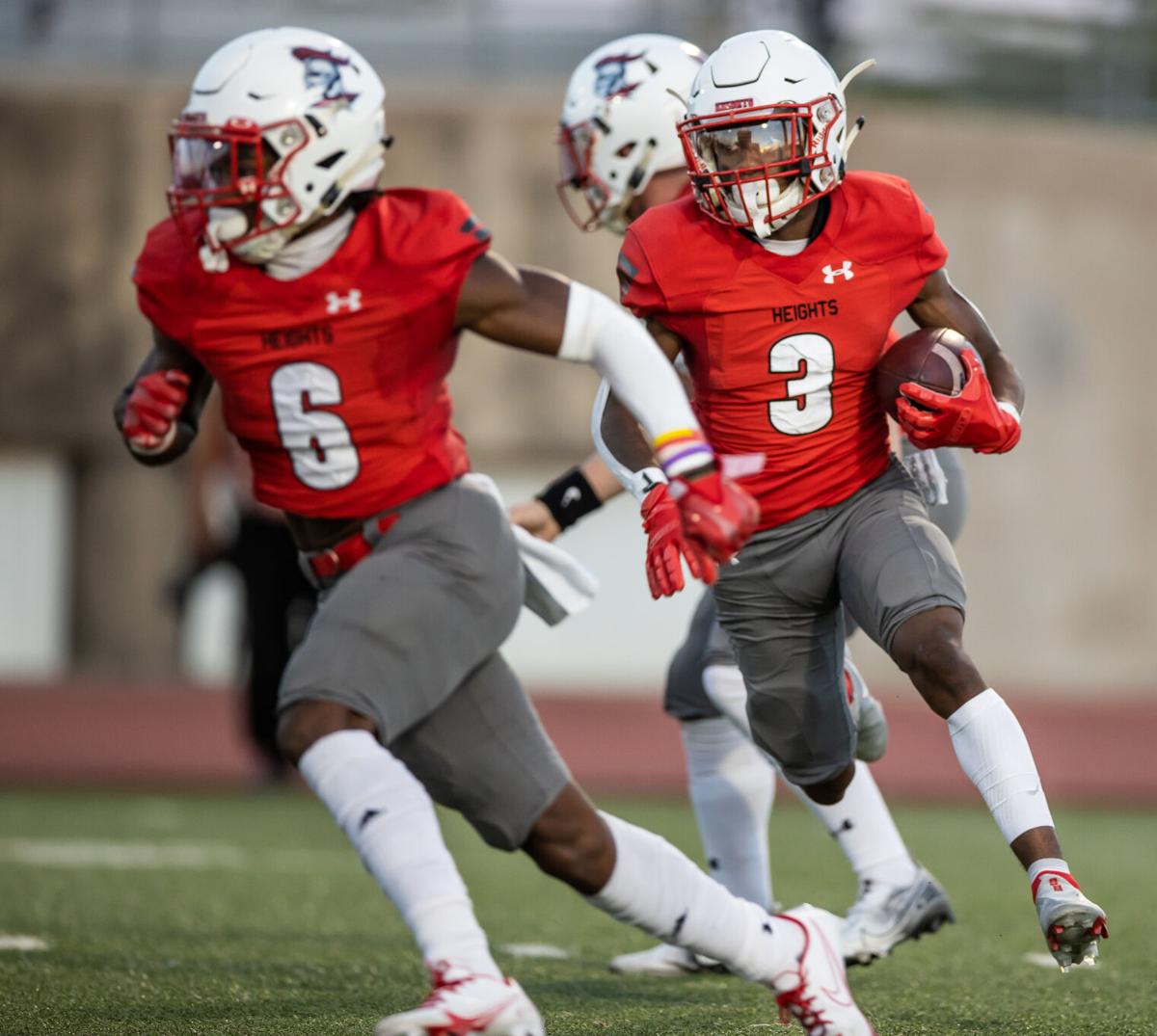 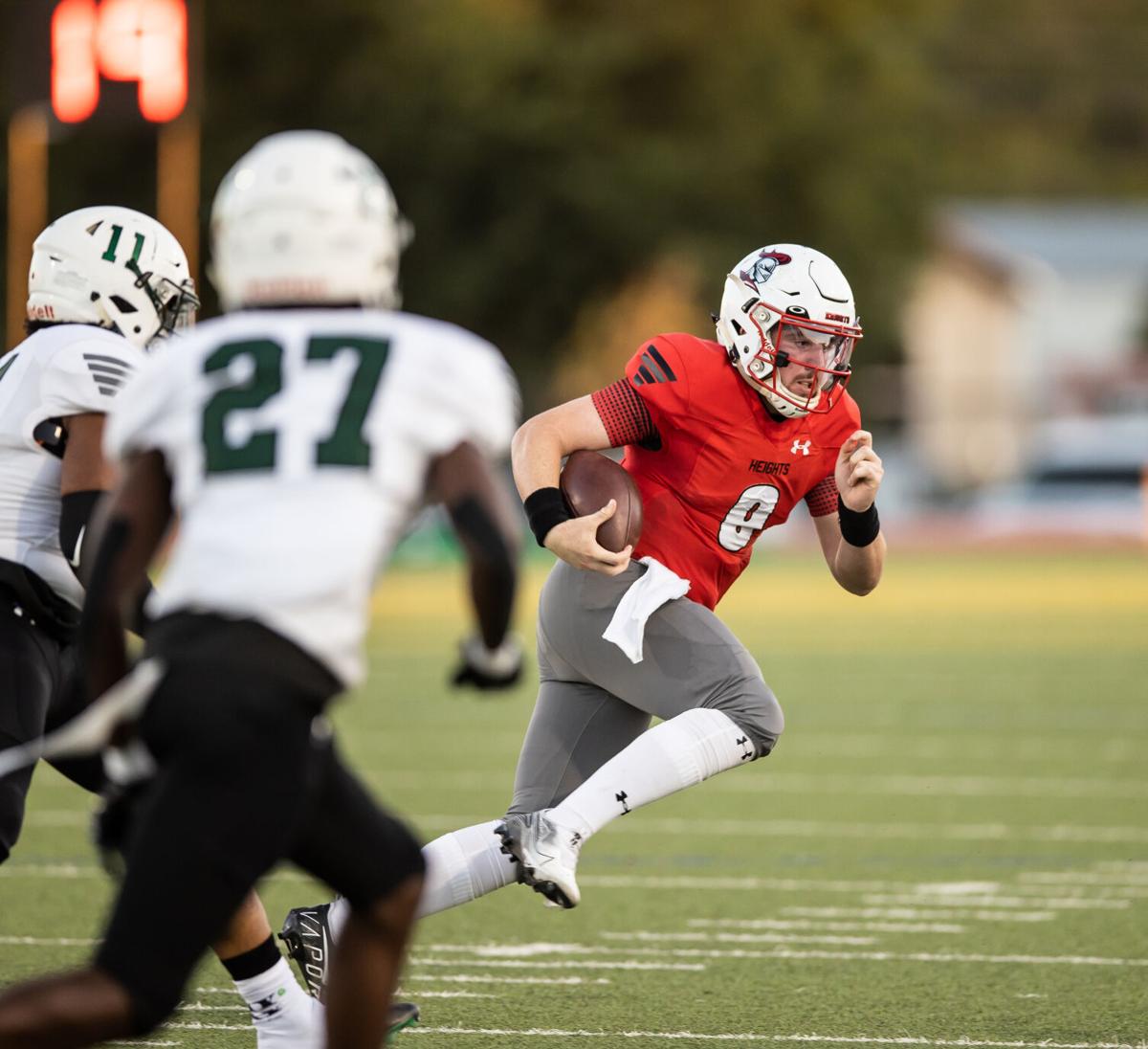 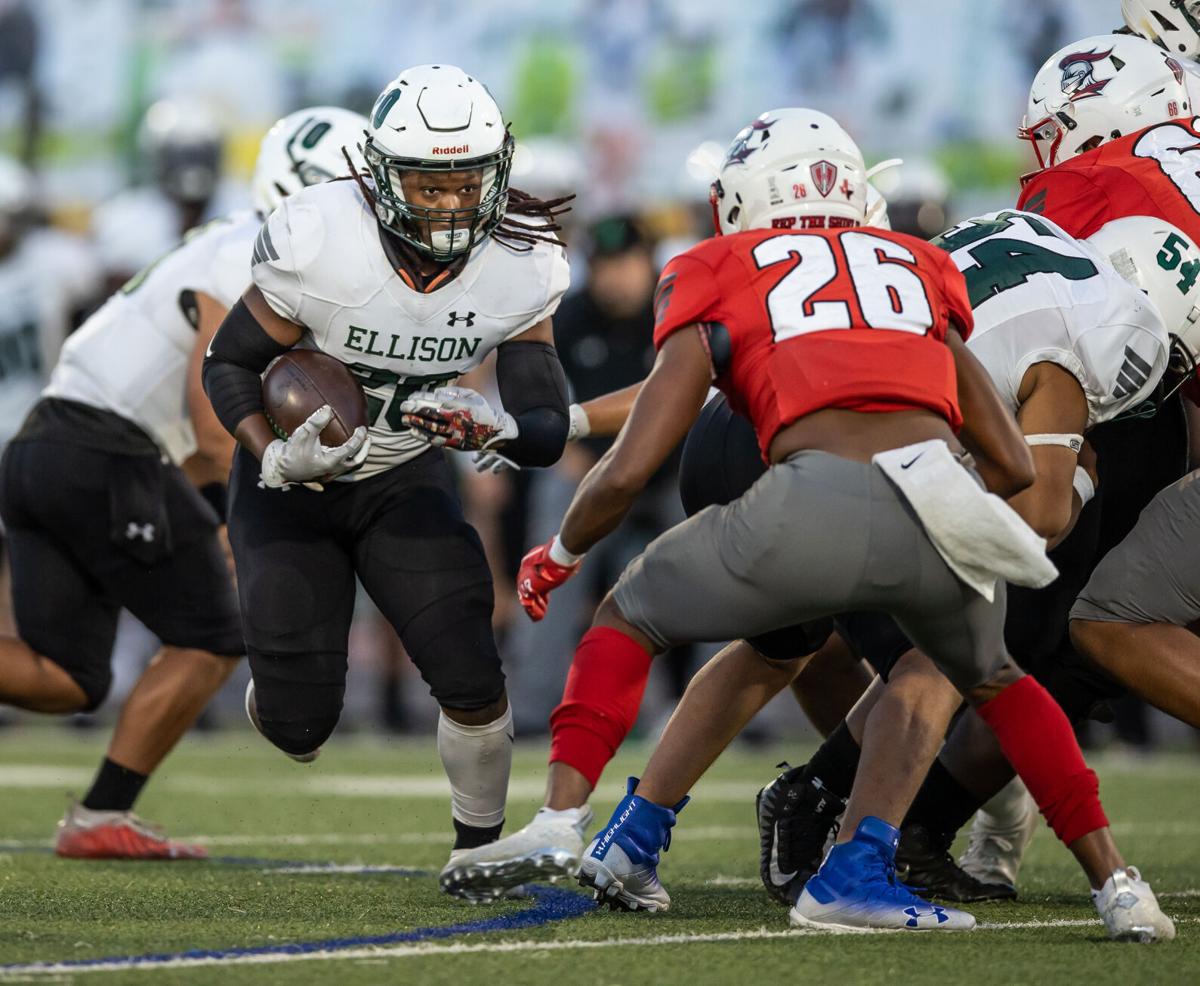 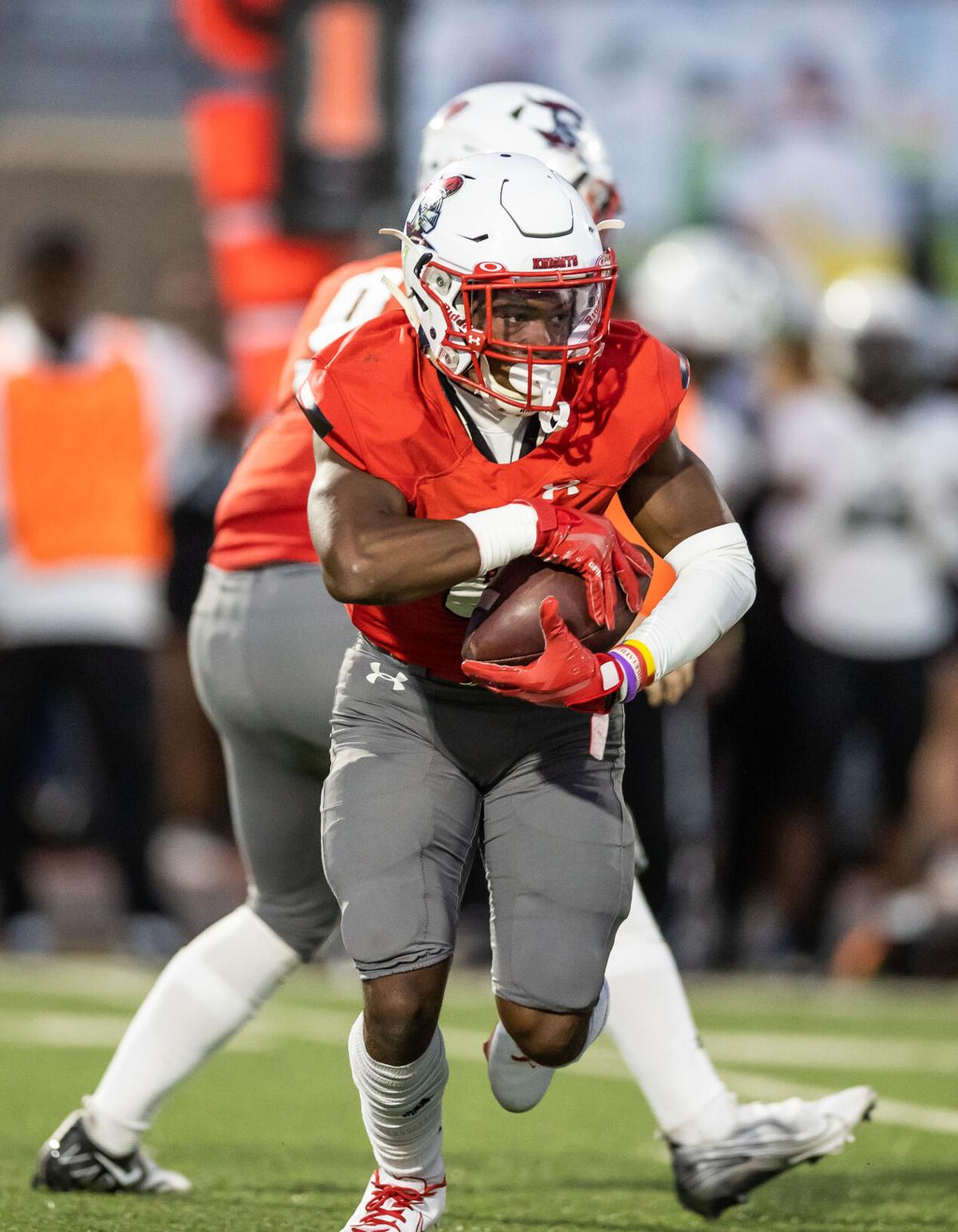 Harker Heights' Re'Shaun Sanford (6) runs from the backfield after taking a handoff against Ellison at Leo Buckley Stadium on Thursday, Sept. 23, 2021. 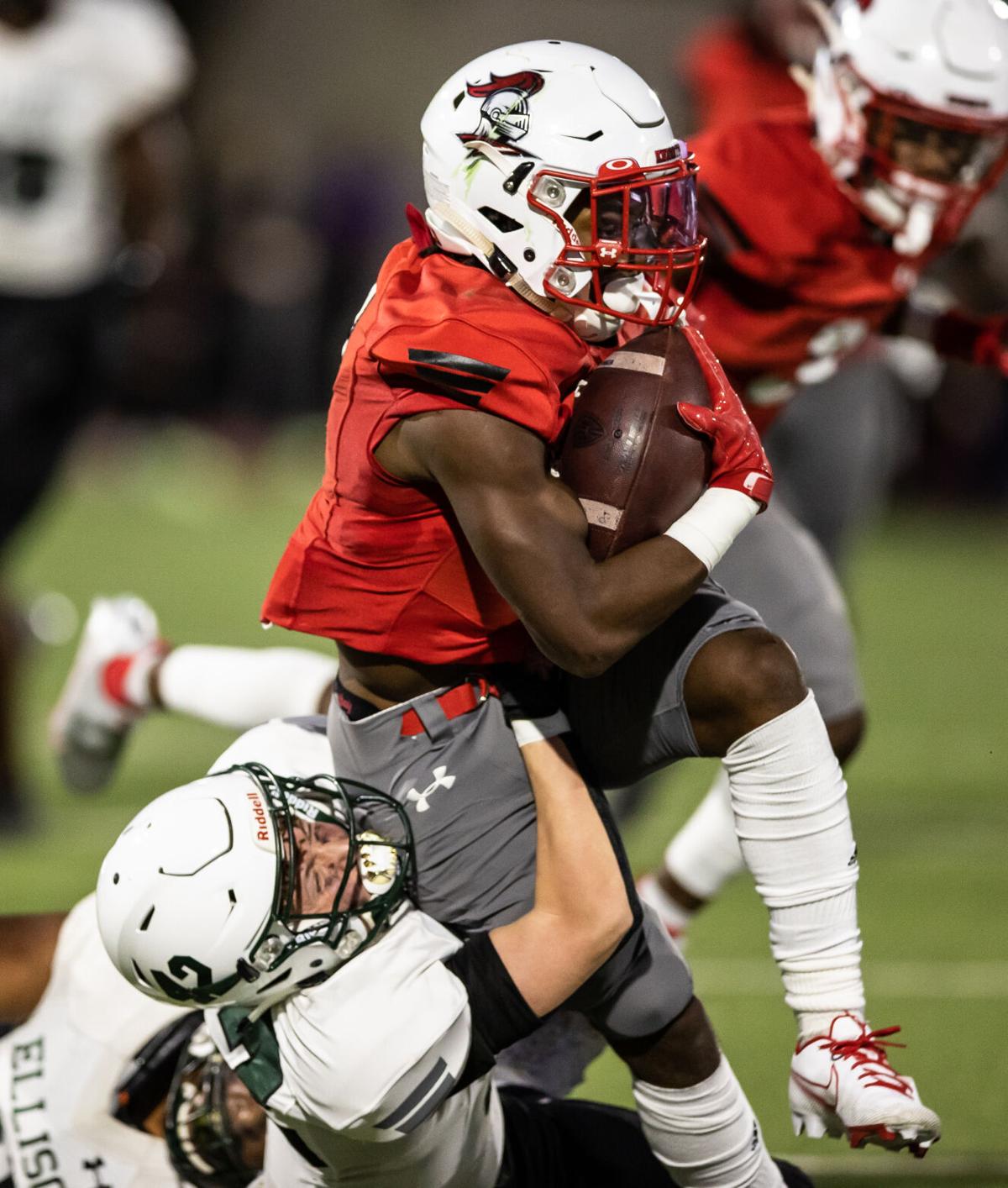 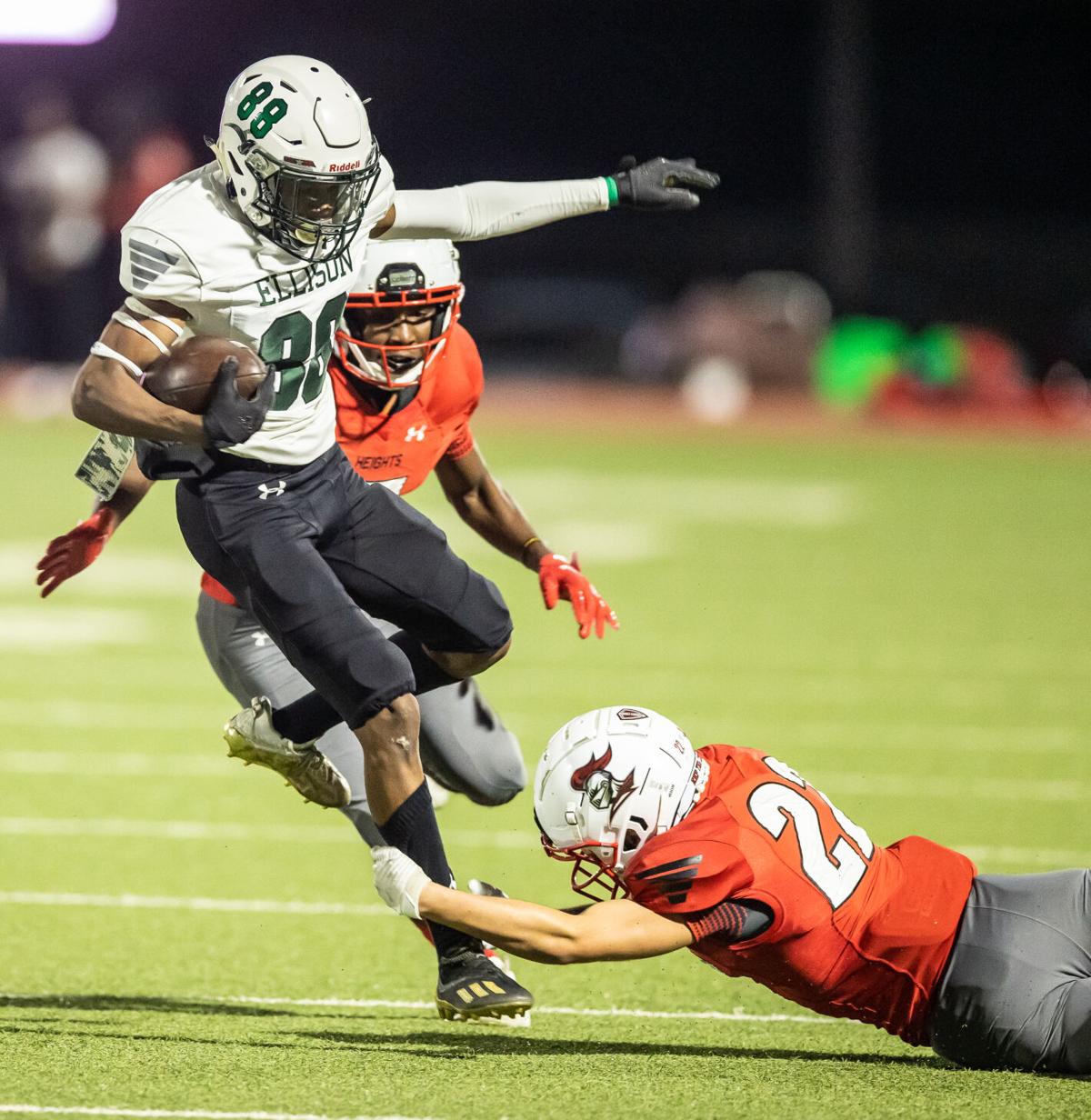 Ellison’s Bobby Williams is tripped up by Harker Heights' Raymond Barrett (22) after getting a first down at Leo Buckley Stadium on Thursday, Sept. 23, 2021. 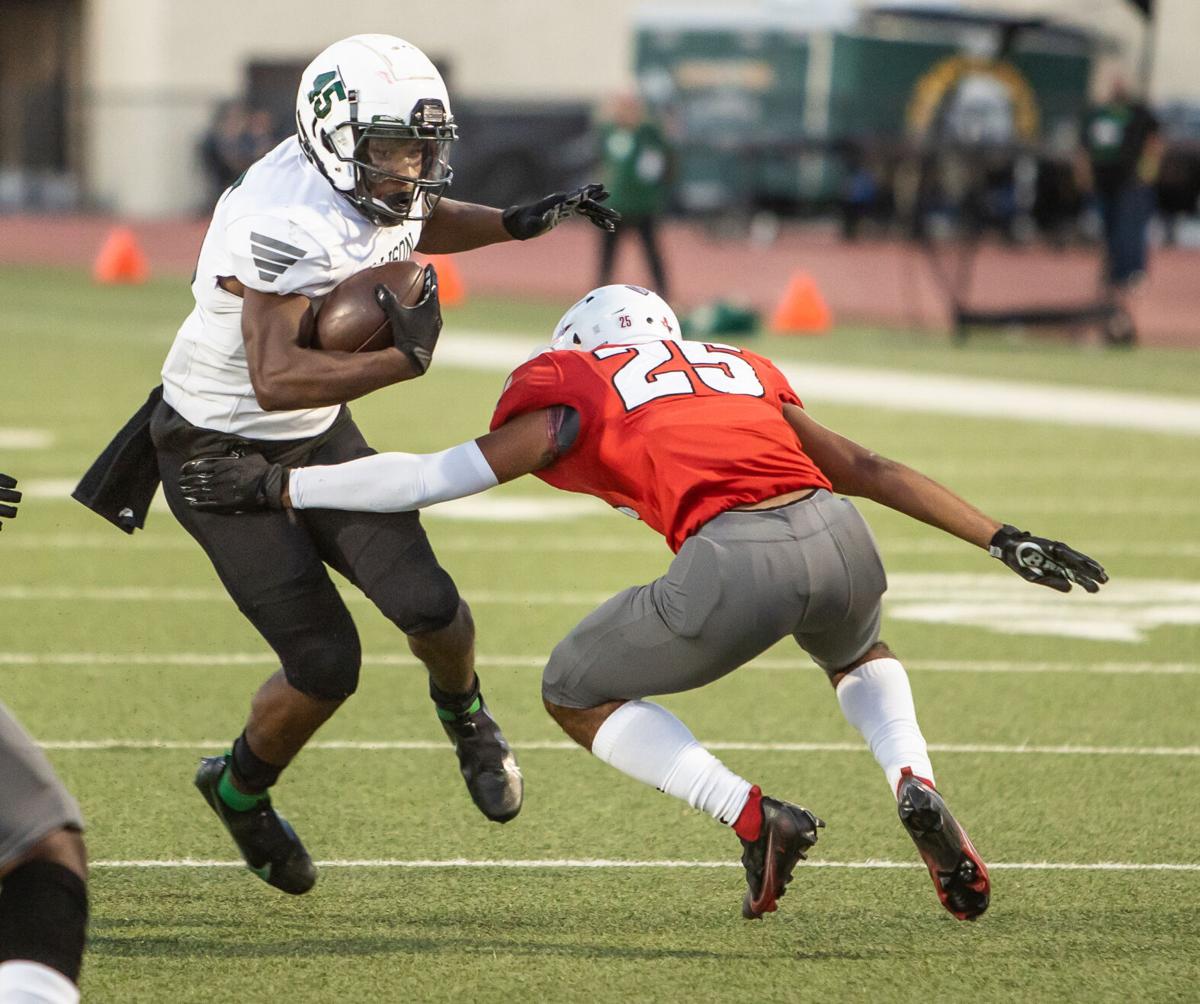 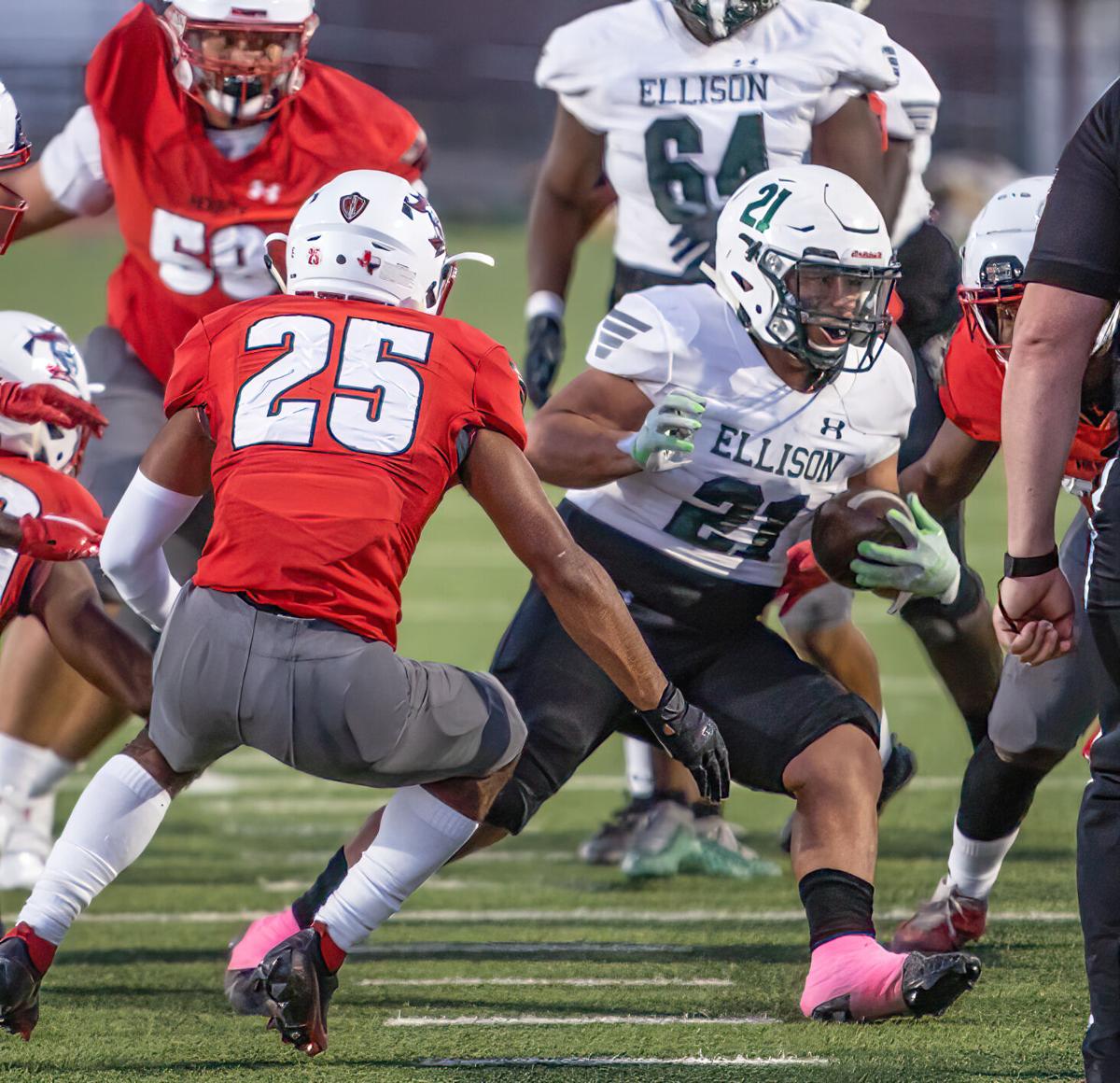 Harker Heights' Re'Shaun Sanford (6) runs from the backfield after taking a handoff against Ellison at Leo Buckley Stadium on Thursday, Sept. 23, 2021.

Ellison’s Bobby Williams is tripped up by Harker Heights' Raymond Barrett (22) after getting a first down at Leo Buckley Stadium on Thursday, Sept. 23, 2021.

Everything followed the trends.

The District 12-6A schedule opened Thursday evening with Harker Heights hosting Ellison, and both teams did exactly what was expected.

The high-octane Knights topped the 40-point plateau again behind another impressive outing from junior running back Re’Shaun Sanford, and the Eagles struggled to score in a 49-8 contest.

Sanford posted his ninth touchdown of the season during a 22-carry, 196-yard showing, while also adding 61 yards on two catches as Harker Heights scored the final 35 points of the game.

Playing at home for the first time, Harker Heights took immediate control of the contest, forcing a turnover on downs to end the game’s opening drive before needing just six plays to cover 33 yards and reach the end zone. Terrance Carter, a senior, punched in the 1-yard score to give the Knights a 7-0 lead.

After exchanging punts, the Eagles opened their third drive at the Harker Heights 45-yard line, advancing inside the 10-yard line before missing a 26-yard field goal off the right upright.

The Knights capitalized on the mistake early in the second quarter as sophomore Dylan Plake found Christopher Robinson for a 6-yard touchdown, increasing their cushion to 14-0 with 7:04 remaining in the half.

Ellison finally got on the scoreboard with less than three minutes remaining in the second quarter thanks to Kason Sims’ 69-yard scoring pass to junior Dantrell Sterling, trimming the deficit to six points following a successful two-point conversion run from Bobby Williams. Sterling had four catches for 102 yards in the half.

The gap quickly widened, though.

Harker Heights needed just six plays to return to the end zone as Aimeer Washington punctuated the 78-yard drive with a 7-yard run across the goal line, and the Knights carried the 21-8 cushion into the locker room.

Following the break, Harker Heights (4-0, 1-0) scored on its first two possessions – a 26-yard pass from Plake to Marcus Maple and a 65-yard run from Sanford – before scoring two more times late in the game.

The outcome gives the Knights their best start under Edwards, who took over the program in 2013, and extends an impressive offensive showing.

Harker Heights has tallied at least 40 points in every game, including a pair of 60-point outbursts, and is averaging 505.8 yards through four games. Should the Knights continue the pace, they would easily eclipse the team records for most points (427, 2002) and most total yards (4,551, 2002) in a season, which were each set during a 13-game campaign.

Additionally, Sanford, who has already amassed 720 yards and seven touchdowns on the ground, is poised to potentially put together the program’s best rushing season of all-time. Currently, Nick Sessions owns the single-season rushing record with 1,666 yards in 2002, and he owns part of the single-season rushing touchdowns record with 16, sharing the accomplishment with Dominique Ziegler (2002) and Donnie Shorts (2004).

And the Knights will look to further improve the statistics next week against one of the district’s most porous defenses.

Temple (1-2) entered the week ranked next to last in total yards allowed among the eight-team field, giving up 454.7 yards per game heading into tonight’s contest at Bryan (0-3).

The Eagles, who have been held below 14 points in every game this season, will look to rebound versus Killeen next week. The Kangaroos (2-1) play Shoemaker (1-1) tonight.