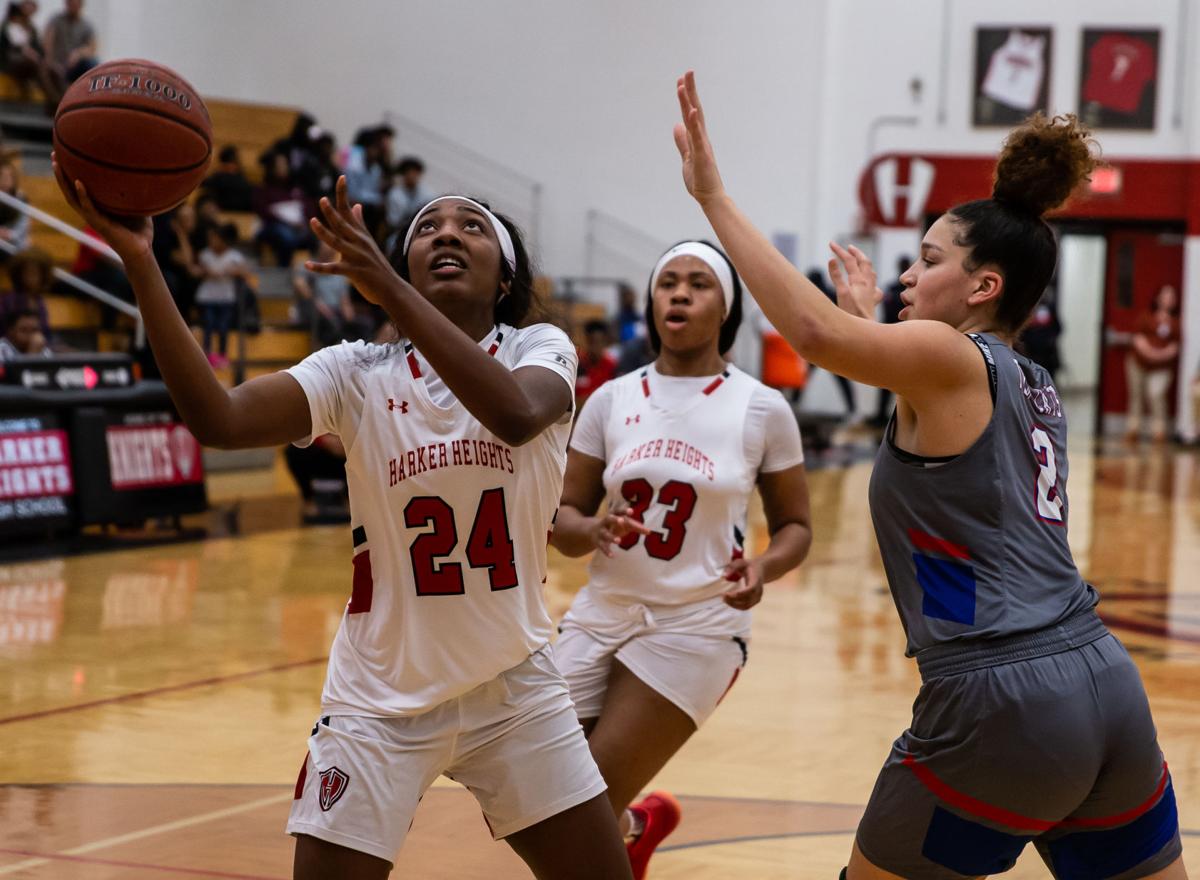 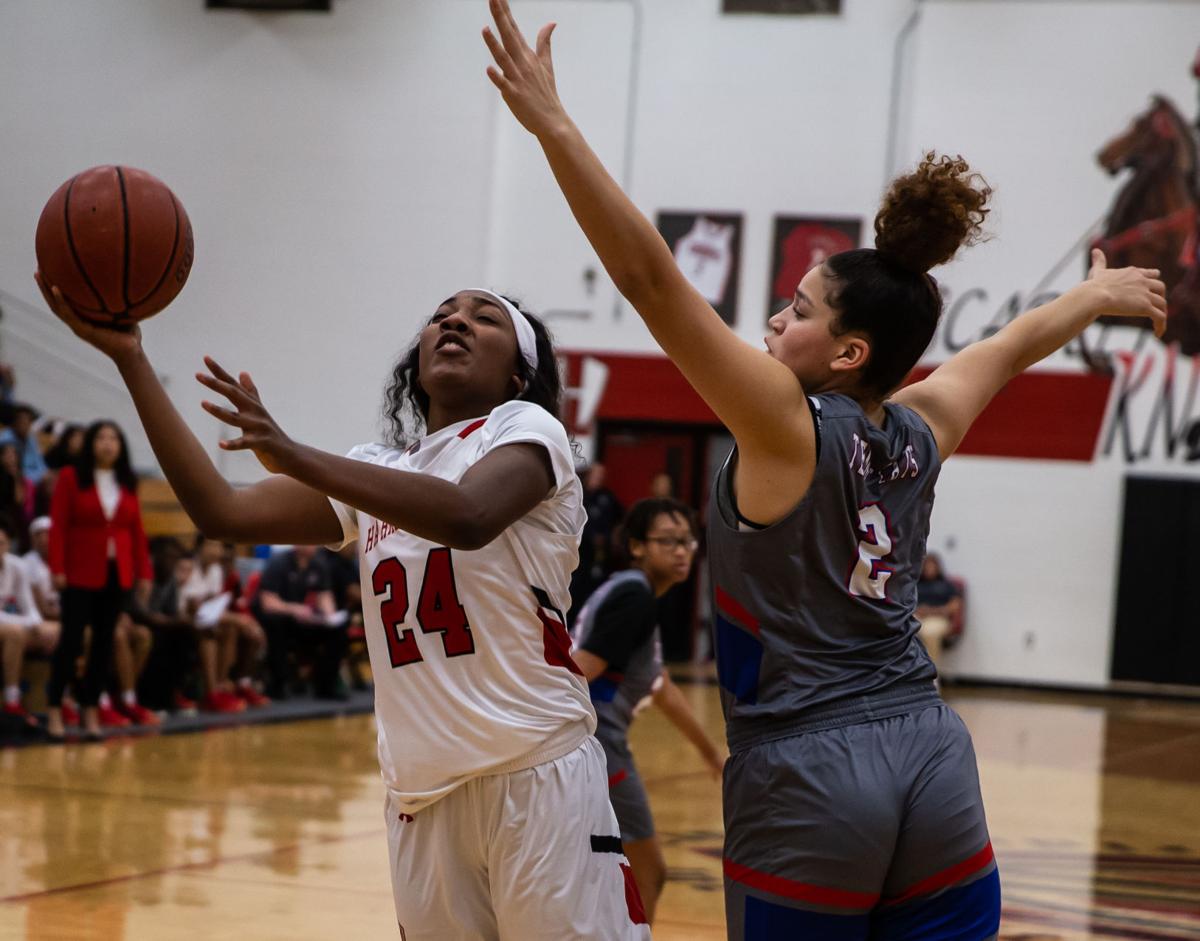 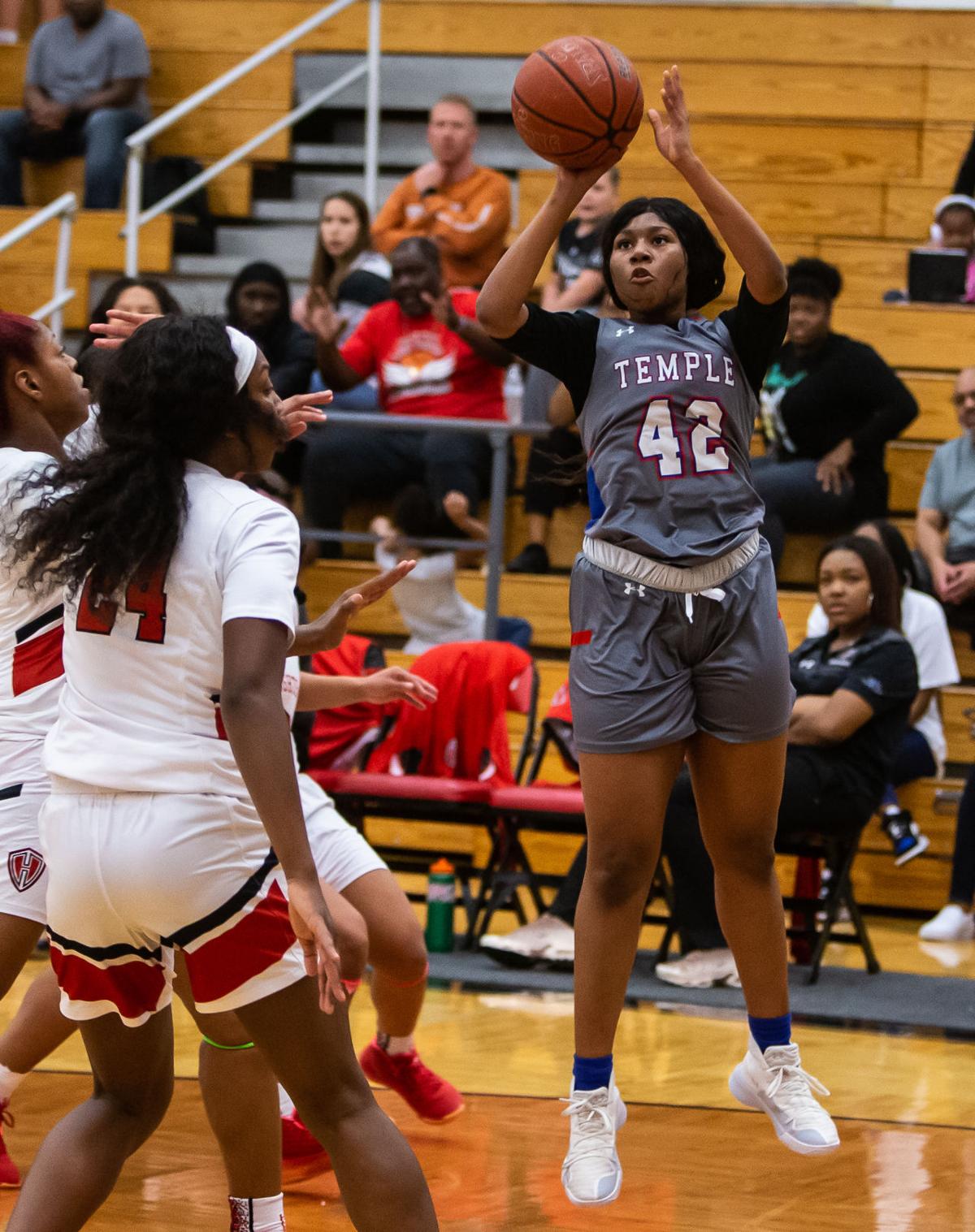 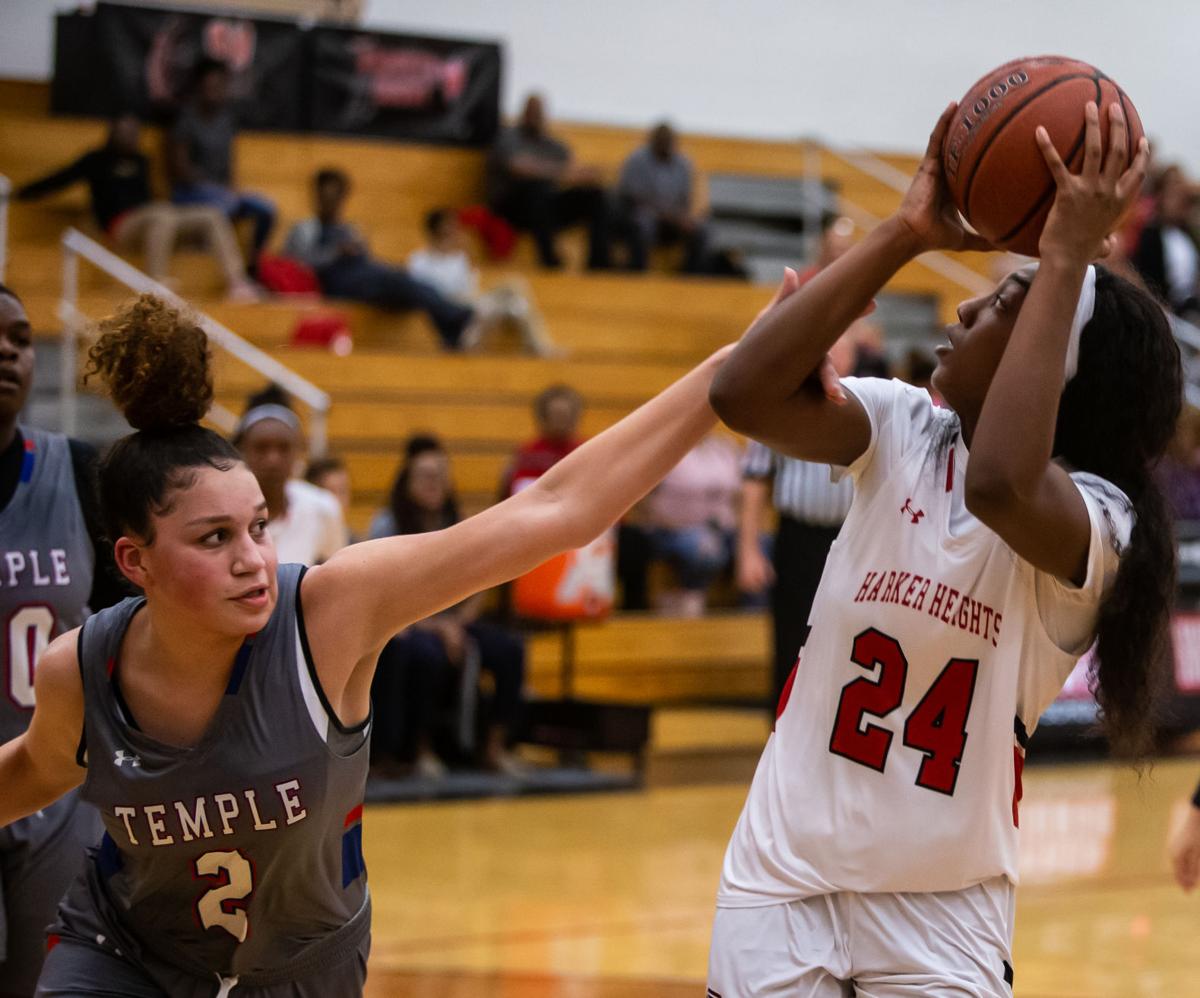 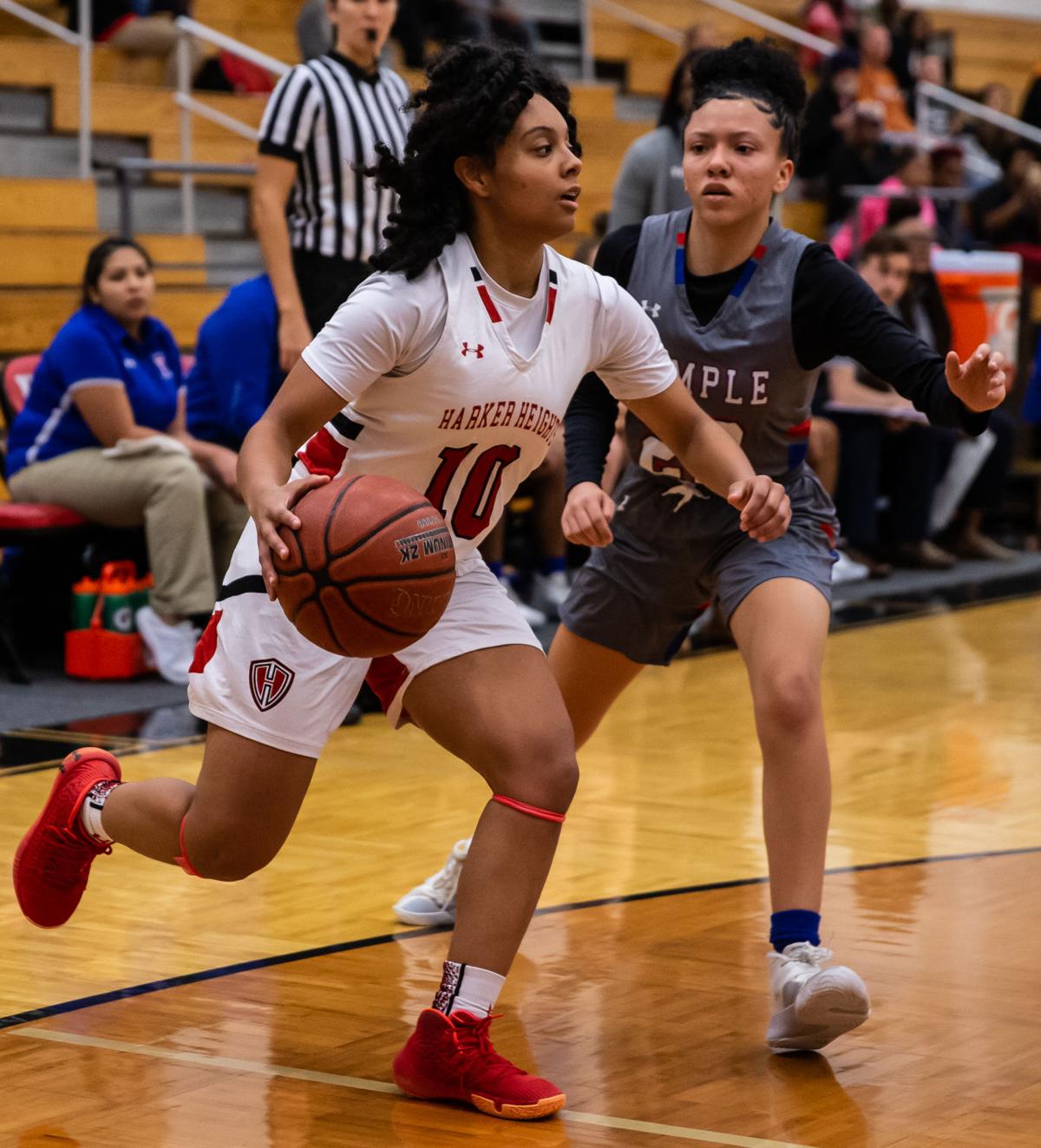 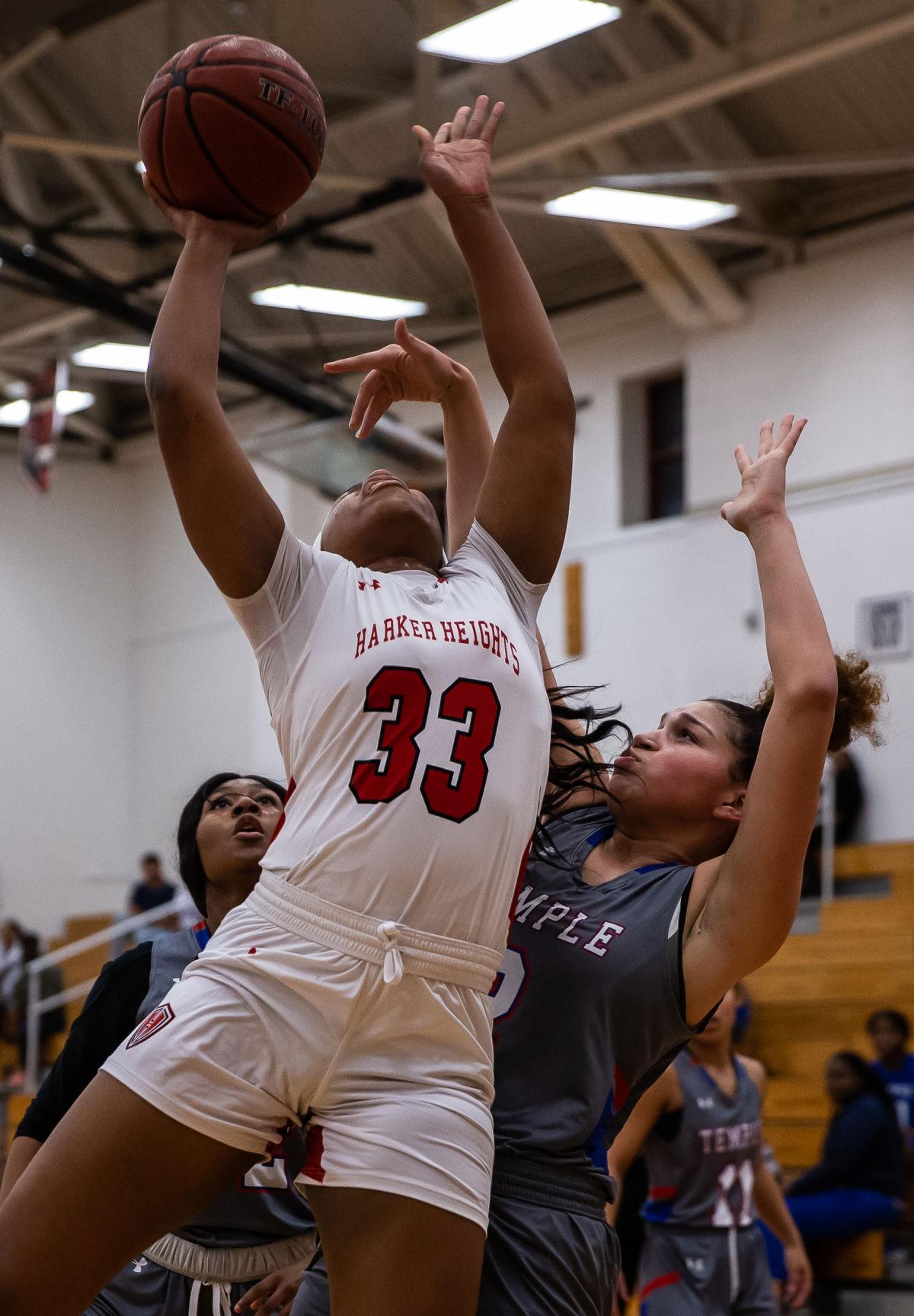 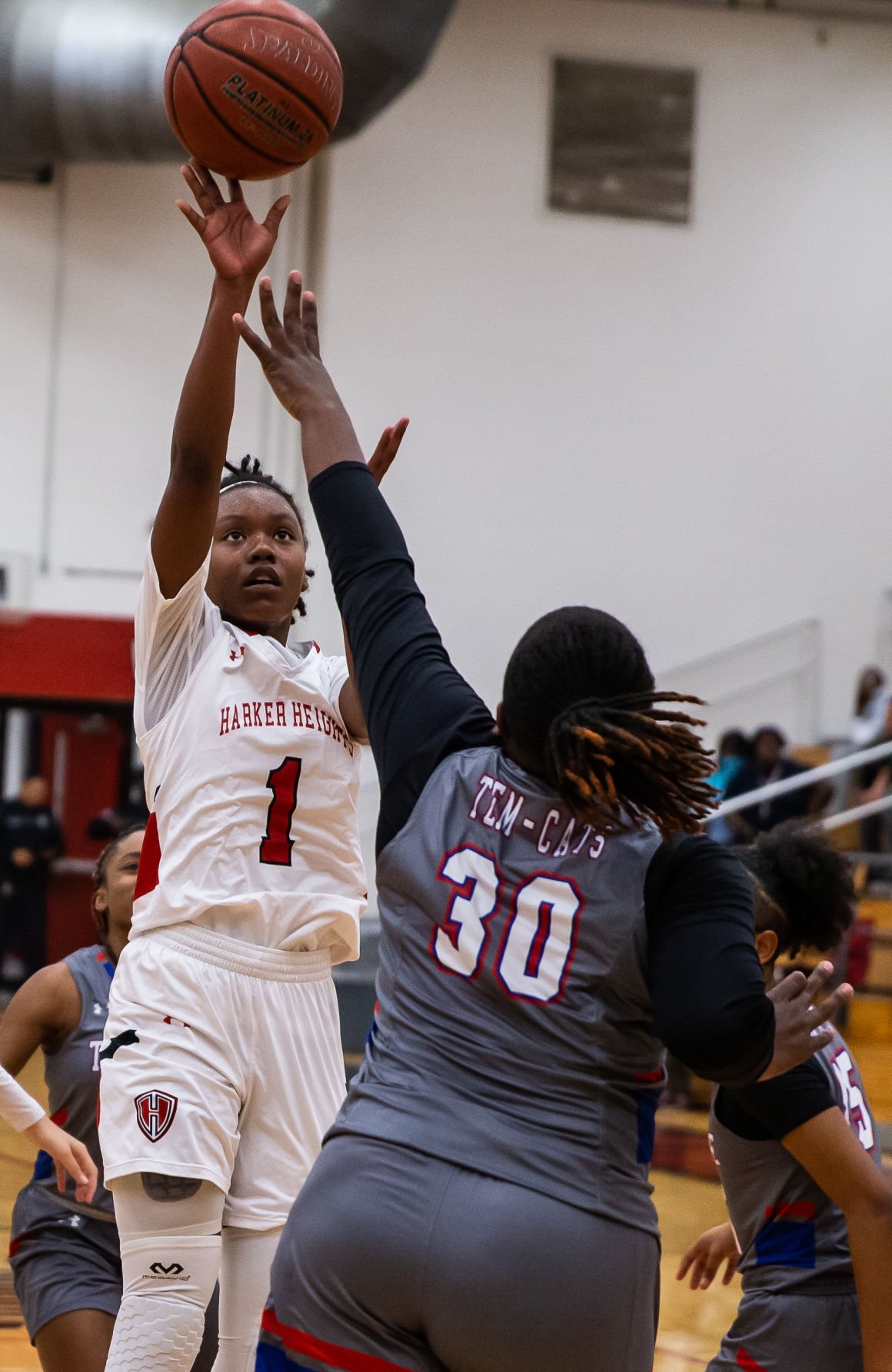 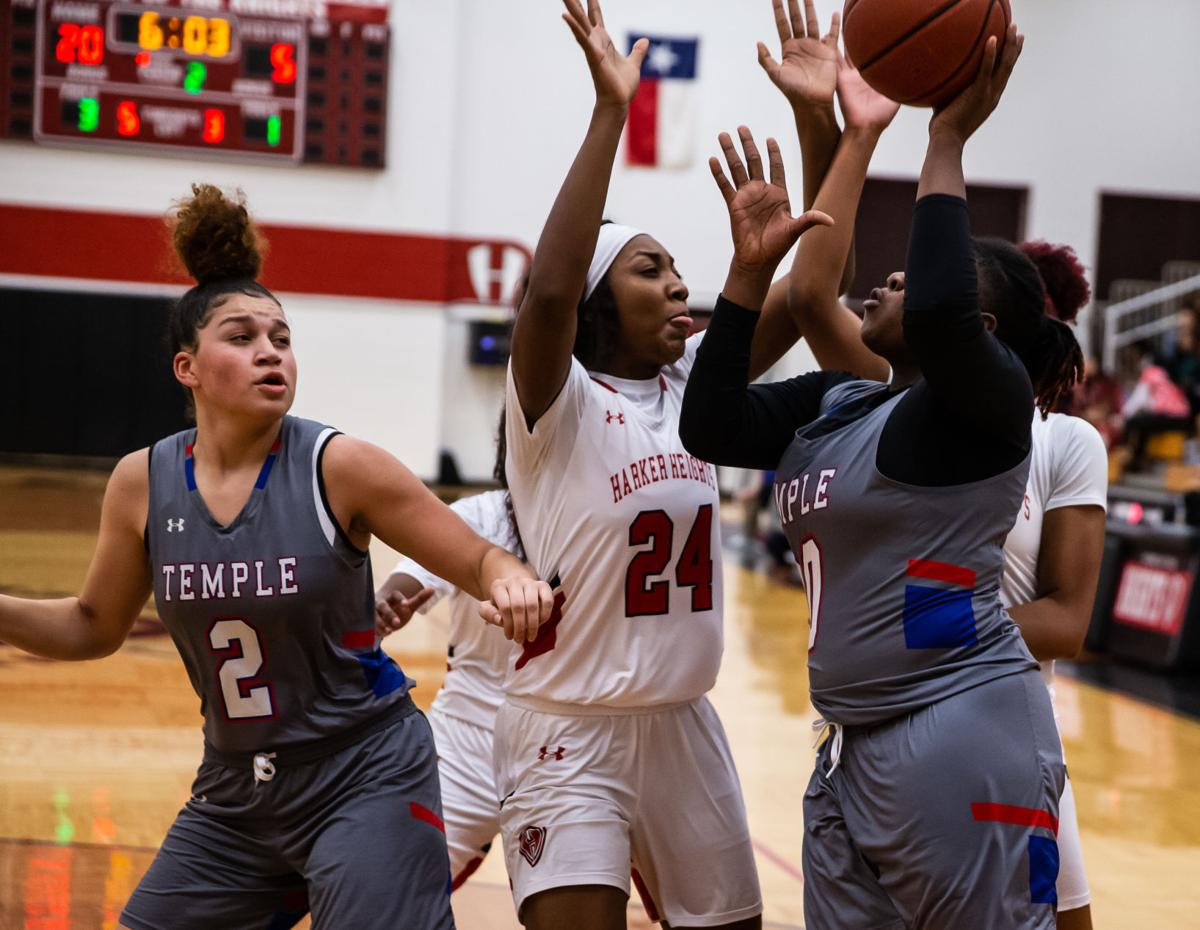 Temple's Wilashia Burleson (30) shoots in a crowd as Aniah Hall (2) waits for a rebound Tuesday at Harker Heights. 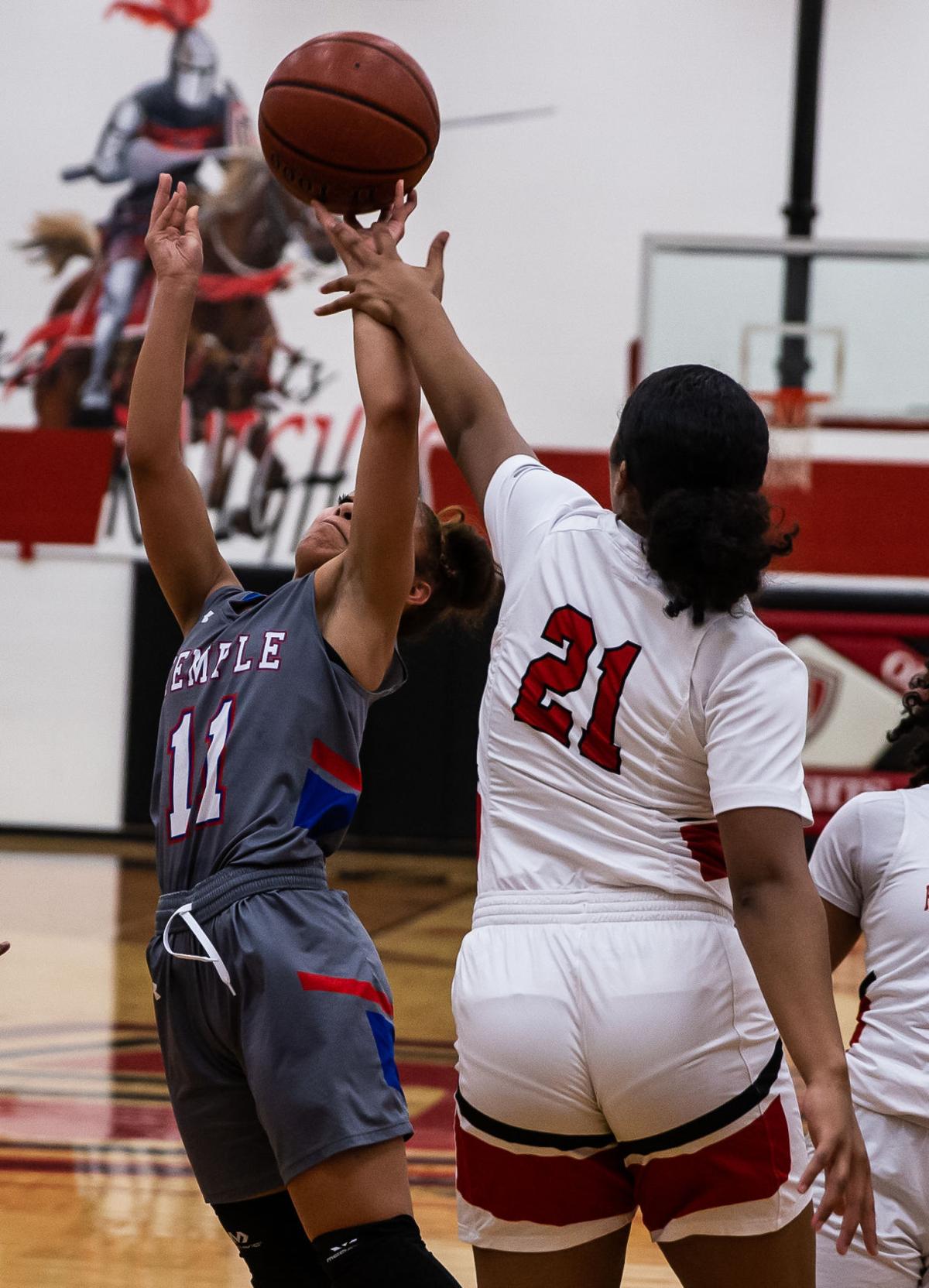 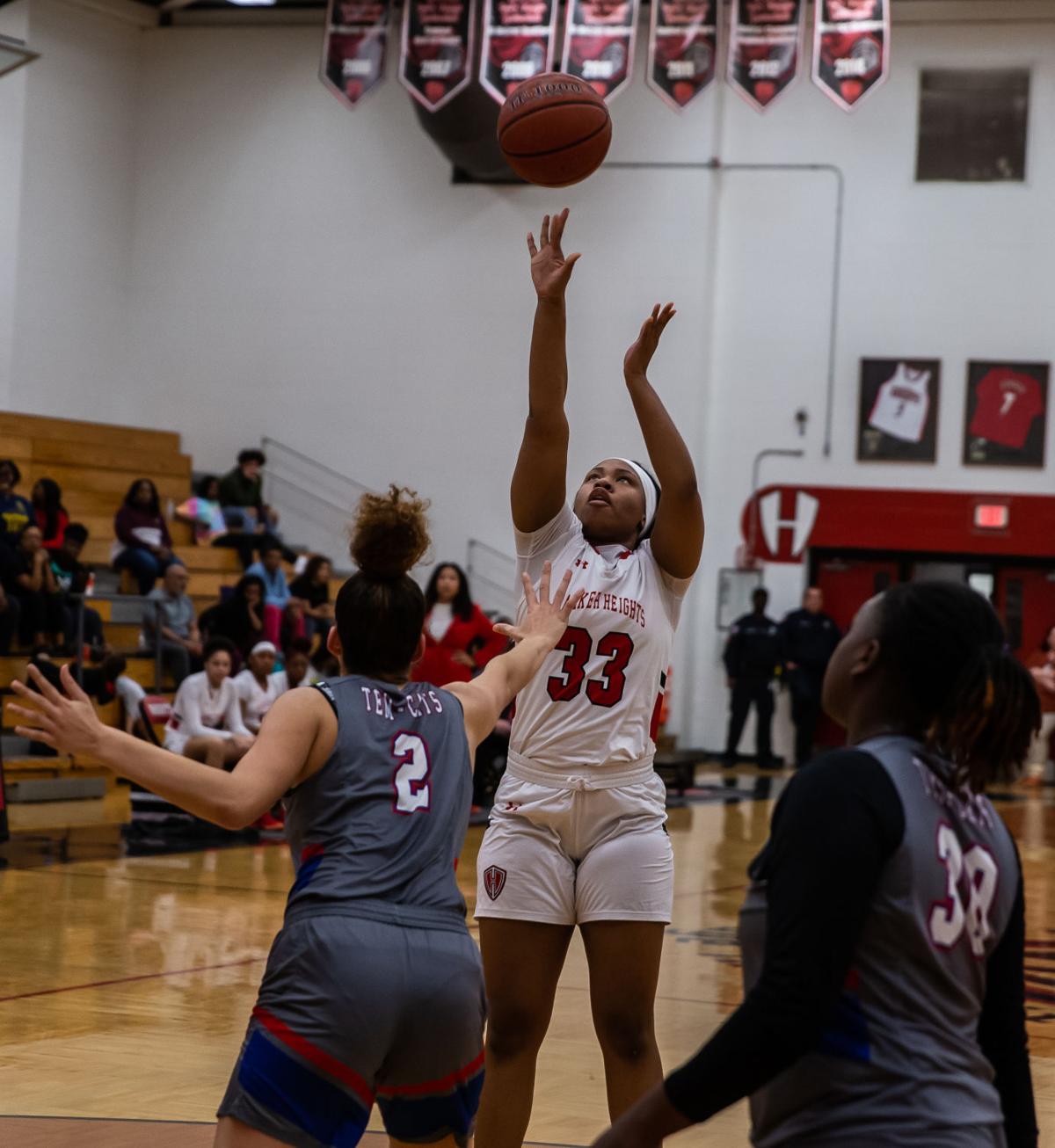 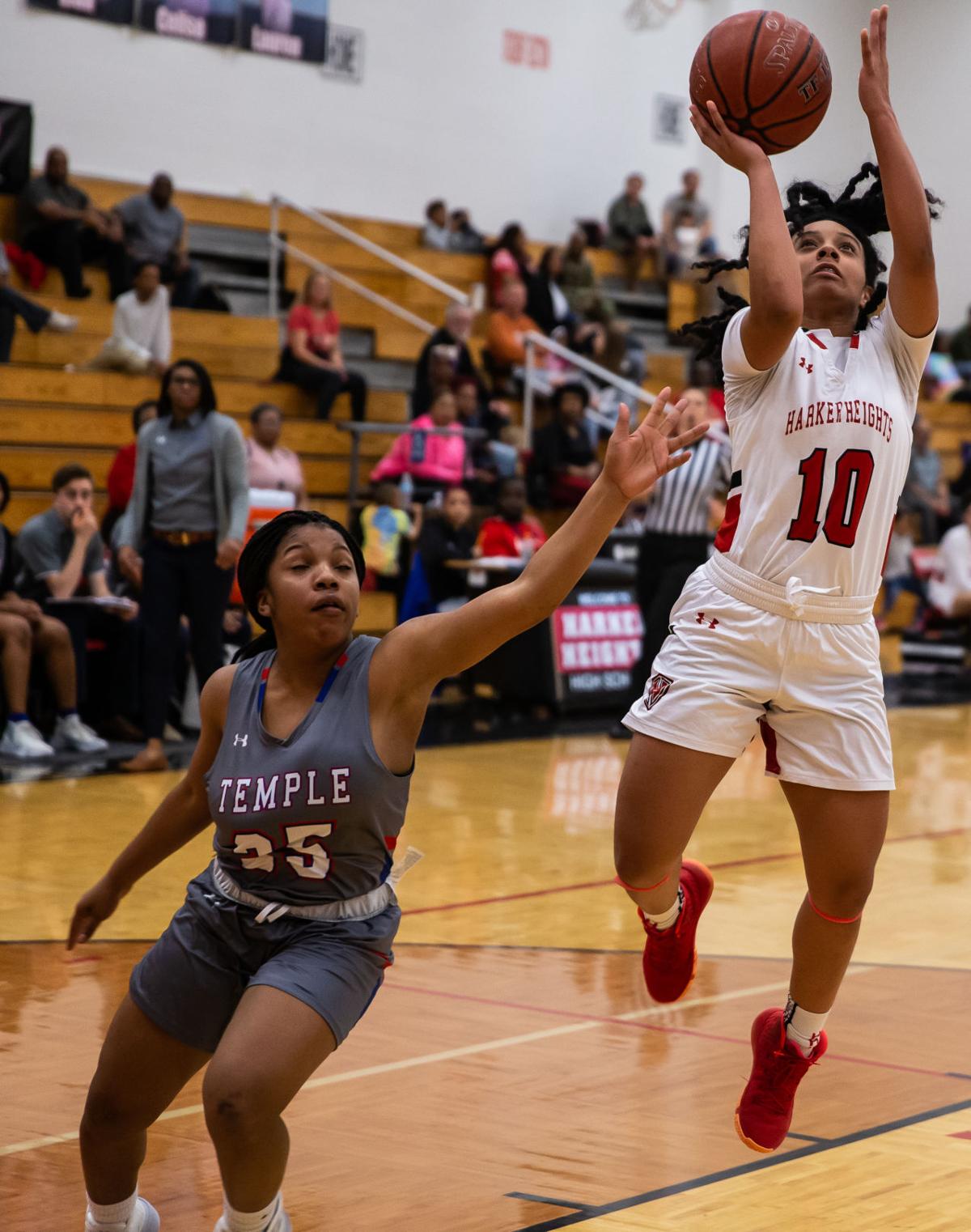 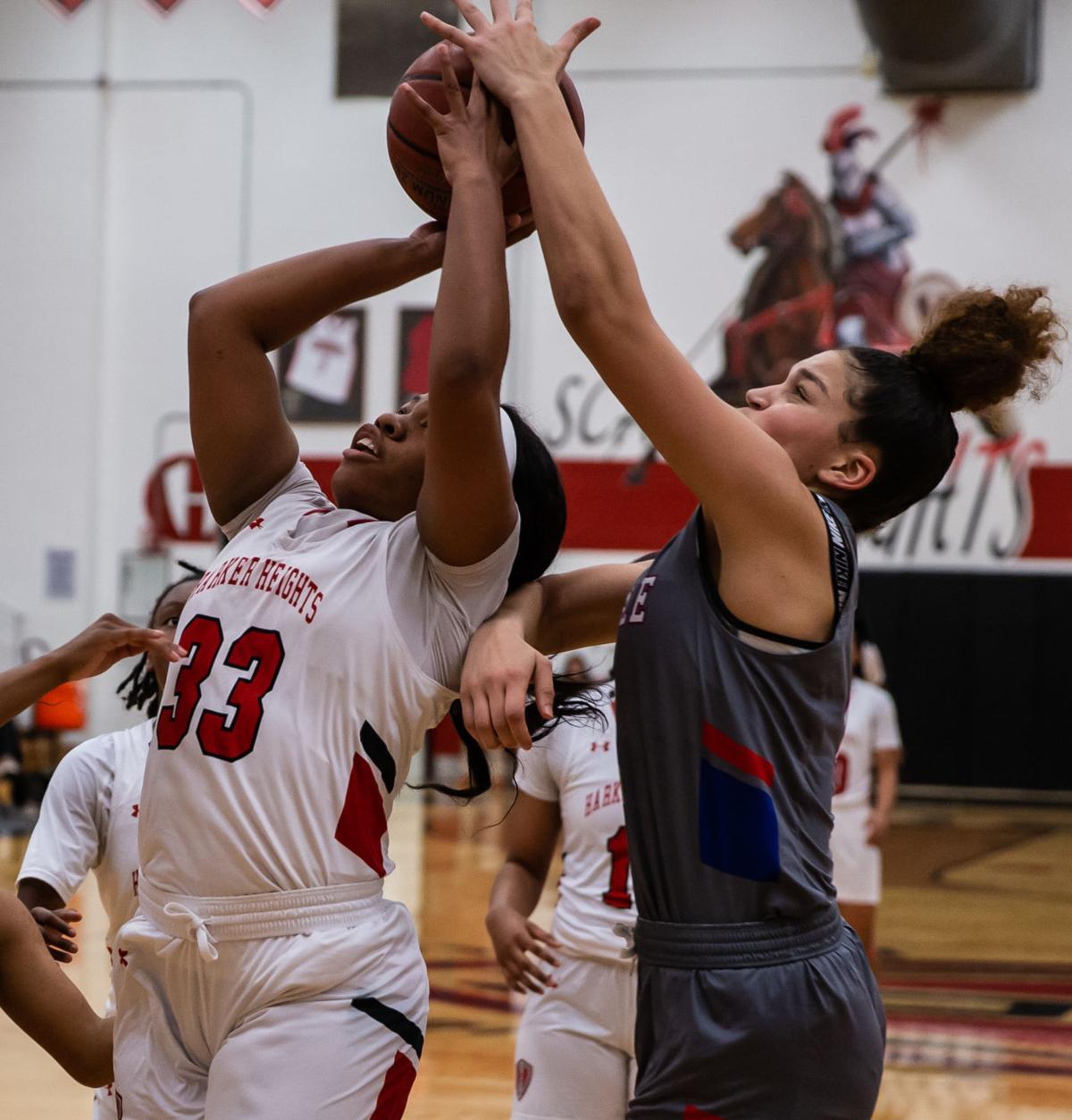 Temple's Wilashia Burleson (30) shoots in a crowd as Aniah Hall (2) waits for a rebound Tuesday at Harker Heights.

HARKER HEIGHTS — It was practically a perfect period.

Hosting Temple on Tuesday to open the second round of District 12-6A competition, No. 18 Harker Heights started with a stellar showing. The Lady Knights scored the first 18 points of the contest and held the Tem-Cats scoreless until moments before the buzzer ending the period.

The immediate onslaught was simply too overwhelming, and Temple never recovered as Harker Heights cruised to a 62-45 victory.

While the strong start propelled the Lady Knights to a win, Harker Heights head coach Shirretha Nelson was equally concerned with how her team finished.

“Our game plan worked really well for us early,” she said. “We were very poised, but then, we started to have breakdowns and tried to make stuff happen instead of letting it happen.

“But that is hard to avoid when you get up big like that, because you have to make substitutions and adjustments.”

The Tem-Cats were outscored by just two points during the duration of the contest, but the damage was already done.

Junior guard Sierra Brooks connected on a 3-pointer for the first basket of the game, and the Lady Knights continued to roll offensively, making 8 of 11 field-goal attempts in the period.

Angelique Morgan, Brielle Dorsey and Celise Bobbitt each followed with layups before Bobbitt’s baseline drive and Brooks’ second 3-pointer created a 14-0 cushion. Then, Morgan and Bobbitt contributed a basket apiece to complete the 18-0 run.

“That’s what we want to see more of during the rest of district,” Bobbitt said. “That’s how we need to play.

“Everything is starting to come together, and now, we just need to perfect things.”

Choice Roberts, a senior, ended a streak of 11 missed attempts from the floor for Temple (17-11, 4-5) to start the game by connecting on a 3-pointer with three seconds remaining in the first quarter.

It was too late, though.

The Lady Knights’ advantage swelled to 30-7, and the Tem-Cats never pulled within single digits, trimming the deficit to a dozen points, 56-44, in the game’s final minutes.

Temple senior Wilashia Burleson finished with a game-high 24 points and eight rebounds in the loss.

With the victory, the Lady Knights maintain a share of the district lead heading into Friday’s home game against Belton, and while Nelson would welcome another hot start, she is focused on other objectives.

“We have to stay patient against Belton,” she said, “especially on defense, where we need to remain consistent until we get two hands on the ball.

“And it’s going to be the same thing offensively, because when we allow our offense to work, it produces.”

BOYS BASKETALL: Knights hold on for road victory at Temple

TEMPLE — Temple kept reaching the doorstep and Harker Heights continued to turn away the Wildcats.