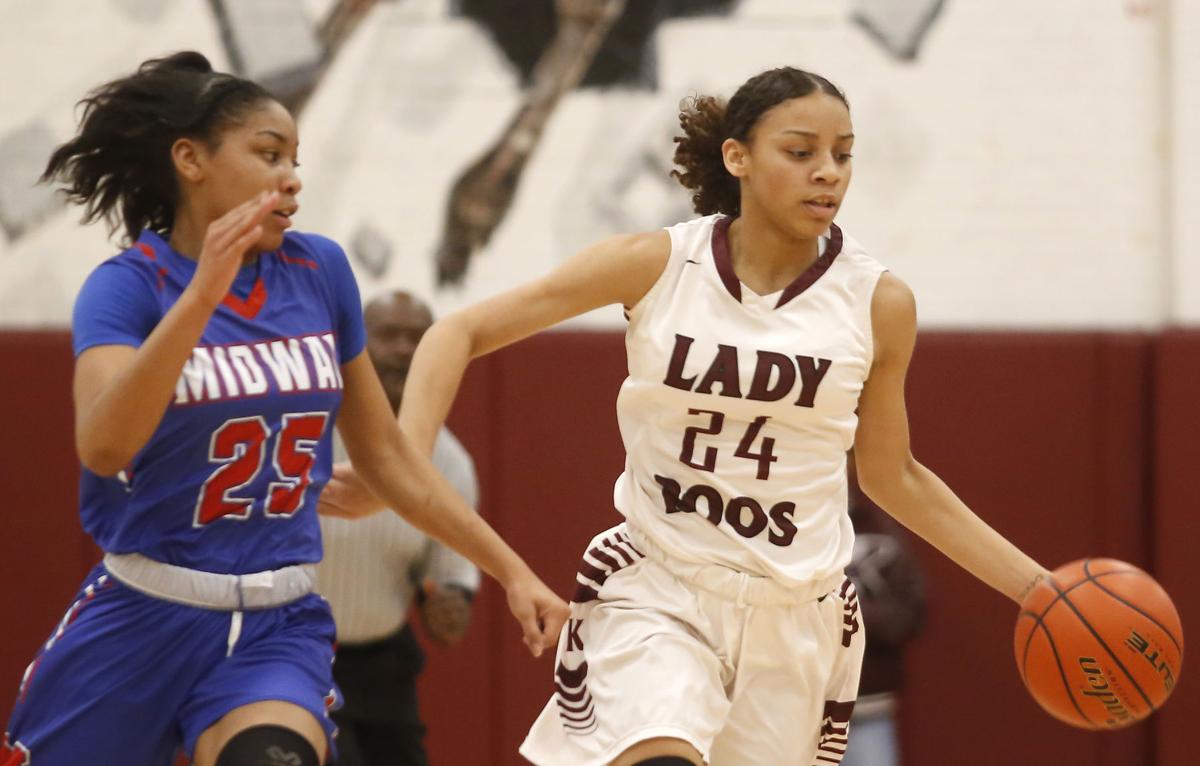 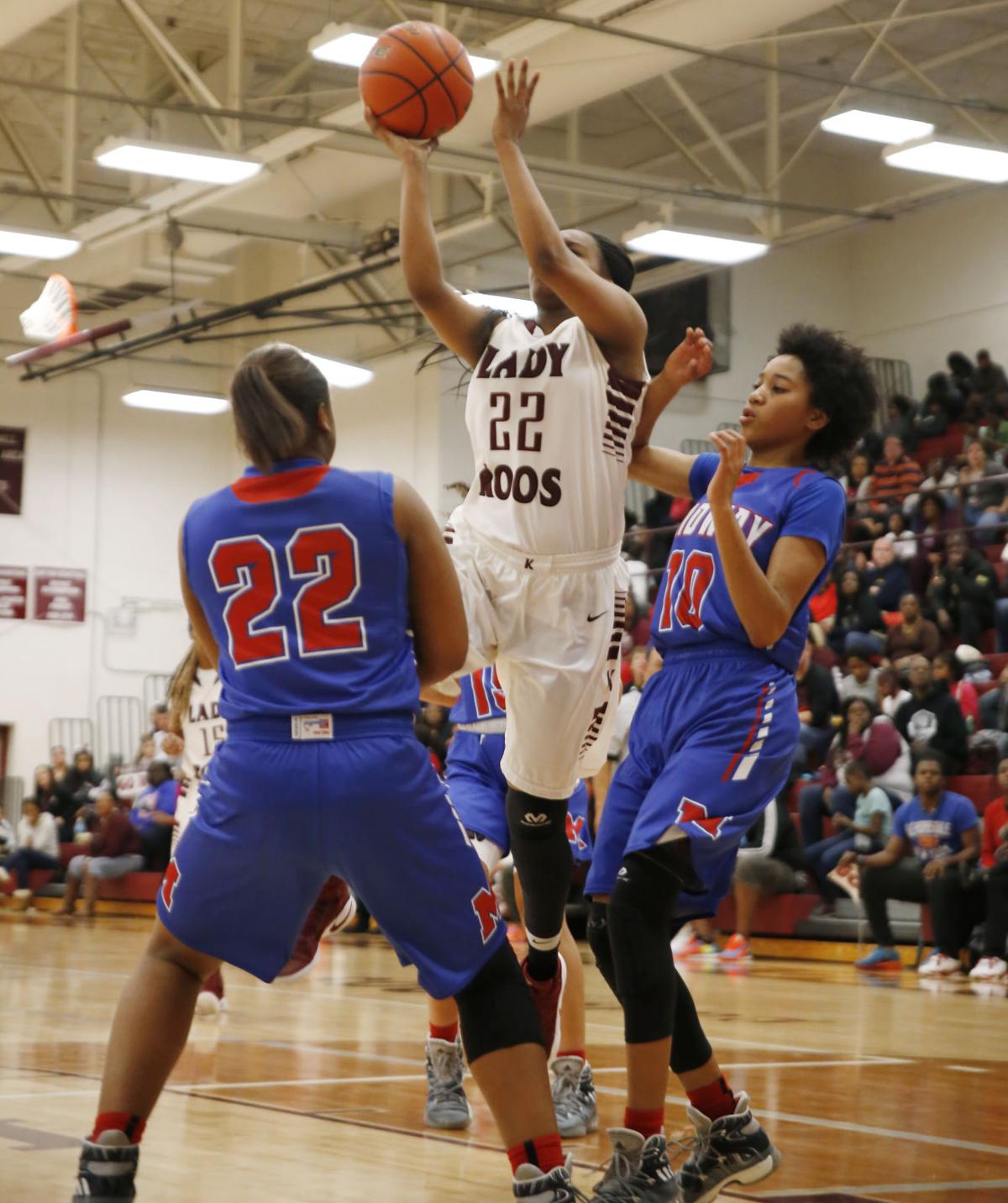 Killeen High's Jaida Burkes, center, goes up for a shot between Waco Midway's Kayla White, right, and Janaiya Davis on Friday at Killeen. 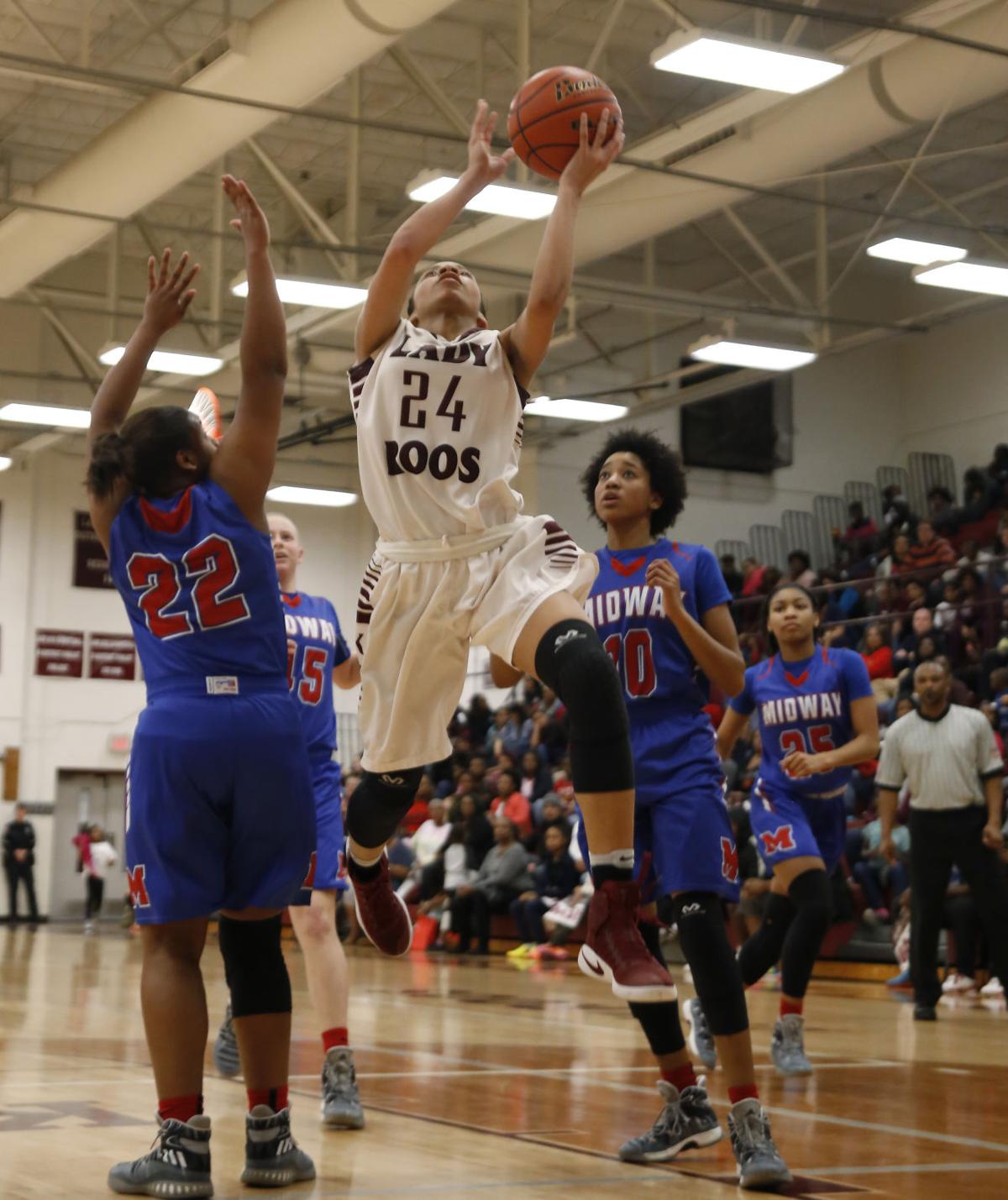 Killeen High's Cierra Penn (24) shoots between Waco Midwaydefenders during their game Friday at Killeen High School. No. 23 Midway won 62-60 at the buzzer. 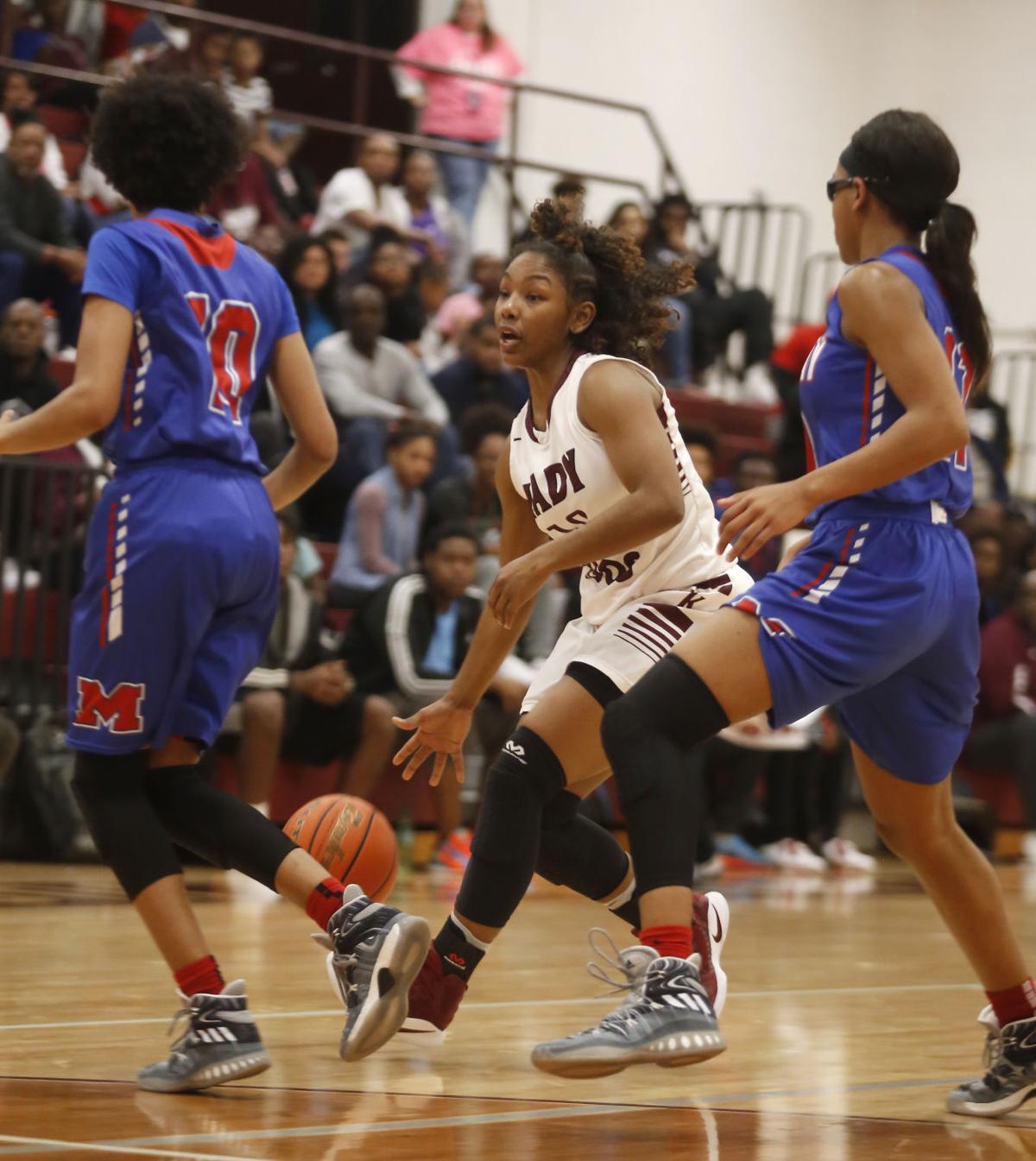 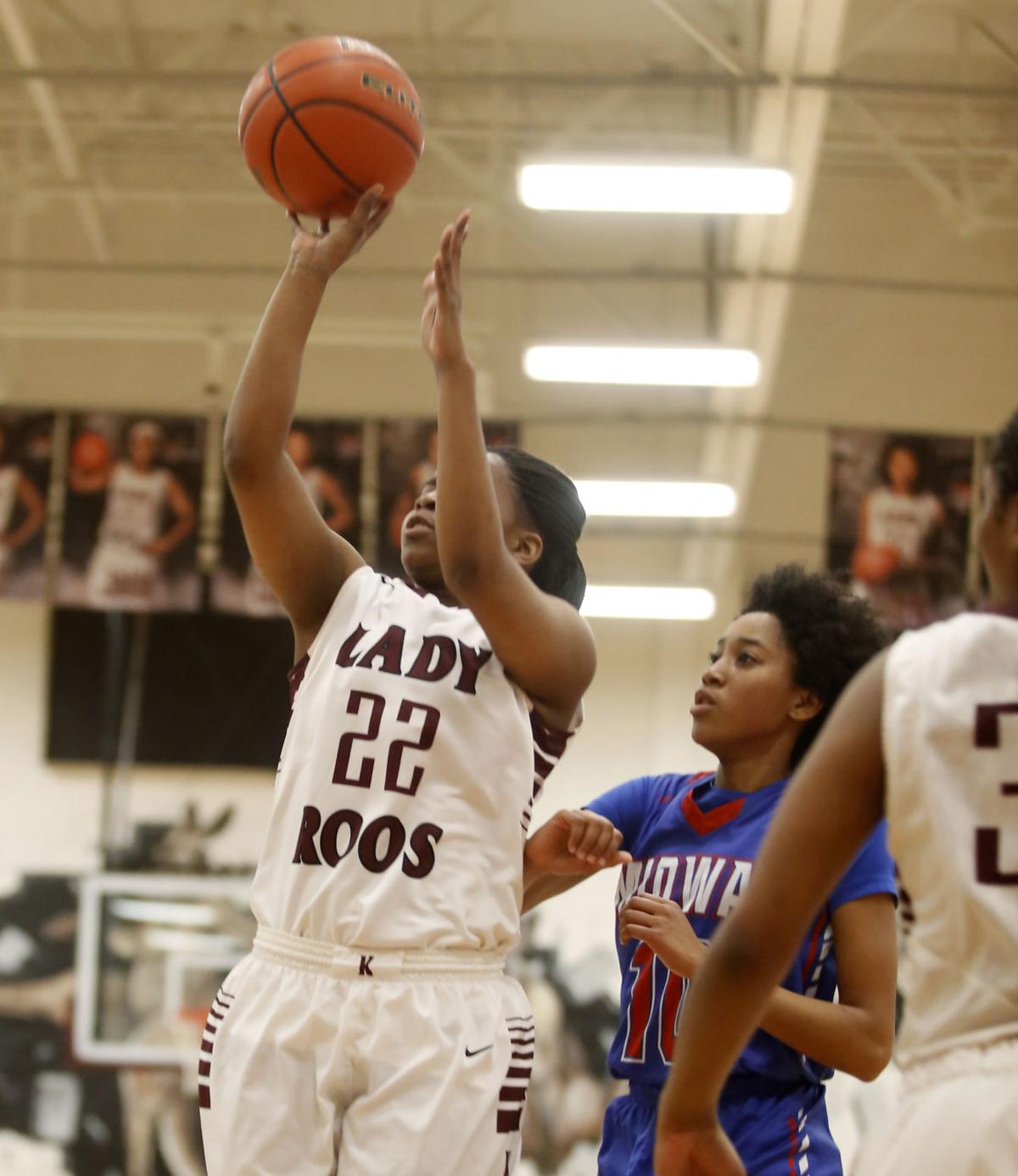 Killeen High's Jaida Burkes, center, goes up for a shot between Waco Midway's Kayla White, right, and Janaiya Davis on Friday at Killeen.

Killeen High's Cierra Penn (24) shoots between Waco Midwaydefenders during their game Friday at Killeen High School. No. 23 Midway won 62-60 at the buzzer.

The gym inside Killeen High School was rocking from opening tip to finish Friday night thanks to the show the Lady Kangaroos and 23rd-ranked Waco Midway put on the floor.

As the contest came to a finish, each team put their own exclamation point on it.

With just seven seconds left in the fourth quarter, Killeen’s Alexus Scharkley accepted a kickout pass from Cierra Penn at the top of the key and buried a 3-pointer to tie the game at 60-60.

But the Pantherettes had time.

Barbara Benson accepted the subsequent inbound pass, drove the length of the floor and missed a layup. Kayla White came down with the rebound, however, and put the ball up and in as time expired to lift Midway to an exhilarating 62-60 victory.

The exciting finish capped off a ballgame that was a seesaw battle throughout.

Lady Kangaroos head coach Jennifer Graham knew many people would point to the final seven seconds as the point they lost, but she said there were many mistakes — such as their 15 total turnovers — that didn’t help.

“There were things at the beginning of the game we shouldn’t have let happen,” Graham said. “The last seven seconds, it’s heart-wrenching. It’s a learning experience, but it’s something we have to move on from.

“We can’t turn back the hands of time and replay that game, and all due respect to Midway. They had the will to win and did everything they could, even down to the last second.”

Midway (25-5, 9-2) ended up taking a slim 31-29 advantage into halftime, but Penn sank two free throws for Killeen to tie it right out of the break. Harris then swished a 3-pointer for the Pantherettes, however, sparking a 6-0 spurt to put her team up 37-31 with 6:25 left in the third period.

The Lady Kangaroos responded in kind by exploding on a 14-2 surge to end the stanza for a 45-39 cushion. Scharkley started the run with a bucket after Johnson avoided a Midway trap on the right wing with a leaping, spinning pass to the open senior underneath.

Penn scored six points during the outburst, and each of Johnson, Moore and Jaida Burkes also added buckets.

But the Pantherettes wasted no time cutting into the margin and regaining the lead, as they scored eight straight to pull ahead 47-45.

The two teams then traded points until the 2:04 mark in the fourth quarter when, trailing 55-54, Burkes scored on a driving layup to put Killeen back up by one.

Midway replied with four straight free throws for a three-point lead. Penn then hit 1 of 2 free throws for the Lady Kangaroos, and Keziah Bachert made 1 of 2 to put the Pantherettes back ahead 60-57 and set up the last-second fireworks.

Despite losing their leading scorer late, Graham was proud of how the team responded after Johnson had to exit the game.

“We know that one player is not going to win the game for us,” Graham said. “We expect that if a player gets fouled out, no matter who it is, someone else steps up and does what they’re supposed to do. I’m definitely glad we had some players step up.

“In the end, it was just heartbreaking.”

The Lady Kangaroos are scheduled to face Central at San Angelo on Tuesday at 7 p.m.

It was just one step in the middle of Killeen's current run of success, but it was a big one.

Veteran of Operation Iraqi Freedom. Previously spent time as sports editor at both the Hereford Brand and the Gatesville Messenger. Graduate of West Texas A&M University.