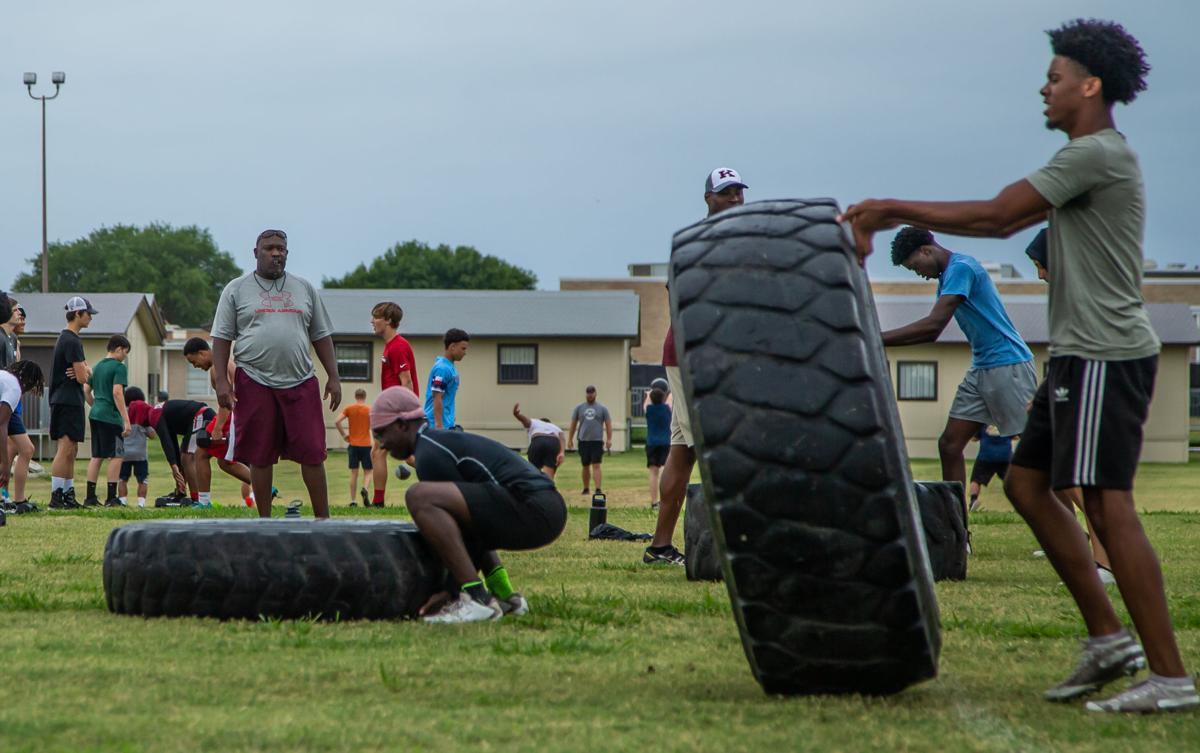 Killeen High athletes do push-ups at the school’s strength and conditioning workouts Monday morning. About 120 athletes are participating in the sessions. 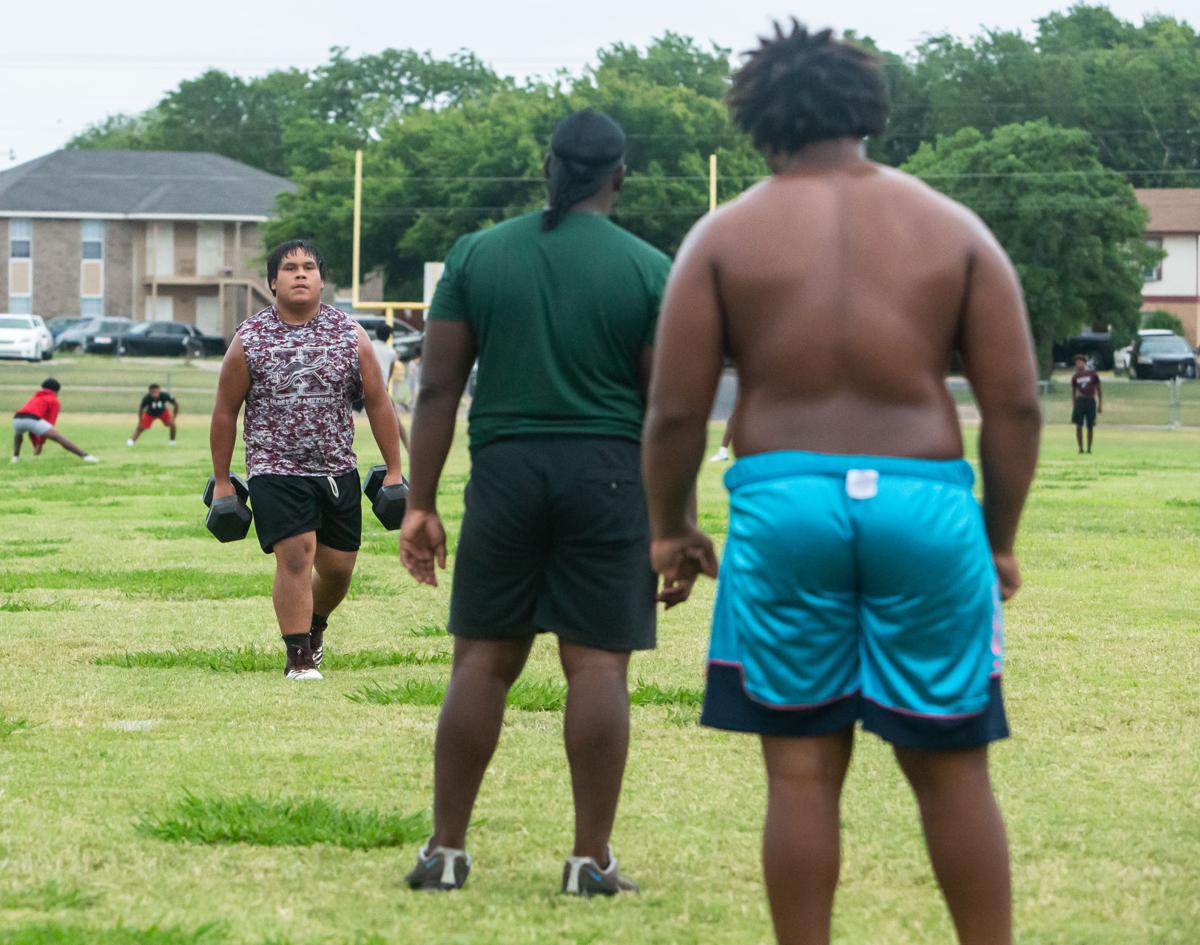 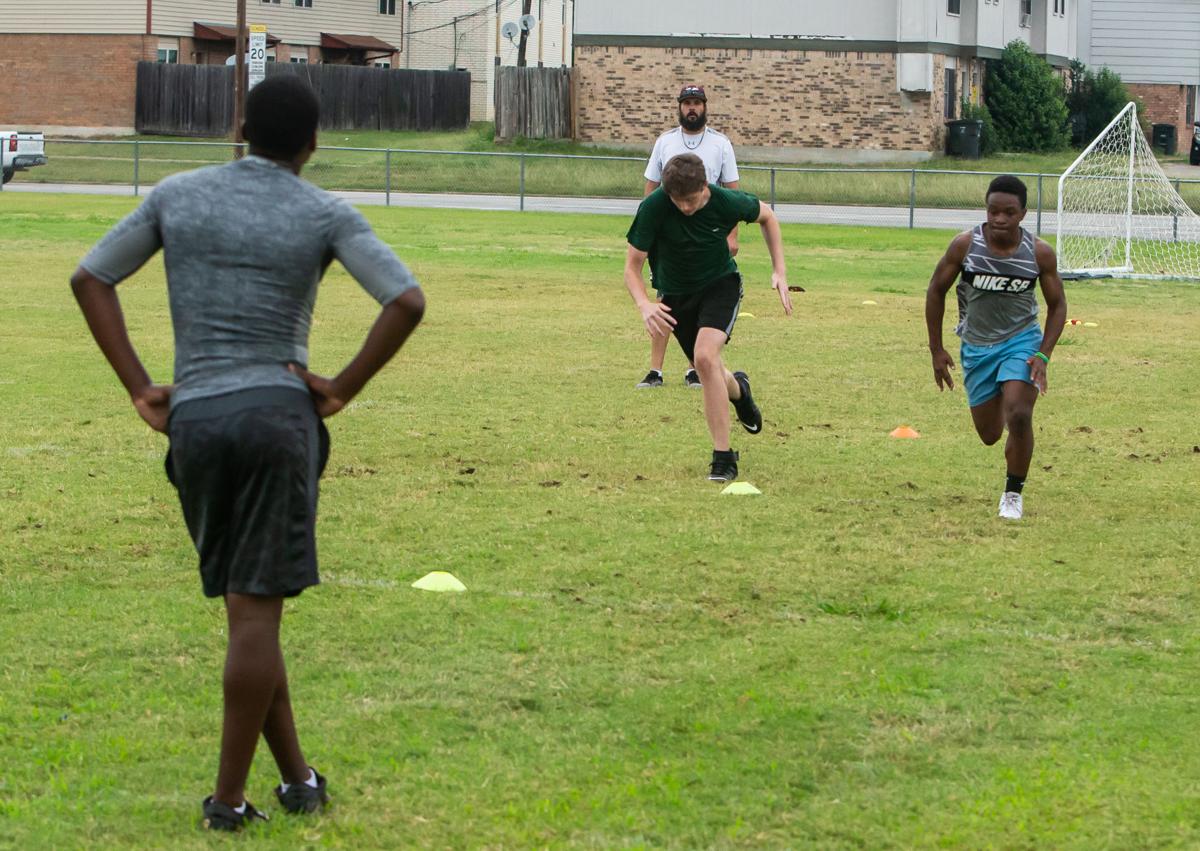 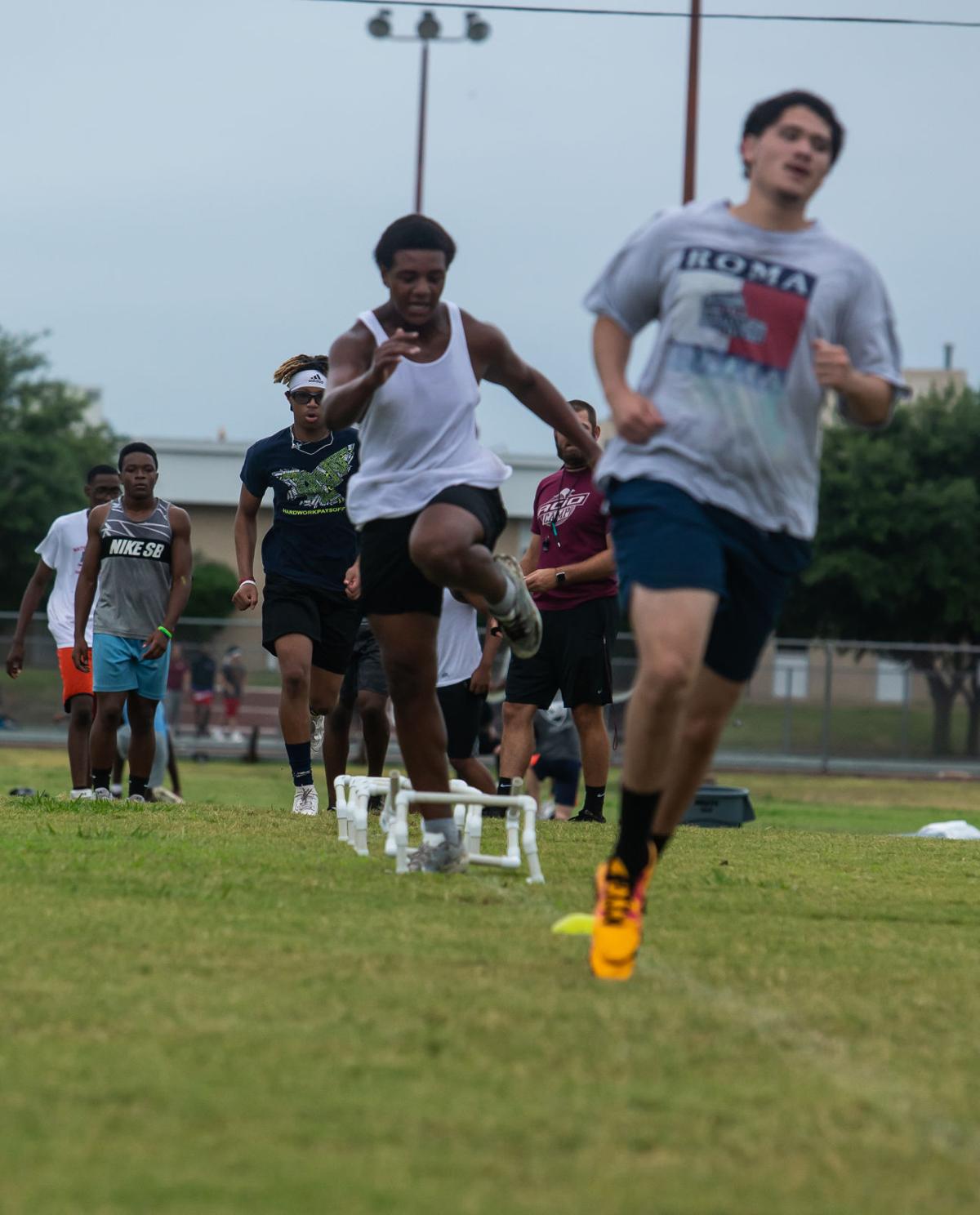 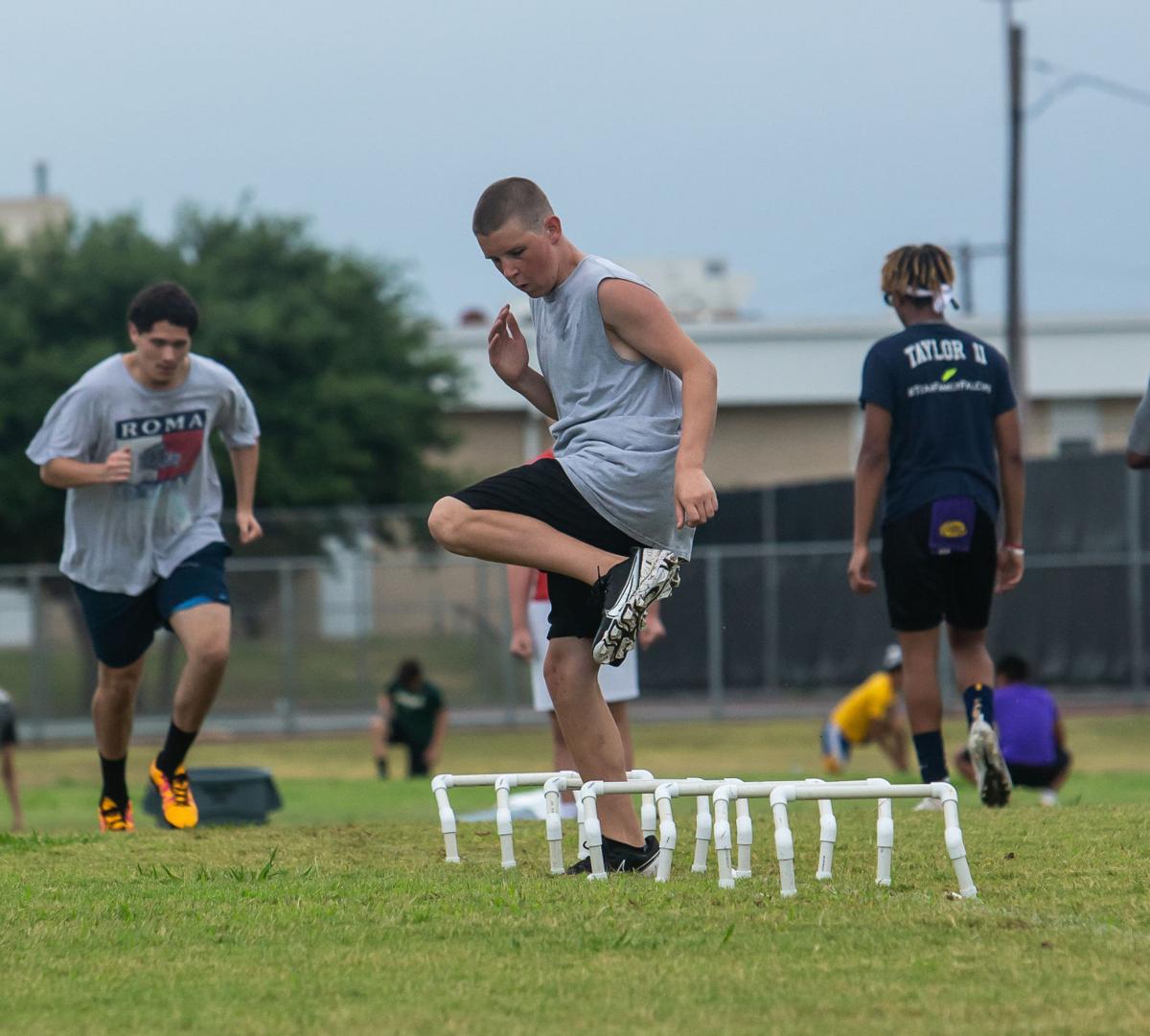 Athletes work on agility drills at Killeen High School’s strength and conditioning workouts Monday morning. About 120 athletes are participating in the sessions. 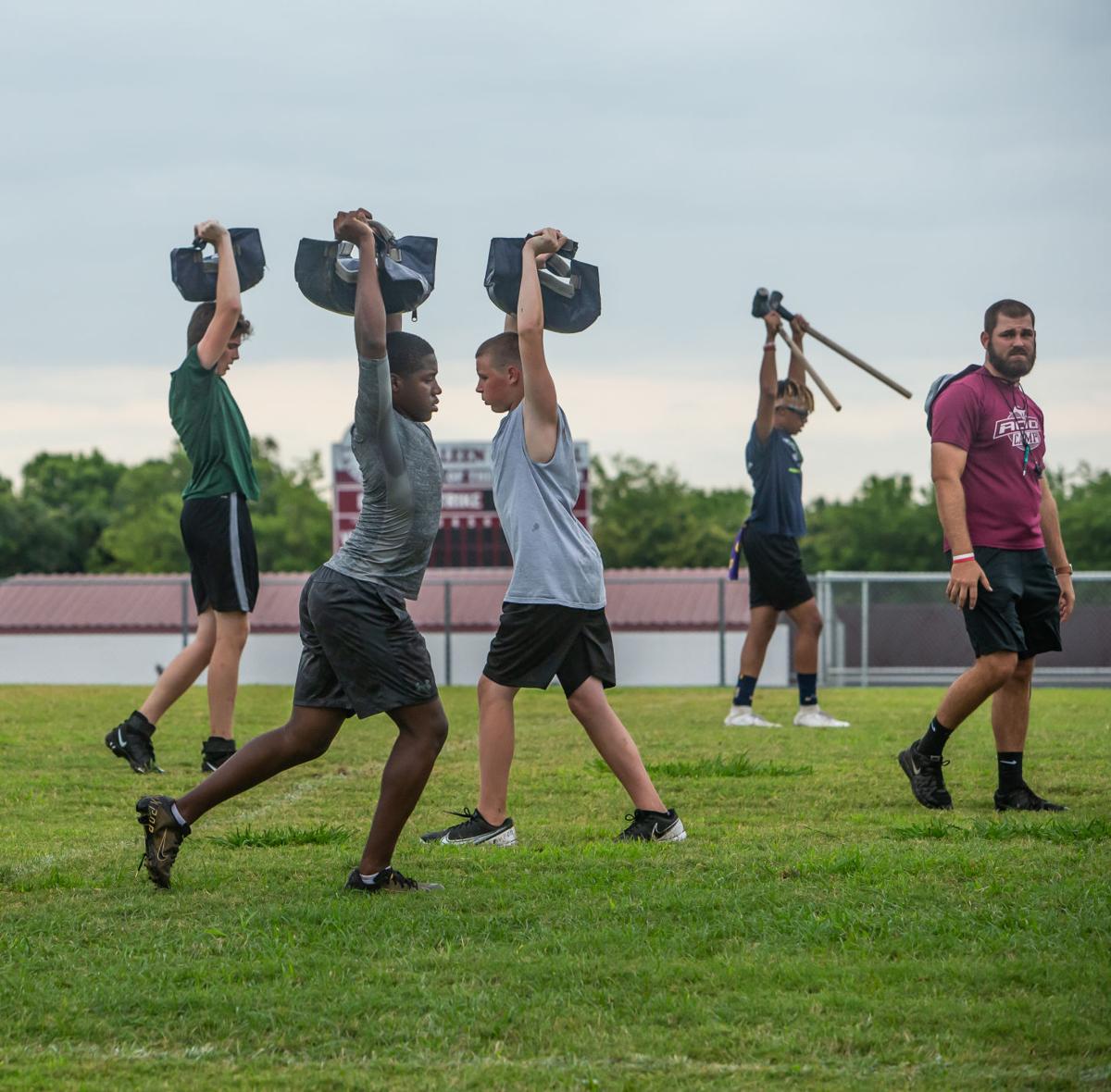 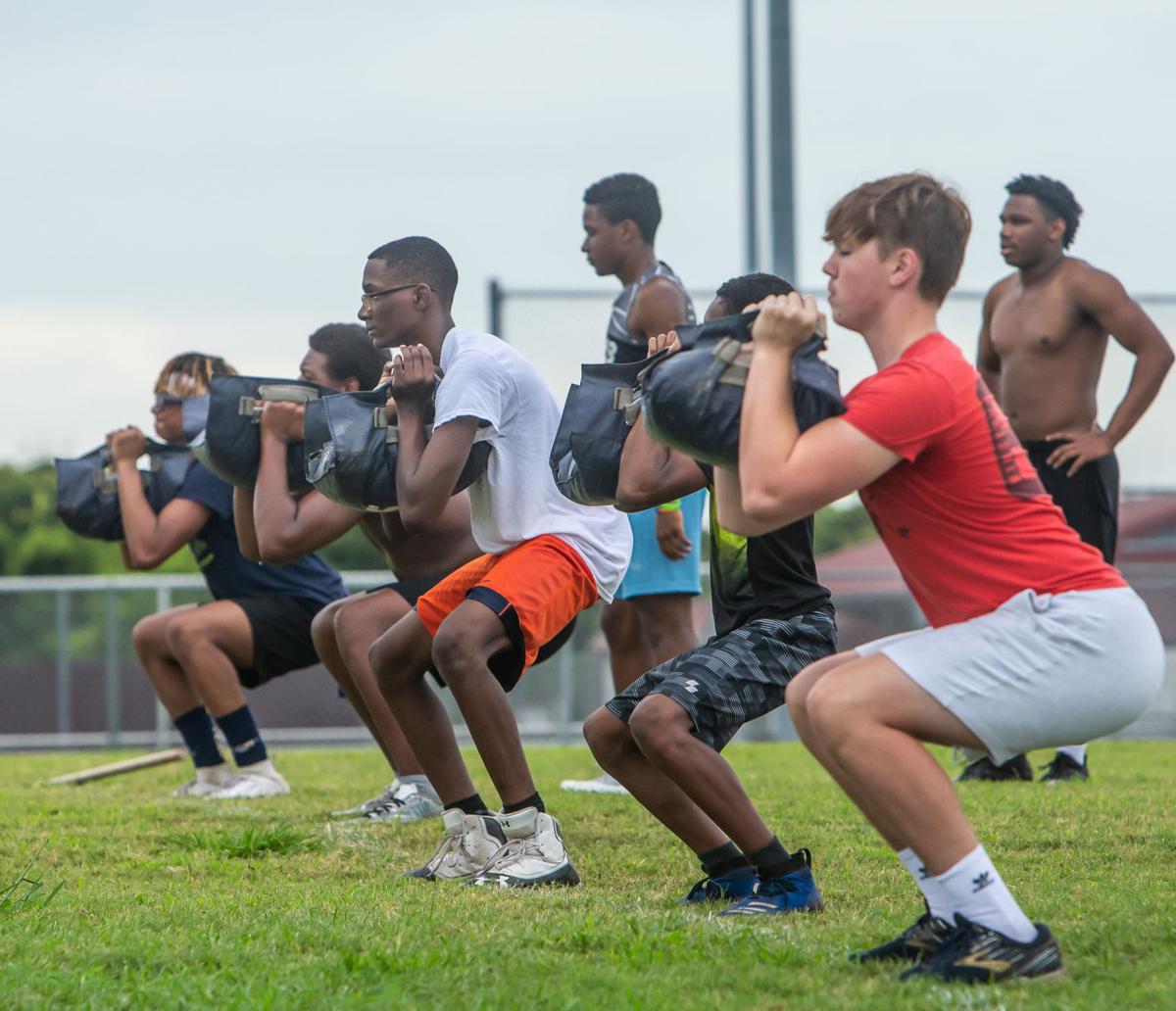 Killeen High football players do up-down drills during a strength and conditioning workout Monday morning. About 120 athletes are participating in the sessions.

Killeen High athletes do push-ups at the school’s strength and conditioning workouts Monday morning. About 120 athletes are participating in the sessions.

Athletes work on agility drills at Killeen High School’s strength and conditioning workouts Monday morning. About 120 athletes are participating in the sessions.

Killeen High football players do up-down drills during a strength and conditioning workout Monday morning. About 120 athletes are participating in the sessions.

It’s been a productive two weeks for the Killeen High football team at the Roos’ summer strength and conditioning camp.

But all that progress is being threatened by a recent surge in COVID-19 cases around the state that is forcing a growing number of schools and districts to shut down their summer workouts.

The Austin American-Statesman on Monday reported that Taylor was postponing its summer sessions, the seventh school in the Austin area to do so in the last three days.

“If I had to be honest about it, it’s a scary time,” Killeen High coach Neil Searcy said, “not knowing if someone is going to get sick or not. And we’re trying to do our best to keep that from happening.

“We want to play football but the main thing is we want to make sure that our kids are safe.”

That issue has been the lone concern. Searcy said he couldn’t be more pleased with his team’s work. The Roos began their summer program on June 8 with athletes in various stages of condition.

“There were some kids that you could tell had been working out,” Searcy said. “We had been holding Zoom meetings and Zoom workouts with some of our kids, so we knew

some of them were working out, but you did have some that were pretty out of shape because they hadn’t done anything in 2½ months.”

By the end of last week, all of the players were on pretty equal footing, a feat that was demonstrated when all of them were able to complete a 10-minute run without walking.

“That told me that things were going good and they were getting in pretty good shape because they could run the whole 10 minutes.”

The pandemic that closed schools around spring break wiped out spring football, leaving Searcy and his staff scrambling to figure out where the team’s needs are and who can fill those spots. Spring drills are a time when junior varsity players and varsity reserves from the previous season get a chance to compete for starting jobs, and sophomores get a chance to show they are ready for the varsity level.

Instead, Killeen coaches are using the allowable 60-minute skills instruction portion of the summer camp to aid in that process.

“We do have an opportunity to evaluate them but it’s not the same as having them in full pads and practicing and getting to see them in live competition,” Searcy said. “But we’re adapting and making it work for us.”

How much more time they have to do that appears to be getting murkier by the day. The Roos are scheduled to complete their summer program on July 24.

“I hope we get to finish the summer workouts, but I’ll tell you, I’m more concerned about it,” Searcy said. “Hopefully we get to keep going.”

It was a joyous day for six student-athletes of Killeen High School Wednesday, as they signed letters of intent to compete at the collegiate l…