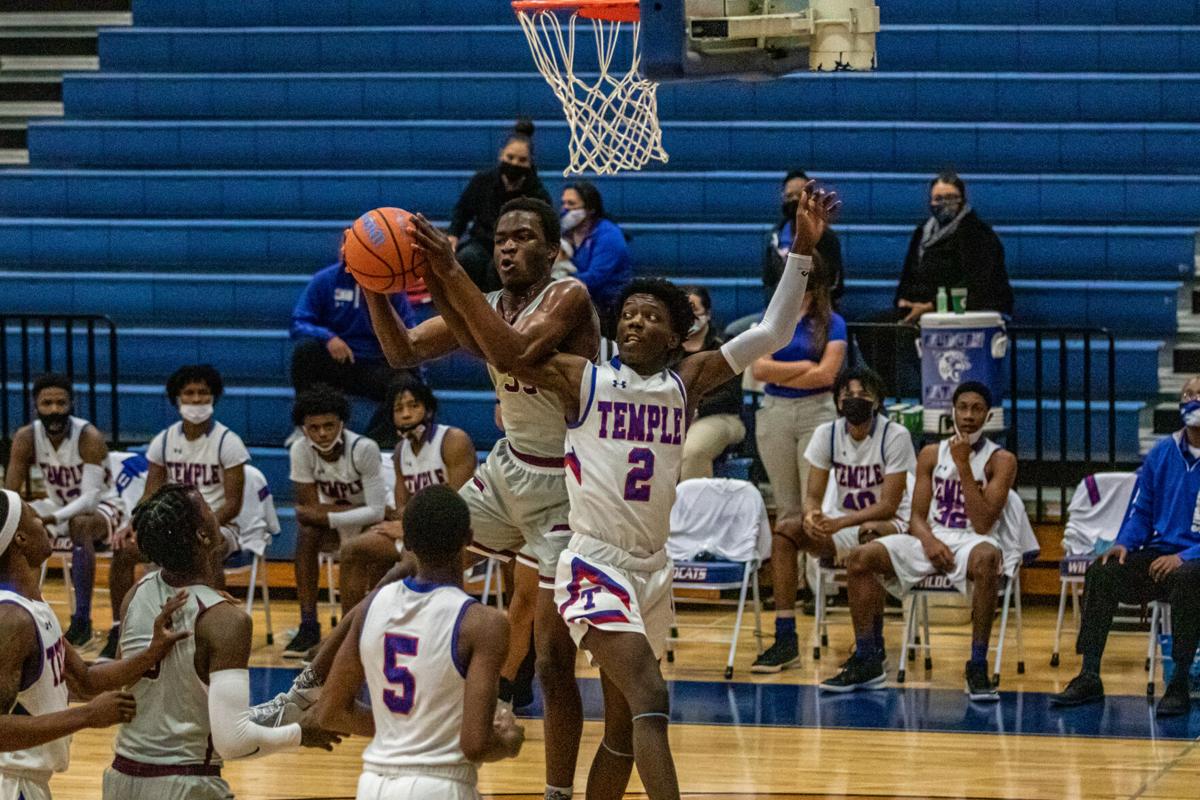 Killeen High's AB Oladipo (33) and Temple's Treyvion Wells (2) battle for a rebound on Friday in Temple. 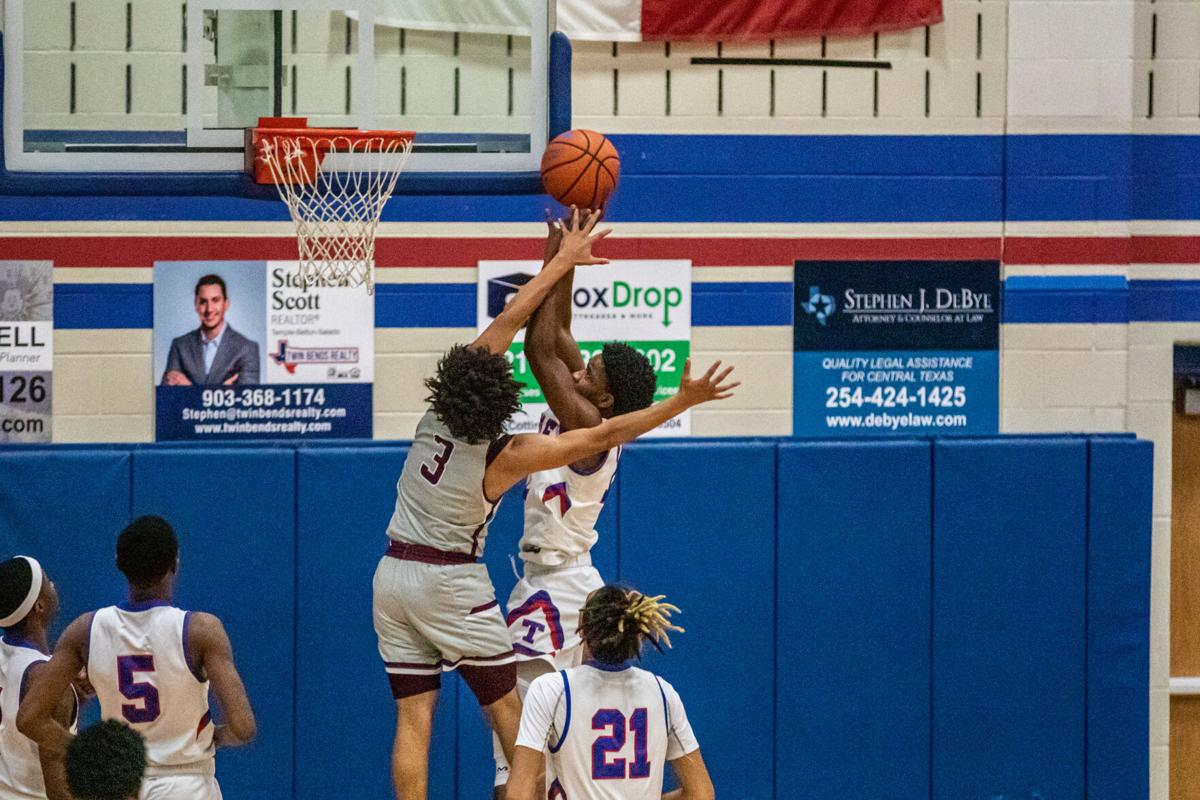 Temple's Lawrence Austin, right, puts up a shot against Killeen's Dominic Davis (3) on Friday in Temple. 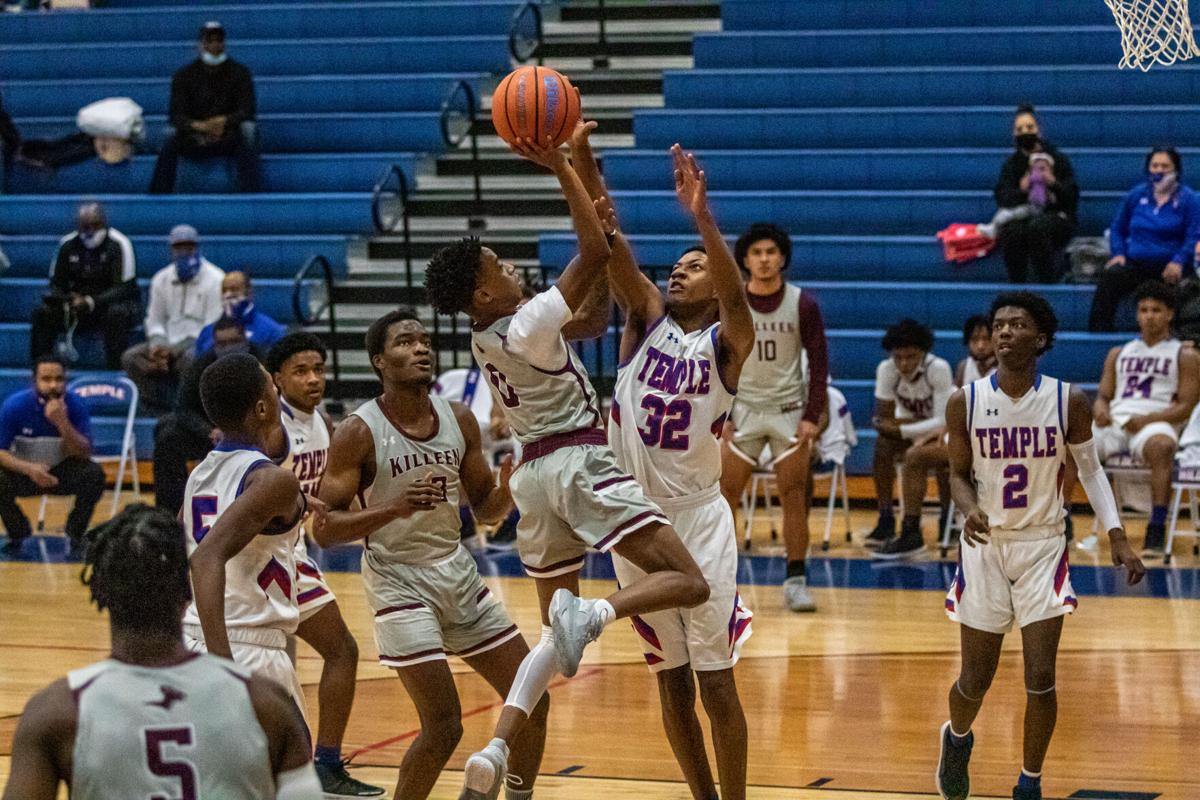 Killeen High's Jayden White (0) drives in for a shot against Temple's Joseph Stewart (32) on Friday in Temple. 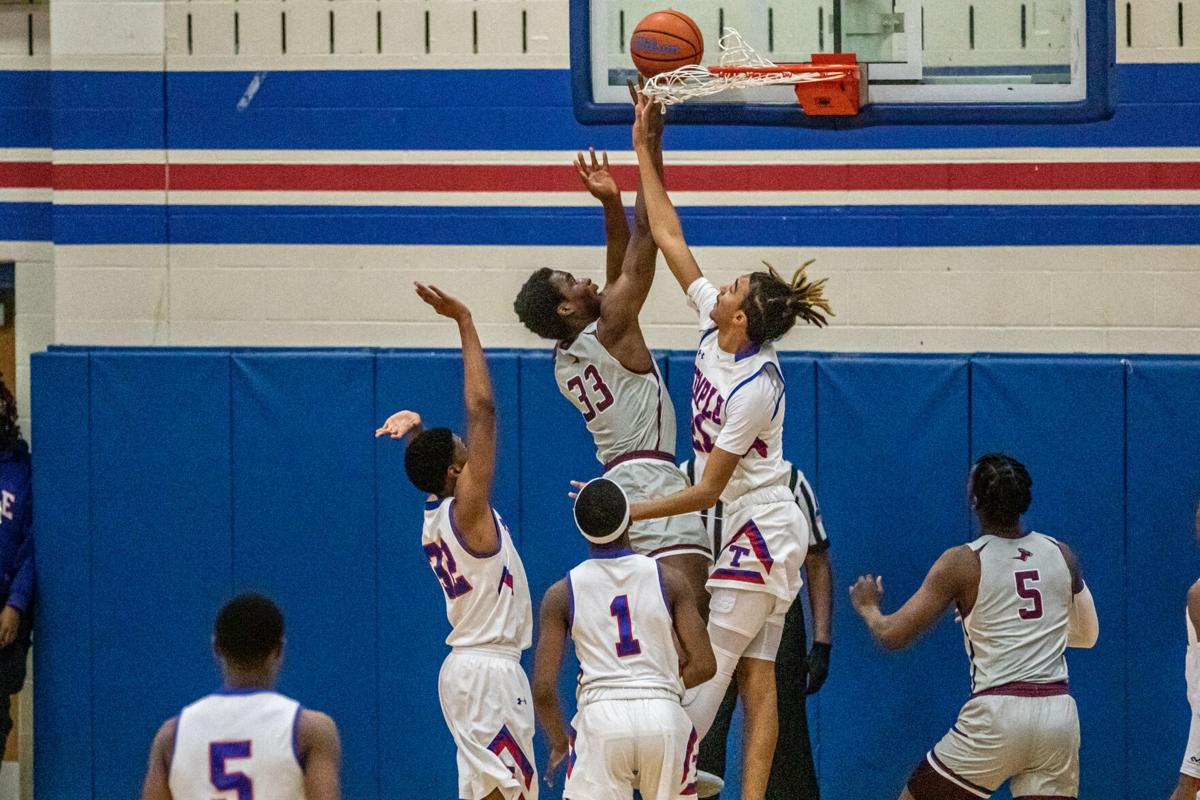 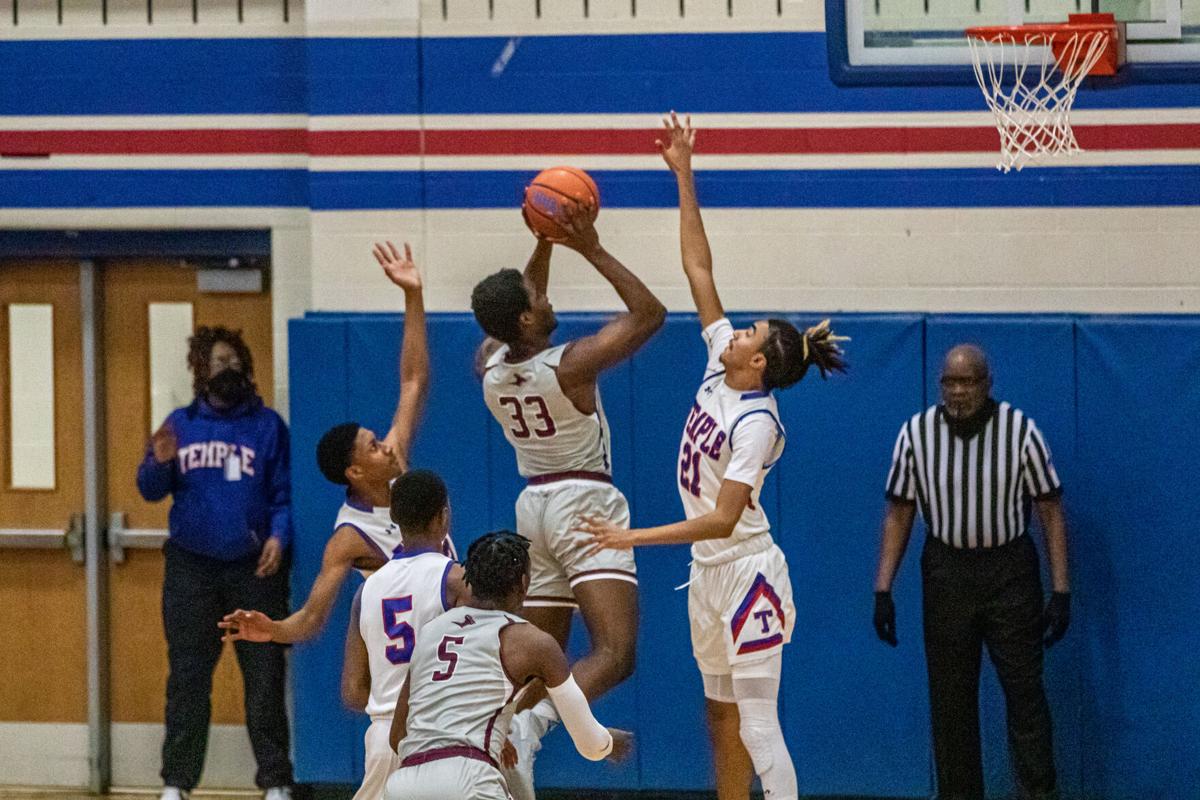 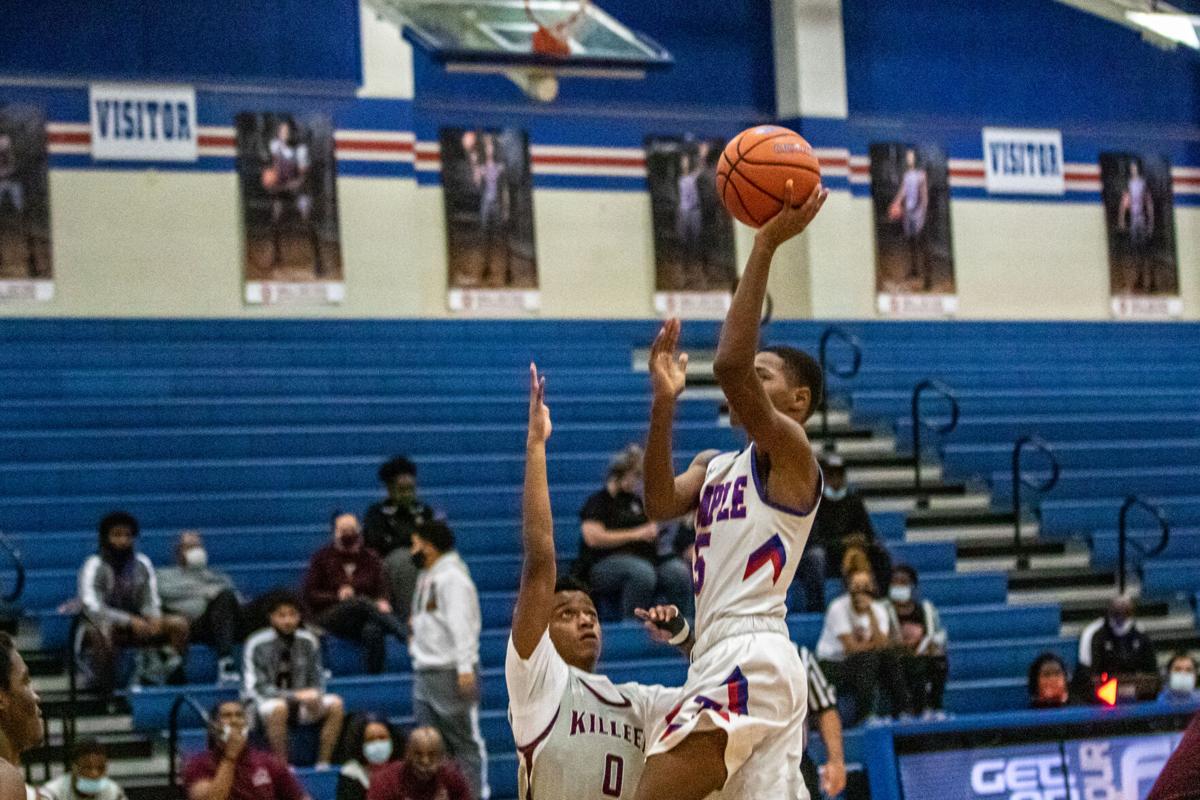 Killeen High's AB Oladipo (33) and Temple's Treyvion Wells (2) battle for a rebound on Friday in Temple.

Temple's Lawrence Austin, right, puts up a shot against Killeen's Dominic Davis (3) on Friday in Temple.

Killeen High's Jayden White (0) drives in for a shot against Temple's Joseph Stewart (32) on Friday in Temple.

TEMPLE — Learning makes up a significant part of what teams like to refer to as "the process," and it’s not just the players who are absorbing the information. One thing Temple head coach Michael Thomas apparently now knows about Jaylon Hall that he didn’t prior to Friday night is that the sophomore can dunk.

Hall scored 11 of his game-high 21 points in the fourth, including a crowd-pleasing slam that capped a key 11-2 spurt, and the Wildcats jumped into the District 12-6A win column by beating Killeen 51-45 at Wildcat Gym.

“That shocked me,” Thomas said of Hall’s two-handed finish after a feed from Aundra Jackson to put Temple ahead 51-42. “(Hall) has the physical attributes, but it’s just a matter of putting things together mentally and staying focused every day. He has an opportunity to be special, but like I told him, you have to keep working and keep trusting what we are telling you so that you can grow as a player.”

De’Marco Blas made a 3-pointer to get the Kangaroos within 51-46 late in the proceedings, but a comeback at that point wasn’t in the cards.

Jackson added 12 points and Lawrence Auston chipped in eight for Temple (4-10, 1-5), which won for the first time since Dec. 30 and snapped a three-game slide.

While Hall’s scoring scintillated in the final frame, offensive rebounds by Joseph Stewart, steals by Treyvion Wells and Auston and extra passes by Jackson to set up open looks and all-around solid defense were necessities that added up in the Wildcats’ favor as they turned a 40-all deadlock with 6:16 to play into their first district victory.

“We found a combination of guys that worked in that fourth quarter. It may be somebody different the next game, but I’m proud of the guys because the hustled, they fought and they wanted to give themselves an opportunity to have some hope,” Thomas said. “We are just trying to get better one day at a time. We are fortunate tonight because it could’ve gone either way.”

It indeed was a back-and-forth 32 minutes, with 10 lead changes.

Stewart’s offensive rebound kept alive the Wildcats’ first possession of final period. After corralling the ball, Stewart tossed out of traffic to Jackson and he found Hall, who made a layup while being foul. The made free throw boosted Temple in front 39-38. Jayden White’s layup put the Kangaroos up 40-39 before Hall’s free throw tied it at 40.

Auston’s layup set up by a steal from Wells opened the decisive run that also featured a bucket by Stewart, Hall’s 3-pointer and the aforementioned dunk.

“I’m just very appreciative. (Killeen has) some good athletes and players over there. So, again, we are fortunate to get a win here tonight,” Thomas said. “We just want to get back in the gym tomorrow and try to get better. That’s all we are trying to do.”

Jayce Borja and Leo Solis averaged 213 and 212, respectively, to lead the Harker Heights boys bowling team to a narrow 9-8 victory over the Ki…