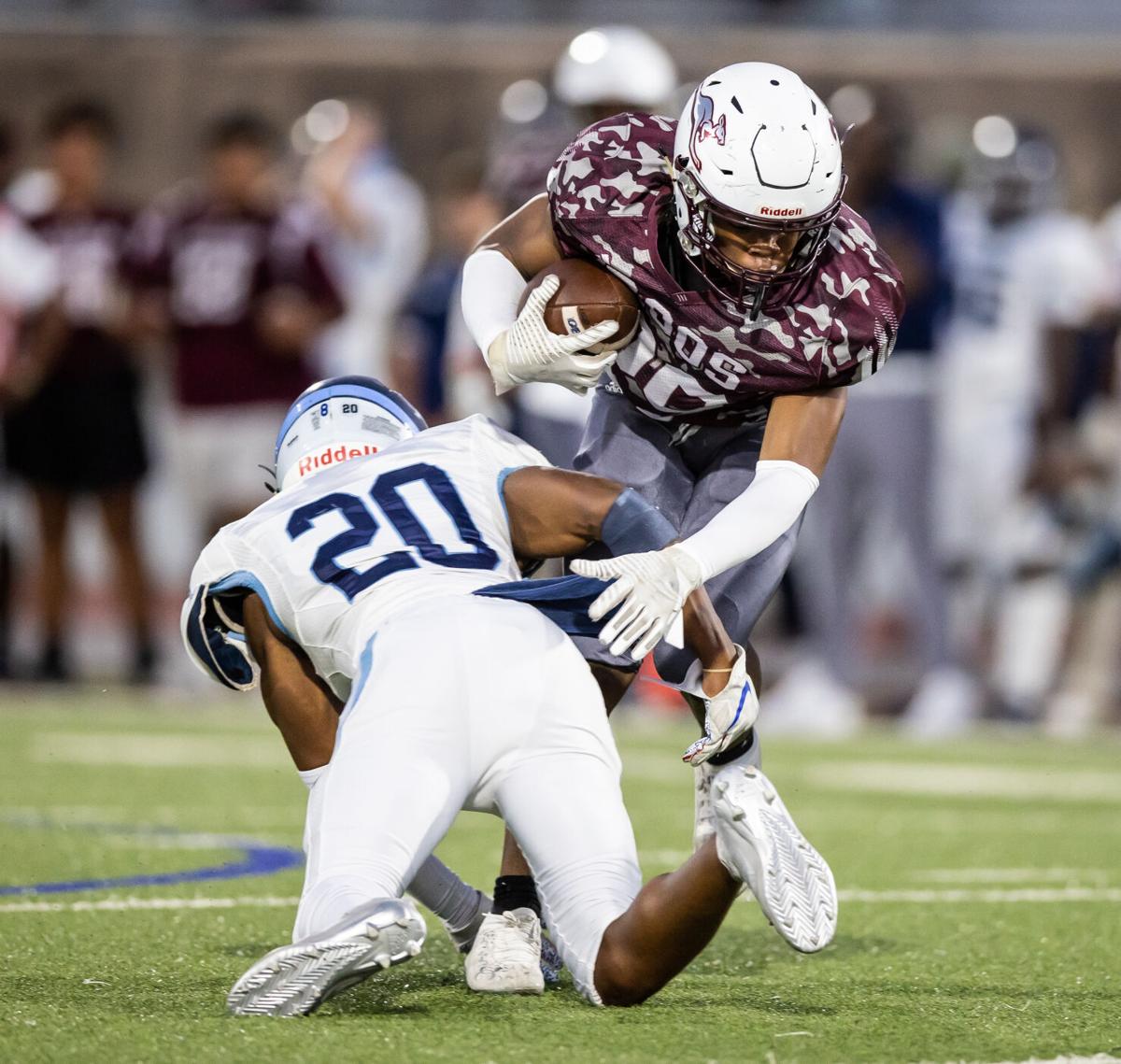 Killeen High's Lamarrion Cotton (29) runs for a first down after a catch as Bryan’s Du'wayne Paulhill (20) makes the tackle at Leo Buckley Stadium on Thursday, Oct. 14, 2021. 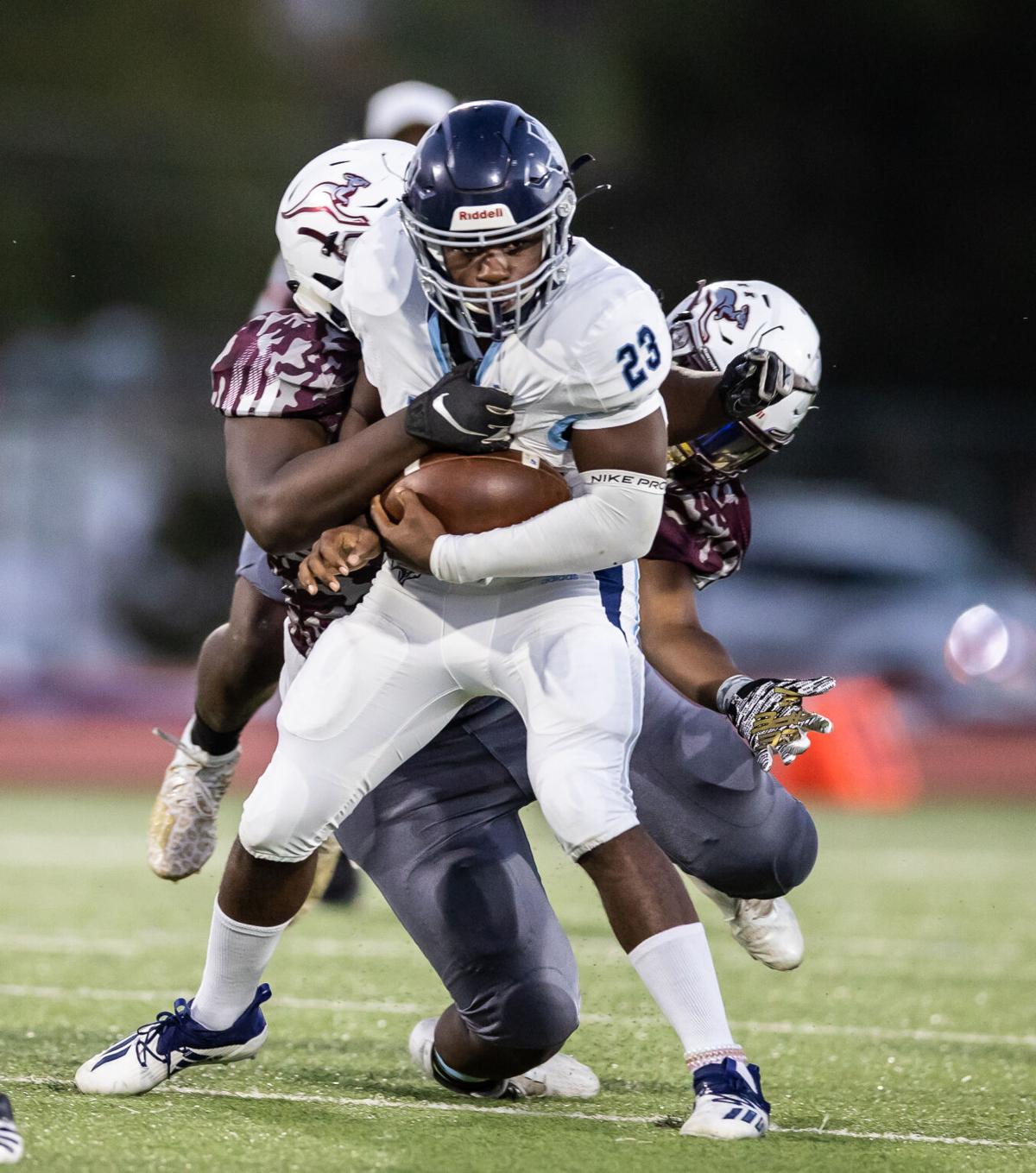 Bryan’s Isaiah Nutall (23) carries as a Killeen defender is tackling him at Leo Buckley Stadium on Thursday, Oct. 14, 2021. 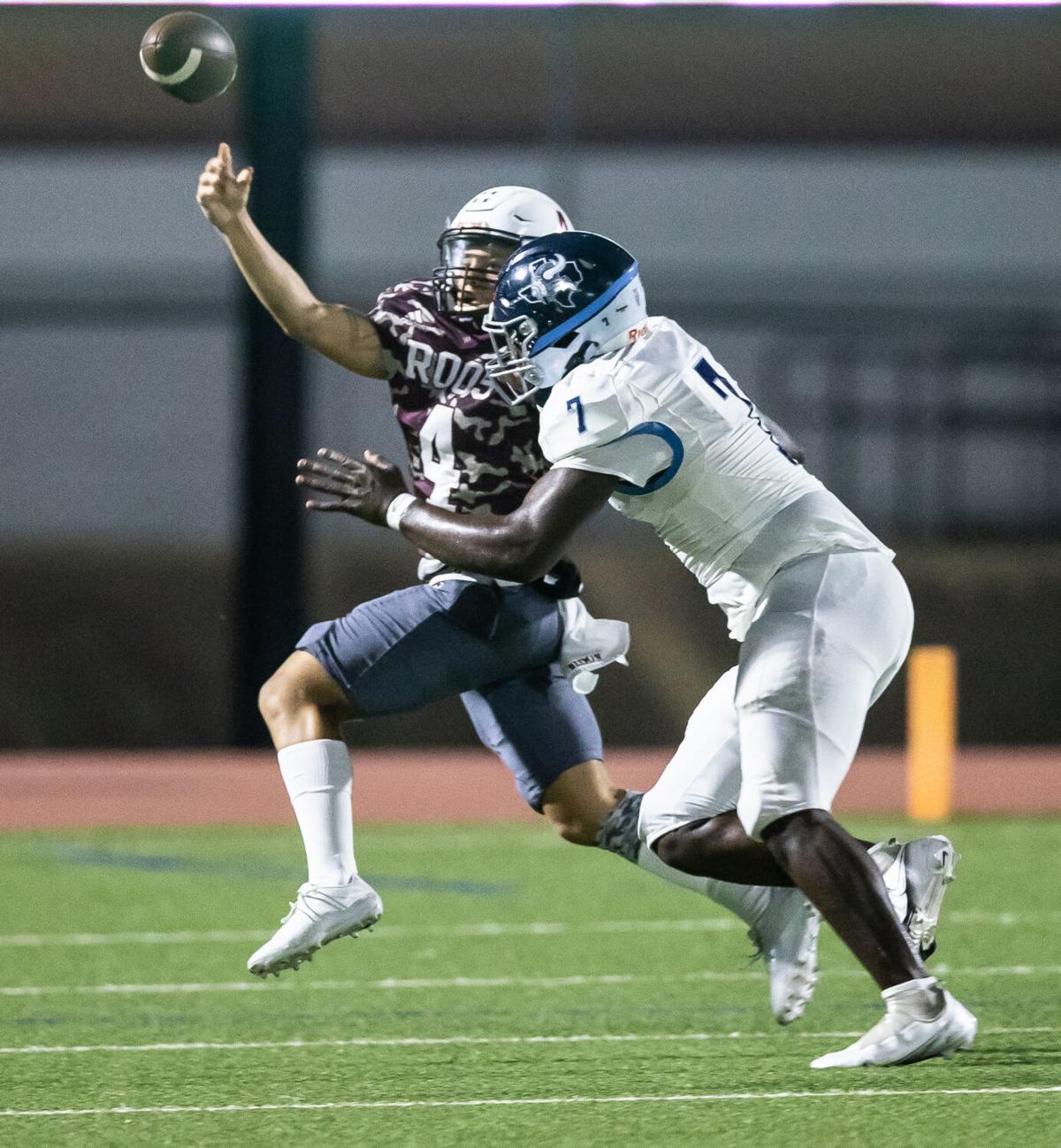 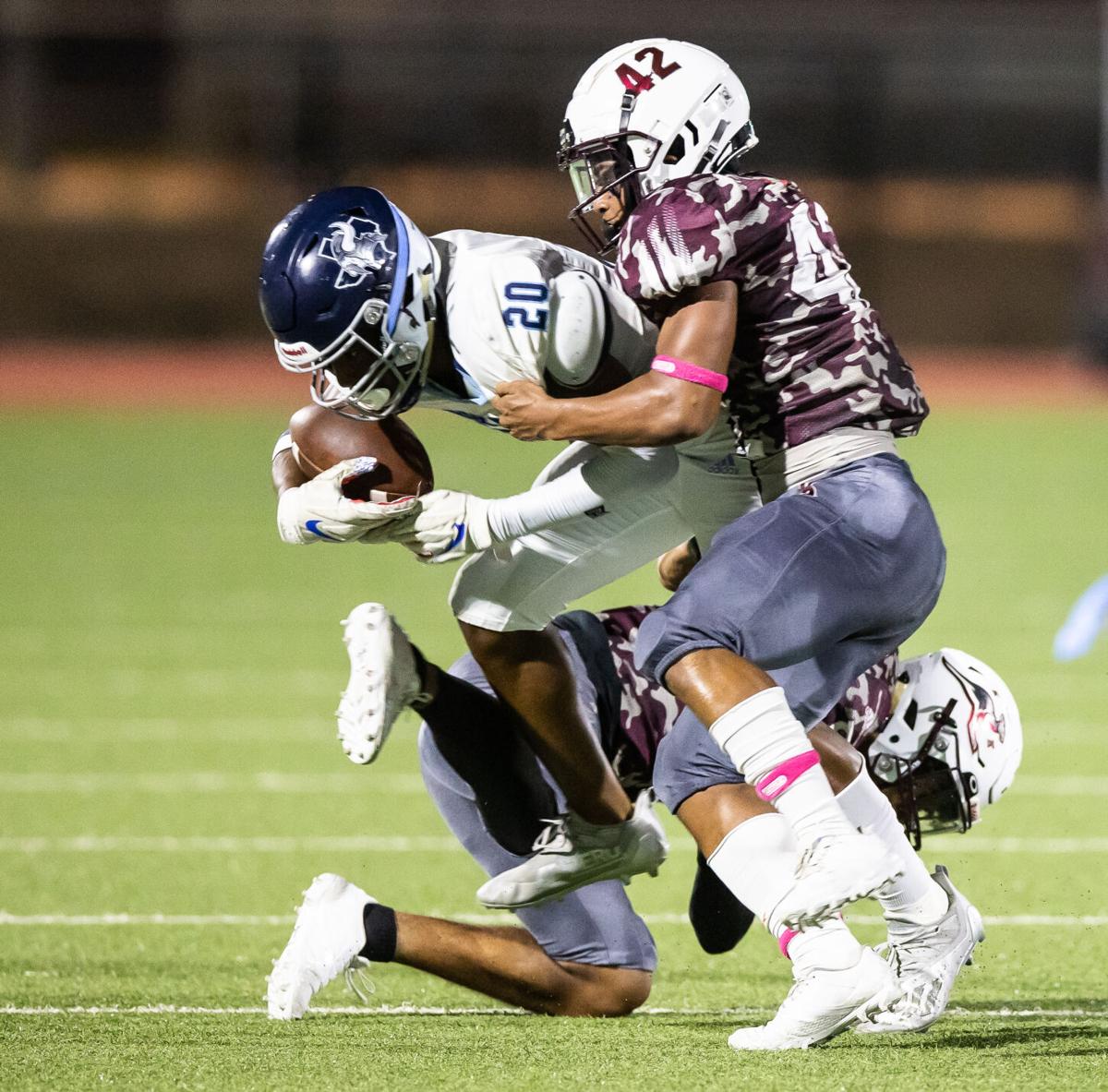 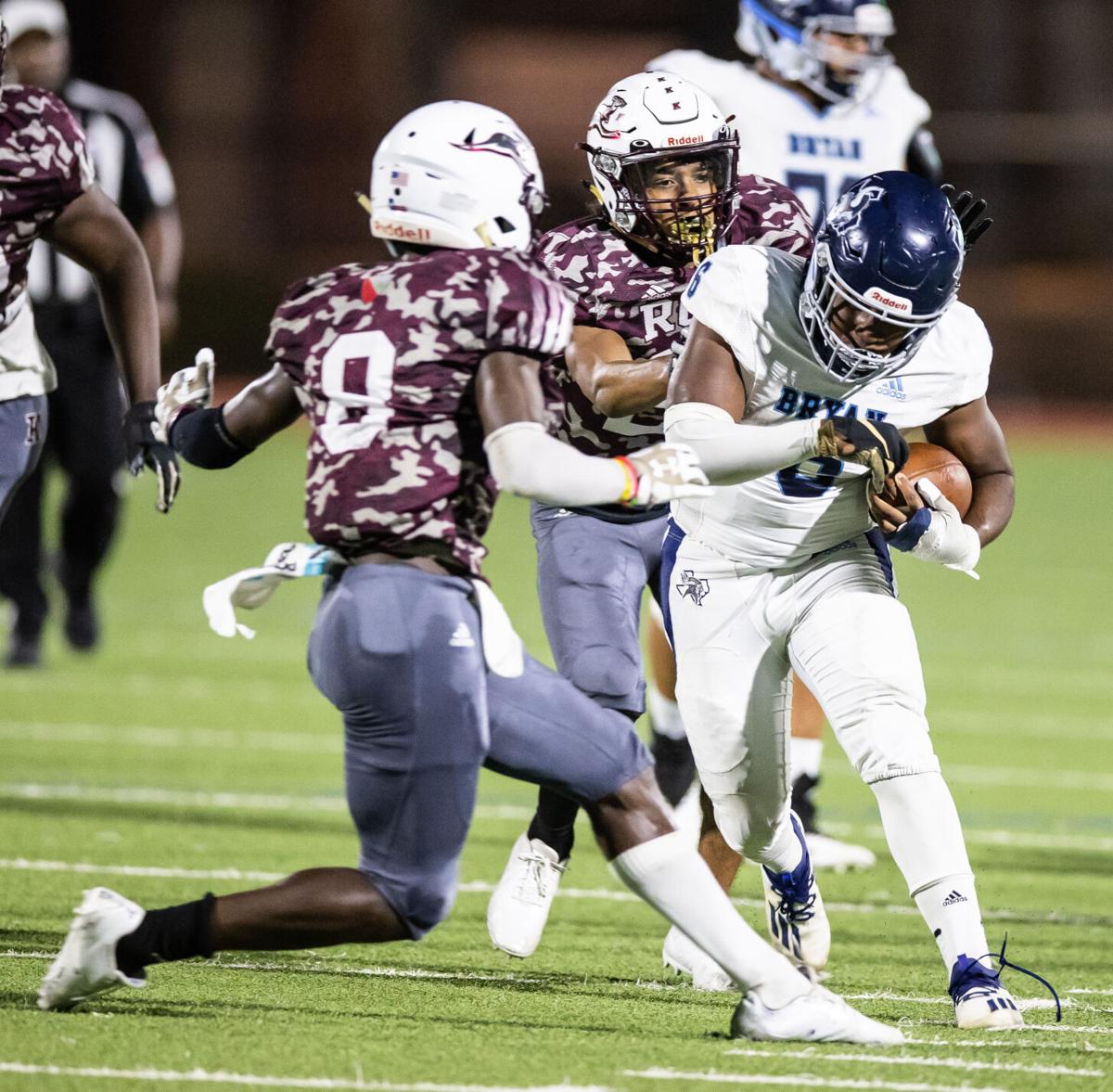 Bryan's Tason Devault (6) breaks through as Killeen's Gregory Gant (8) and another defender are able to stop him at Leo Buckley Stadium on Thursday, Oct. 14, 2021. 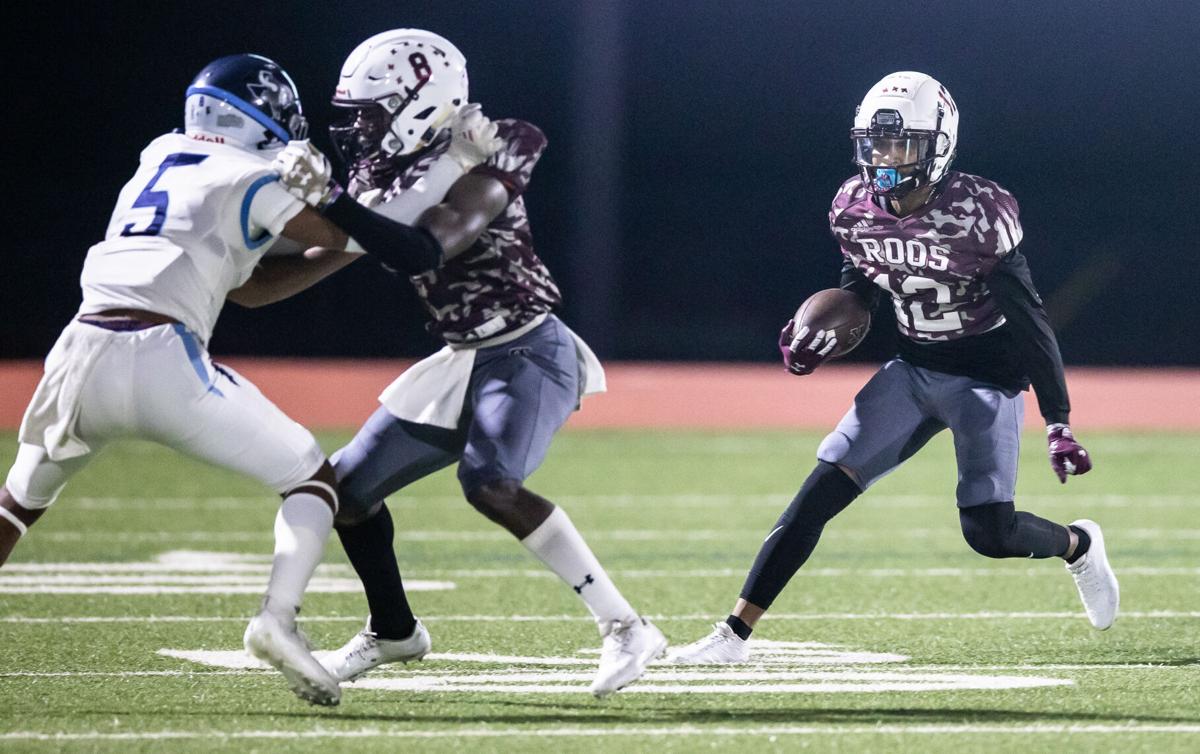 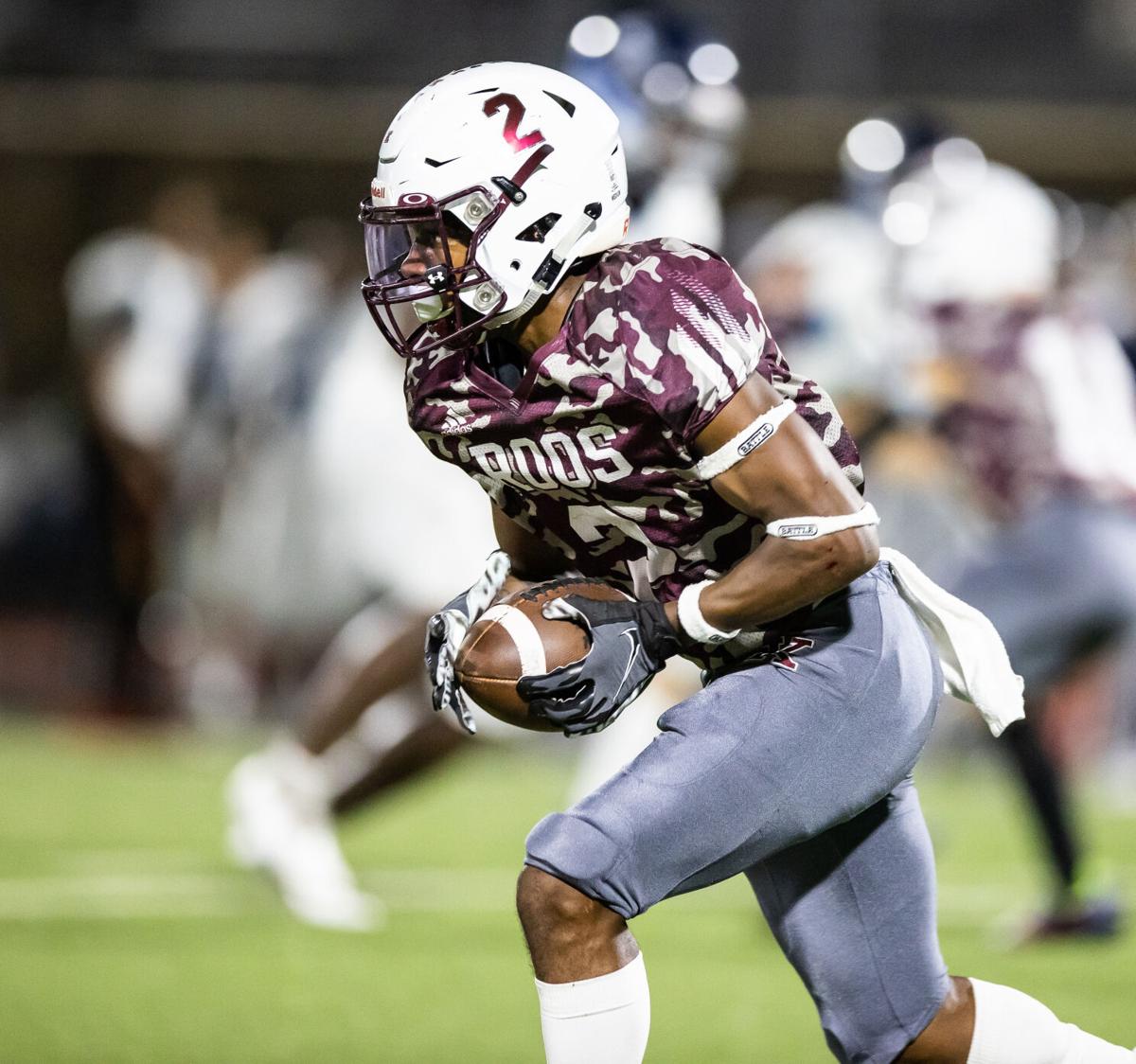 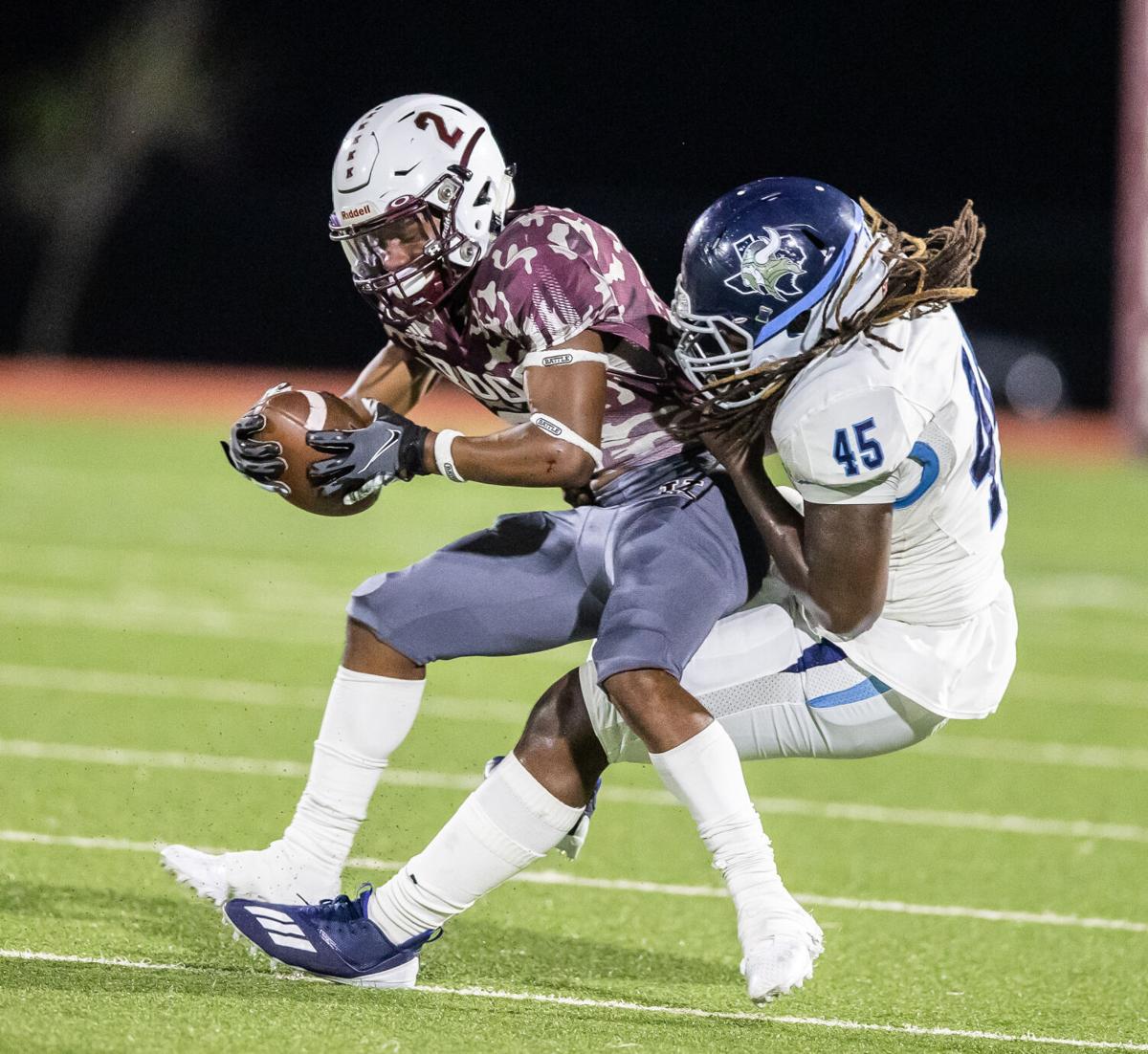 Killeen High's Lamarrion Cotton (29) runs for a first down after a catch as Bryan’s Du'wayne Paulhill (20) makes the tackle at Leo Buckley Stadium on Thursday, Oct. 14, 2021.

Bryan’s Isaiah Nutall (23) carries as a Killeen defender is tackling him at Leo Buckley Stadium on Thursday, Oct. 14, 2021.

Bryan's Tason Devault (6) breaks through as Killeen's Gregory Gant (8) and another defender are able to stop him at Leo Buckley Stadium on Thursday, Oct. 14, 2021.

Looking to avoid being winless in District 12-6A with only three weeks left in the regular season, Killeen saw an early lead evaporate as Bryan posted 21 unanswered points en route to a 30-14 victory at Leo Buckley Stadium on Thursday.

but could do nothing with it as Killeen forced the Vikings to punt away the possession.

The Kangaroos responded with an eight-play drive that stalled at Bryan’s 38-yard line where they turned the ball over on downs. Two plays later, however, Killeen delivered as senior linebacker Harrah Garner recovered a fumble and returned it 30 yards for a touchdown with 6 minutes, 11 seconds left in the first quarter.

The score held through the end of the period and deep into the second quarter before the Vikings concluded the half with an explosive outburst.

With 4:15 remaining in the period, Bryan (2-5, 2-2) embarked on a nine-play, 50-yard drive highlighted by a 7-yard, third-down conversion pass from Tate Allen to Hunter Vivaldi and punctuated by senior Du’wayne Paulhill’s 9-yard run into the end zone with 1:40 left.

Then, a mere 47 seconds later, the Vikings matched Killeen’s defensive score as sophomore Tyson Turner returned a fumble 45 yards for a touchdown, giving Bryan a 14-7 advantage it would take into halftime.

There were a combined seven punts and 11 penalties for 70 yards in the first half compared to just 221 total yards of offense.

Killeen attempted to open the second half with an onside kick, but it failed, and five plays later, the Vikings pushed their lead to 21-7 on Isaiah Nutall’s 2-yard carry with 10:19 remaining in the third quarter.

The Kangaroos cut into the deficit on the ensuing drive as Emory Arthur broke free for a 57-yard gain before Roderick Norman found Lamarrion Cotton for a 3-yard touchdown, but Killeen would not get any closer.

Bryan tacked on an 8-yard touchdown run from Allen in the final minute of the third quarter, and added the final two points on a safety by Nic Caraway in the fourth quarter.

The Kangaroos were held to just 194 yards as Norman completed six of 14 passes for 75 yards, and Arthur carried the ball five times for a team-high 59 yards.

The Kangaroos must immediately turn their attention toward the most difficult stretch of their schedule, facing three of the district’s top four teams to conclude the regular season, beginning with Harker Heights.

The Knights entered the week with the district’s top offense, averaging 51.5 points and 502.3 yards behind a collection of talented playmakers.

Harker Heights (5-1, 2-1) has proven vulnerable against the pass, though, allowing a district-worst 205.7 yards per game, and as one of four district teams to already amass 1,000 passing yards, the Kangaroos are capable of attacking the weakness.

But the matchup is not flawless.

Roderick has more interceptions (5) than passing touchdowns (3), and despite its ranking in the category, the Knights already have 10 interceptions and have broken up 22 passes.

Killeen closes the regular season by hosting Temple (4-2, 3-0) and traveling to Belton (3-3, 2-1). The defending champion Wildcats place their 11-game district winning streak on the line against the Tigers tonight.

Some things have changed a lot during the last year. District 12-6A cross country is not one of them.