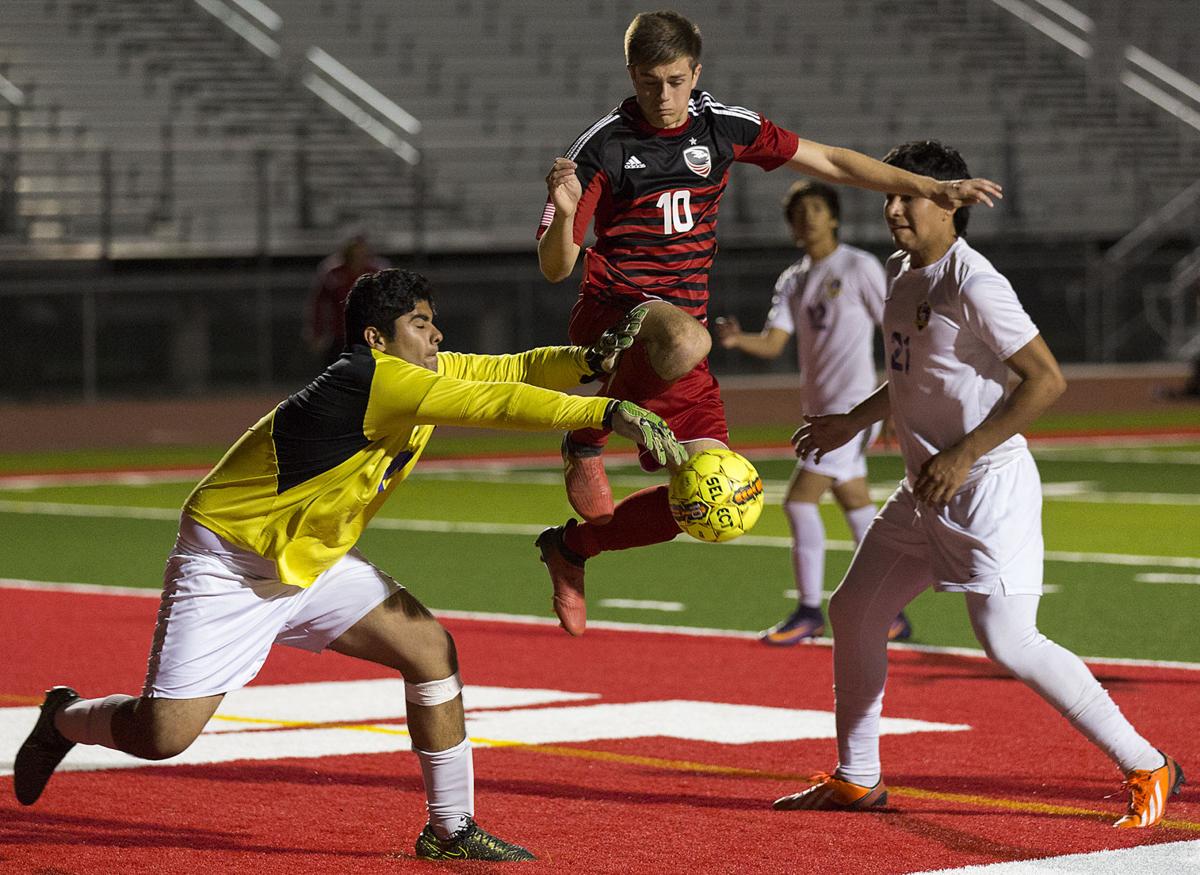 Salado’s Constantinos Loullis (10) leaps between La Grange goalkeeper Jose Lopez-Ocon and Julio Ramirez (21) to make a play for the ball Thursday in Manor. Salado won 3-0 to advance to the second round of the Class 4A playoffs. 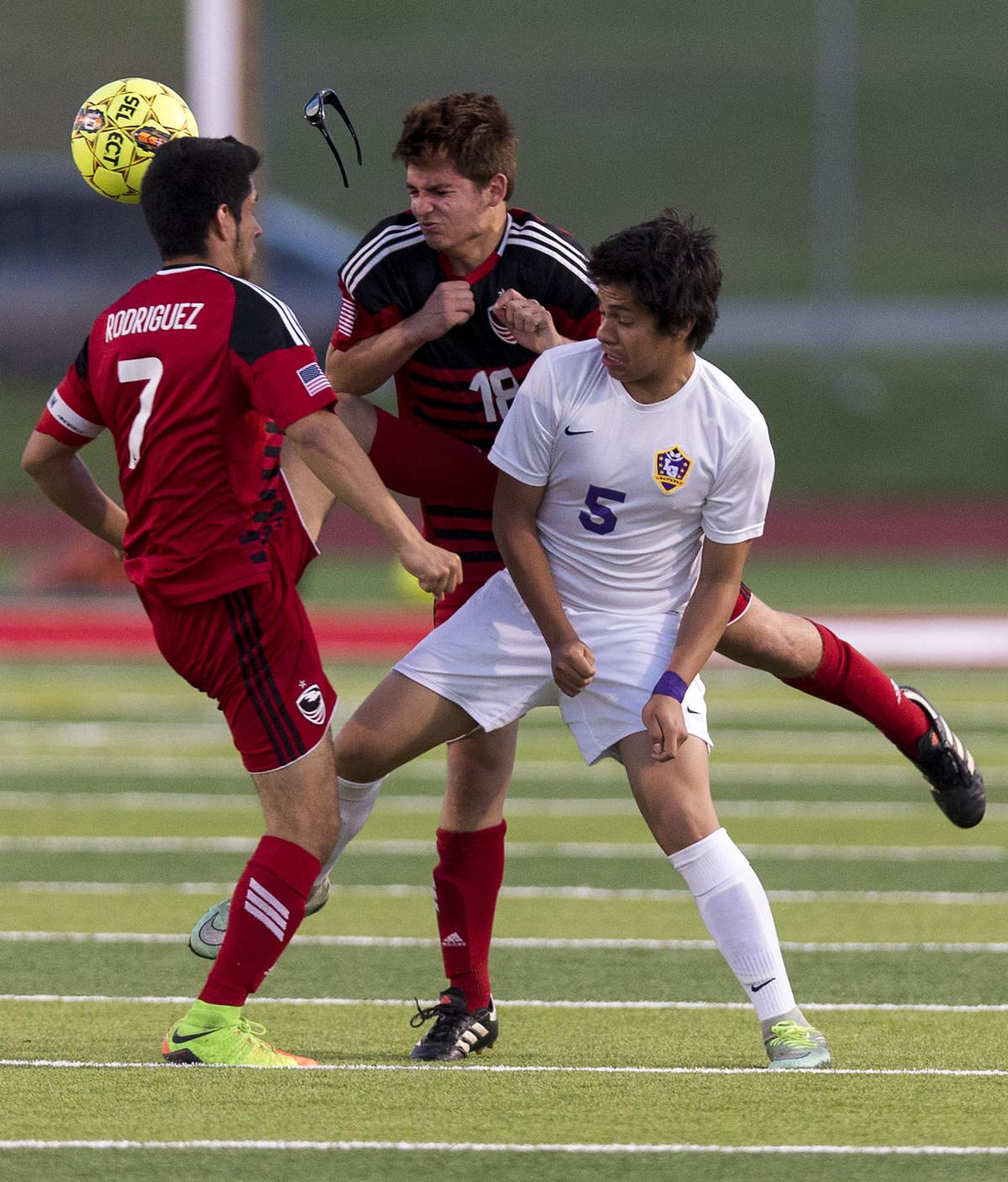 Salado's Jack Spradlin loses his glasses while challenging for the ball with the help of teammate Brandon Rodriguez (7) against La Grange's Alberto Estrada on Thursday in Manor.

Salado’s Constantinos Loullis (10) leaps between La Grange goalkeeper Jose Lopez-Ocon and Julio Ramirez (21) to make a play for the ball Thursday in Manor. Salado won 3-0 to advance to the second round of the Class 4A playoffs.

Salado's Jack Spradlin loses his glasses while challenging for the ball with the help of teammate Brandon Rodriguez (7) against La Grange's Alberto Estrada on Thursday in Manor.

MANOR — Salado boys and girls soccer coach Michael Goos will be busy again next week, but he’s just fine with that.

The Salado boys continued their defensive dominance this season by pitching their 15th shutout on a windy Thursday night at Manor ISD Stadium, and they joined the Lady Eagles in the second round after blanking La Grange 3-0 in the Class 4A bi-district playoffs.

The Salado boys and girls, who beat Taylor 5-0 in the first game in Manor on Thursday, face Canyon Lake in the area round next week.

The Eagles have reached the area playoffs in all six years of the program’s existence but have never advanced past the second round.

“We moved the ball well. We wanted to keep possession, and we did that,” Goos said. “We knew (La Grange) would put a lot of balls through, and we were ready for it. (La Grange) is a fast, physical team, so for us to come out and win the way we did shows how great we played.”

Salado junior forward Constantinos Loullis put the Eagles (22-2) ahead 1-0 in the first 10 minutes of play with a score off a shot attempt from teammate Kaden Smien.

“(Smien) put up a really good shot and the keeper just couldn’t hold onto it and gave up a rebound,” Goos said. “Constantinos did exactly what he needed to do and got the rebound. He was in the right place at the right time.”

Smien got another scoring opportunity in the 14th minute and made that one count. He received a lofted pass from Camden LaCanne on the left sideline and headed the ball into the center of the net for a 2-0 lead.

“We were making a backside run, and the ball got hit all the way back to the opposite side,” Smien said, breaking down the scoring play. “Camden LaCanne just put up this amazing ball and all I had to do was touch it with my head. Shout-out to Camden right there.”

Salado’s Manuel Tonchez tallied the final goal late in the second half on a rebound after La Grange goalie Jose Lopez blocked a shot from Loullis.

Salado junior goalie Trey Sheppard was most active in the final 15 minutes when La Grange (7-11-2) went on the offensive to try to muster a late rally. The Leopards created several scoring opportunities during that time frame, including a couple of corner kicks.

But La Grange never found the back of the net.

“What really helps me is our defense and how we stay organized all the time,” Sheppard said. “If you noticed, (La Grange) kept getting offsides on every ball they tried to put through. That’s what our back forwards try to do. They stay organized together, and they talk very well.

“For me, every time we score first or score early it always puts the pressure off me. I don’t have to worry as much and can just play my game.”

Despite the lack off success in the second round, Smien said the Eagles aren’t taking a different approach into next week’s match.

“We focus on each game one at a time,” Smien said. “Now that we’re past the first round we can focus on that second round.”

And Salado can direct that focus to finally getting the area-round monkey off its back.

GATESVILLE — Both Salado and Gatesville have excellent soccer programs, and they showed why on Monday.