Temple’s Quentin Johnston watches his shot fall for a basket over Shoemaker’s Henri Vizcarrondo (33) on Friday in Temple. 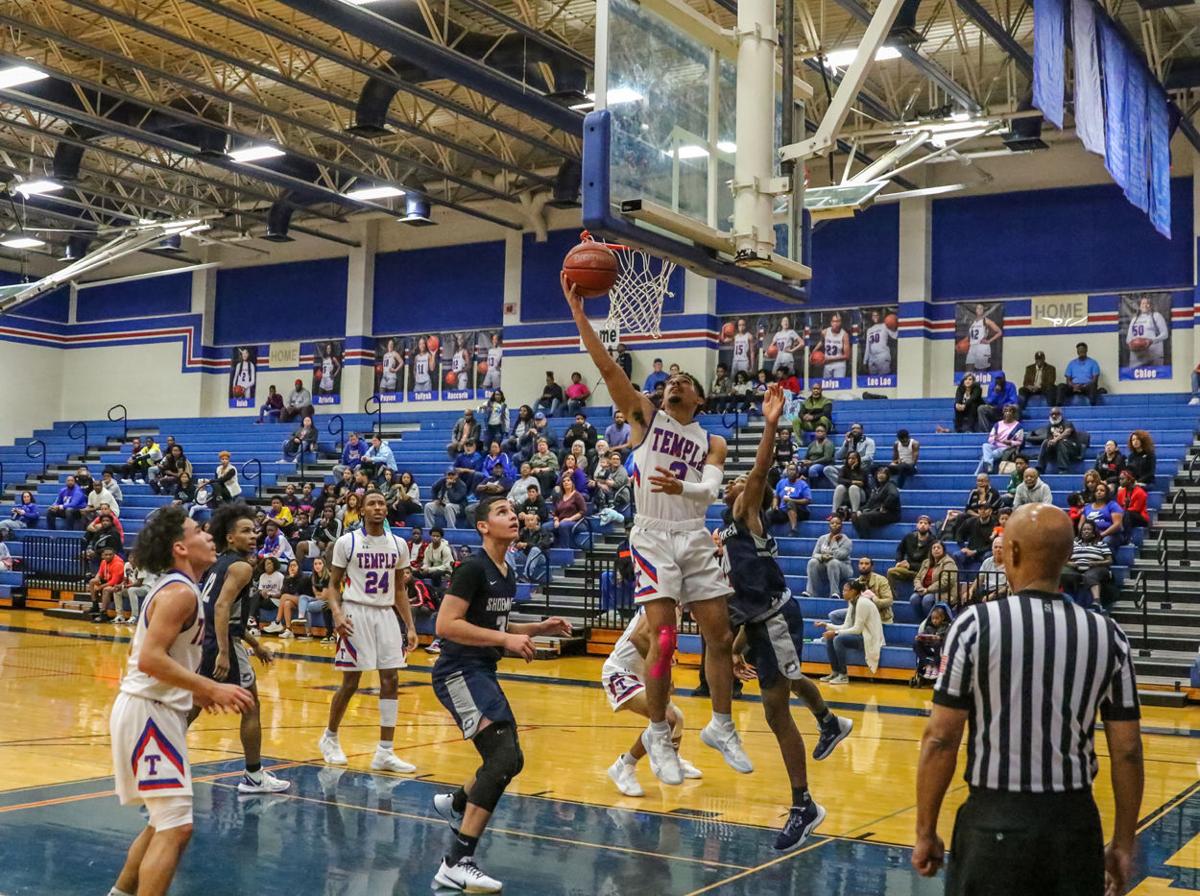 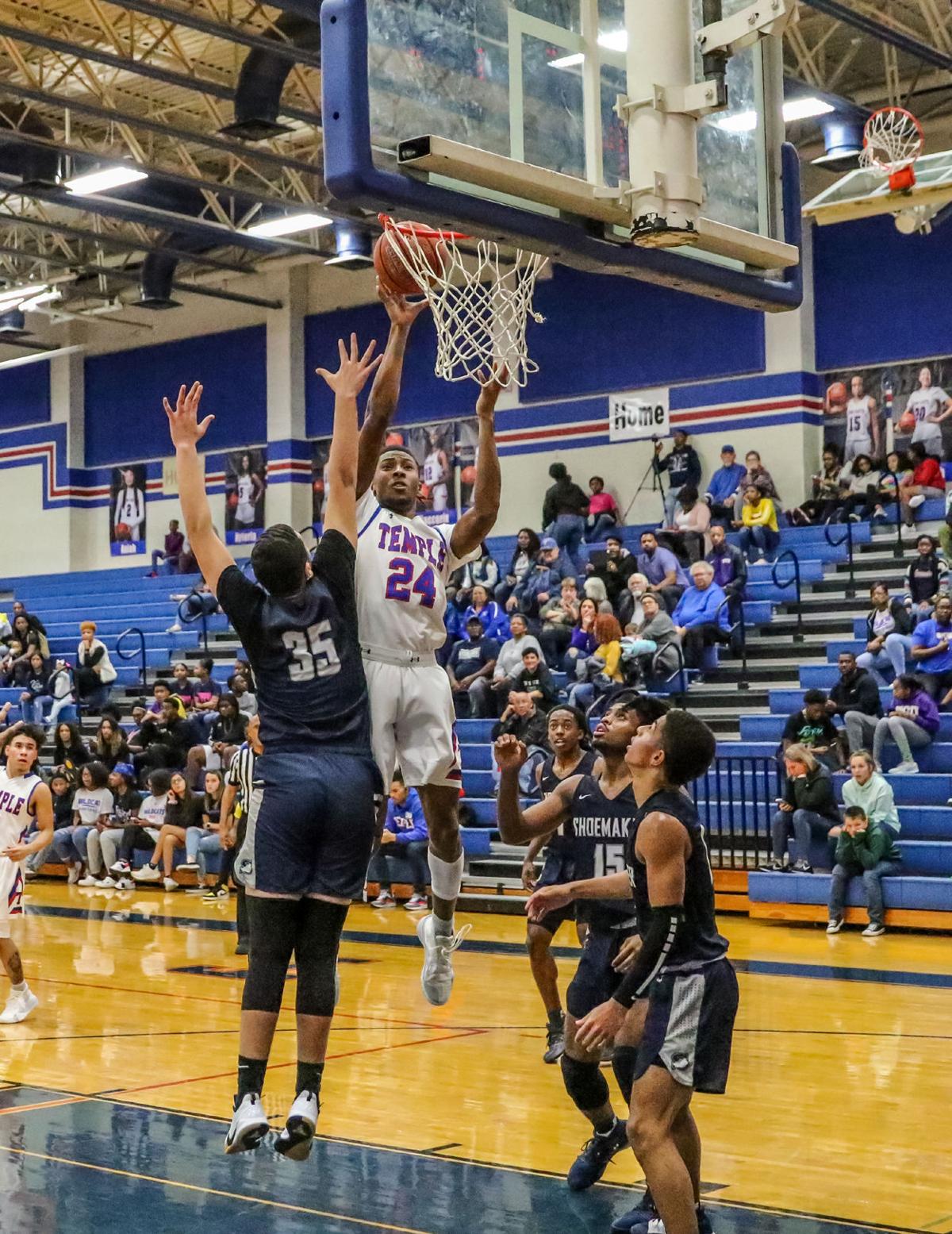 Temple’s Quentin Johnston watches his shot fall for a basket over Shoemaker’s Henri Vizcarrondo (33) on Friday in Temple.

TEMPLE — Temple head coach Michael Thomas will make sure to remind just about everybody any chance he gets that each victory is important and never to be taken lightly.

So, naturally, file Friday night’s 63-50 win over Killeen Shoemaker to close out the first half of District 12-6A in that category. Though, the timing of the Wildcats’ fifth league triumph — one more than all of last season — added, if possible, a morsel more significance. After all, it followed a disappointing defeat Tuesday to Harker Heights and left Temple (18-5, 5-3) alone in third place halfway through league play.

“Tonight, we knew we had to come out and end the first round of district with a win,” said Temple’s Jaiden Pate, who had nine points. “We came out with a lot of energy at the start. We kind of slacked a little bit but picked it back up. We just all knew it was a big game and a win we needed after the upset loss we had Tuesday.”

Damond Daniels delivered 17 points and Nasir Kirk had 11 for Shoemaker (12-14, 4-4), which dropped into a fourth-place tie with Belton.

“Like I say all the time, all the wins are important. We were fortunate to get the win tonight against a good opponent,” Thomas said. “It’s crucial. We are trying to get into those playoffs any way we can.

The Wildcats on Friday were up by just three, 34-31, with about 3 minutes to play in the third quarter when the combination of starters and role players put together a 9-0 run to close the period, and the Wildcats never looked back.

After Smith made a 3-pointer and a layup to put Temple up 39-31, reserves Rico Troup and Carlos Torres combined on a crowd-pleasing sequence. Troup fed Torres under the basket with a no-look pass and Torres easily made the layup for Temple’s first double-digit advantage. Torres’ next bucket put the Wildcats up 43-31, where it stood entering the fourth.

Torres finished with six points and Troup had four.

“We’re going to call them the ‘Bench Mob,’” Thomas said. “The guys came off the bench with energy. That’s what we’ve been preaching. Everybody has to contribute. Whether its 2 minutes, 1 minute, we have to do it together.”

Five straight points from the Grey Wolves cut their deficit to 45-38 with 4:53 to go in the fourth. Temple went back up by 10 after a pair of Johnston free throws, scored six in a row to increase the lead to 57-43 with 1:20 left and kept the Grey Wolves at bay the rest of the way.

“I’m just pleased about the mental aspect. We’ve definitely gotten better,” Thomas said. “It’s a testament to the work these men have put in.”

Temple led 14-7 after the first quarter and 27-22 at the break. Shoemaker caught the Wildcats at 29-all with Kirk’s layup at the 5:35 mark of the third. But after Herivan Cotto-Figueroa’s bucket made it 34-31, the Grey Wolves never got closer.

“Like I said, we’re fortunate. We’re not going to take anything for granted,” Thomas said.

With eight games down, the second half of 12-6A starts next Friday for Temple, which will make the short trip to face rival Belton. The Wildcats won the first encounter 71-43.

Tigers pull away in 4th quarter to beat Knights 58-46, move into 4th-place tie