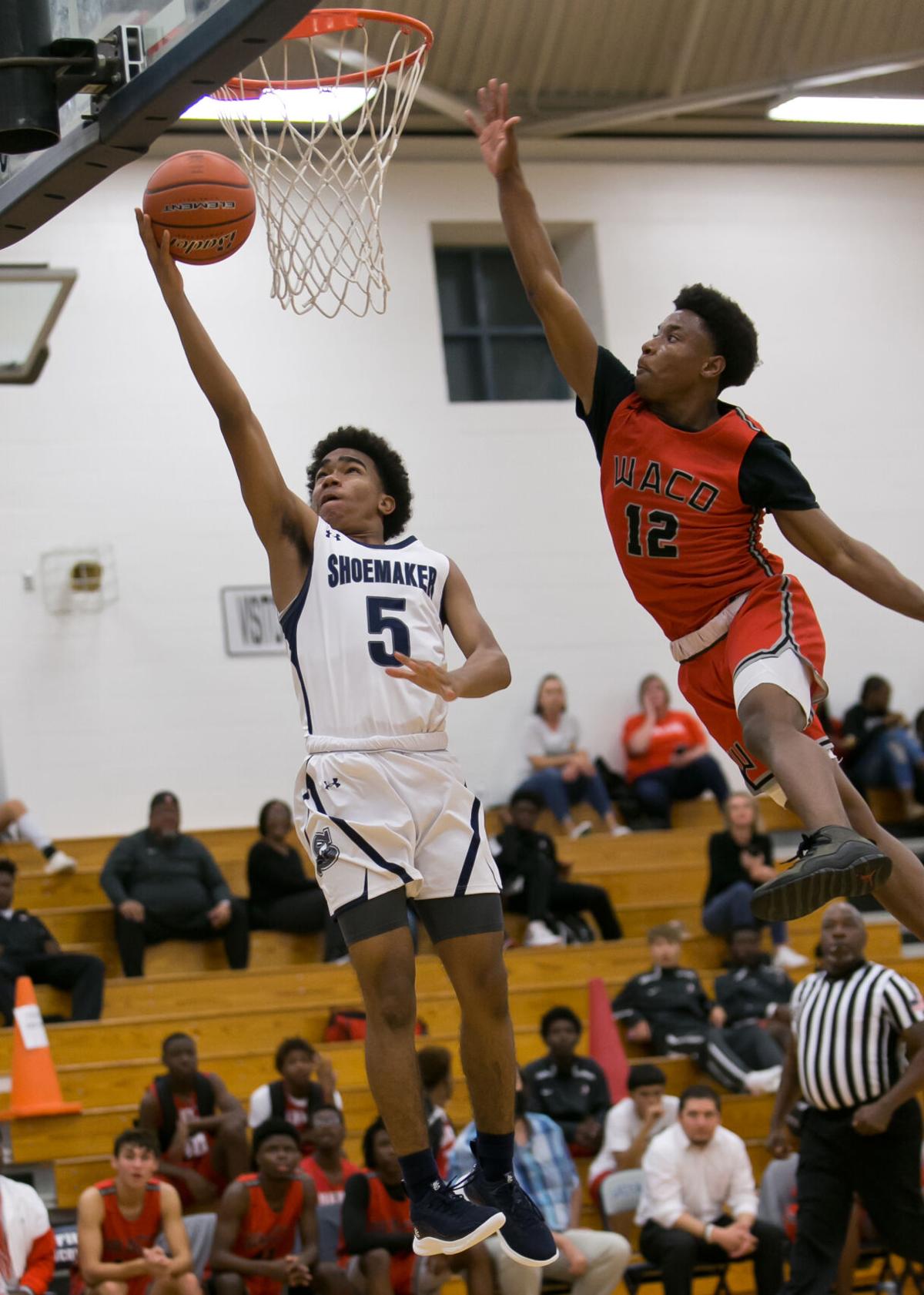 Shoemaker's Jezreal Dejesus Vargas (5) drives to the basket for two after stealing the ball from Waco High on Friday at Shoemaker High School. 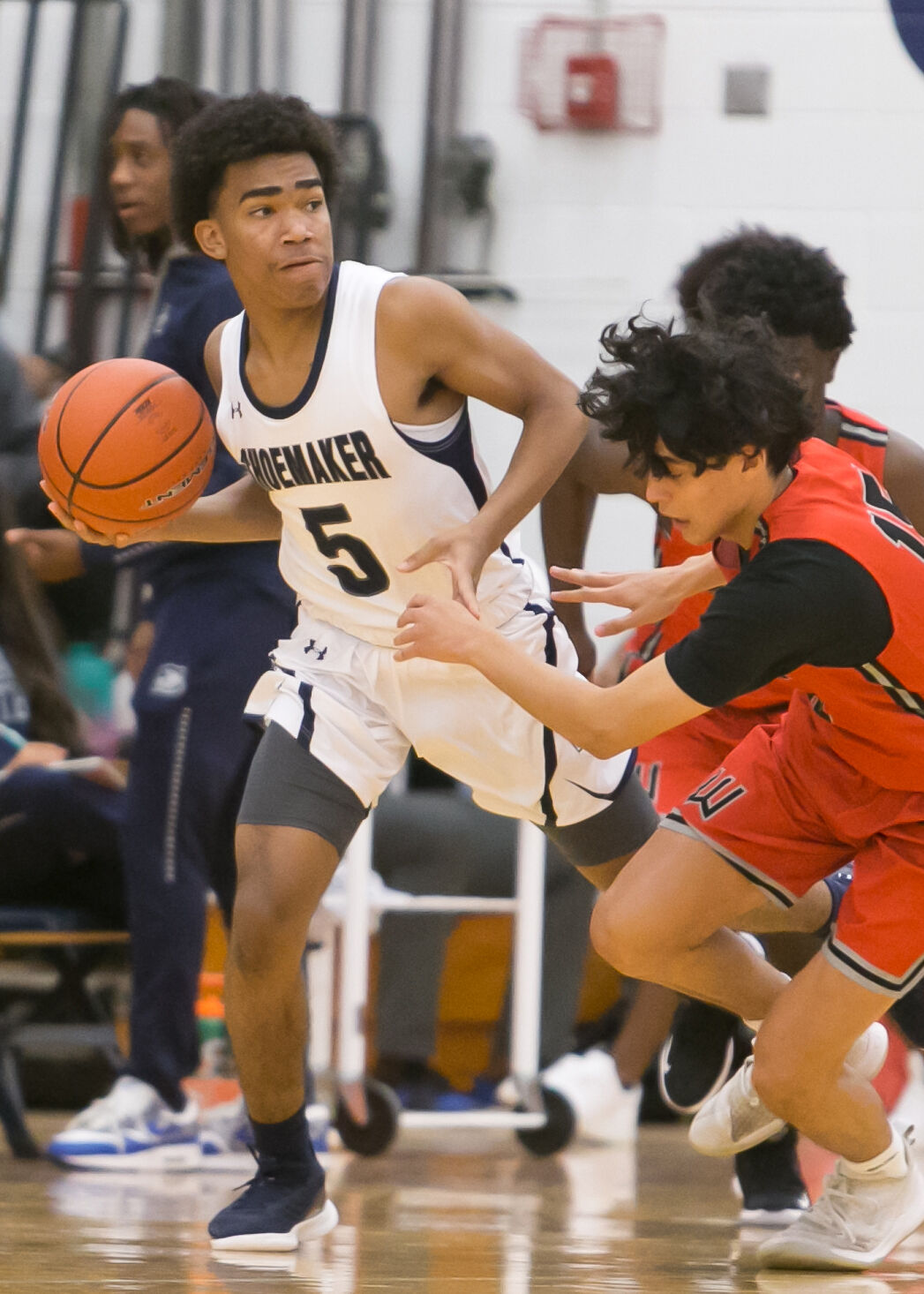 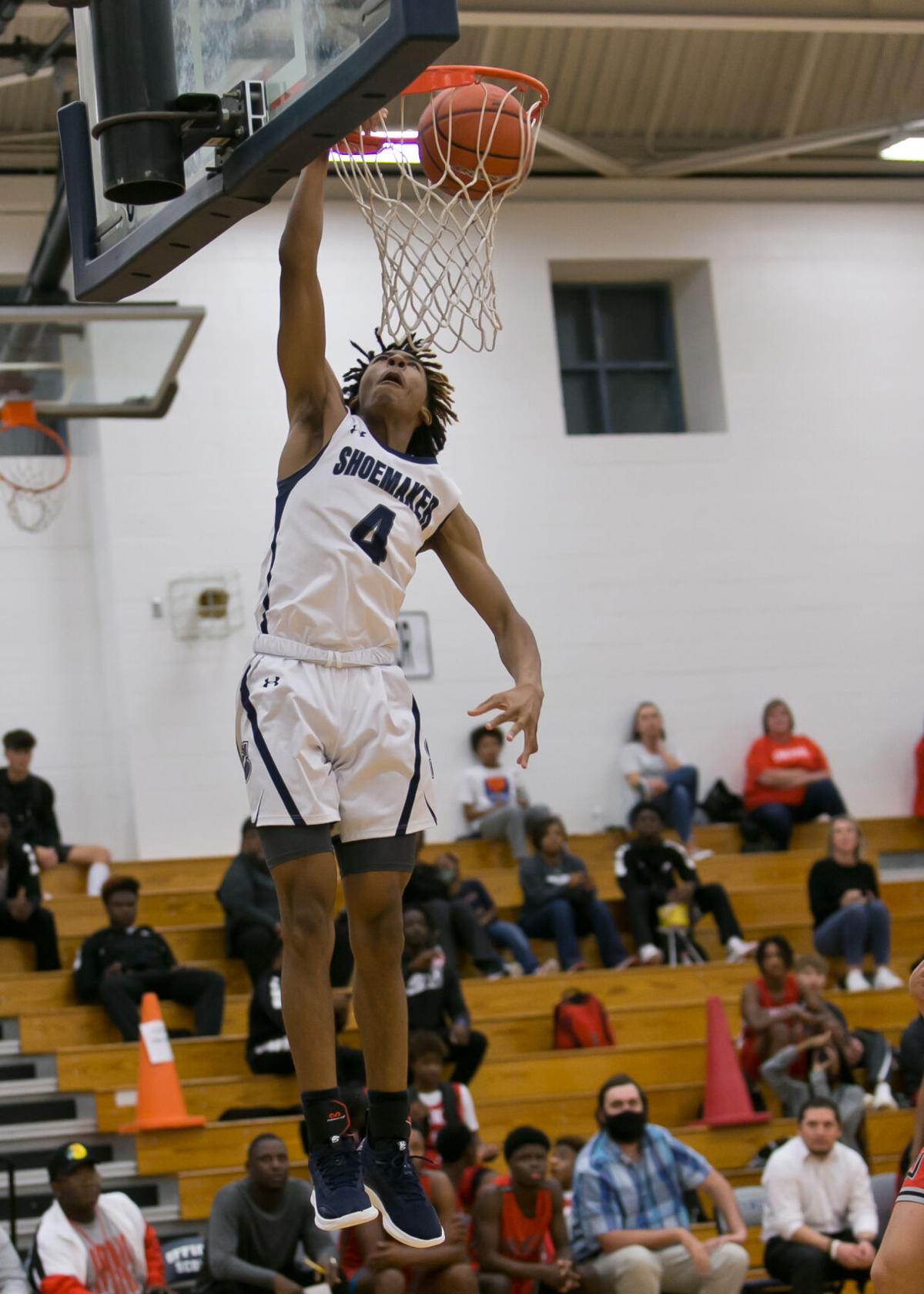 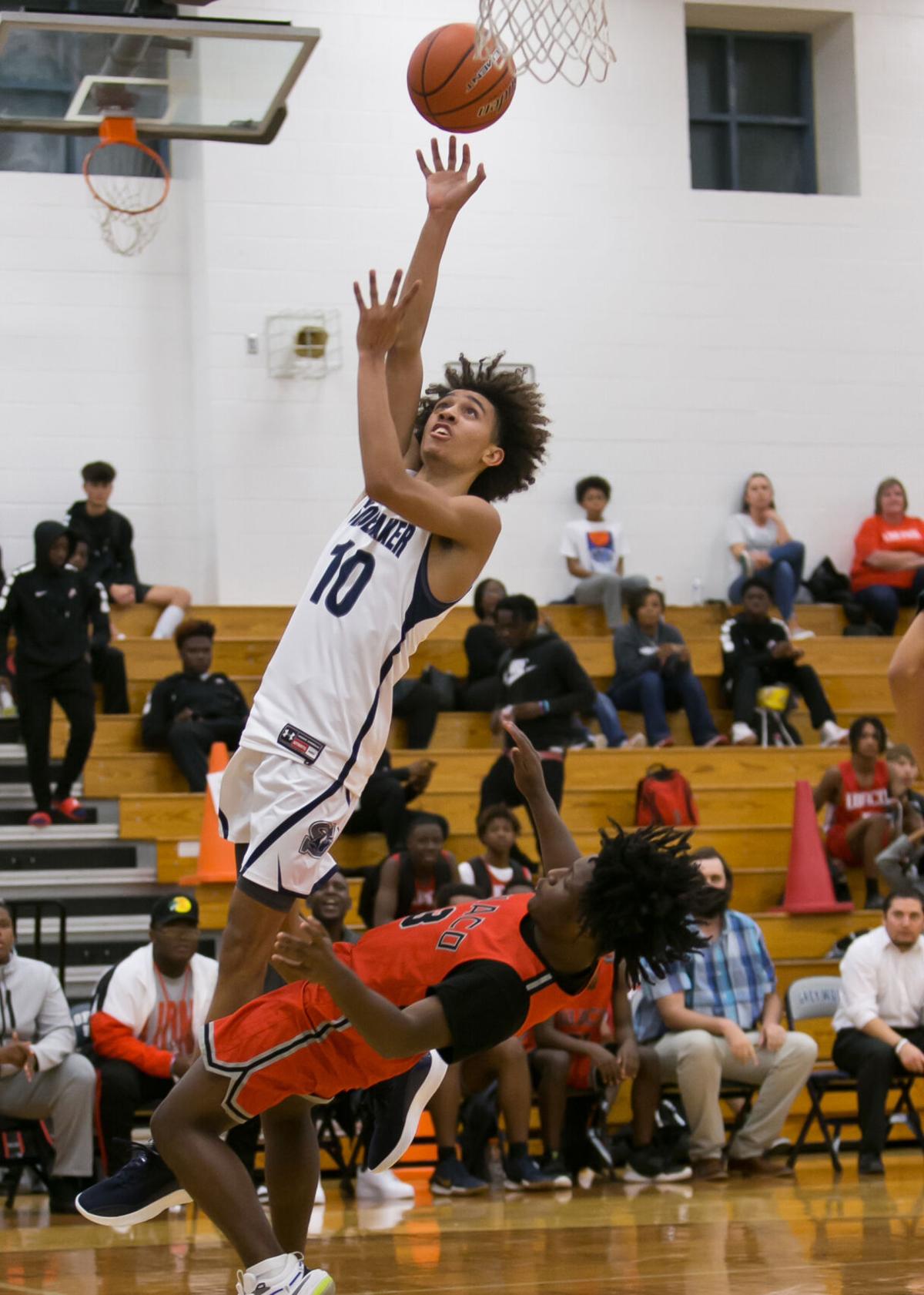 Shoemaker's James Brown-Petterson (10) drives to the basket and draws a foul against Waco High's Jay Robinson (3) on Friday at Shoemaker High School. 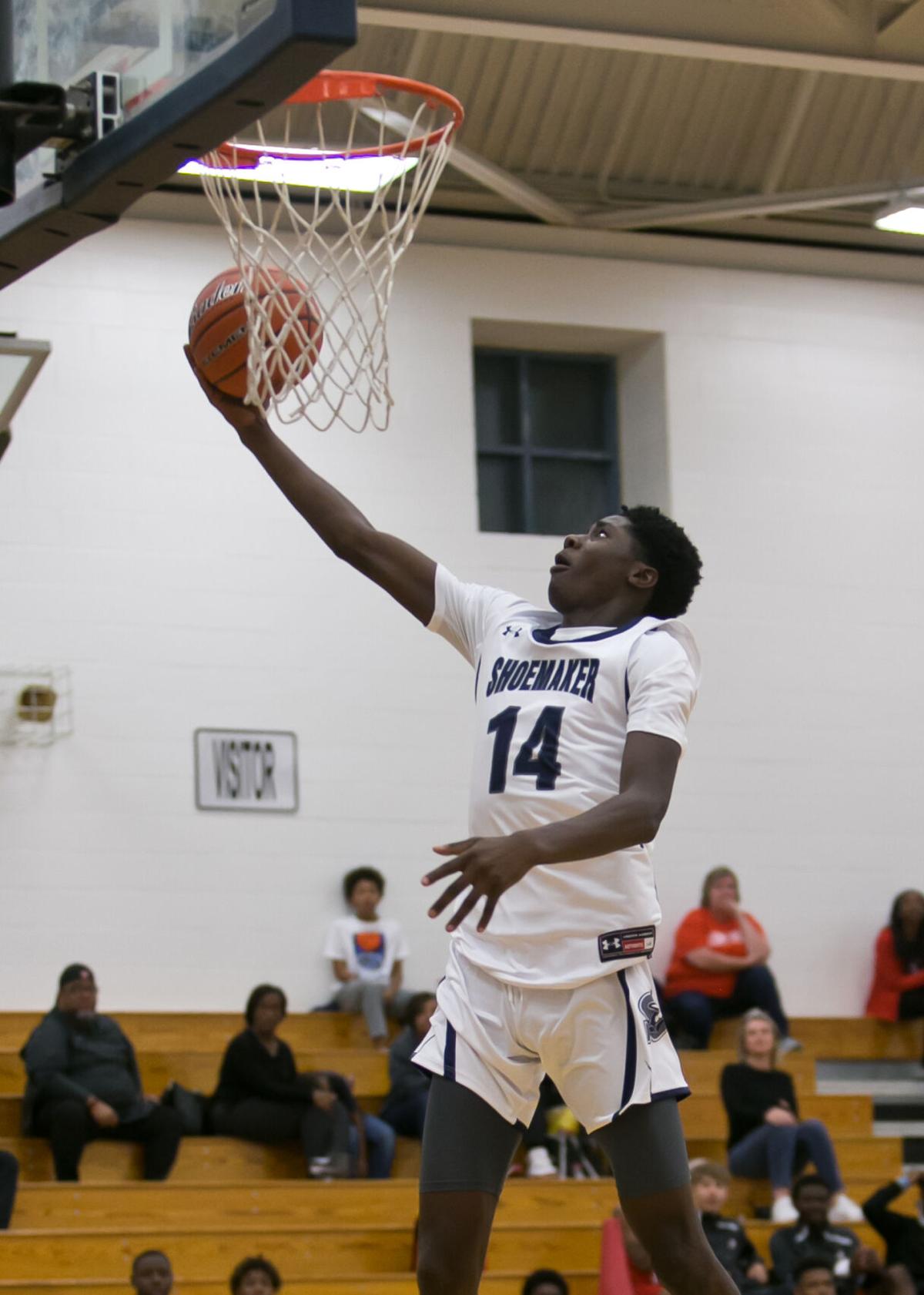 Shoemaker's Ladamon Williams (14) drives to the basket for two against Waco High on Friday at Shoemaker High School. 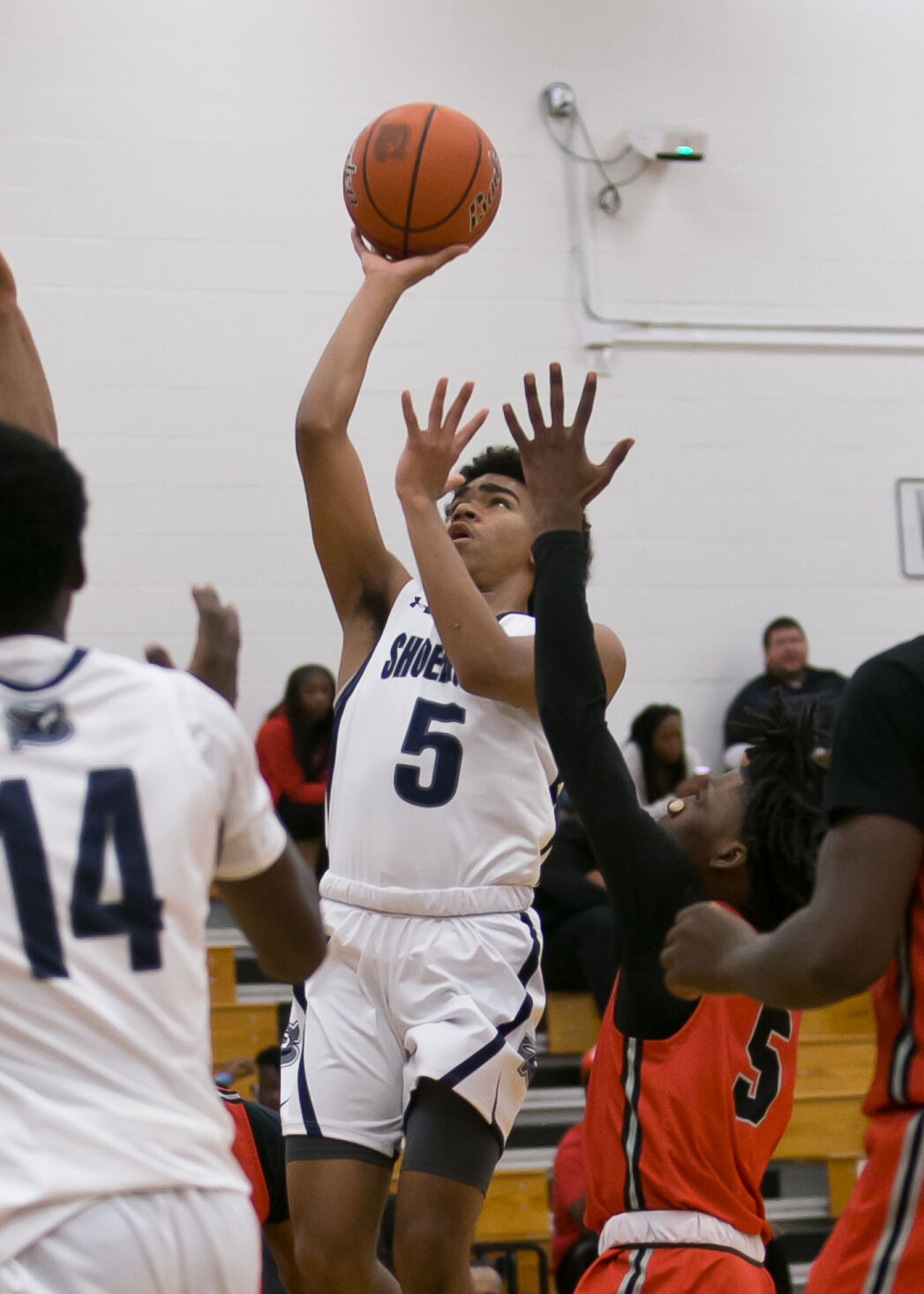 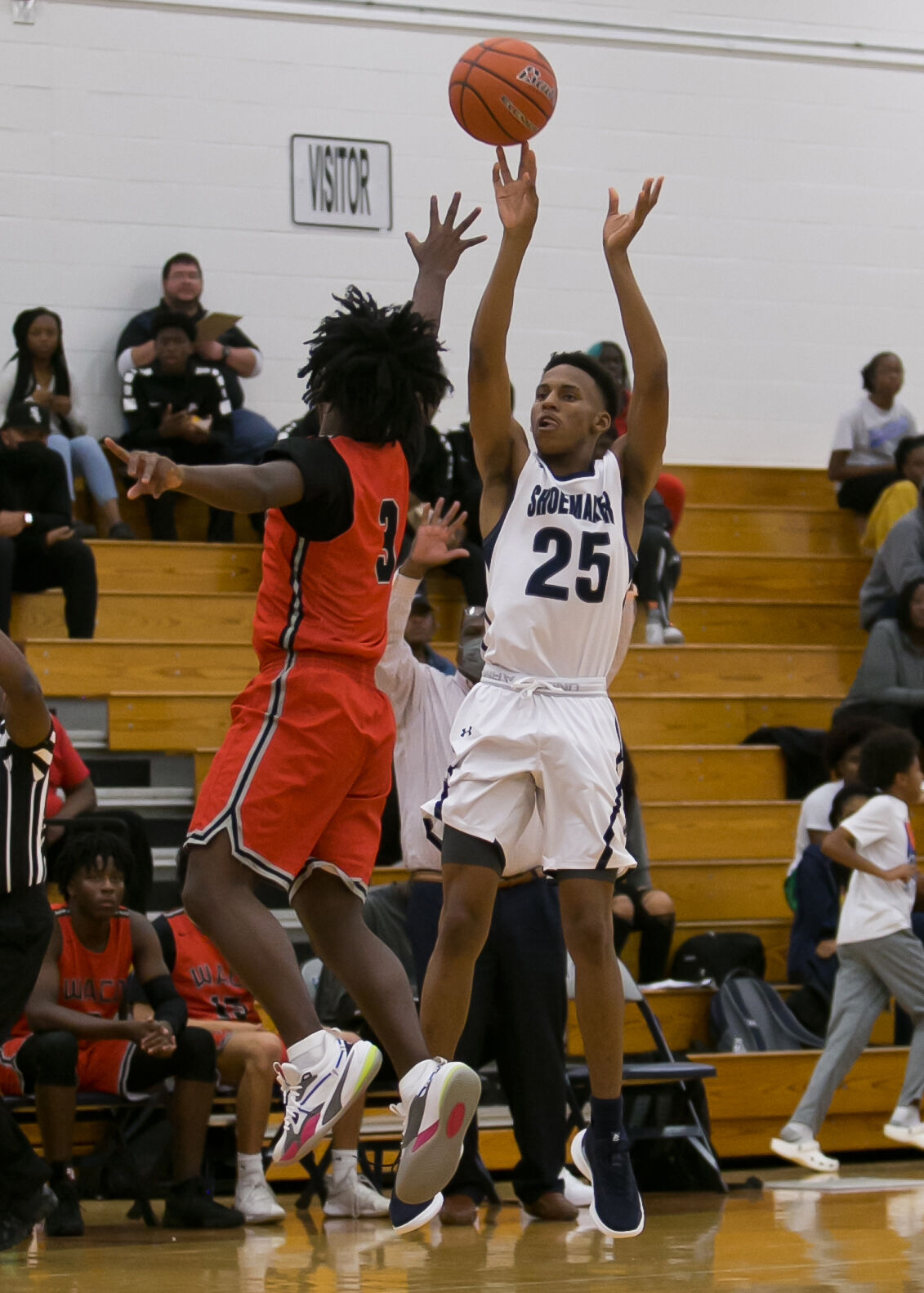 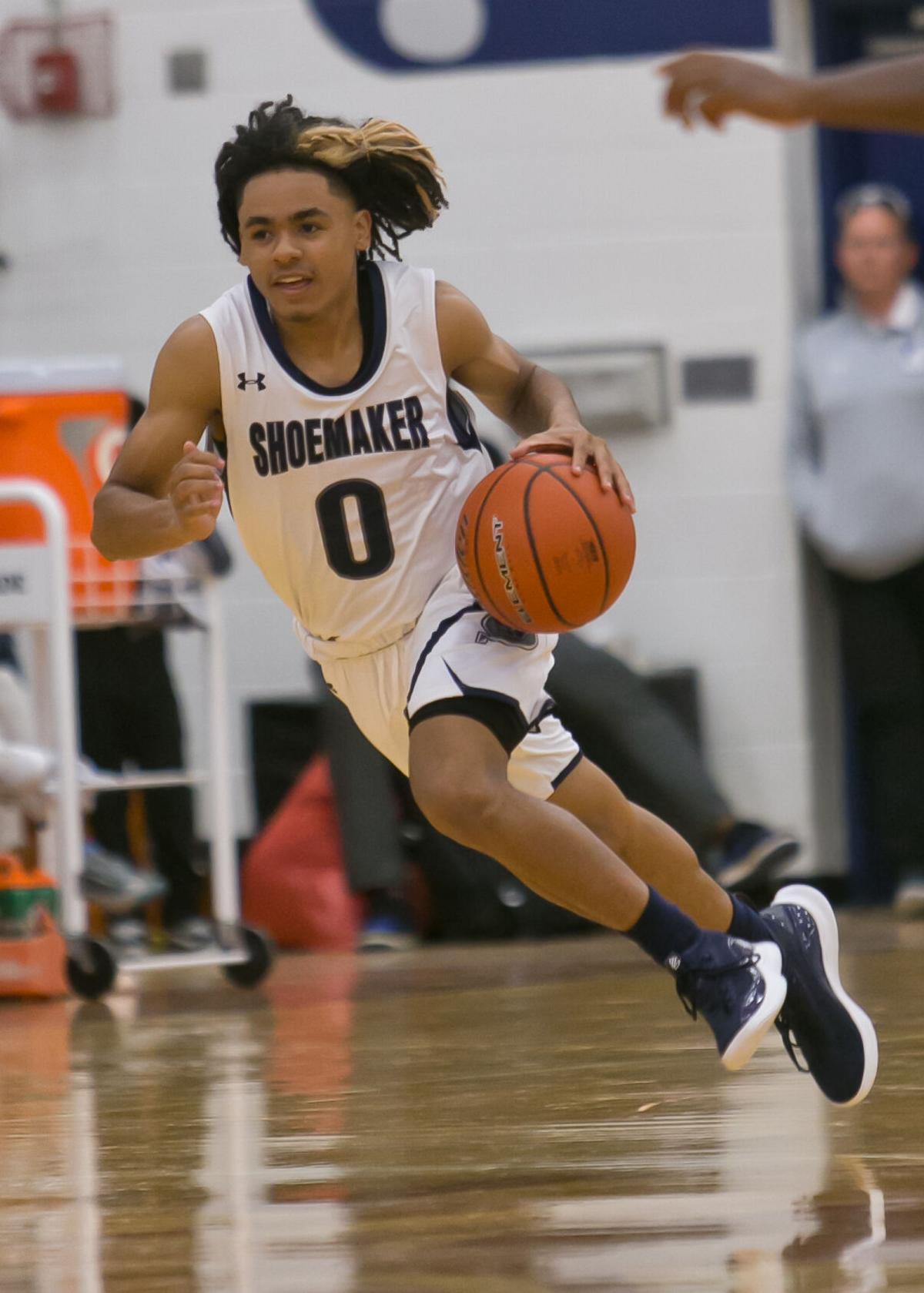 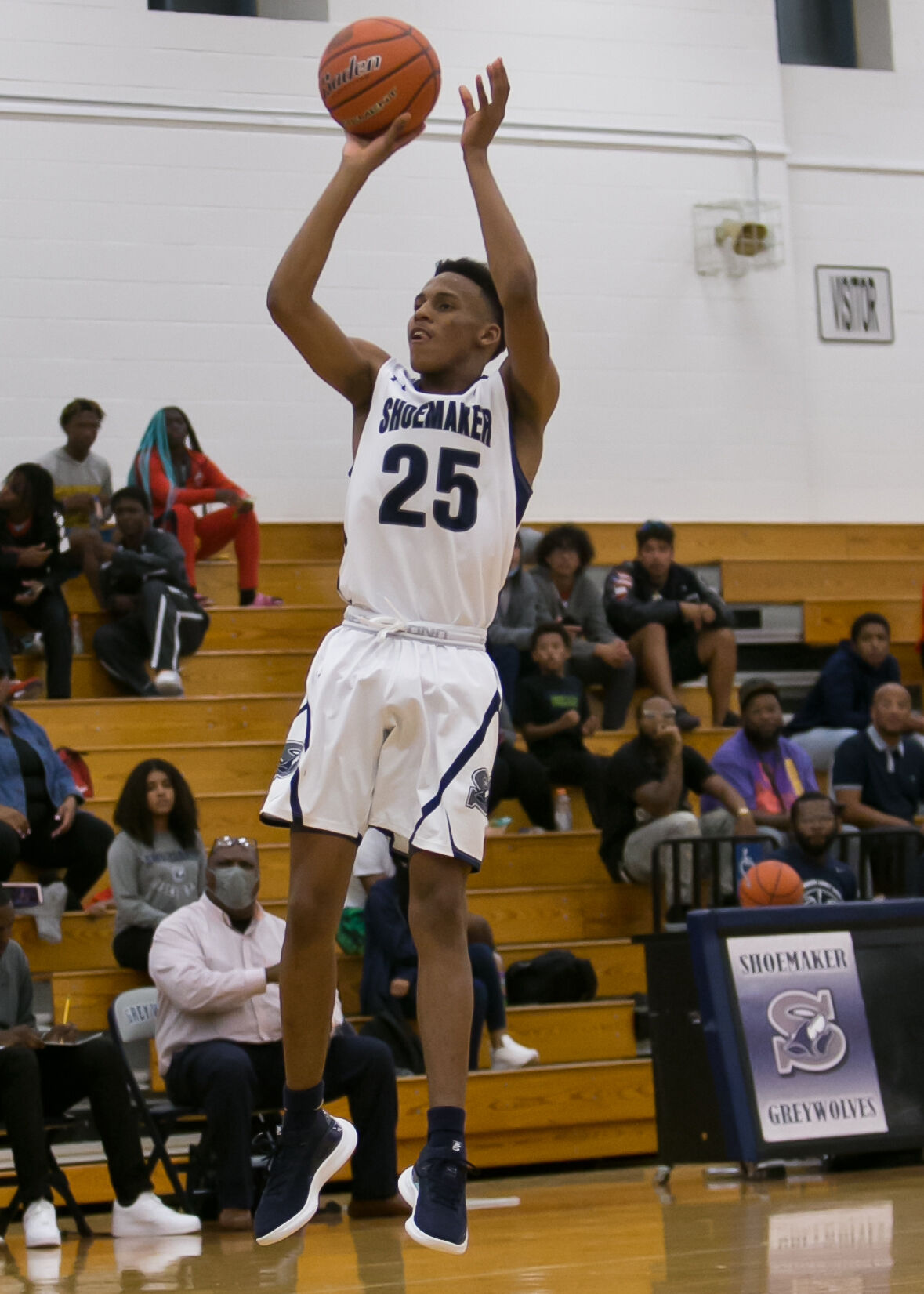 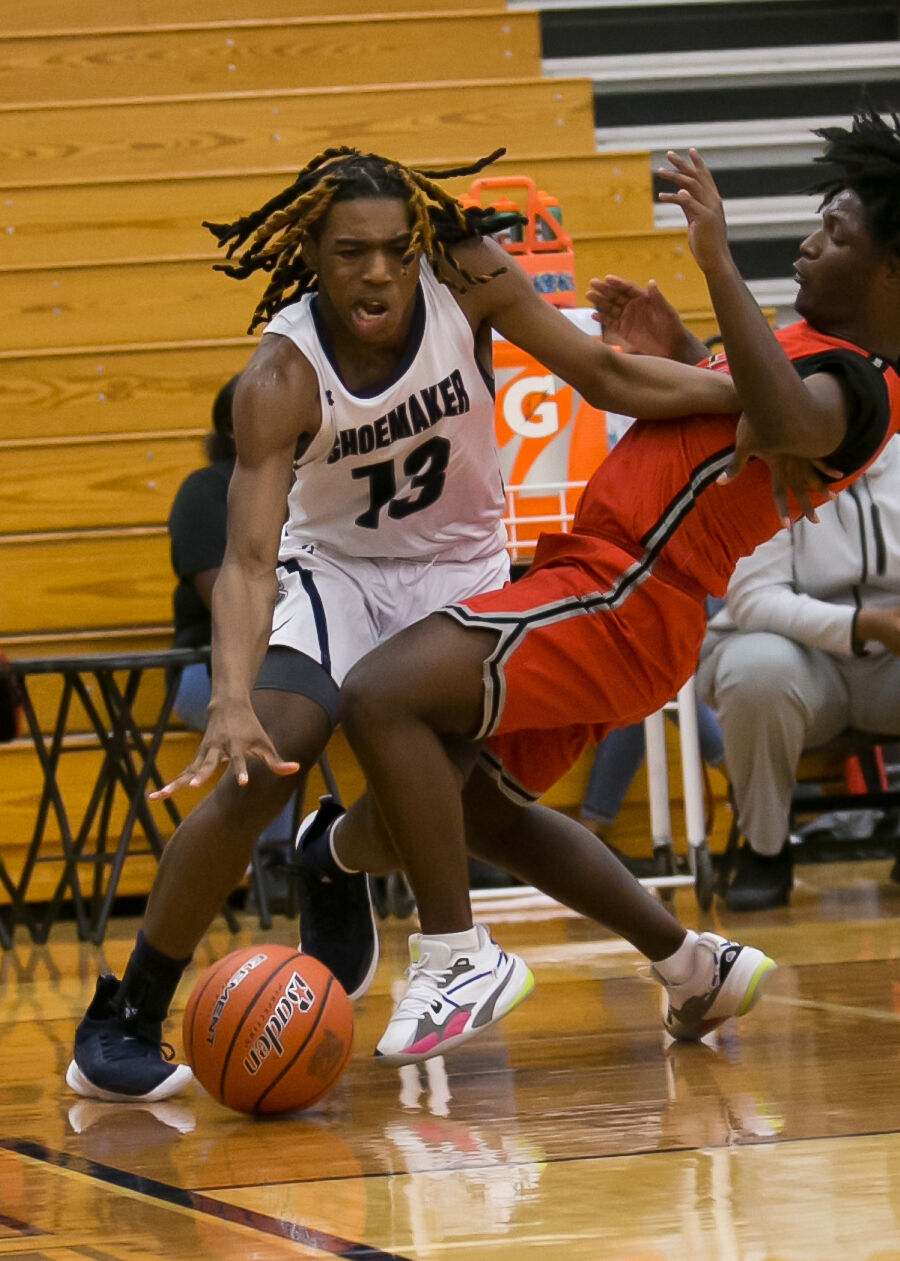 Shoemaker's Jezreal Dejesus Vargas (5) drives to the basket for two after stealing the ball from Waco High on Friday at Shoemaker High School.

Shoemaker's James Brown-Petterson (10) drives to the basket and draws a foul against Waco High's Jay Robinson (3) on Friday at Shoemaker High School.

Shoemaker's Ladamon Williams (14) drives to the basket for two against Waco High on Friday at Shoemaker High School.

Jezreal DeJesus Vargas and Antwone Gonzales proved too much for Waco to handle Friday night on the hardwood as the Shoemaker Grey Wolves pulled away for an 88-65 win Friday evening in Killeen.

DeJesus Vargas and Gonzales combined for 23 points in the fourth quarter, fueling the Grey Wolves, who stretched a nine-point lead into the 23-point win.

Heading into the quarter, Shoemaker held a 59-50 lead after Waco fought back into the game thanks to a barrage of three-pointers.

In the final quarter, the Grey Wolves ramped up the defensive pressure, forcing several Lion turnovers that led to wide-open looks from three-point range for Gonzales and DeJesus Vargas, who added some uncontested layups.

“We try to dictate tempo,” said head coach Karron Taylor. “I’m a firm believer in any sport you play, you find out where your advantages and disadvantages are.

“And the way I look at it, is that you can create the advantages by speeding up numbers — four versus three, five versus two, and whatnot — then you’ll give yourself a better opportunity to get the shots off.”

James Brown-Petterson, Jaiyon Williams and Dyrayvian Starling each added points for the Grey Wolves in the decisive quarter.

DeJesus Vargas led all scorers with 32 points, and Gonzales dropped in 11 points.

Taylor said after the game that he was proud of how the team, which is a younger squad, has worked together to build cohesion.

“One thing I love is that they’re bringing energy every day in practice,” Taylor said. “They’re boding well, building chemistry as a team. They enjoy being around each other. It’s a good environment.”

It wasn’t always pretty for the Grey Wolves in the game, however. As Taylor noticed, the team needs to work specifically on rebounding.

“If we continue to grow in the next three, four days, and watch some video, learn things we need to get better at — especially rebounding — I think we’ll be OK,” Taylor said. “We got to make sure we go out and play every quarter. It will cut down on some of those burdens that we had those mental lapses.”

The Grey Wolves also left Waco shooters open on several consecutive possessions in the second quarter as the Lions cut its deficit to five points at halftime, and in the third quarter as it chipped into yet another big Shoemaker lead.

It was a bit how Taylor expected the game might go, however.

“We’ve kind of been up and down in the last couple of practices — even in our scrimmages,” he said. “Sometimes we show spurts of greatness on both sides of the ball, and then sometimes we show what we call inexperience.”

Vizcarrondo also finished with eight rebounds and a pair of blocks.

Also scoring points for Shoemaker were Starling, who scored six points, and Jaylen Spence and Isacc Hawthorne, who each scored two points.

The 1-0 Grey Wolves travel next to Pflugerville to take on the Weiss Wolves.

Tourney MVP Kai Chester scored 14 points and DeSoto handed Shoemaker its first loss of the season, 63-58, on Nov. 20 in the semifinals of the …