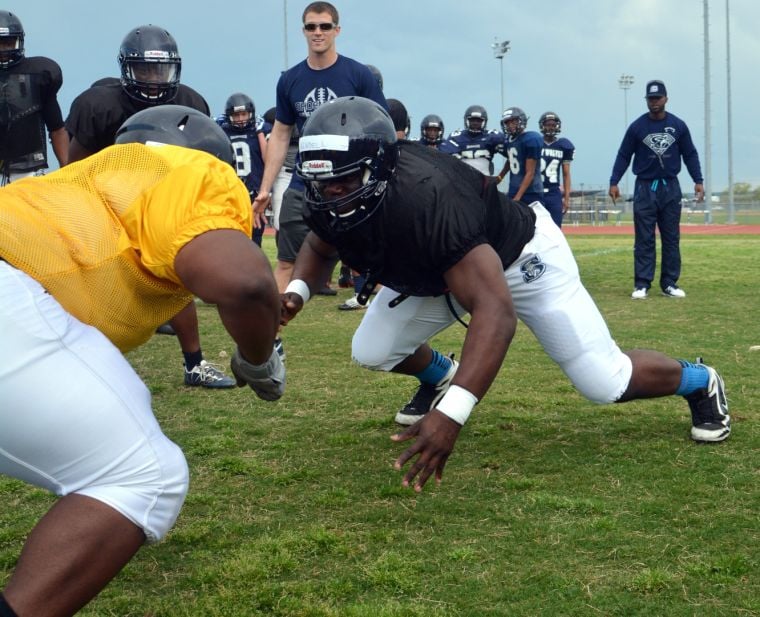 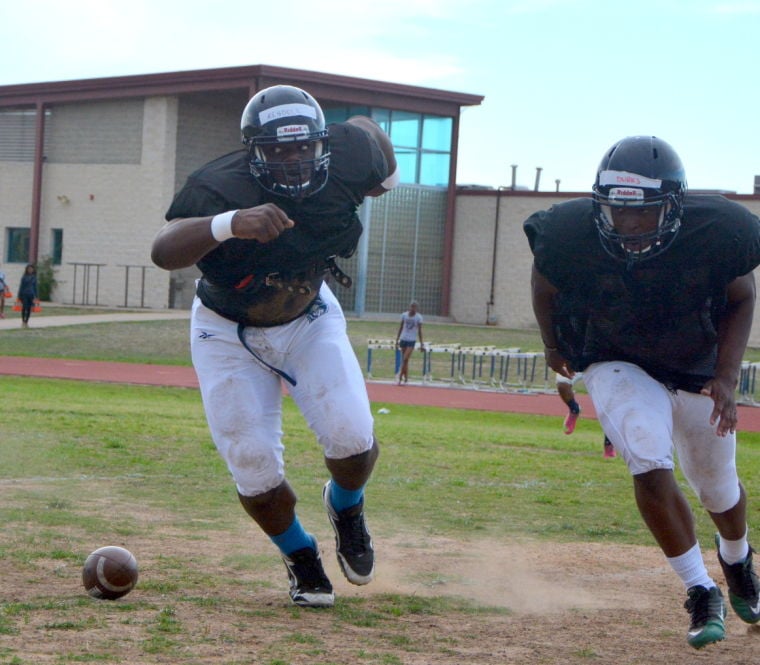 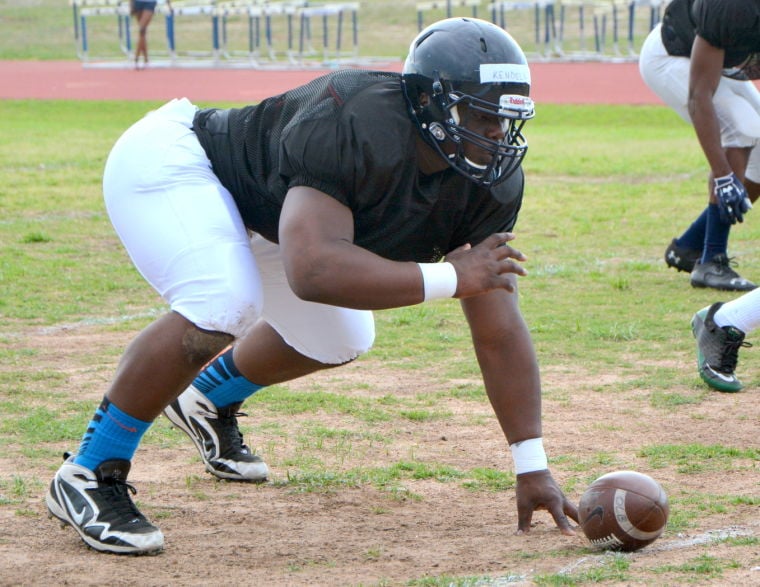 Shoemaker defensive lineman Kendell Jones lines up on the ball during the Grey Wolves’ opening day of spring football on Monday at Shoemaker. 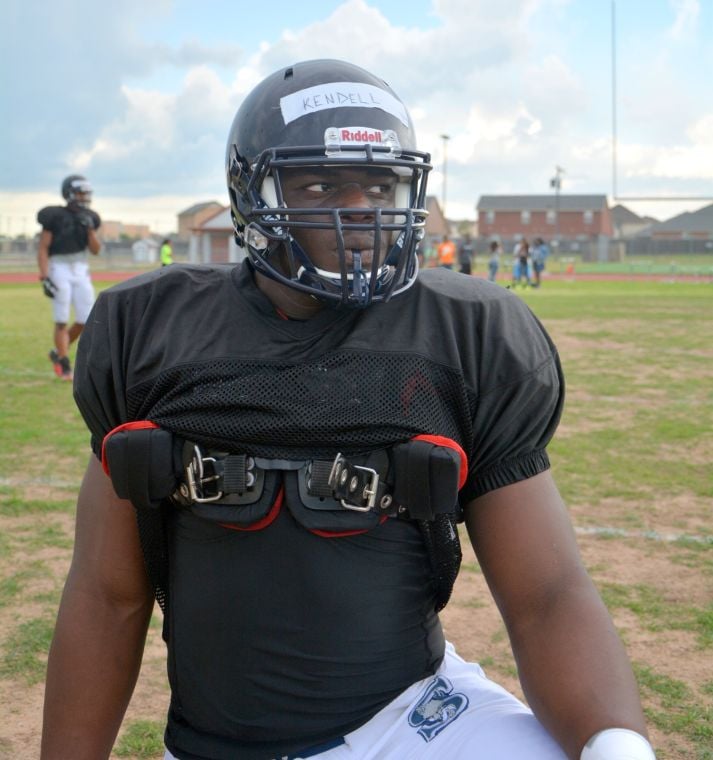 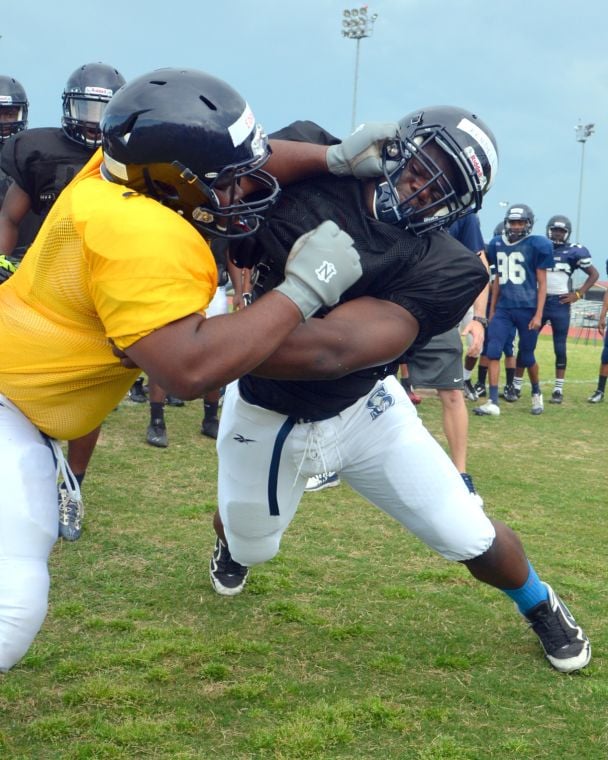 Shoemaker defensive lineman Kendell Jones lines up on the ball during the Grey Wolves’ opening day of spring football on Monday at Shoemaker.

Kendell Jones was always the biggest kid in his class growing up. But now he’s emerging as one of the biggest guys in another class.

The Shoemaker defensive tackle emerged as a force for the Grey Wolves in 2013 and is gaining traction in the recruiting world. And he’s just coming into his junior season this fall.

Jones’ summer plans include traveling, but his destinations include cities like Tuscaloosa, Ala., and Baton Rouge, La. Those may not be glamorous cities, unless you are talking about college football.

Jones will showcase his skills for some of the biggest programs in the country this summer in hopes of getting some buzz going and increasing his name in the college recruiting circles.

Jones established himself as a force on the Grey Wolves defensive line in 2013.

He was named the District 8-5A Defensive Newcomer of the Year after finishing the regular season with 15 tackles, including seven for loss and a sack.

More importantly, he helped the Grey Wolves finish third in district and make it to the playoffs for the second time since the school opened in 2000.

Now he’s looking to help Shoemaker take the next step.

“I’m stepping in to make sure I lead this team to where we want to be,” Jones said. “I want to be seen, I want to be noticed, have a good life and succeed.”

Jones’ numbers are impressive for a defensive tackle, whose primary job is to take up opposing blocks and wreak havoc in the middle so linebackers can move in for tackles.

But the most impressive numbers come in the weight room.

Jones attended the University of Texas summer camp where he was measured at 6-foot-6, 317 pounds.

Despite his summer itinerary, Jones is still focused on making his current team better. His first step is competing in the Killeen ISD 7-on-7 League Lineman Challenge.

“We’re going to put in a lot of work to become the best in the nation, all of us combined,” Jones said.

Rivals.com, a prestigious recruiting site owned by Yahoo!, has yet to rate Jones, but shows him having offers from Arkansas, Baylor, Oklahoma, Texas, Texas A&M, Arkansas State and Houston.

Jones said he doesn’t plan on making a commitment until the end of his junior year. And like many kids around this football-crazed state, he has dreams of playing on the big stage.

“Right now, I’m looking into academics,” Jones said. “Now I want to see sports getting better. That would assure that I will go to the NFL within two or three years of my college career.”

Jones appears to be the latest in a line of star defensive linemen to come out of Killeen ISD.

Jacksonville Jaguars defensive tackle Roy Miller was a Rivals four-star recruit when he graduated from Shoemaker in 2005. He went on to play for Mack Brown and Texas where he was a part of the 2005 BCS National Championship team and was named Fiesta Bowl Defensive MVP three years later.

Ellison legend Tommie Harris Jr. went on to win the Lombardi Award at Oklahoma in 2003 before going to the NFL where he played eight total seasons for the Chicago Bears and San Diego Chargers. Harris helped the Bears make it to Super Bowl XLI.

Jones is three inches taller and 13 pounds bigger than Harris was as a senior.