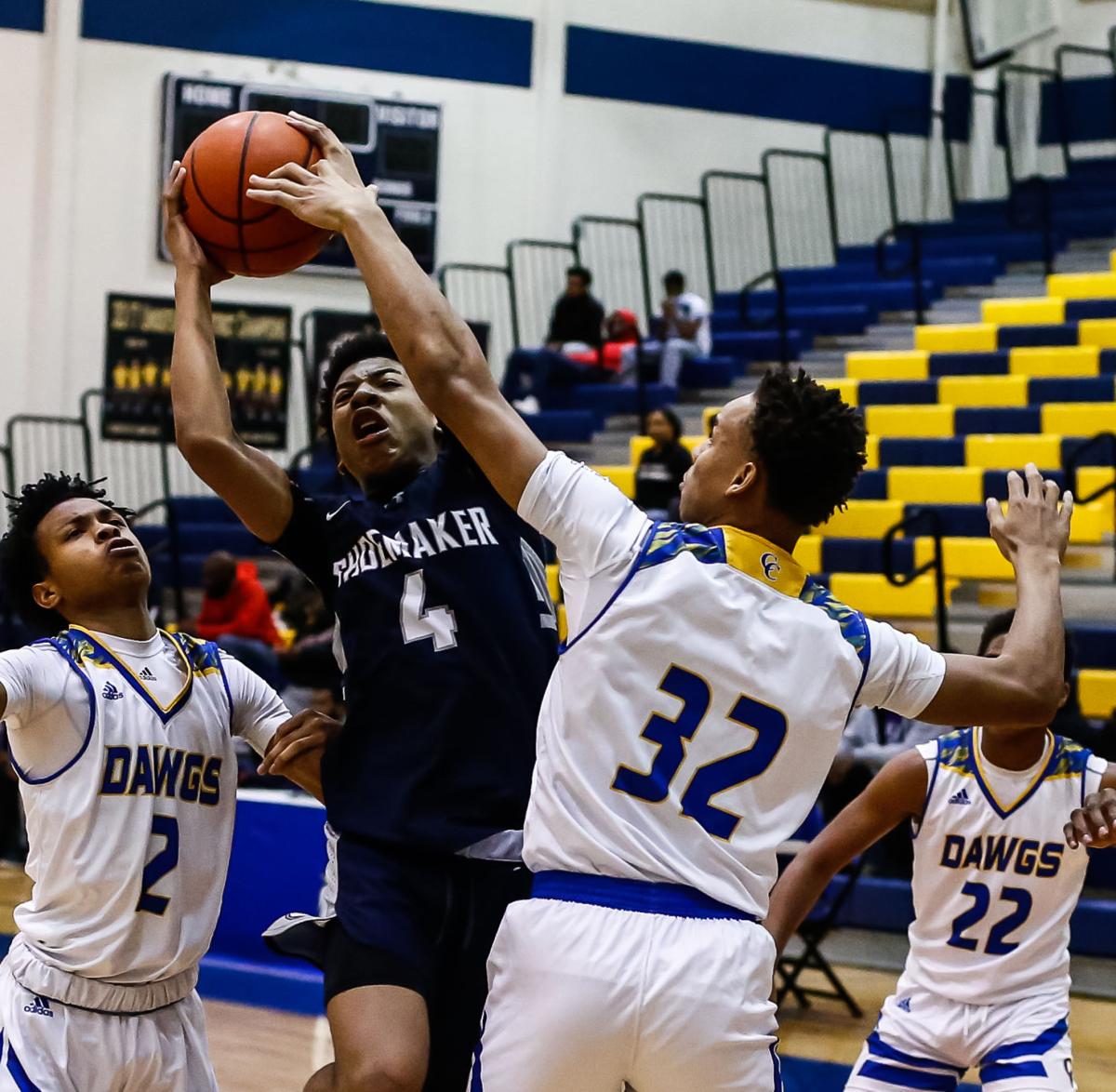 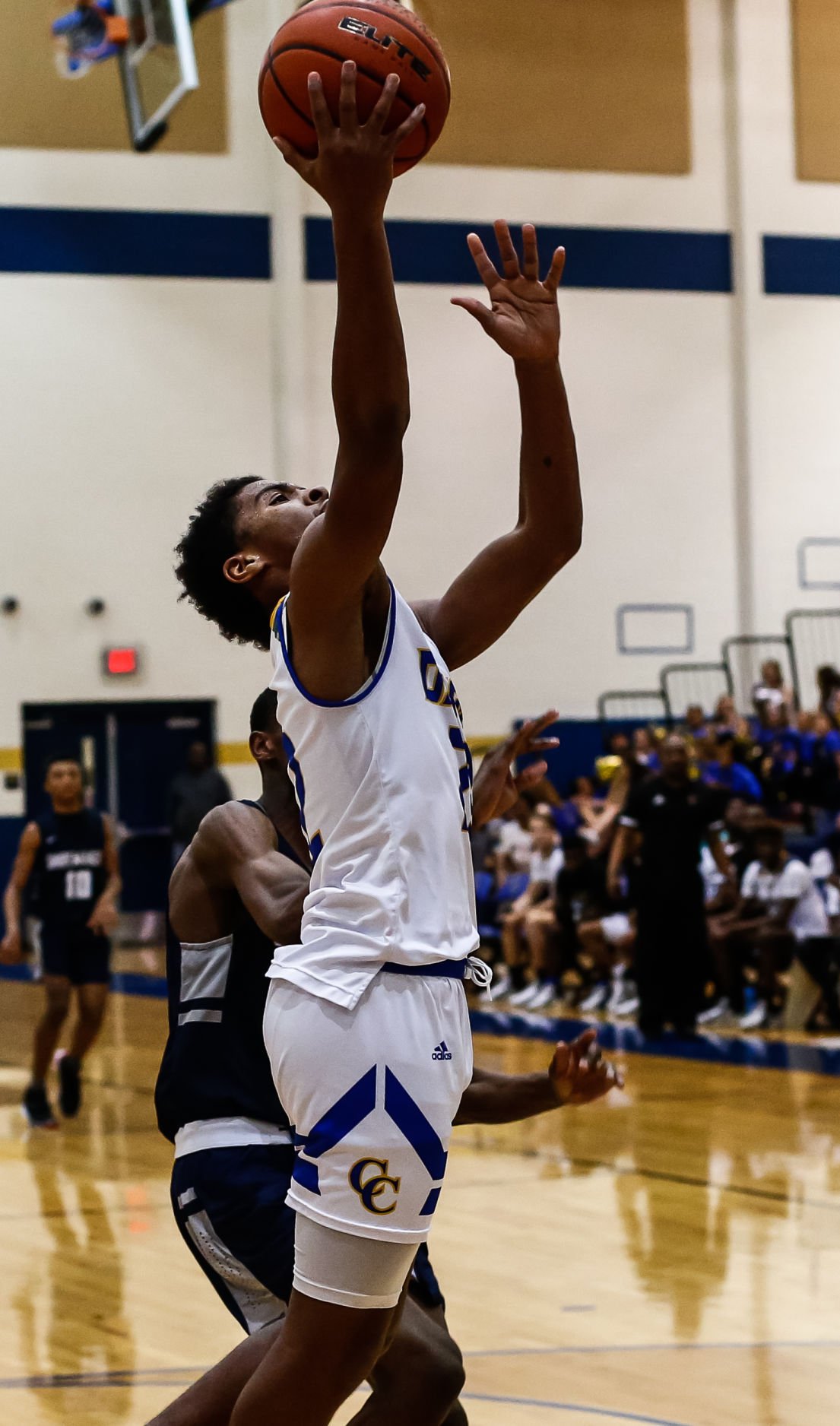 Copperas Cove's Warren Fleming (22) shoots with a Shoemaker defender at his side Friday at Copperas Cove, 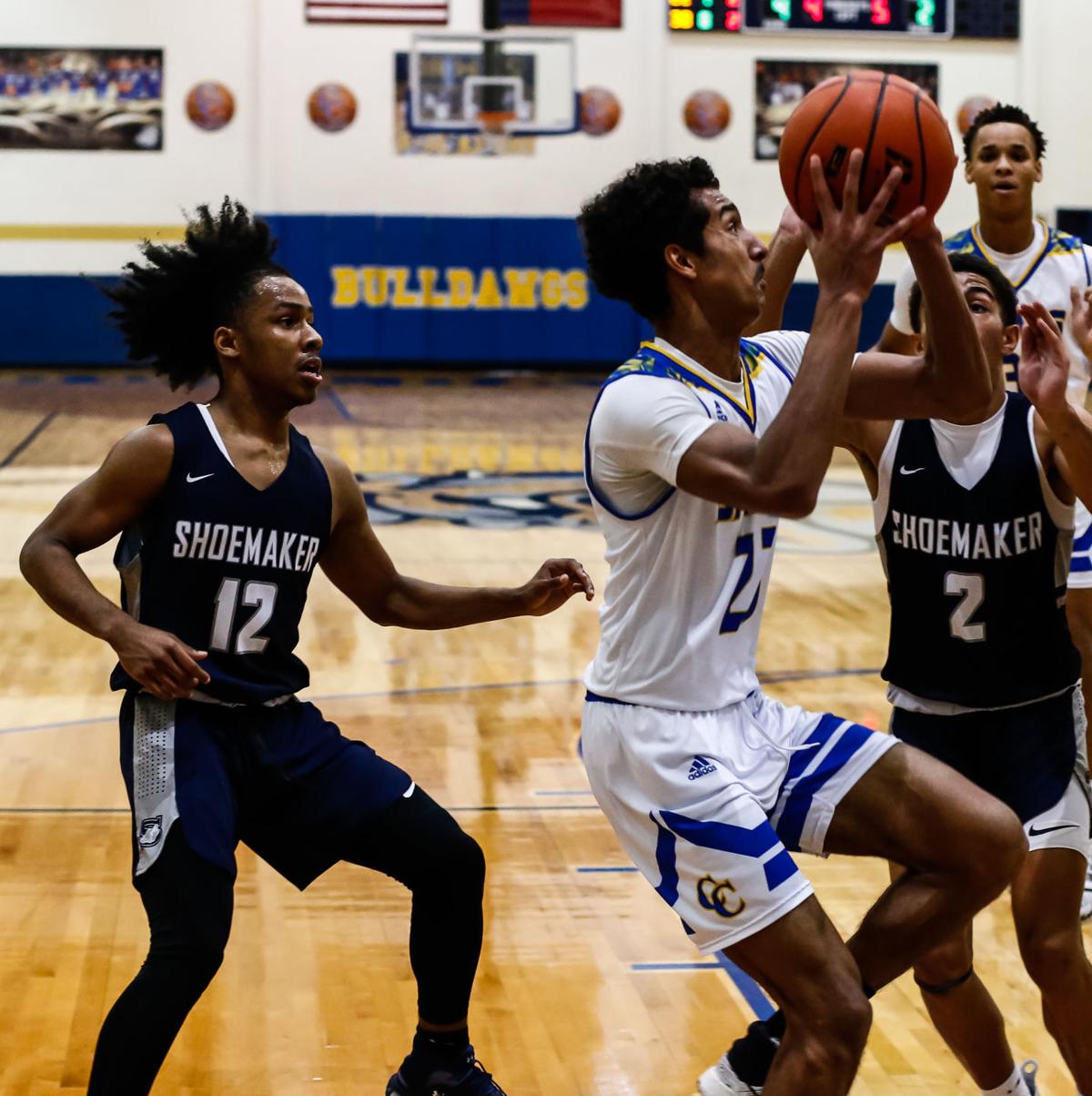 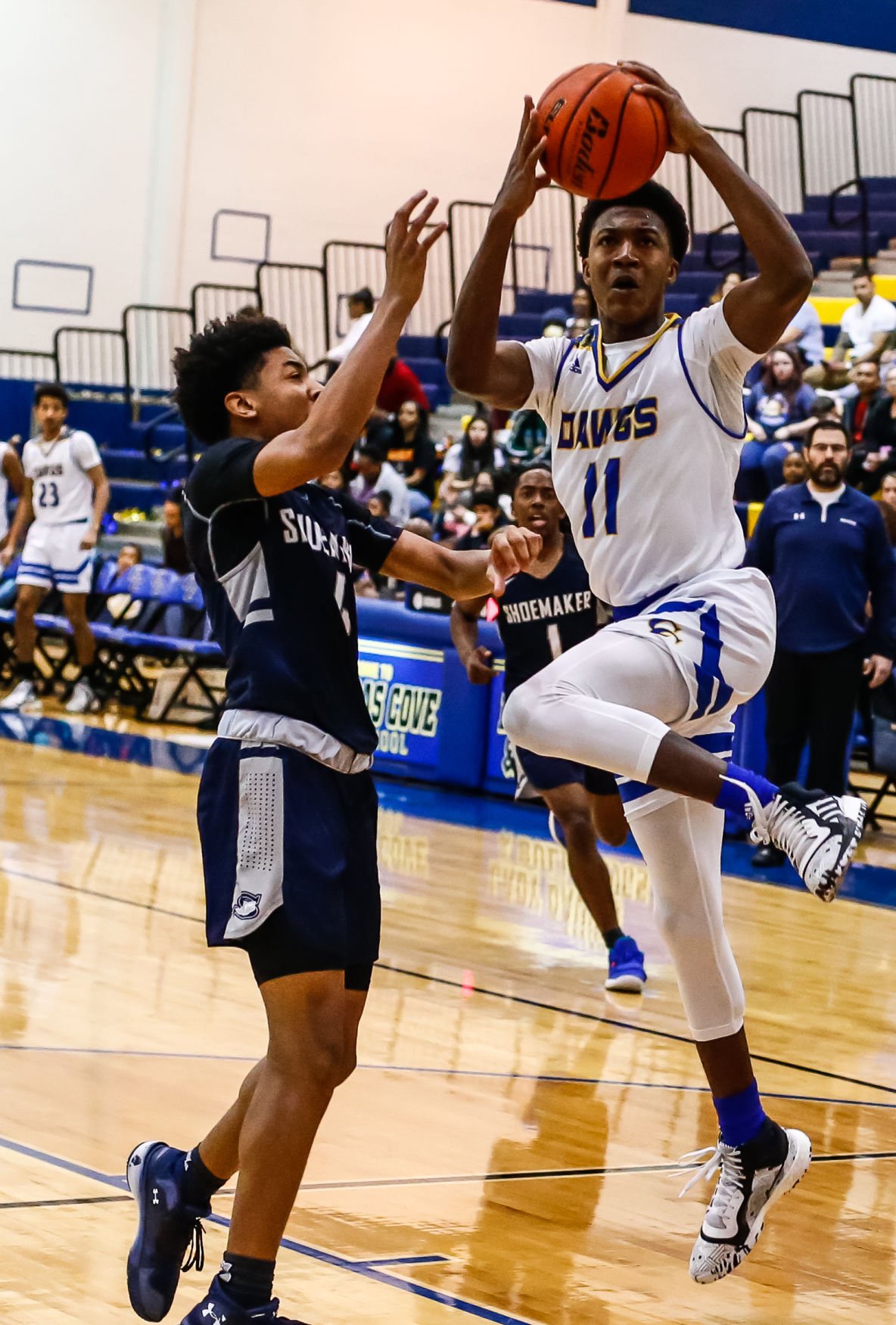 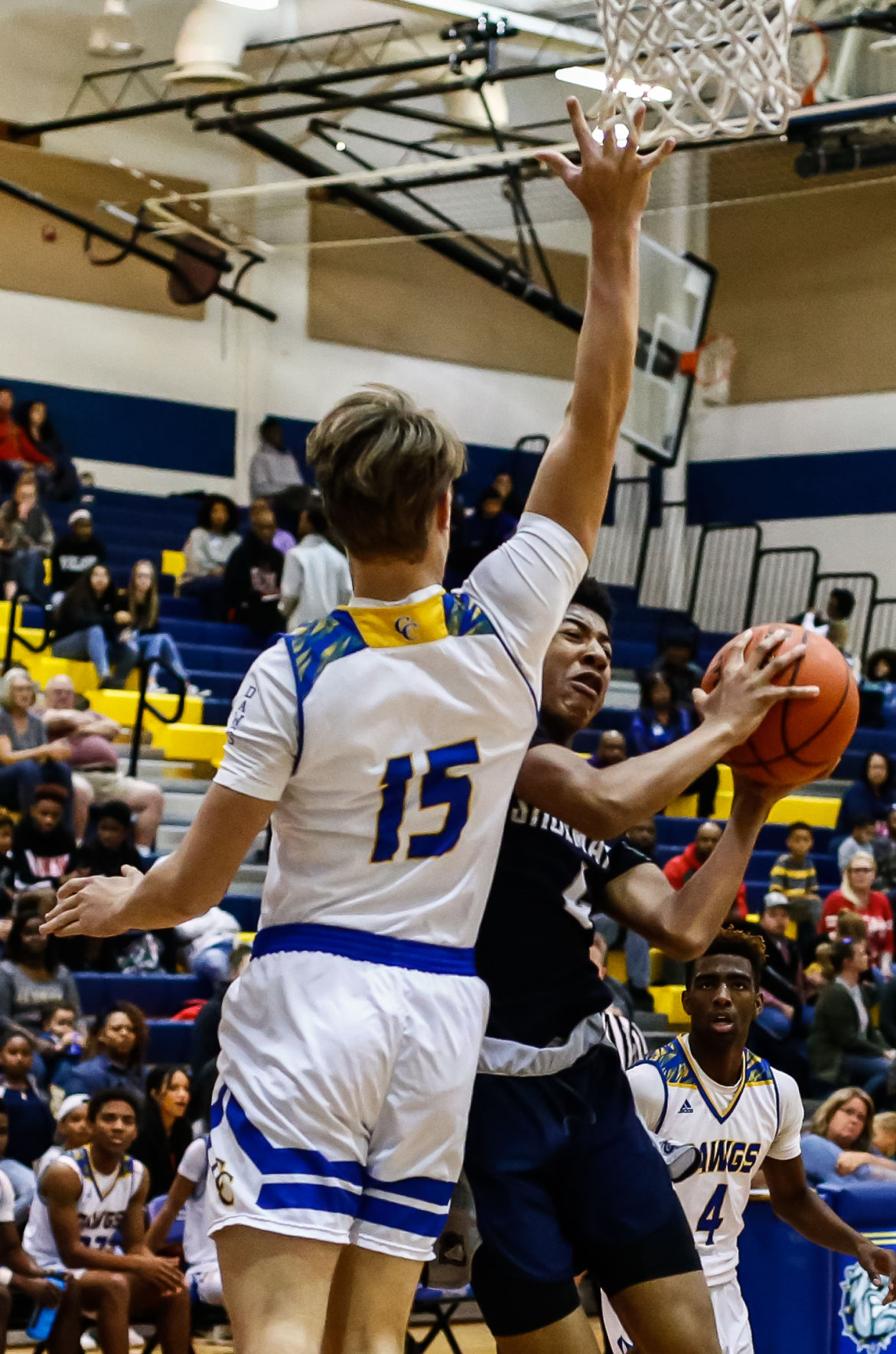 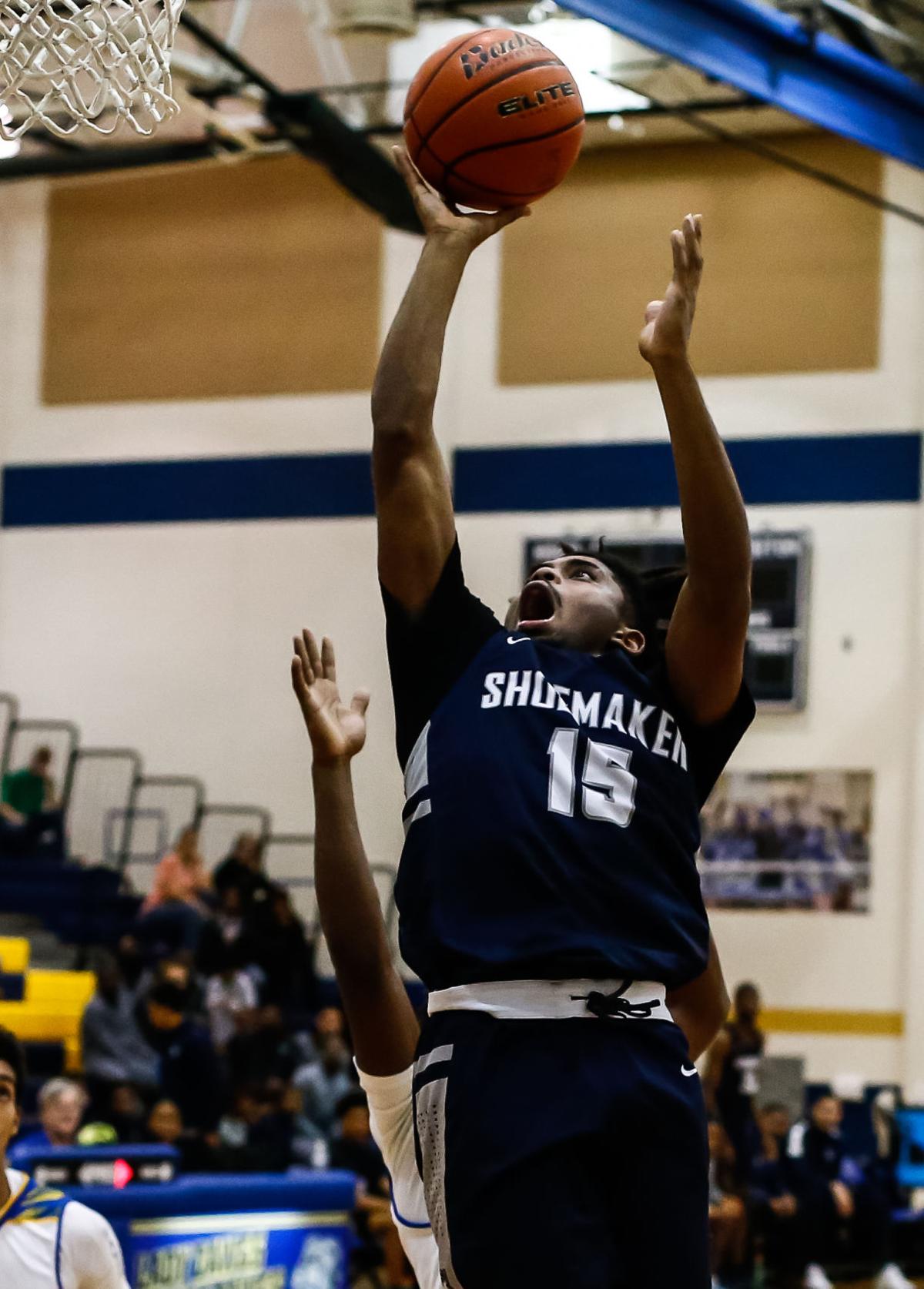 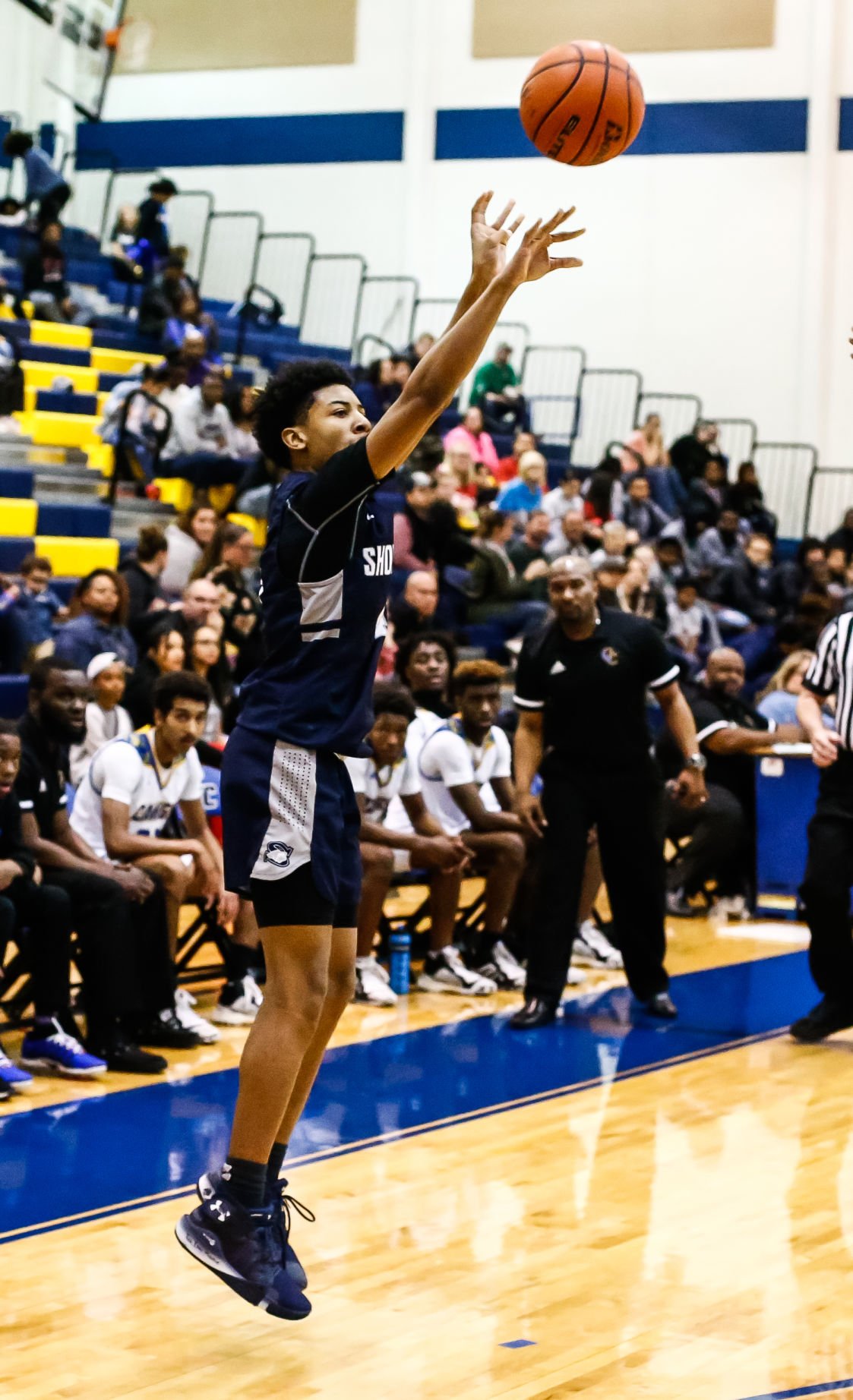 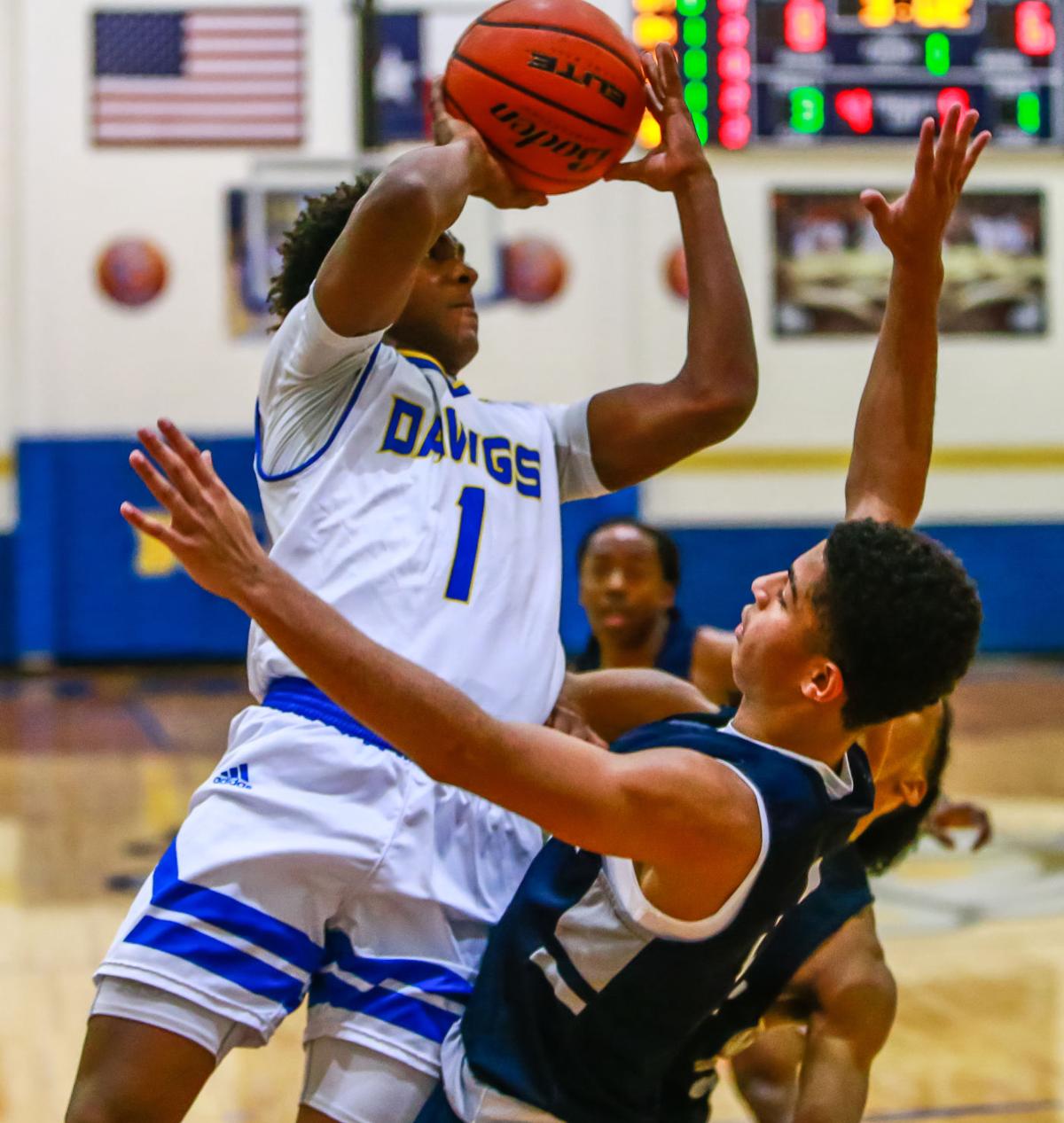 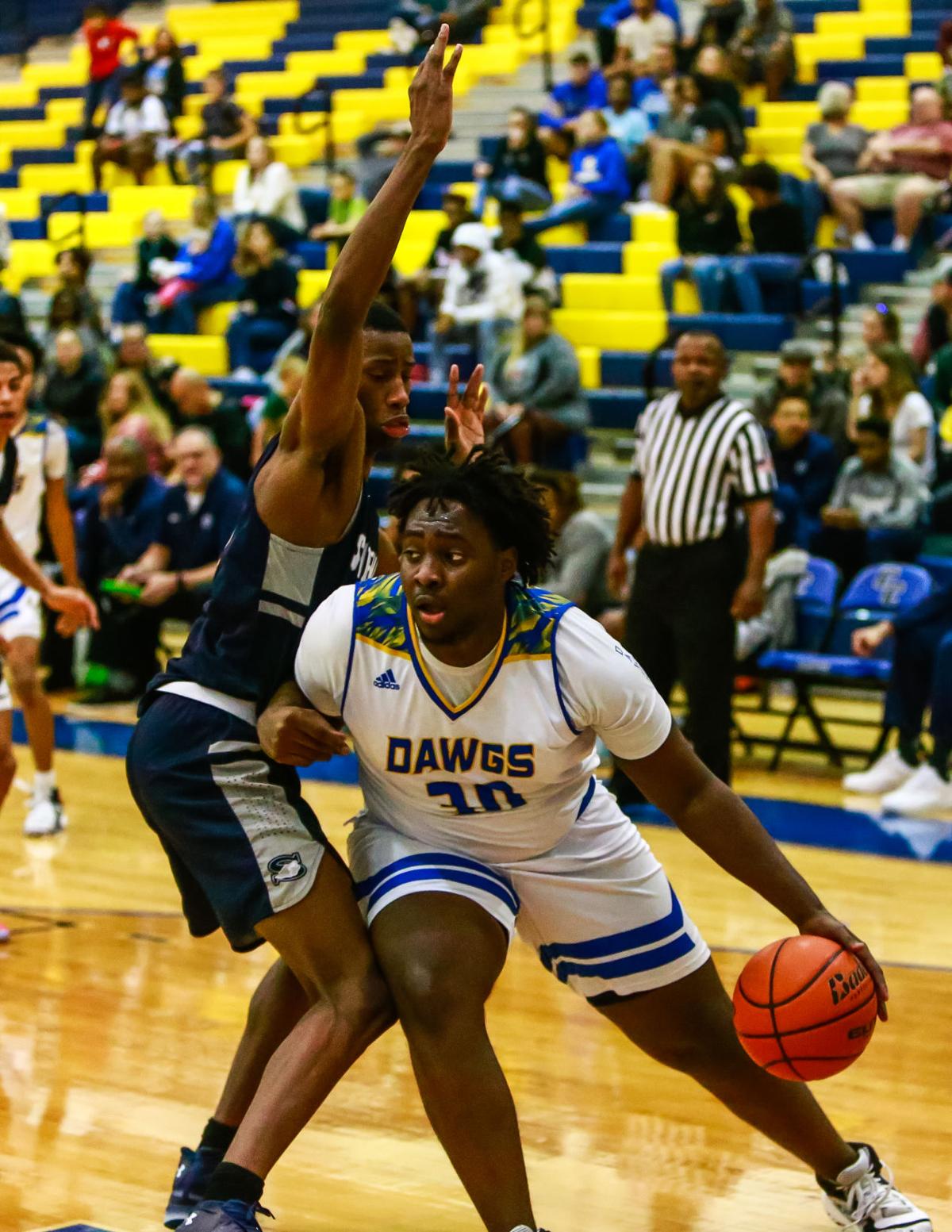 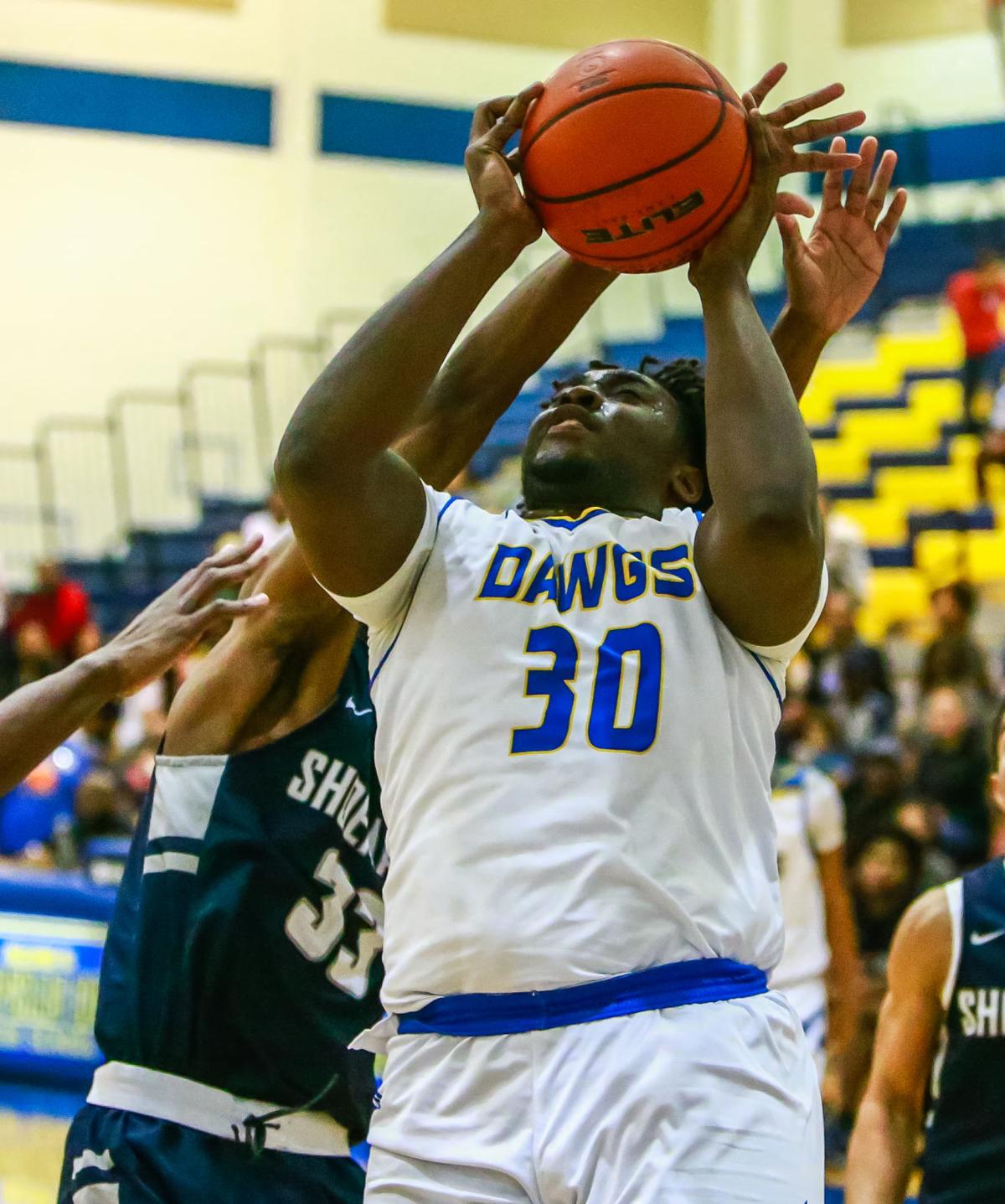 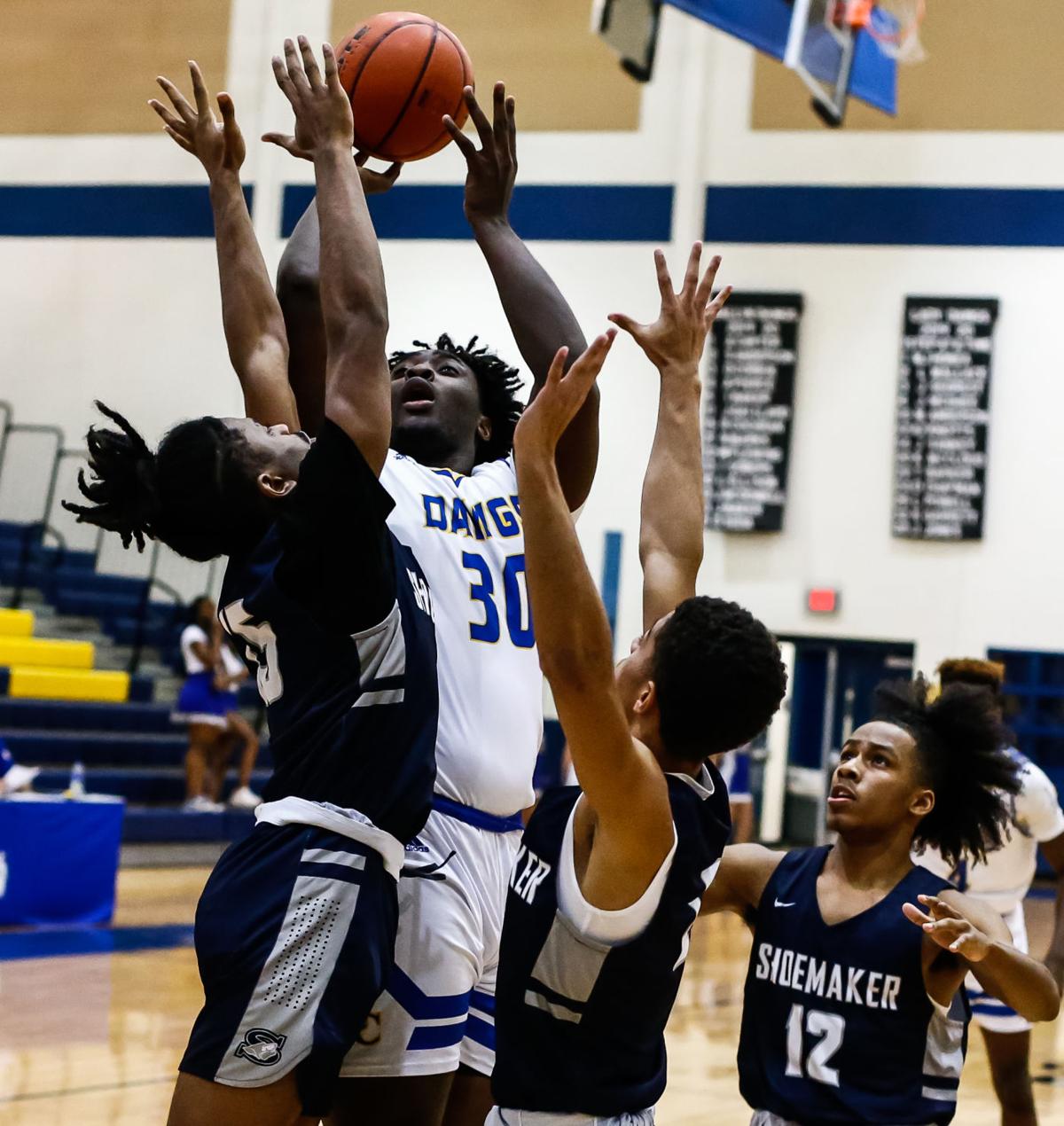 Copperas Cove's Warren Fleming (22) shoots with a Shoemaker defender at his side Friday at Copperas Cove,

After scoring six of his 10 points during a fourth-quarter comeback attempt, Shoemaker’s starting guard was forced to the sideline as a result of collecting his fifth personal foul.

And there was nothing Daniels could do but watch.

“I was nervous,” he said, “but I had trust in my teammates.

“I knew what they were capable of, and I knew they could do it.”

The intuition was correct.

Sobers connected on the first attempt but missed the second, allowing the Grey Wolves to corral

the ball. Once junior Ti’Ajae Owens got the ball in his hands, he pushed it down the court before making a contested layup as time expired, giving Shoemaker a 64-63 victory and sending the bench into a frenzy.

“This is what I dream about at night,” Owens said. “I was so excited.

“I just loved the feeling.”

It did not appear possible late in the game, when Sobers made a pair of free throws to create a 57-49 cushion with 1 minute, 38 seconds left in the fourth quarter.

Daniels sparked the rally, though, with a basket in the paint and his layup pulled the Grey Wolves within a point, 61-60, with 31.3 seconds remaining. Copperas Cove (16-16, 4-9 District 12-6A) responded with another Sobers free throw before K’Zjari Herrera’s steal and basket tied the game, setting the stage for the final sequence.

“We questioned whether to take a timeout,” Shoemaker head coach Jeremy Hensley said of the last play, “but I just thought, ‘No, we need to trust our guys.’

“We decided to let them go, and they got the ball up the court, and Owens finished.”

Shoemaker (15-17, 7-7) never led in the first half, trailing 15-8 following the first quarter and 27-26 at halftime, but the Grey Wolves claimed their first advantage at 31-30 on Daniels’ basket. Early in the fourth quarter, Herrera’s widened the gap to 47-44 before the Bulldawgs scored 11 unanswered points as part of a 13-2 outburst.

But it was not enough.

With the victory, the Grey Wolves pull within half a game of Harker Heights for fourth place with just two games remaining in their regular season schedule.

“We really needed this win,” Owens said. “We need to win all our games at this point.

“I just didn’t want to see this season slip away.”

TEMPLE — Leaned against a wall inside Wildcat Gym about 20 minutes after his team dispatched Copperas Cove 52-47 in workman-like fashion, Temp…