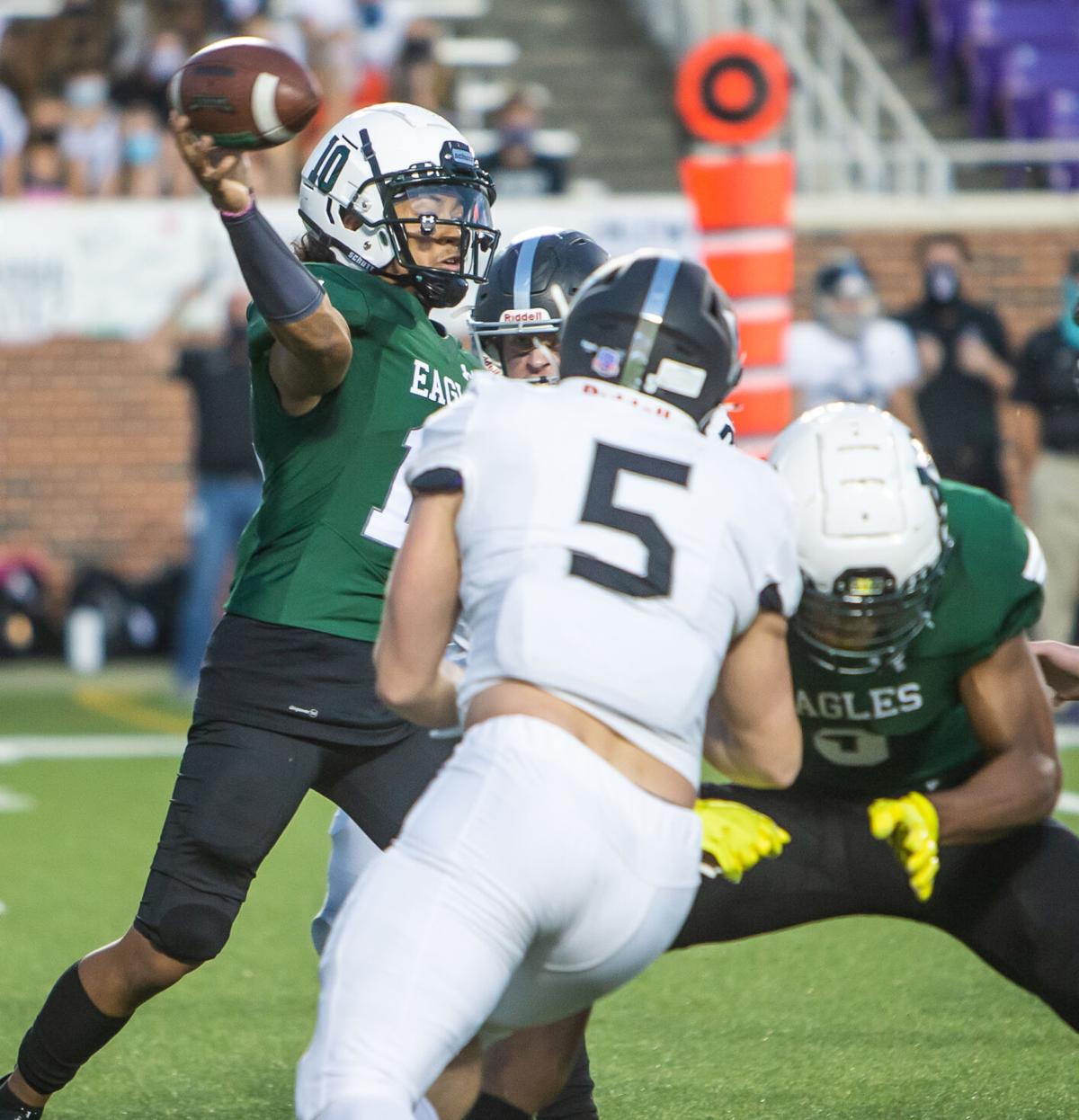 Ellison's Faliefa Mauga (10) throws under pressure from Vandegrift at UMHB's Crusader Stadium, Belton, on Thursday, October 1, 2020. At the half Ellison trailed 30-7. 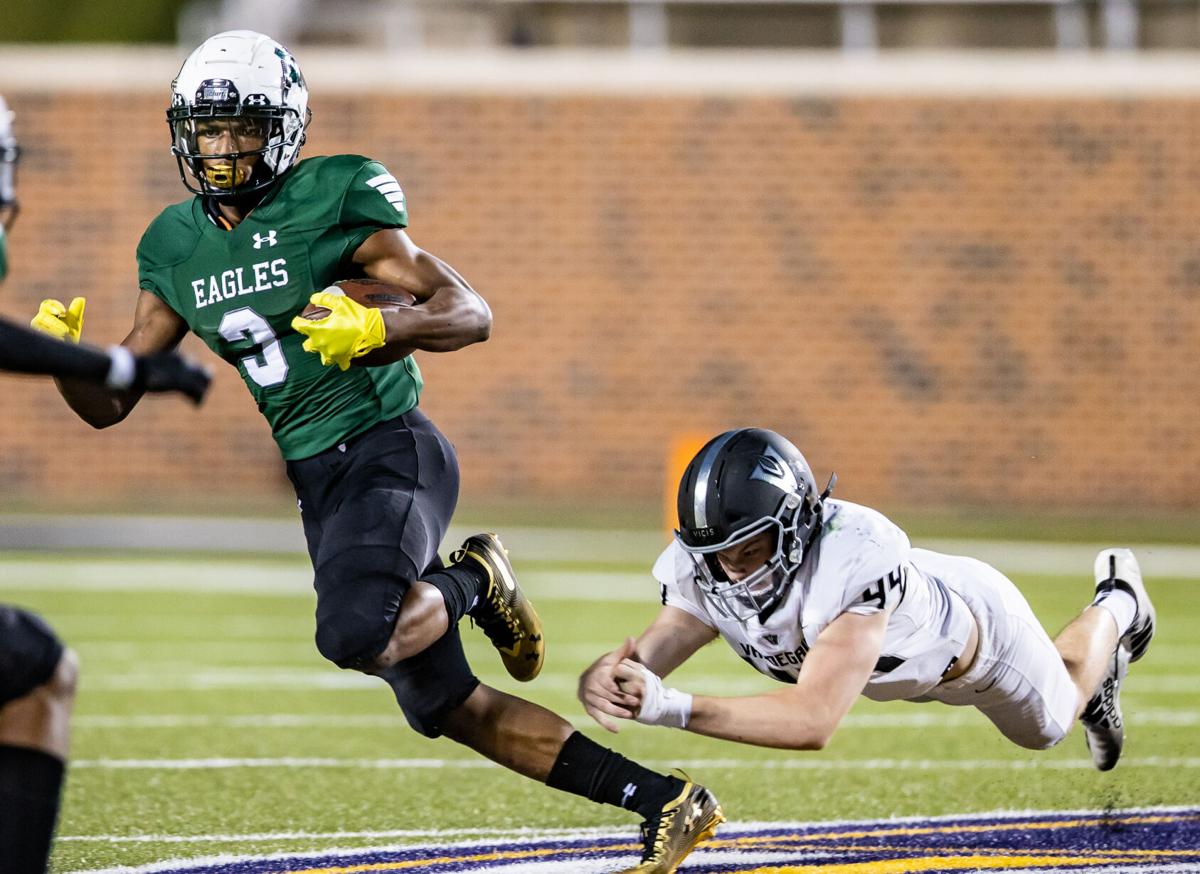 Ellison's Damashja Harris (3) avoids a tackle from Vandegrift's Tucker Harrison (44) at UMHB's Crusader Stadium, Belton, on Thursday, October 1, 2020. At the half Ellison trailed 30-7. 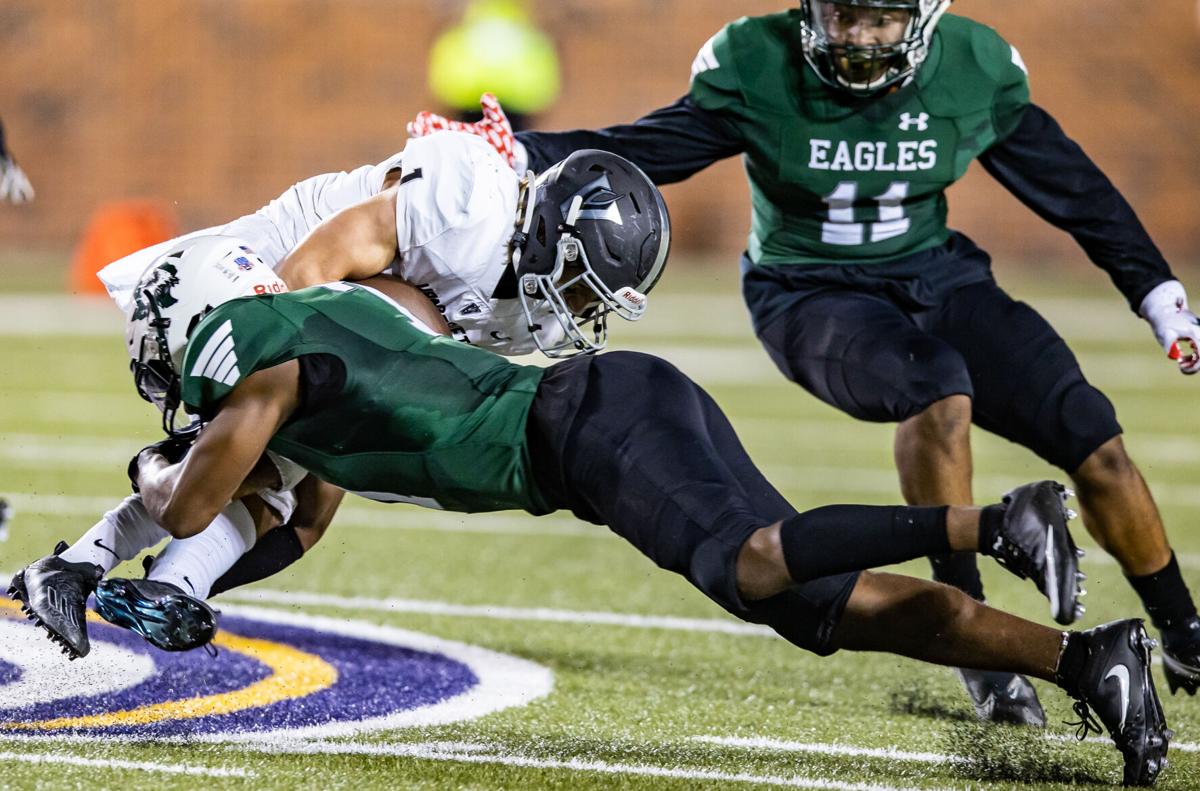 Ellison's Faliefa Mauga (10) throws under pressure from Vandegrift at UMHB's Crusader Stadium, Belton, on Thursday, October 1, 2020. At the half Ellison trailed 30-7.

Ellison's Damashja Harris (3) avoids a tackle from Vandegrift's Tucker Harrison (44) at UMHB's Crusader Stadium, Belton, on Thursday, October 1, 2020. At the half Ellison trailed 30-7.

The Vandegrift Vipers beat the Ellison Eagles 44-7 Thursday night at Crusader Stadium in Belton by playing great defense and forcing mistakes by the Eagles and taking advantage of them.

Two blocked punts by senior defensive back Logan Arnold for the Vipers in the first quarter, one recovered in the end zone and the other leading to a touchdown gave the Vipers an early 14-0 lead and they never looked back.

For the Eagles, senior quarterback Faliefa Mauga found senior wide receiver Khalid Mendez for a 47-yard touchdown and their only score in the first half.

Two passing touchdowns from senior quarterback Ryan Back to senior wide receiver Taylor Dummar rounded out the scoring for the Vipers in the first half and sent the Vipers to the locker room with a 30-7 lead.

In the second half, neither team did much on offense as both teams punted on their first couple of possessions.

On the Vipers third possession of the second half, they began just in Eagle territory and the drive was capped off by a 23-yard touchdown run by Back who evaded multiple would be tacklers on the way to the endzone.

The last touchdown of the game was a pick-six by junior defensive back Reece Beauchamp.

After the game, Todd Wright, the Eagles head coach, gave his thoughts.

“We made too many mistakes early. Defensively we did some good things and then we get two punts blocked,” Wright said. “We’ve gotta figure out what we’re good at on offense and defense and stick with it and not change things up because every time we change things up, now we don’t get good at anything.”

The Eagles have now played Liberty Hill and Vandegrift in their first two games of the season and Wright hopes that the tough nondistrict schedule will help his team when district starts.

“We’re playing good ones, we didn’t pick the easy schedule and we do that for a reason,” Wright said. “In hopes that when we get to district there won’t be anybody faster or anybody bigger.”

For the Eagles, senior running back Damashja Harris ran for 58 yards as a lone bright spot for the Eagles offense.

The Eagles will head to Hurst on Thursday for a matchup with Bell at 7 p.m.

The Vipers will play Stony Point at home next Friday night with a 7 p.m. kickoff.

District co-leader Temple surges in second half to bury Ellison

TEMPLE — Ellison entered its tangle against Temple with one win in six tries, though three of its losses in District 12-6A were by an average …