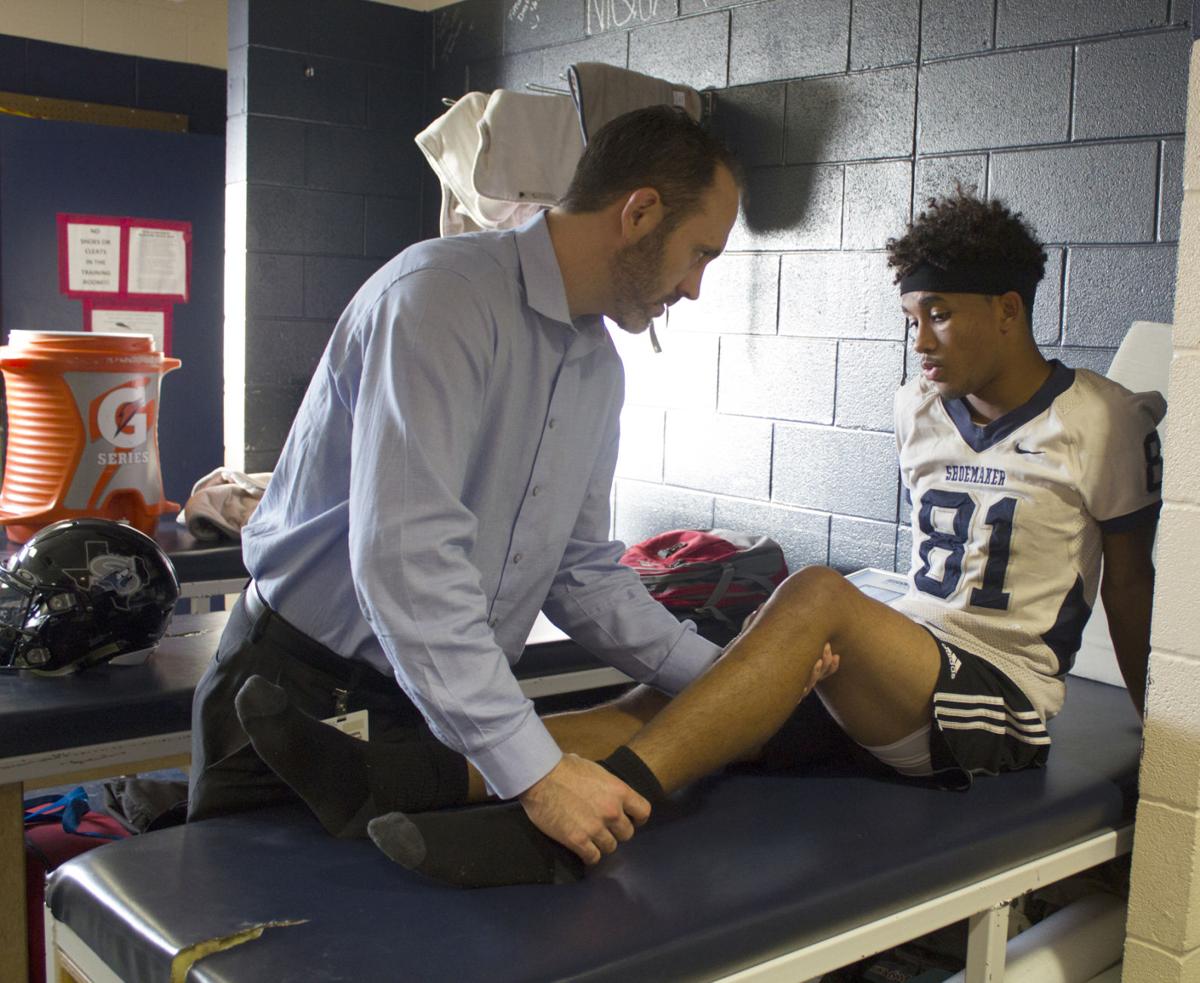 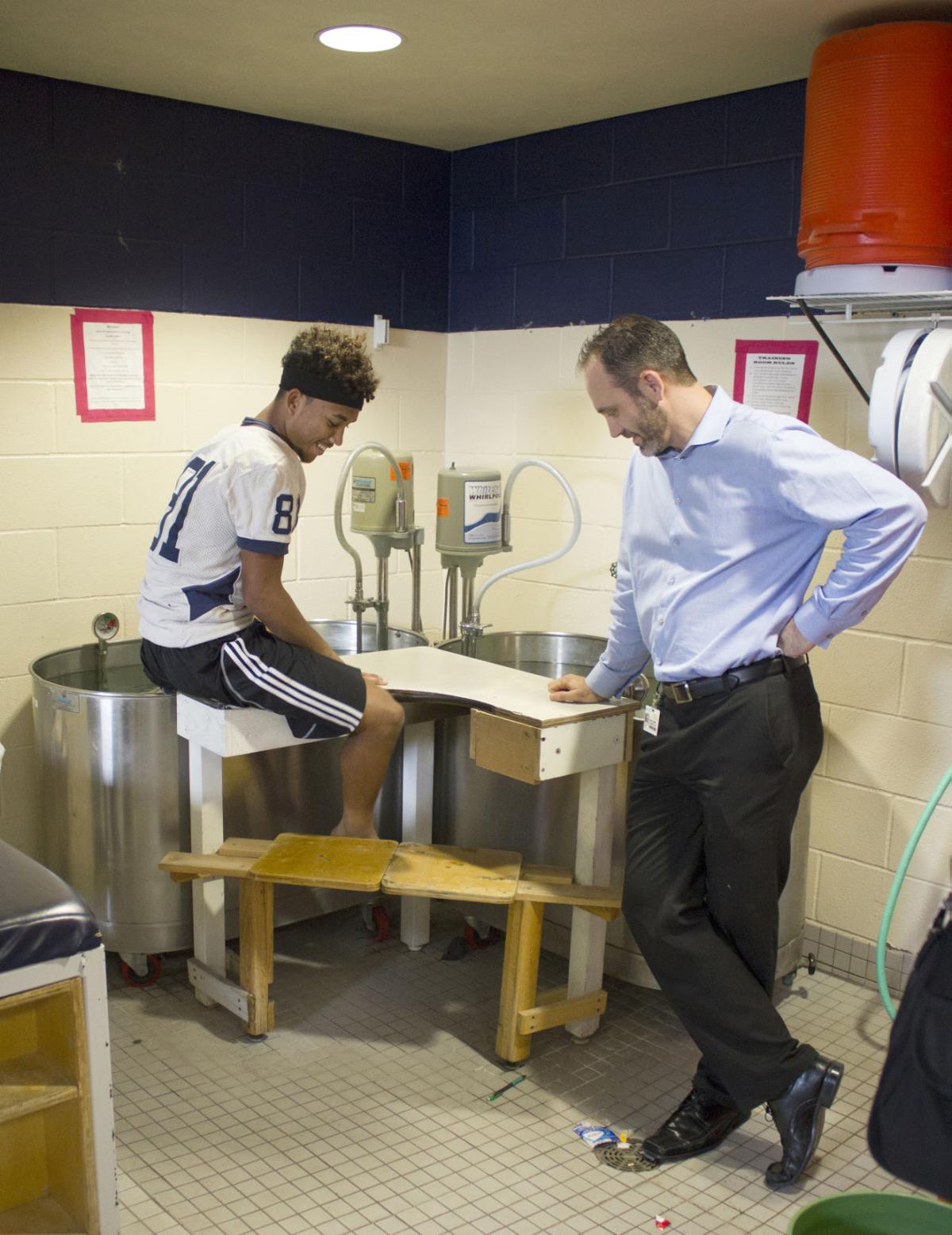 Chris Speidel, 17, ices his injured knee while talking with Dr. Robert Hansen at Shoemaker High School on Thursday, Nov. 12, 2015. Hansen is a local orthopedic surgeon with Precision Medical Group, and Speidel is a junior and varsity wide receiver at Shoemaker. 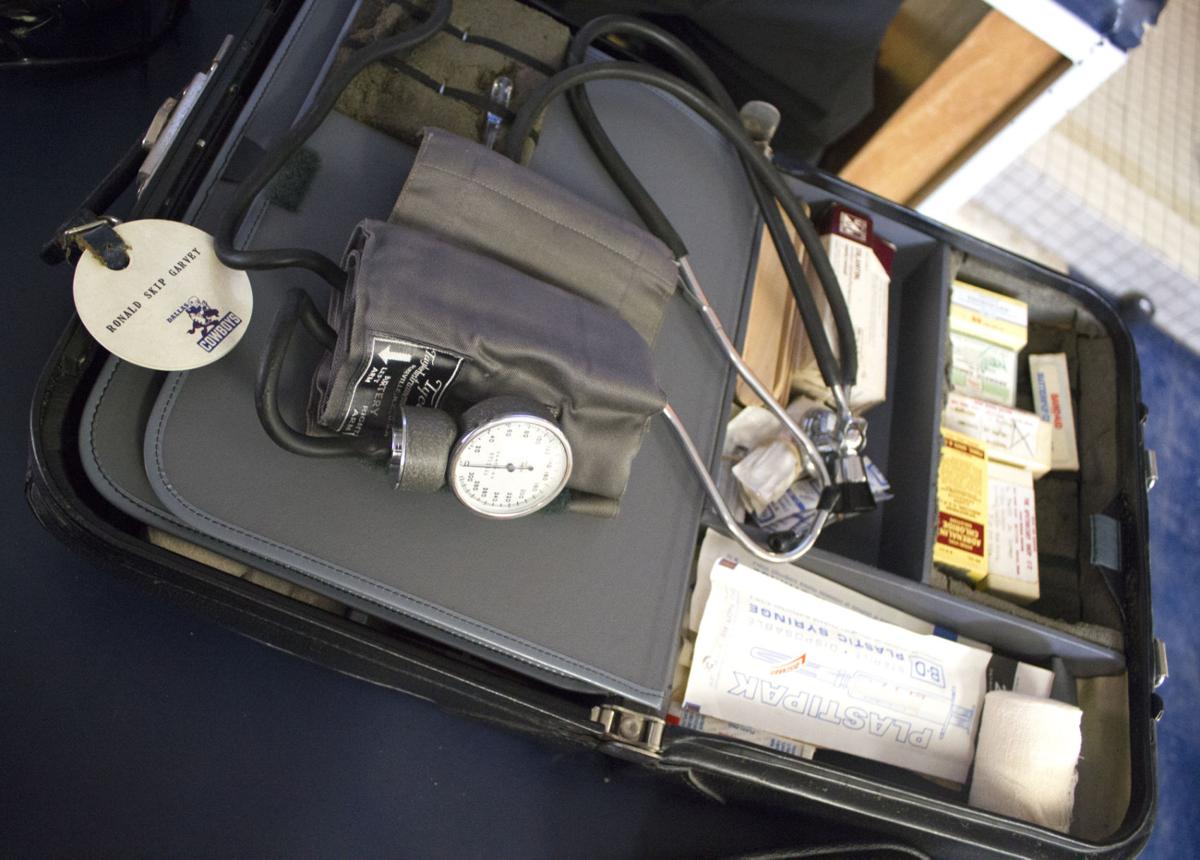 The contents of Ronald Skip Garvey’s bag, a medical trainer for the Dallas Cowboys and grandfather of local sports medicine doctor and orthopedic surgeon, Dr. Robert Hansen, is seen.

Chris Speidel, 17, ices his injured knee while talking with Dr. Robert Hansen at Shoemaker High School on Thursday, Nov. 12, 2015. Hansen is a local orthopedic surgeon with Precision Medical Group, and Speidel is a junior and varsity wide receiver at Shoemaker.

The contents of Ronald Skip Garvey’s bag, a medical trainer for the Dallas Cowboys and grandfather of local sports medicine doctor and orthopedic surgeon, Dr. Robert Hansen, is seen.

Dr. Robert Hansen describes himself growing up as an “athlete” and “a science nerd.”

The combination made sports medicine an obvious choice for Hansen, 35, who joined Metroplex Hospital in August 2014 as an orthopedic surgeon and director of sports medicine.

“I was an athlete. In high school, (I played) everything. My biggest sports were wrestling and baseball, with a little bit of football, and then I played baseball in college, at Columbia (University),” he said.

But the medical profession also runs in Hansen’s family.

Before Hansen was born, his grandfather, the late Dr. Ronald F. Garvey, was the Dallas Cowboys team physician. The family’s love of the team instilled a love of sports in Hansen from an early age.

“I used to go to (Cowboys) games with him all the time. I’ve got a lot of memories at Texas Stadium,” Hansen said.

Though his demanding schedule as a surgeon leaves little time for Hansen to play sports much himself these days, he still finds time to invest in the next generation of athletes.

Hansen can be found underneath the Friday night lights at every Copperas Cove home varsity football game, standing on the sidelines as a trained set of eyes in case any injuries occur on the field.

Working with young athletes is one of the most rewarding parts of his job, Hansen said.

“Kids, they want to get back. That’s the good thing about high schoolers. It’s cool to see if it works and somebody goes back to the sport. That’s kind of the best test,” he said.

During his own athletic career, Hansen said he spent a lot of time himself in the trainer’s room for minor injuries, and had knee surgery his freshman year of college, helping him relate to his patients.

“When I had my knee done, they told me I couldn’t play for a year. It was devastating. When you’re a high school kid, it’s like your identity. If you take someone out of their sport, to them it’s life-altering.”

Hansen also frequently visits the Shoemaker High School training room to look over existing injuries and perform routine physicals on the young athletes, though he said “the trainers are the ones that really take care of the kids.”

“I love working with Dr. Hansen and have learned a lot from him,” said Tera Sony, head athletic trainer at Shoemaker.

“He makes time for our athletes whenever they need him, no matter what. The students don’t want to need him, but love the fact he’s always around to support them,” she said.

Sony said having a doctor on the sidelines for sporting events is “a huge asset” for trainers.”

“It gives us another set of eyes watching the athletes, and if they do get hurt, we have a doctor right there,” she said.

Hansen said he hopes to remain on the sidelines as often as he can, and enjoys just being able to watch local athletes perform.

“It’s fun. You get to see the kids play. That’s where most injuries happen that you can see right there and help assist,” Hansen said.