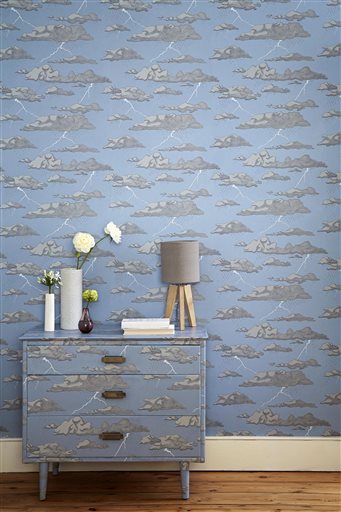 In this publicity photo provided by abigailedwards.com, the designer Abigail Edwards evokes nature in startling and interesting ways in her wallpaper, "Storm Clouds." Its available in grey or blue and features metallic lightning bolts. (AP Photo/abigailedwards.com, Alun Callender) 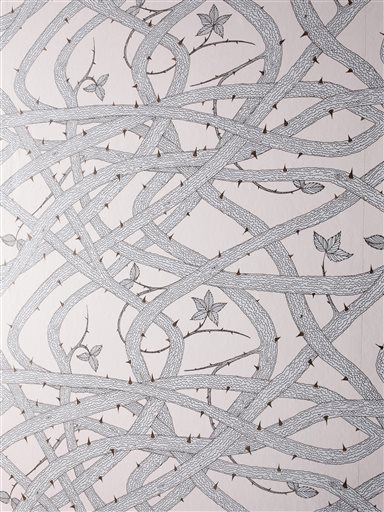 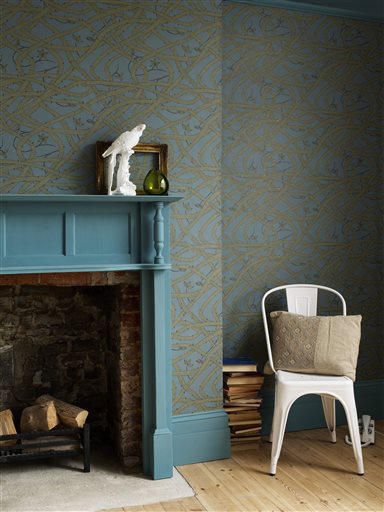 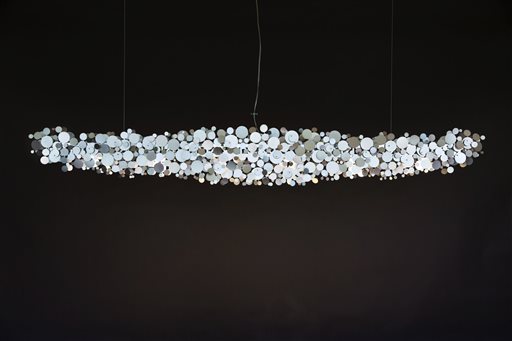 In this publicity photo provided by abigailedwards.com, the designer Abigail Edwards evokes nature in startling and interesting ways in her wallpaper, "Storm Clouds." Its available in grey or blue and features metallic lightning bolts. (AP Photo/abigailedwards.com, Alun Callender)

Moth-wing light fixtures? Thunderhead wallpaper? If you're an armchair naturalist, you'll love one of this year's big home decor trends.

Artists and artisans have captured flora, fauna and even meteorology in media such as photography, illustration, metal and clay. The designs, translated into wall decor and furnishings, range from startling to serene.

Clinton Friedman's garden in Durban, South Africa, is home to more than 250 trees and 150 succulent species. Desiccated leaves, freshly pulled roots and labyrinthine flower heads all serve as material for his close-up photographs. West Elm has previously collaborated with Friedman on a pillow collection; this season they've got his 28-inch, square, white-framed prints of aloe plants. The oversize spiky succulents look like flora — or perhaps even fauna — from another planet. (www.westelm.com )

Brooklyn, N.Y.-based Christine Facella has used her experience as an illustrator and model maker at New York's Museum of Natural History to inform her collection of porcelain animal skulls. The accuracy and intricacy of her work results from sculpting up to 20 molds for each piece.

Facella portrays many denizens of the North American wilderness, including coyotes, bobcats and beavers. The skulls are a compelling meld of antiquarian curiosity and contemporary objet d'art. The teeth on some gleam with 14-karat-gold luster. (www.beetleandflor.com )

Lighting sculptor David D'Imperio finds his inspiration in nature's structures: The organic geometry of moth wings, honeycombs and crystals gets turned into elegant and unusual lighting in the old post office in Stony Run, Pa., that D'Imperio has turned into a studio.

Pendants and chandeliers, as well as suspended linear fixtures, are crafted out of materials such as stainless steel and aluminum. D'Imperio's Ozone light is a 5-foot length of shimmering circles, like fizzy bubbles lit from within. Silver powder-coated steel and frosted Pyrex glass are transformed into the Neuron fixture for wall or ceiling. You can choose the color of the nucleus. Hydra is an otherworldly chandelier done in a metallic blue-green; the designer was inspired by the microscopic denizens of the deep sea. (www.daviddimperio.com )

At this spring's International Contemporary Furniture Fair in New York City, local designer Barbara Barran's showed her Ice rug, inspired by the surface of frozen water. The piece's striations and cool, watery tones gave the slightly unsettling but wholly intriguing sense of standing on actual ice. That she's rendered this illusion in hand-tufted wool is even more remarkable. (www.classicrug.com )

British designer Abigail Edwards showed her nature-inspired wallpaper at the fair. She's launched a new design called Storm Clouds — ominous thunderheads printed on a gray or blue background, with white or copper metallic lightning bolts. Her Brambleweb paper depicts an Art Nouveau-meets-Gothic swirl of brambles tipped with tiny metallic thorns. And Wilson's Crystals are inspired by the work of Wilson Bentley, who spent half a century photographing snowflakes. The wallpaper features an intricate print of 30 snowflakes.

Parisian designer Gilles Caffier uses ceramics as the medium for pieces like the Turtle Lamp, whose earthen-hued base evokes the plump, ridged profile of a turtle shell. He makes textured stools and vases in matte ivory or graphite that resemble coral reefs, or perhaps barnacle-laden pier posts, or maybe octopi tentacles. That's the wonderful thing about nature: so much scope for imagination. (www.gillescaffier.com )