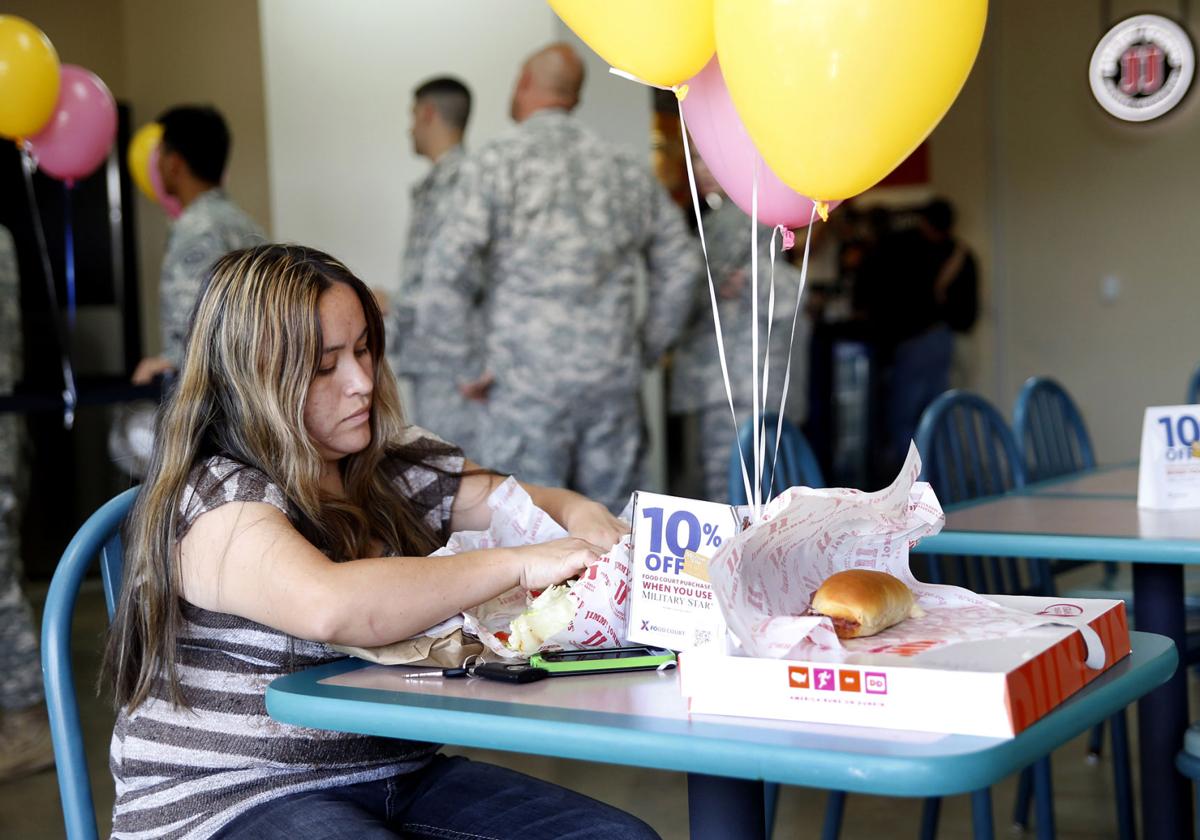 Brenda Burns' eats food from Jimmy John's Wednesday during the grand opening of the eatery at the 19th Street Exchange at Fort Hood. Dunkin Donuts, which shares the same location as Jimmy John's, also celebrated its grand opening. 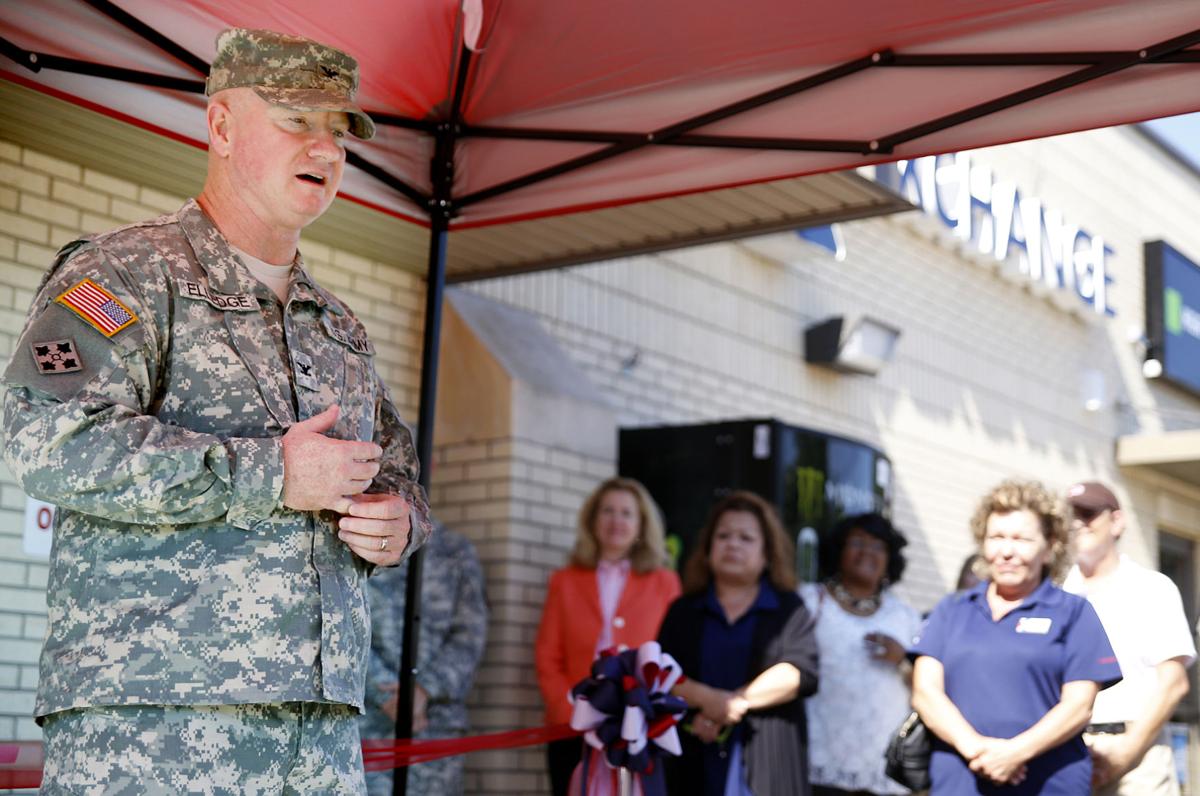 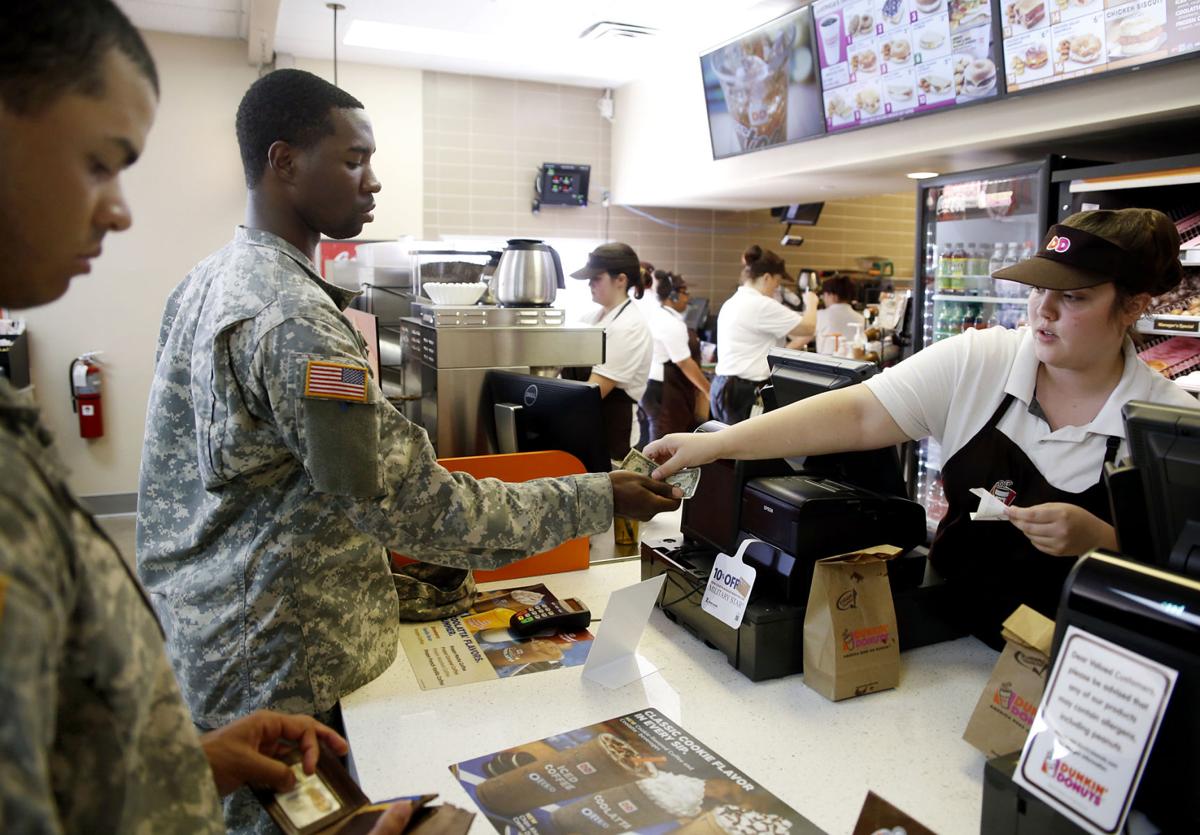 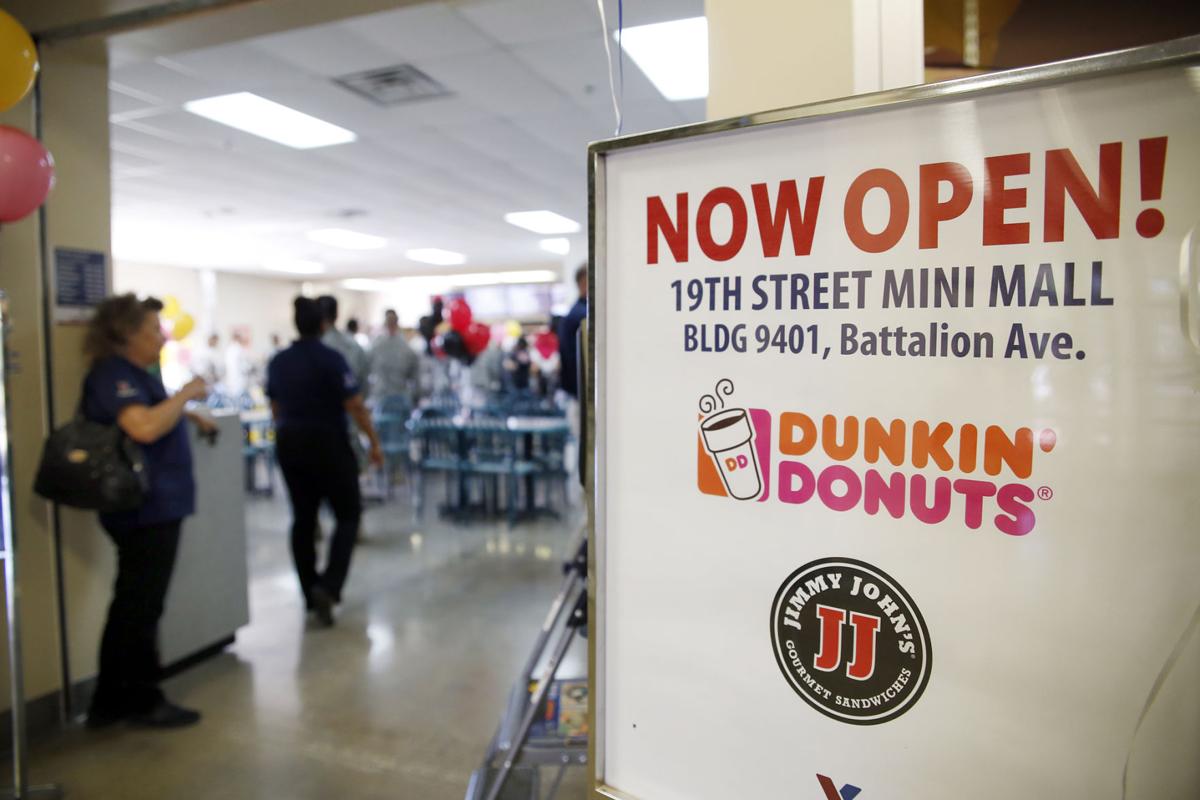 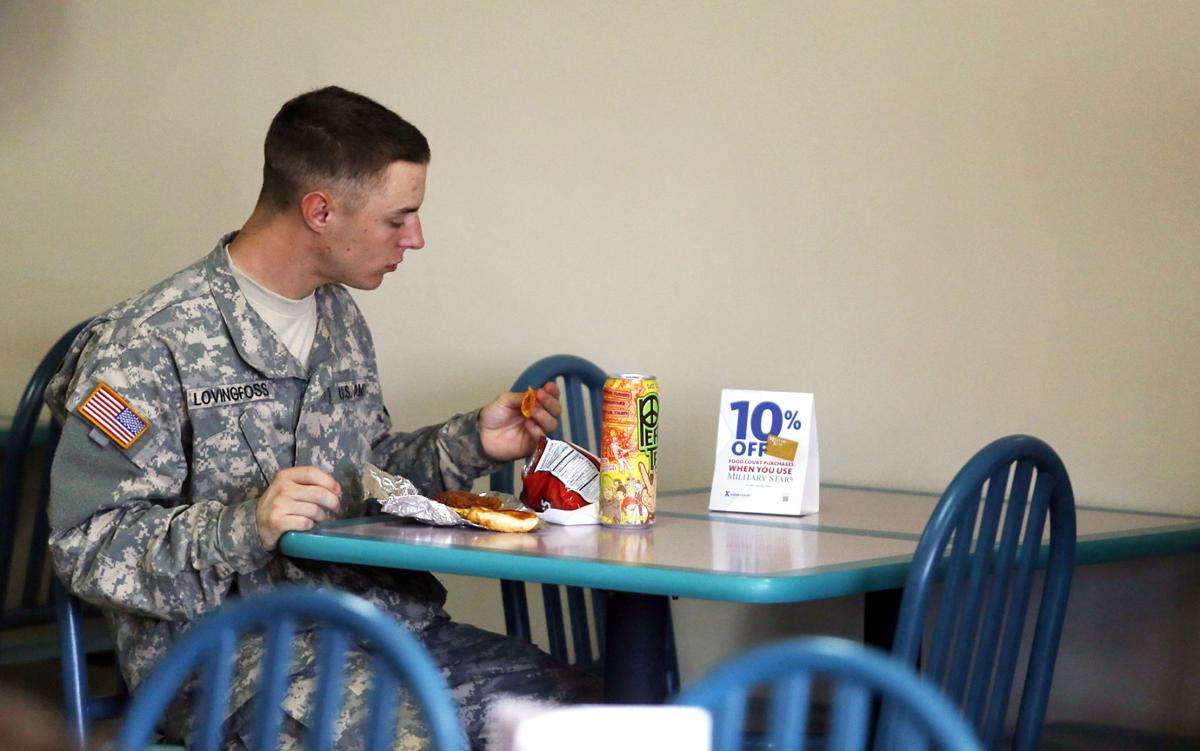 Then Pvt. Keith Lovingfoss eats food from Jimmy John's in June 2015 during the grand opening of the eatery at the 19th Street Exchange at Fort Hood. 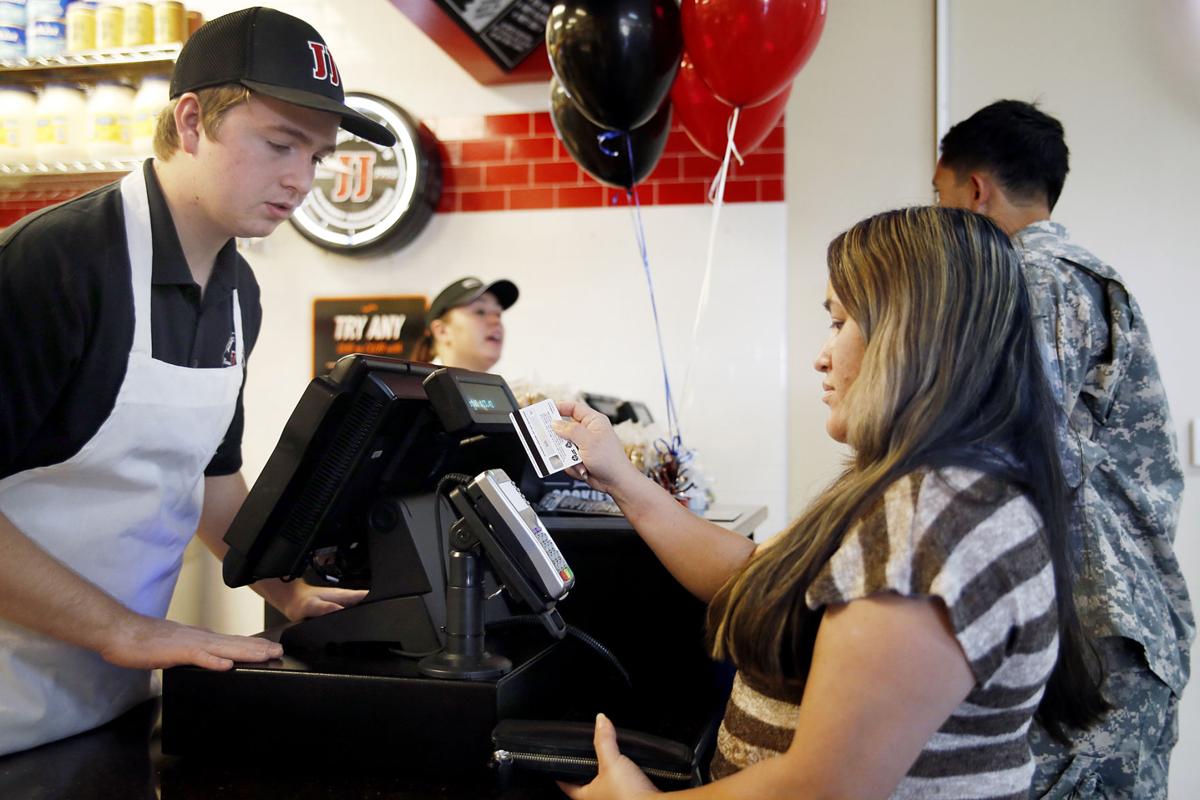 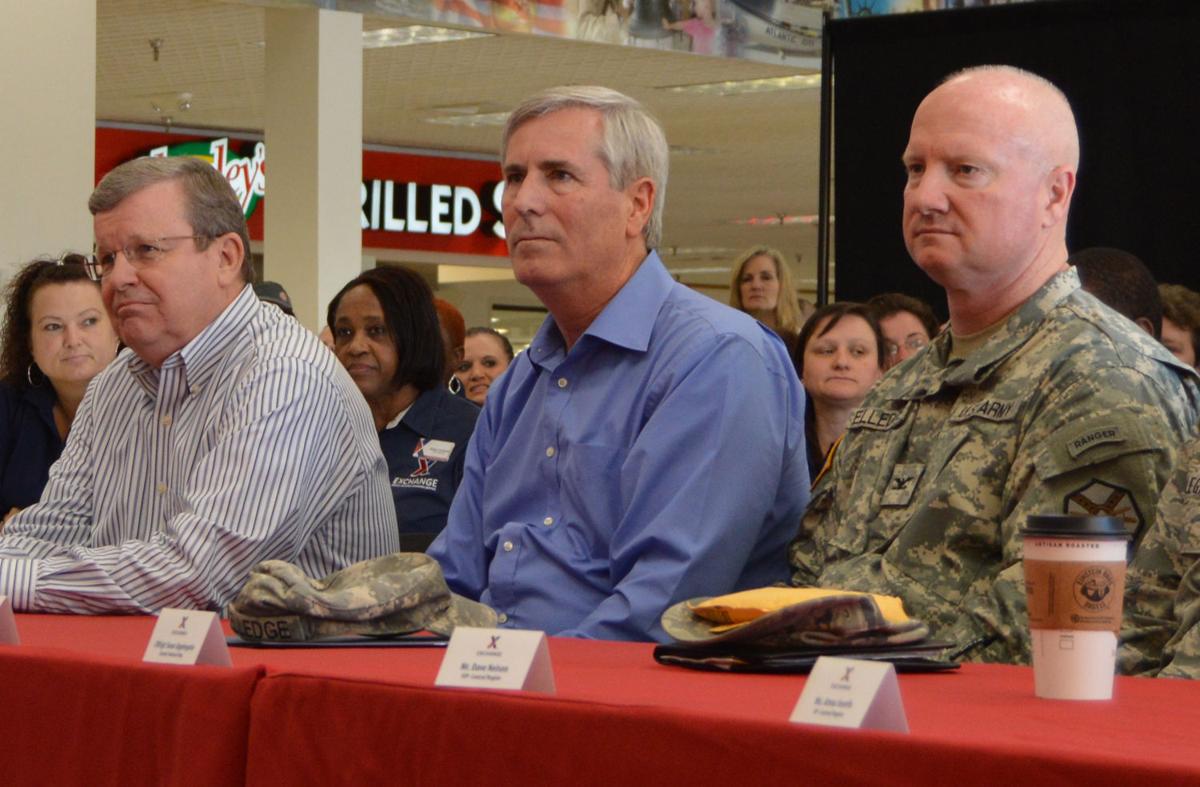 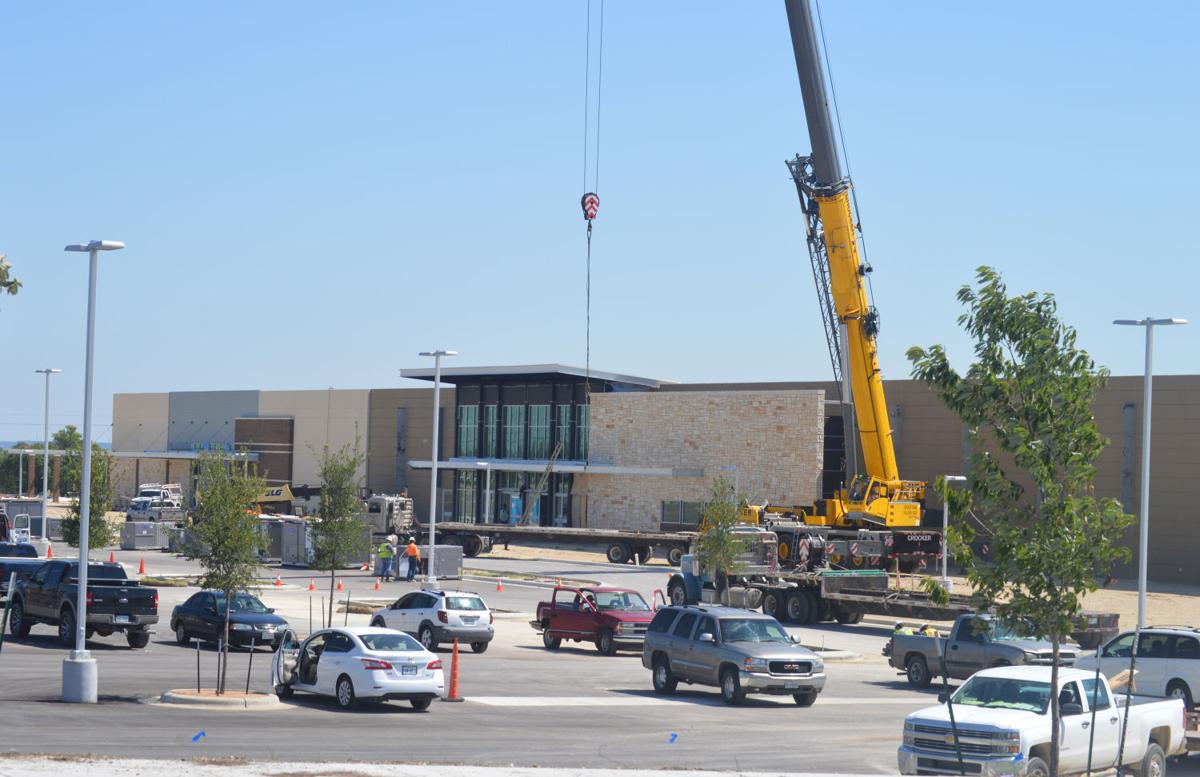 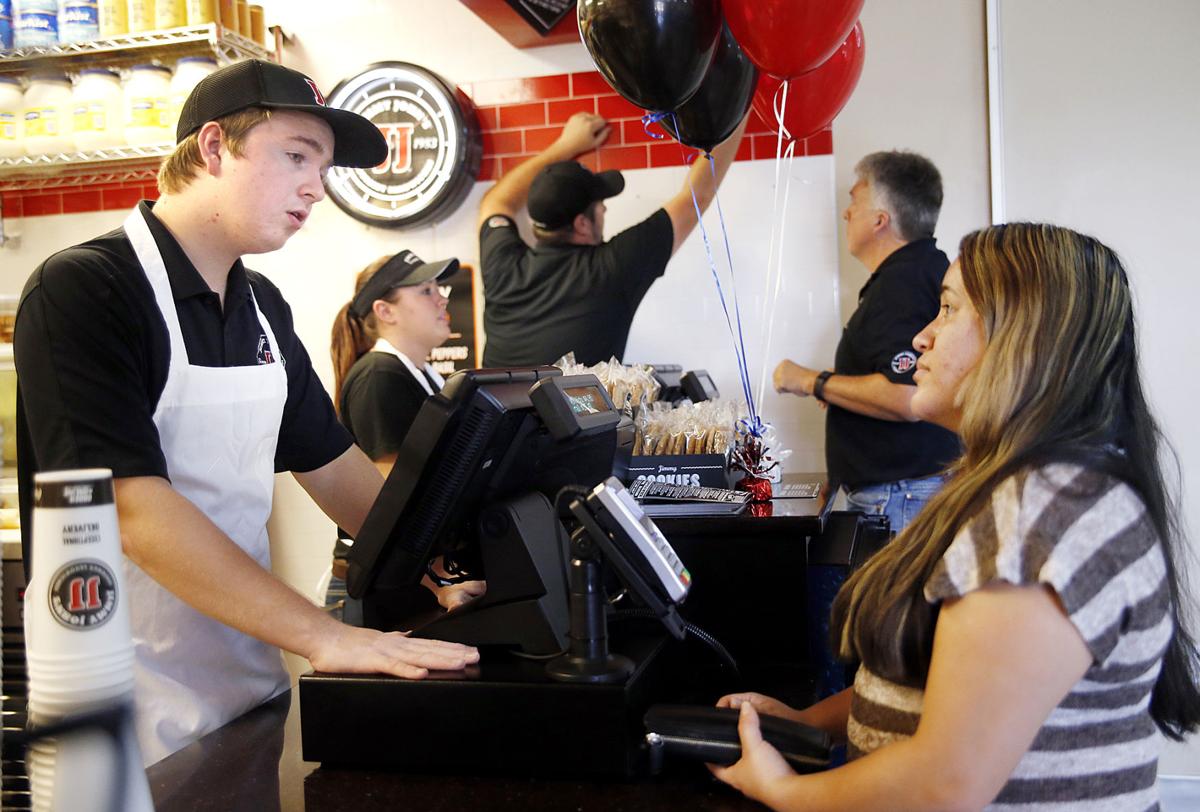 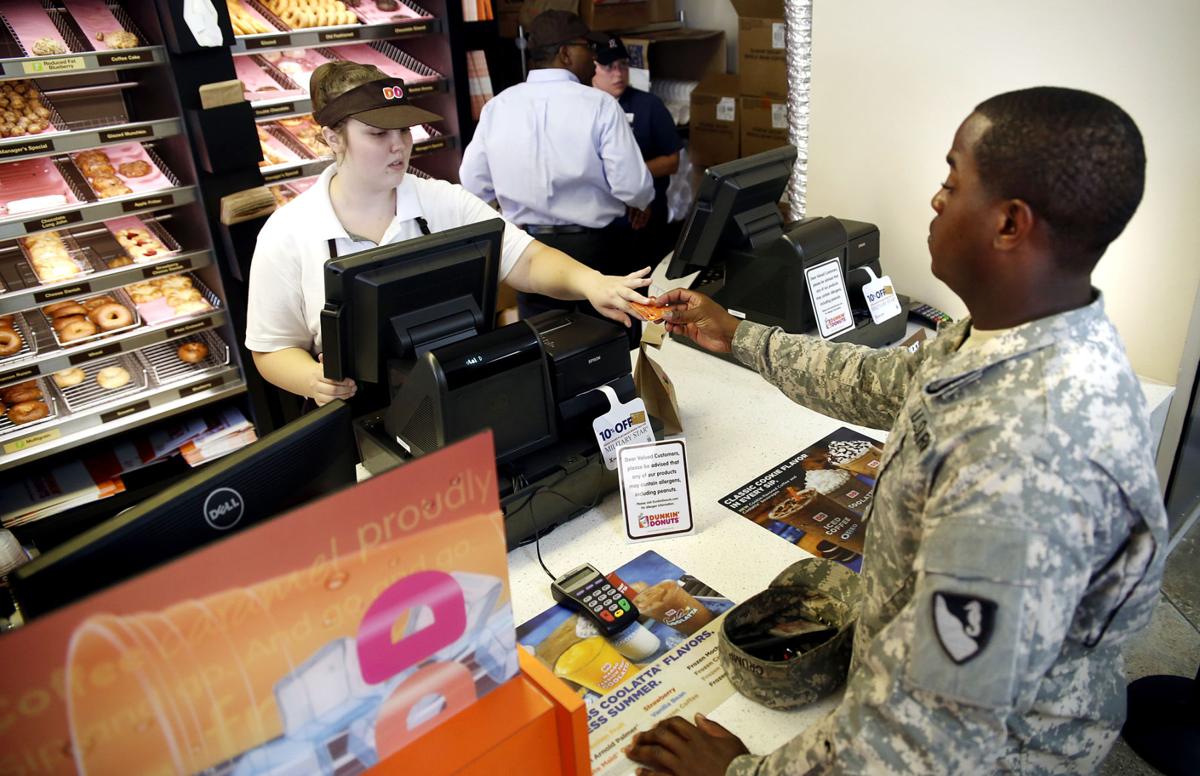 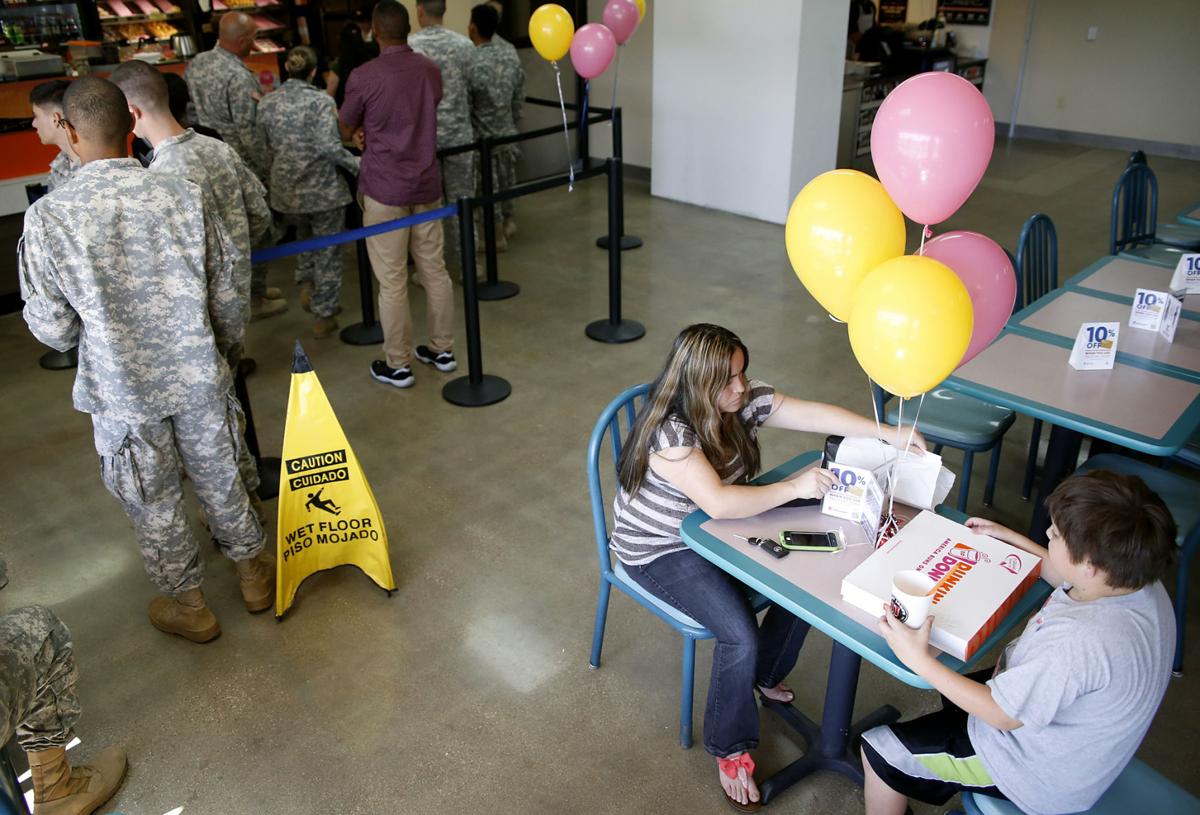 Brenda Burns and her son Adrian Burns, 12, eat food from Jimmy Johns and Dunkin Donuts Wednesday during the grand opening of the eateries at the 19th Street Exchange at Fort Hood. 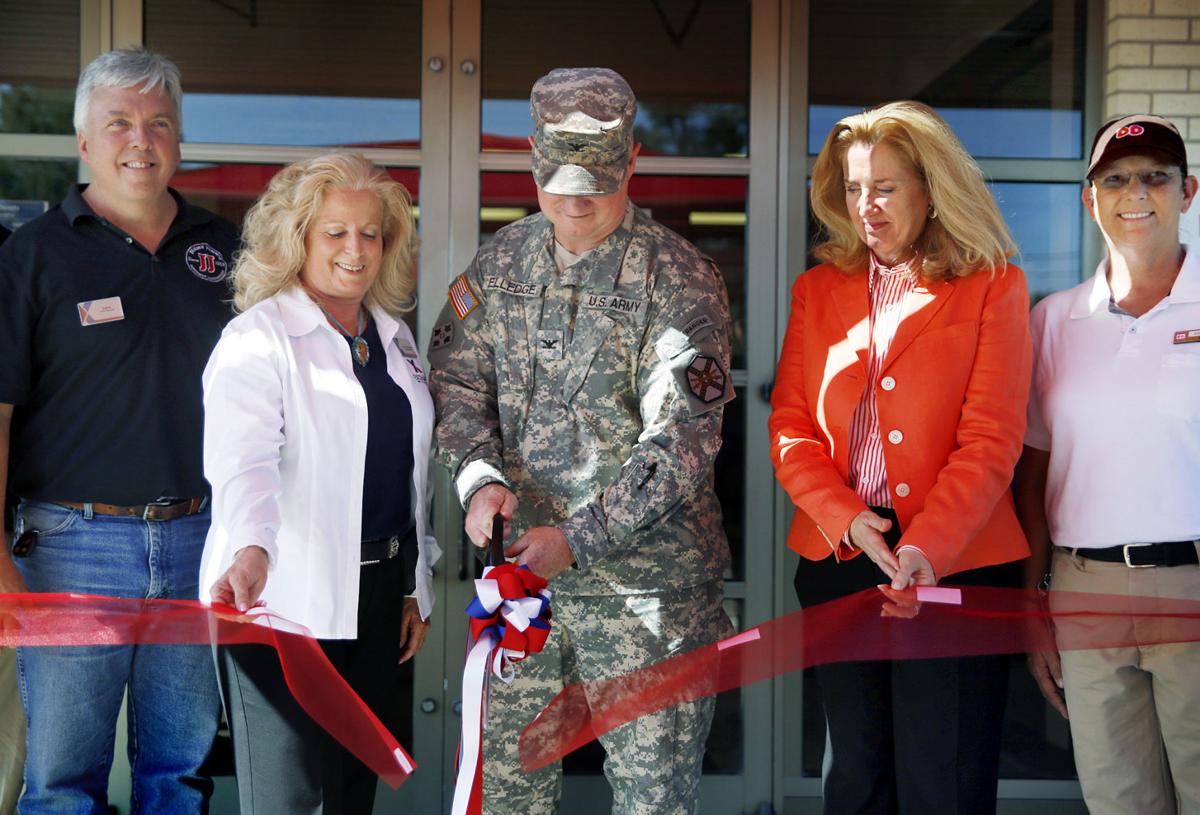 Brenda Burns' eats food from Jimmy John's Wednesday during the grand opening of the eatery at the 19th Street Exchange at Fort Hood. Dunkin Donuts, which shares the same location as Jimmy John's, also celebrated its grand opening.

Then Pvt. Keith Lovingfoss eats food from Jimmy John's in June 2015 during the grand opening of the eatery at the 19th Street Exchange at Fort Hood.

Brenda Burns and her son Adrian Burns, 12, eat food from Jimmy Johns and Dunkin Donuts Wednesday during the grand opening of the eateries at the 19th Street Exchange at Fort Hood.

FORT HOOD — As Cpl. Jamaar Crump patiently eyed the colorful Dunkin’ Donuts menu on a nearby wall Wednesday morning, about dozen other people stood in line in front of him.

Crump didn’t mind the wait. After all, this was Dunkin’ Donuts — hugely popular in his hometown of New York City — and before the donut shop opened up on post earlier this month, the nearest Dunkin’ Donuts was nearly 50 miles away in Round Rock.

“It’s my favorite name back home,” said Crump, who arrived at Fort Hood two years ago with the 36th Engineer Brigade. He and his wife live in one of the 12 housing areas on post.

Crump said the couple chose to live on post for the convenience of getting to and from work, and also the safety that Fort Hood provides. In the two years he’s been here, Crump said he’s noticed a number of new eateries open, including a Subway in the Clear Creek Post Exchange and a Jimmy John’s next to the Dunkin’ Donuts at the 19th Street Mini Mall.

Elsewhere on post, a Jack in the Box is set to open in September, and one of the largest post exchange’s in the world is scheduled to open at the end of August.

It’s all part of a growing trend in the all-volunteer military: provide for the families as well as the soldiers. And it goes well beyond the 30 eateries on post, which include Popeyes, Chili’s Grill & Bar, Captain D’s, Baskin-Robbins, Einstein Bros. Bagels and three Burger Kings.

A new $500 million hospital is expected to open later this year, and despite a troop population that has decreased in recent years, Fort Hood still maintains two commissaries, 21 retail stores and 84 long-term concession stores, which include everything from barber shops to small vendors selling board games, officials said. Schools, swimming pools, banks and a Holiday Inn dot the installation as well.

“We’re always trying to improve the quality of life for soldiers and families,” said Paula Gunderson, the general manager of Fort Hood’s Army and Air Force Exchange Service, which oversees the restaurants and retail stores on post, employing more than 700 people. Another 750 civilians work at the schools on post, and hundreds more work for Fort Hood’s Family, Morale, Welfare and Recreation, which is constantly organizing events from fun runs to full-blown rock concerts.

Gunderson said she and her staff are particularly proud of the two new eateries, Dunkin’ Donuts and Jimmy John’s, neither of which can be found in Killeen, Harker Heights or Copperas Cove.

In addition to increased amenities for soldiers and families, Fort Hood’s living quarters also have undergone changes in the past decade to keep up an evolving installation. More than 40,000 people live on post, including about 26,000 soldiers, spouses and children in post housing, and another 14,500 soldiers living in barracks, officials said.

The scores of wooden barracks built during World War II are gone, replaced by college-dorm-like structures.

In the various housing areas on post, the old “cookie-cutter,” vinyl-sided duplex units are being phased out, as modern dwellings replace outdated structures.

“It’s unique that we’re here in this setting with all of the amenities for the children, as well as the adults. There’s just a lot of things to do on post, and if you’re active military, you have access to all of that,” said Mack Quinney, Fort Hood Family Housing project director.

For on-post resident and Army spouse Melanie Morris, living on the installation provides convenience for her family of four.

“It’s easier for us on post because we only have one car. We live near the commissary, so it’s easy for me just to walk over there,” she said.

After living off base during a previous assignment at Fort Hood two years ago, Morris said access to all of the activities for her and her two children made the decision to live on post this time a good one for her family.

“They do offer a lot of stuff here, (including) some things we would not go to if we lived off post. We would not just drive on post for everything,” she said.

Since privatizing in 2001, much of the old housing at Fort Hood has undergone extensive renovation, and many new homes have been built, part of an ongoing initiative to update the housing inventory, Quinney said.

“The effort is to replace some of our older inventory and put us in a more competitive arena with the outside,” Quinney said.

But shiny new features aren’t the only amenities that attract Army families to on-post living, as opposed to looking off base. It’s a sense of unity with others who live through the same challenges of a military life that keeps occupancy high at Fort Hood Family Housing. Quinney said 95 percent of the 5,552 on-post housing units are occupied.

“The way we look at it, we want to offer a living environment that’s conducive to the military. That’s a little different than what you find outside the wire. There’s a camaraderie that’s here that’s not necessarily outside,” he said.

“Most of these people know who their neighbor is. They know their neighbor down the street. They’re in the same unit, those kinds of things. It’s a different environment, and we need to foster that environment because that’s unique to the military.”

Part of the “experience” Quinney refers to are services unavailable through many off-post homes and apartments, such as 24-hour free maintenance, access to pools and fitness centers and regular community events, hosted by Fort Hood Family Housing.

“It’s the experience. We’re trying to provide a living environment conducive to the military mindset and military member. We’re on post and have the opportunity to do that. I think that’s necessary because that’s what our service members expect.”

Retired Gen. James Thurman, who commanded the 4th Infantry Division when it was headquartered at Fort Hood, said many of the changes seen at Fort Hood, and other large military installations like it, are based on “generational” changes, and that comes from when officials ask the soldiers what they’d like to see on post.

“There are generational changes. We’ve got an all-volunteer force. We have families. And the whole point is: Why does somebody want to serve? … In today’s society, I think it is important that we offer things to our soldiers,” said Thurman, who retired out of Fort Hood in November 2013. He now lives in the Salado area.

Having the “right mix and the right variety for our soldiers and their families” is a good thing, Thurman said, adding that mix can be a careful balancing act. Having more amenities on post keeps soldiers from having to travel farther, he said.

“Having that right balance, rather than traveling around all over the place, kind of makes sense to me,” he said.

Thurman said he spent most of his 39 years in the Army living on post, and preferred it that way.

“One, it’s safe. And, two, there was access to facilities our children could be part of,” he said.

Fort Hood spouse Kathlene Haire, 32, said her husband is close enough to walk to work from their on-post home. The couple and their four children also are close to one of the post’s commissaries and the new Dunkin’ Donuts, which Haire is a big fan of.

“The amenities have grown exponentially,” he said.

Pvt. Keith Lovingfoss, a 3rd Cavalry Regiment infantryman who arrived at Fort Hood in May and lives in the barracks, said he didn’t expect to see a Dunkin’ Donuts or Jimmy John’s on post. But last week, he sat at a table eating a Dunkin’ Donuts breakfast sandwich and drinking a Vanilla Bean Coolatta.

“It’s not an everyday thing, but it gives you a break,” he said, adding food in the dining hall can get a little old.

39,400: Number of military personnel assigned to Fort Hood in May

40,500: Number of soldiers, spouses and children who reside on Fort Hood

14,500: Number of soldiers who live in barracks on post