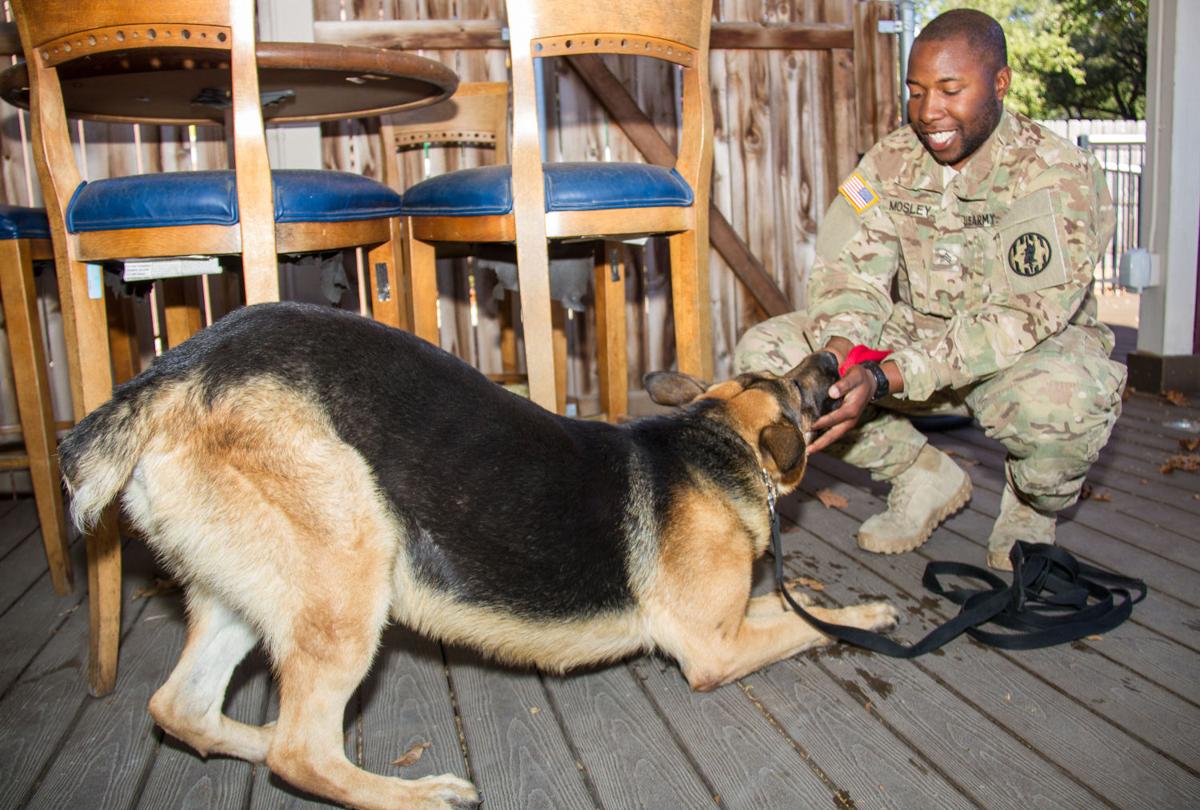 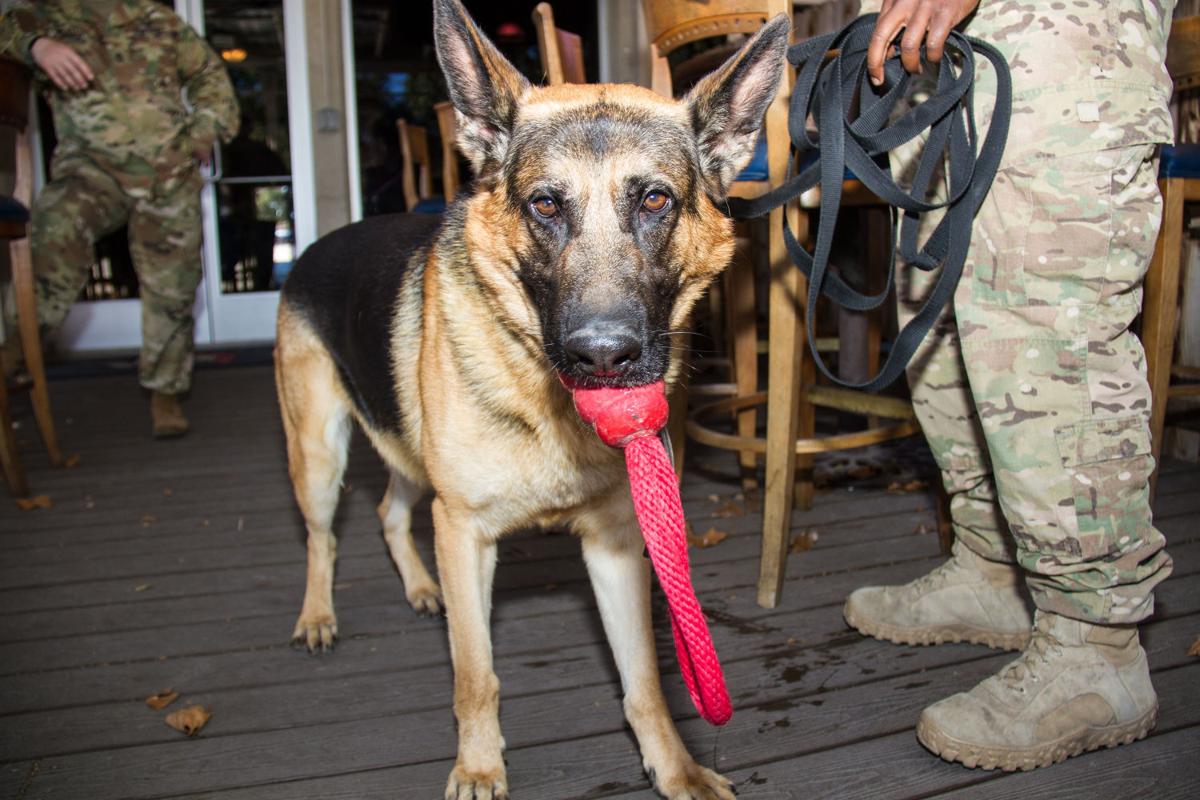 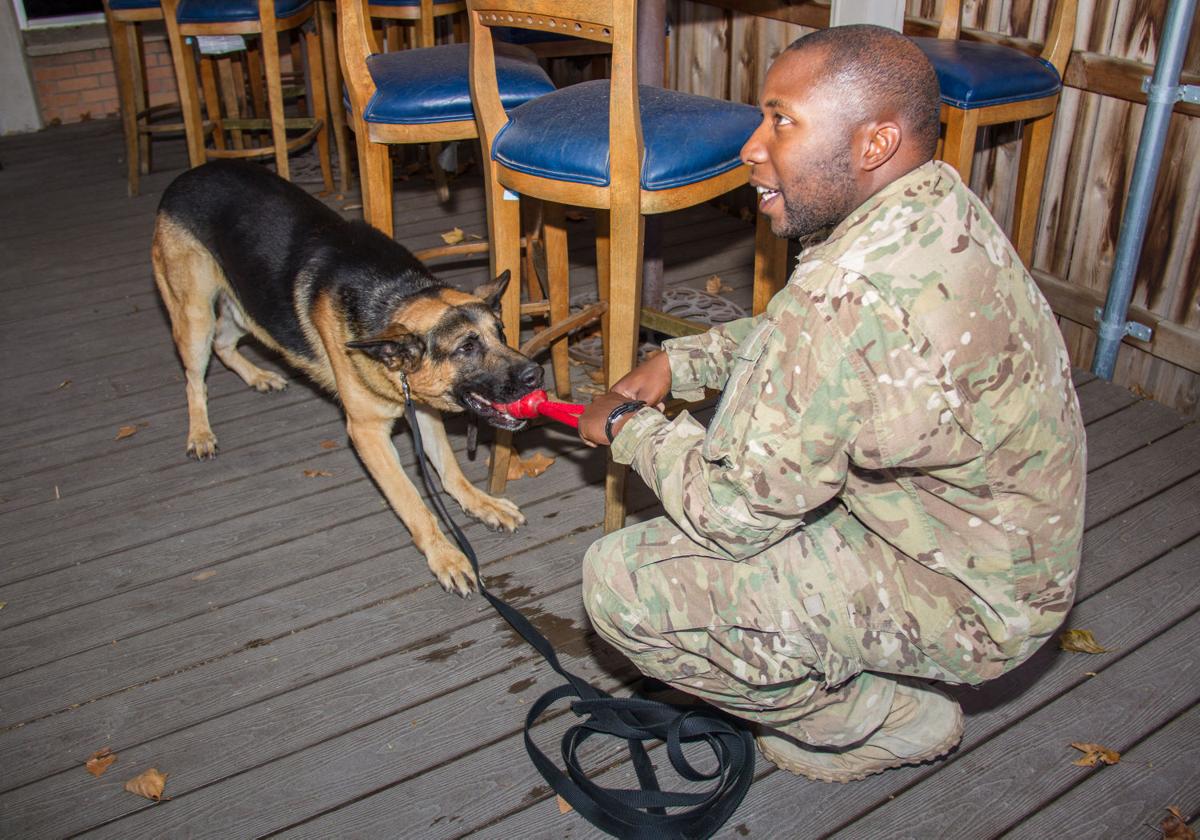 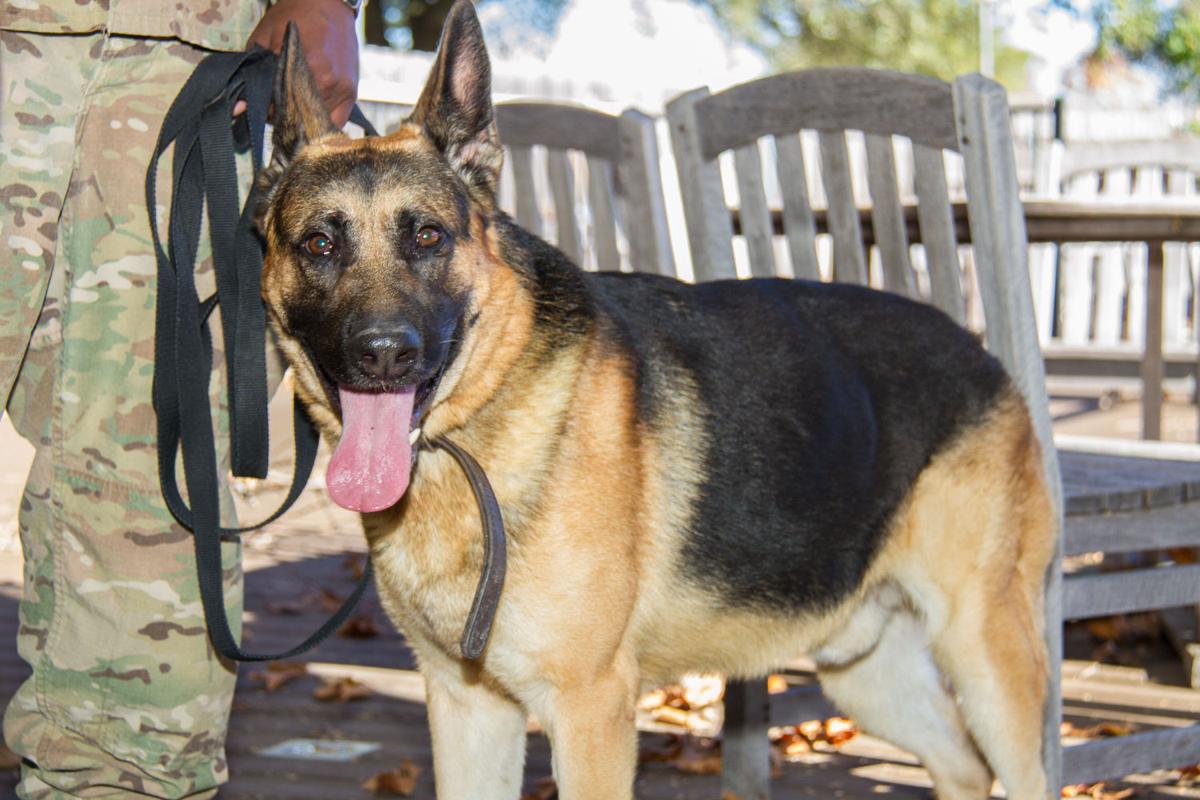 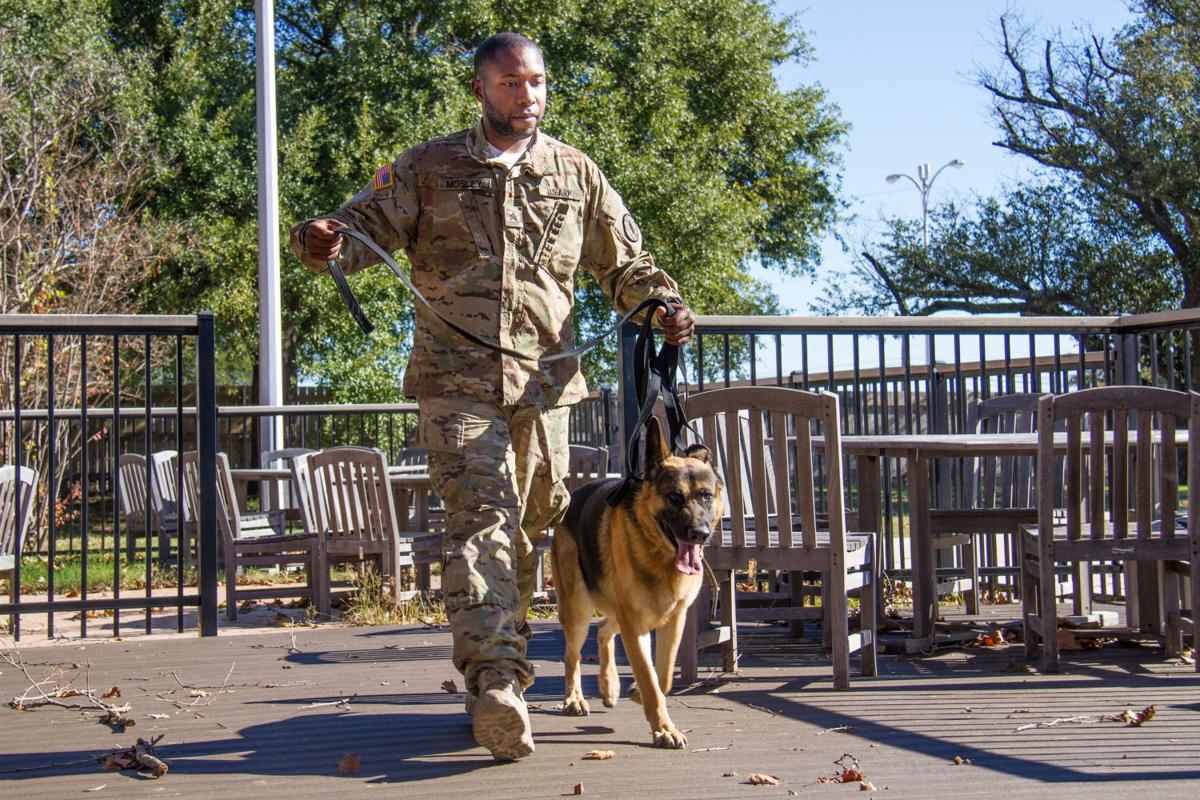 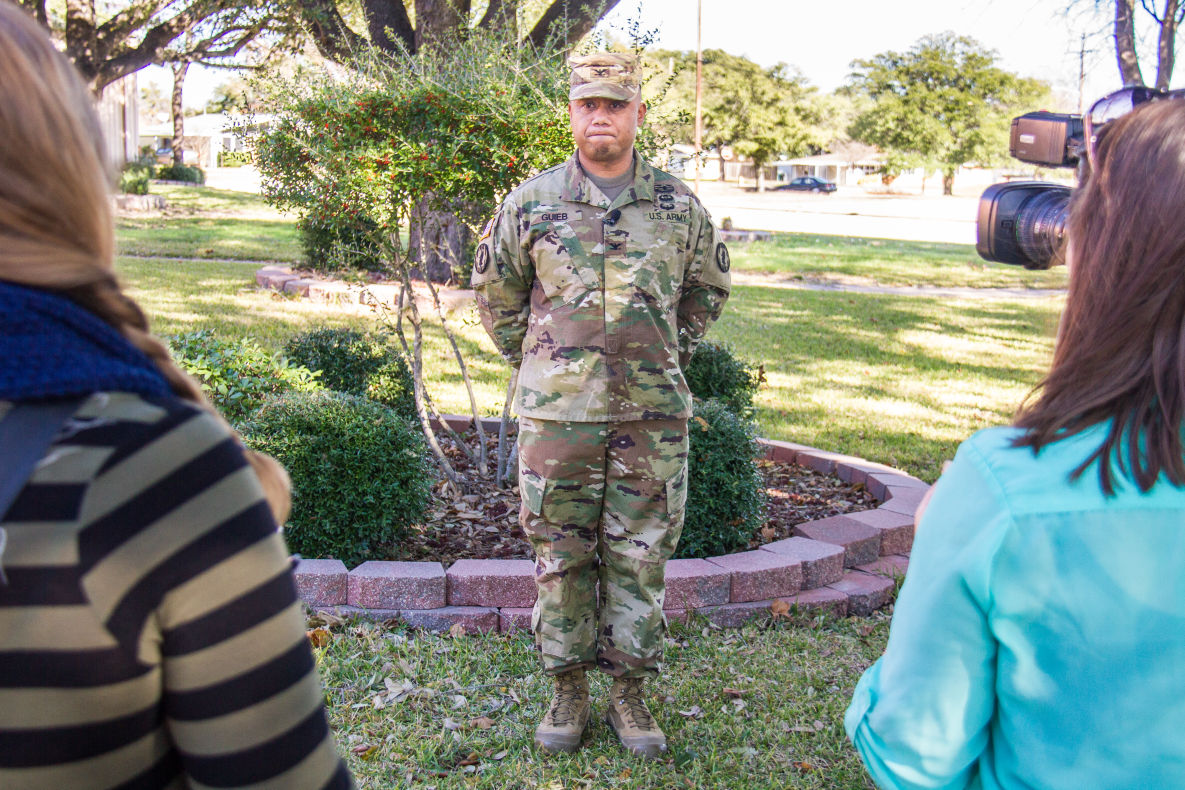 COL Ross Guieb, 89th Military Police Brigade commander at Fort Hood, talks with reporters about military police dogs and the recent injuries Spc. Andrew Brown and his dog Rocky sustained when a bomb exploded injuring them in Afghanistan. Spc. Brown is a Fort Hood Soldier with the 89th MP BDE. 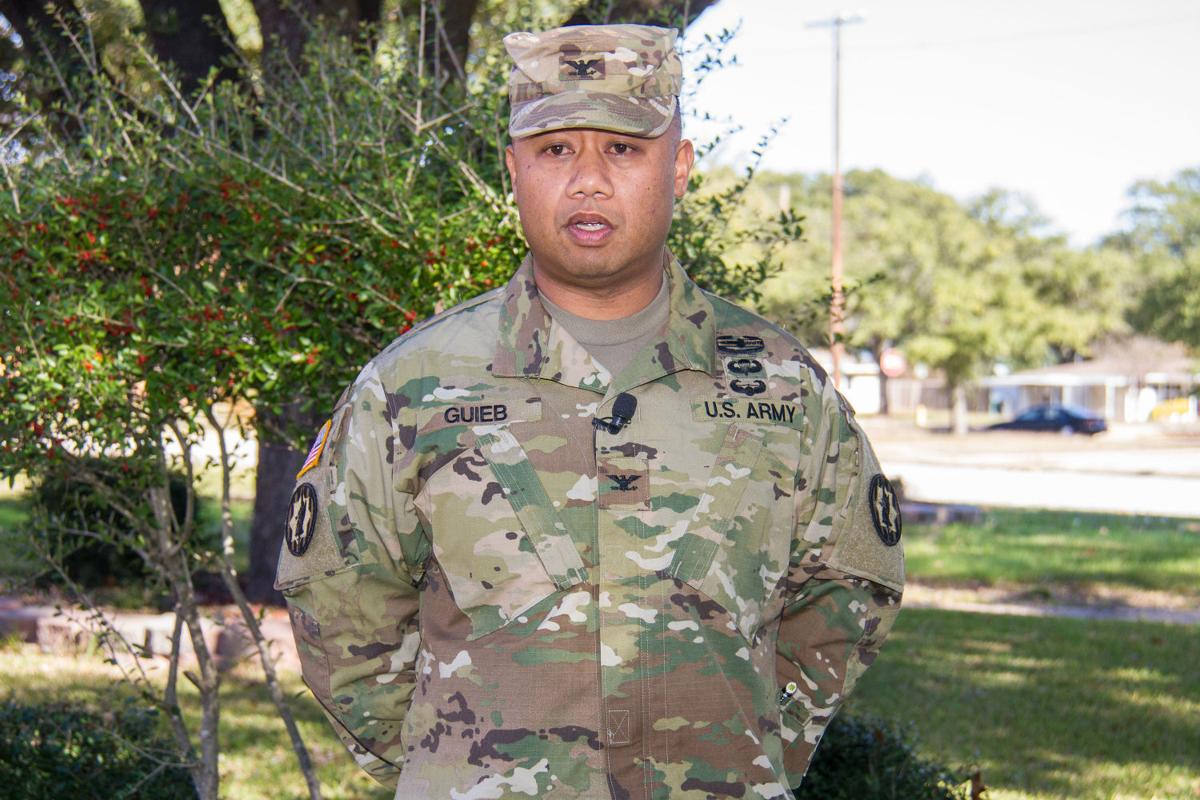 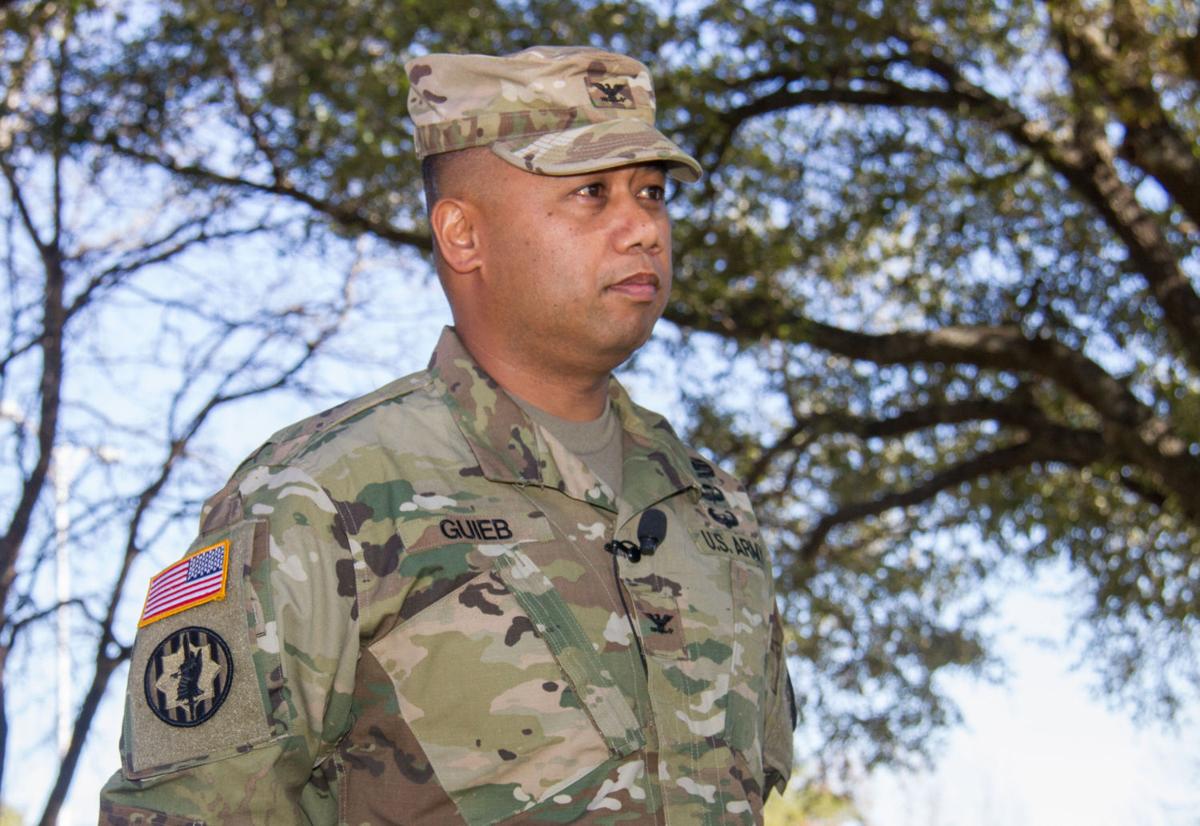 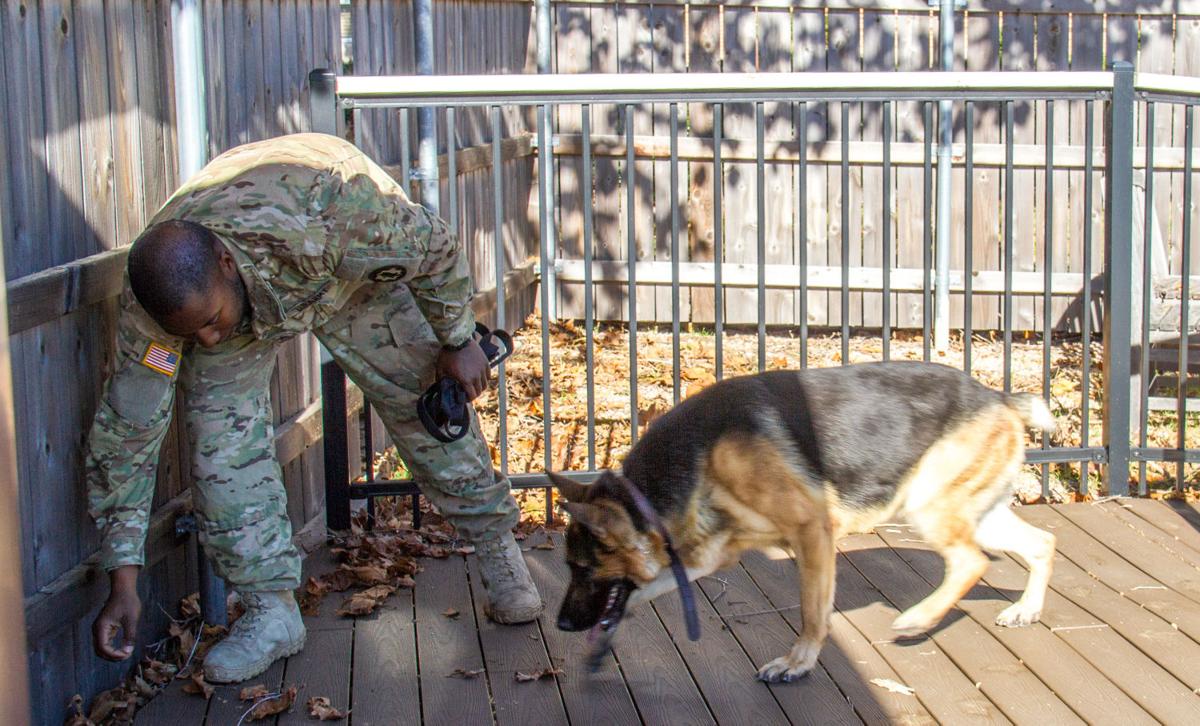 COL Ross Guieb, 89th Military Police Brigade commander at Fort Hood, talks with reporters about military police dogs and the recent injuries Spc. Andrew Brown and his dog Rocky sustained when a bomb exploded injuring them in Afghanistan. Spc. Brown is a Fort Hood Soldier with the 89th MP BDE.

FORT HOOD — Both injured in Afghanistan, a military working dog and his handler from Fort Hood’s 89th Military Police Brigade are expected to both make a full recovery, the brigade commander said Monday.

A photo of the injured dog wearing a Purple Heart Medal in a hospital in Germany went viral last week.

Spc. Andrew Brown, 22, and his military dog, Rocky, were searching a structure for explosive materials in southern Afghanistan’s Helmand Province on Dec. 3 when the bomb exploded, officials said.

“They were on a specific mission looking for explosive devices; that was at the point where they were injured due to an IED,” said Col. Ross Guieb, the commander of the brigade.

Military dogs are an essential facet of any mission, he said, as they can cover larger distances and function as “combat multipliers because they prevent the injuries from happening to others.”

The soldier and dog survived the blast and were taken to a military hospital in Germany.

In an interview with reporters at Fort Hood on Monday, Guieb said the bond

between a dog and his handler is a special one.

“The bond between a military working dog and their handler is probably one of the strongest bonds,” he said. “They are like any other partner, sometimes they don’t see eye to eye, but at the end of the day I think that the bond is very strong.”

The brigade showcased some of its soldiers and their dogs training at Fort Hood Monday.

“You get to the point when training these dogs where sometimes you spend more time with them than you do your family,” Mosley said. “They end up becoming family. … I trust him with my life.”

“I think they (Brown’s family) are overwhelmed with support in talking with them,” Guieb said.

Brown has since been taken to Walter Reed Army Medical Center in Washington, D.C., for treatment and rehabilitation. The dog is still in Germany. As soon as he is stable he will return to the United States to continue his rehabilitation Guieb said.

Brown, originally from Eliot, Maine, is being treated for non-life threatening injuries. He will also undergo a series of tests for traumatic brain injury, which is routine for soldiers injured by roadside bombs. He joined the Army two years ago.

The bomb also caused shrapnel wounds and a broken leg for Rocky.

“I know there was a lot of concern on basically trying to put a stabilizing piece into the back hind leg, but it seems right now it will be a full recovery,” Guieb said.

Brown will receive a Purple Heart for the injury. He and Rocky were deployed from Fort Hood on Oct. 26, and were attached to the unit in Afghanistan.

After both dog and soldier are healed, the brigade plans to reunite the two at Fort Hood.