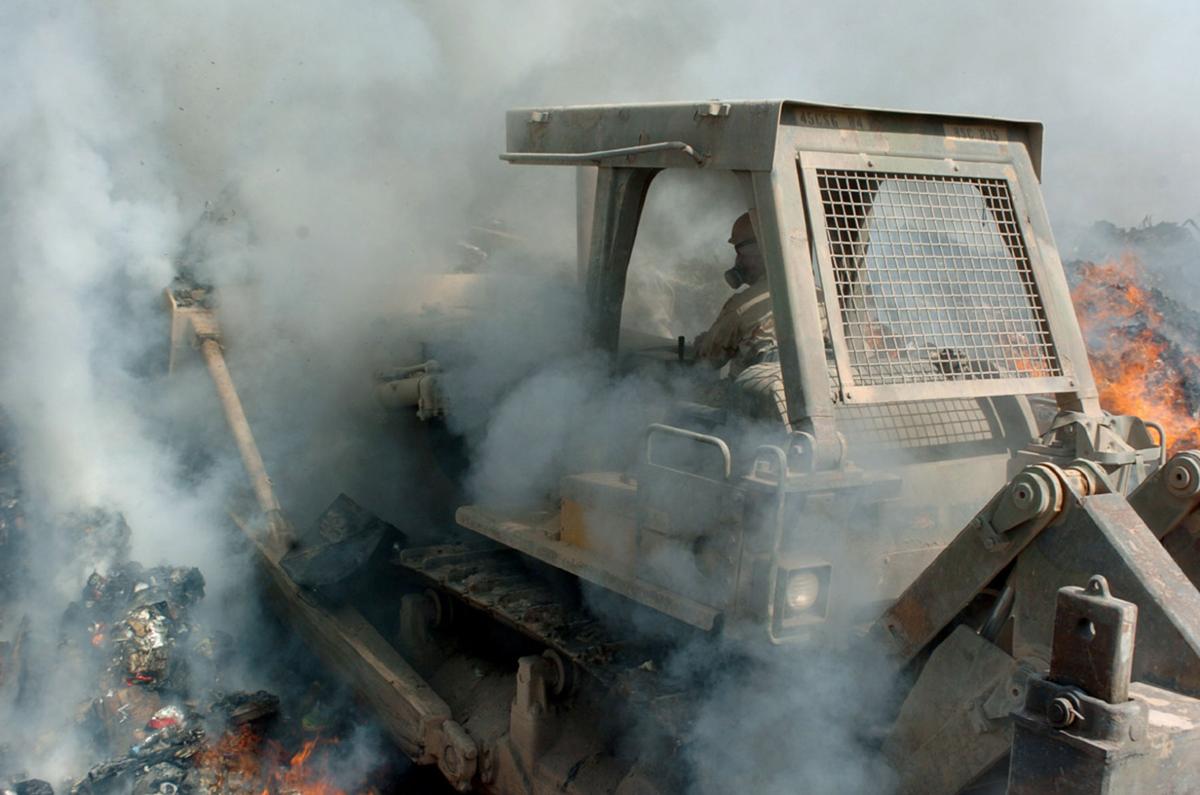 Smoke billows in from all sides as Sgt. Richard Ganske, 84th Combat Engineer Battalion, pushes the bulldozer deep into the flames of the burn pit in Balad, Iraq to keep burnable items constantly ablaze, disposing of them so they do not clutter up the post in September 2004. Bulldozers and excavators are the heavy equipment used by the engineers to manage trash at the burn pit. 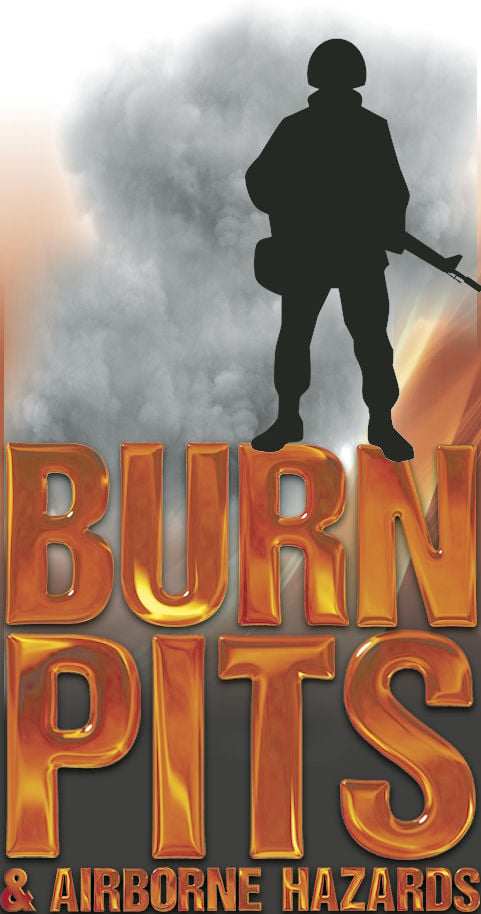 Smoke billows in from all sides as Sgt. Richard Ganske, 84th Combat Engineer Battalion, pushes the bulldozer deep into the flames of the burn pit in Balad, Iraq to keep burnable items constantly ablaze, disposing of them so they do not clutter up the post in September 2004. Bulldozers and excavators are the heavy equipment used by the engineers to manage trash at the burn pit.

There is some good news for veterans suffering from illnesses from their deployments to Southwest Asia: Some members of Congress are taking notice and working to get them and their families the assistance they need.

While the bills still need to pass the full Congress before being signed into law by the president, congressmen such as U.S. Rep. Joaquin Castro, D-San Antonio, say broad support from both the Republican and Democratic parties on behalf of the nation’s veterans is offering some measure of hope for the future.

H.R. 1001 would allow family members of service members who have died from illnesses and cancers believed to be linked to exposure to the trash-burning pits to update the Veterans Affairs Airborne Hazards and Open Burn Pits Registry with their service member’s death and cause.

H.R. 1005 would allow for constrictive bronchiolitis to be considered presumed as service connected to exposure to open burn pits while deployed by the VA for care and benefits.

More than 3.7 million active-duty service members and veterans have been exposed to the toxic smoke from trash burning pits while serving in areas such as Iraq and Afghanistan during the War on Terror, and many of them are getting sick with illnesses and cancers they can’t explain.

Burn pits were used to destroy plastics, batteries, medical waste, ammunition and everything in between. They were a common way to get rid of waste and helped ensure some items — such as military uniforms and items that could potentially be used against military troops — did not fall into enemy hands. Burn pits have been in use in Southwest Asia since August 1990 at the beginning of Operation Desert Shield and used throughout the wars in Iraq and Afghanistan.

“As the top Republican on the VA Appropriations Subcommittee, I’ve been working to address burn pit issues through the appropriations process, including providing $10 million for burn-pit related research in the last year. I anticipate that additional funding will be made available in the FY20 legislation for research too,” Carter said in an email.

“The Burn Pit Registration is a critical tool for researchers and it’s imperative to track veterans that are experiencing symptoms linked to burn pits. As the bill stands, I would vote for the Family Member Access to Burn Pit Registry Act, to give family member’s the ability to participate in the registry on behalf of a deceased veteran. The more research we have access to, the better we can address this issue,” Carter said.

Castro has been proactive with his work on burn pits exposures issues, actively seeking input from his constituents.

“I just did three different town hall (meetings) in three different cities — San Antonio, Corpus Christi and in the (Rio Grande) Valley, all on burn pits,” said Castro, whose district contains roughly 60,000 veterans. “After the San Antonio event, I visited with a veteran named William Garza. He was really on the verge of death. His family was there and they told me his story — I came back a few days later because they said he was really about to pass away, and visited with him that night. I think it was a Sunday night. The next day he passed away. He was 38.”

It was the stories such as Garza’s — a former U.S. Marine Corps corporal — from his veteran constituents which got Castro involved in making sure veterans exposed to the toxic smoke from burn pits while deployed could get the care they need, he said.

“I just believe that we need to make sure we don’t ignore the medical conditions of our veterans the way Agent Orange conditions were ignored for Vietnam veterans,” Castro said. “We’re trying to do everything we can to make sure this generation doesn’t get that same unfair treatment and foot dragging. In the meantime, there are people suffering and people who are dying, because they are not getting the care they need. It’s a work in progress, and we still have a long way to go, but I feel like there is a lot of momentum to get this done.”

Nonprofit organization Burn Pits 360 has been working closely with Castro on the bills. The organization maintains its own registry, which already allows family members to update their service member’s information, has more than 600 veterans with cancer listed in it already, said Rosie Torres, co-founder of the nonprofit. A registry for those who died on the website, burnpits360.org, lists more than 100 deaths across the nation: More than 90 of those deaths were from the cancers — the rest were veterans with cancer who committed suicide because of it.

“I am originally from San Antonio, born and raised,” Torres said. “The district I live in now (Corpus Christi) at the time was not supporting any of our efforts or veterans affected by burn pits. So we decided to reach out to his office since we had veterans also affected in his district.”

The two bills Castro introduced were originally submitted for draft by the nonprofit, she added.

“H.R. 1005 makes the most sense to introduce as a presumptive, since it is the one disease that requires a very invasive open-lung biopsy that consists of a chest tube and a three-day stay in the hospital,” said Torres, whose husband, retired Capt. Leroy Torres, suffers from the disease. “(This) means the amount of veterans diagnosed with (constrictive bronchiolitis) is low.”

Constrictive bronchiolitis causes the smallest airways in the lungs, known as bronchioles, to swell, making it difficult to breathe, according to the National Institutes of Health. It can lead to chronic respiratory failure and, in severe cases, death.

Castro is joined in his efforts to pass legislation on behalf of veterans by California Congressman Dr. Raul Ruiz, D-Desert Palms. Ruiz was approached by members of his own district and was able to look at their medical records from a physician’s point of view.

“We must act now to help our burn pits exposed veterans and service members,” Ruiz said in August 2018 after President Donald Trump signed the National Defense Authorization Act for Fiscal Year 2019 into law. “I’m an emergency physician and public health expert, and in public health and in medicine it is practice that if there is a high enough suspicion of a harm that causes a severe enough illness, then we need to act on that suspicion. Remove the harm, treat the person.”

Castro said acquiring timely VA presumption for illnesses and cancers other than constrictive bronchiolitis will most likely require additional legislation by Congress.

“We’re just trying to cut down on that time process here. It’s still tough — in some ways it feels like we’re repeating what happened before with getting the VA to recognize illnesses caused by Agent Orange,” he said. “I would ask people to come forward if they believe they have been affected, or if they have a loved one living or passed away who was affected. It’s important for everyone to come forward so that we have a better understanding of the conditions people are dealing with, and so people can pursue justice and fair medical care.”

Castro and Ruiz will be hosting a congressional briefing on burn pits in Washington, D.C. on April 30, to discuss how the toxic wounds of war are affecting veterans, current issues and how Congress and the medical community can work together to improve the lives of veterans who served in Iraq and Afghanistan.

“I do think the VA is coming around on the burn pits issue, but we’ve got to get this legislation through,” said Castro, who served in the Texas Legislature for 10 years prior to becoming a U.S. Representative in 2013. “Not just my legislation, but the other legislation that’s out there. We’ve got to get it passed. The federal legislative process is just a lot slower compared to Austin — not just for this issue, but any issue. And that’s on a bipartisan issue.”

Torres said she is looking forward to the congressional briefing and bringing to light the issues facing veterans exposed to toxic airborne hazards during deployments.

“There is a cloak of shame and someone needs to wear it,” she said. “Congress must remind the VA and (Department of Defense) that these war heroes honored their oath; now it’s time for them to honor theirs. This is pretty much our mantra for the briefing in April.”

For more information on the congressional briefing and current proposed legislation, visit burnpits360.org.

VA: Research into airborne hazards on veterans moving along, but veterans needed

It has been more than 18 years since the beginning of the War on Terror, and since then, millions of American fighting men and women were expo…