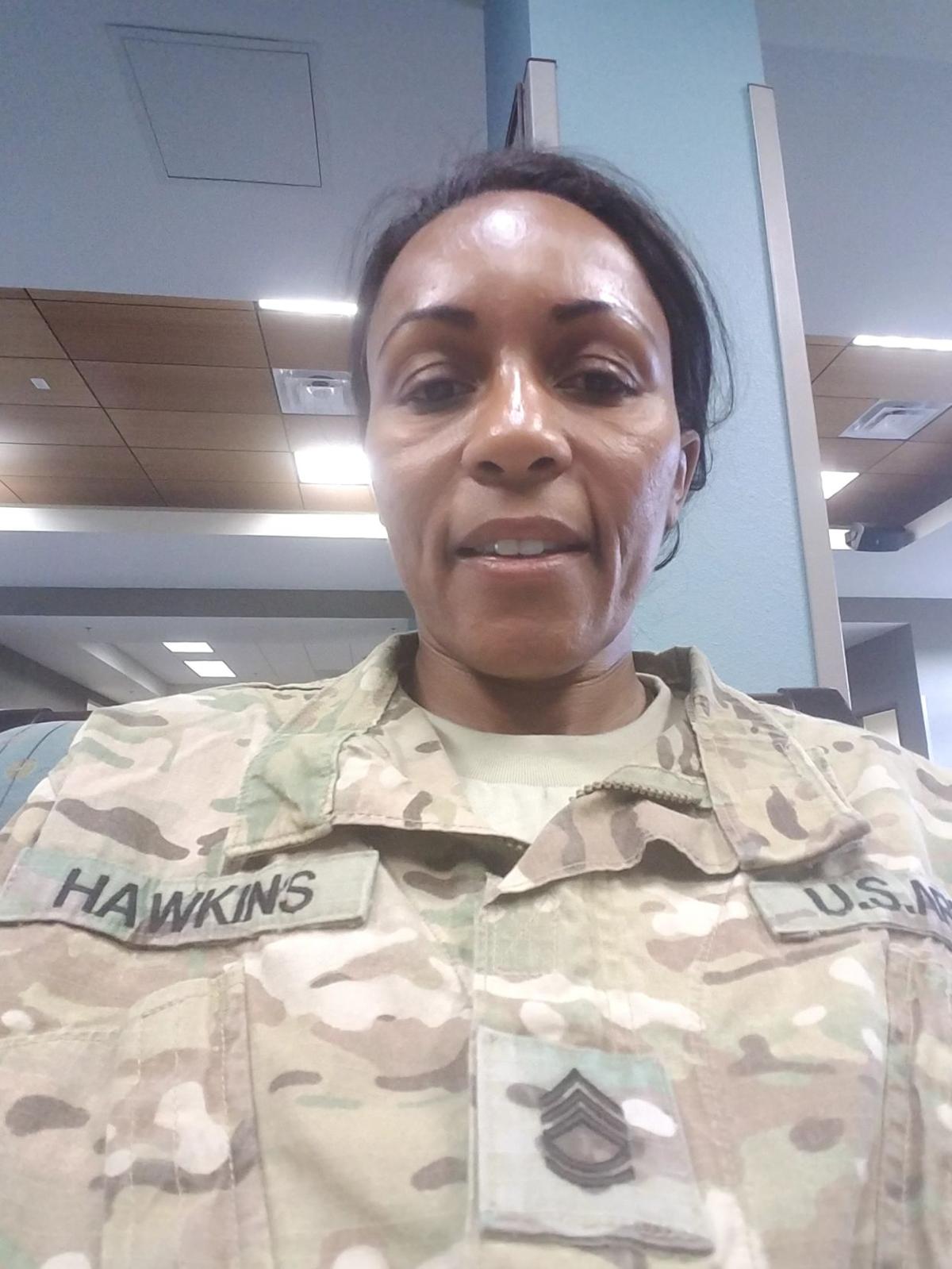 Then-Sgt. 1st Class Caroline Hawkins Blaze was home on military leave, June 2, 2016, when she received a phone call informing her a training accident claimed the lives of eight of her soldiers and a West Point cadet when their cargo truck overturned during a flash flood that day at Fort Hood’s Owl Creek. 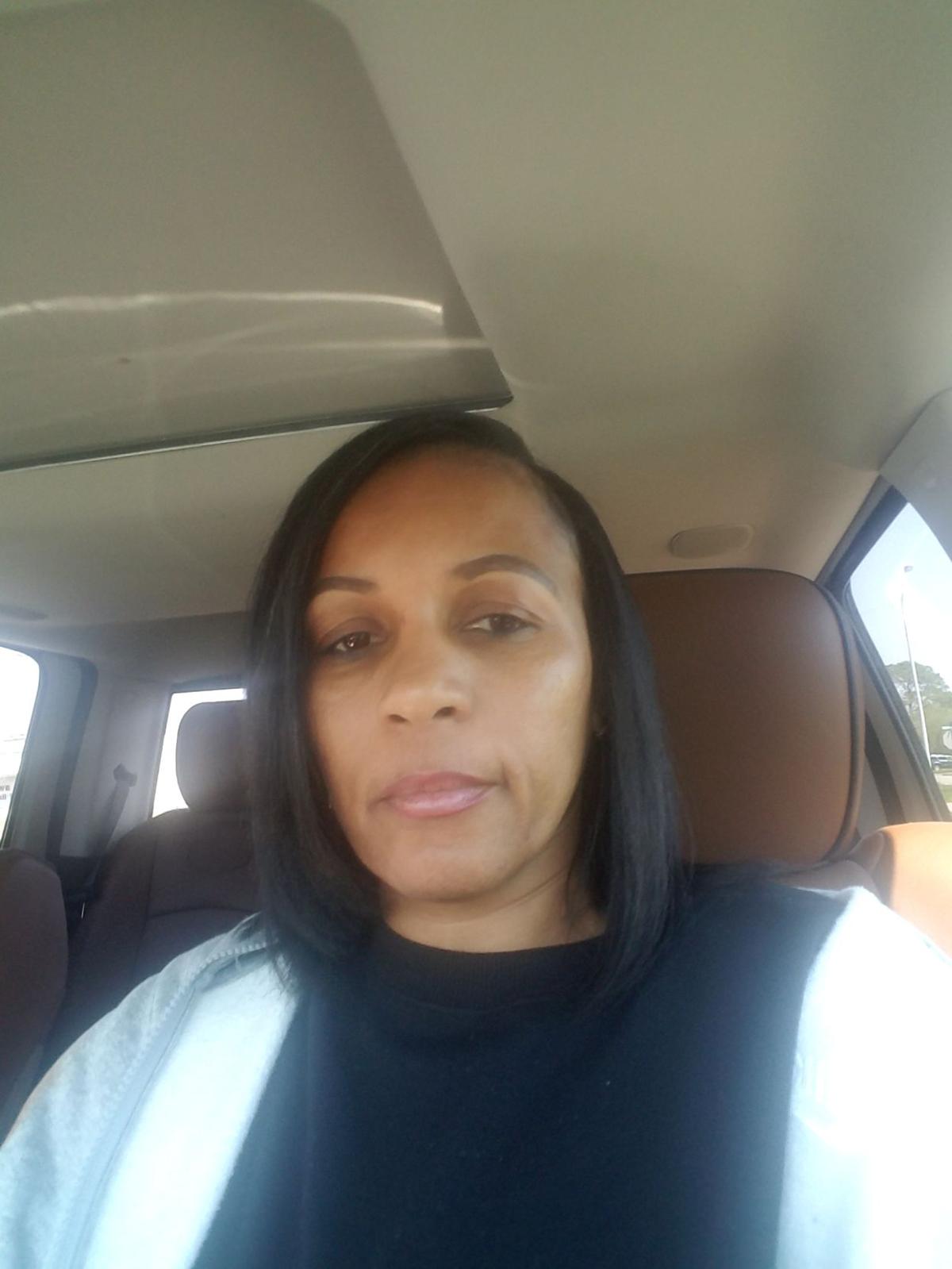 Caroline Hawkins Blaze, now retired after serving 20 years in the military, was one of three leaders in her unit who were recommended for punishment in the unit investigation report, known as an Army Regulation 15-6 investigation, for negligence. 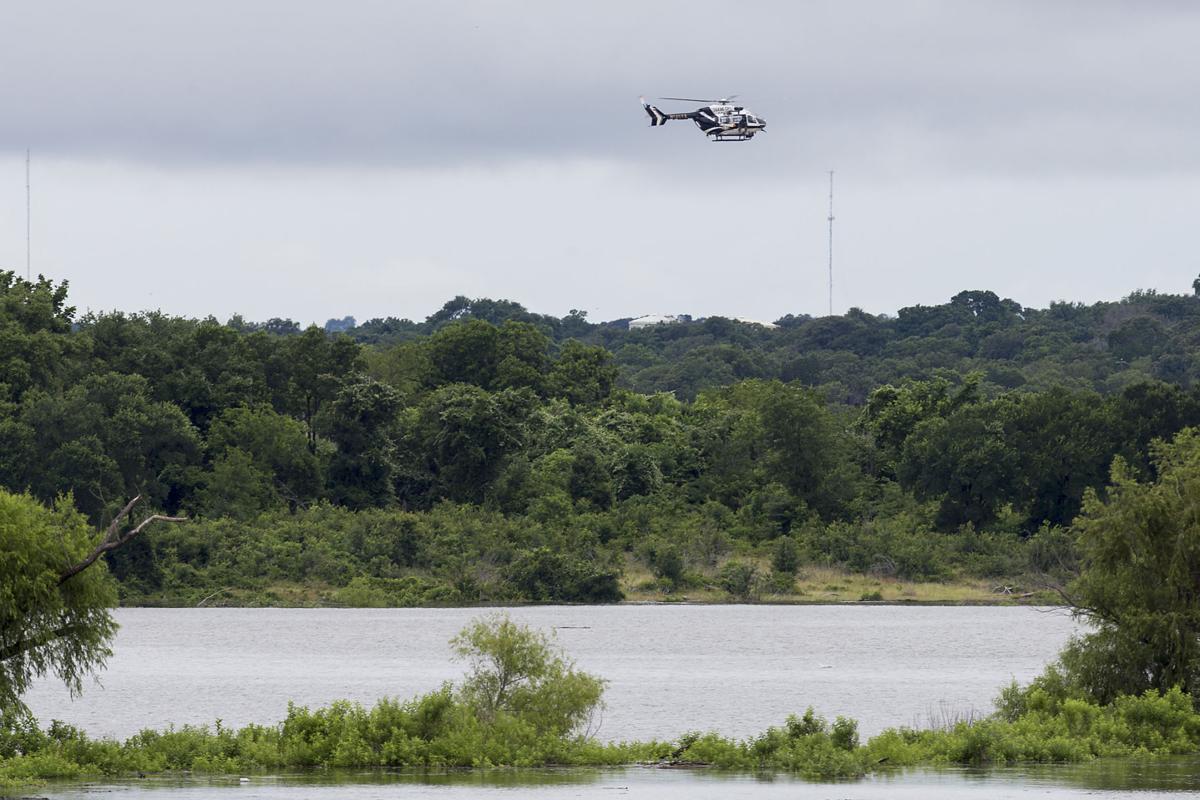 FILE - A Texas DPS helicopter flies over Lake Belton near the scene of the accident at Fort Hood at Owl Creek Park in Gatesville on Thursday, June 2, 2016. 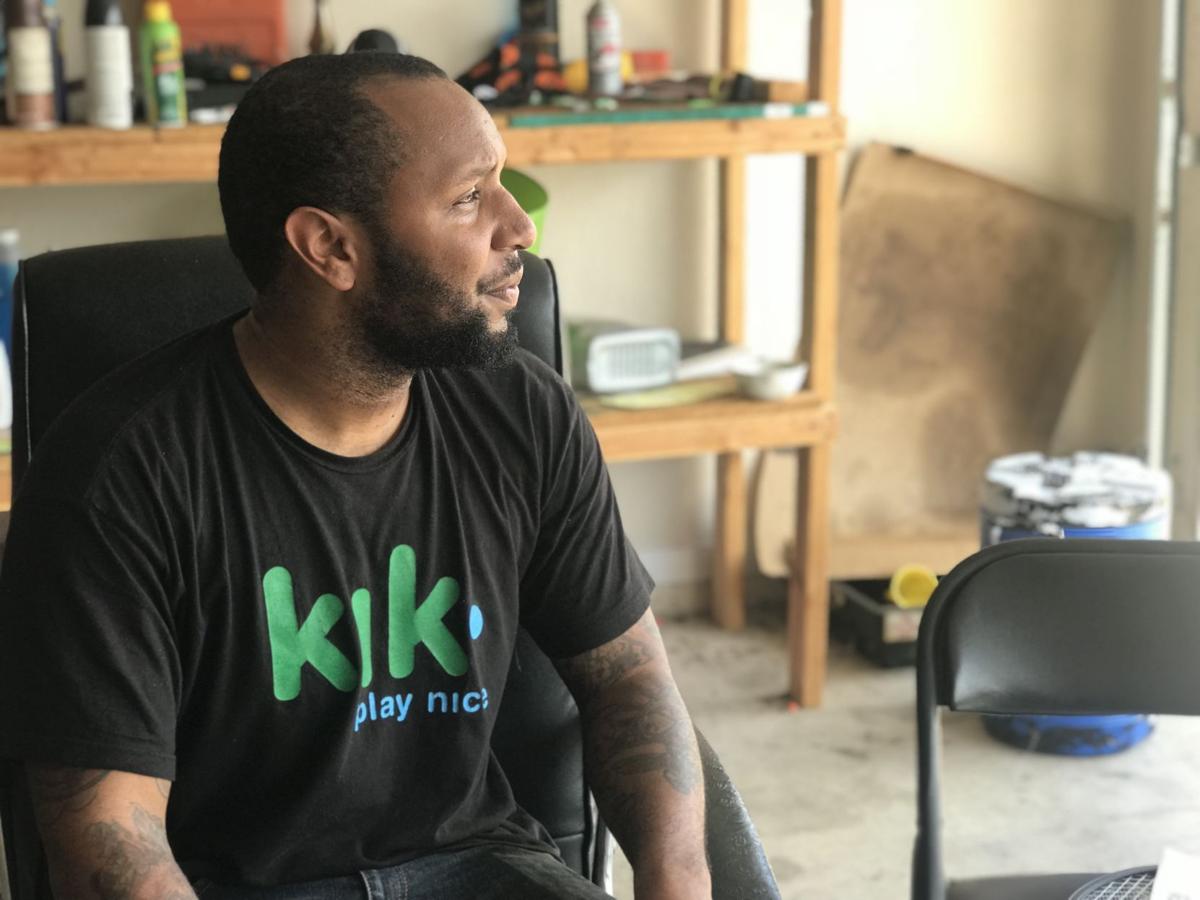 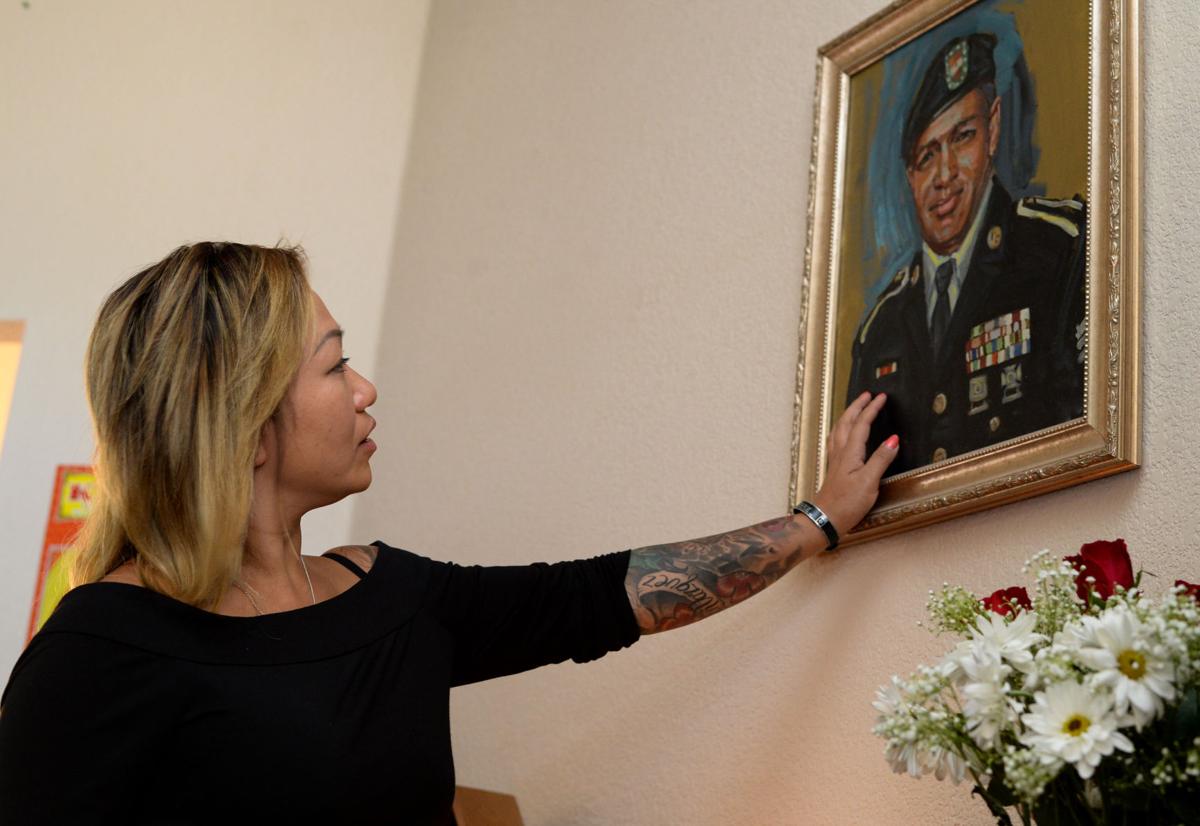 Wife of fallen Staff Sgt. Miguel Colonvasquez, Ngo T. Pham, touches an oil painting of her late husband on Thursday, May 25, 2017, at their home in Killeen. 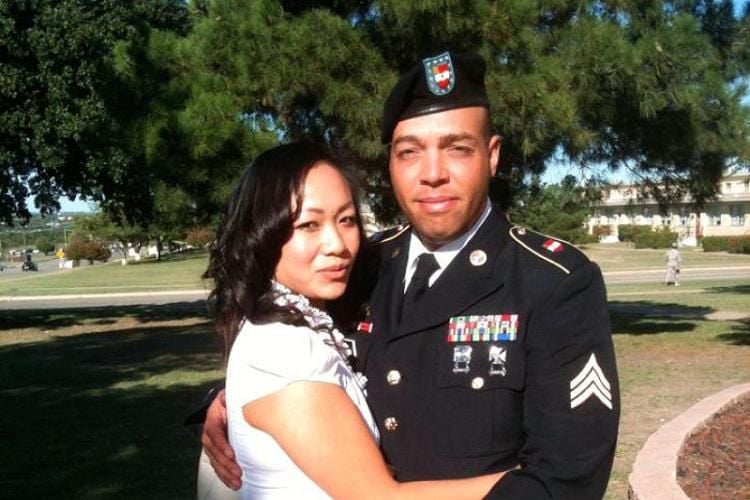 Ngo T. Pham, left, is the widow of Staff Sgt. Miguel Angel Colonvazquez. Colonvazquez died in an accident on Fort Hood on June 2, when the Army truck he and the others were in overturned while crossing Fort Hood’s Owl Creek during a flash flood. Pham is currently disputing the results of the investigation into the accident, which placed most of the blame on her husband.

FILE - A Texas DPS helicopter flies over Lake Belton near the scene of the accident at Fort Hood at Owl Creek Park in Gatesville on Thursday, June 2, 2016.

Wife of fallen Staff Sgt. Miguel Colonvasquez, Ngo T. Pham, touches an oil painting of her late husband on Thursday, May 25, 2017, at their home in Killeen.

Ngo T. Pham, left, is the widow of Staff Sgt. Miguel Angel Colonvazquez. Colonvazquez died in an accident on Fort Hood on June 2, when the Army truck he and the others were in overturned while crossing Fort Hood’s Owl Creek during a flash flood. Pham is currently disputing the results of the investigation into the accident, which placed most of the blame on her husband.

Then-Sgt. 1st Class Caroline Hawkins Blaze was home on military leave, June 2, 2016, when she received a phone call informing her a training accident claimed the lives of eight of her soldiers and a West Point cadet when their cargo truck overturned during a flash flood that day at Fort Hood’s Owl Creek.

Blaze, now retired after serving 20 years in the military, was one of three leaders in her unit who were recommended for punishment in the unit investigation report, known as an Army Regulation 15-6 investigation, for negligence.

Blaze, along with the platoon leader and company commander were recommended for a General Officer Memorandum of Reprimand, according to Blaze and information in the accident investigation report.

In her role as platoon sergeant, Blaze would have been integral to planning and conducting training at the platoon level. She said the training she had briefed to the command and had prepared for was different from what the soldiers eventually carried out that led to the deadly accident.

“I don’t know if it was sent up for approval or not. For the Army investigation, I had to submit my training calendar and training plan, and what I had submitted was still what I had planned before I had left.”

Blaze said she doesn’t remember exactly what the training was, but it was not convoy operations or low-water crossing.

Blaze said she asked the platoon leader if the soldiers were briefed prior to departure to avoid low-water crossings and implement the risk assessment used for every scheduled training event to minimize hazards such as inclement weather.

“He (platoon leader) started hollering ‘I told him not to go into low-water crossings!’ and started trying to blame Staff Sgt. (Miguel) Colonvazquez,” the senior noncommissioned officer who was conducting the training and also died in the rollover.

Blaze said that after returning from leave she visited with the survivors of the accident and with the remaining soldiers in her platoon.

Blaze said she spoke with the soldiers who participated in the training and was informed the platoon leader didn’t attend the briefing just prior to the vehicles departing the area.

“He was nowhere involved in regard to the training because he could have halted the training or elevated the risk assessment,” Blaze said. After heavy rains early that morning, the installation put out notice that tank trails and low-water crossings and training areas were closed.

Blaze said that info didn’t reach the soldiers in the platoon.

“That never came from higher so, there’s a lot of blame on the installation, the division, the brigade, battalion and then the company.”

The investigation states a leader whose name was redacted stated he/she “Ordered Staff Sgt. Colonvazquez to not go into the low-water crossings.” The investigation eventually concluded that the accident was preventable and happened because of a series of three successive decisions made by Colonvazquez.

“That 15-6 (investigation) was where the blame game was played,” Blaze said. “They charged me with neglect, stating that I failed to make sure my platoon was trained and licensed, but I wasn’t the training sergeant for drivers license. But because I was the platoon sergeant, it was put on me, the platoon leader and the company commander.”

Blaze said the drivers training program is at the battalion level to ensure all soldiers in each company are properly licensed.

Blaze said she feels blame should have been assessed higher up the chain of command and the installation for failing to implement controls that would have prevented the accident. She feels the reprimand she received was done in a manner as to quickly and quietly assess blame and close the case.

“Myself and the company commander had the time in service to retire, whereas the platoon leader did not,” Blaze said. “To me, it felt like they were trying to save his career but play the blame game, so they would have something to tell the parents (of those who died).”

Blaze said in the ensuing months, the atmosphere in the unit changed for the worse.

“I got called in and asked a few questions by the investigating officer and then came back and told me they were charging me with negligence,” Blaze said. “So, it was bad enough having to lose my soldiers and now they’re telling me I’m part to blame.”

Blaze said after that she was emotionally drained and didn’t want anything to do with the platoon leader who kept trying to lay blame on Colonvazquez.

“The whole thing was hard to process. I was angry, I was pissed off, and I didn’t know how they were going to charge me,” Blaze said. “All I knew was I was being charged and I was literally done with the Army.”

Blaze said she received a local general reprimand that stayed in her records for a year around the same time she was being processed for a medical retirement. She said she was never notified or saw the recommendation for her punishment and to this day she doesn’t know what was written about her.

Blaze said she even became suicidal and had a suicide attempt several months after receiving the reprimand.

“It was a bad time and a hard time. To say that I was at fault for these soldiers lives like I caused their death.”

Blaze retired from the Army in July 2017 and has recently started working as a warehouse distribution manager for a company in Beaumont, Texas. She said the events of that fateful day and the deployments she went on have led to battles with post-traumatic stress disorder, depression and anxiety.

She said she still maintains contact with some of the soldiers, survivors and Colonvazquez’ widow, Ngo T. Pham, through social media.

Pham and the father of Pvt. Isaac Lee DeLeon, who died in the rollover, have talked to the Herald.

The DeLeons came from San Angelo to Killeen to visit the site of the fatal accident Saturday, as they did on last year’s anniversary. Ricky DeLeon, Isaac’s father, has also raised questions about the investigation.

DeLeon said he felt the investigation was scripted and made to fit to place the blame on Colonvazquez.

“As far as I understand it, they didn’t do a risk assessment and didn’t follow protocol at all,” DeLeon said.

The Army has declined the Herald’s past requests to comment on the accident saying it’s a personnel matter.

Survivor Kameron Robinson, like Blaze, is no longer in the Army and is free to speak. He described the accident to the Herald last week. Robinson, who had been riding in the back of the truck when it became flooded and then rolled over, said he and others had raised concerns about the flash flood warning before training that morning and told their platoon leader and Colonvazquez. Robinson said the platoon leader there said the training needed to go forward.

Robinson said Colonvazquez in the past, had fought against doing things he was uncomfortable doing but would follow the orders given to him.

Robinson, like Blaze, had questions about the thoroughness of the investigation. Robinson said investigators from the Army’s Criminal Investigation Division stopped by his hospital bed and asked two questions, then left. No one interviewed him after that.

Two investigations were done. The unit’s AR 15-6 was given to families, but not the public, despite a Freedom of Information Act request from the Herald. That report put most of the blame on Colonvazquez. The U.S. Army Combat Readiness Center at Fort Rucker did an investigation that it made public, but only after blacking out pages of information about its findings, including the cause. The Herald had requested and received that report and has since requested an unredacted copy of that report. The Army said it would be more than a year before it could consider the Herald’s request.

Pham, who has moved out of state, told the Herald last week she has lingering questions and concerns as she planned to honor her husband’s memory on the anniversary.

“She’s fighting for her husband’s name to be cleared, and it should be,” Blaze said. “I was in the Army a long time and anytime there’s a preventable accident when lives are lost, they relieve the whole chain of command. That didn’t happen. The blame went to the lowest level possible.”

On June 2, 2016, Kameron Robinson was riding in the truck that rolled over in flooded Owl Creek on Fort Hood, claiming the lives of eight sold…

Looks like there is a whole lot of a** covering going on. If the weather warning was put out, how come the road conditions didn't change for the training areas? Usually when a water crossing is closed, range control puts a blast message to the post which water crossings are closed. If the PSG is on leave, that means somebody other than her was in charge (When someone "takes charge" that means they take on the duties AND RESPONSIBILITIES of the element they are assigned). It's Leadership 101 but in this case of upper level a** covering, that's out of the question. Sad.